In 1926, Phillip M. Lovell was what is now known as a guru of healthy living, Schindler and instructed the project to a beach house where you can enjoy the healthy climate in California.

Phillip Lovell has the uniqueness of his client’s two houses canonical modernism, both bear his name, the first was the Lovell House on the Beach and the second the rest of Lovell House, built barely a year later after being and finished first by compatriot Schindler, Richard Neutra.

Schindler was always interested in the techniques of economic construction, and although it managed to carry out economic projects is also very true that many of his works have not reached to this day for the same reason. Lovell’s house on the beach is within the exceptions to be one of his earlier works and still work with durable materials.

Both the house and its surroundings have been experiencing changes followed from the time of its construction.

Notably, in 1926 differed from the four exterior materials of four different colors on the walls and the concrete for the five pillars of the porch entrance and its corresponding jácenas, the white coating, the blue for the trim and Forged bottom that covers the porch, and glass. Today however, the concrete is no longer significant, as it has been coated in white like the rest of closings. The same applies to the beams and joists of the roof of the porch, which has changed its tone blue on white. With these changes the image of the house has become much more unified, something not entirely consistent with the ideas of Schindler wanted to distinguish the structure of the box housing to achieve the effect that the second fleet above the usual level, looking These healthy and pleasant breezes that their valued customer.

As for the environment can be said that the site in the wild that was the house in 1926 has ido domesticating and subject to the laws of urbanism. While contact with the house before the beach was direct, now we have to save a street by moving motor vehicles, with their sidewalks and parking places.

Schindler Lovell’s house was situated on the beach at Newport, one of the few beaches in Los Angeles to the south.

As we said Phillip Lovell was a guru of healthy living, and therefore your home must reflect that lifestyle.

To achieve this sense of safe spaces, be good, Schindler decided to raise the house of the land. He built a large concrete structure placed on it and a white box spaces that stay in the house.

Since plant height of the house feels as if it were an isolated world. Noise from the street are but a distant murmur, and if we contemplate the view from the inside does not have any visual connection with the ground or the street or the beach are visible, all you see is the line of the distant horizon over the sea.

This species of tree in the cabin also benefits from the pleasant breezes that arrive directly without any obstruction due to the altitude. All rooms of the house have openings to the outside to facilitate the ventilation of such spaces, a toilet that was already present in the work of many modern architects as Le Corbusier.

The program of the house is simple and is divided into three floors.

The ground floor at street level, is completely open, as if it were a direct extension of the surface of the sea (at least in 1926), even where there are areas covered with sand for children’s games. This level is also parking and a shower that can wash before entering the house, so this does not convert the interior into a space filled with sand and dirt.
The first meters of the ground floor leading from the front porch of a large double-height entry, starting from the two staircases, one with a very gentle slope and the other with a rather steep slope. The first carries the day the main floor, while the latter leads directly to the service area, which is also accessible by a staircase located on the third front opposite (east).

On the main floor is the day of housing together with services and units of service.
From north to south are placed, the room service along with a bathroom and removing the stairway leading to the upper floor, kitchen, dining area and finally a large living room that enjoys this part of the facade, western part of the facade under the porch and across the south side with direct views over the beach through a large balcony on this front..
The continuous space of the lounge and dining area is characterized by being pierced by a gateway corridor that corresponds to the distribution of rooms on the upper deck.

Already on the top floor is the area at night.
Four rooms are placed followed by another one along the corridor that overlooks the dining room on the lower floor. Each has a covered terrace on the west facade that allows mixing with the outside atmosphere, and even sleep in them during the hot summer nights without anything to healthier air conditioning machines.
A large bathroom complete this floor to service the four rooms.

Five bays of 5 meters wide, with pillars and reinforced concrete jácenas form the main structure of the house. Each bay has three gateways of 5 meters of light, separated from them 5 and 7 meters. The strip of 5 meters is the area of the porch on the ground floor and balconies of the rooms on the upper floor, while that of 7 corresponds to the width of the interior spaces of the house.

The light from jácenas saved by wooden beams that were placed on the tables (also timber) in the forging of successive floors.

The materials are mainly used, the reinforced concrete for the main structure, the wood for the forged, aluminum and glass enclosures and the parties to revoke white opaque. 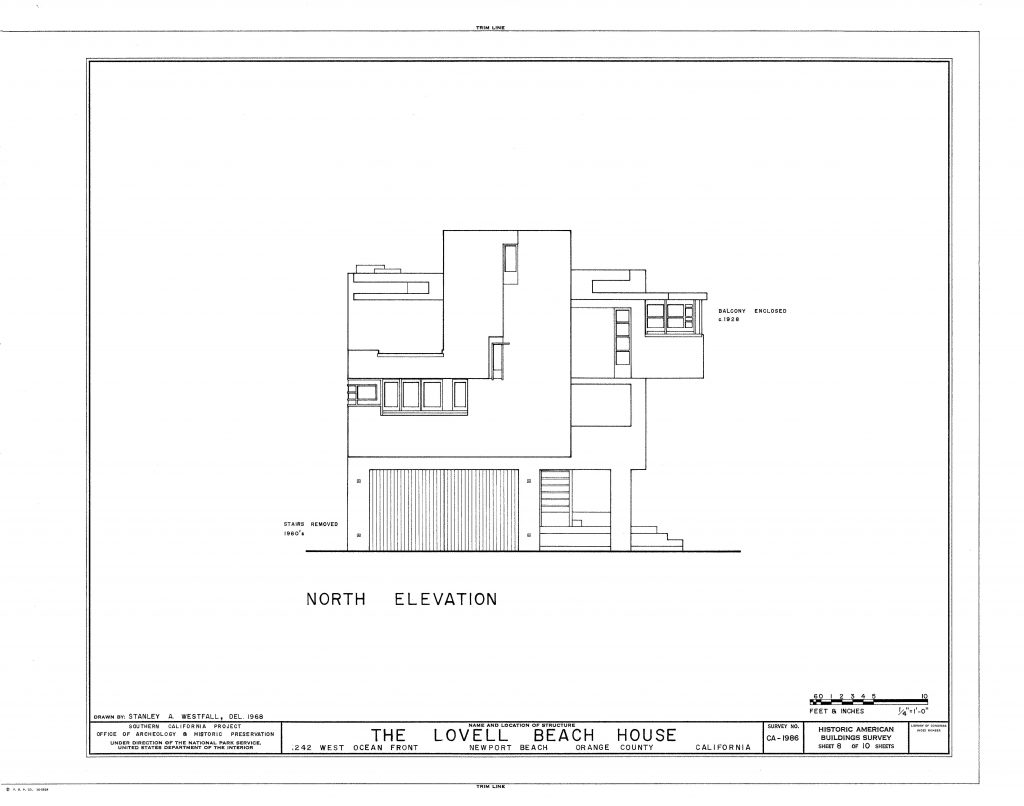 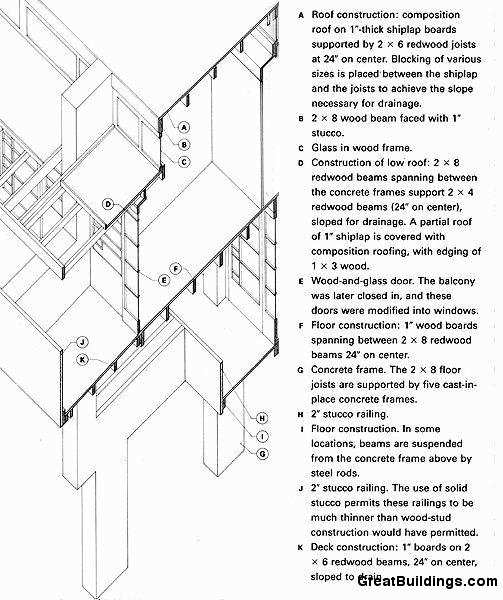 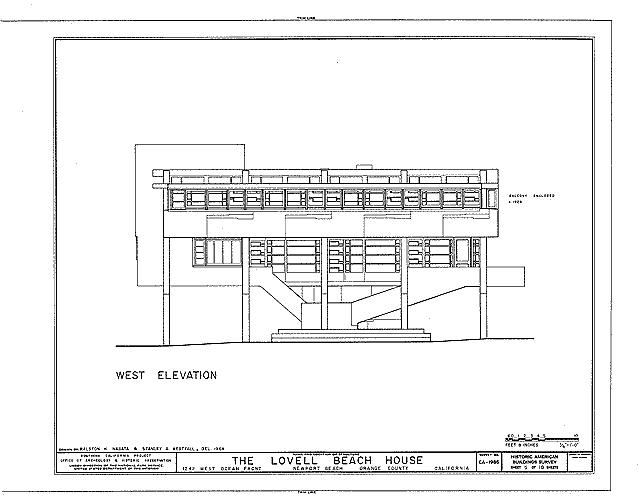 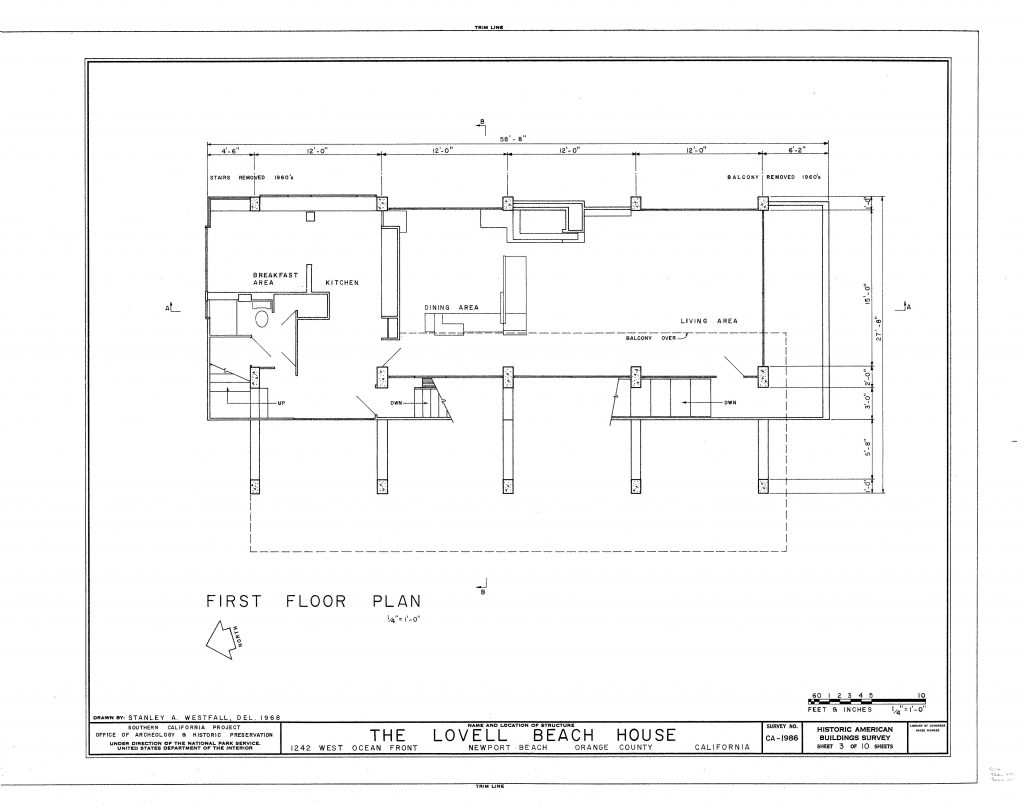 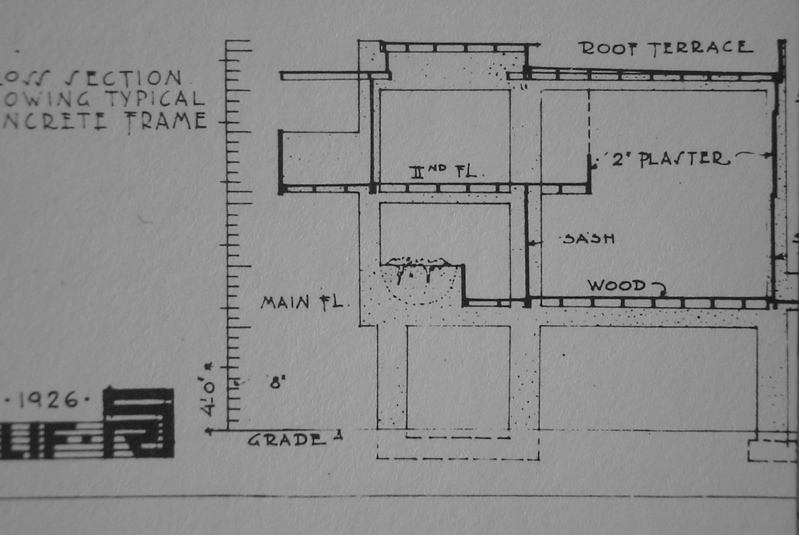 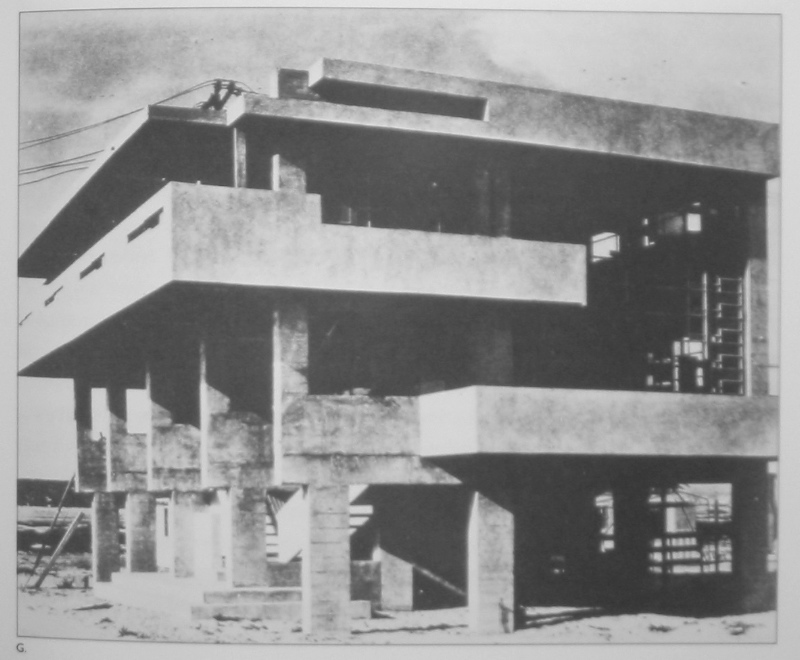 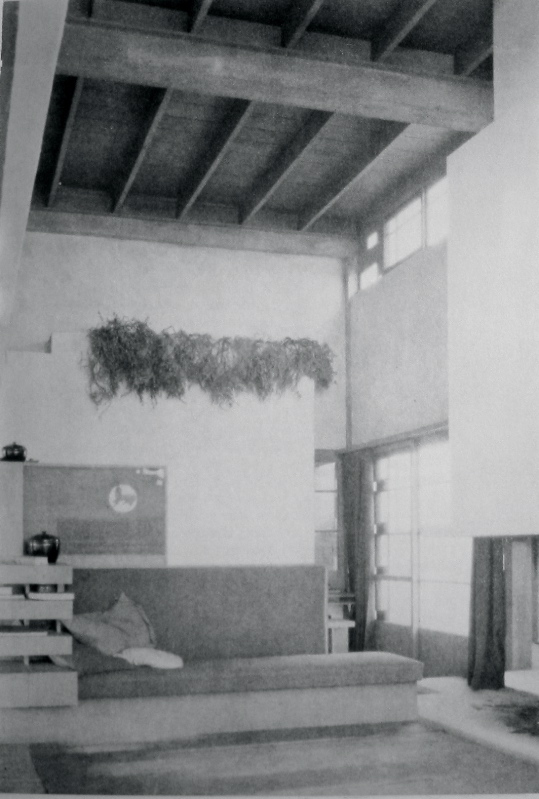 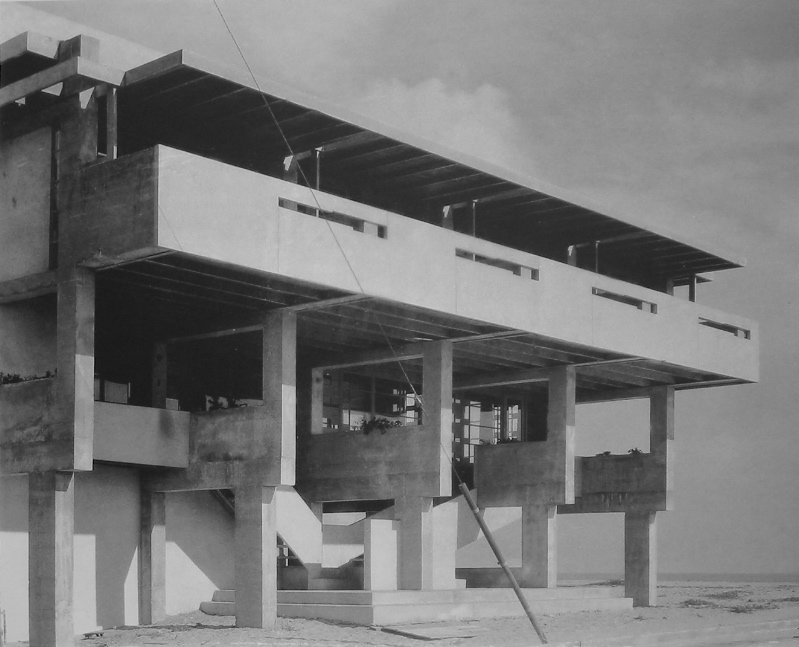 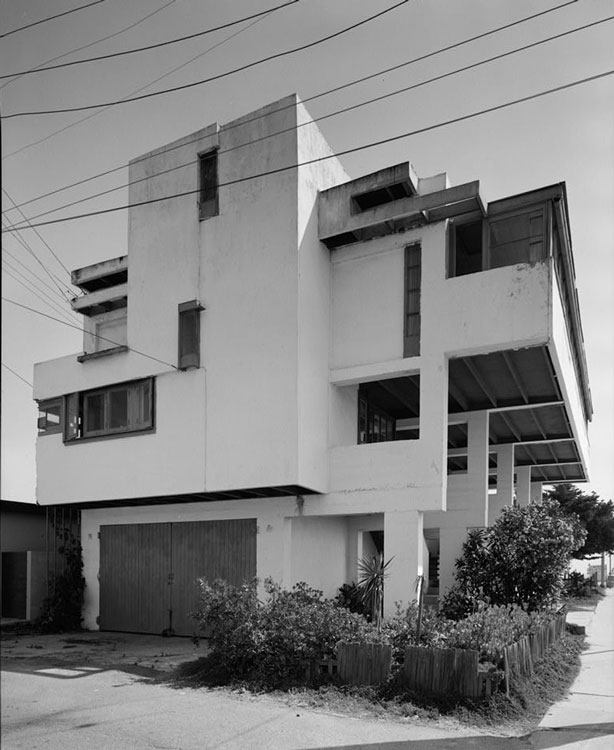 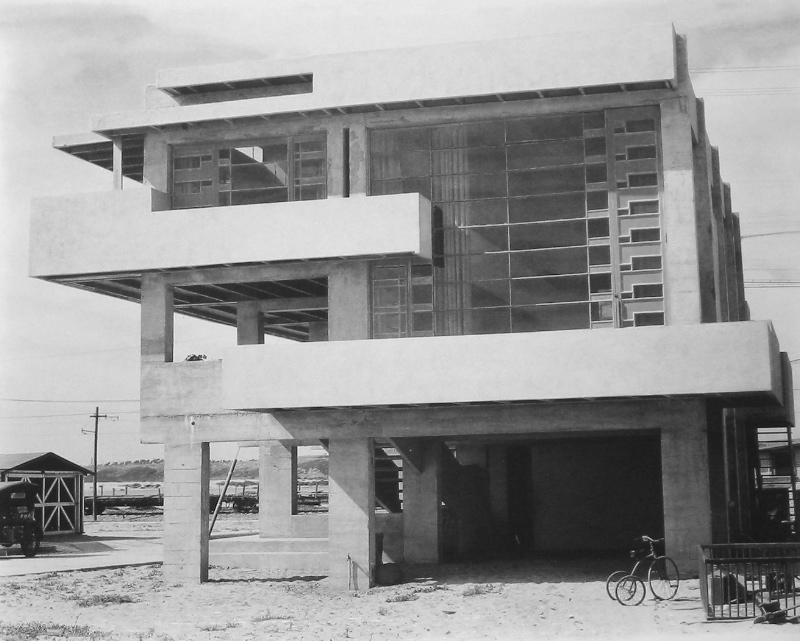 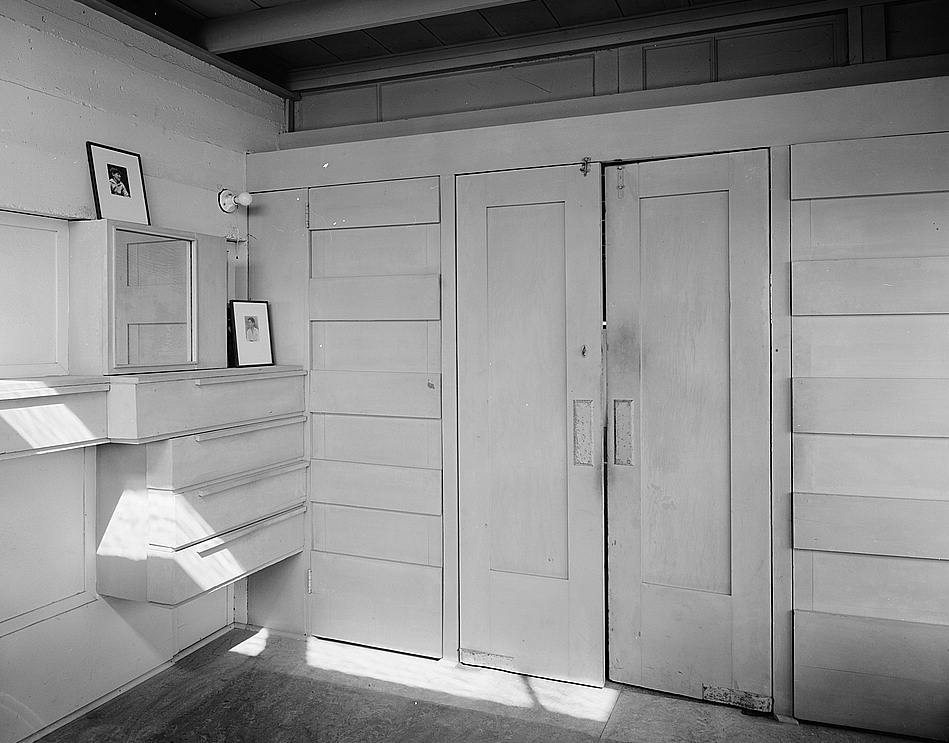 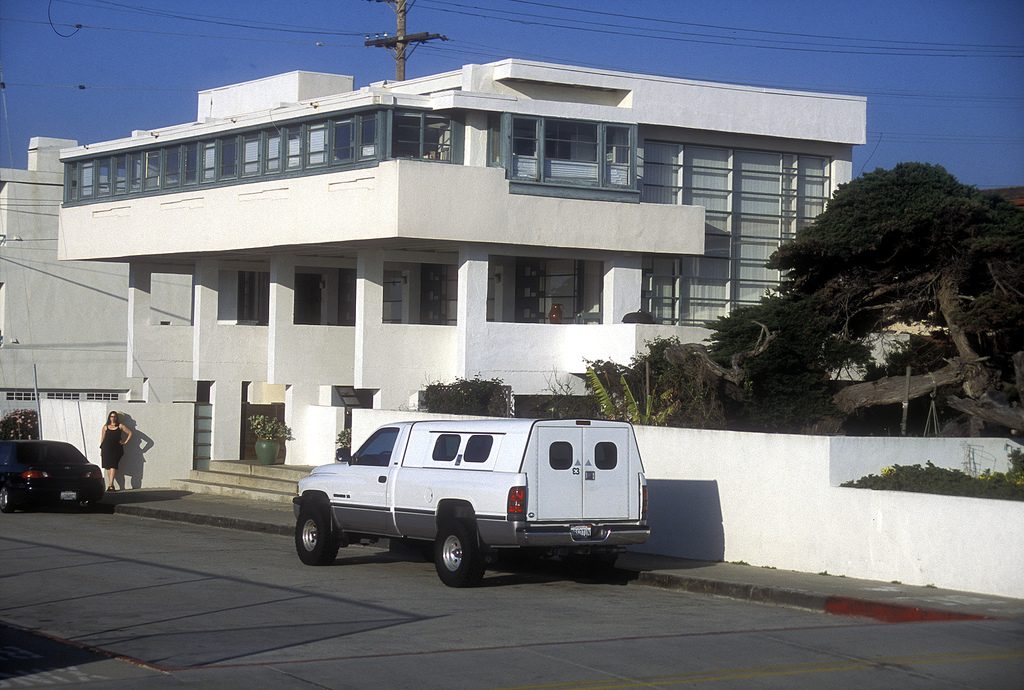 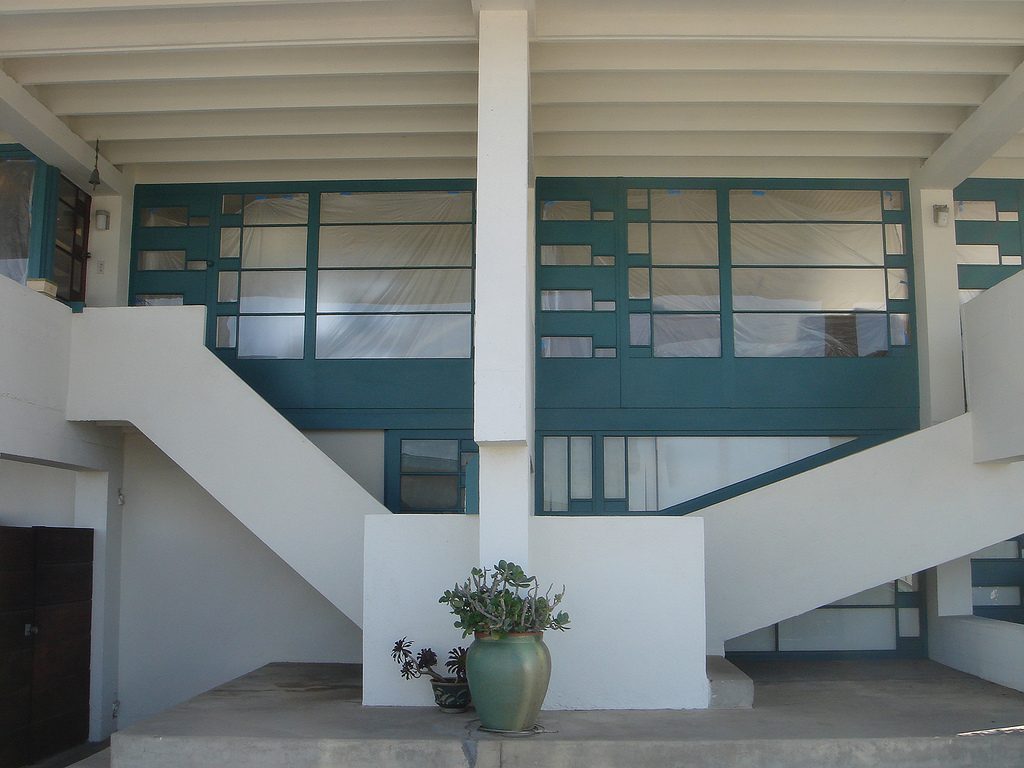 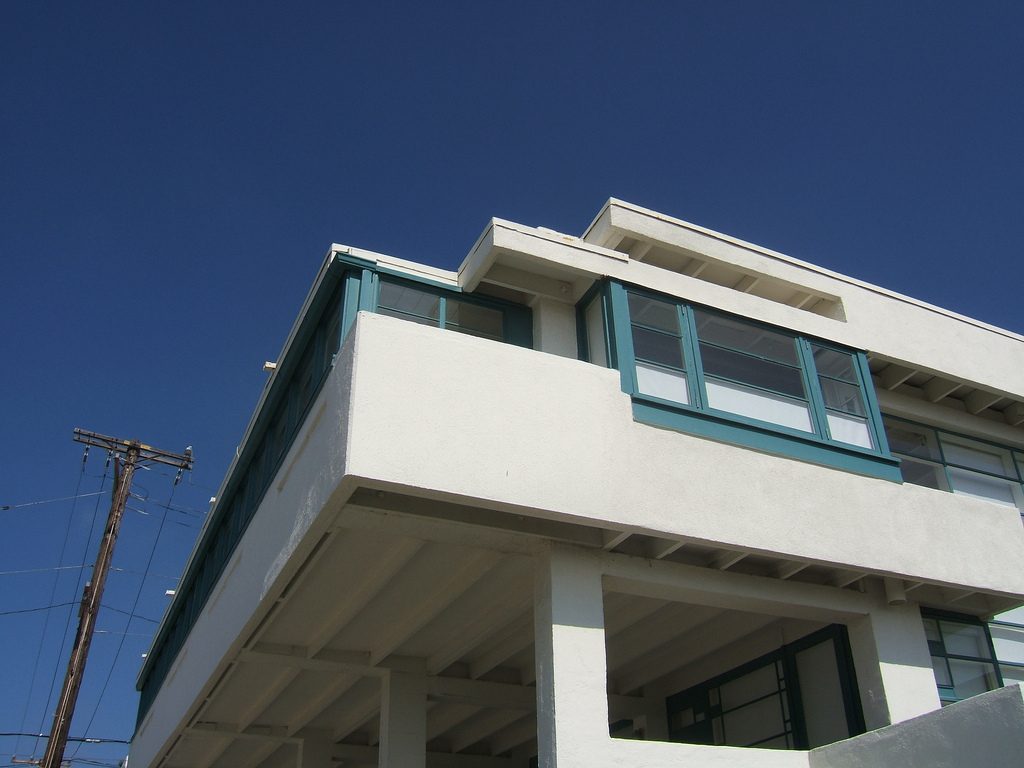 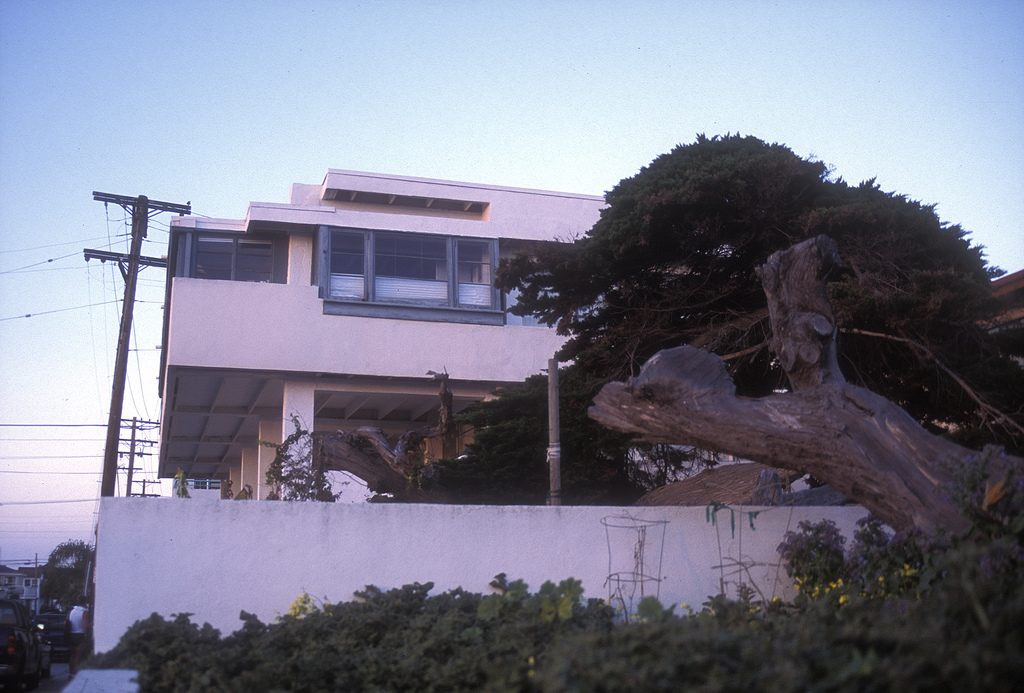 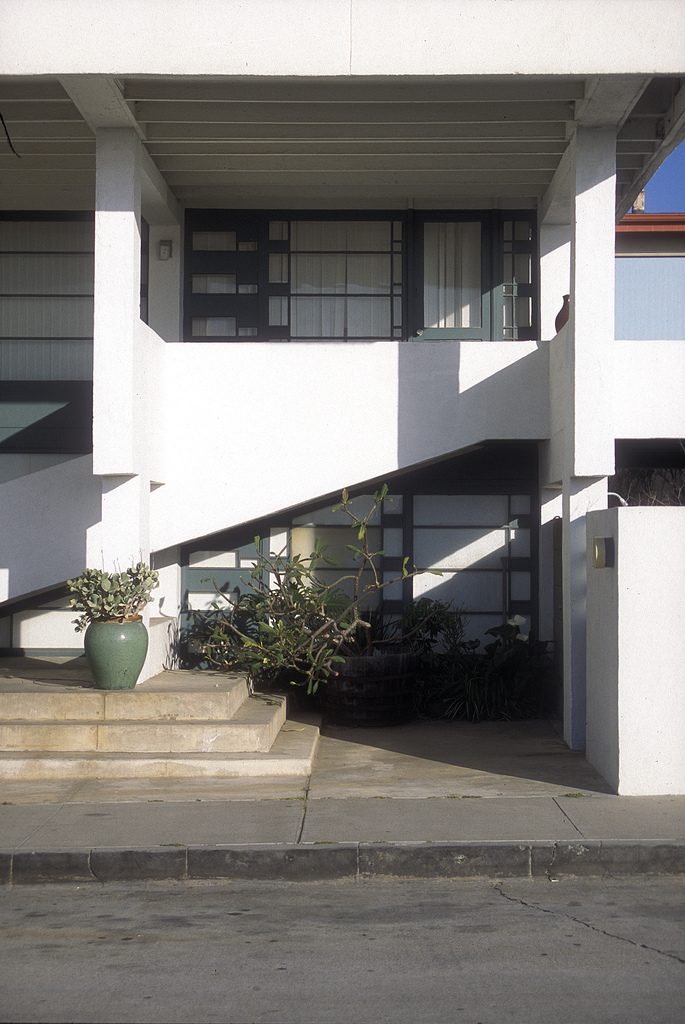 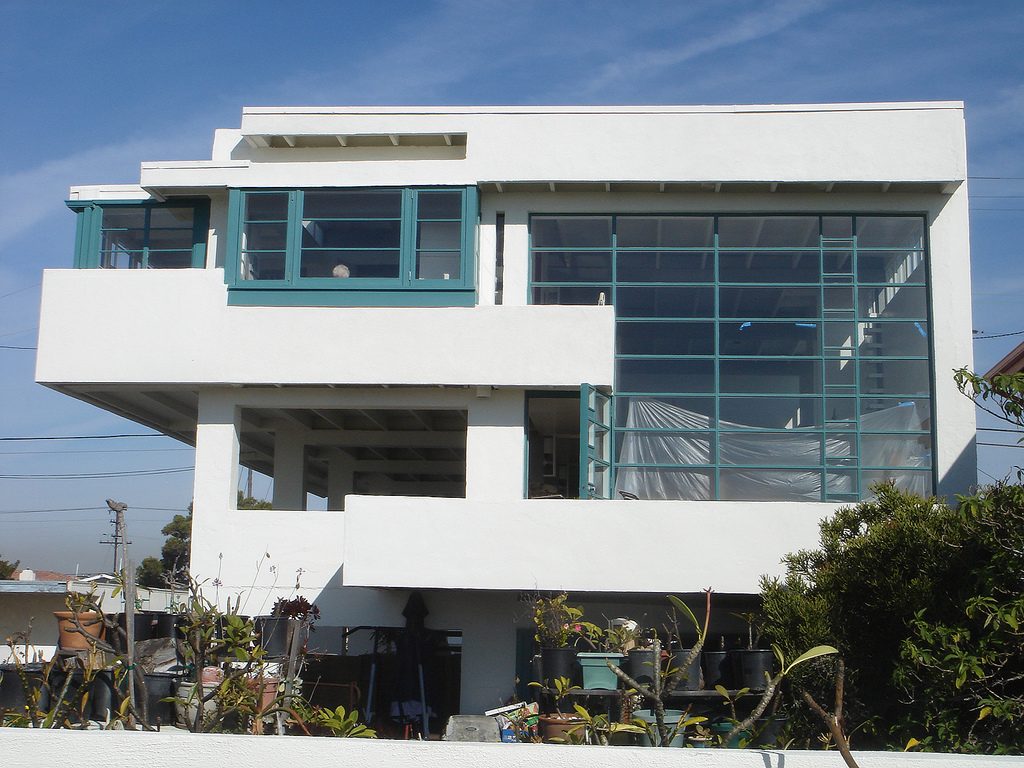 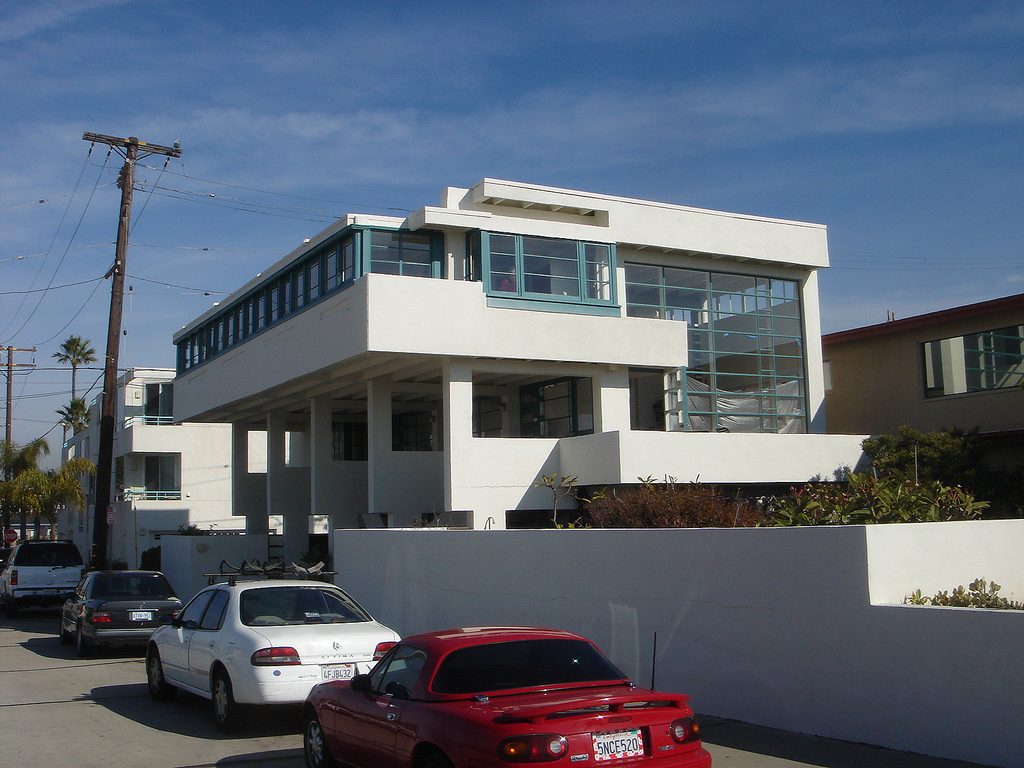 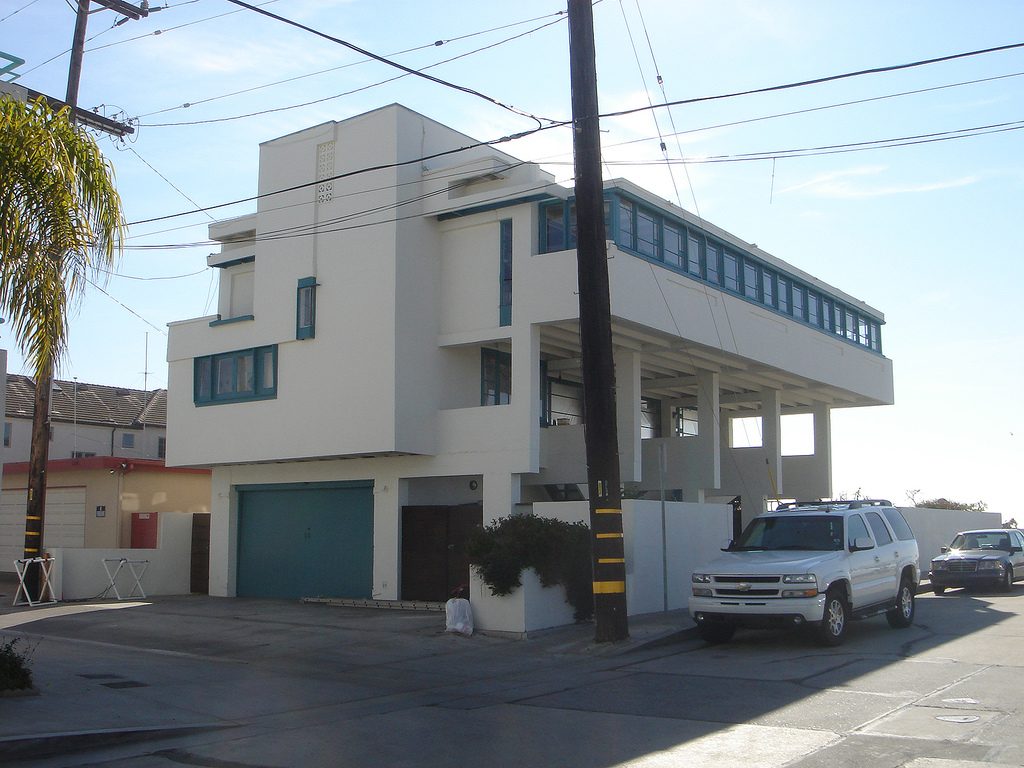 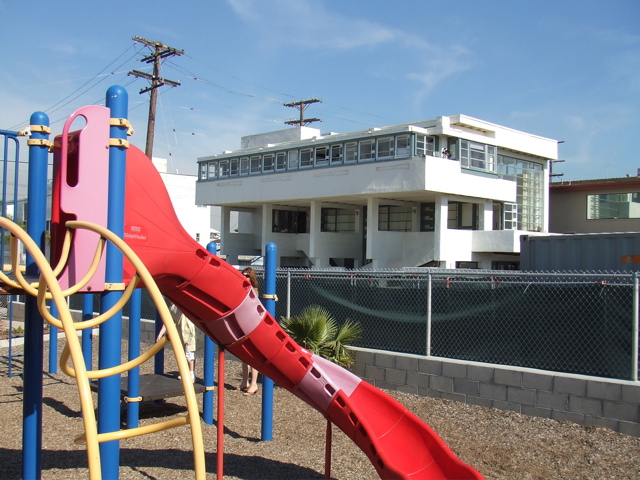 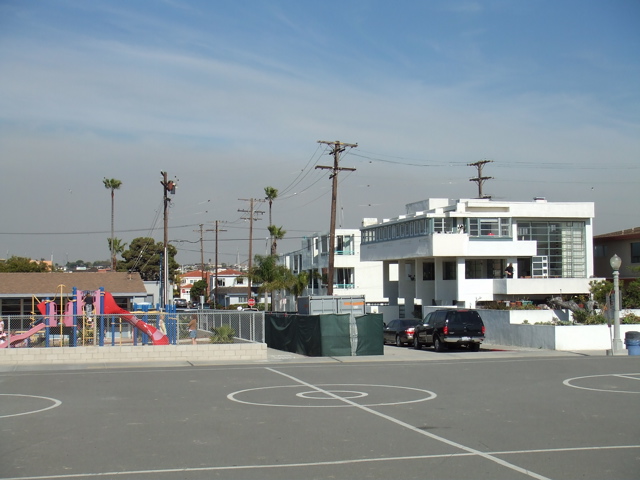