Over 15 million people have traveled in the giant wheel that since February 2000 it became part of the landscape of London, the London Eye.

The attraction, funded by the airline British Airways, began as part of the celebrations of the city for the arrival of the new millennium and its creation was that marriage formed by David Marks and Julia Barfield.

The London Eye tops the list of the ten most popular private monuments in the city. Turn in a course that lasts 30 minutes, with a maximum of 800 passengers and on a clear day can see up to Windsor Castle, 40 miles away. From its booth ensures a panoramic view of 360 º.

With its 135 meters high, holding the classification of the world’s largest Ferris wheel in 2006 until it was opened to the public the Star of Nanchang, which is located in Nanchang, China, reaching 160 meters high.

The London Eye was built in 2000 and funded by British Airways to celebrate the millennium in central London on Jubilee Gardens, South Bank, in the same bank of the Thames. From the other side of the river looks, with some misgivings, is the Big Ben himself. The London Eye is located within walking distance to several subway stations, including the Waterloo and Embankment stations.

For its construction, a floating crane was installed on eight platforms to lift the rim of the giant wheel. Was raised slowly in several stages, is the most heavy lifting so far.

The wheel was built in sections, namely 16, floating in the Thames on barges and assembled lying on pontoons. Was completed when the wheel was lifted with the help of cranes at a speed of 2 degrees per hour to reach 65 º. Was left in this position for a week while engineers prepared the second phase of lifting. The total weight of the steel of the London Eye is 1,700 tonnes.

Was opened by British Prime Minister Tony Blair on December 31, 1999, but was not opened to the public until March 2000 due to technical problems.

Slight 0.26 m / s (about 0.9 km / h), so each loop is about 30 minutes. The wheel does not usually stop for passengers to climb: the speed is slow enough so that they can easily raise and lower the capsules at ground level. However, it stops to enable disabled or elderly passengers time to get on and off safely.

This giant wheel of 135 meters in height has 32 booths representing the glass 32 districts of London and can fit 25 people comfortably sitting in banks.

The London Eye has 32 passenger capsules sealed and air conditioned, 8 meters long and 4 meters in diameter, instead of being hung from the structure as in most of the wheels are subject to the top of the wheel through two rings and have a mechanical stabilization system that keeps the dish level. This system avoids the problem of balancing and allows greater visibility from inside the capsule, since the structure does not hinder vision.

In the central cube in the “heart” of the wheel are mounted two oscillating roller bearings, which weigh tons, and have an internal diameter of 1 meter.

Reinforce the safety of the structure ELGES two large joints, especially execution, with outside diameters of 600 mm and a weight, each of 194 kg. that were essential to move the wheel from its horizontal position, which was mounted to a vertical position alongside the Thames. This process produced surface pressures higher than 450 N/mm2.

The main material is carbon steel.

In the wiring has been used two different kinds of material, wire and cable noria the backstay.

The base is under compression supports, consisting of thousands of tonnes of concrete pillars and many of the same material.

The most important elements of the bucket, steel tube sheet, and the shaft, made from eight small sections, were produced molten steel, through the company Skoda Steel.

The construction of the London Eye has become an example of European cooperation:

The cabins are made of glass, steel and aluminum and its interior is air-conditioned. Were built in France, a specialist in elevators.

The laminated glass panels were cut in Italy and each cabin is protected by three layers of glass and curved laminated optical quality with a minimum of structural elements.

The central pivot of 23mts in length and 335 tons waisted and were manufactured in the Czech Republic and the bearings in Germany.

The legs in the form of A, weighing 310 tons, which support the whole structure and the steel wheel, made in Holland of steel in Britain. 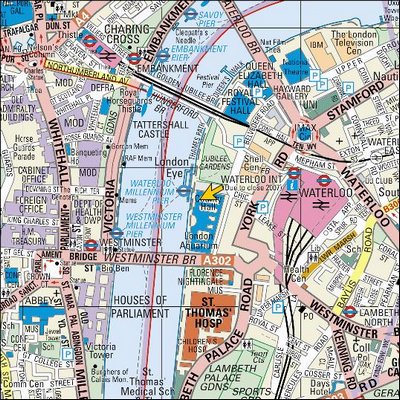 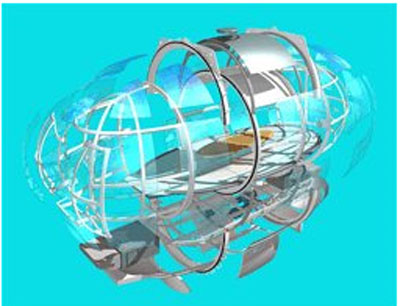 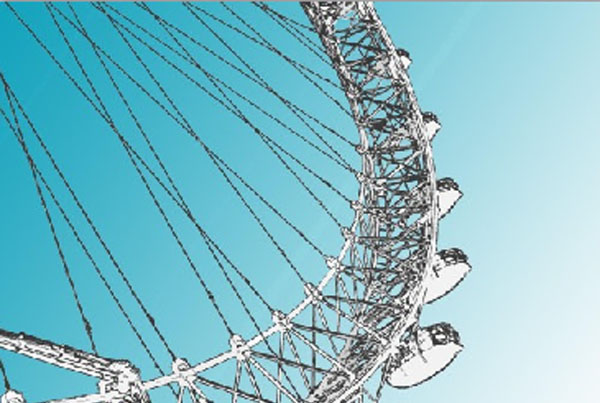 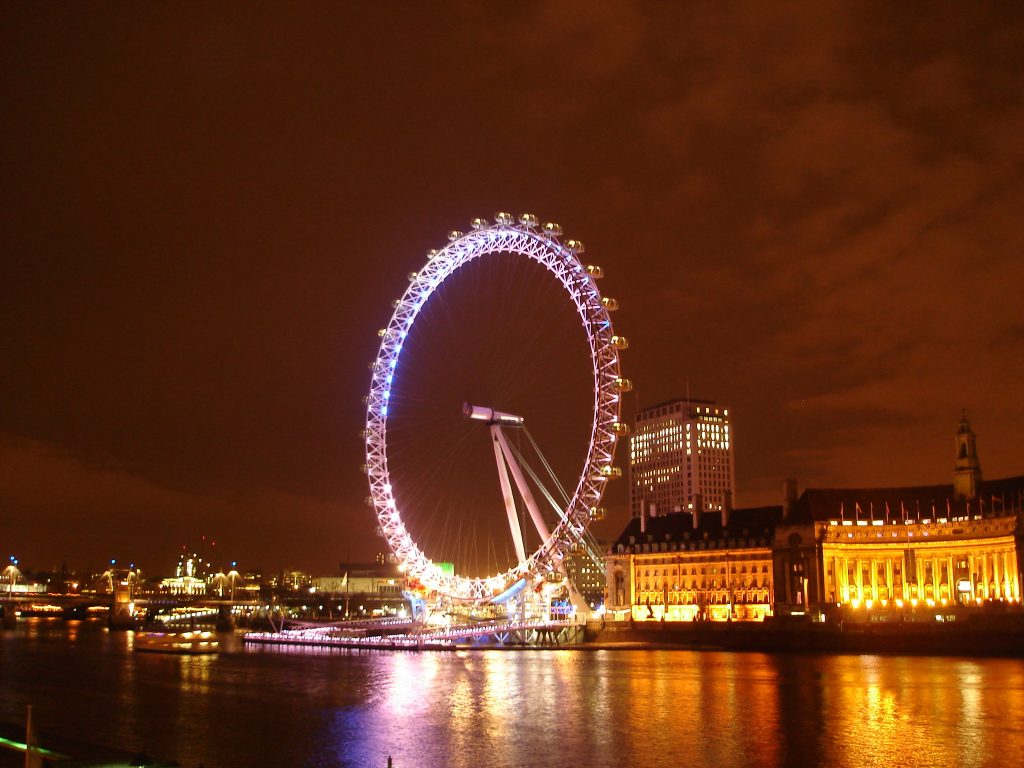 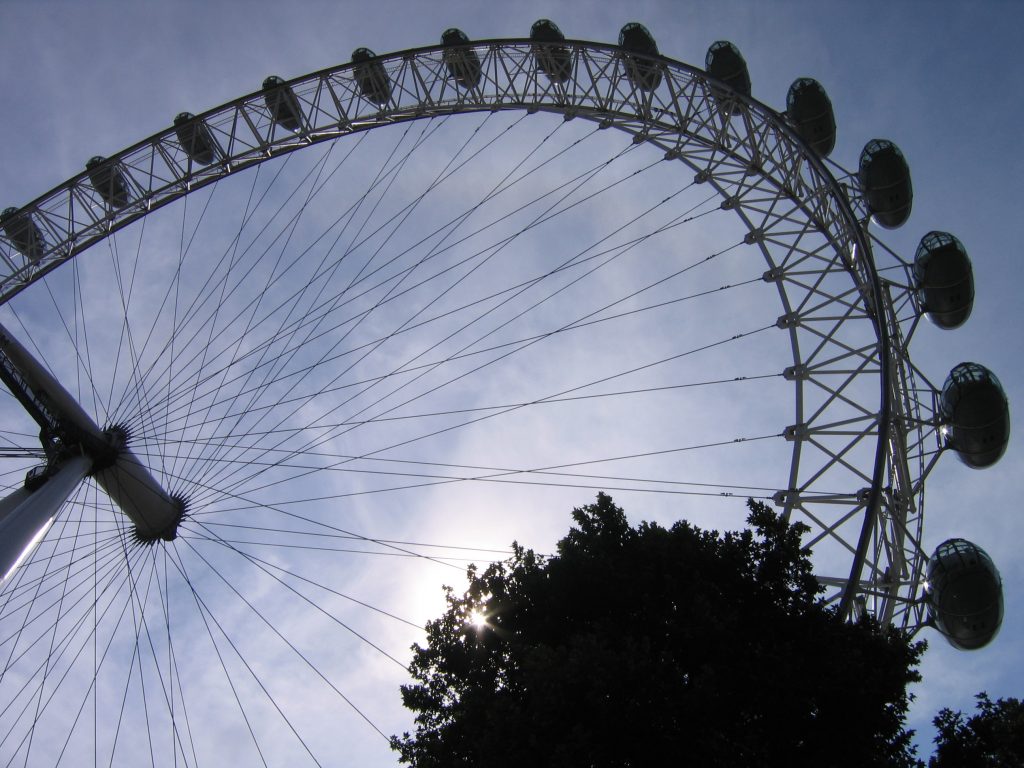 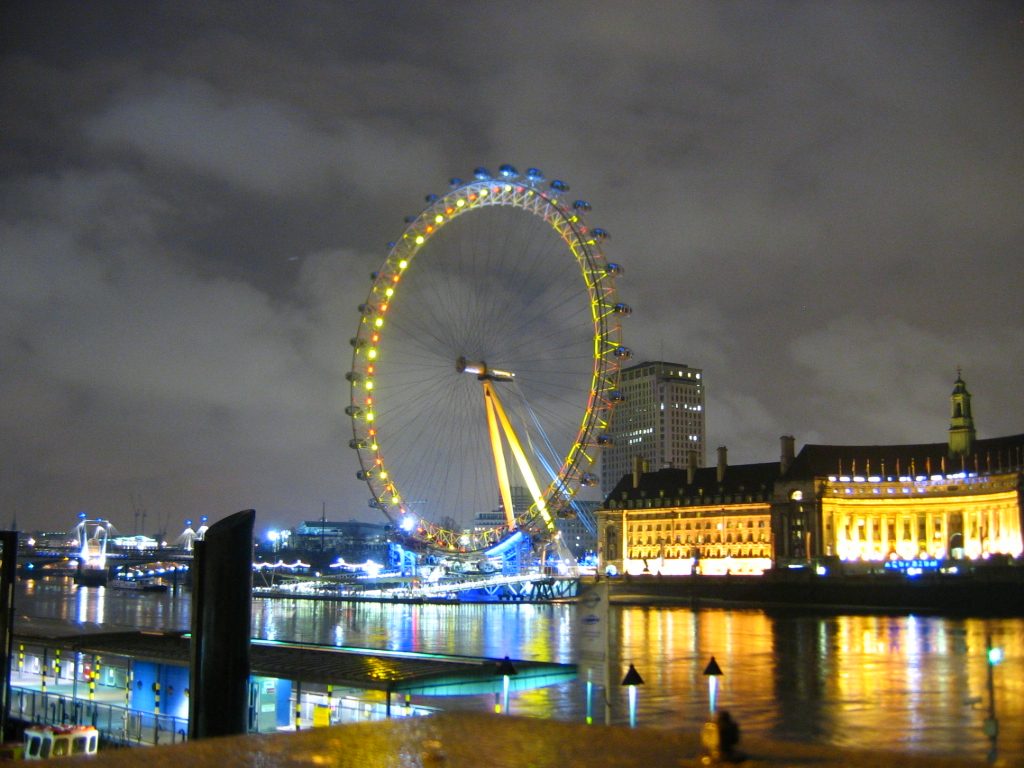 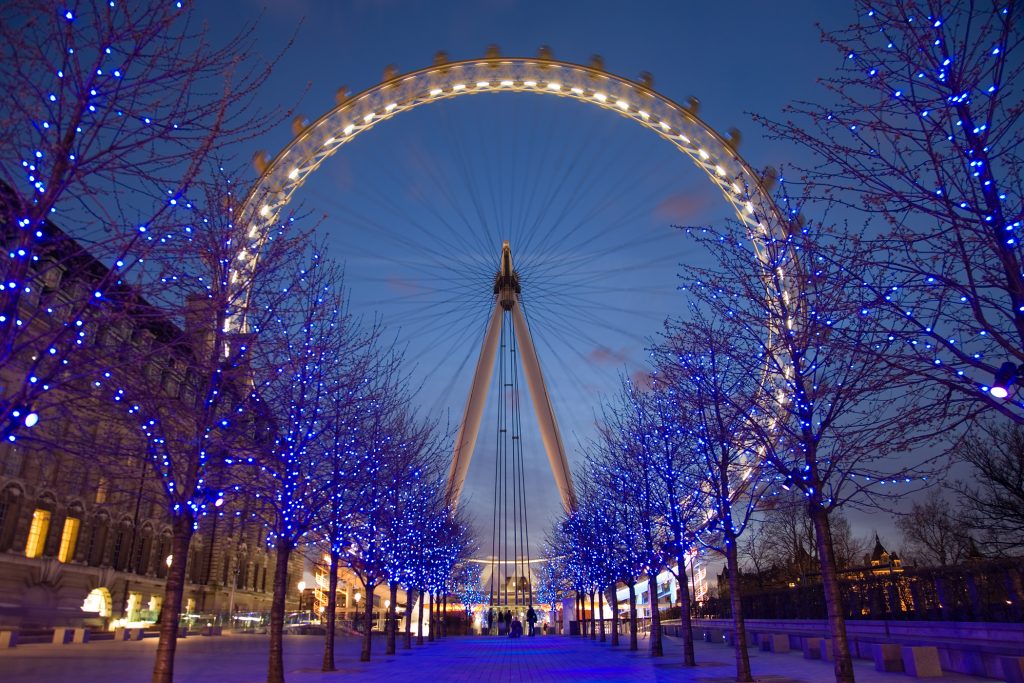 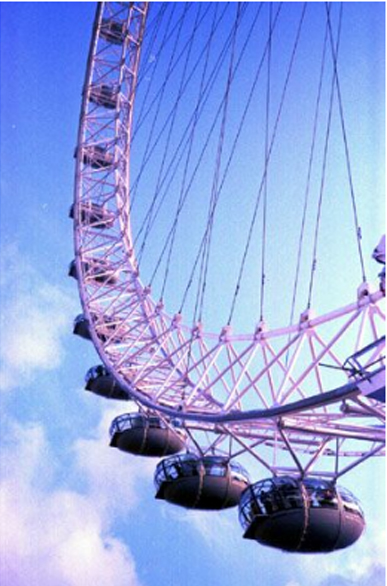 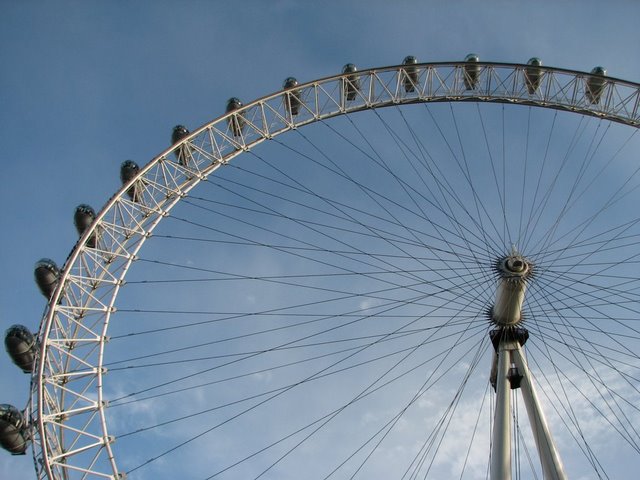 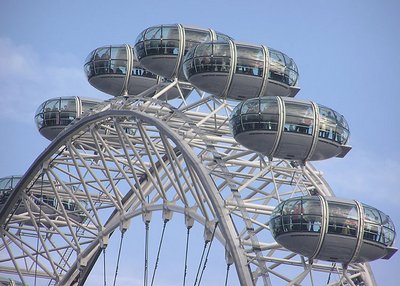 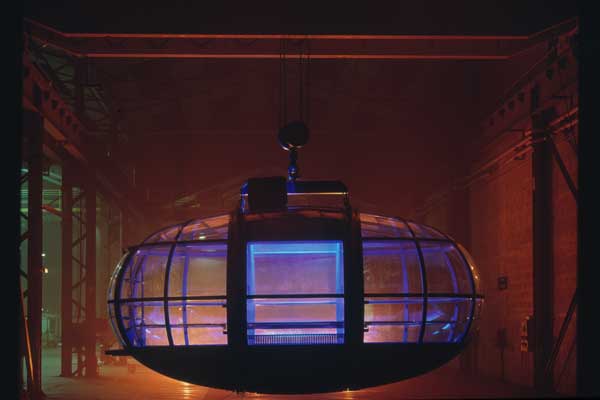 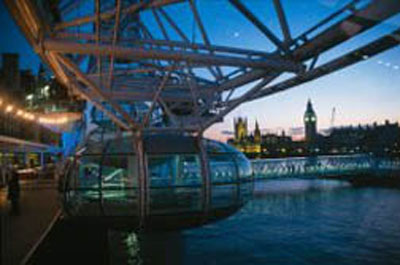 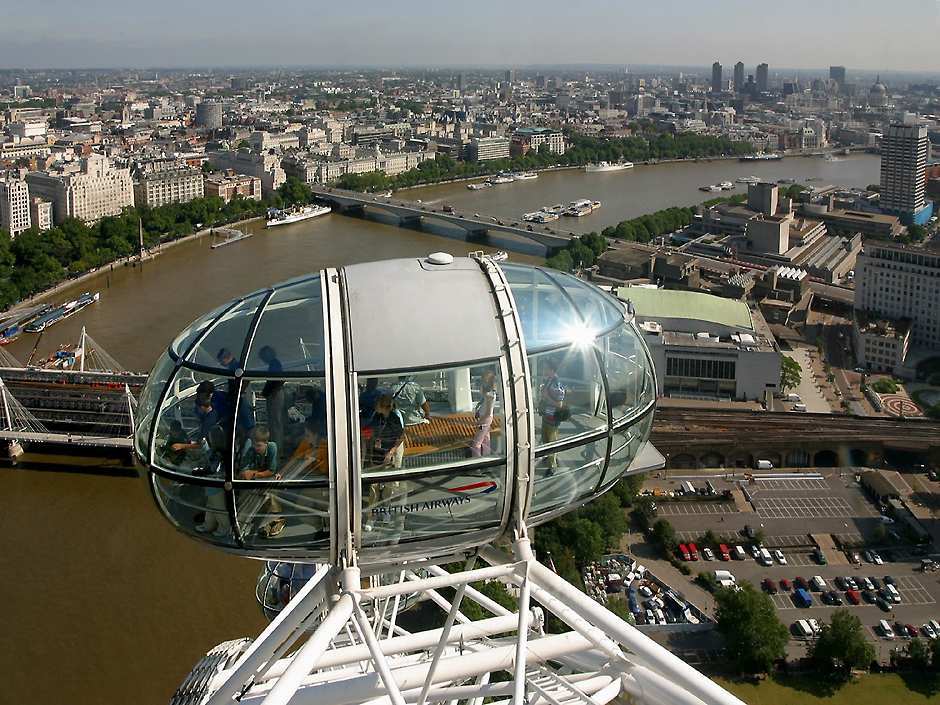 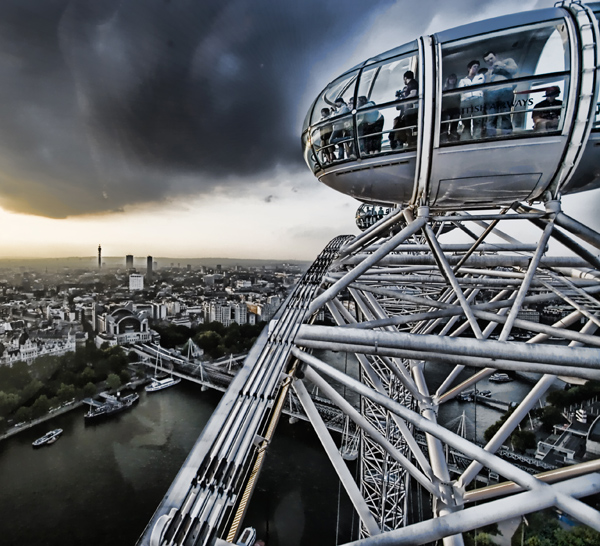 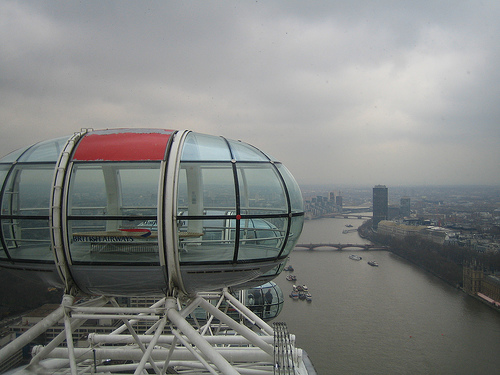 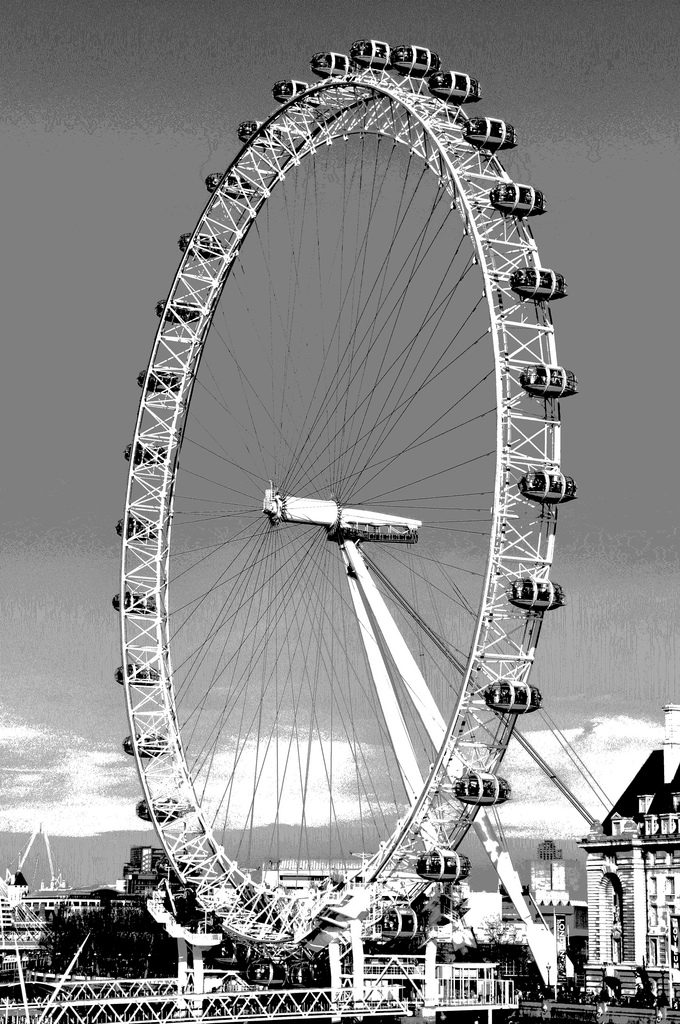 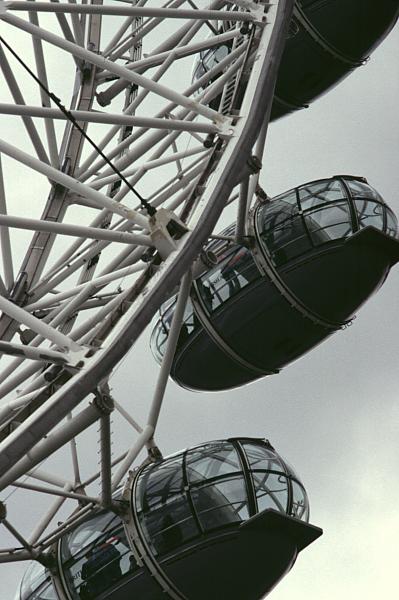 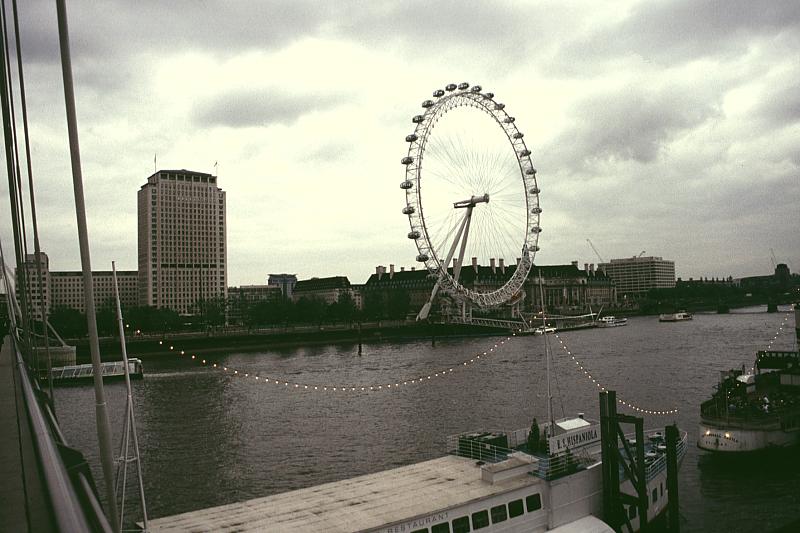 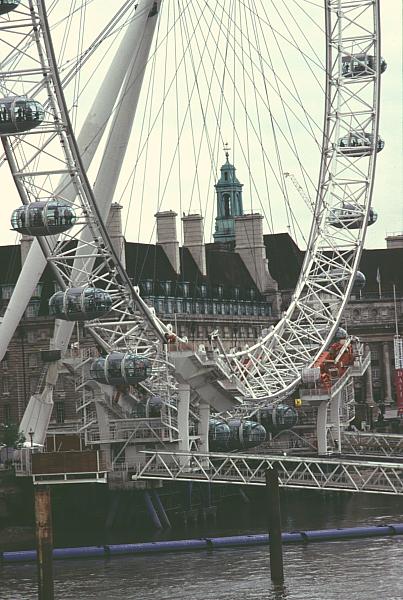 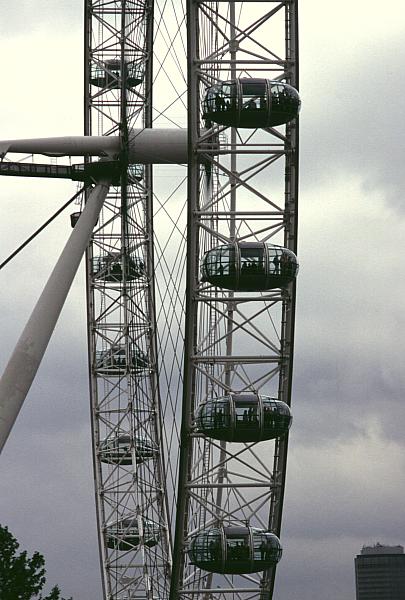 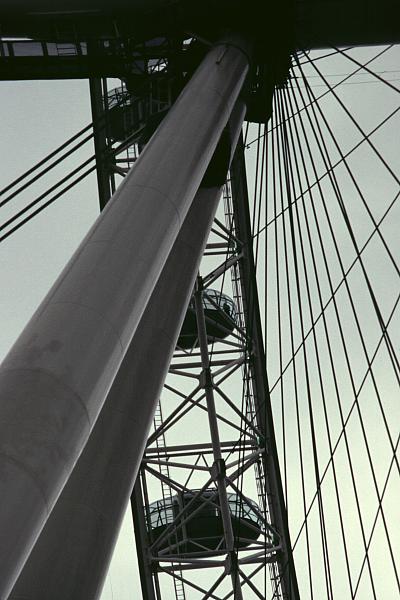 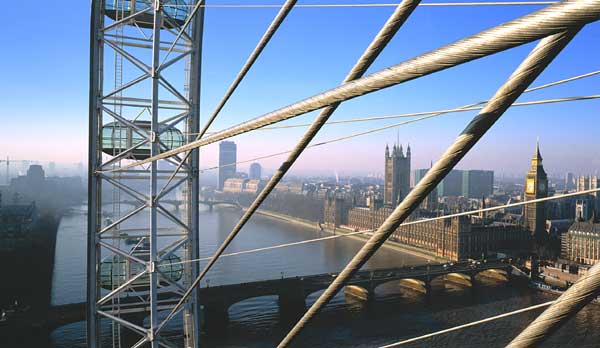 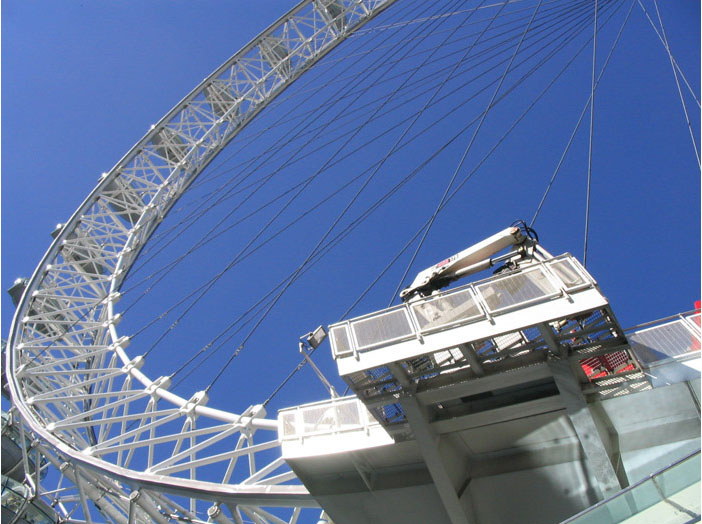 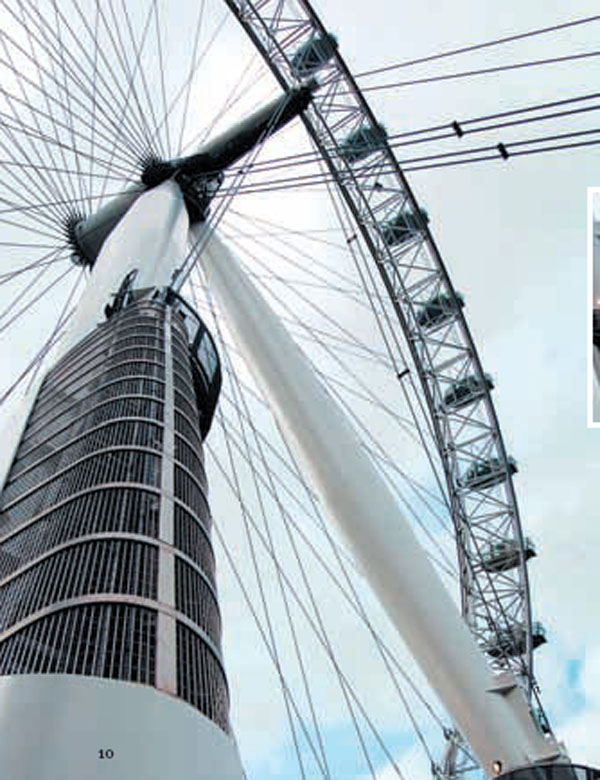 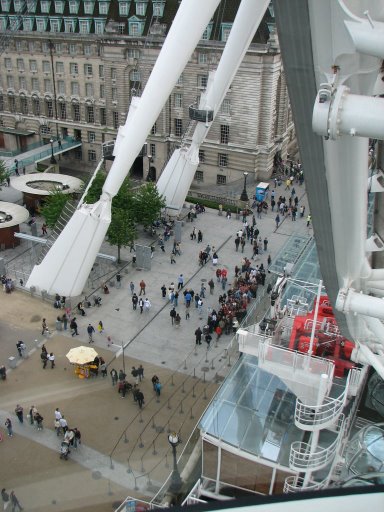 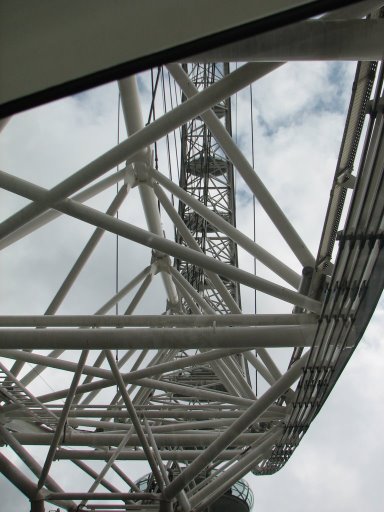 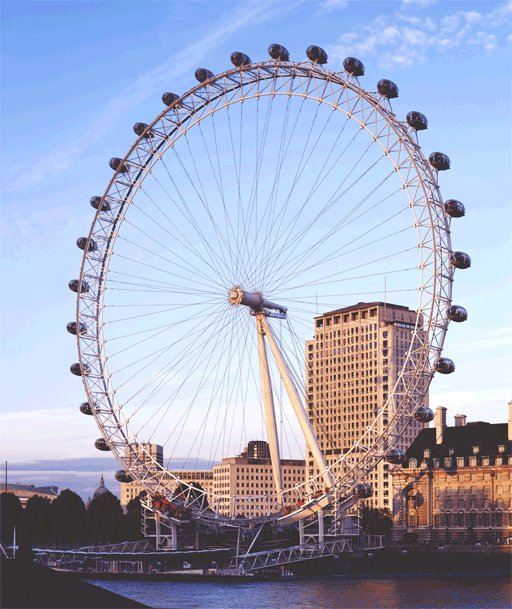