The first consideration when addressing the issue of how to express a small airport in the scale of the landscape of the highlands of Lleida was to find a balance between trying to avoid a strange artifact landed and not to lose the character of landmark reference recognizable in the distance.

The translation, scaling and regularized, the colors of the plots Alguaire culture, and by extension of Lleida, the front cover and is not intended to mimicry camouflage, but a direct allusion to the character of the land, to their identity.

The airport is set in a land area of 367 hectares, on which lifted the Terminal Building and Control Tower with all the necessary dependencies to offer the user a quick and pleasant. In total floor area is about 5000 square meters: 1412 m2 correspond to the Passenger Terminal, 2890 m2 to the control tower and 640 m2 of the workshops.

Airport Lleida (Lleida) was heaving in the highlands of Alguaire municipality belonging to the region of Segrià. At a distance of 15 kilometers from capital Lleida, Catalunya, Spain.

At the time of its opening to the airport is via the road N-240 and provides for the implementation of new approaches from the future Highway A-14 and A-22 as well as rail access.

The colors used in linking the building with the landscape

On the clean surface and widespread farmland, fragmented only in its own plane by the textures of different colors, is not looking for a reference to the usual formal metaphors referring to the wings, the birds or the world of aerodynamics and technology. The agricultural patchwork refers to the specific location and links the airport to the territory in which it is inserted.

The program requirements included a terminal building, control tower and two spaces for workshops. None of them due to their small size, gathered enough features to represent the new airport, so the search strategy followed the union of the three programs through a single visual gesture: a large green blanket, floating on the ground and with ability to fold smoothly and tailored to the functions of front cover and at the same time.

This robe allows that future agricultural expansion are collected by the same gesture, so that the airport is not isolated scattering numerous buildings and free from unrelated, usually characterized as such large equipment.

Terminal Building, which filters the user of the land side to air side and vice versa, is framed in a rectangle of about 64x22m on one floor, so that loading and arrivals run on the same level.

The main hall, which leverages more headroom created by the undulation of the roof, connects the two spaces and seeks to maximize visual transparency with the outside world, helping passengers feel at all times perfectly located.

Two opaque technical blocks, defined as compact volumes covered by the higher order of the deck, housing the offices that must necessarily be separated from the open spaces, such as services, baggage, offices, staff rooms and facilities.

The tower, 42 meters high, is divided into nine ground floor and stage, welcoming the specific functions of aircraft control.

Programmatically, ground floor access is available, technical support and services of the control tower, the third to the fifth floor spaces for principals, while the sixth to the ninth stays are located rest of drivers, and administrative facilities. The technical plant, the first level, uses the space between the ground floor and other floors, naturally ventilated through perforated facade.

The facade of the tower is formed by the vertical mantle below the deck of the terminal, creating a double skin translucent wood, sheet metal microperforated and lacquered in different colors, which homogenizes the hollow interior of each room, acting on its time as an effective sunscreen.

Finally, the beacon, part geometry and material strictly unchanged in a control tower, allows the correct visualization of the headwaters of track and platform, meaning a more technical piece, a dish most of which necessarily must be placed on the roof of the tower.

The building’s visual unity is achieved by covering the entire facade with a micro-perforated metal sheet, painted in shades of green, yellow ocher and contribute to their integration with the surrounding landscape. On the facade of the Tower this plate is combined with treated pine.

On deck, combined with layered veneer plant acting as a thermal barrier while the side of the mantle are lined with rusted steel surface which shows the passenger shed the name of the airport.

Inside, hiding in ventilation systems, lighting and other services have been used oak wood slats.

Windows that go from floor to ceiling form the outer walls of the main lobby of the Terminal, allowing those who are inside look at the environment, either the landscape or to the track. 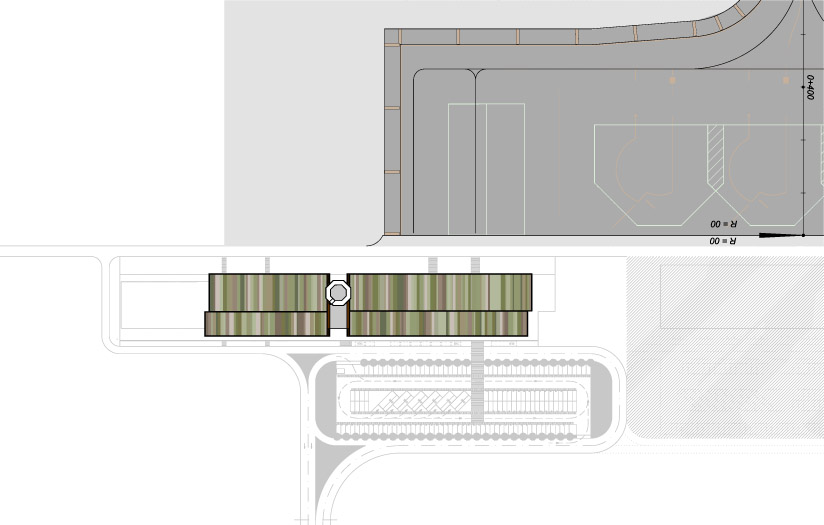 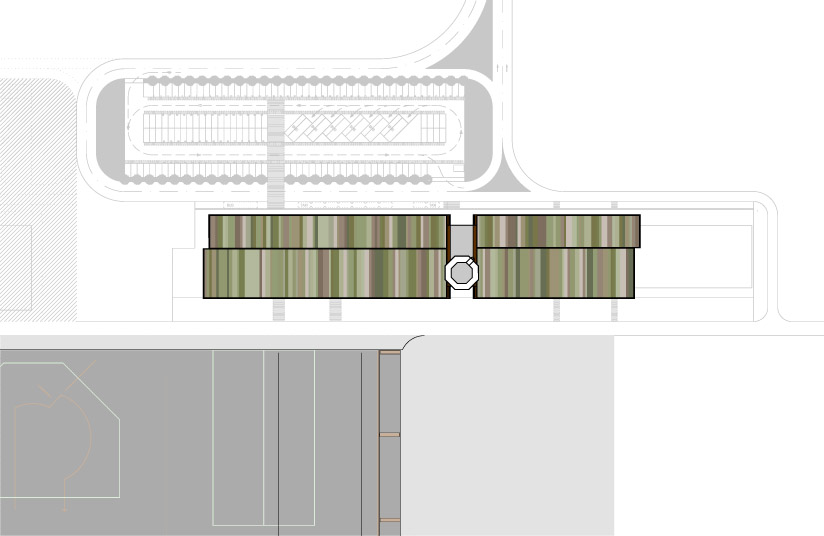 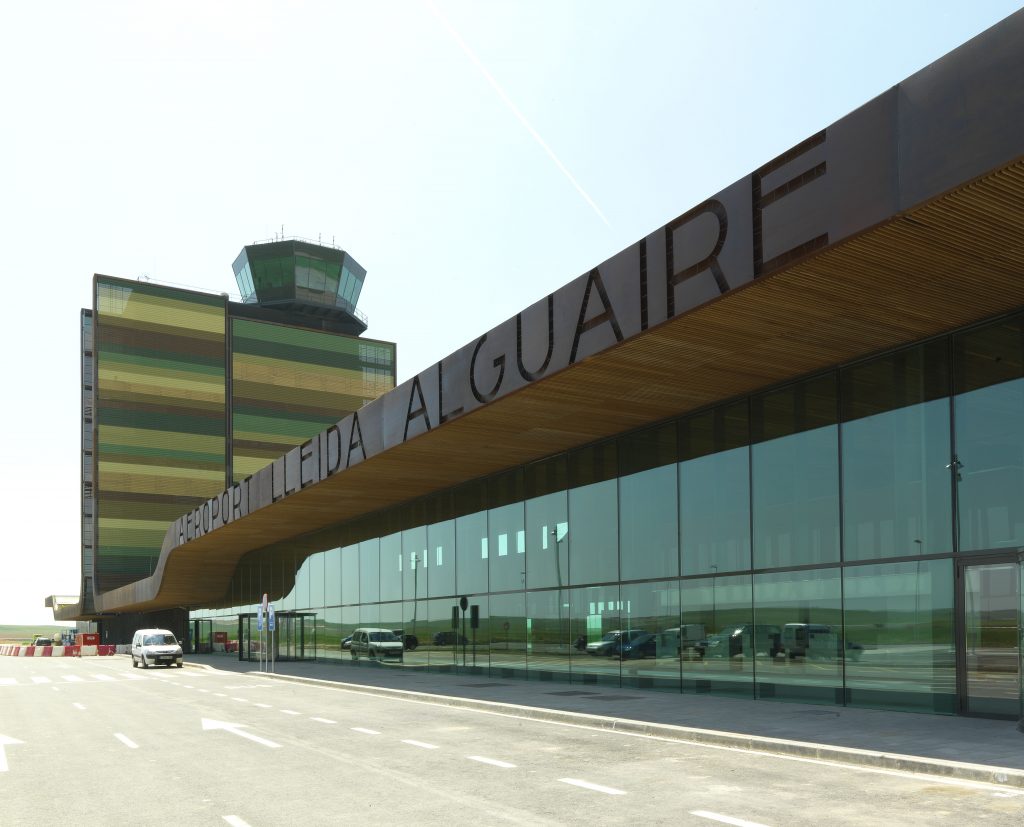 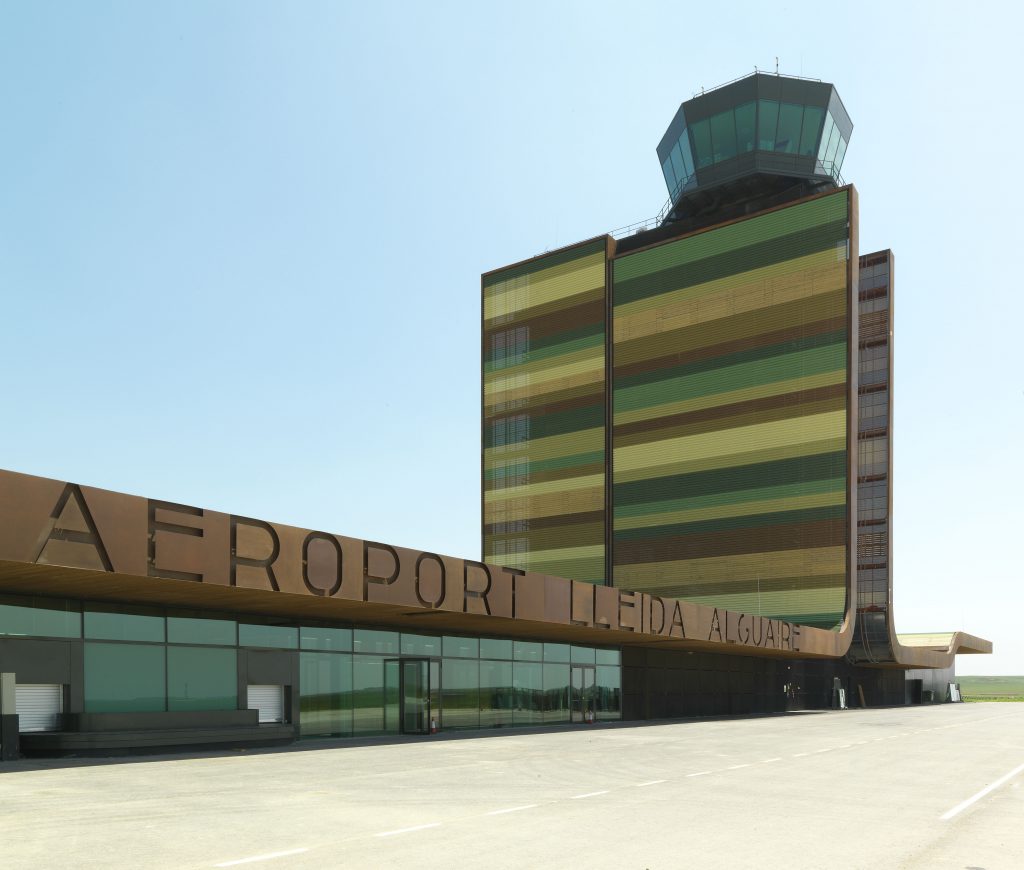 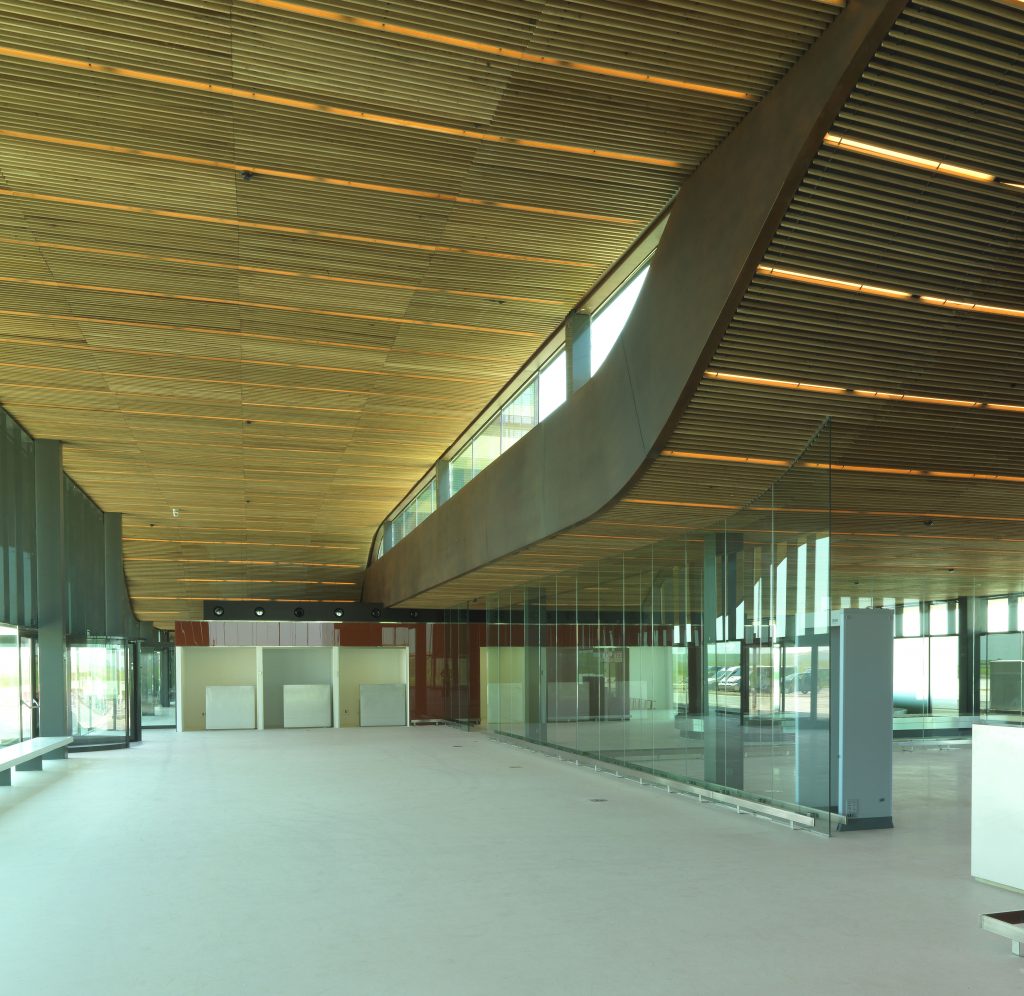 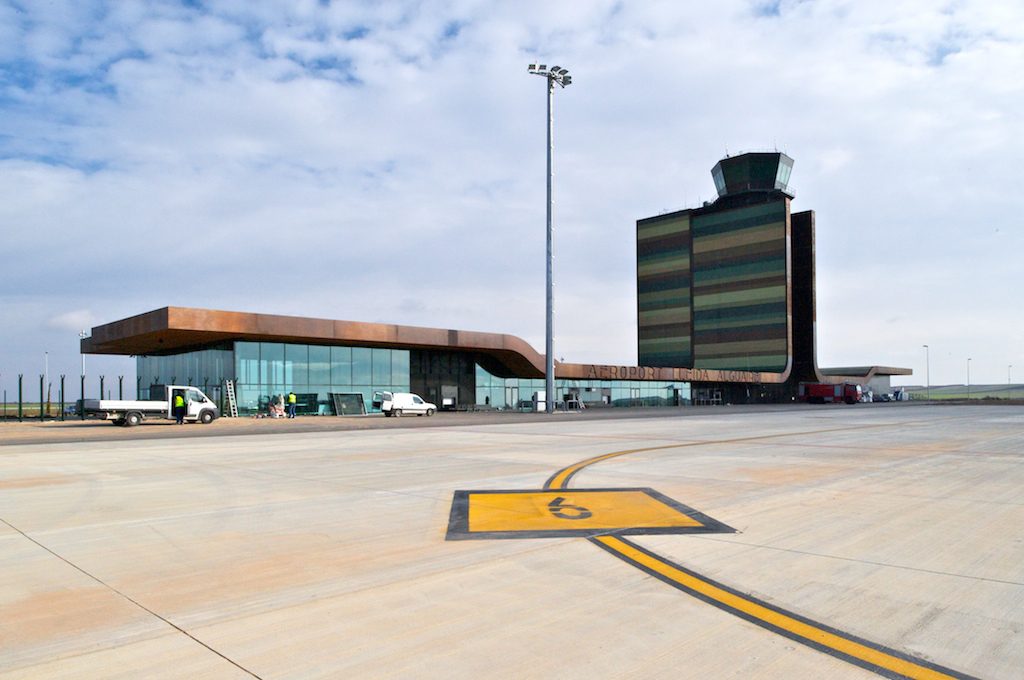