Library of the Faculty of Humanities and Social Sciences in Zagreb

Library of the Faculty of Humanities and Social Sciences in Zagreb moved into a new building opened in March 2009, years after the actual project was entirely defined. First sketches were made in 1994, even though the need for the new building was articulated almost immediately after the completion of the new Faculty building in 1961. The Faculty of Humanities and Social Sciences is the oldest and largest Croatian research and higher education institution in humanities and social sciences, as well as a significant cultural institution with a great impact on Croatian culture and society. It is part of the University of Zagreb, the oldest university in Croatia and one of the oldest universities in Europe. The history of the University of Zagreb begins in 1669 with the recognition of university status and privileges to the Jesuit Academy. Since 1692 Philosophical study in Zagreb started with its formal and legal activities as Neoacademia Zagrebiensis, a public institution of higher education.

The new building contains a number of smaller libraries that used to be located in the Faculty’s departments. The small and irregular trapeze-shaped plot of land next to the Faculty building needed to house 24 libraries, whose combined collection is the second largest in Croatia in terms of the number of volumes (up to 750.000). The Library is the basic unit of the faculty library system, functionally interconnecting different areas, fields and branches of humanities and social sciences of the Faculty.

The plot is exceptionally small and determined by its immediate surroundings, which have already been built upon. This opens the issue of filling out the open space in the complex next to University Lane, where the relationship between the buildings and greenery elements mainly reflects modernistic ideals. The library forms the background of University Lane, in Zagreb, Croatia.

The high diagonally-cut building rises over the low elongated buildings of the Faculty, and in a sense supplements the already existing verticals in the closer environment. The visual appearance of the project is aligned with the requirements for light, space and view.

The oblique form stemmed from the analysis of the plot and the future, rather large volume in relation to the nearby architecture. Long northern upwardly inclined façade captures the desirable northern light and views of the city, leaning away from the existing building, while short and downwardly inclined southern façade avoids insulation.

The visual and urban logic of the building flows into its organizational aspects, marked by a gradual transition from the basement with storages for books and insulated glass boxes for individual work along the narrow atrium, through the multi-story reading room to the public open terrace on the roof.

The priority of simplicity, recognisability and legibility of the basic idea marked the entire elaboration and realization of the project.

The library does not have its own public entrance from the outside, but is accessible through the glazed area between the Faculty and the administration wing from the main building’s entrance hall. The distance from the existing building of the Faculty of Humanities and Social Sciences is only 6 metres at the ground level and 14 metres at the top floor. The small distance is resolved in the narrow atrium by help of the slanting building volume. The slope arose out of the need to allow as much high-quality light from the north into the library’s interior as well as out of the need to respect the existing Faculty building. It is repeated on the southern façade of the building as a passive sun protection solution with south-facing angle of 12 degrees.

The content of the Library is distributed across 8 floors, one of which is subterranean.

The total gross area of the Library with the installation floor accounts for 8,800 m2. The users’ premises are organised as reading rooms with open access to sources on six floors of the building. The reading rooms seat 700 people and provide power and network connections respectively and 130 seats with computers.

The cramped nature of the plot where the building is located caused various types of content to interweave and supplement each other (working places for students and staff, glass boxes for individual work, multimedia halls and electronic classrooms with the most modern A/V technology, specially protected spaces with rare library materials, etc.), and they were compressed and enjoy minimal intercommunication.

The slanted glazing over the reading room’s three floors is the consequence of the prism-shaped building. Combined with the galleries on the floors, it creates a stimulating workspace that blends with the external space between the library and the Faculty. The layout of the work desks along the perimeter on all floors uses the advantage of the building’s small footprint.

The entire library system is highly technically advanced and equipped with models for supply, cataloguing, public borrowing and statistics. One of the main advantages of the library is the 3M RFID system of electronic chips, which enables self-check, allowing users to borrow books by themselves.

The metal grid on the façade, intended for sun protection at the same time frame the views, in a way establishing distance between the external and internal space that enables sufficient work concentration.  The transparency of the glass slabs and the netlike sunscreen as a formative element of the outer surface suggest the openness of the building in accordance with the recognisability of the Faculty of Humanities and Social Sciences, a bearer of the open and creative spirit of the university tradition of Zagreb, Croatia and Europe.

All reinforced concrete columns are left visible accenting the texture and colour of concrete. Concrete columns in the building’s interior have been coated with colourless wax.

The library has a reinforced concrete frame combined with a steel structure in the northern glazed part. For southern slope of the load-bearing structure with a south-facing angle of 12 degrees, it was necessary to construct a 7-story supplementary scaffold. 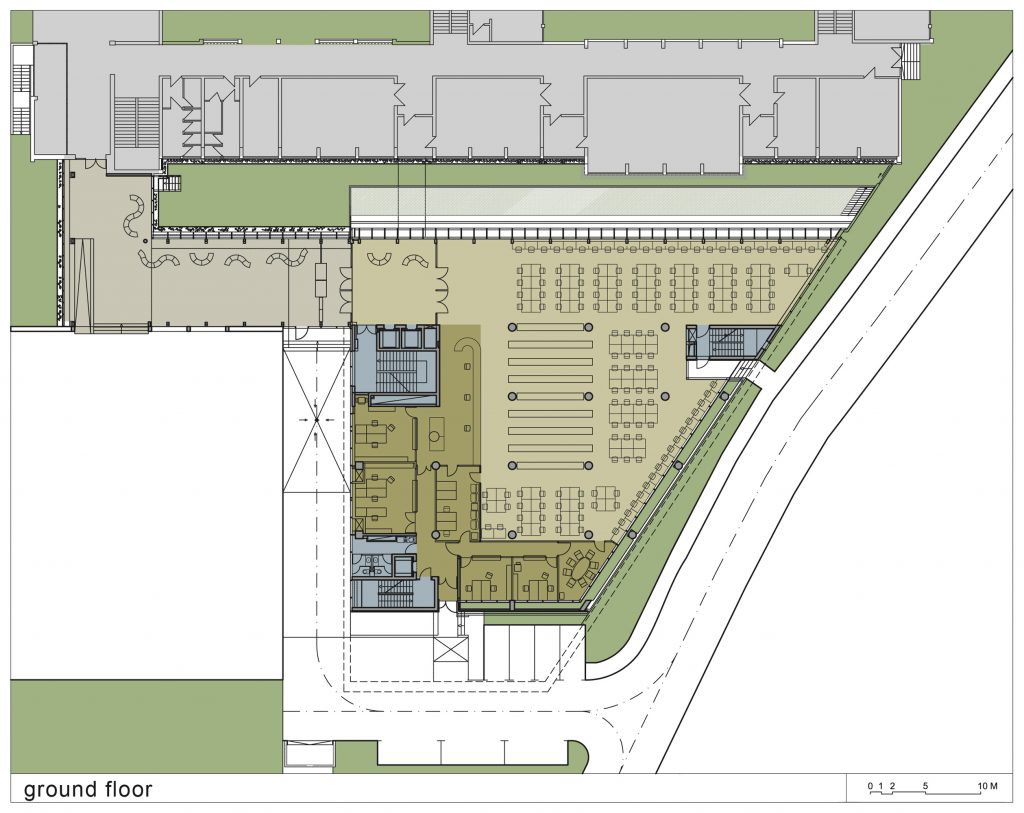 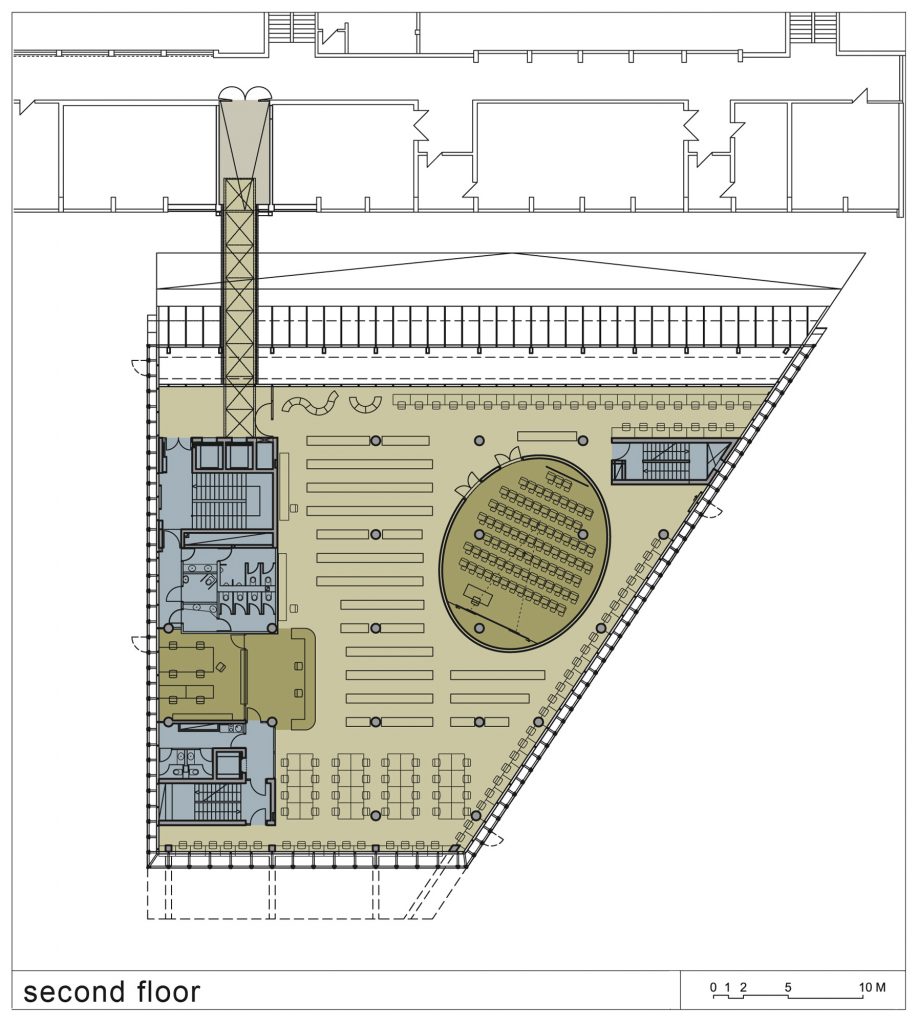 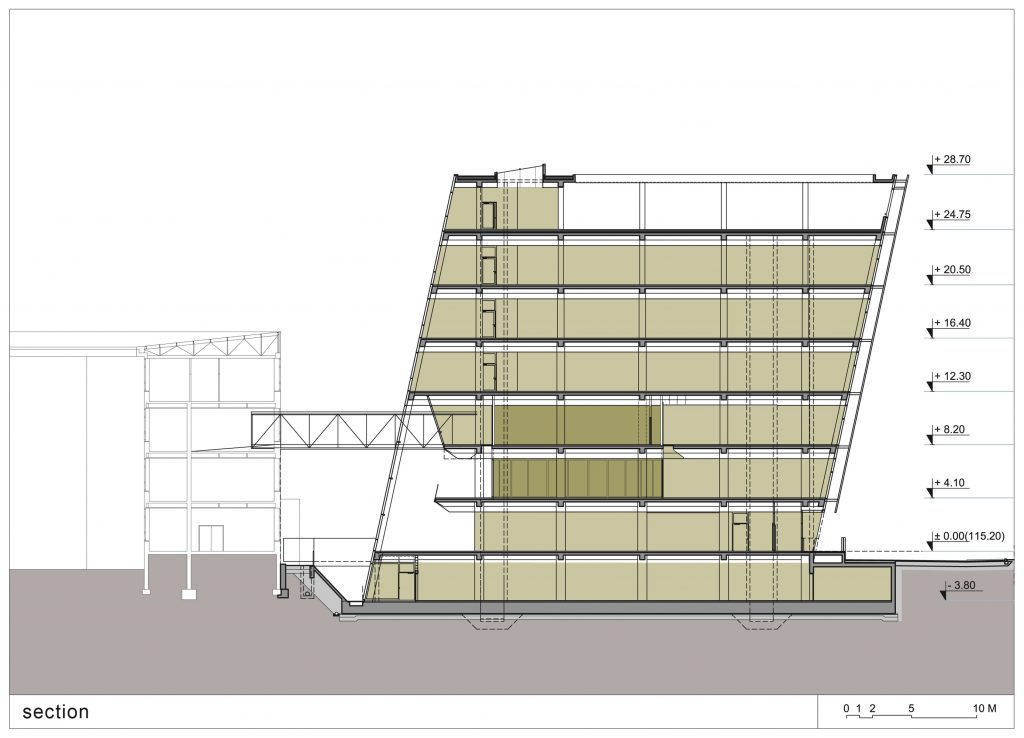 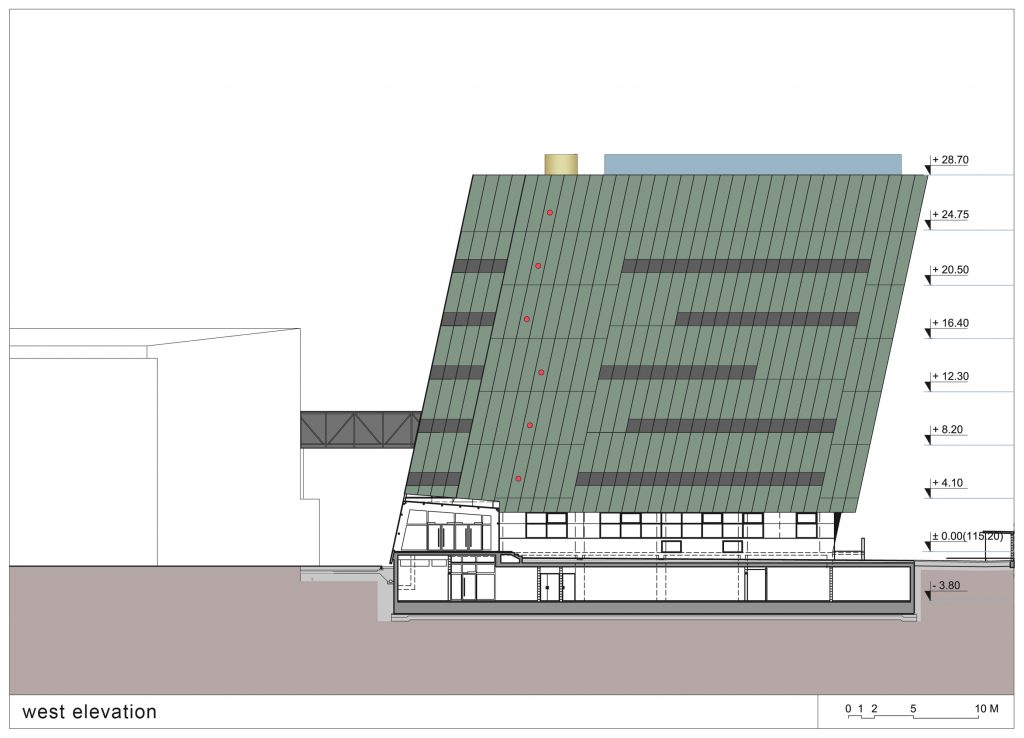 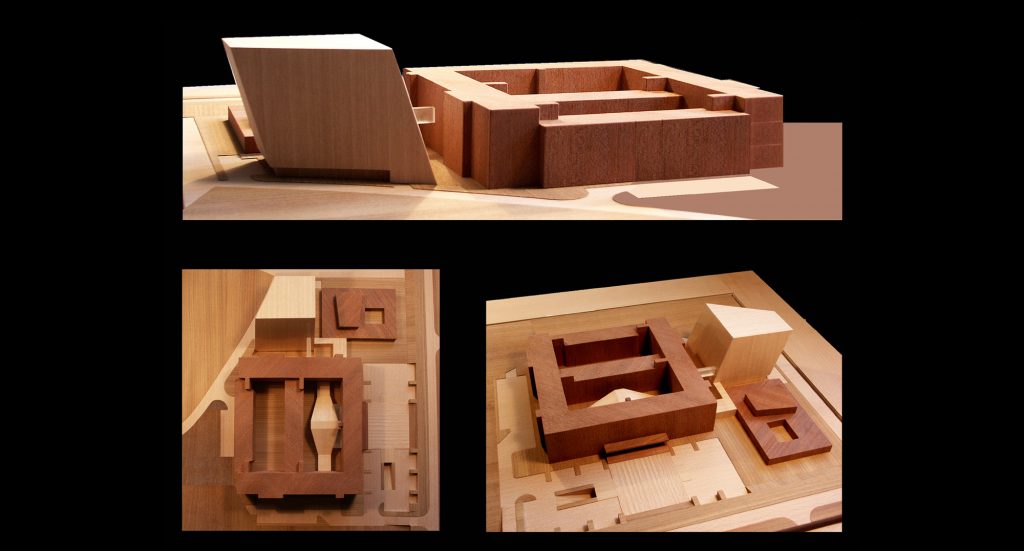 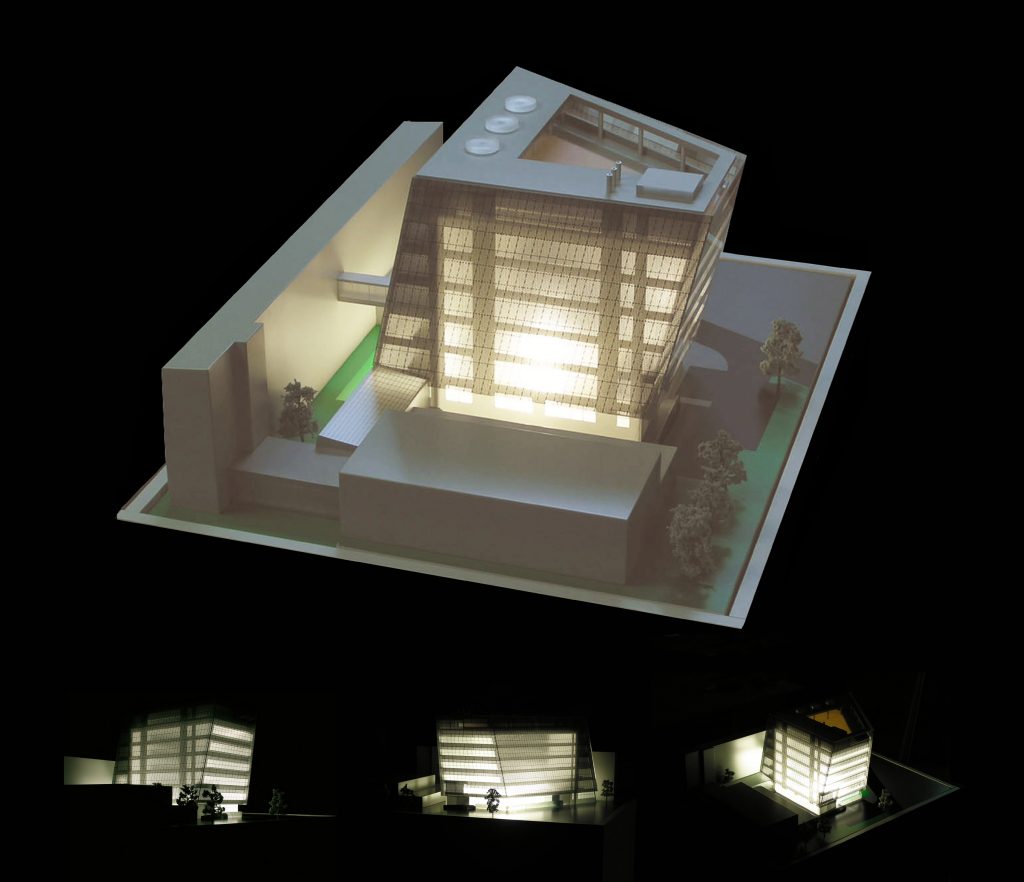 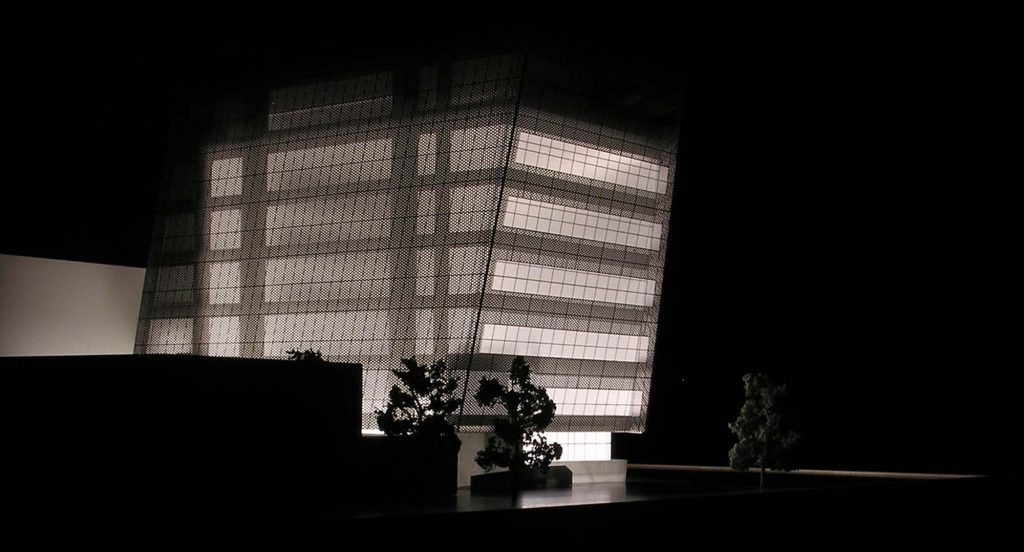 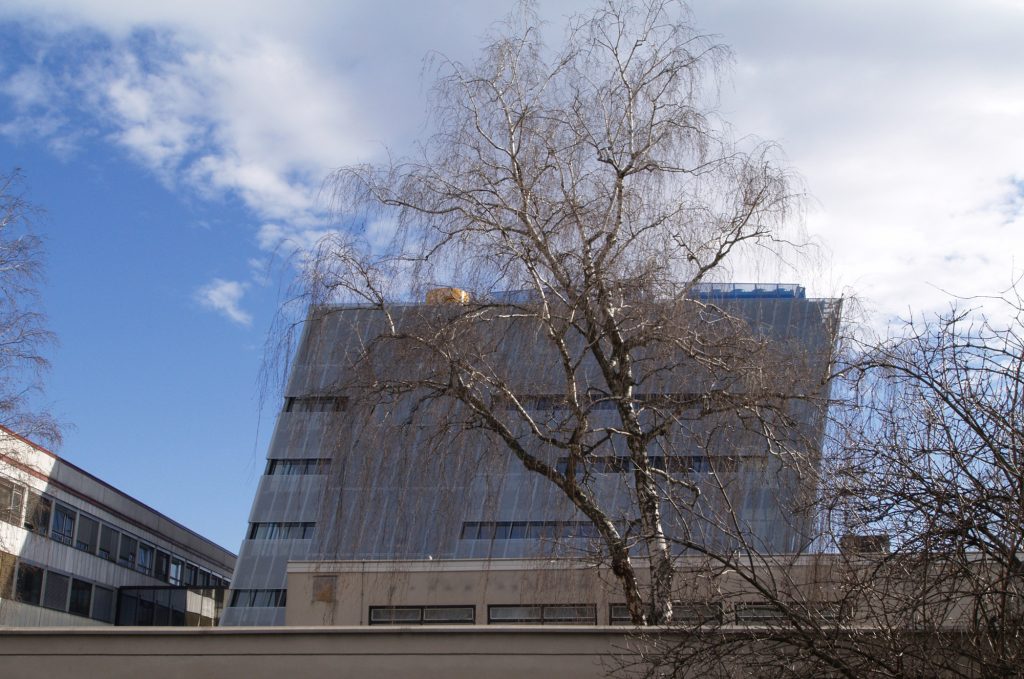 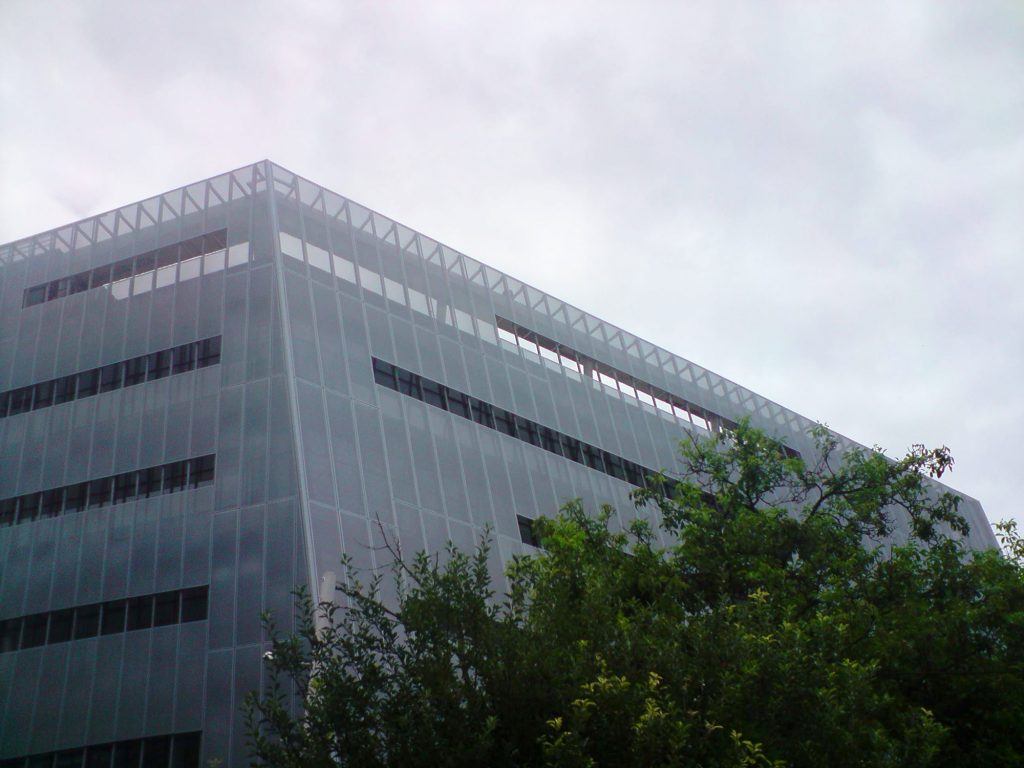 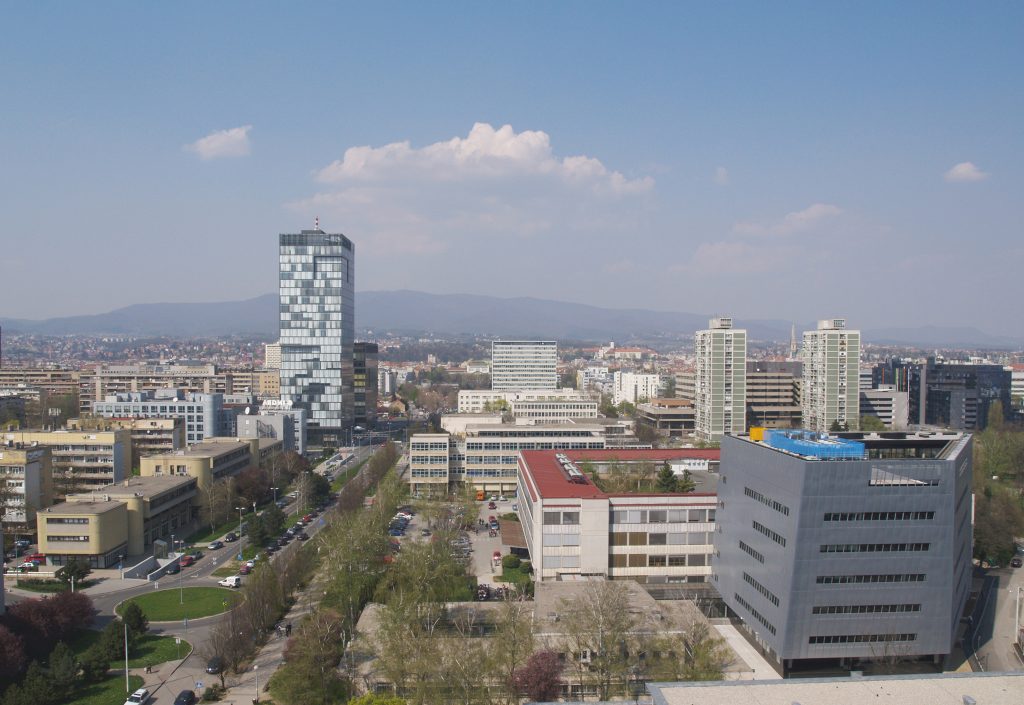 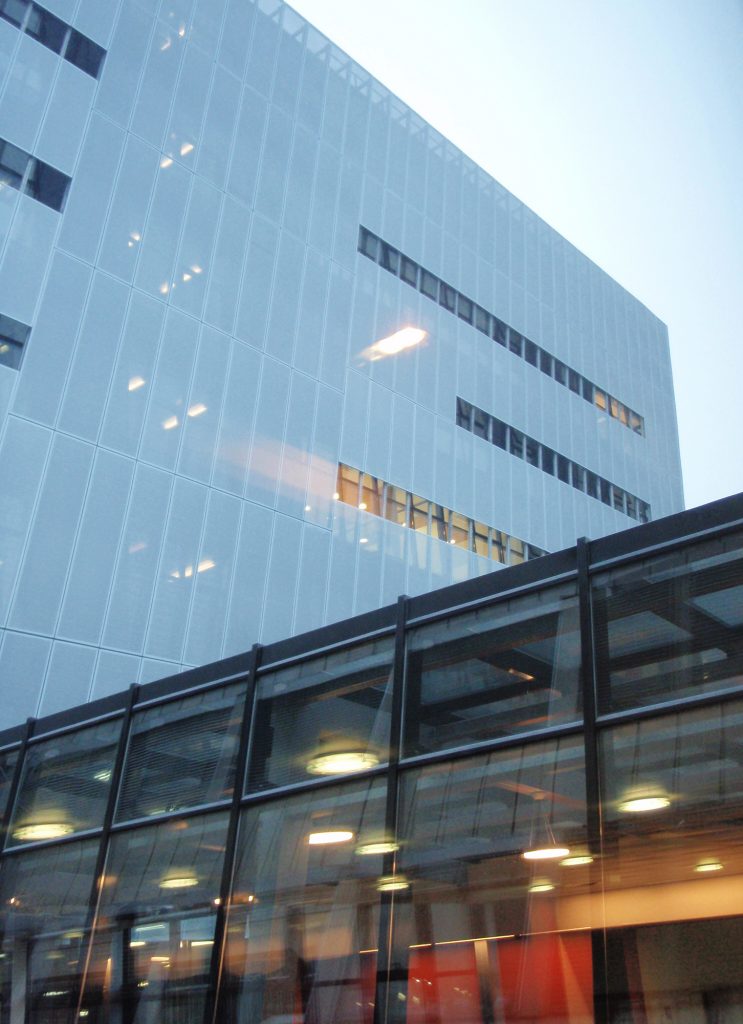 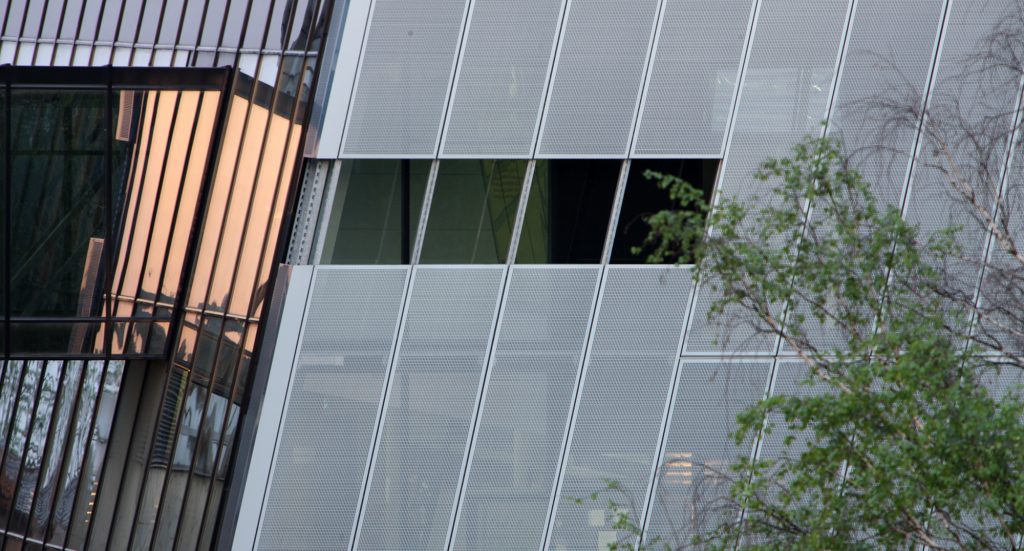 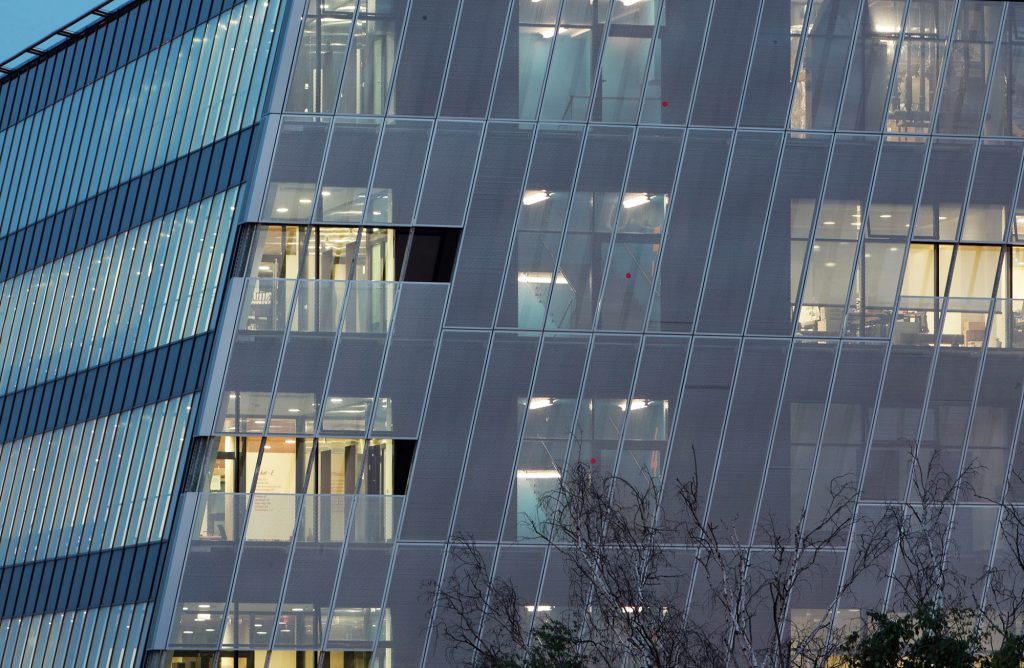 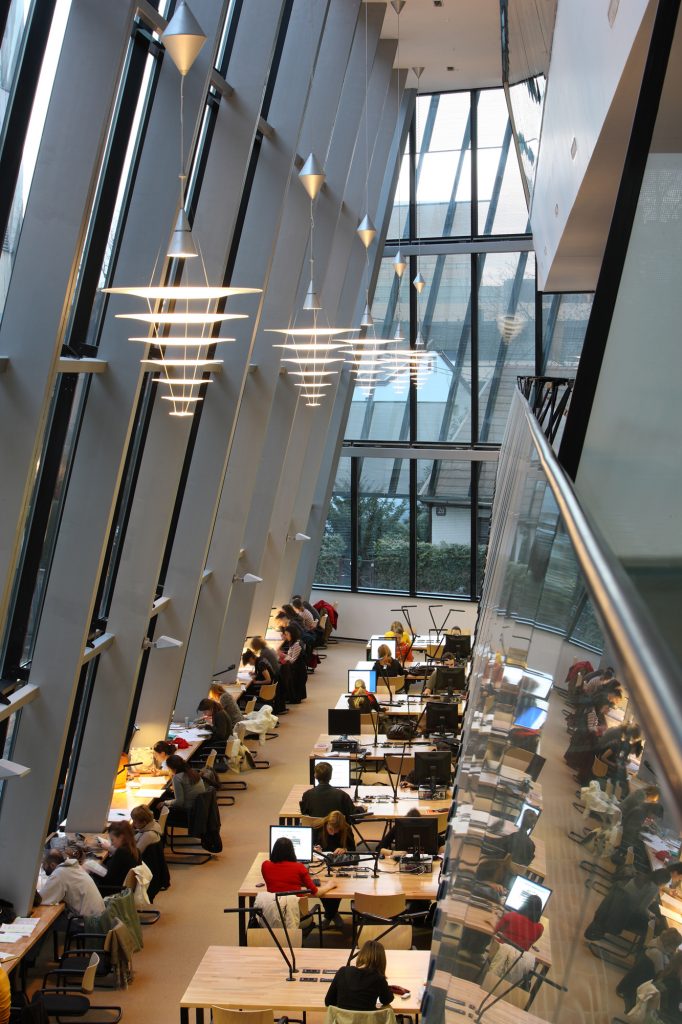 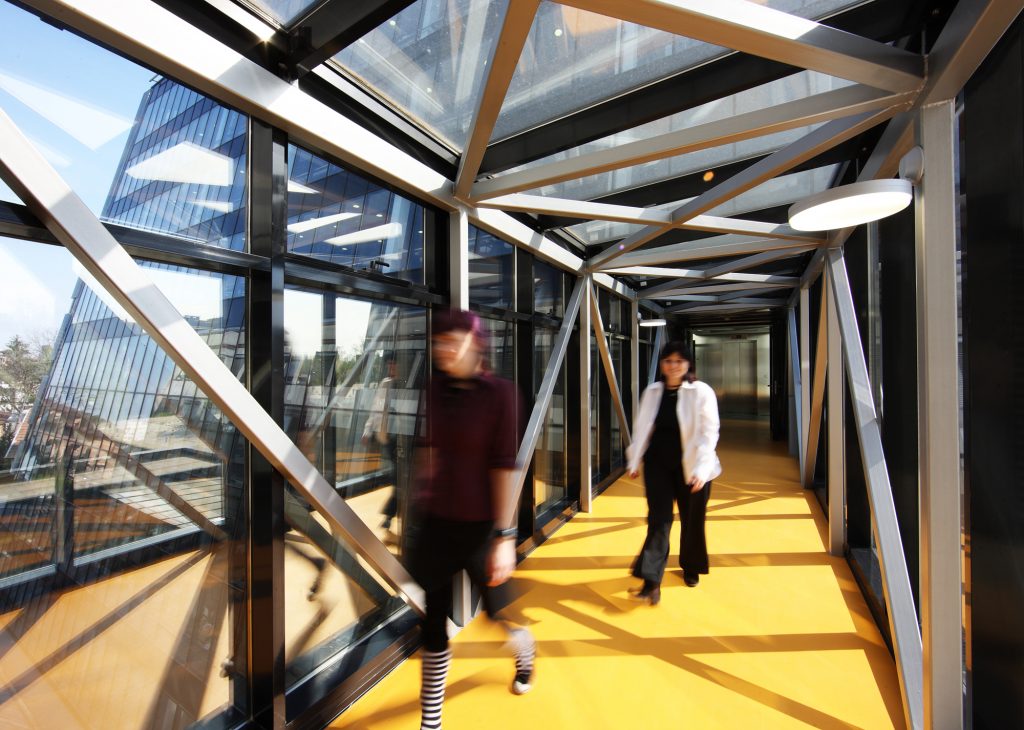 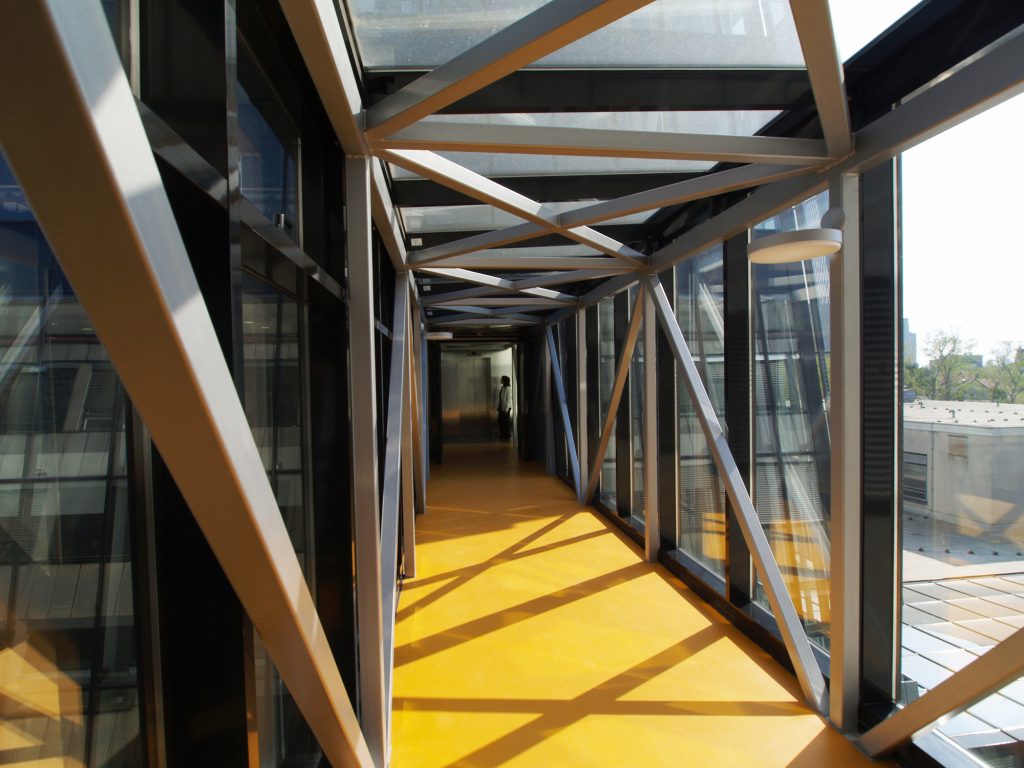 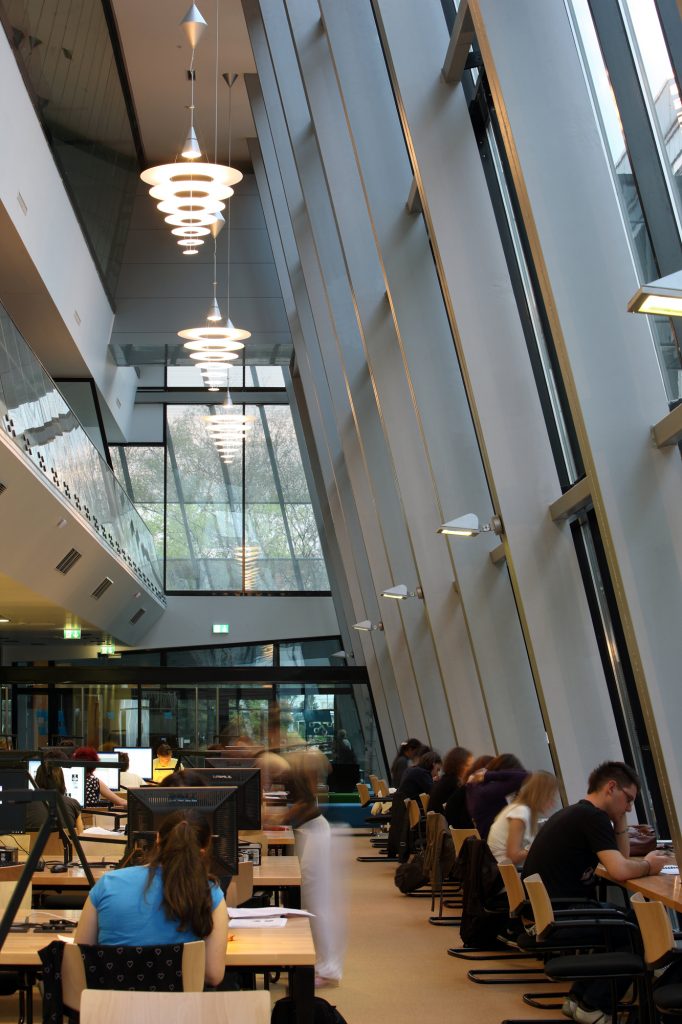 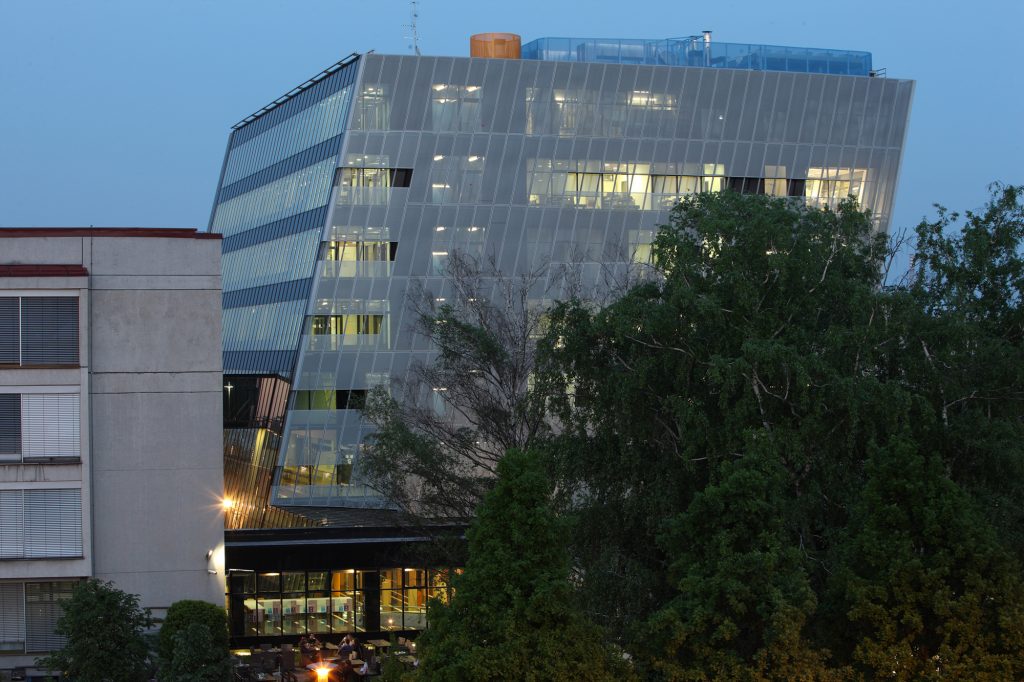 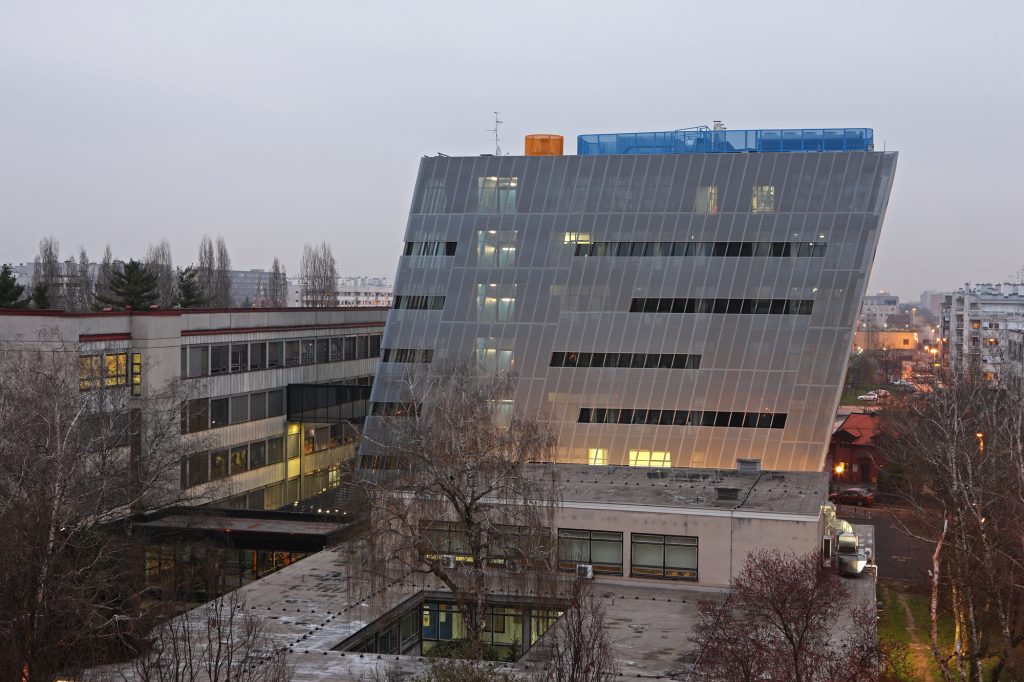 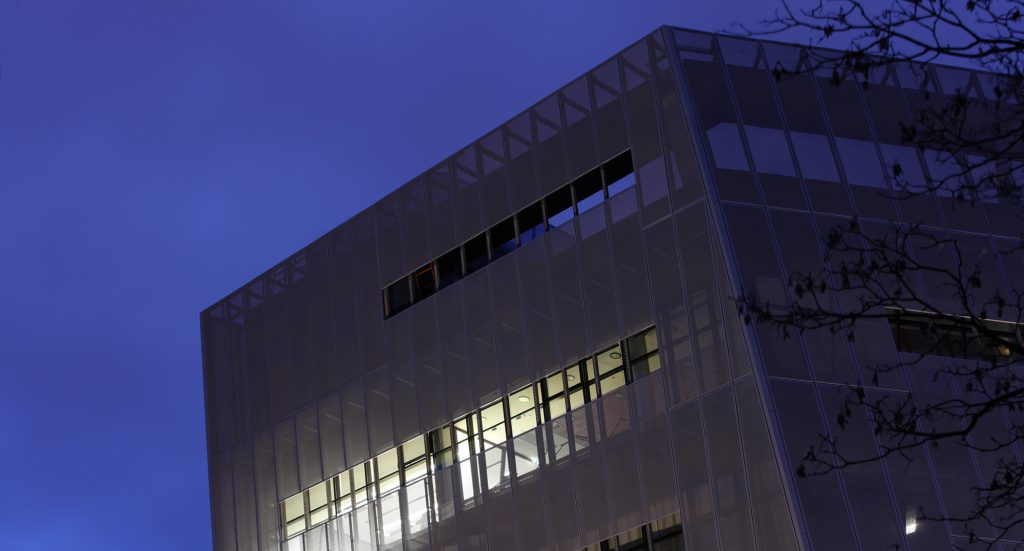 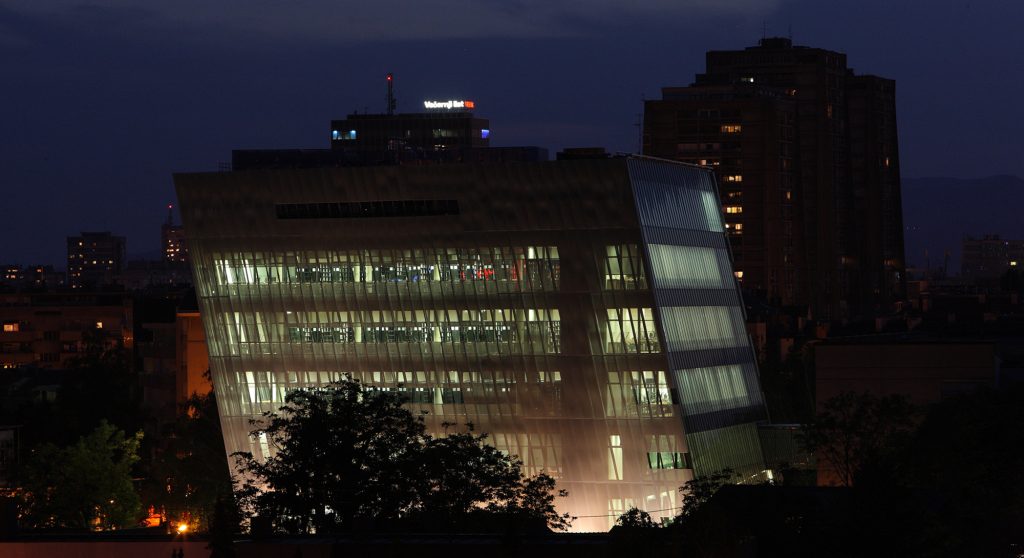 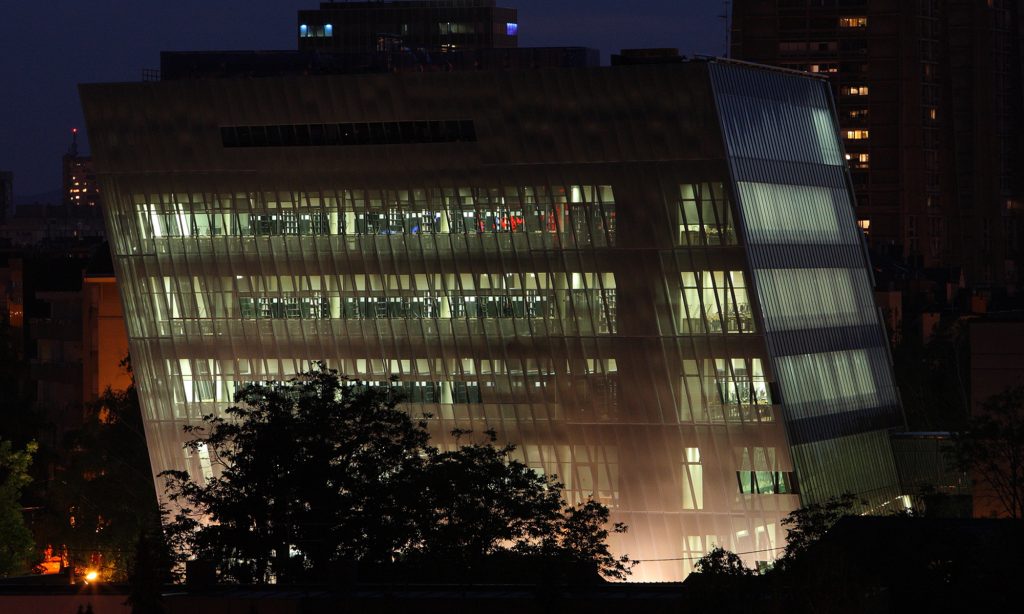 Library of the Faculty of Humanities and Social Sciences in Zagreb