The Llotja Lerida is the most innovative public facilities Catalan province next to Liceu in Barcelona and the National Theater of Catalonia, is the third largest Catalan cultural facilities capable of hosting any large-format show.

Designed by architect Francine Houben, Mecanoo by the Netherlands firm, which holds its first work in Spain, is also a remarkable urban operation, since it revalued the right bank of the River Segre with ecological and sustainable project.

Looking to root the project in the natural memory of the place, the Congress Center acquires the image of a huge sandstone acting as an intermediary between the mountain and the river Seu Vella.

The palace of dialogue and culture, as they call in the area was inaugurated on January 21, 2010.

The landmark building stands as a great architectural body, surrounded by a large overhang, changing the skyline, as well as provide a new overview to establish a visual dialogue between the environment, the hill of the Seu Vella and river.

The cantilever is capable of providing the necessary flexibility for any combination of events such as conferences, exhibitions, theater performances, meetings and trade shows. Interconnects all the pieces around a large hall that surrounds the building in their top floor, preserving the independence of each space. It also allows different inputs to the auditoriums.

With a mission to attract the public under the cantilever, is the main entrance. A vertical crack that invites visitors to enter the heart of the building. From this central point of communication is connected to all the functions in are developed.

Located within the vicinity of the Old Central Fruit and Mercolleida, between the railway station and one of the entrances to the city of Lleida. Linda on one side by the Avenue of Tortosa and the other with Pardinyes Avenue Bridge.

The building will reflect the city’s ambition to have a conference center where the meetings are not only professionally but also recreation.

The close relationship of the city of Lleida with the Segre river is enhanced by understanding it as part of river morphology, without seeking the continuation of the urban structure. This will make the city nearest the river, designing the site as an extension of the existing pedestrian

The 37,500 m² of Llotja are presented as a unitary and massive project from the monolithic view, yet with a hierarchical program divided into three functional groups with different but compatible uses.

A central band distributes the main communications building, which interconnect the various programs through the stair-ramp with stone finishes and relates the luminosity provides interior and exterior através the same material.

The auditorium is the main element, covered with a velvety red skin, is designed for optimal sound quality and a perfect visual perspective from any location, following the foundations and principles of the classic “horseshoe”. An auditorium, equipped with the latest audiovisual technology With 852 square meters and capacity for 1,000 spectators.

The entrance is from the “foyer” main located at the altitude of flight. From there, it enjoys a perfect visuals of the old part of town, crowned by the Seu Vella.

These spaces offer opportunities airy and flexible to different needs with spaces ranging from 20 to 80 square meters that can be enlarged and additional independent inputs, so they can function as independent pieces.

The building is structured in six plants, two of them underground and four above ground.

These plants are dedicated to parks and have a capacity of 471 seats.
Level -2 in the logistics area is dedicated to the stores, dressing rooms, the stage floor and the kitchen. A lift connects the kitchen of this plant with the restaurant downstairs

The semi-outdoor space protected by large overhangs, designed to offer shade the hot day or protection from rain, hosts various functions, such as main entrance, lockers, shops and a cafeteria-RESTAURANT there.

This plant has been minimized to make room occupancy public open space available to the city, including 15,325 m2 square where you can enjoy different activities.

From the main entrance, the audience reaches a broad hallway that leads to the central area of the building, which open on a set of circular skylights.

This is the space where they communicate most public spaces in the building: cafeteria, restaurant, shop, cloakroom, information desks and registration of delegates, and so on.

It covers an area of 887 m2, a diaphanous space where congressmen and spectators. In the case of the simultaneous holding of public events can be accessed from different entrances.

Here are located function rooms, a theater auditorium and conference rooms with capacity for 400 and 200. These facilities in turn offer the possibility of being subdivided into rooms for 50 people.

This facility also offers several exhibition halls, the foyer, a center of
business club The Llotja.

The “foyer” was designed as a ring around the building with a width of 14 meters, generating a column-free area of over one thousand square meters and different entrances leading to the main auditorium and the room of 400 attendees.

It is a unique complement to the function rooms, suitable for installation of stands of products or services and cocktail service and meals as well as a vantage point from which to contemplate the landscape.

The cover is a new public space, a square in the upper level, which is configured as a viewpoint from which to observe the environment Segre, an outdoor space for guests of the Club La Llotja with city views.

Climbers cover part of the surface and allow the cooling of the roof of the building in summer and pergolas ajar to allow ventilation of the spaces in facilities located in this elevation.

This multipurpose building also houses the branch expansion of agriculture of Mercolleida auction. In one of their facades were distributed grandstands to watch the shows performed in public open space as part of the municipal theater.

The basement slabs are supported by a grid of pillars placed at a distance of 8 meters in both directions.

The slabs of the second, third floor and deck are part of a mega grid ranging from 16-24 meters, the cast is pre-tensioned beams prefabricated concrete and the vertical support walls and pillars are used.

Overhangs around the building are designed to transmit horizontal forces on diagonal walls, the forces are reduced angle. This produces a vertical and horizontal. The result is that the flooring will all horizontal components near zero as the result of diagonal forces is essentially vertical component. This is an effective method of reducing forces.

The roof uses a lightweight steel structure. Only if that light is larger than 16 meters are used trusses.

The interior of the theater has a dark, almost black, enhancing the lighting to the stage and thus avoid possible unwanted reflections. Just stand in the space the seats upholstered in different shades of red.

The floor is wooden and has a small office located on one side of the room to complement the kitchen.

An electro-acoustic system is used to increase the reverberation in the musical events.

The conference room of 400 people capacity is limited by closures of glass and can communicate visually with the multifunctional hall.

In the Business Center glazed facade allows the entry of light and outward visibility.

The roof is a garden that also acts as a thermal controller, with hills covered with vines, which change color with the seasons. The composition of colors on the cover creates an attractive view for surrounding area and the apartments of Lleida, giving new identity in the area.

It makes active use of thermal mass by including in concrete ducts, through which flows hot and cold. So the floors and walls act as almacenadotes elements of heat and cold. The climate of Lleida is much difference between day and night, being well suited to exploit the possibility of free night cooling. The thermal mass is cooled at night through a heat exchanger to the outside air. This allows for free cold storage on the mass and less demand for cooling during the day.

Also the shape and orientation as well as the materialization of the design sought to protect the building from the onslaught of the sun and thus reduce the cooling requirements.

The exterior is clad in stone ocher.

Solar thermal energy is harnessed for heating using a thermal solar collector field of 1500 square meters, positioned on the deck and provide a supply of 70% of energy demand for air conditioning. 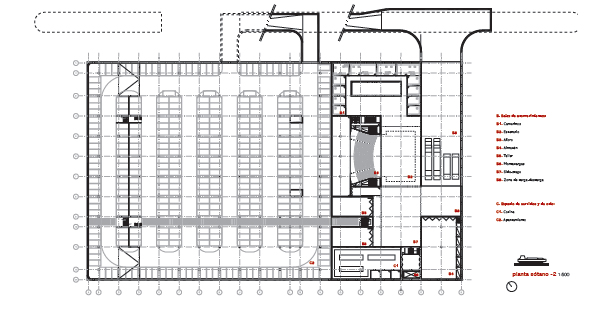 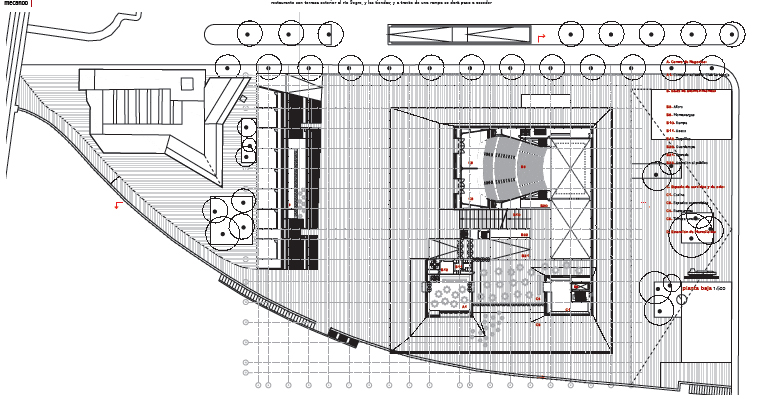 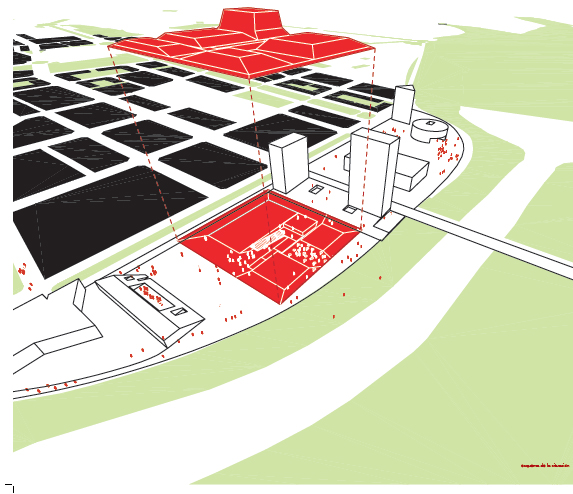 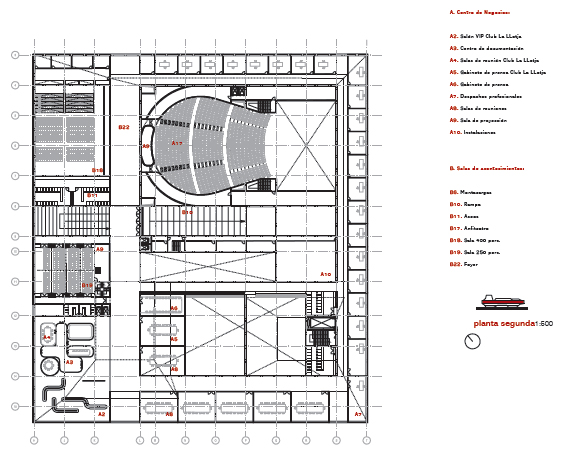 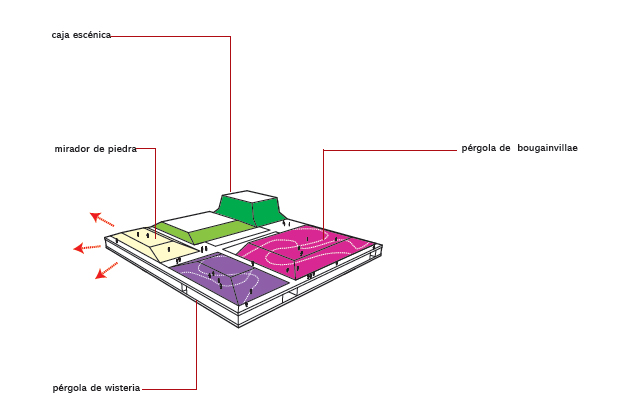 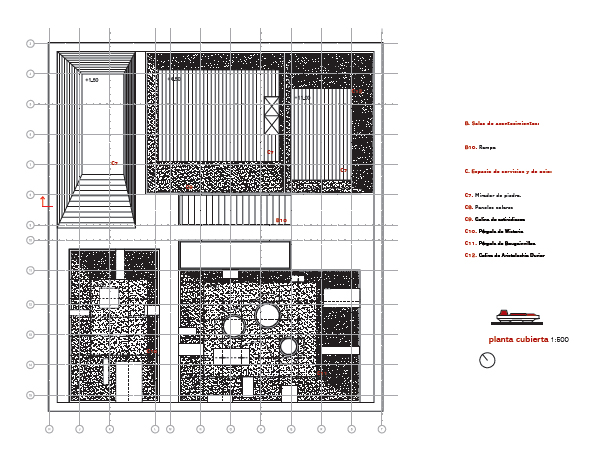 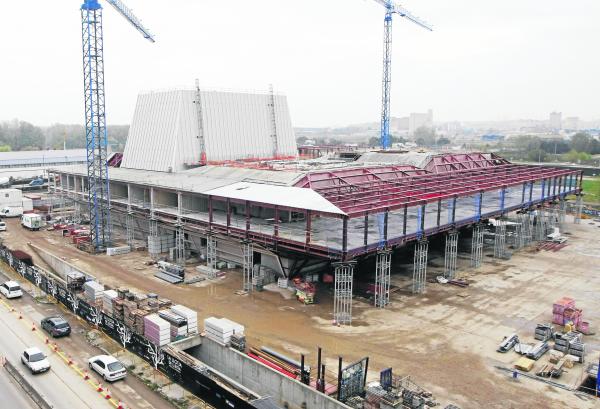 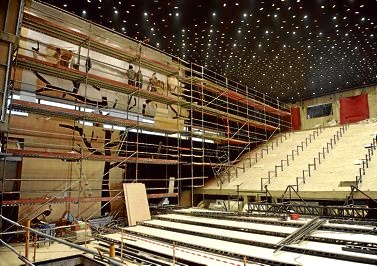 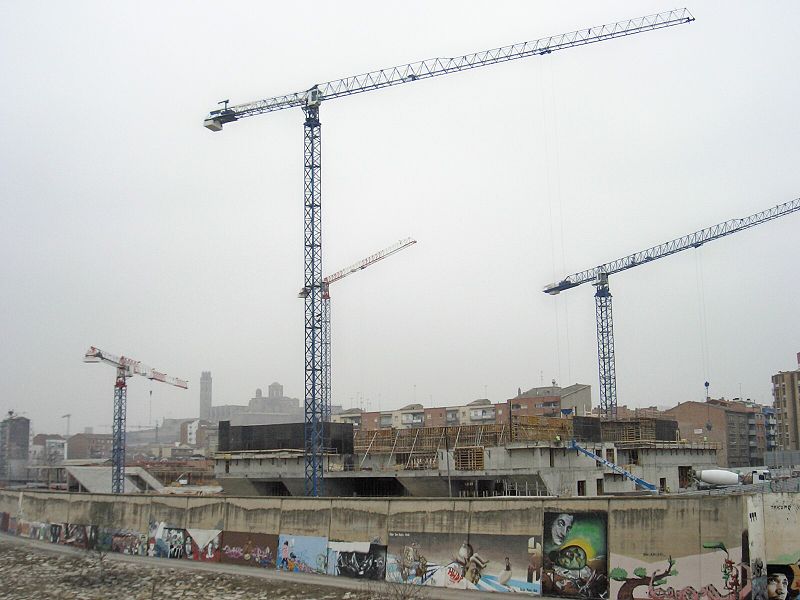 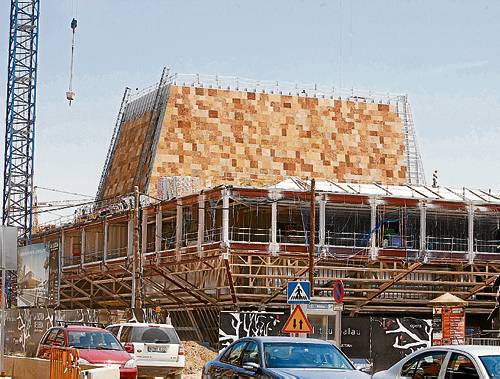 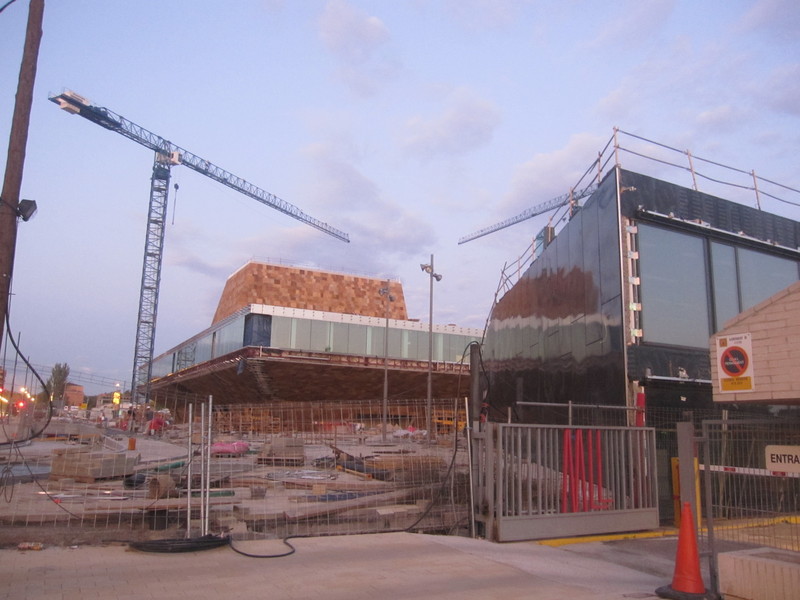 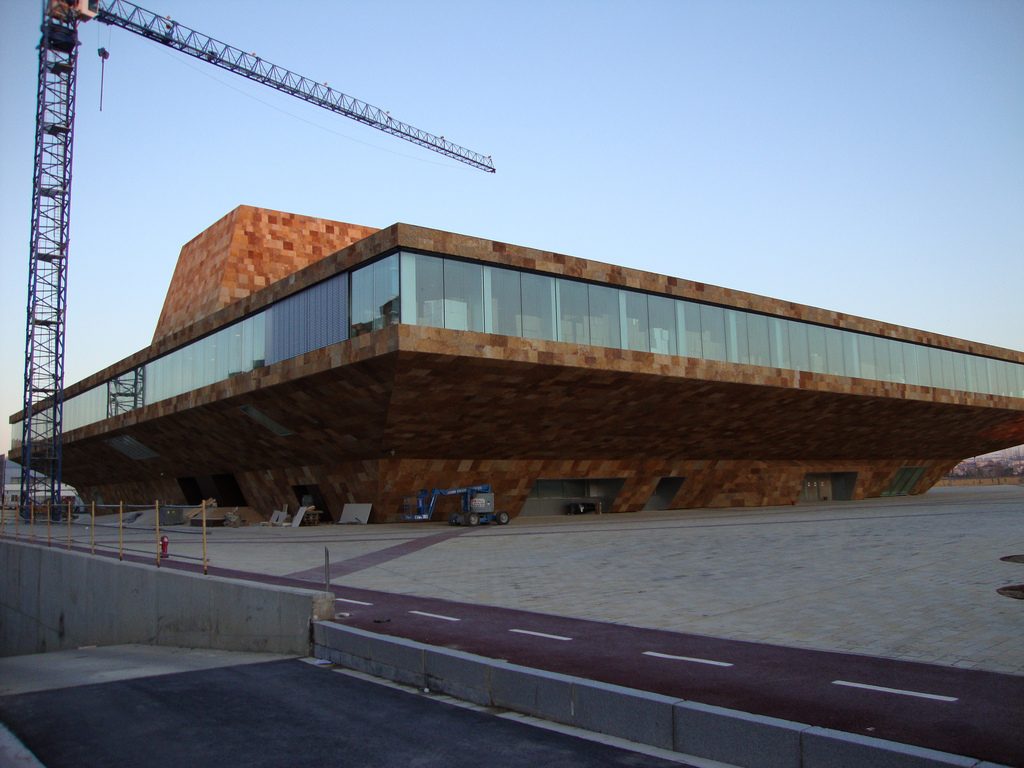 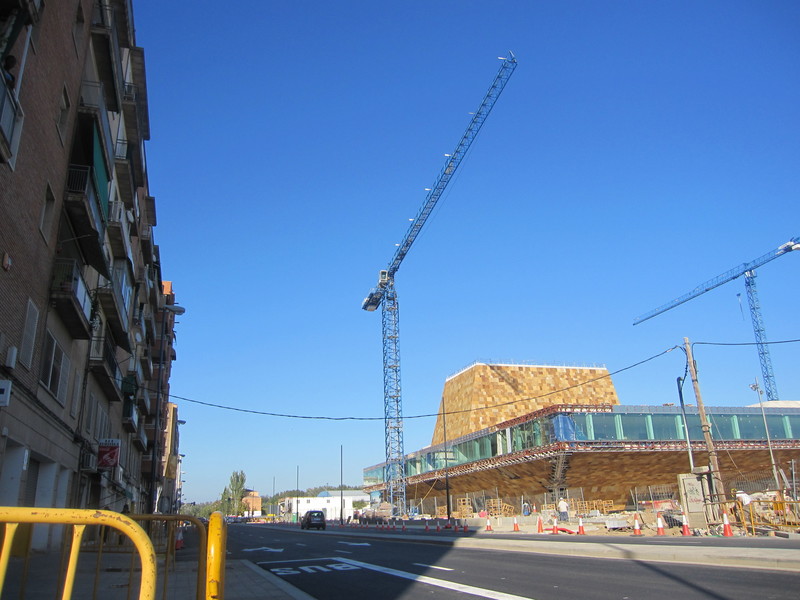 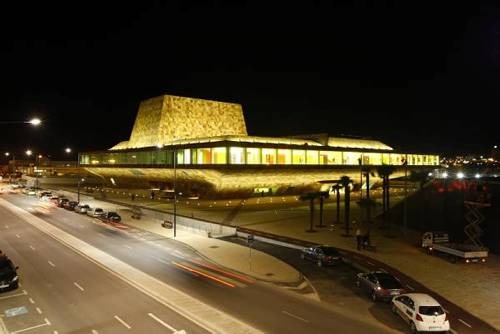 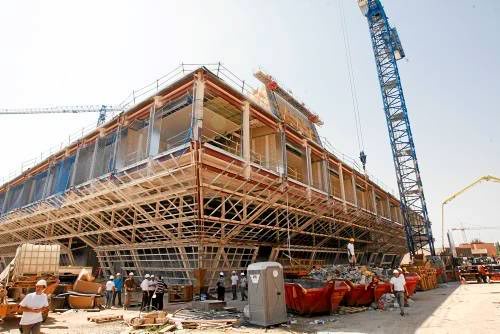 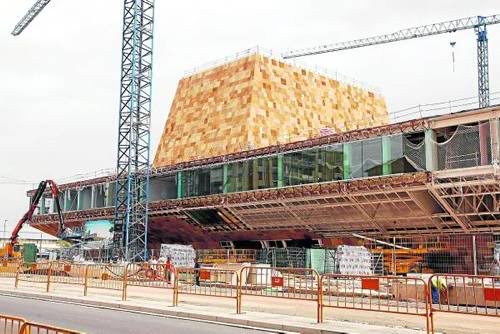 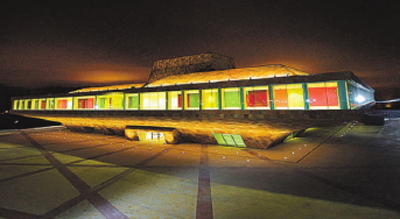 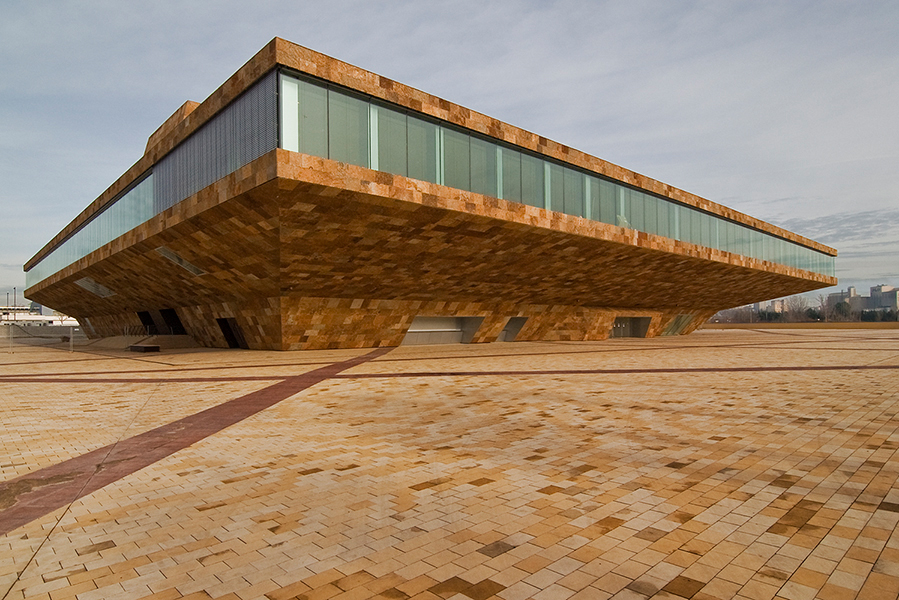 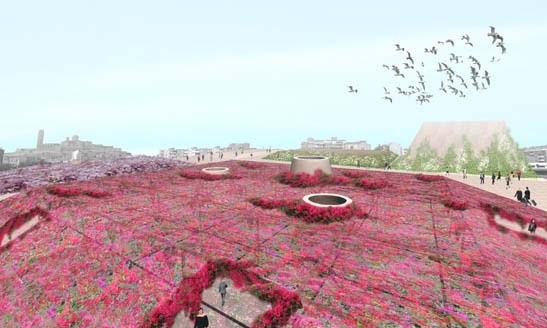 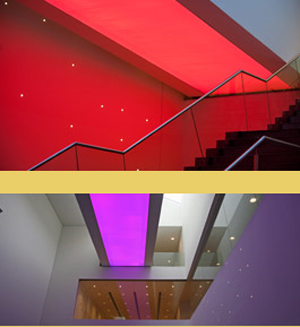 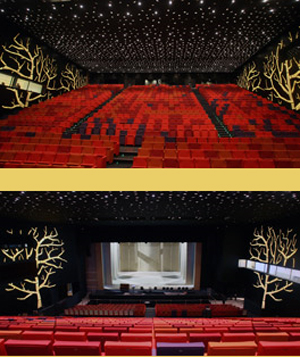 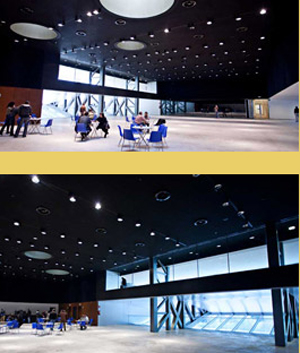 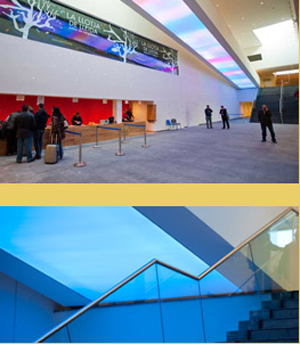