Lecture at the University of Vigo

In the bold proposal from the City University of Vigo, an element subtly links the old buildings with new ones: the path that winds between the pieces, it adapts to the undulating topography. In the classrooms every detail evokes a natural formation, with the intention of transforming the place into a constructed landscape.

The Lecture or Miralles building, which houses common services for students, classrooms, seminar rooms and administrative offices and associations at the University of Vigo, was awarded the 2004 FAD, the year of its completion, becoming a reference architecture Contemporary Galicia.

The first stage involves the transformation of the great sports area in a wooded area, defined by a large lake, which can blur the access infrastructure, to transform into a driveway through the trees, then get the new series of buildings, student services, shopping, swimming pools and gyms, constitutes a series of community sites in the form of places that rely on any of the existing buildings. Minor alterations to the topography permitted the construction in public places.

Three squares, the rector, the shopping area and access to services for students, for connecting the new entrance area with the new student residence. This will redefine the upper bound of the campus, an almost horizontal, which will allow the necessary concentration of activities in which it is easy to think that there will be that necessary intensity of communal living and sharing.

From this first cooperation should be based on a so decided, the regeneration of the natural landscape of the area over a period of time not too long, you must rebuild the ideal character of the place.

The above text was written by the architects in 1999 in regard to the entire campus.

The curvature of the exterior walls with its layout looks a dialectical link with the campus road network to the time he stepped profile accompanies the interior corridor along the different volumes of the building.

The inner facade consists of a sinuous profile and complex vertical holes occasionally interrupted. From this facade starts roof slope which ends at his coronation with a complex geometry that allows the entry of natural light in classrooms and interior corridor. These facades become visually opaque solid metallic appearance while the external accompany the apparent disorder transmitted by the inland bays.

The new classroom building campus of the University of Vigo is a complex construction, both in their own architectural design as in the dialectical relationships established with its immediate surroundings and the road system that ties it all together. From a basic design, consisting of a high body supported on a ground floor arcades, generated a series of successive built bodies that stand between the stairs to the upper level, clearly differentiated in their internal guidance although apparent unity on the exterior facade. The cross section of these volumes reflect with some fidelity the complex relationships established in the interior, with a constant debate between public and private.

The architects proposed two lines of work, apparently opposite, but revalued two qualities stand out and existing in place.

: To enhance the natural character of the place with its great location and topography, while searching for the exploitation of inland valleys for students to enjoy the landscape character of the place, take your silence and intensify their work in a concentration or ideal place to produce.

: New buildings must insist on the definition of community-college life.

The basic body of the building of classrooms is formed by a single plant resting on a lower level arcade and two bodies each has a staircase that allows access from the ground floor exterior.

The classrooms are lined up along the interior corridor of the successive body in the classrooms. In front of the classroom runs overall distribution corridor and between the exterior and a small grandstand is generated in some cases part of the seats equipped classrooms and other public spaces created.

We had to make a large movement of land for construction of a flat elevation invented.

The upper floor consists of several bodies, is supported by an arcaded ground floor, generated by bipod supports that meet the structural support of the outer bays of these bodies, whose geometric order, in contrast to the apparent disorder that characterizes the provision of supports of the internal bays.

The system incorporates two orders lower portico of support differ substantially. In the outer band, a set of studs in the form of inverted V, subjected to a rigorous geometric order of design and distribution. By contrast, in the band generated a messy interior forest of pillars, a small section and provisions oblique, which gives the building a certain image of provisional.

Stages of implementation of the classrooms you: concrete, foundations, columns and slab-bridge, installation of metal roof structure and subsequent placement of metallic tripods while desapuntala forging.

Exposed concrete structure on the outside, combining texture and color with wood frames or dark ribbons of the exterior facade.

In the interior wood panels were used on some walls, floors and stairs. 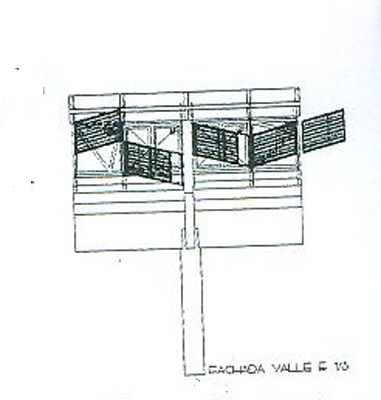 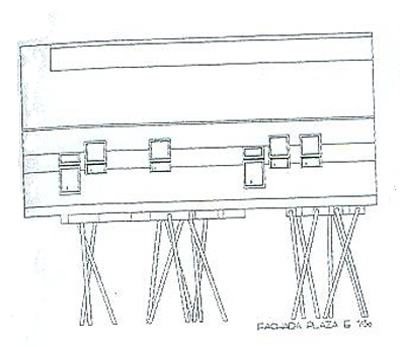 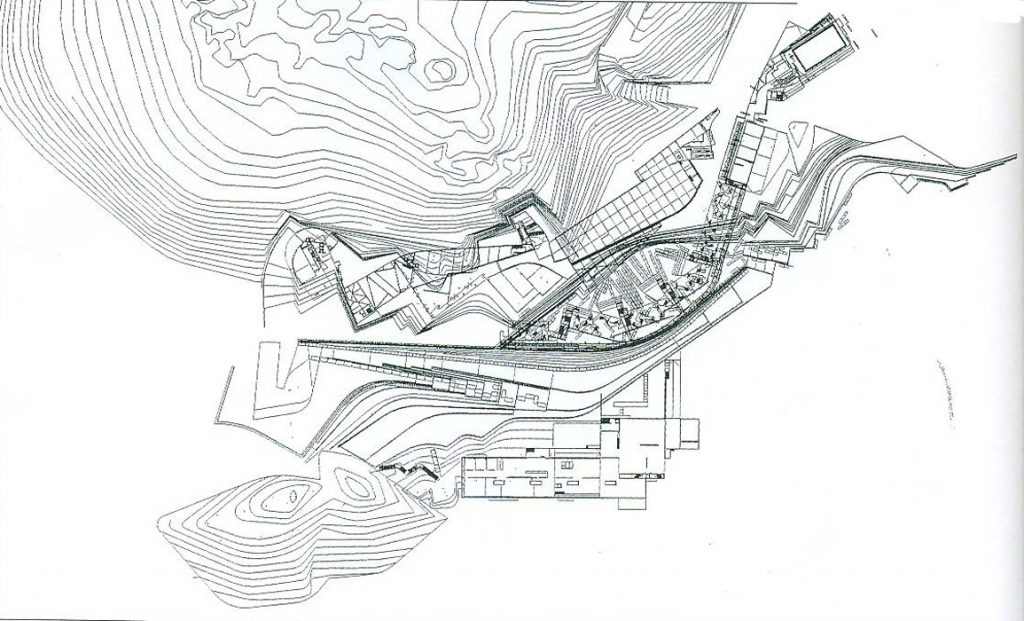 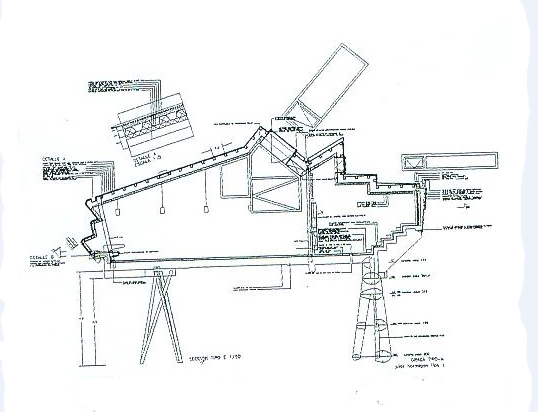 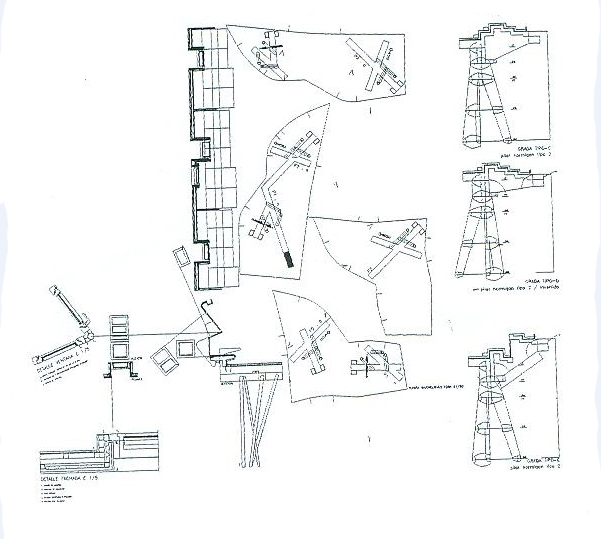 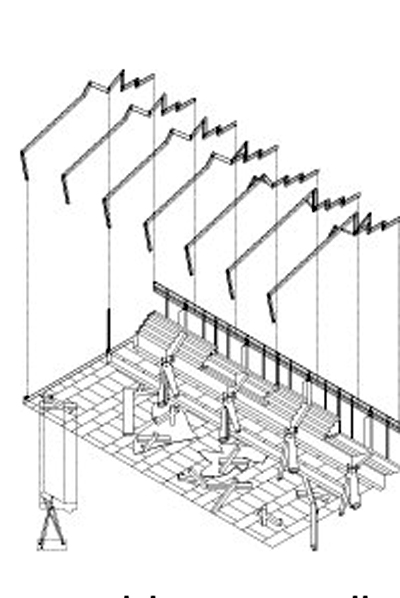 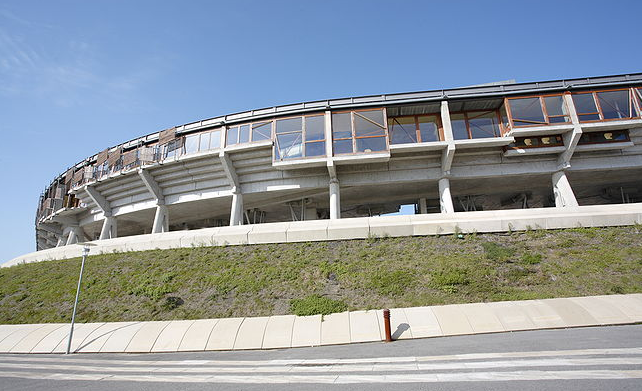 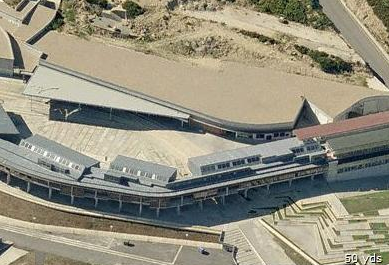 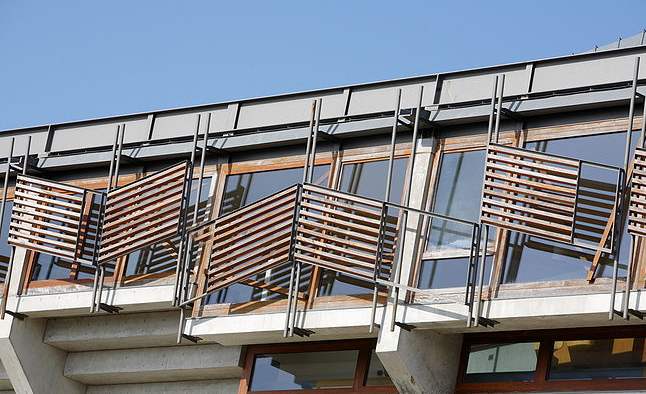 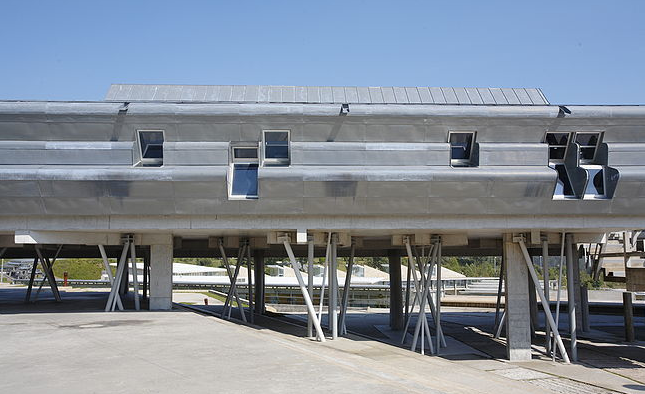 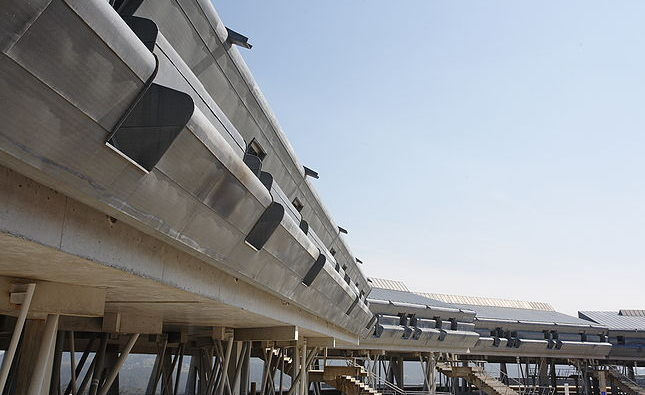 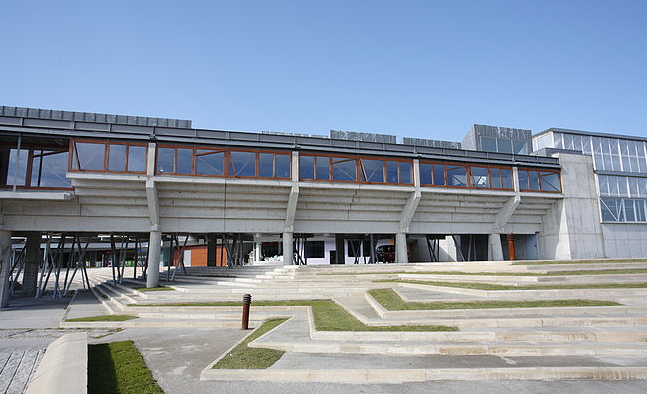 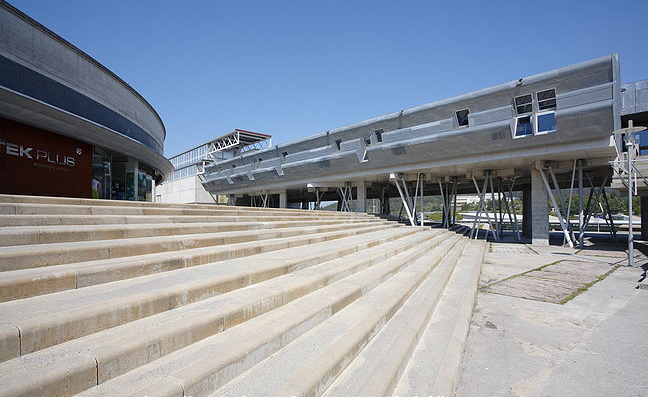 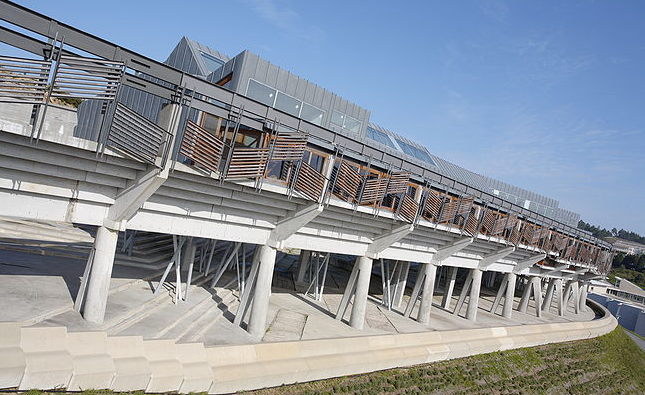 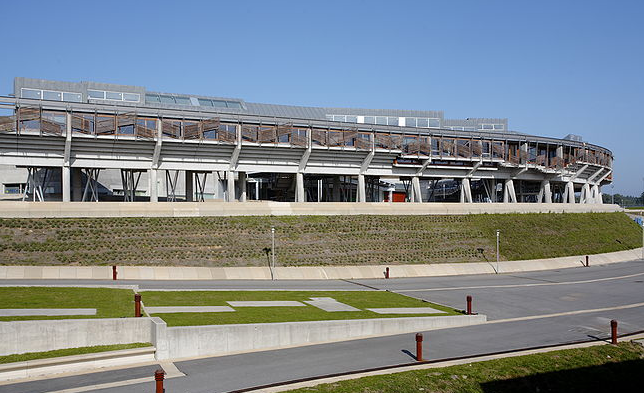 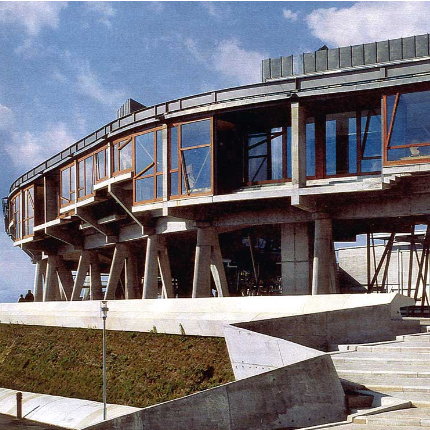 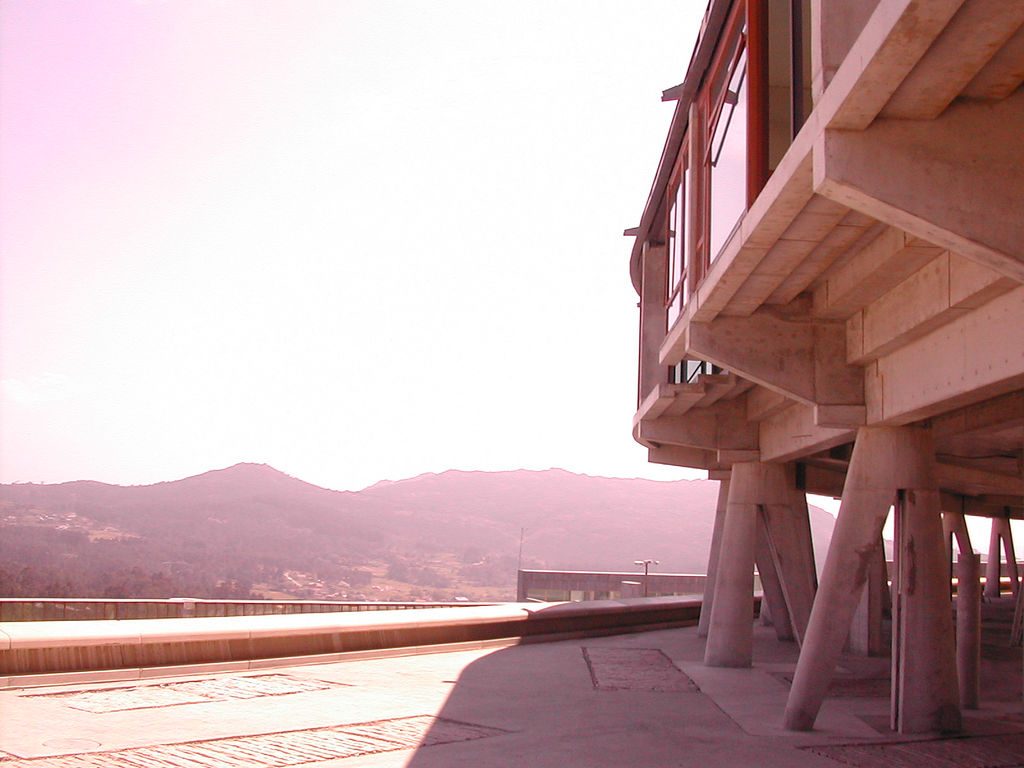 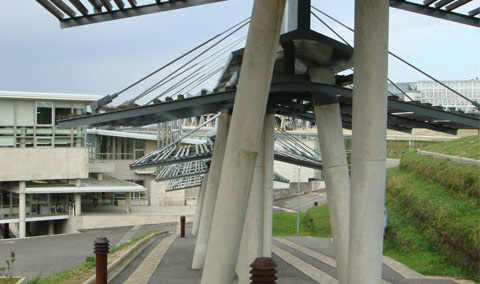 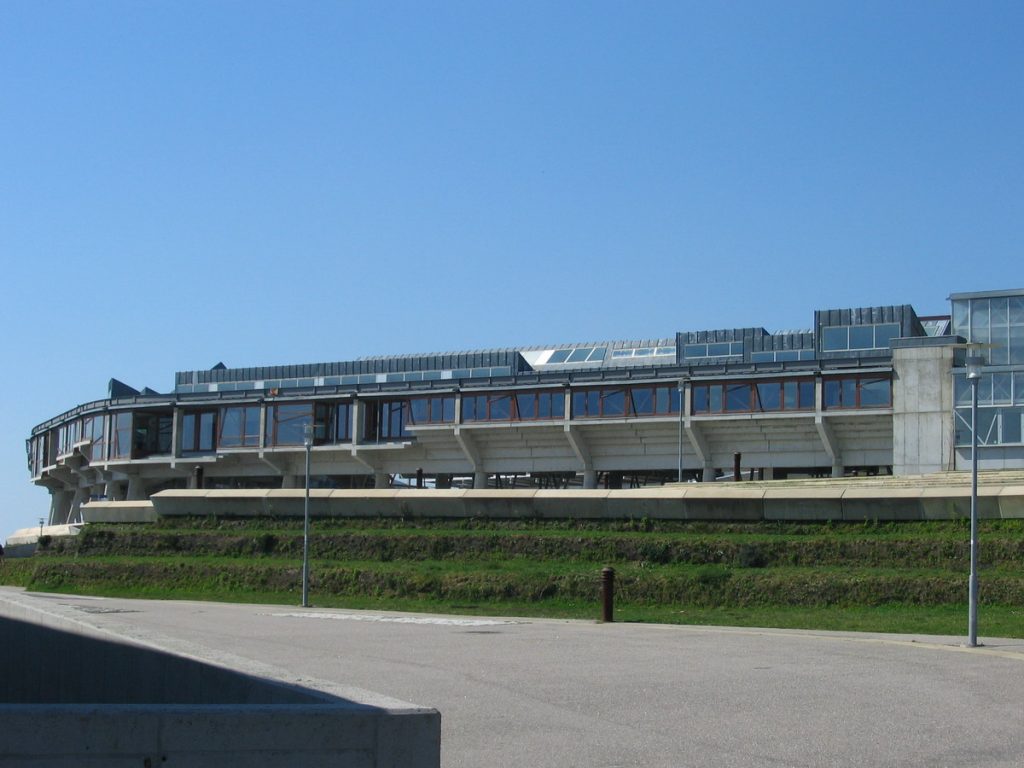 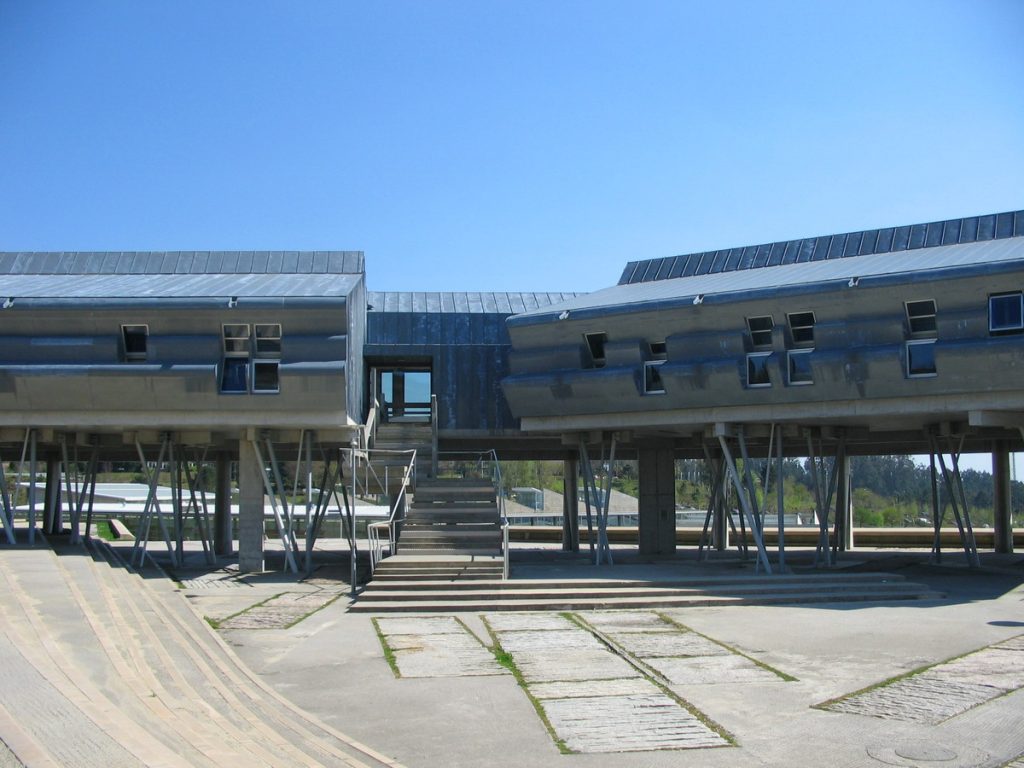 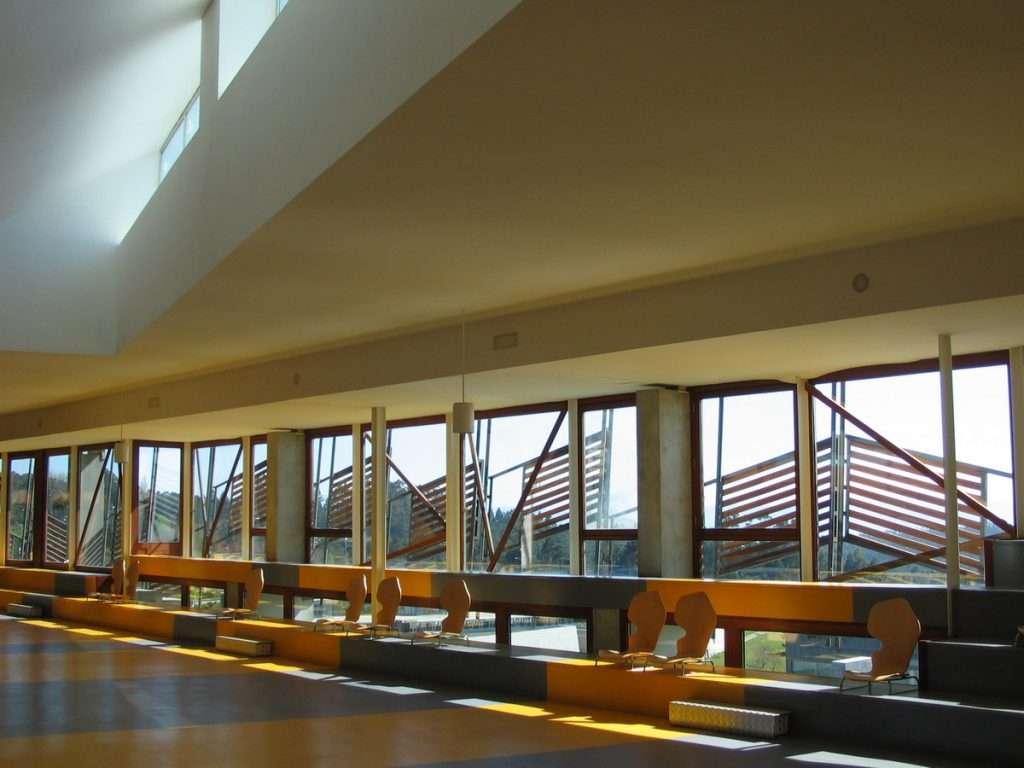 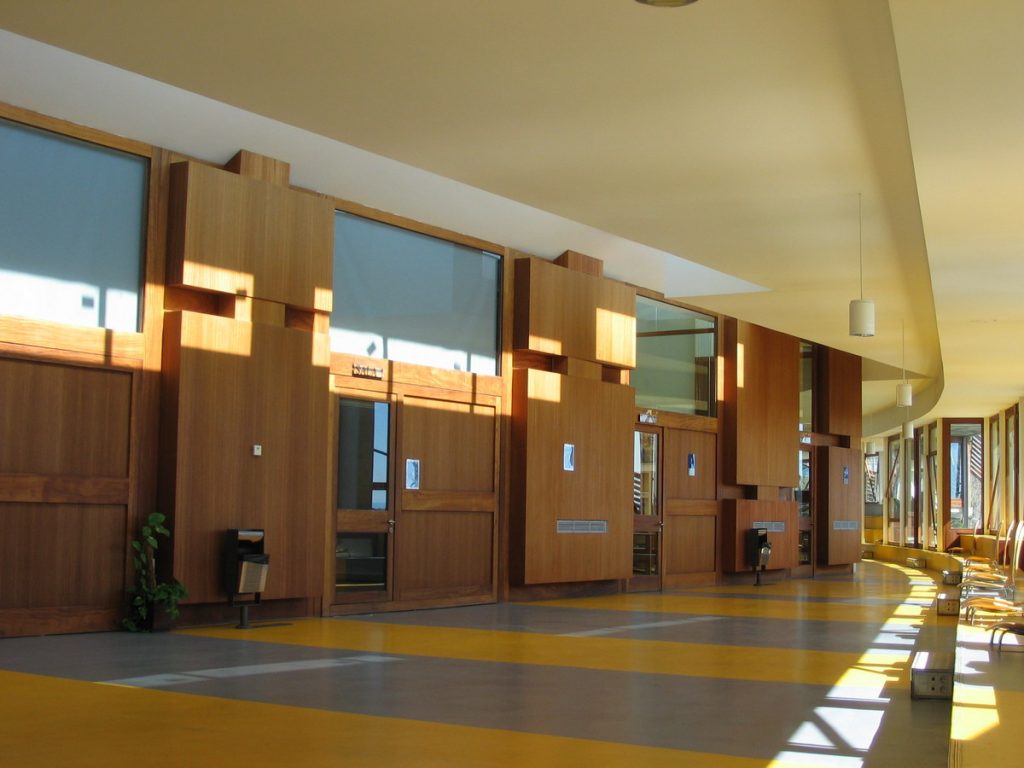 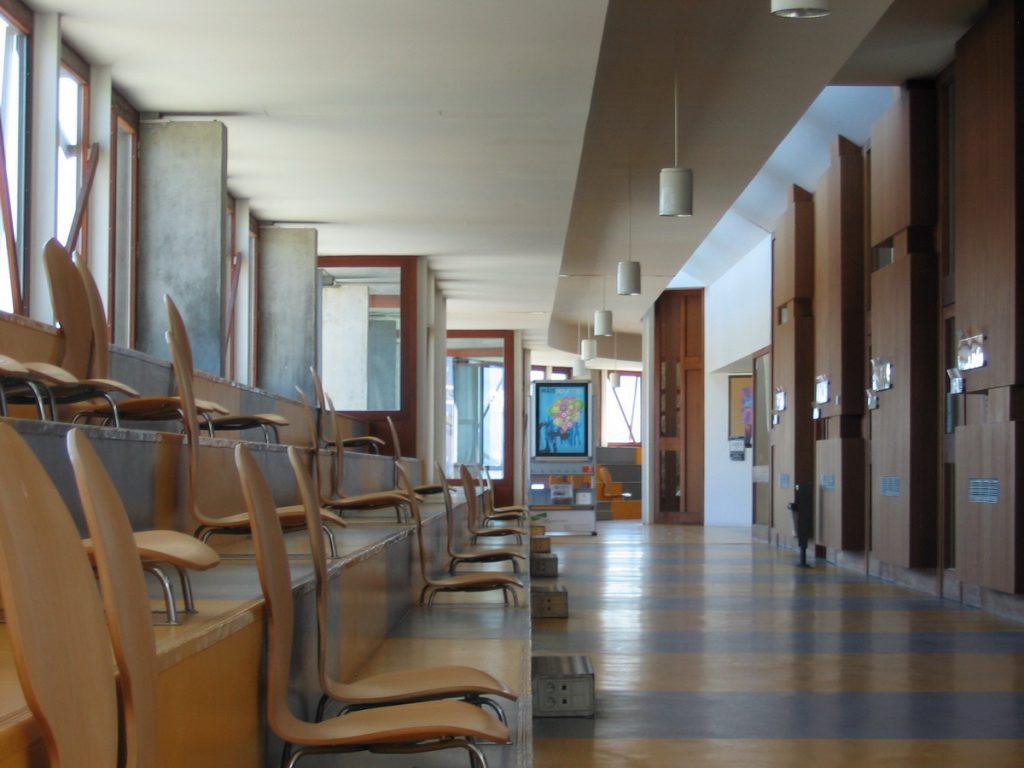 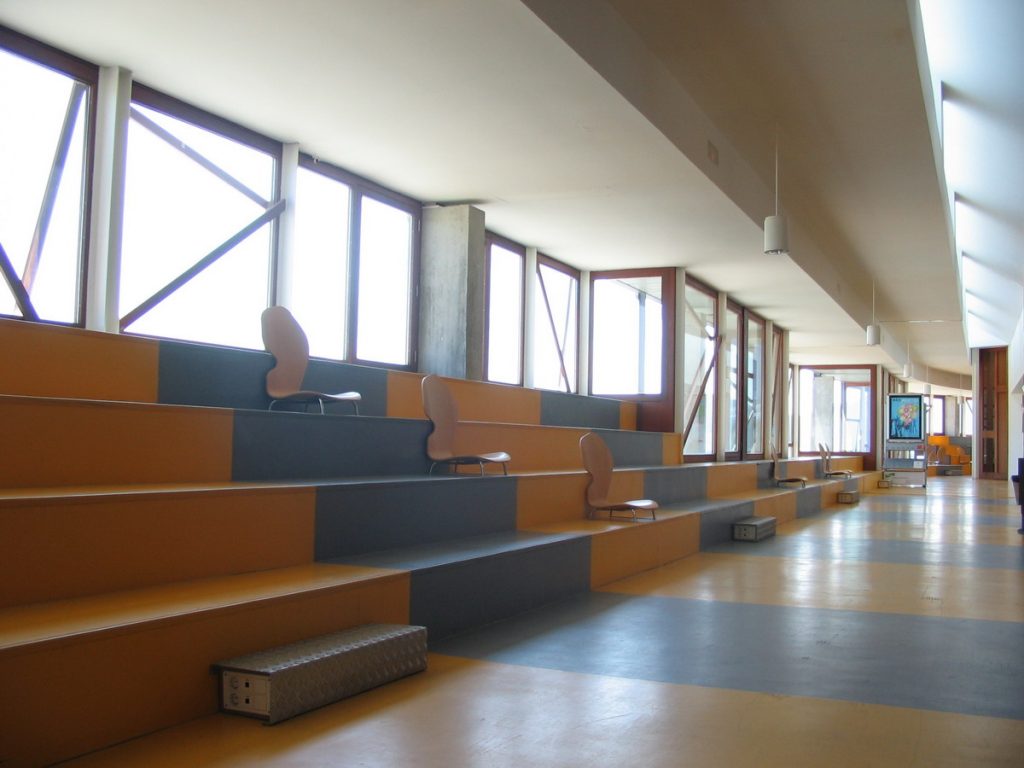 Lecture at the University of Vigo