Since the end of the eleventh century and over XII, James led the way for a desire to build that allowed a significant deployment architecture. This is how monasteries, abbeys, basilicas and collegiate appear along the pilgrimage route and have a total of Romanesque maturity, magnified by the new sculpture that proliferates in the cloisters and facades.

The cathedral was built by the faith of men, starting point of the “Podiensis” one of the ways of Saint Jacques de Compostelle.

The Road to Le Puy, also known as Route Podense, or Podiense Podiensis, is the most important and ancient roads of France in Santiago.

City of art, artistic and cultural center, a place of encounters and exchanges.

Its location in the center of a department with wide open spaces, makes it an ideal starting point to discover a region that offers the full range of leisure in the countryside.

Proposes numerous and varied events throughout the year.

The great religious buildings of this period grandiose monstrosity and sometimes very ambitious. In the second half of the twelfth century, the cathedral of Le Puy was expanded in response to marine cult did not cease to grow and are concentrated in one place. Original two sections were added on the west side of the nave. High on a gantry important preceded by a monumental staircase that served to bridge the gap of the field.

The Portico of the Charter of Our Lady, the end of the twelfth century and the beginning of the thirteenth century, located between the aisle and the south transept arm, has a large arches folded concentric arc isolated for decorative purposes, joined the three upper arch small pieces. A solid masonry of great thickness maintains, to the southeast, while the voussoirs, on the other side, resting on pillars or striated columns that are based on rectangular bases.

The cloister, in the second half of the twelfth century, adjoining the north aisle of the cathedral, has a rectangular plan with four arches covered by galleries that open edge of the yard through a series of arches supported by some carriers surrounded by Columns townhouses.

The square bell tower, located on the outside of the head, in its northern side, dominates the building from its 56m high. Retranqueados levels and high skylights make it look like the bell lemosines. On the right stands the dome of the cruise, completely rebuilt by the architect Mallay in the nineteenth century.

The dome of the nave, around 1150, has eight caps and is perched on the horns of the fourth area whose center was blown up. North and south a few large openings between the tubes illuminate the ship.

Rises to the front end of a monumental staircase and the floor doorways topped by three different levels. The appearance of solid walls is lightened by the blind arcades and false niches. Alternating voussoirs and spun dark and clear, and the inlaid stone white, red and black, is one of the most original buildings of Romanesque Velay.

The galleries of the cloister, adjacent to the cathedral, built in 1150, presented a prolific carved decoration, complete with a polychrome rigging a beautiful decorative effect. Some capitals historiated include characters or symbols of the evangelists, but the most common are decorated with plant motifs. Its geometric decoration with scrolls, foliage and interlaced characteristic acanthus leaves. 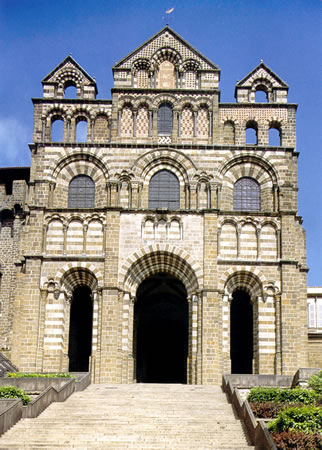 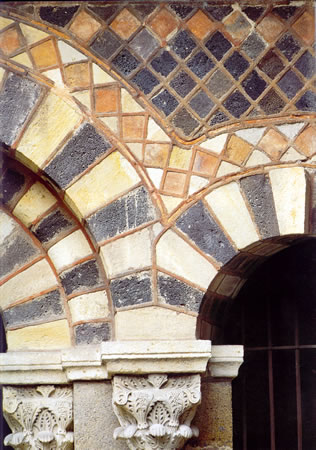 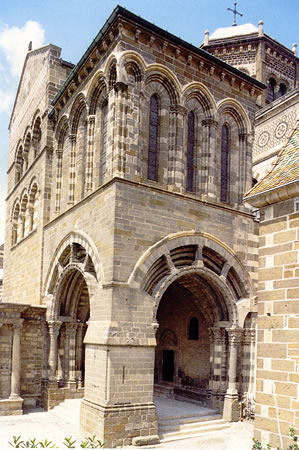 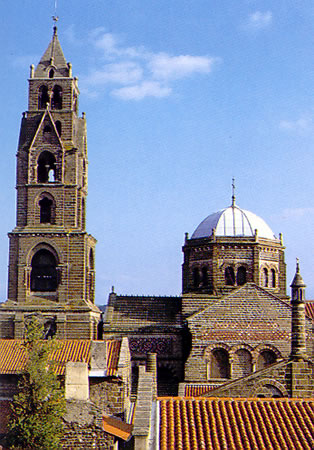