With the exception of the two Case Study Houses, the small house Koenig designed for Jacqueline and Edward Lamela in Glendale in 1953 gave him more publicity than any other of his early works.

Magazine Arts and Architecture publishes articles on the house twice, the second with photos of the work completed. The house was also named in the San Francisco Examiner.
That same month, the New Yorker magazine Living For Young Home-makers published the project, with an article in which he was referring to the architect Koenig, an indiscretion that led to the immediate dispatch of a telegram to the director of Koenig, Edith Evans, dated Jan 23 1956: “Thank you for your kind article on the house Lamela. Do you mind that you correct two mistakes? I do not have the title of architect. The house cost $ 9,400, not counting the work of the owner. ”

Koenig was aware of the importance of an architect. In October 1957, the Ratings Board of the State of California awarded him the “right to practice architecture and use the title architect.” On December 23 the same year he was elected member of AIA, and in February the following year he joined the section of Southern California.

When, in August 1958, the building was designated as the “House of the Week” in the Independent Neivs-Star, was no longer a new work, but it was the first time that Koenig was able to present a building, and to demonstrate its title. “Despite the construction of glass and steel ‘, Margaret Stovall wrote,” there is nothing cold and desapacible in this contemporary home designed by the architect Pierre Koenig, AIA…».

Is worth repeating because this record of publications, in a sense, demonstrates that Koenig has come of age professionally. It was no longer a young student who was planning his own house, but an architect entitled to a philosophy and published a history of customers.

To some extent, it was more important to publish in newspapers and popular press in architectural magazines, as masque promote its ideas among colleagues, was interested in announcing their professionalism to potential customers. Thus, the small overview on the house Lamela appeared in Sunset magazine in April 1959 had as much value as any ad paid for by the United States Steel in a magazine of architecture, or the article in the September 1957 edition of L’Architecture d ‘Today in which he presented this same work.

The piece that drew much attention he was only 93 m2, but its linear plant and the dense vegetation of its location make it interesting.

Magazine Arts and Architecture published some drawings of the building in January 1954, noting that “the entire structure is steel.” Nearly eighteen months later, in June 1955, the magazine re-released the project, with photographs of the building, again stressing its constructive system: “We use the steel so that it can obtain maximum performance and cost savings. “Taking into account that possibly was Koenig himself who provided this description, or perhaps even the same sentence, it is clear that gave great importance to the use of steel. The popular press does not missed the news and rushed to use the house Lamela, along with the buildings of Sorianoy Raphael Archibald Quincy Jones, among others, to address the issue. Under the title “There could be a house of steel… in his immediate future, “Barbara wrote in the East San Francisco Exa-miner that September that” as material, the steel is about as American as apple pie. ” In February 1956, Esther McCoy wrote an article in the Los Angeles Examiner, Pictorial Living on the interest it aroused the construction of steel buildings throughout the world, linking the house Lamela with other homes in Mexico and Australia.

According to Koenig, “steel material is a neutral, but not cold, that is half to open our houses to vegetation and allow the sun comes into our private patios.”

In July 1957, Esther McCoy, this time for the Los Angeles Times, had avoided referring to Koenig as an architect even though the article was titled “In what I believe… A statement of principles for architectural Pierre Koenig.” Lamela using the house as an example, explained to readers that “Koenig prefers to describe the structure in sight because it reduces costs and is aesthetically acceptable.” And again he quotes: “A good housing has nothing to do with the construction of steel, but this material offers better solutions. ”

The steel structure of 24×6 meters and took the same technology and scale modular house itself Koenig, located farther down the same street.

The solar slope allowed to place in the garage overhang at one end and at a lower level in the main level, the plot of 3 meters facilitated open the floor to enter a courtyard within the structural system, blurring the distinction between interior and exterior space.

All this, combined with the natural canopy of oaks that populated the area, increasing the sense of domestic space far beyond the usual limits. Being designated as “House of the Week,” says Margaret Stovall transparency of the plant: “The building of 93 m2 adapting to solar dotted with oak trees with the same ease as a hut made of wood, offering a lifestyle interior-exterior that his predecessor never could have imagined. “ 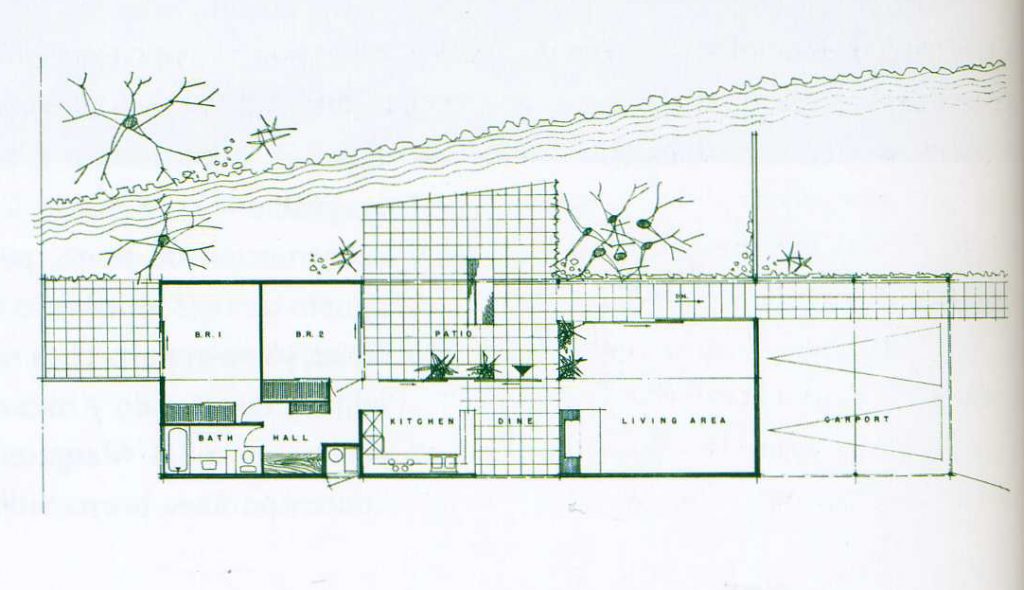 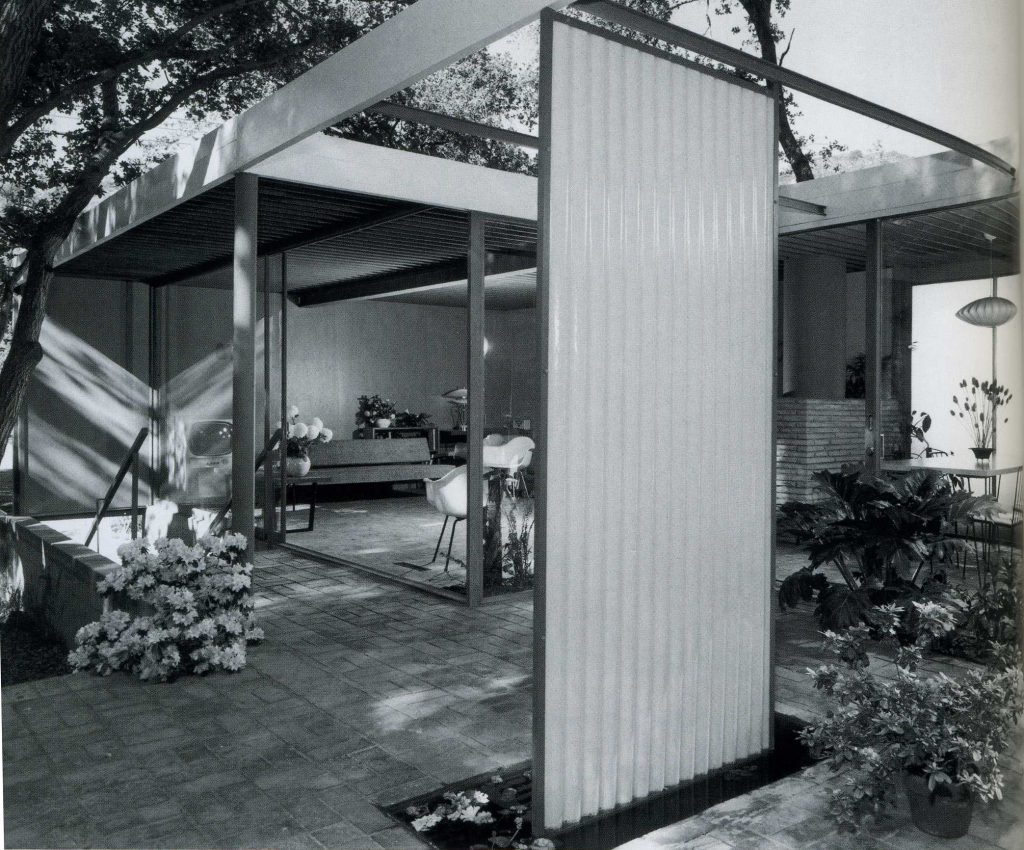 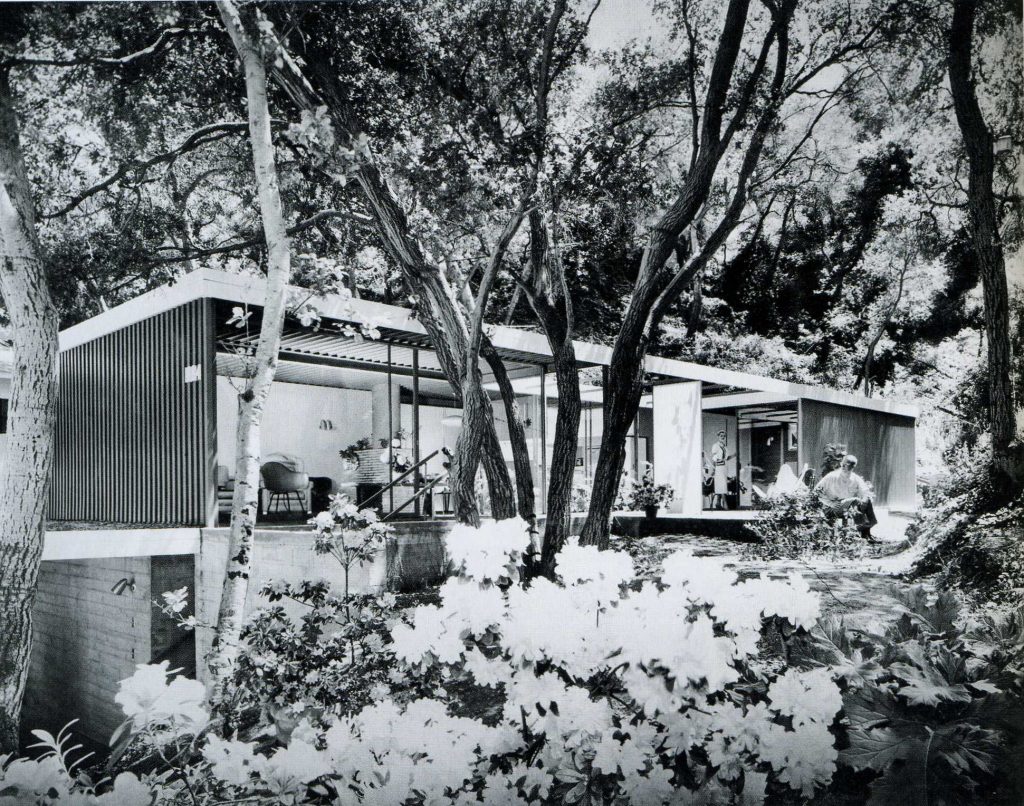 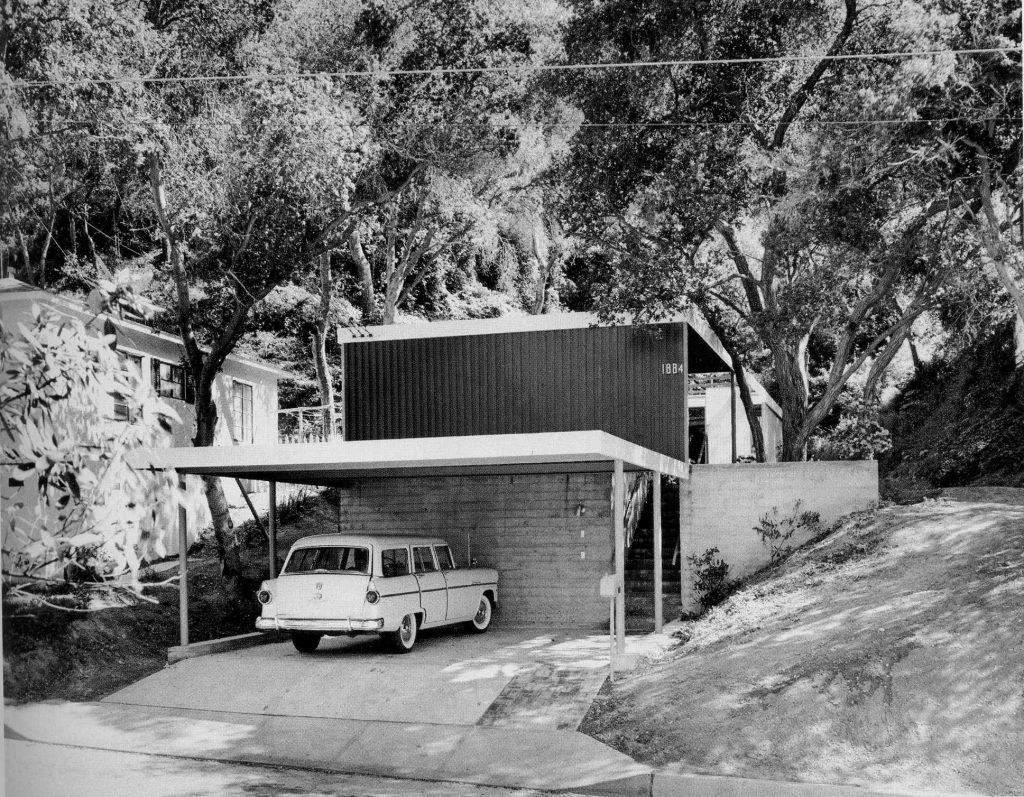 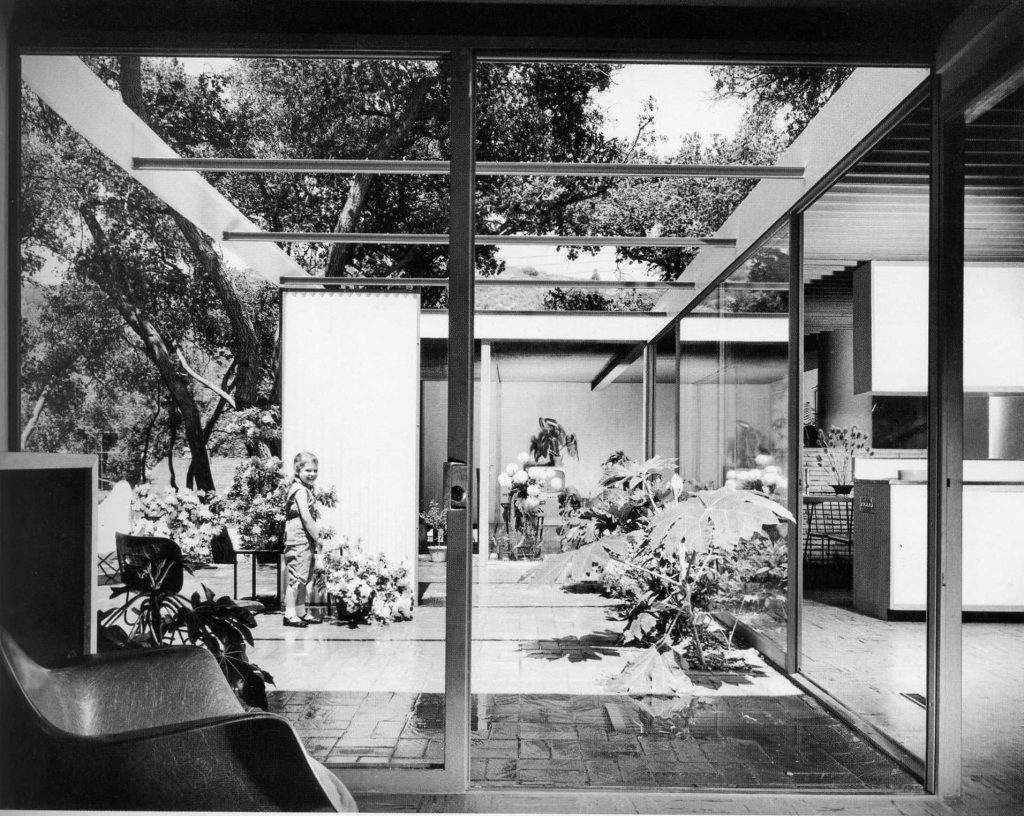