This house belongs to the series of houses that the architect made in Paris in the mid-1920s, culminating in 1930 with the famous Ville Savoye.

In this series, Le Corbusier designed homes on behalf of individual clients, instrumental principles and conceptual parallels to develop with the successive prototypes like the Maison Citröhan. This work, however, is a somewhat unorthodox alternative for those principles.

This project marks the beginning of Le Corbusier’s interest in the investigations of his contemporaries in Europe. Despite the fact that from this moment, he will be hostile to numerous investigations in Germany, defending the Bauhaus in Weimar at the time it is closed. However, there is little sensitivity to the nuances within the movement of Russian art, despite his correspondence with Ilya Ehrenburg and El Lissitzky.

This double house designed in 1923 for Raoul La Roche and Albert Jeanneret, marks a milestone in the architectural reflection of Le Corbusier, who was very attentive to the approaches of the European avant-garde.

The “five points” for composing the facade and “fenetres en longeur” (long windows) are by all menas present, as well as the two-story spaces and balconies characteristic of the architect. But unlike the other houses at the time, all is not recognized as generated from a basic regular volume. On the contrary, it is an articulated composition that emerges from a volume to add another long rectangular volume located at 90° to the first and characterized by a large curved front.

With the new forms of formal work explored in this house, Le Corbusier left the constructive rationalism of Auguste Perret, still present in the Domino House, unprejudiced, and addresses the deployment of land devoid of structural features.

The apparent irregularity of the house was justified by the fact that “every body rises to be near its neighbor, according to an organic reason, the campaign to ease the internal and define the outside, it takes all kinds of projections.” The deductive method of composition, where the plane is a “generator” that defines all volumes of the house, plays on the French approach of the rationalists of the late nineteenth century. However, the presence of a formal principle that creates relationships between the different elements of the building and moderates this irregularity.

While designing new spaces and joining the interior, the proportions of the volumes and the external openings are defined by a regulatory line “based on the Aureus number that prescribes measures and locations of each item”.

The maison, built in the 8-10 Square du Docteur Blanche, at Auteuil, a middle-class neighborhood on the outskirts of Paris, which even then had an atmosphere that made people like many other smaller projects on which Le Corbusier worked, was not a mere real estate speculation.

As a result of the enthusiasm demonstrated by seeing models of Theo van Doesburg and Cornelis van Eesteren, architects of the De Stijl Group, Le Corbusier reviewed the principles on which these had been based to design the rooms of Maison La Roche-Jeanneret. In view of their conflicting compostitional styles, Le Corbusier replaced the small windows in the walls of large glass surfaces, which constituted one of the features of such construction.

Subsequent to the modification of the project, the house becomes an assembly of large flat slabs of stone or glass, where conventional openings now coincide with the edges. Its architecture suggests a break with all previous languages that set the stereotype of a house.

The series of interior spaces of the house, leading to the ramp at the gallery of paintings, is ordered as an “architectural promenade.” Le Corbusier performed here for the first time a concept inspired by the study of the Acropolis in Athens: a theater for processions, as proposed by Auguste Choisy in “Histoire de l’Architecture” in the late nineteenth century.

A journey along which the views are offered in 3 alternative ways: upwards, horizontally, and downwards.

When you climb the stairs from the entrance, you discover the extent of the lobby as it appears in relation with the dining room. At the height of the treetops, the house was located there respecting the existing trees, the walk leads to the picture gallery, whose curved wall supports a ramp that leads to the “terrace garden”. The gallery offers a light to purist and cubist paintings acquired by Le Corbusier and Ozenfant on behalf of Raoul La Roche. 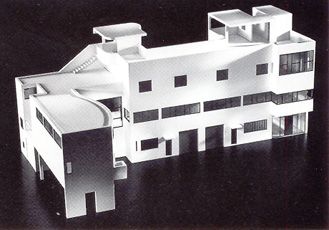 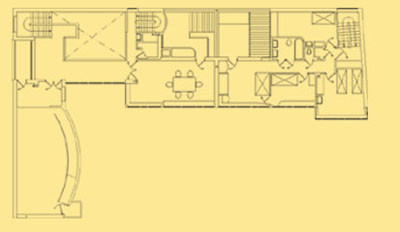 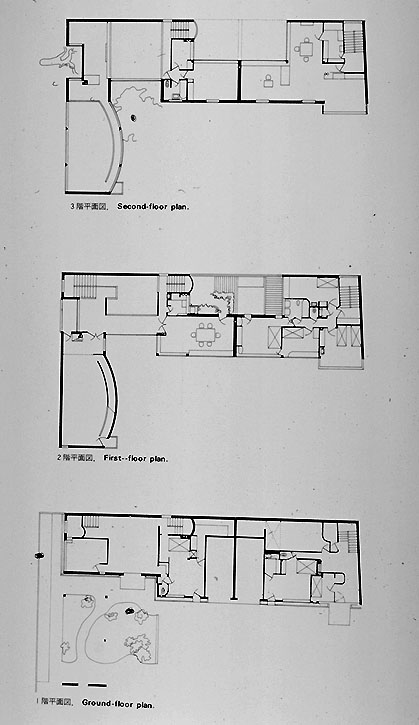 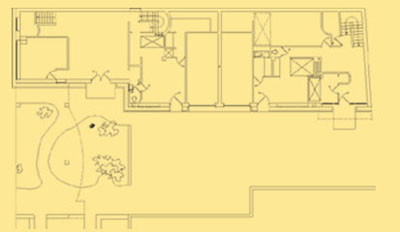 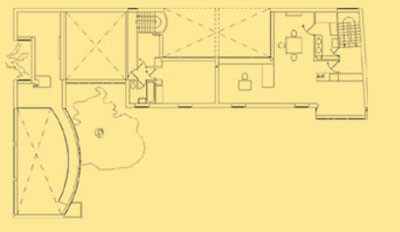 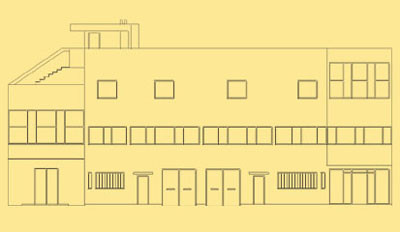 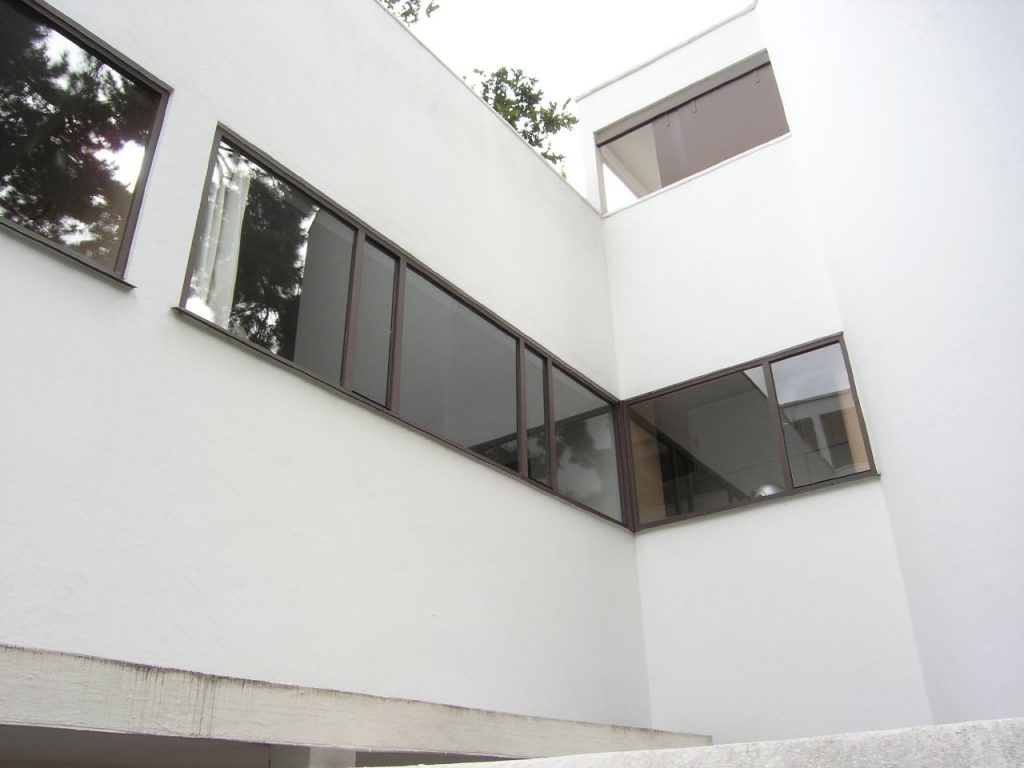 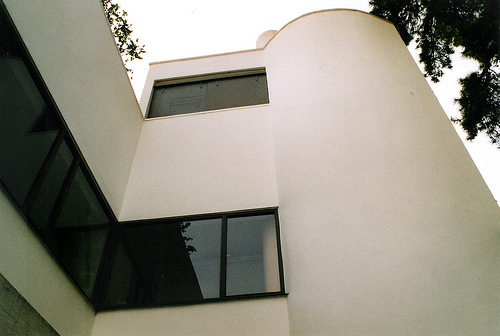 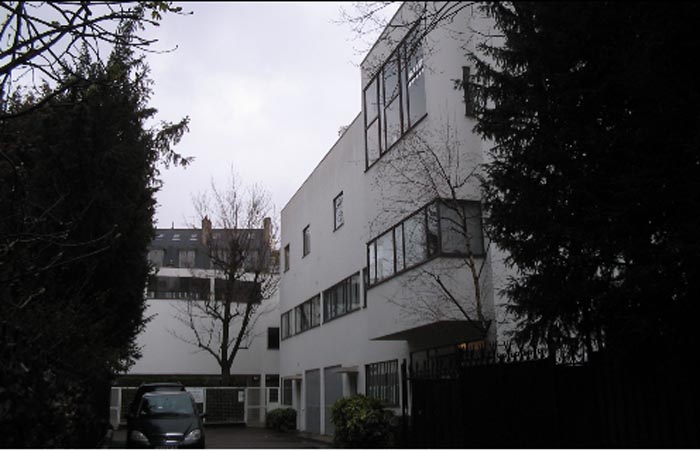 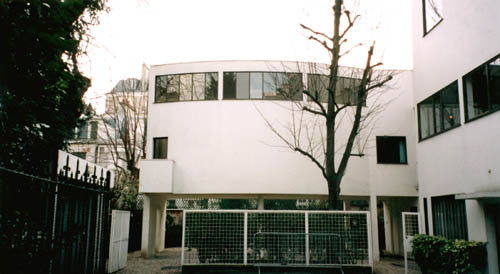 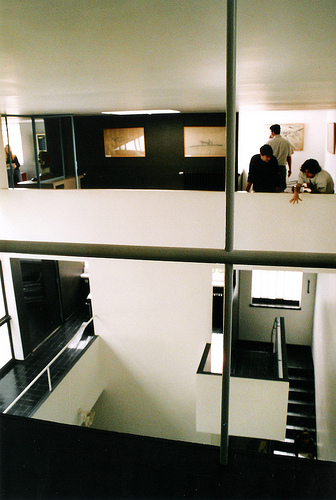 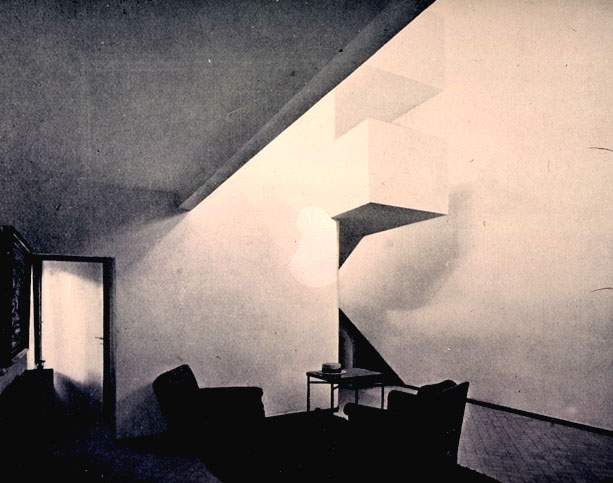 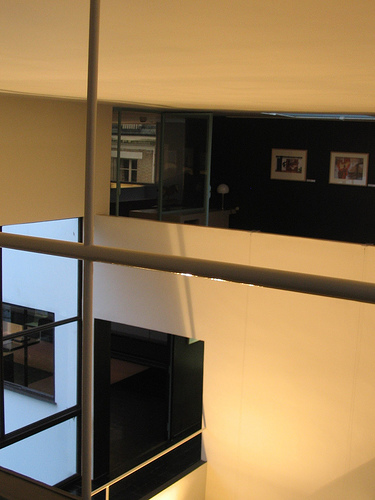 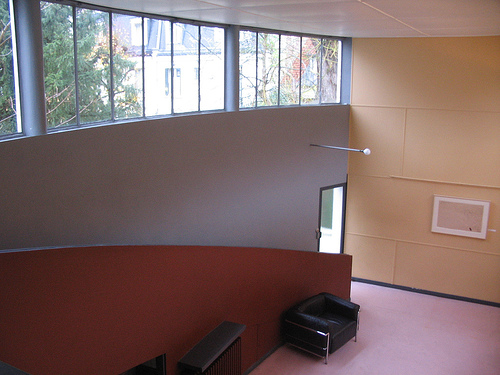 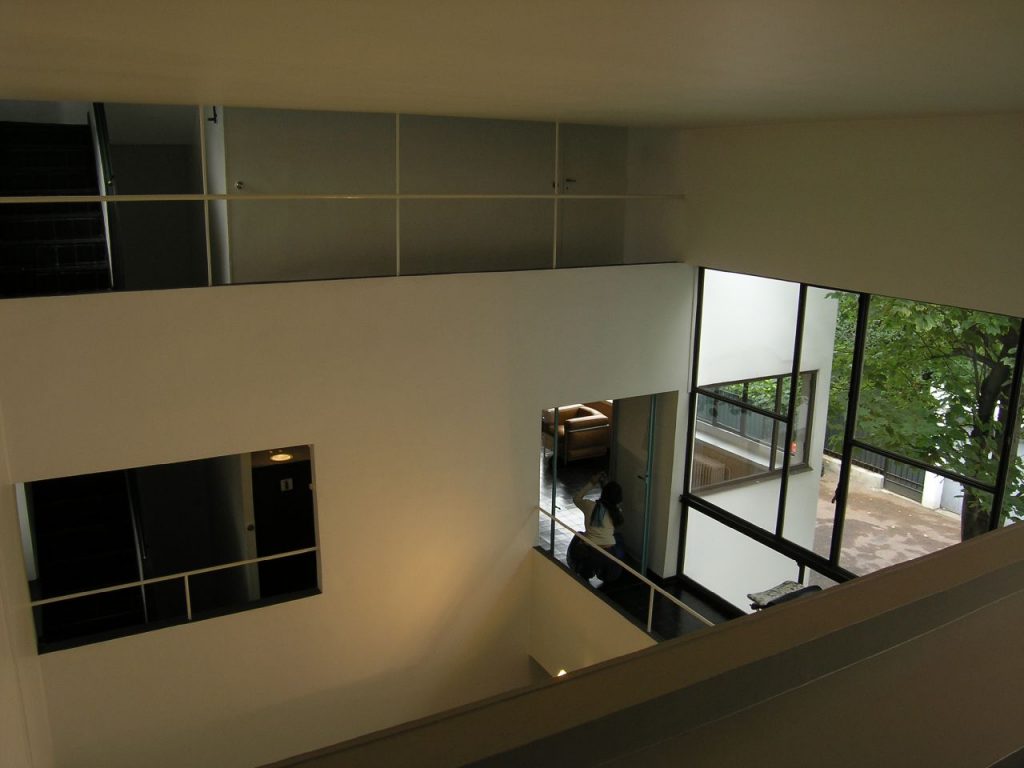 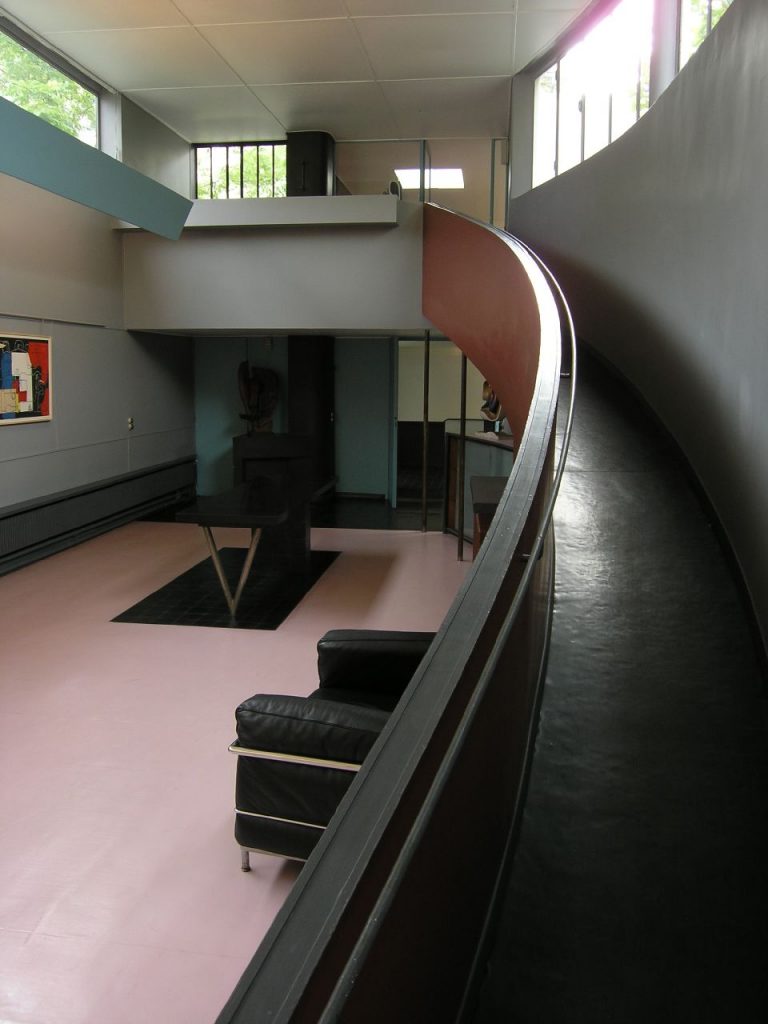 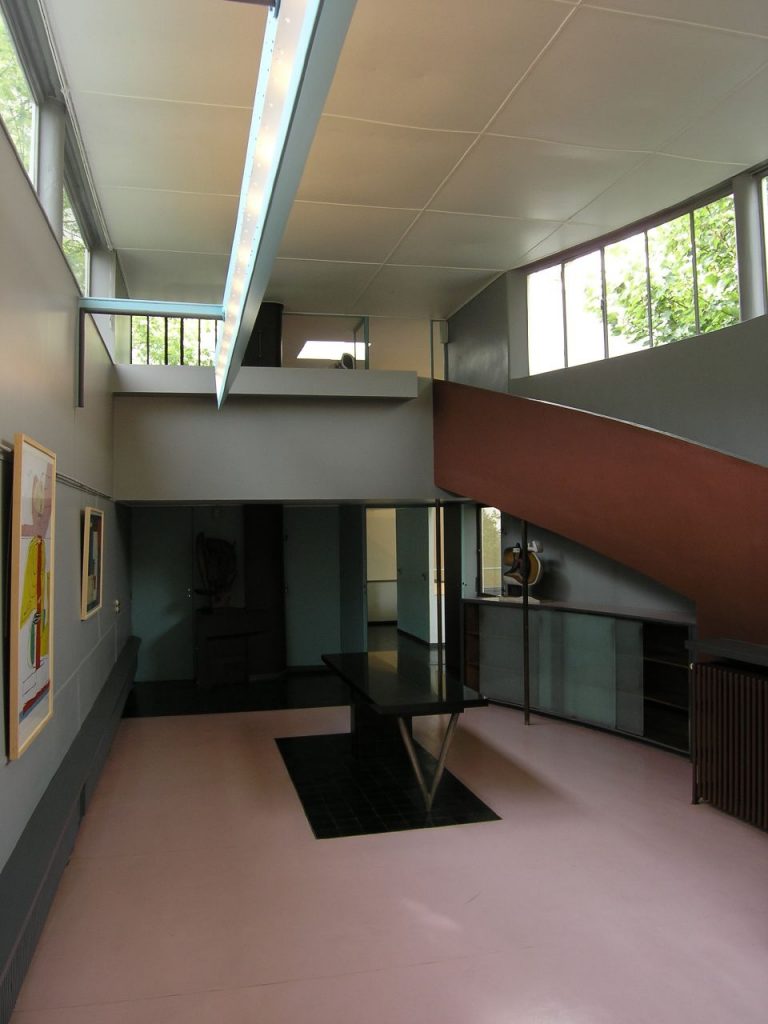