Designed by architect Antonio Bonet, in close collaboration with the owner Ricardo Gomis and his wife Agnes Bertrand Mata, the house Gomis, better known as La Ricarda is perhaps its most emblematic and architecturally work the best example of Rationalism Catalan. Its construction is a continuation of the work done by the architect in Punta Ballena, Uruguay, with the House Berlingieri, where the consistent use of the structure formed by pillars and Catalan vault creates spaces of great depth and transparency.

The construction of La Ricarda, was made “correspondence” since Bonet in those years was in Argentina and directed the work from a distance. The first customer contact was in 1949, the first time Bonet returned to their country since 1936, after which a first project did not go ahead was made. The second proposal, developed from 1953 was finally accepted and constructed. The construction work was directed by Comas R.Bofill architect and builder.

After the worst years of the war, artists and Catalan intellectuals, including John Cage, Merce Cunningham, Josep Mestres Quadreny, Carles Santos, Joan Prats, Robert Gerhard, Villèlia, Antoni Tàpies, Joan Miró and Joan Brossa, launched the CLUB49 project with the intention of recovering the artistic vanguard born during the Republic and aborted by the subsequent civil war.
In the absence of public and media space, Ricardo Gomis turned his house into a place of artistic experimentation of all kinds, making your house, La Ricarda, a haven of Catalan art during the last 15 years of Franco.

La Ricarda Gomis still belongs to the family, who in 1997 commissioned the architects Fernando Alvarez and Jordi Roig Prozorovch to restore, this careful work is focused on the cover and carpentry.

The aim of the project was to restore the operation of thermal and waterproof insulation, and repair of corrosion resulting from condensation on the armor of structural, less visible but more worrying vault from the point of view of stability and survival of the dome, therefore, the entire house. This entailed a process of dismantling and reconstruction of the (non-structural) within a premise based on maintaining the appearance defined by the original construction features outdoor vault.

The property is located in an area of several acres, close to Barcelona, compared to the pond La Ricarda and the Mediterranean Sea, surrounded by a pine forest, on the Way of Albufera s / n El Prat de Llobregat, Catalunya, Spain.

This house sits on land that had been owned by the House of Barcelona Maternity subsequently acquired (1895) by Manuel Bertrand and Sauces, textile industrialist and great promoter of the whole area of ​​lowland Prat, building roads and drains. In late 1957, the municipality of El Prat de Llobregat granted planning permission and work of this construction begin on a piece of the La Ricarda next to the sea.

This large house consists of different pavilions, which bind asymmetrically on one floor. Its layout is horizontal, with interior spaces: living room and bedrooms, intermediate: terraces and porches and exterior spaces surrounding these modules, pool, locker rooms and a lattice wall.

A tower emerges among the pines, with a studio and a water tank, put the vertical counterpoint to the set.

The concept of beauty in this construction comes from two sources:

The house is built on one floor, with a refined distribution program and needs to amply cover the resignation of the plant to the sea views. In the courtyard access your built a pond and placed a sculpture that welcome, together with the broad next outdoor spaces surrounded by Mediterranean pine groves.

A 130 meters from the sandy beach leveled the ground with a concrete platform on which the house stood, with a maximum height of 3.75 meters above the platform.

The porch module is the basic unit of construction, the forward who is the key in the articulation of the different modules that make up the house, allowing the concatenation of the side vaults and renewal of water cover, limiting its width, 1.30m, circulation areas and passage between rooms, home support services as the guest toilet, dressing room or the living room fireplace and entrance to the stairs leading to the basement. Its depth is the reference for positioning the walls on the east and west facades, either on the outer edge thereof, internally or in the middle.

The orthogonal modulation extends in two directions defining the space distribution. Are added longitudinally modules strung with a vault below and in the lateral direction, this binding is possible by the eave

The core of the housing is formed by the common areas, entrance hall, lounge, dining room and kitchen located in the central area consists of four modules concatenated by the eaves. This area is open plan and only the kitchen is closed with tiled walls. From here you enter the basement where records of housing facilities are located.

In north-south axis is the module that offers 3 bedrooms to which is accessed by a gallery decorated with colorful blinds, also designed by Bonet. Each bedroom has its own bathroom and dressing room, opening onto a patio, in the garden, surrounded by a wall that provides privacy. The bedrooms are divided by a sliding corkboard. Were originally the bedrooms of children.

Another core, apparently from the rest of the building, corresponds to the master bedroom, with bathroom and a small study.
Initially proposed project architect maintain separate master bedroom from the rest of the house, but was finally attached to it by a fully glazed step. For this reason it is located to the west, away from the house.
A third module, at the opposite end, it was for room service and garage.

On the leveling platform in the field on a rectangular grid system that orders a deck base concrete revoltones created. The facades are never support elements but become large compositional walls and fine ceramics, large glass closures, or “brise-soleil” to the west.

The vertical frame is formed by a web of metal pillars of very small section, defining a basic space and structural module, of 8.80 x 1.30 x 8.80 m and 8.80m in the east-west axis and 8.80 8.80 x axis in north -south. On these pillars, formed by two UPN 0.13 drawer, crowned by a reinforced concrete beam U-section, rests a cover formed by a series of reinforced concrete beams that guide the house in one direction, creating Catalan vaults 7.5m cord, with a maximum height of 3.10 meters, topped by two lateral planes eaves, -1.30, which collect the horizontal thrust, as used by Le Corbusier. The section of concrete girders includes the gutter to drain covers. The program structure is superimposed with high precision.

Light pillars are covered by a cankerworm two sheets: the interior, structural concrete, and the outside like a hearth Catalan, separated by a ventilated air and ceiling supported by tabiquillos death.

Modules aggregation occurs in the longitudinal direction with a dome extending below and in the lateral direction with the mediation of the eaves. This basic unit is exposed on the module front-porch to the living room. Four modules are concatenated by the forward central common areas of the house, lounge, dining room and kitchen.

The materials used in its construction are mainly steel girders, reinforced concrete, glazed stoneware and glass.

The vertical walls of the façades blend with the outside because the walls of semitransparent or opaque glass which is used vitrified tiles reflect the surrounding landscape. The walls are plastered courtyards into and covered with vitrified stoneware exterior color to amber. The vaults were covered with pieces of salted stoneware 12 x 12. 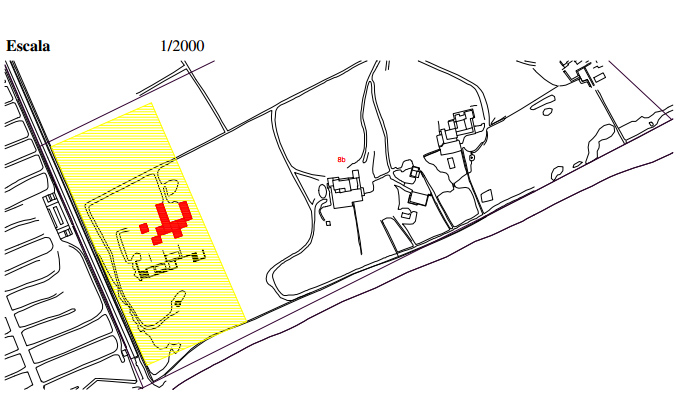 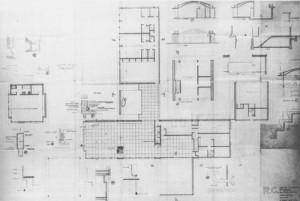 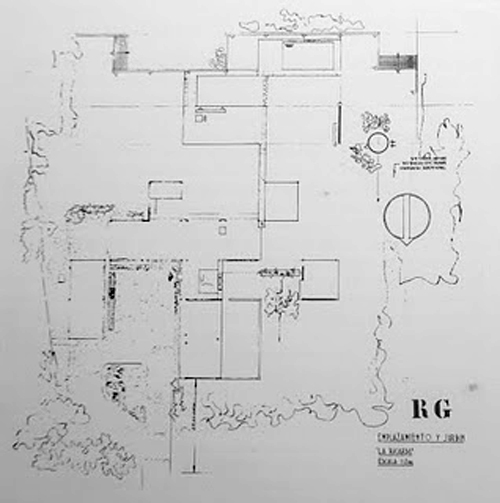 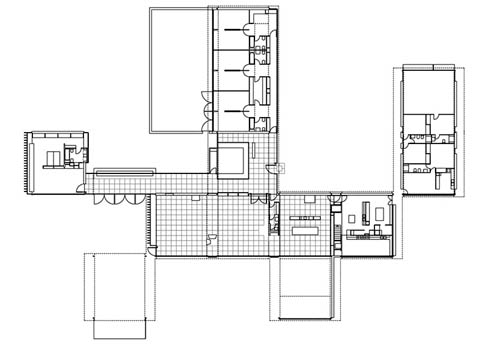 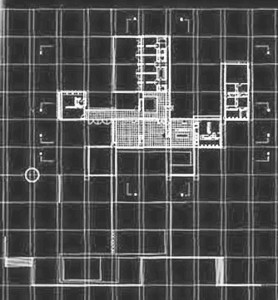 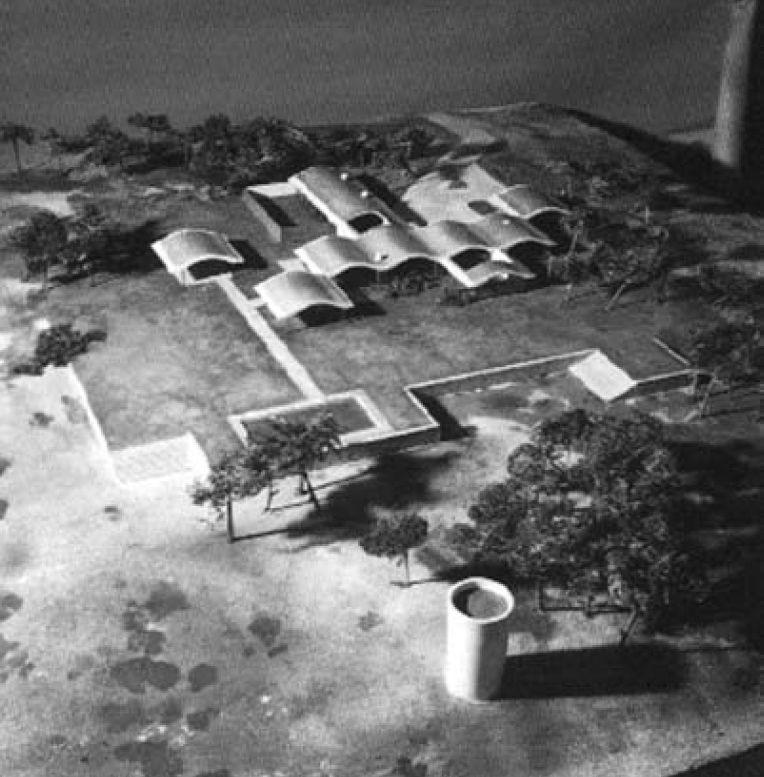 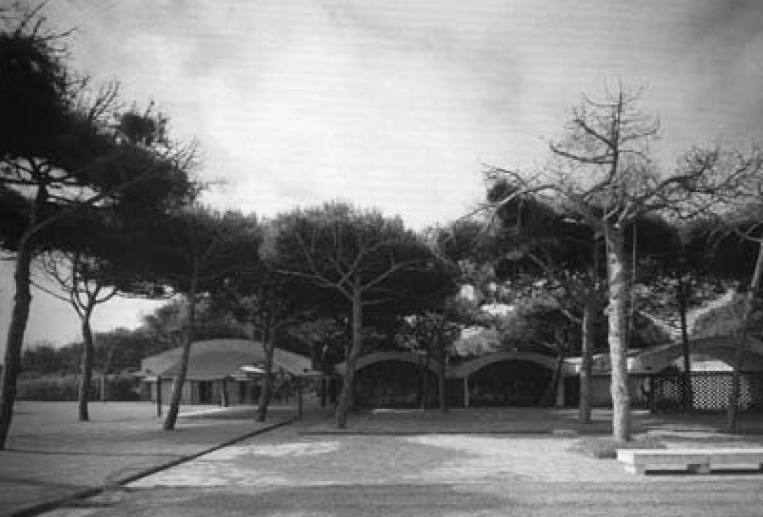 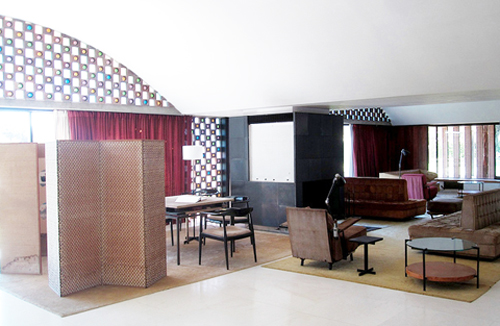 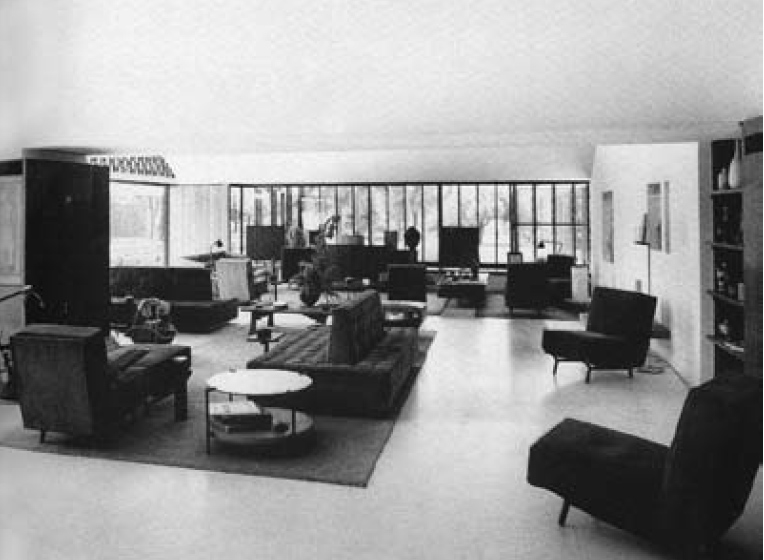 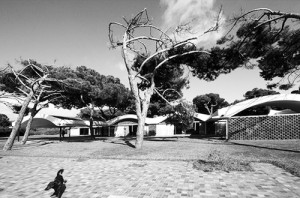 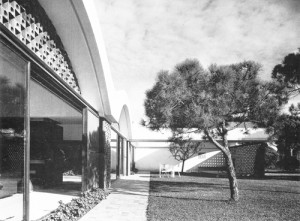 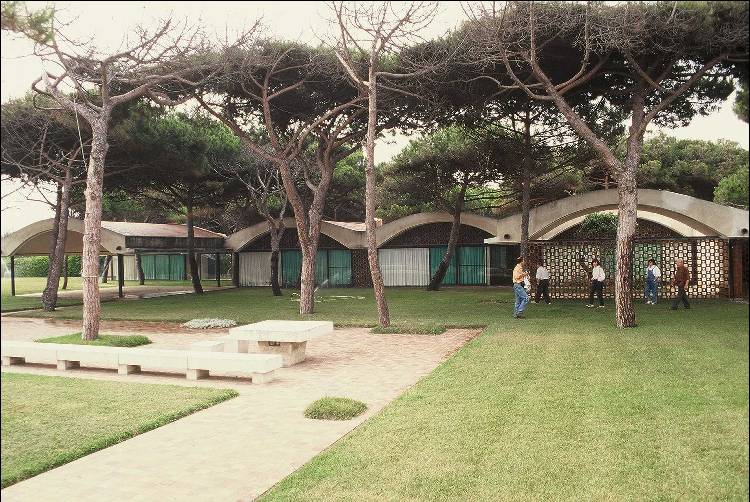 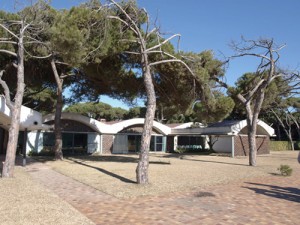 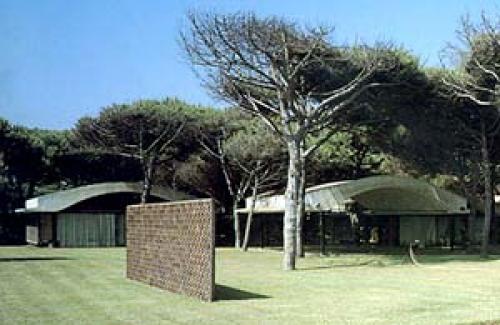 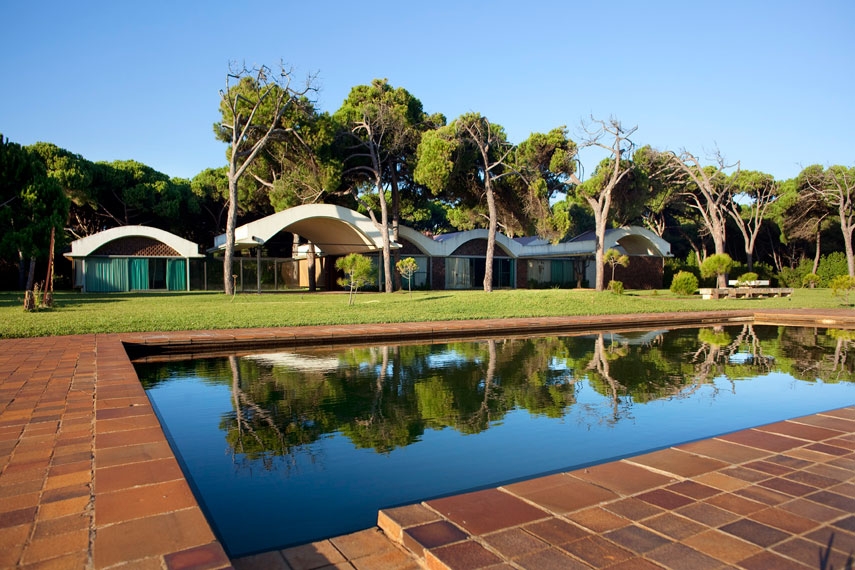 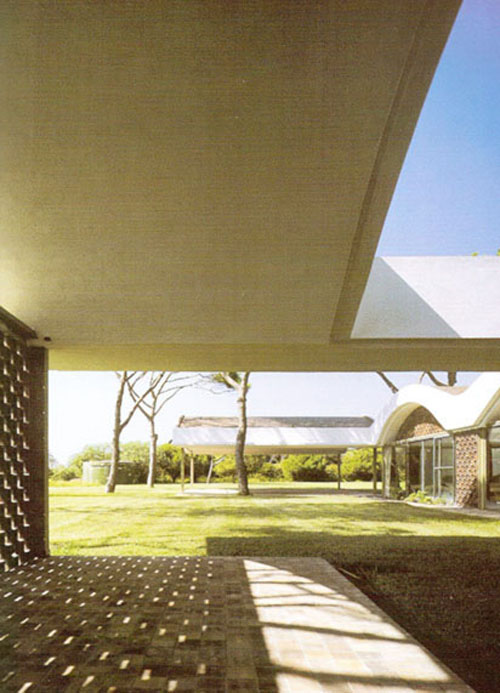 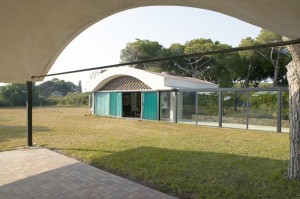 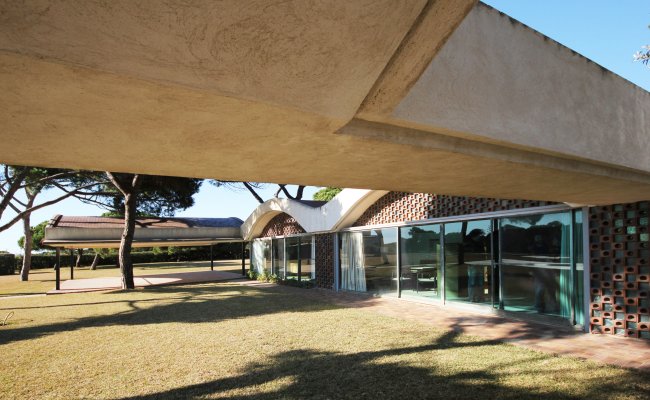 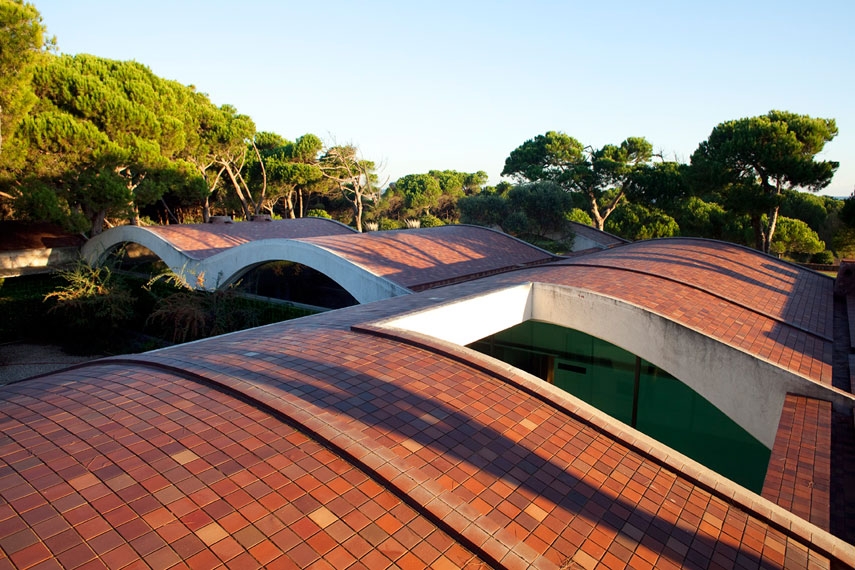 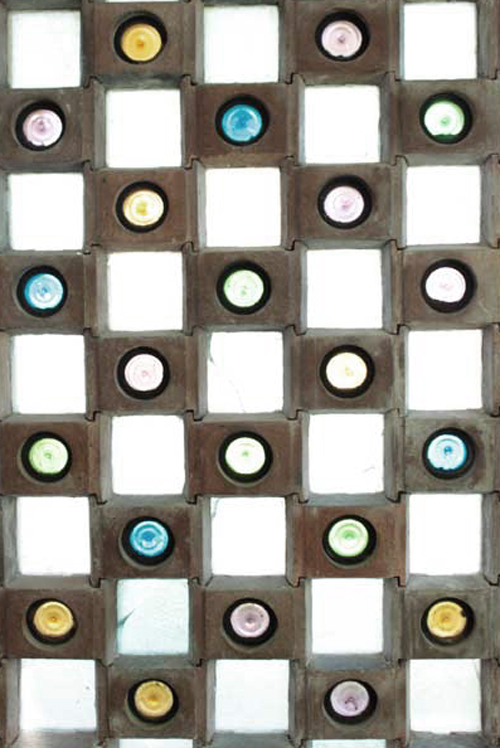 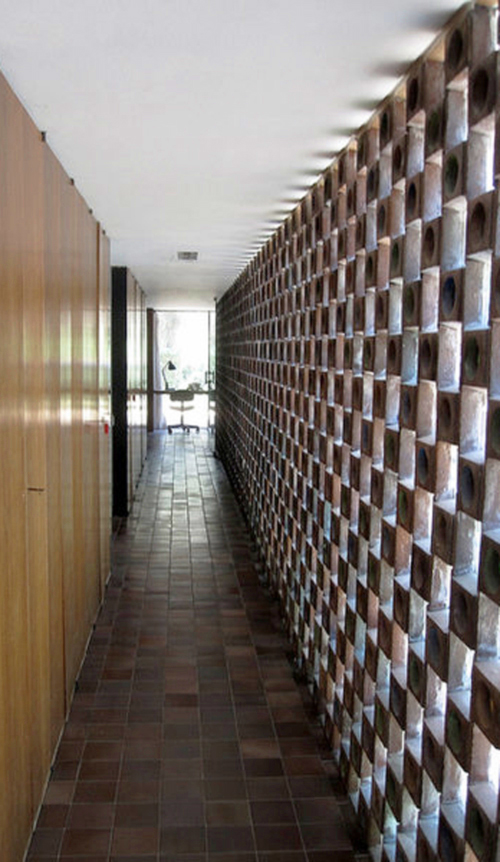 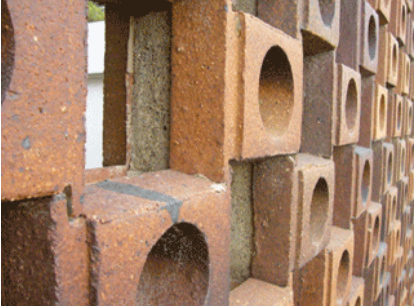