The works of the new Masia of FC Barcelona began in December 2009 and were completed in July 2011. The original center, “La Masia” was created in 1979, and this new site has been added to the name of Centre Formació Oriol Tort, (Oriol Tort Training Centre) in honor of one of the fathers of the idea of ​​creating its own quarry, three decades before the inauguration.

The company MCM Renting, took over the surface of the facade, with a cost of 9 million euros. The new building, for which a structure made ​​previously took advantage, designed by architect Josep Llobet Bach and PB2 Projecte Study Team has a floor area of 5883.20 m2 distributed over five floors, with capacity for 123, 83 for residents and 40 for concentrations of professional teams.

In this study Barca residence residents and play, dreaming of reaching the goal of many other football stars formed in the old farmhouse, like Piqué, Puyol, Busquets, Xavi, Iniesta, Pedrito, Messi and Thiago.

In 2011 the transfer of the training center of FC Barcelona to a new facility located in a huge sports complex, Ciudad Deportiva Joan Gamper belonging to the club, located in San Juan Despi, 4.5 miles from Camp Nou was announced, Barcelona, Catalunya, Spain. The new space was called La Masia-Oriol Tort Training Centre.

The sports city with easy access to Camp Nou through the main roads linking Sant Joan Despi to Barcelona.

With an area of ​​136,839 m2 Deportiva Joan Gamper City hosts training and competitions base teams Catalans club football as well as the activity of much of the training sport sections. With the coming into operation of this full installation, much of the sport equipment base is concentrated, previously developed around the Camp Nou in the accompanying fields Miniestadi and the Palau Blaugrana 2, popularly known as the ‘Stables’.

Its facilities, until 2011, consist of 9 golf 5 with natural grass and artificial turf 4 1 sports hall 1 grandstand building in the field 1, 1 service building, 1 building for locker rooms, different areas of training specifically for goalkeepers and technical and New Masia, opened the same year. In addition to soccer practice, are also performed on artificial turf practice rugby and hockey of Barcelona.

Sports City is organized into two main platforms at different heights, which differentiate a training camp designed to professional football and soccer fields for the base and the other sections.

The functionality and rationality are two basic concepts to define the new Masia. With minimalist decor, new construction is characterized by comfort for its residents and for being a building with capacity for growth depending on the needs of the Club.
One example is the storage room for boots and suitcases players, so do not take space in the rooms, or the installation of an ice machine in order to be used to calm the beatings.

The training concept not only sports, but also education, is well defined in the new facility which has wi-fi anywhere in the building and reinforcing classrooms equipped with the most modern technologies in education, electronic whiteboards and projectors plus two study rooms on the second floor. Leisure time residents were also listed, with playgrounds

The building has a floor area of ​​nearly 6,000 square meters on five floors, three of which are used on campus and two are reserved for future use.

In the garden was installed a barbecue that can be used by players and their families visiting days. The center has its own medical services, dining room, study and entertainment. Each floor has a common area for computers.

On this floor, with entrance from training camp classrooms are concentrated study, is also the water area and warehouses. At this level of 1,305 square meters almost all goods management building blocks and are cold rooms and technical services.

An example of the concept developed in the project functionality is present on the ground floor of the new residence, 1216.55 m2, where the kitchen is integrated, the self-service dining room, offices for administration, classrooms reinforcement and space for recreation and leisure for residents, against which left a green area so that they can be accessed directly from the training camps, while it is a green lung for the new center. Thus, not only athletes conditions are improved, but also working conditions responsible for caring for residents. Chefs, administrative staff and the heads of the farmhouse will enjoy better facilities to perform their tasks, without losing the family spirit.

On this floor a television screen placed in the common area to live “team” parties also foosball, billiards and spaces for interactive games.

In the first and second floor of the new building, which are virtually identical, the 78 rooms are located, for 2 or 4 residents. Each has a fully equipped bathroom and all the amenities necessary for the proper performance of its occupants, beds, wardrobes, study tables.

Some rooms have been adapted for physical rehabilitation of the players who need and other reserved for individual use.
In these plants are also massage rooms and a lounge area.

On the “second skin” of the facade on the training grounds of the New Masia, 350,500 LEDs offer an area of ​​1460 m2 for use as a screen, a technology deployment that will allow club sponsors image link entity and values, innovation and profitability.

The entire building is covered by this “double skin” of glass on the first floor, leaving a space between facades that enables energy saving thermal level, comfort noise level and improves safety, especially for a possible evacuation. The type of facade and the fact that all rooms leading outside cause light has a major role

In one corner of the building squarely cut that goes from the floor to the last level, rectangular plates coated with shiny maroon tone, the center houses the main entrance. A carport, covered with dark glass, complete the bucket up to the first floor and ceiling serves on whose side you can read the name of the institution.

The facade looks at training camps U-shaped from the first level, its walls are covered with the same bright maroon plates used in the angle of the main entrance. A skylight in the soil lets in natural light on the ground floor. Since spring training is accessed via a wide staircase leading down to the basement of the building

The structure is reinforced concrete. The first skin of the facades is formed by a coating of large hanging pieces of 140×30 cm, a material reminiscent terracotta cooked and does not require maintenance. With his dark brown Unlike industrial buildings, while providing elements of sustainability by not allowing the actual walls directly absorb heat from the sun, with a considerable reduction in energy consumption for air conditioning.

The interior is airy, using durable materials and easy to maintain

The building is also surrounded by a second glass skin. In one of the facades of the New Masia have placed 350,500 leds that make it a vector image, an active façade that will be used for various reasons, advertising, press releases, etc. The technology will allow a diversified or sponsors unilateral projection.

Facing the playground has developed a green area where grass and different trees planted, has also installed a barbecue. 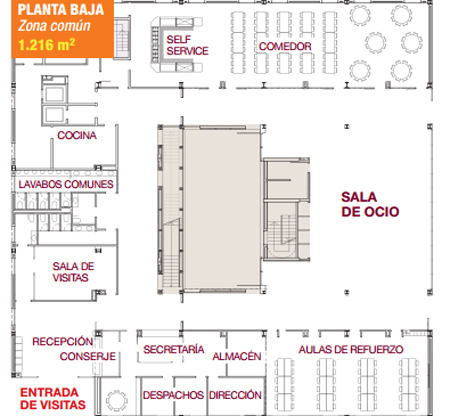 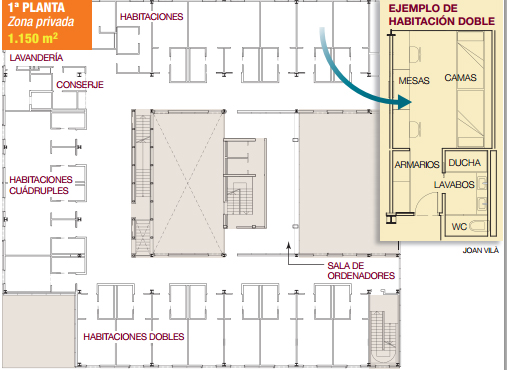 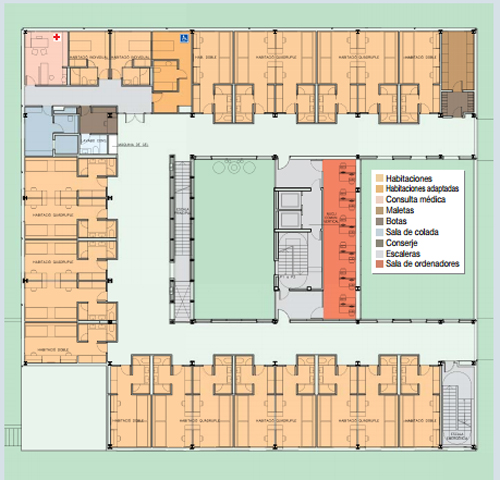 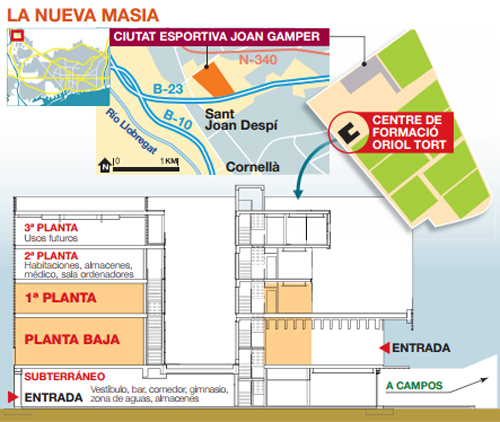 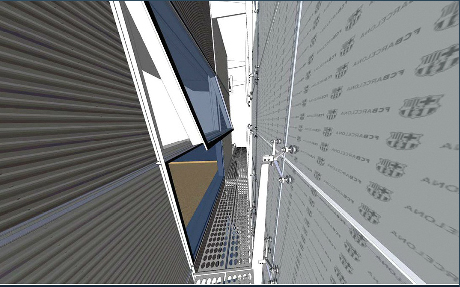 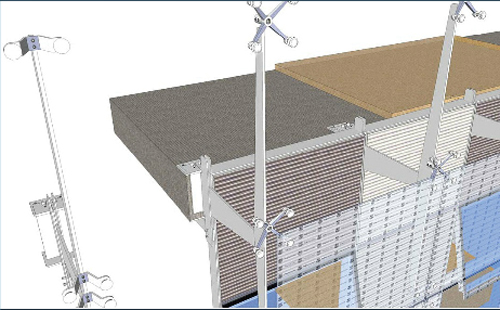 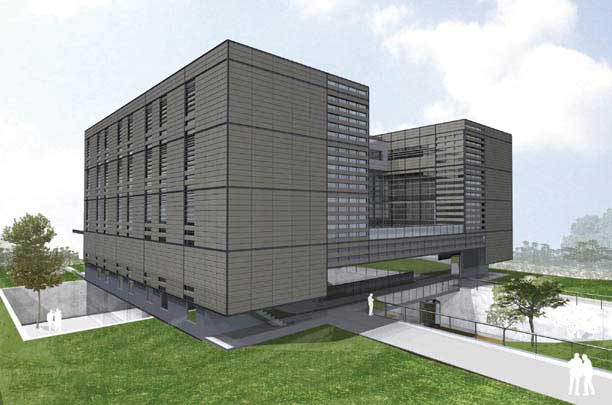 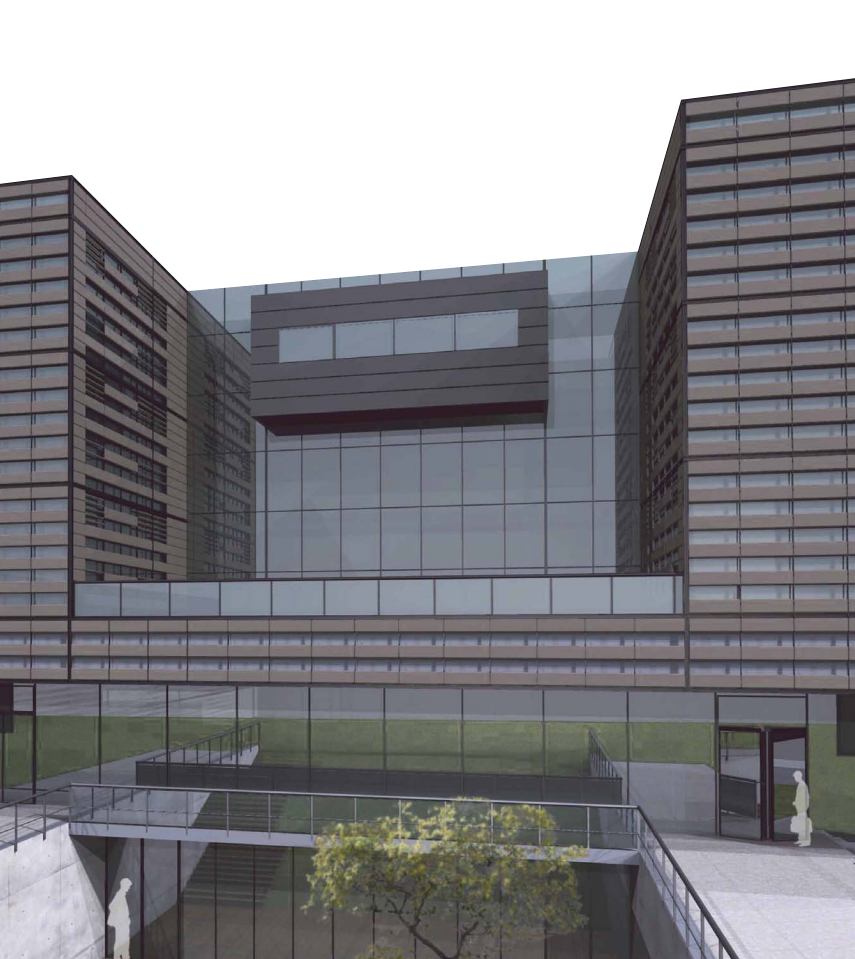 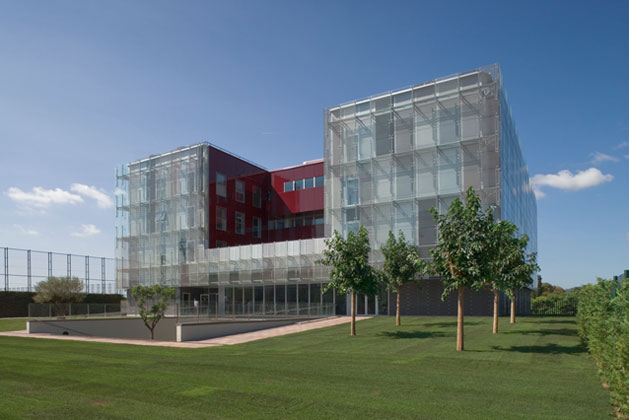 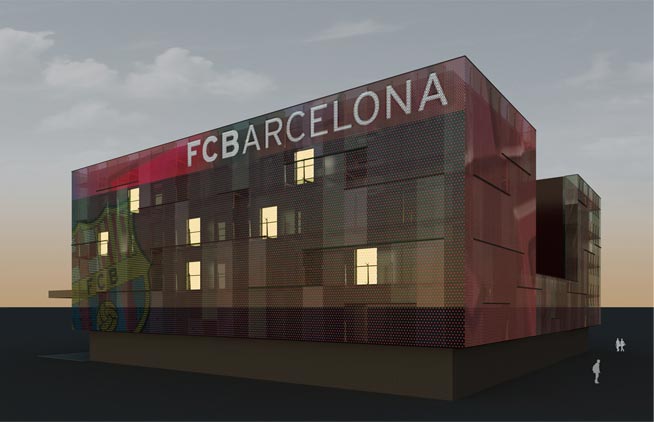 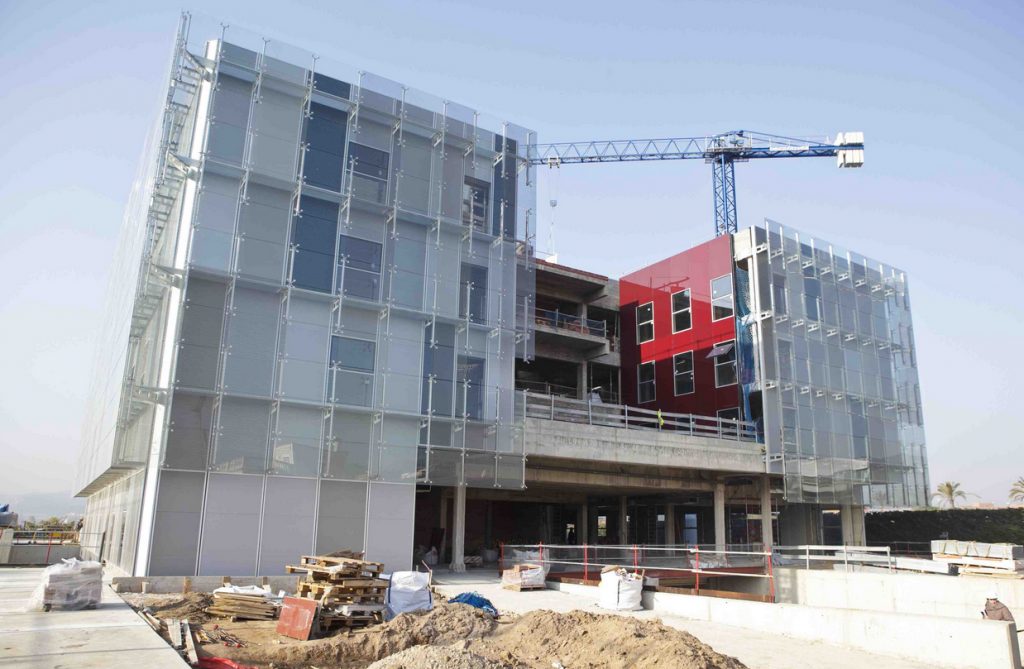 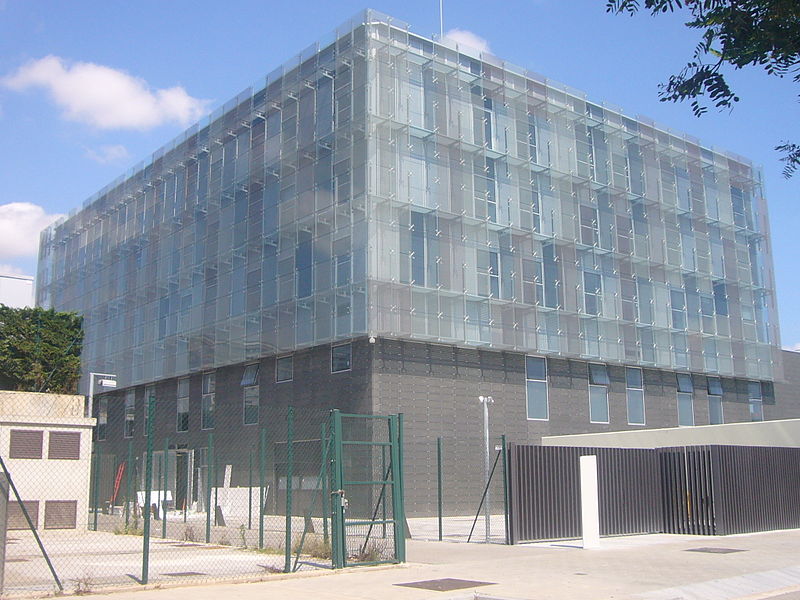 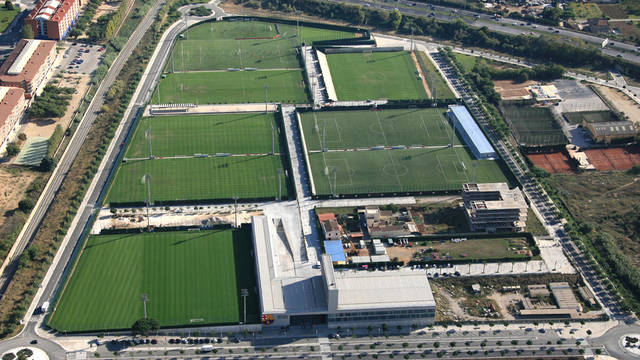 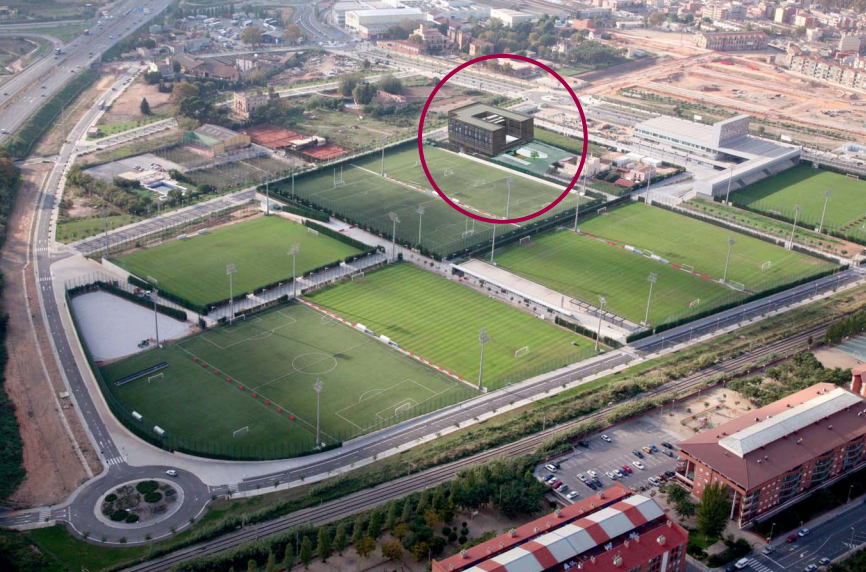 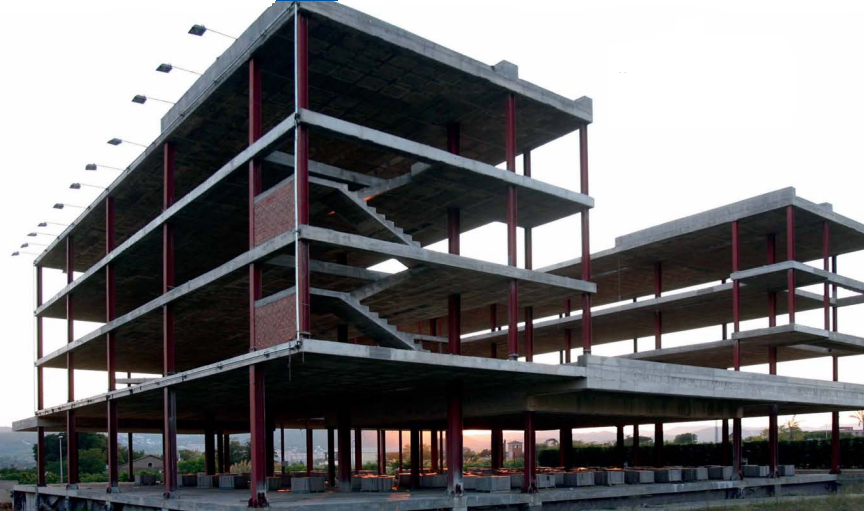 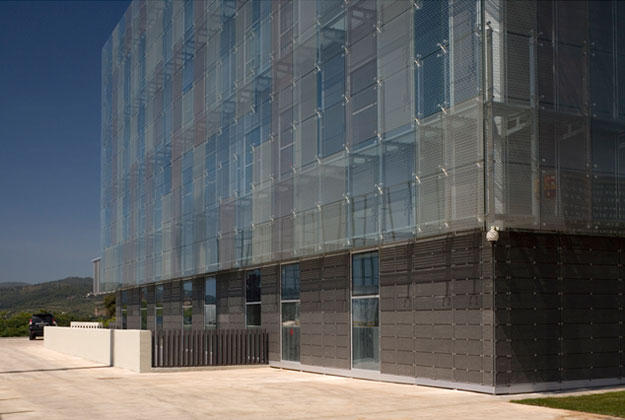 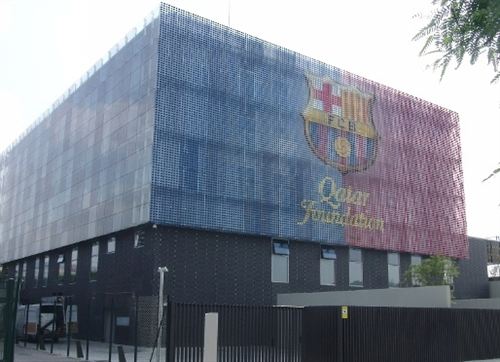 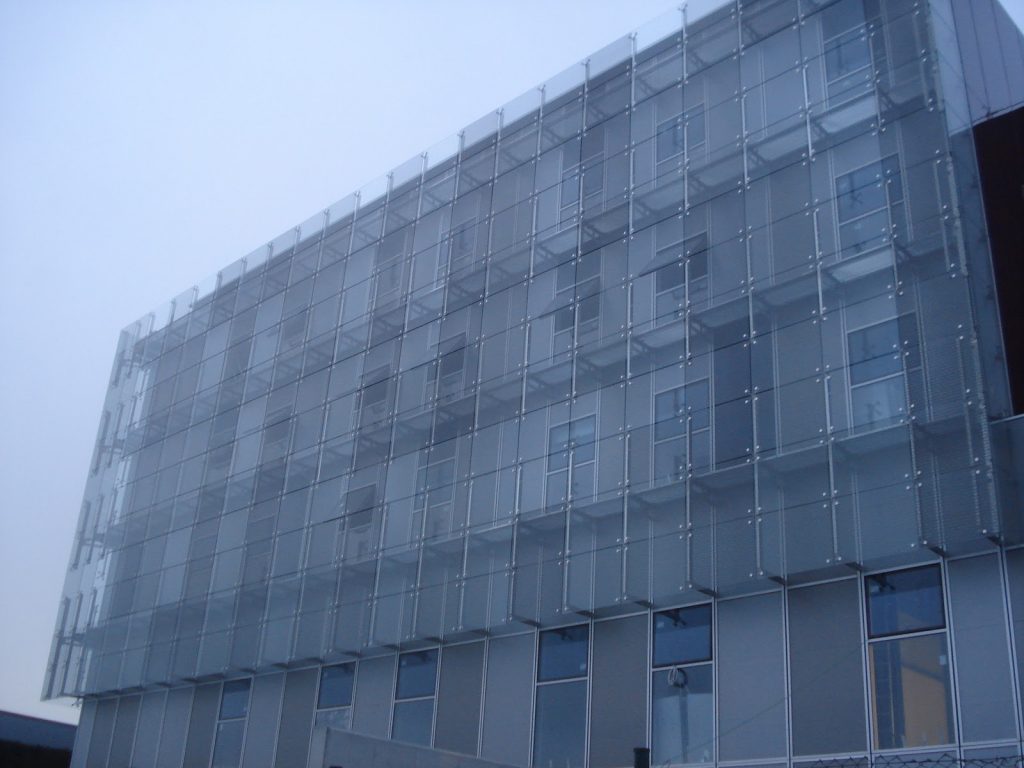 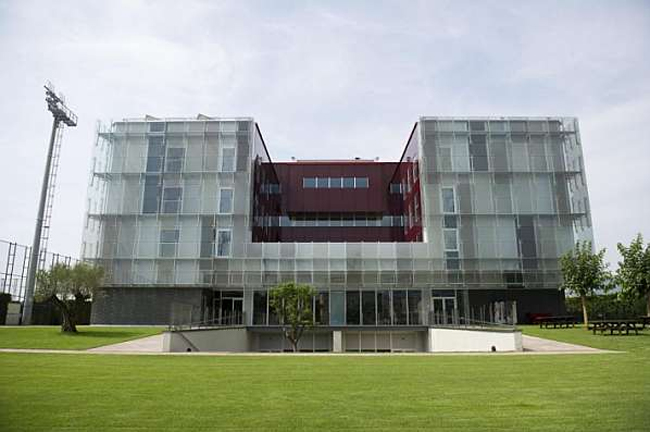 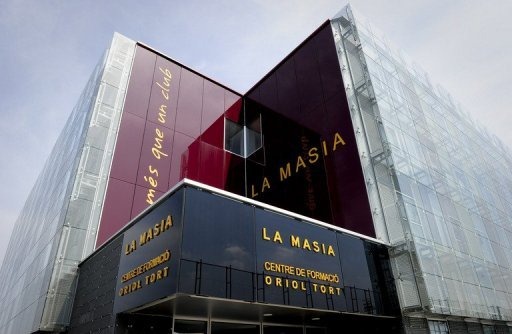 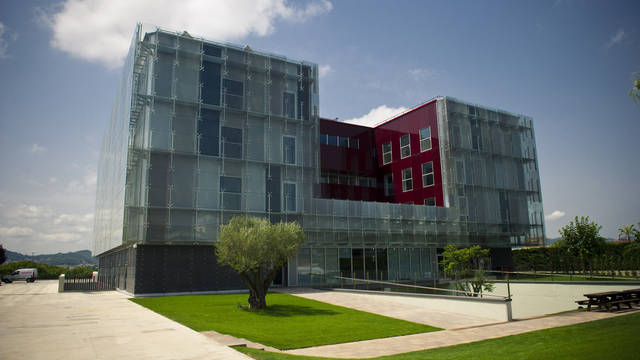 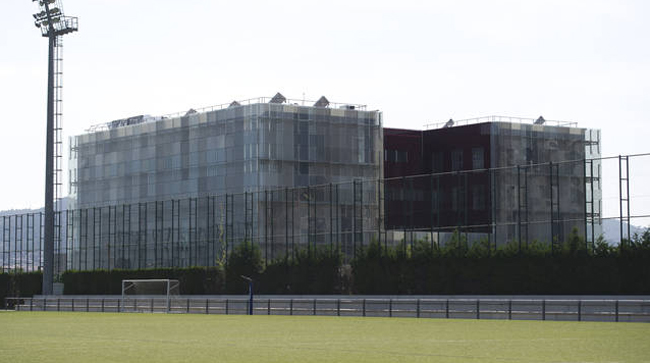 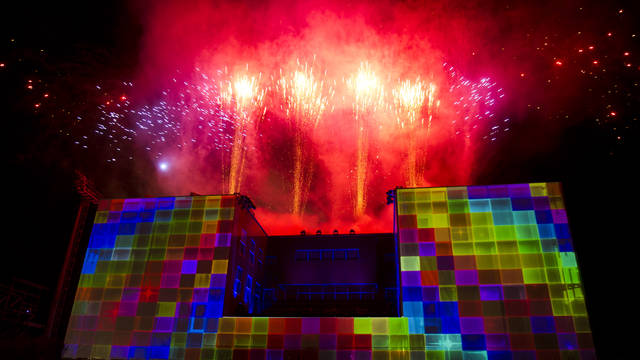 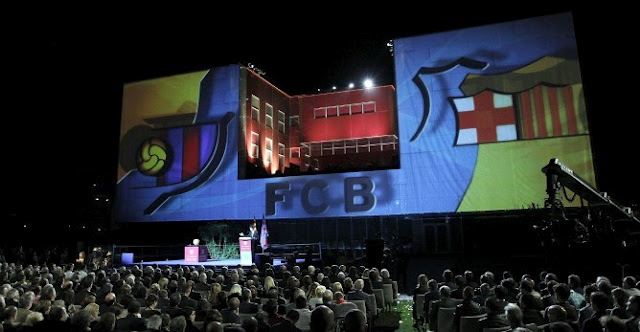 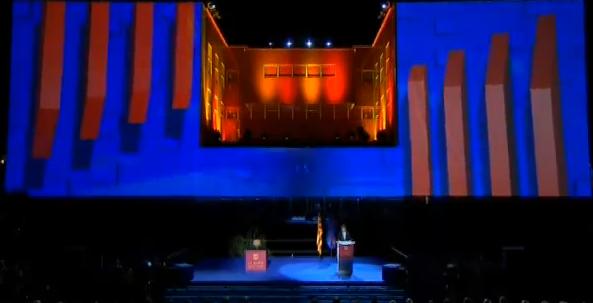