The new Performing Arts Center of Osona, Atlantis, replaces the ancient theater of the same name which closed in 2002 because of the aluminosis.

In the words of Josep Llinàs The project was structured around three objectives:

The Auditorium Theatre Atlantis is located in a complex urban environment. To the north it borders the backyards of some low houses between party located in the streets Bisbe Torras i Bages. East borders the old quarter of tanneries, faced with the medieval walls of the old town, and south by the Mèder River in the town of Vic, Osona, province of Barcelona, Catalonia, Spain.

The project L’Atlàntida is irregular, spiral, with a spectacular game decks and various internal connections that simulate the urban structure of an old town, concepts held by Josep Llinas rated Leave your vote and your team when designing commissioned by the council of Vic, a work that emphasizes the relationship of the building with its surroundings.

The cover huge faceted designed by architect begins at the level of the courtyards of the houses on the block to climb to the height of the stage over 20 meters high and form a new facade facing the river Mèder at other side of the building where the main entrance is located. This facade is porous and rear porches become a city open to new expansion front that opens to the south and west of Vic.

The facades are minimized as targeting existing buildings and are used to ventilate and illuminate those parts of the program that require it, such as the School of Music or restaurant. When these form the outer boundary are finished in black stone. When formed by a cut between the various folds of the cover, more introverted and a height greater than the above, sometimes overlapping them in a plane delayed several meters, are finished in glossy sheet brass, gold.
Much of the volume is buried required to harmonize the building with the environment that can withstand high.

The project strategy was based on the desire to provide a building to seek support in the existing environment while trying to dissolve the solar lines do not lie against any building.

On the street Torras i Bages, a house, Can Serratosa, former School of Music of the city for use by hosting the common parts of the new complex was recovered. This tardomodernista style building, designed by Manel Joaquim Raspall, consists of ground floor and two floors with the main facade open to one side of the plot, long and narrow.

This gesture has been used to give the building a public inner passage connecting the river with the city through it, vertebrando entire program and giving urban sense, connecting various open courtyards between fold and fold the cover on a tour semiexterior.

The new Atlantis space housed inside a very complex program, consisting of a theater, an auditorium, a music school and a bar and restaurant, thus making room for all the performing arts. It also has an underground parking area

The Ramón Montanyà Theatre has a capacity of 800 seats with optimal space, functional and technical conditions allowing host shows medium and large format, whether classical, musical or lyrical theater and classical and contemporary dance.
The tool is 168m2 stage area and stage area is 20 meters high, housing a modular acoustic shell.

The auditorium has a variable capacity of between 280 and 384 locations depending on the configuration, as needed, since it has retractable bleachers and hydraulic stage. The two side galleries are folded by an automated telescope system. Once collected the stands, its side close as about protecting the rostrum and overlapping on the back wall. This system of telescopic grandstand and mobility of the side walls allow versatility

Is the preferred room for music, but can also accommodate theater, banquet space or set of audiovisual productions. Their spatial versatility and conceptual simplicity makes it one of the most versatile rooms Atlantis.

The music school has 49 classrooms, 7 studios, logistics spaces, offices and reception. It also has built an inner foyer with cafeteria and outdoor prepared for the outdoors. These spaces are equipped with the most advanced technologies in lighting and audiovisual systems.

This center is primarily intended learning musical language and instrumental practice. Although they can use the theater or auditorium for their public performances, students commonly used EMVIC Joan Anglada Room with 100 seats.

In this old building administrative center spaces, faculty and many of the stores were located, in addition to access to the reception of the School of Music from the common areas that connect theater and auditorium Can Serratosa

The interior walls are coated with gold brass sheets in black stone color and looking to the exterior, covers both combined with zinc terminated.

Due to its unique geometry of the building has a sophisticated smoke control system, especially in the stage area, foyer area and patio.

The stage area is 10 calendar aerators installed dual-gate, with a level of acoustic attenuation of 33 dB Rw.
In the foyer and patio areas smoke evacuation is performed through natural vents located in skylights on the highest point of the roof of these areas. LWN two aerators 1.300×220 mm and two LWN of 1.400×4.000 mm, and 6 aerators model Colt Kamaleon-5 were placed, all constructed from extruded aluminum profile with shapes, dimensions and characteristics adapted to the architecture. The contribution of air necessary to ensure the proper functioning of smoke control system in these areas is performed through the hinterland Foyer by 6 Natural aerators lamas Colt model Coltlite LWN of 1.600×2.500 mm constructed with extruded aluminum and glass louvers.

Windows and doors for soundproofing

The side and rear walls in the different rooms Plateras been covered with diffusing elements in order to obtain an optimum sound impression space and prevent the occurrence of flutter echoes. Approximately 4,000m2 synthetic sound absorbing sheet 7 kg / m2 and only 3.5 mm thick were used

In the amphitheater absorbing elements are placed and took into account the proper inclination of the different sections of the false coffered ceiling in order to get a good sound. In order to achieve the required levels of sound insulation in every classroom has designed a floating slab, a false self-supporting insulated roof and wall linings laminar gypsum board walls. This design is called a “box in a box”.

We have searched the appropriate components in windows and doors to ensure proper isolation from the outside and hallways.
During the construction phase of the building, has made careful monitoring of work that has ensured a correct implementation of solutions on the acoustic conditioning, soundproofing, noise control and vibration of facilities and acoustic impact on neighboring buildings. 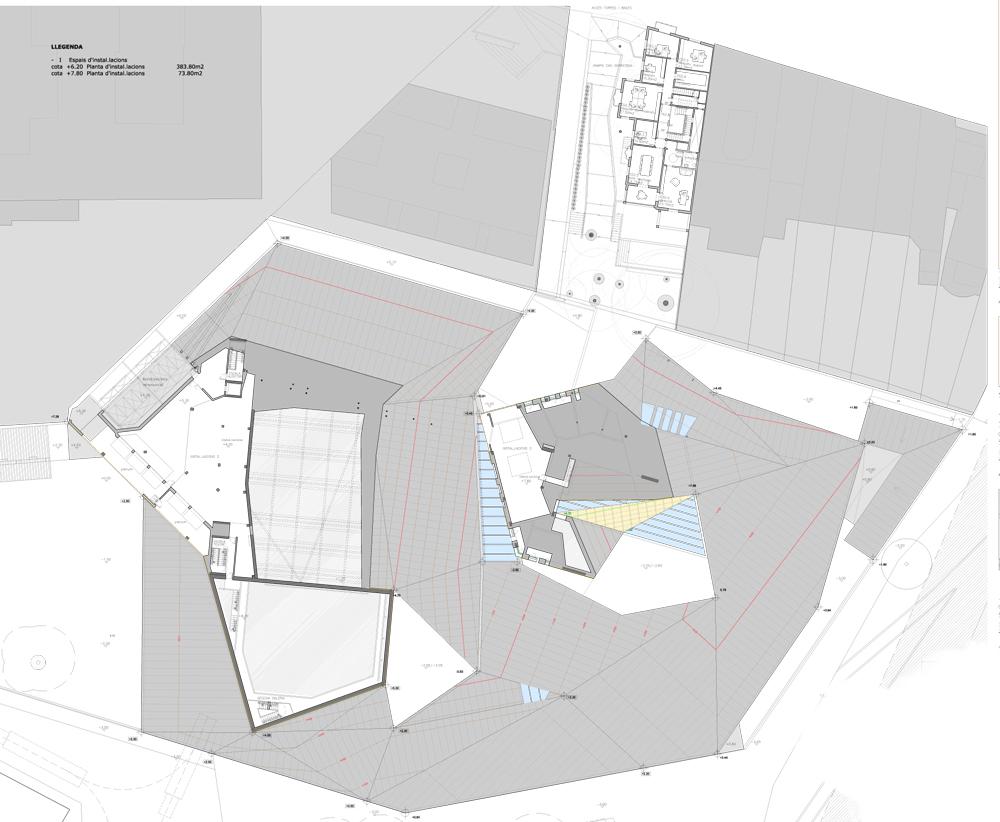 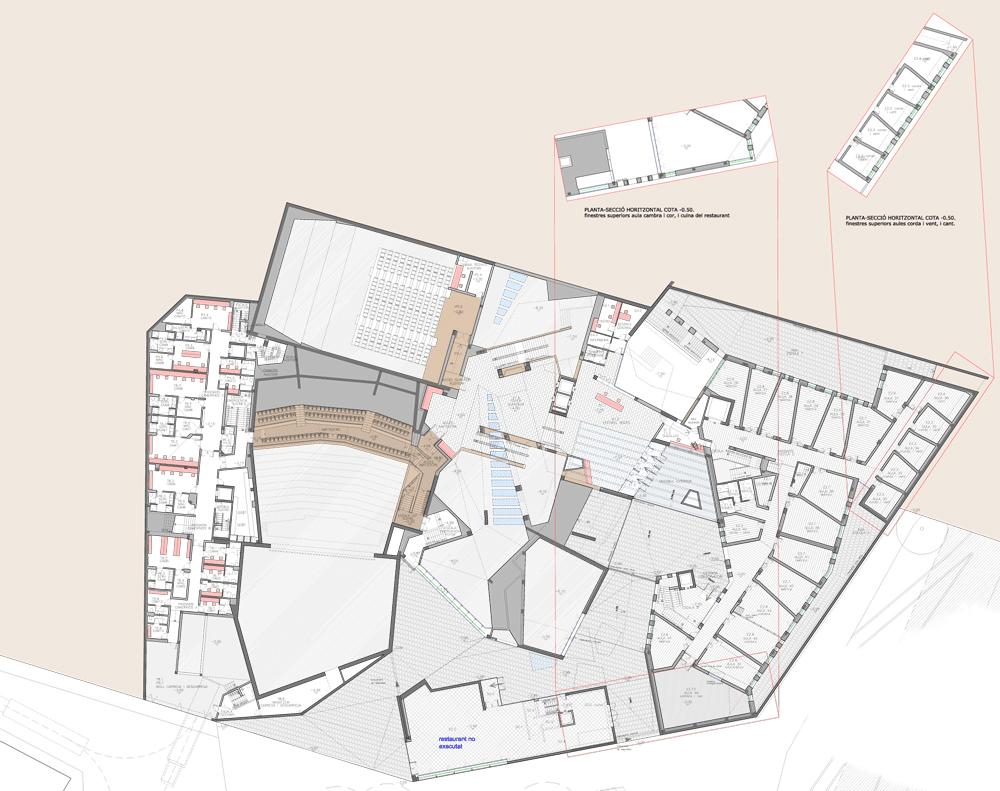 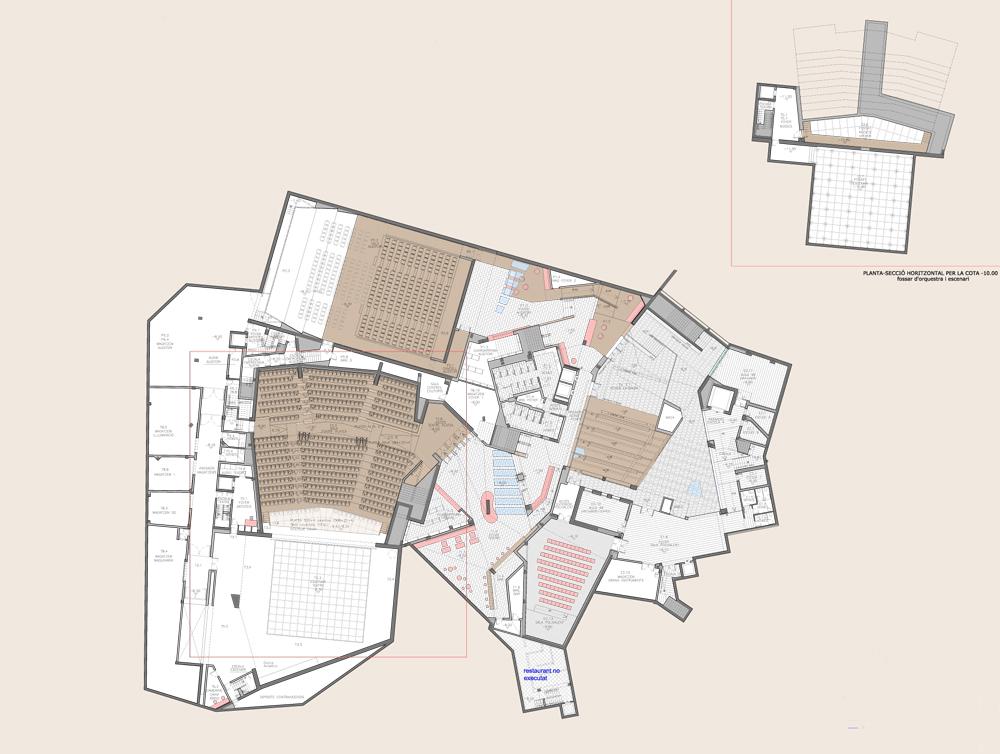 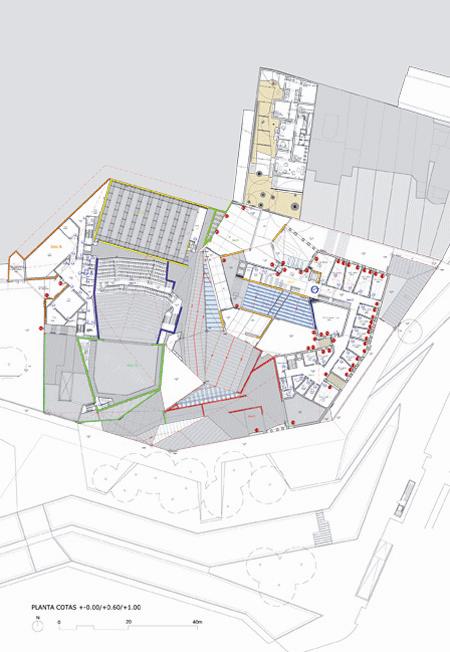 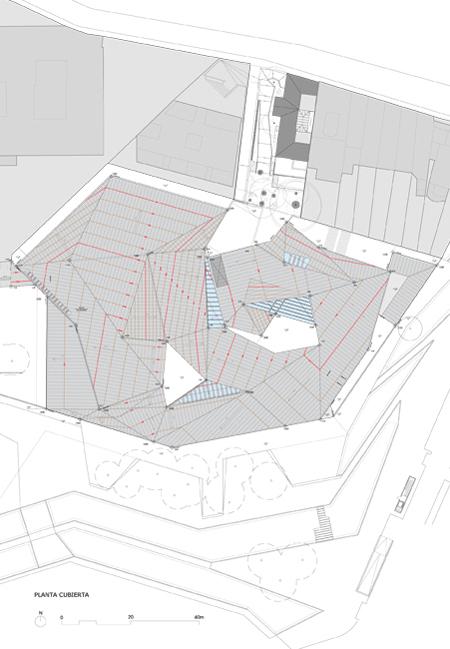 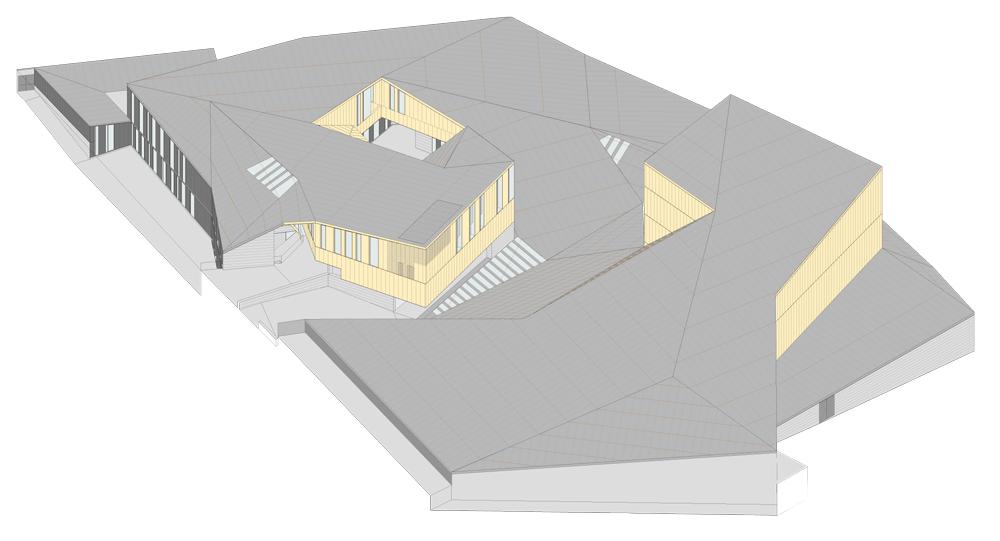 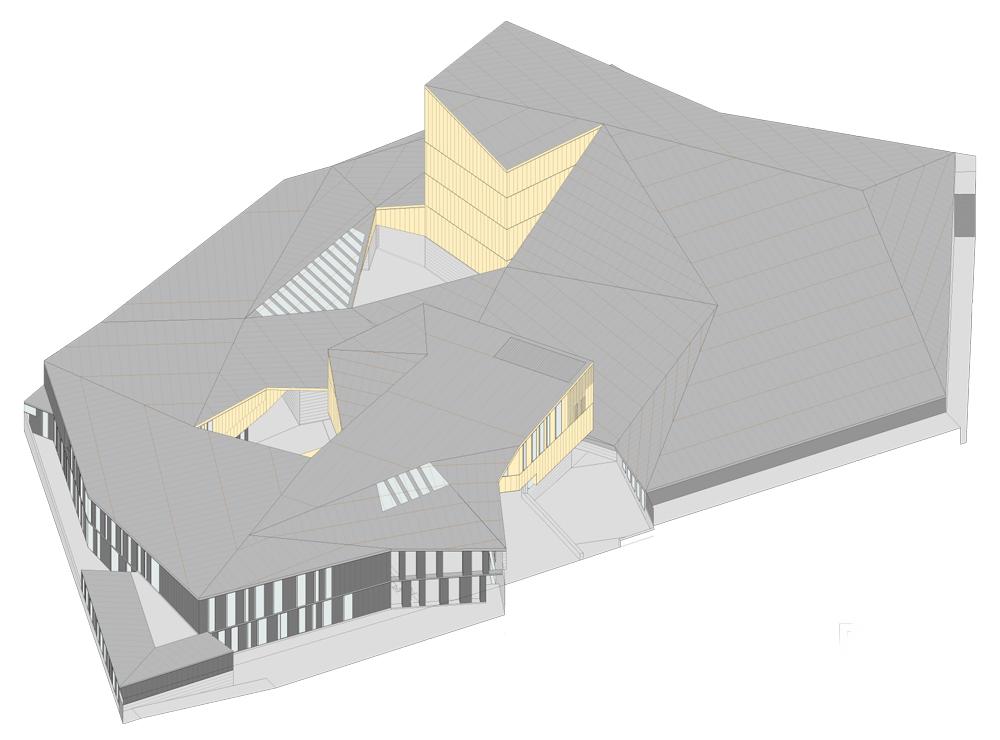 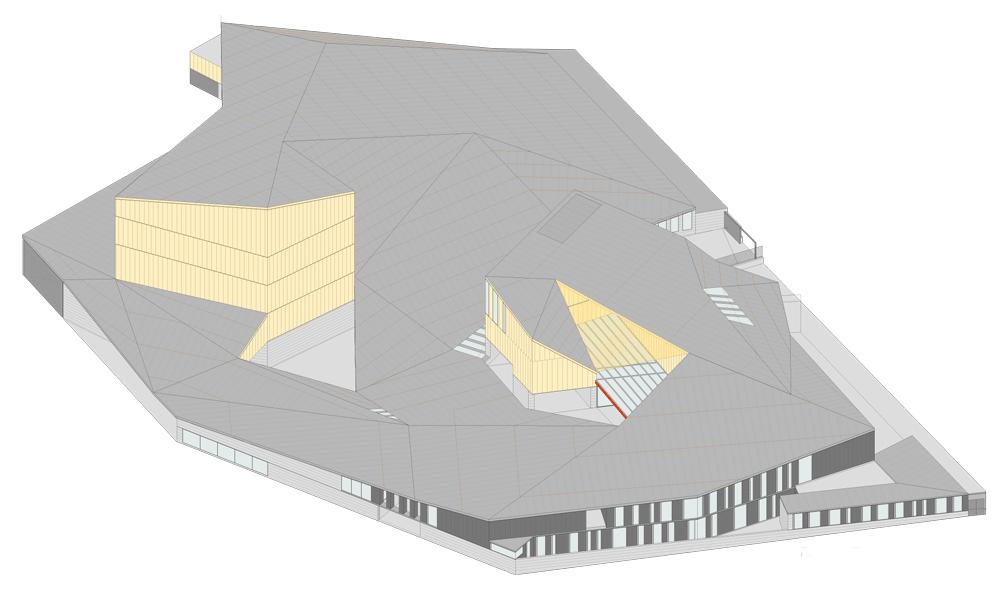 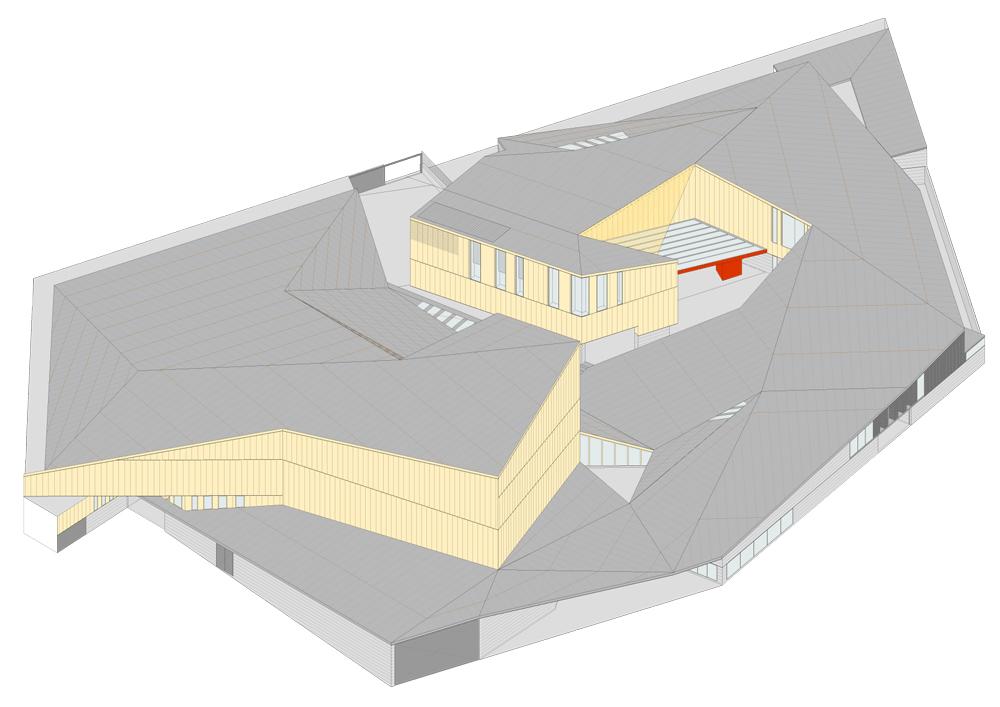 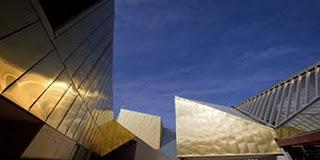 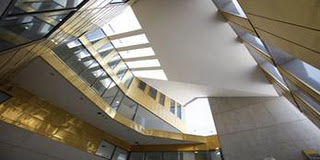 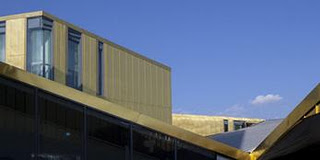 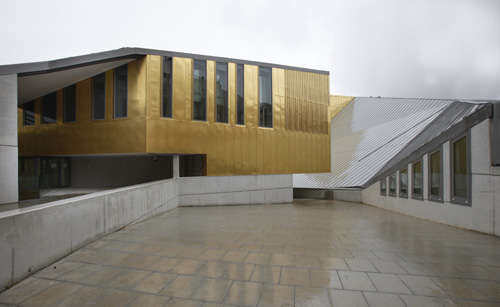 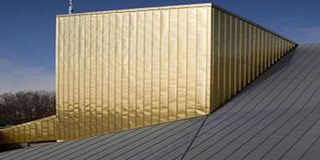 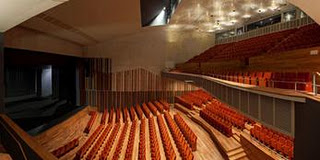 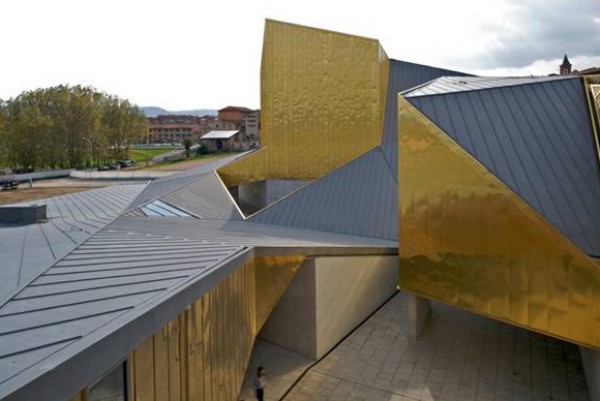 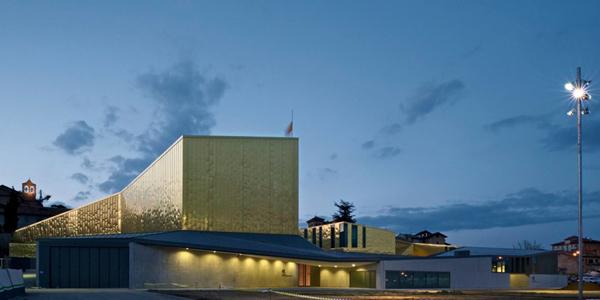 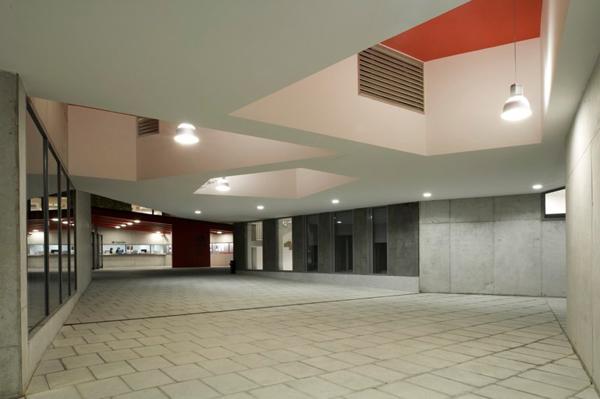 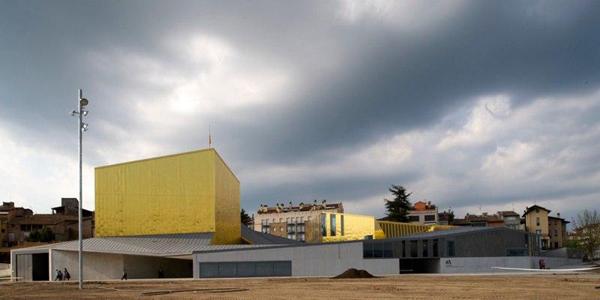 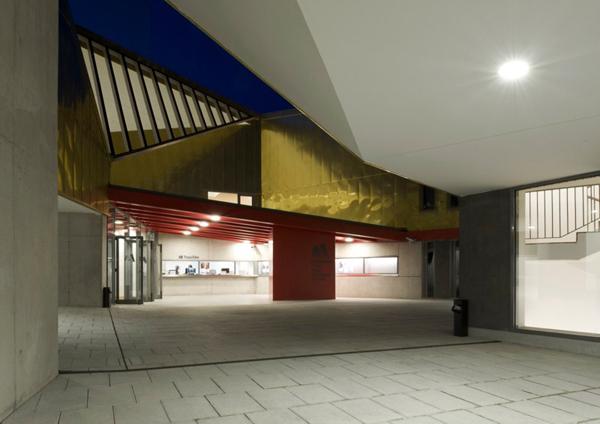 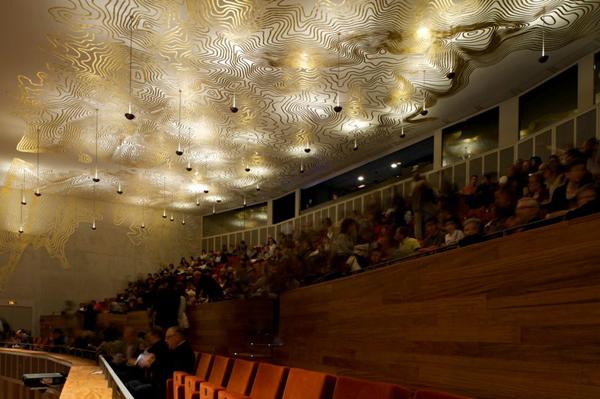 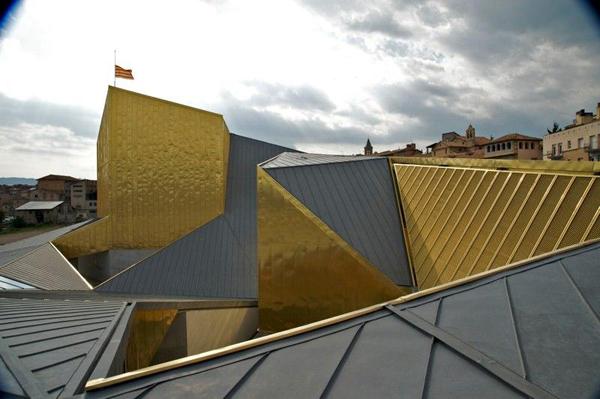 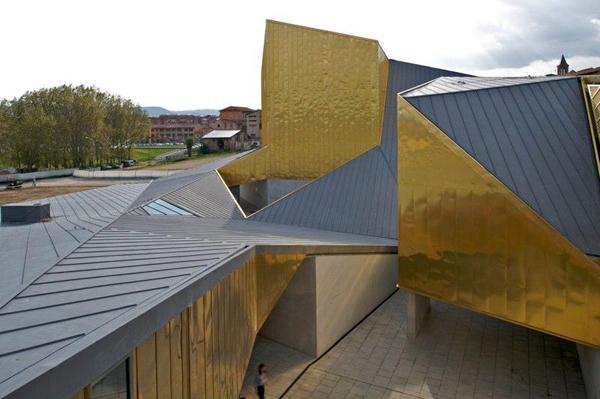