Kyobo Tower is located in the capital of South Korea, Seoul, where the new headquarters of the insurance company bears the same name.

The play was constructed between 1999 and 2003, after which the principal architect and reshuffled 17 projects with different heights and finishes. This is one of the tallest buildings in the urban Korean conglomerate, home to nearly 12 million people.

Far from responding to the prototype of modern skyscrapers, spiky and transparent, the new tower Kyobo refers to a totemic great sphinx, heavy and strong, becoming a strong and emblematic figure in the city. Its author said that this work would resist the monotony of contemporary language.

Marked by a long tradition in works of smaller scale, the Kyoto Tower architect was faced with the challenge of adapting their language to an unusual program for him. The main use of the tower is an office. Despite this, you can see large number of construction details similar to those used in religious or cultural buildings.

It is located next to one of the main crossroads in the city of Seoul. The introduction on this site and the contrast created with glass and steel buildings of the surroundings make it a point of reference in the urban fabric. Even in the basement contains a mouth tube that connects to other areas of Seoul.

The main facade is oriented to the east and is located on the Avenue of Kang Nam Rode.

The building emerges with a solid image, comprising two large volumes and a heart filled transparent.

The architect sought to get the most out of shape and texture of materials, choosing to take the brick structure, material that became once again the main theme of the work.

The tower of 26 floors and 117 meters tall, has a public and private. Ground floor is the public area, with a triple height space in the center of the plant, which is the atrium and lobby of the building. On both sides of this area of work units Korean insurance company.

The following 23 facilities are located the offices of the company Kyoto. Work spaces are organized around core areas. Here there is a rational approach in designing office space, making an order which is in contrast to the chaos of the city.

Access is by the main facade, in a staggered cut that leaves round columns with white stripes and gray, typical of the works of Botta.

Aiming to give a solid the whole image, the lens consists of two glass sides, which is not distinguishable to the naked eye. In these walls were built on a plot facing glazed brick that gives way, as if it was a false facade.

On the main facade, the building is distinguished as two vertical volumes, which at first glance seem twin towers.
For their part, north and south sides are nearly blind paraments expressing any opacity of the brick, as if to deny any view on these guidelines.

In the shot, a glass bridge of 18 meters in length re-unify the towers on the top floor. There lies a room for events. This bridge also fulfills the function of giving light inside the building, with very few openings.

In the north and south sides, the towers are surmounted by terraces covered with structures that glazed over. This protects the highest offices as well as floods of light.

Brick is the predominant material in the book. The structure is steel with reinforced concrete cores. The brick facades are precast concrete panels and structure. 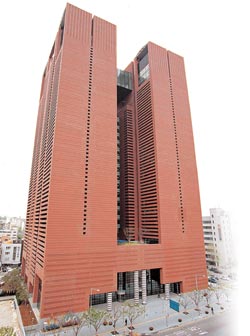 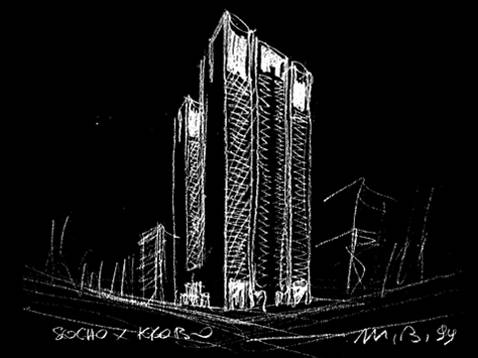 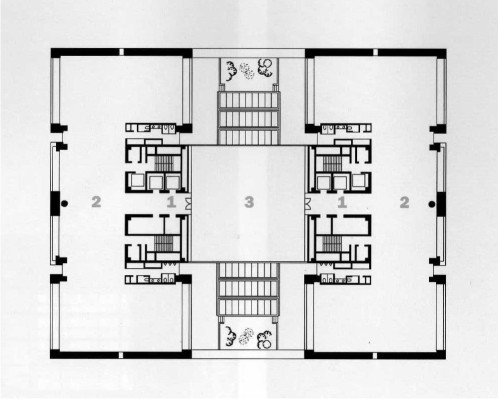 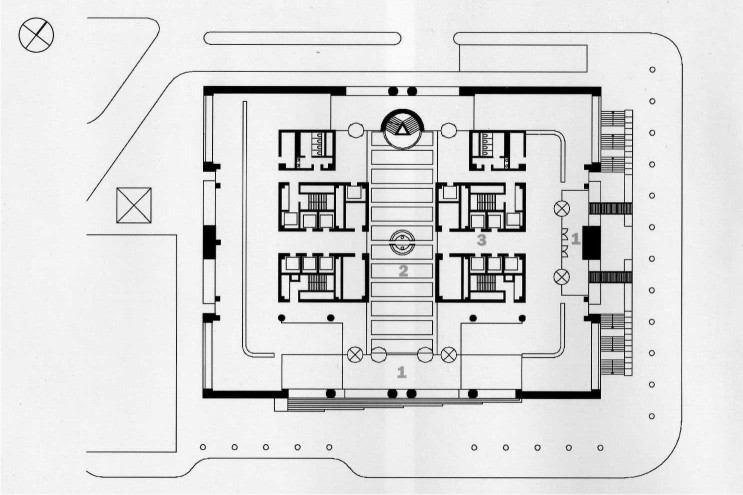 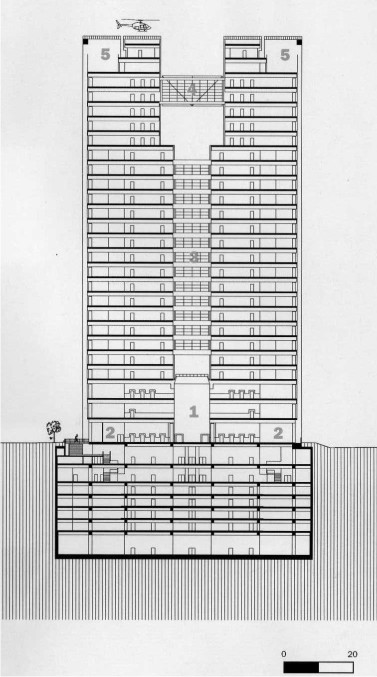 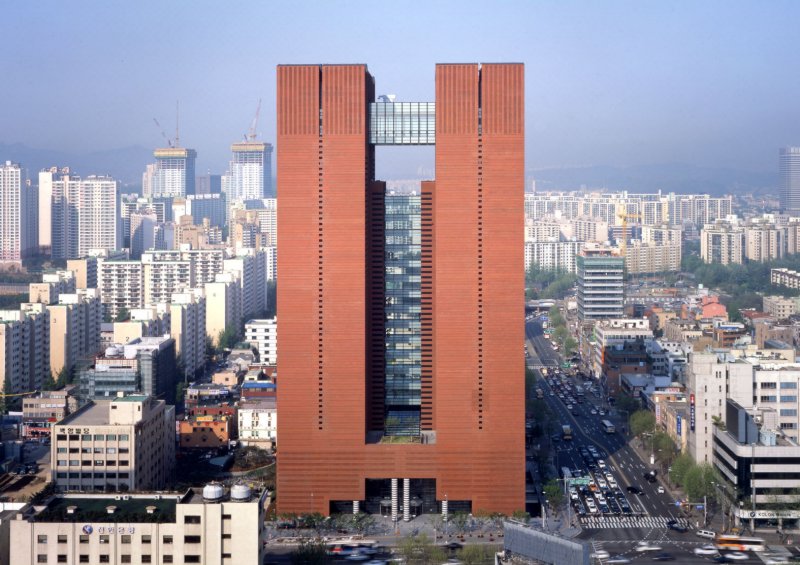 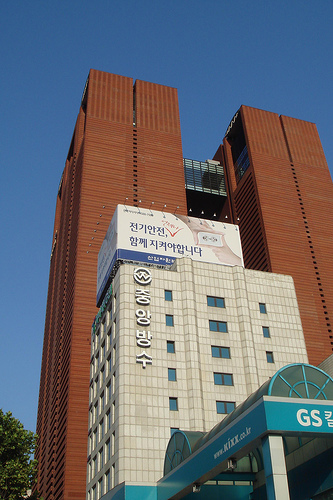 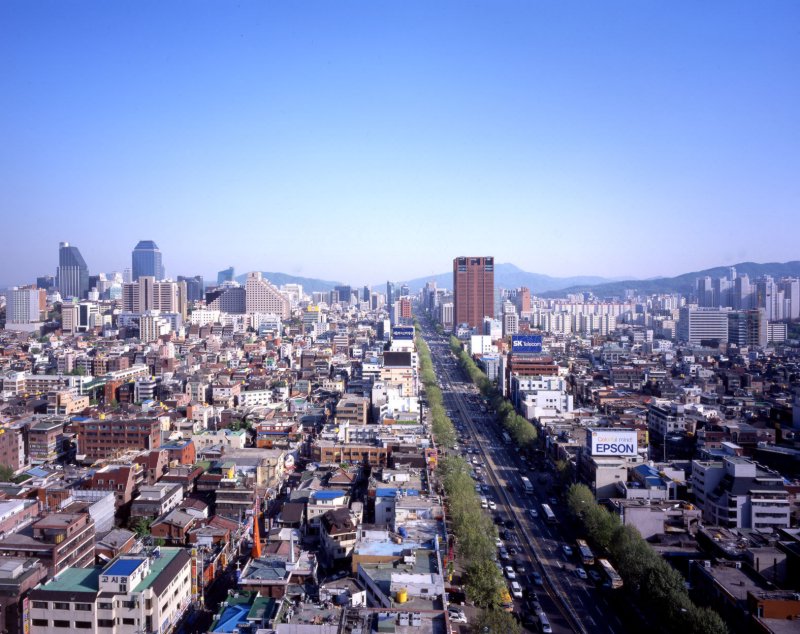 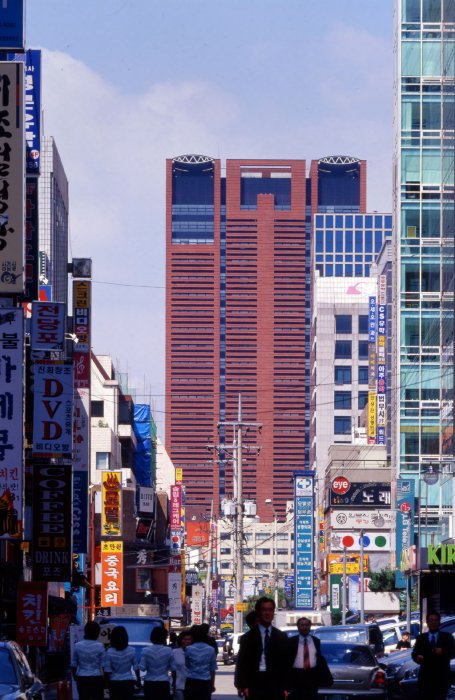 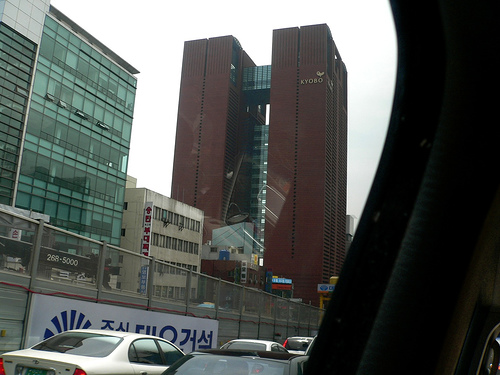 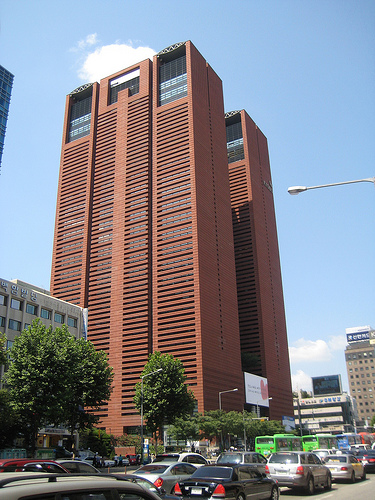 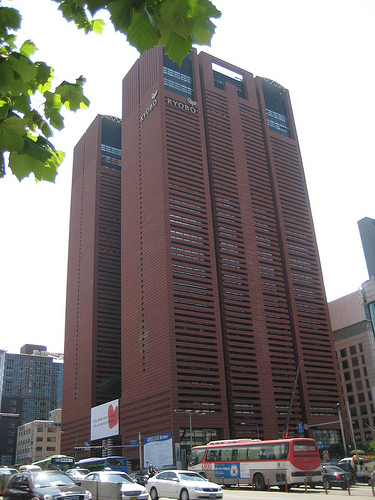 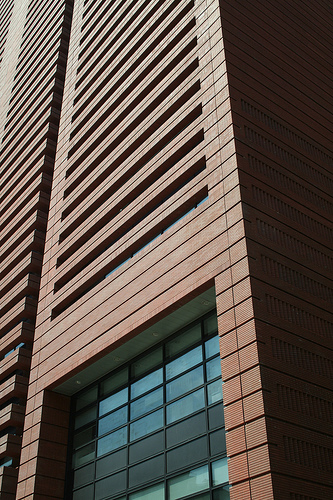 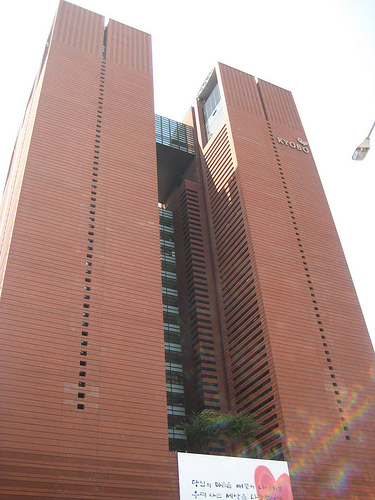 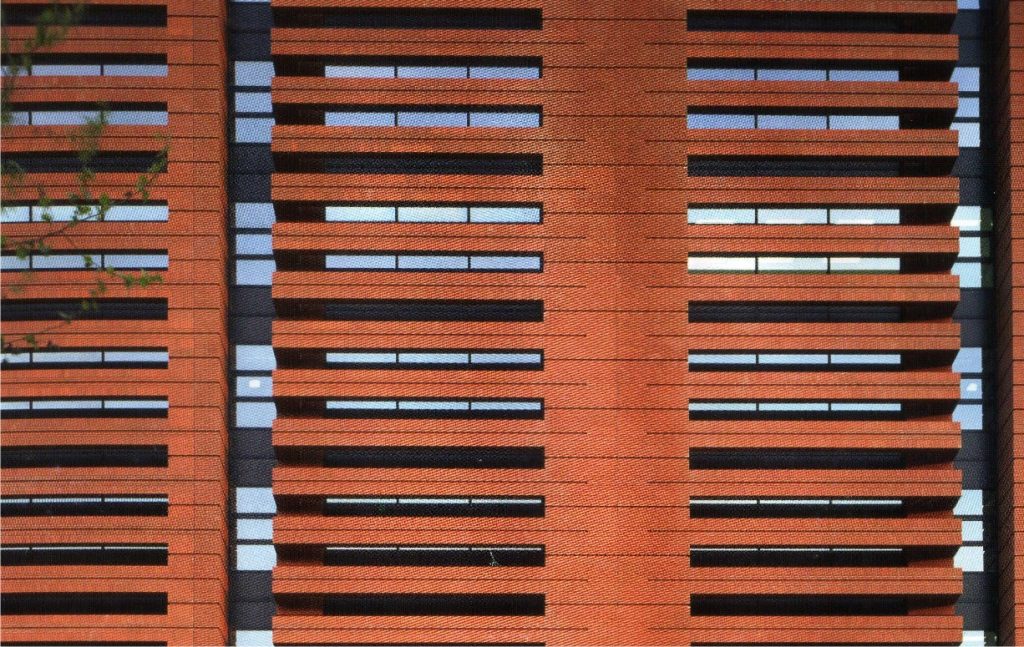 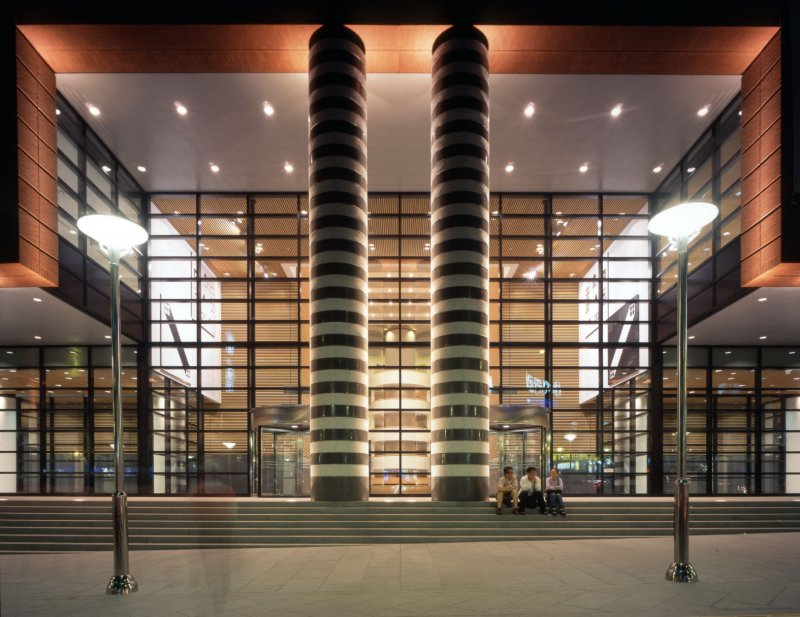 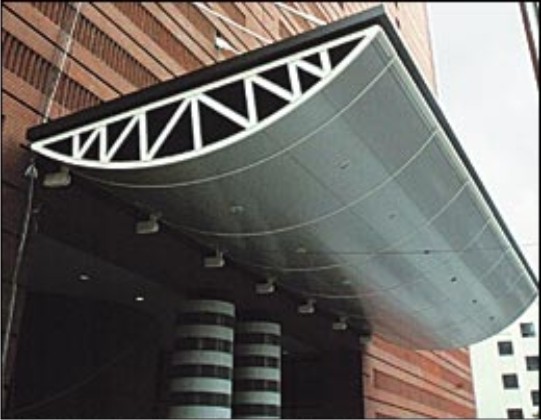 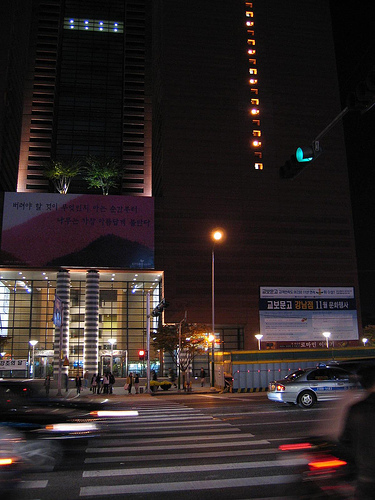 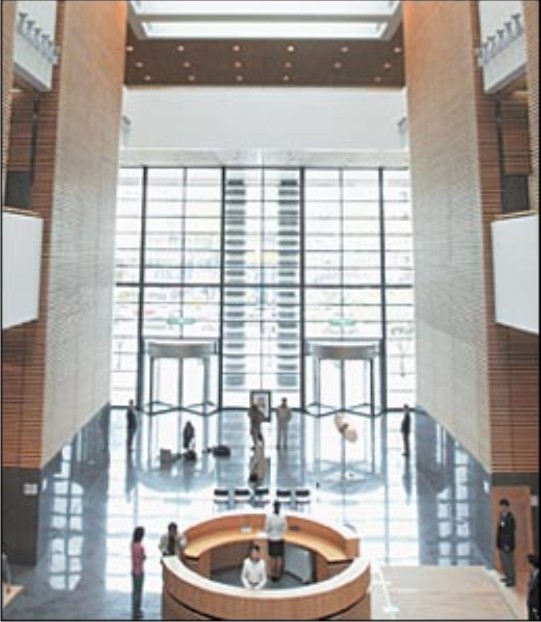 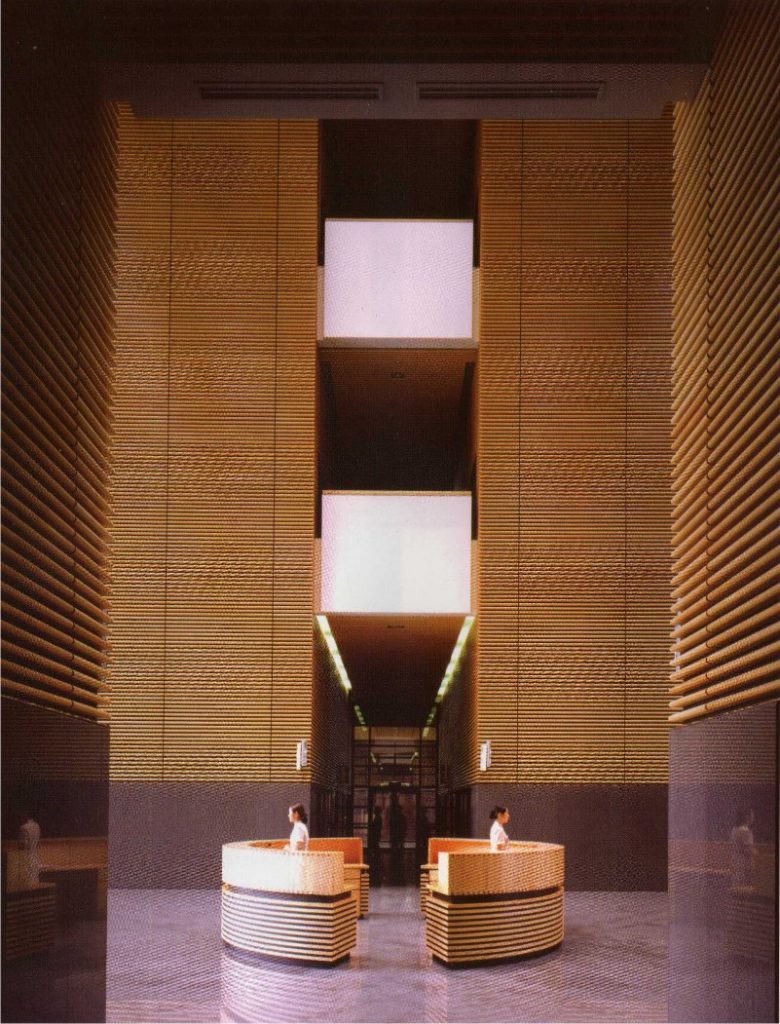 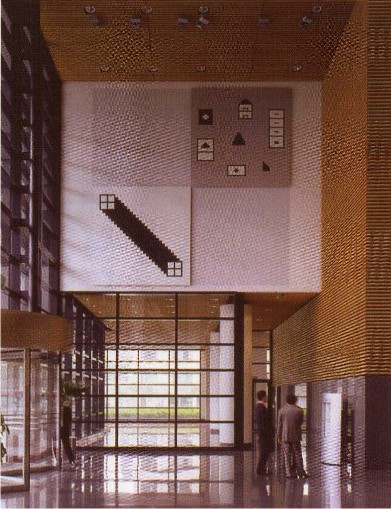 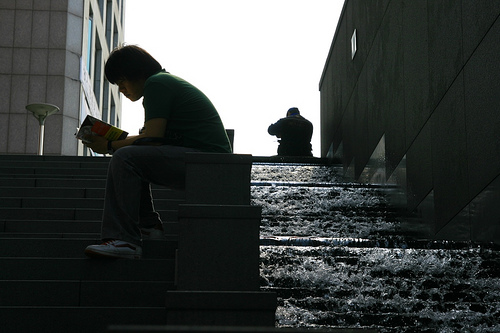 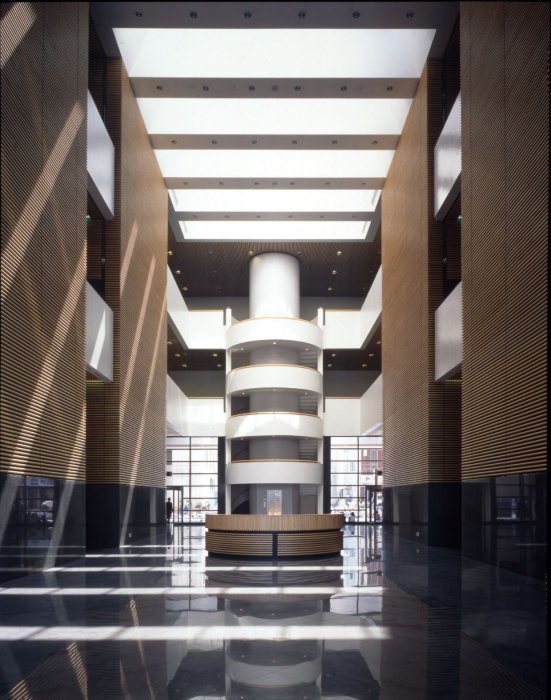