These water tanks with mushroom, known as the Kuwait Water Towers, store water at a certain height from the ground and provide suburban residences in the area.

The city had, in 1953, of two distillation plants seawater. In 1965 the Ministry of Electricity and Water commissioned the Swedish engineering firm VBB design a modern distribution system, connected to the two existing distillation plants. The new system should be able to ensure a constant supply of fresh water.

The 33 towers, with a combined storage capacity of 102.000m3 are the most visible aspect of the storage system and water distribution in Kuwait City.

Groups “Torres mushrooms” have been located in various strategic locations in Kuwait City, Kuwait and its surroundings.

To determine the location of towers groups the VBB team first determined the existing demands. According to their plans divided the city into six service areas, five of which were already functioning areas and a sixth is reserved for future expansion. These areas were organized according to the distance of the desalination plant, altitude, location and population density, varying the height of the towers to ensure proper pressure, creating a dual system to provide controlled distribution of brackish water or drinking as needed, provided by separate pipes.

The towers were designed both as architectural sculptures as functional needs. They are the most visible aspect of the supply and distribution of the water supply of the place.

The new distribution and service areas require the storage of large amounts of water at various locations. This includes the need to locate 9,000 m3 in the northern part of the city center, near the Persian Gulf coast.

At the express wish of Emir Jaber Al Ahmed Shikh special attention was paid to the three towers located on a promontory of the Bay of Kuwait. These three towers, different in design to the rest of completing the project, are known as “Kuwait Tower”, although the set is made up of three buildings, two towers of water and an upright concrete construction is completed.

The remaining towers were built following the design standardized form of “mushroom”.

The 31 remaining towers, the “Torres Mushroom”, are divided into five groups. Each reservoir has a standard capacity of 3000m3 and are supported by shafts of different heights.

The number of towers in each group varies between 6 and 9 and is determined by the consumption of each area. The towers are groups formed by pillars open rooms, which provide shade to the garden areas that develop underneath. Only two of the groups have landscaped gardens designed by VBB, others were developed by the Municipality and differ greatly from the first.

These towers were well accepted by the population to not project an overwhelming industrial image and allow the public use of the gardens that develop underneath.

The basic structure of the towers with heights ranging from 35-40m, concrete is being used two different structural systems, reinforced concrete and prestressed. In the construction of towers each group a modular scaffolding standard was used for mounting sliding formwork and prestressed concrete was poured in situ to accelerate construction, mixed with sand and gravel collected in the desert.
The shuttering of the mushroom-shaped tank was designed with prefabricated elements mounted at ground level and then hoisted to its final place for dumping. After pouring and prestressed shell, pulled the formwork and prepared for reuse. With this standardized 31 were built towers, quickly and accurately, easily allowing the difference in height and the number of towers each group.

The conical shape of the deposits, was a design economic structurally and functionally appropriate and aesthetically pleasing. The slope of the walls of the sheath was estimated to direct the downward forces from the reservoir towards the axis, in a continuous and uniform. This constant and uniform force generates low voltages, allowing a minimum of concrete and reinforcements. The relatively small size of the deposits, each 3000m3, is economical, as it facilitates rapid discharge, especially important in hot weather Kuwait. The inverted conical shape ensures the supply at a constant pressure, even lower levels of water. 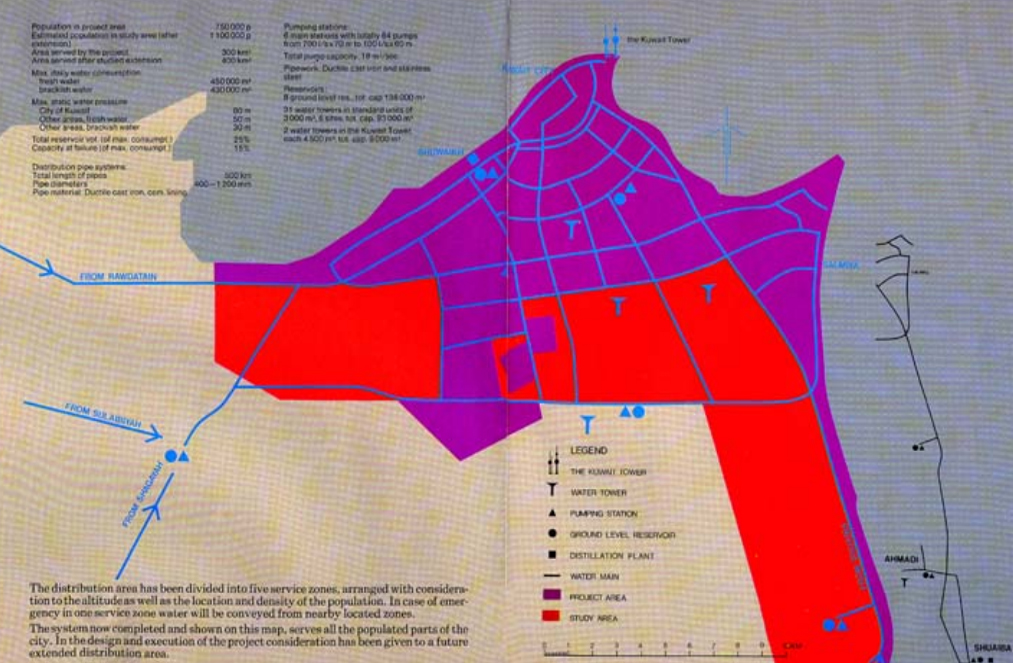 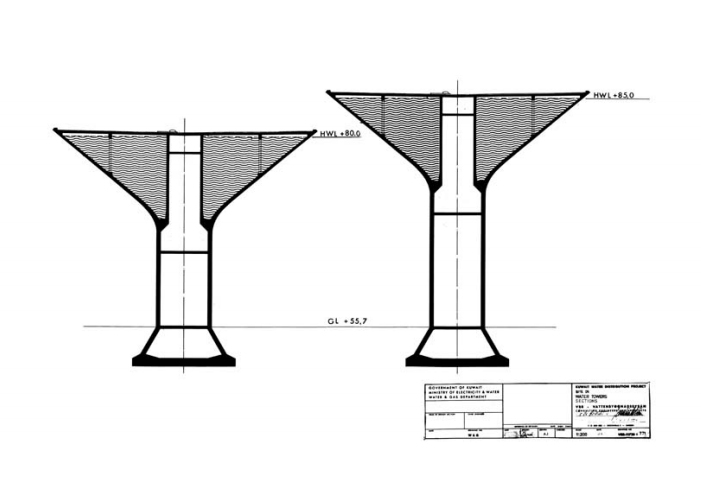 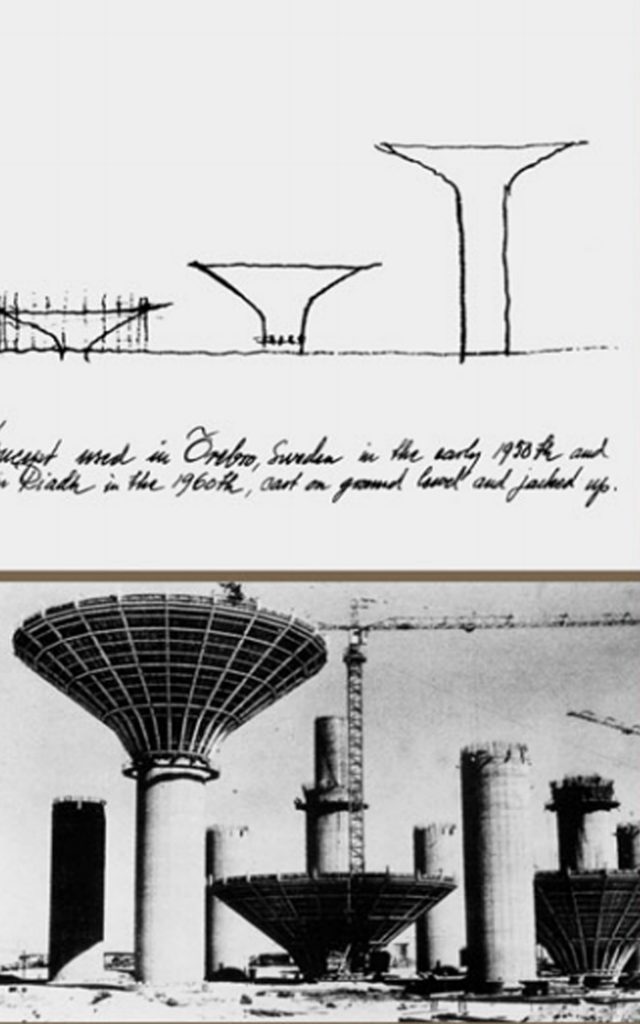 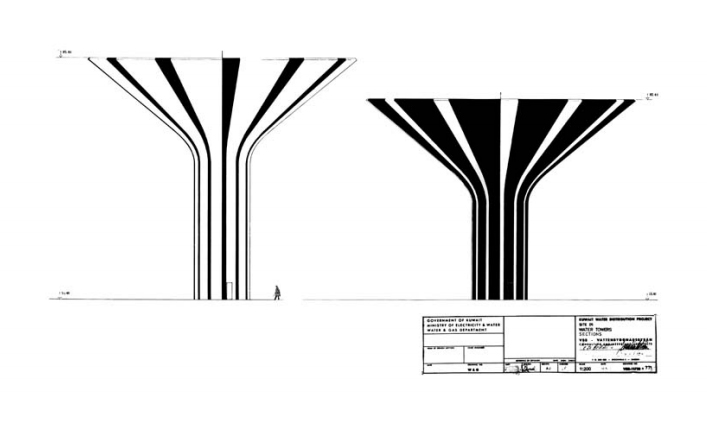 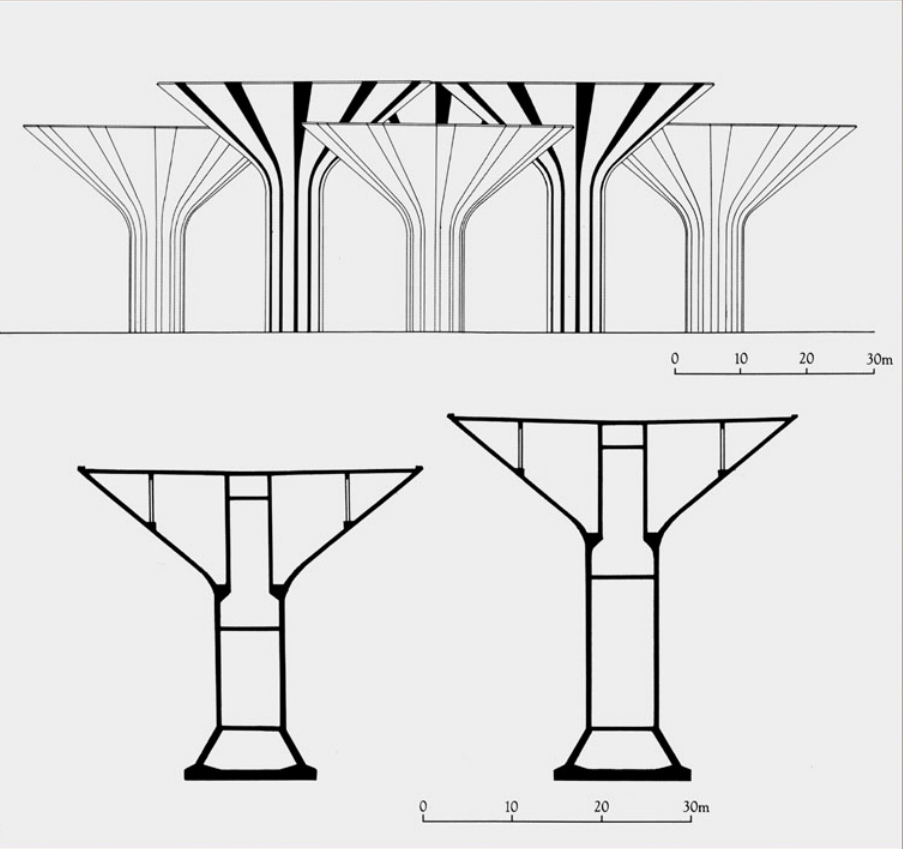 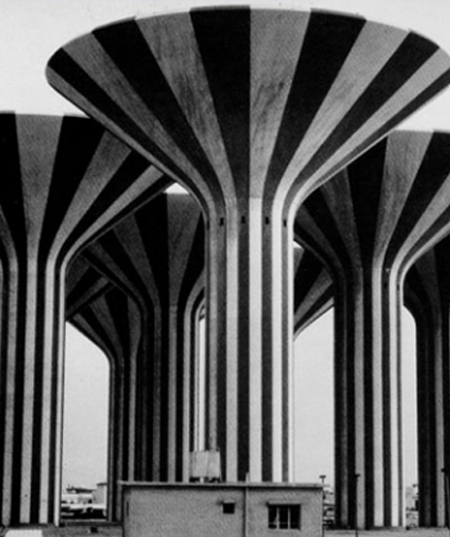 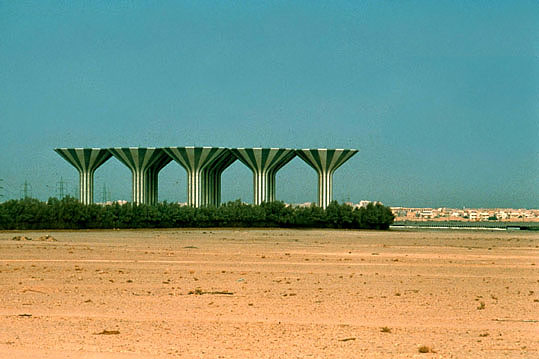 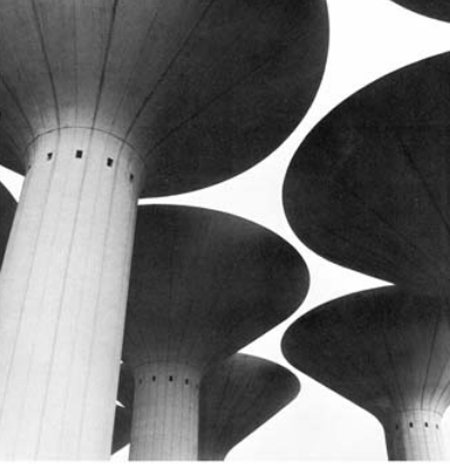 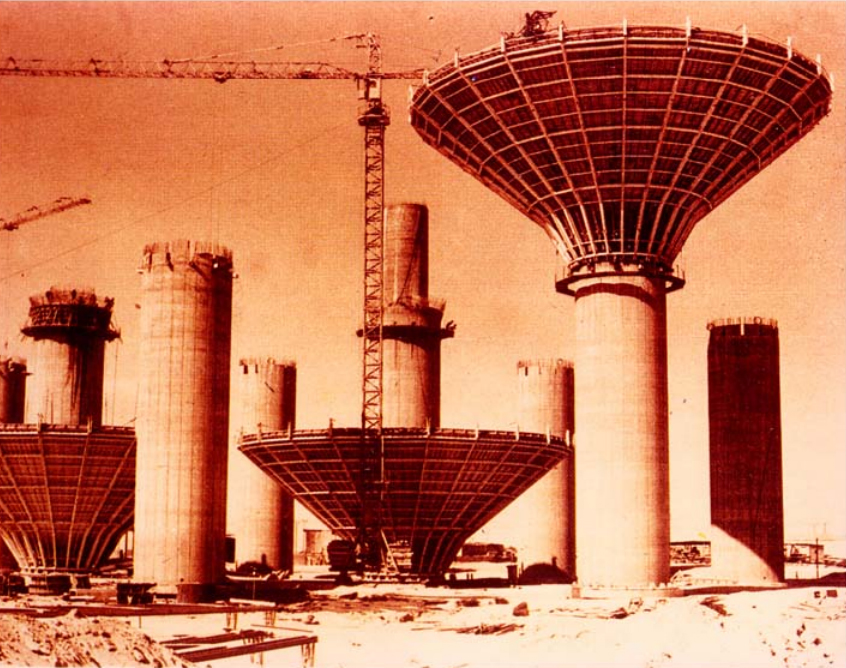 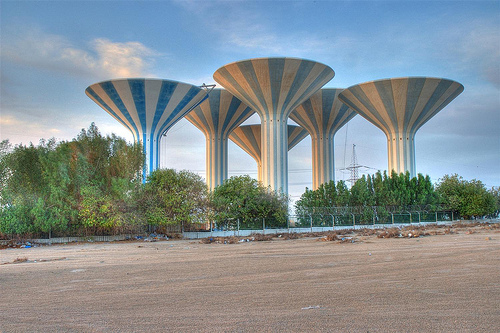 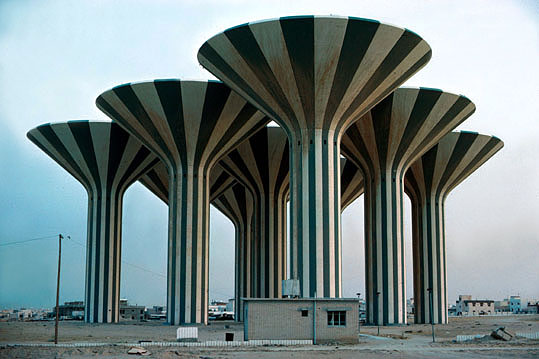 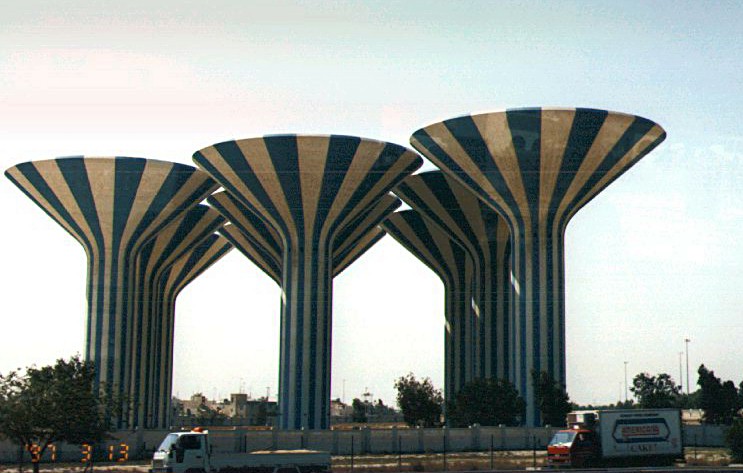 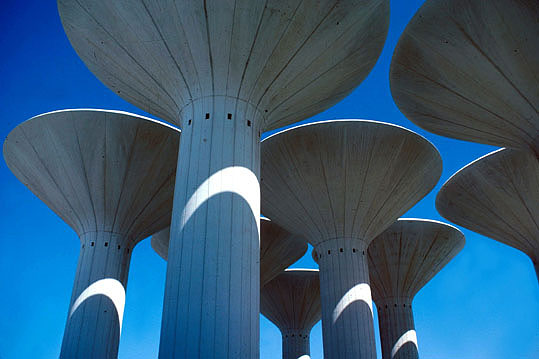 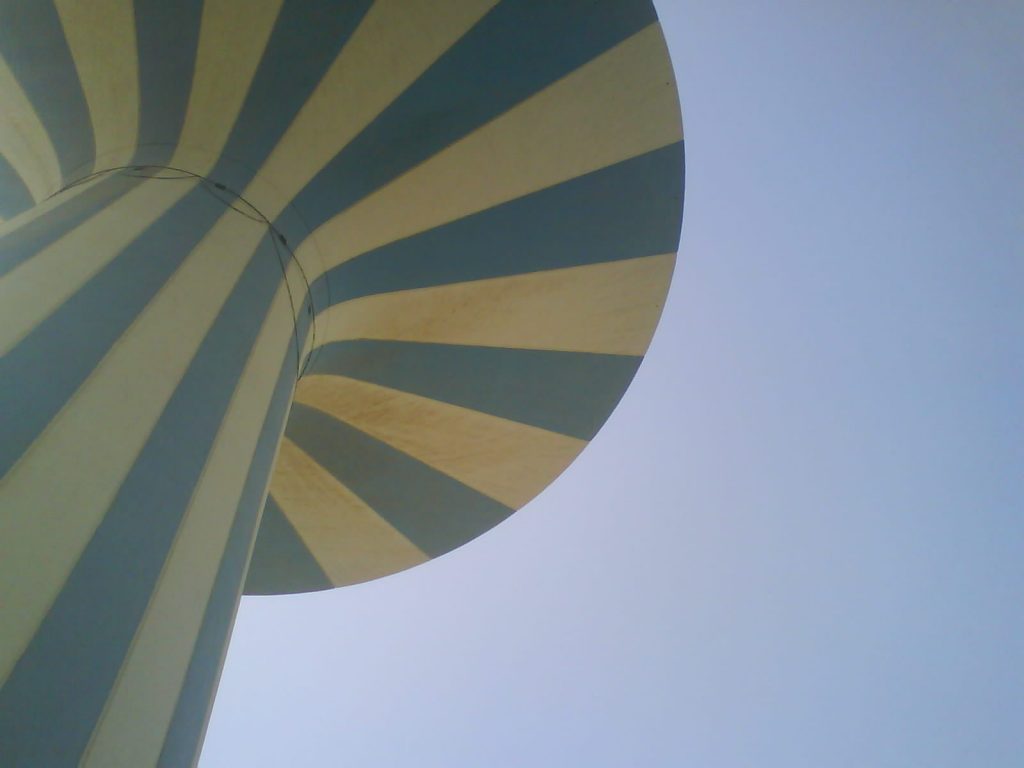 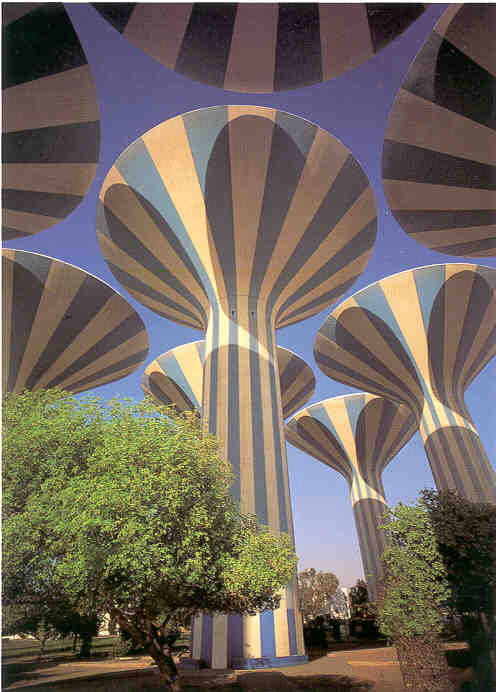 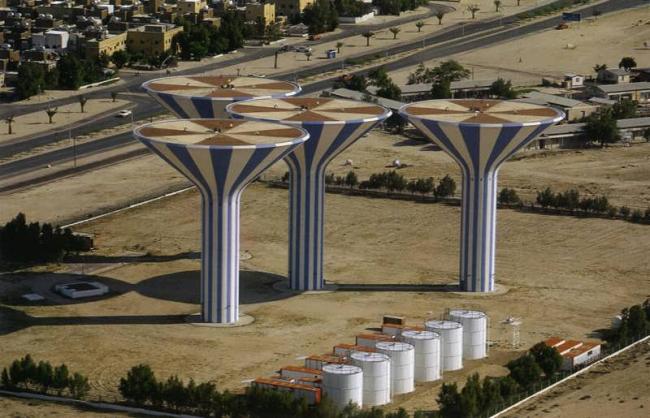 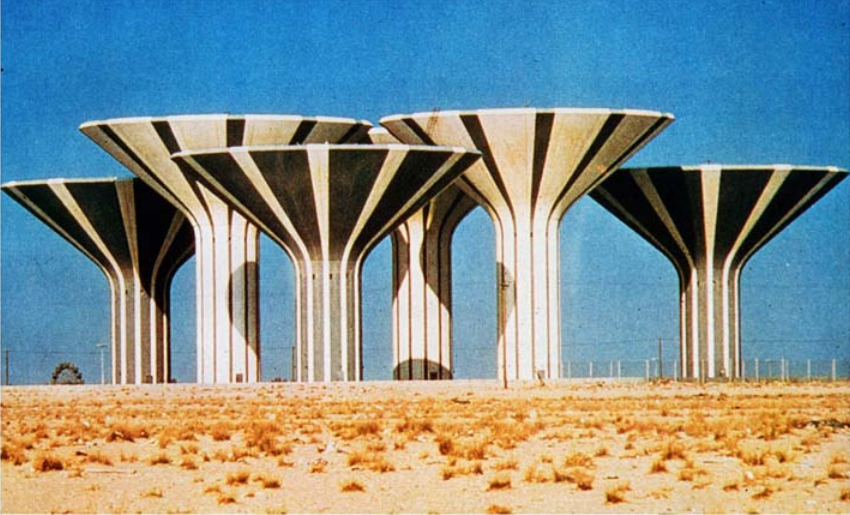 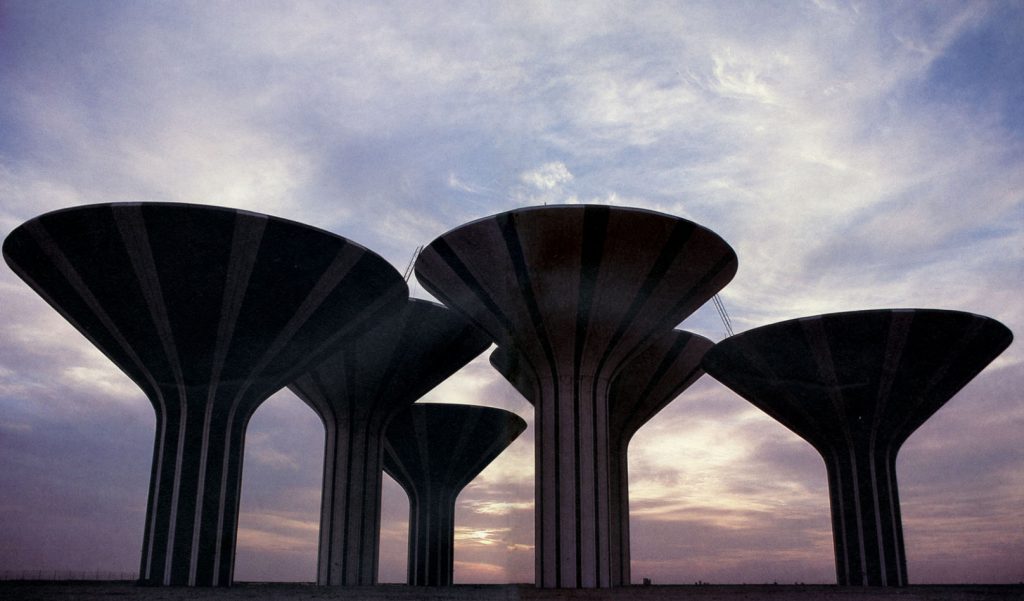 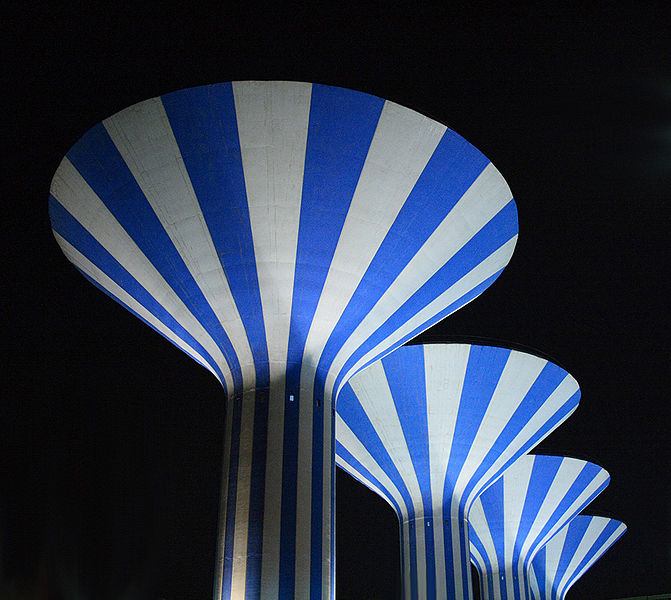 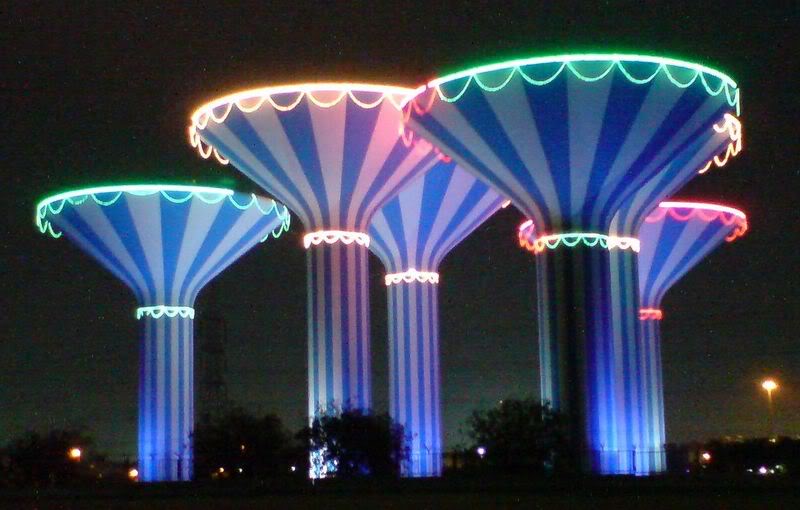 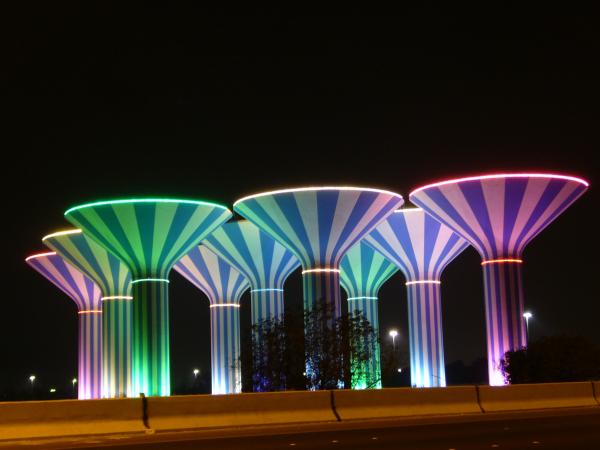 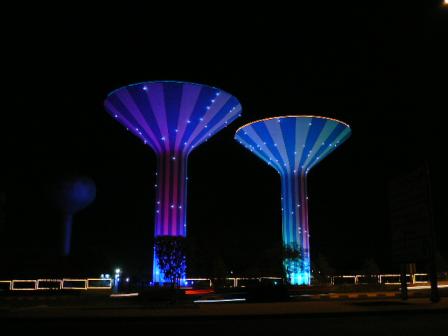