Designed by VBB Swedish Engineers, Sune Lindström and Malene Björn and built by RAD, contractor Belgrade company, Tower of Kuwait (أبراج الكويت) name generally used in the singular but references a group of three towers, was inaugurated on March 1 1979. Its construction was part of a water distribution project, run by a Swedish company whose architect Sune Lindström, erected five groups of their typical water towers “mushrooms”, but the emir of Kuwait Sheikh Jaber Al-Ahmed, wanted a more attractive design for the sixth group. He presented 10 different designs, opting for the one presented by Danish architect Malene Björn.

The Tower of Kuwait was, along with Kuwait Water Towers, awarded the Aga Khan Award for Architecture (1980). During the first Gulf War in 1990-1991, the towers were damaged and repaired in 2012.

The towers were located in the northern part of Kuwait City, close to the shore of the Persian Gulf. At the express wish of Sheikh Al-Ahmed, at the time the design was necessary to pay special attention to this group of towers located on a promontory overlooking the bay of Kuwait position from which dominate the surroundings.

According to architect Kuwait Towers refer to the ideals of humanity and technology, represented by “the sphere of the world” and “rocket” technology. The towers have become an urban monument symbolizing the progressive economic renaissance in Kuwait as well as a point of World Cultural and tourist landmark.

On the other hand, the reference to the historical past, through the minaret with colorful coating enameled steel plates in the treatment of the spheres, and inspired by the mosaics that cover the domes of mosques and shrines, complete the design.

A water tower always stands on the construction of the city. Place a deposit with a considerable volume of water above the highest buildings in the area can give the project an impression of heaviness and imbalance. The Tower of Kuwait has a sensitive location from this point of view and have had to consider many solutions to counter these effects.

The main tower, with its two spheres and 185 meters high, as the second tower, are “reservoirs”. The third tower, with its extreme form of thin needle, has been built primarily to complete the sculptural unit, but also harnessed for electrical equipment. Together the three towers form a harmonious whole and varied, a completely unique architectural creation, almost a sculpture, which contrasts sharply with the lowest environmental buildings.

Rising to a height of 185m above sea level, this concrete tower consists of ground floor and two areas, the main area and gazebo area.

On the ground floor there is access to a large reception room, Royal Hall, with an Arabic restaurant abroad. The elevators transport diners and visitors to the area first or second, to the observation deck, using a separate entrance and elevator.

A 75m above sea level, the main area intended his bottom on a water tank with capacity for 4,500 m3 and top offers restaurants with capacity for 90 people, an indoor garden, cafés and two reception rooms, Al Waha and Dasman, with capacity for 50 people. Since public spaces you can see the Downtown Kuwait and the Arabian Gulf.

Leaving the elevator, the visitor finds a bright lobby where born a curved marble staircase, but what attracts are the spectacular views from its circular glass wall. Going down the stairs reach the floor of the restaurants and the support area to the kitchen that is located on the lower level. On the floor of the restaurant is the inner garden, access is by stairs born in the lobby. With its high vaulted ceiling, is large enough for receptions up to 400 people.

It situated 123m above sea level and fully enclosed with glass, becomes a panoramic observatory Kuwait City. This rotating sphere makes a 360 ° rotation in 30 minutes. Within this plant a souvenir shop and cafe rápida.Esta, although smaller upper sphere, also has two levels, the observation deck on the lower level and coffee are included in the above.

At 147m above sea level, is not publicly accessible tower is supported by a spherical tank with a capacity of 4.500m3 of water.

With a height of 113 meters above sea level, the third tower is a concrete needle also serve to complete the composition, equipment saves electricity and illuminates the other two and the surrounding grounds.

For architectural and town planning reasons, the Tower of Kuwait had to be built near the coast where ground conditions are bad. Complicated foundation and the height of the towers, the main 185 meters, made it necessary to use high-tech methods in design and construction, to solve foundation problems.

The foundation piles were drilled and filled in situ reinforced concrete. The foundation slabs of the highest towers were performed with prestressed gear in anticipation of possible cracks. The axes of the towers and tanks were made of concrete reinforced with iron. The structure of the reservoirs was subjected to compression prior to commissioning, steel wires were tensioned and anchored to concrete.
Shafts high towers were erected with a sliding formwork and concrete using various types of both axes and shells, since the sealing strength requirements and were high. The most commonly used concrete strength was 35 and 40 MPa. During the months of May to September could not work on the completion of watertight structures, as temperatures exceeded 40 degrees, having to cool the ice water.
The system used in prestressed concrete slabs and walls of the tanks was BBRV wiring, a resistance to 1.38 MN. Prestressed ribs placed inside, allowing an interior workspace band protected by prestressing the inside walls of tanks and leaving a smooth exterior.

To ensure the effectiveness of the lightning rods placed at the tips of the three towers, the metal plate that covers was welded to the structures of metal reinforcement axes, including water, and put numerous copper wires running from the apex to ground points.

The towers were built with reinforced and prestressed concrete, glass and enameled steel plates spherical.
The solid spheres of the towers are finished in concrete and were then coated with concave and round enameled metal plates. This type of coating gave depth to the design, being a different material, with different characteristics to the shaft. The end result was an icon of three simple concrete shafts, bearing three complex areas.

The spherical parts of the towers are coated with approximately 41,000 pieces of Chinese steel, enameled with eight different shades of green, blue and gray, combining a reassuring harmony between blue water and sky, while evoking tiles traditional mosques. The discs are arranged in spiral patterns around the spheres.

Patterns can be created as a structural method or aesthetic reason. Kuwait Towers have two types of patterns due to the complexity of the spherical shape. The system triangular reflective glass with aluminum frames, was applied on the scenic area to allow transparency and the view. In the rest of the public areas are also radiating crystals-reflective to combat the high temperatures and sunlight.

Each tower tip is covered with stainless steel serving as a lightning, grounded through the steel reinforcements of the axes, as well as by the water pipes and the copper wires.

Most of the cement used was locally sourced and gravel collected in the desert mix, sand like, prior to use which must be washed in order to avoid deposits of chlorine and sulfate salts.

In public indoor areas are marble floors are covered with carpet or. 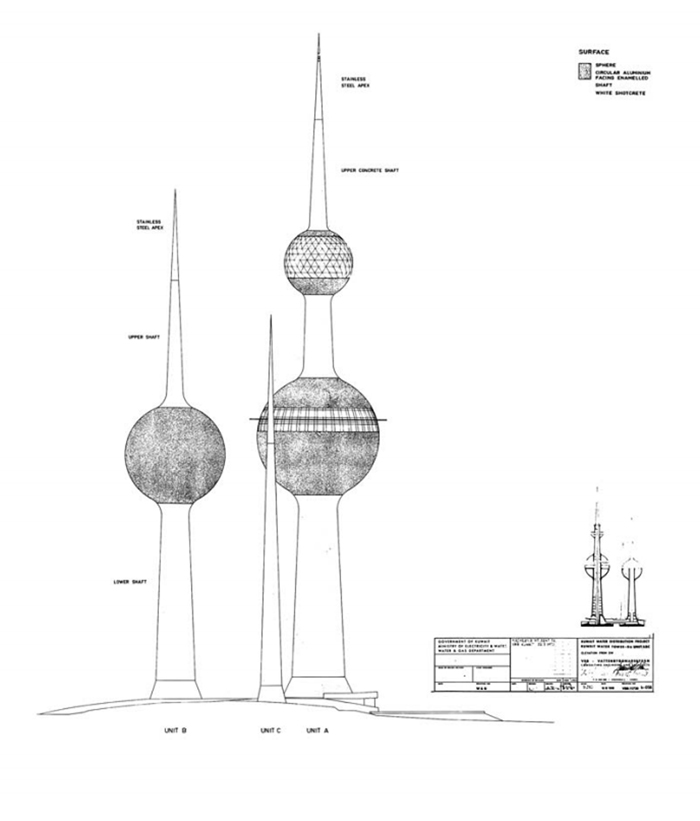 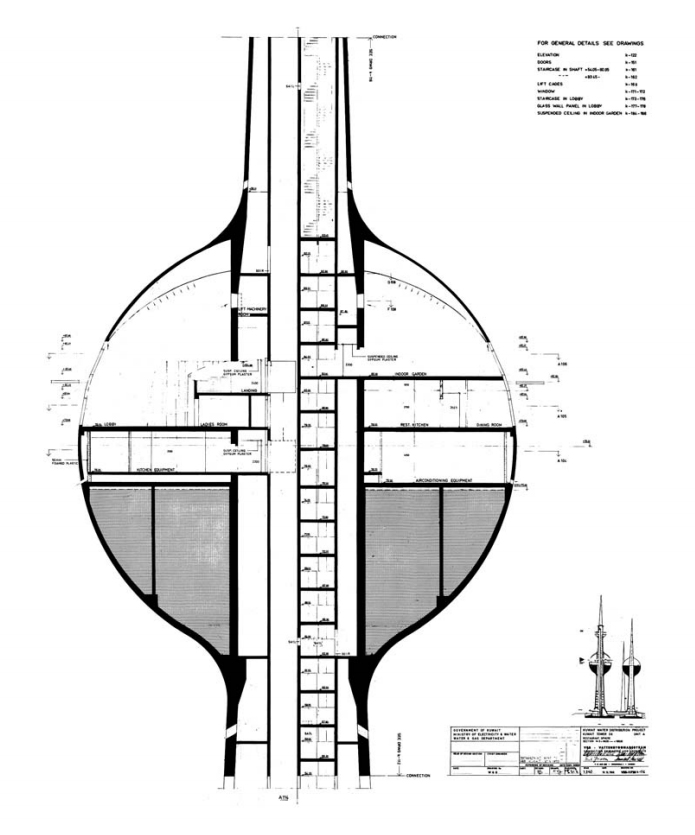 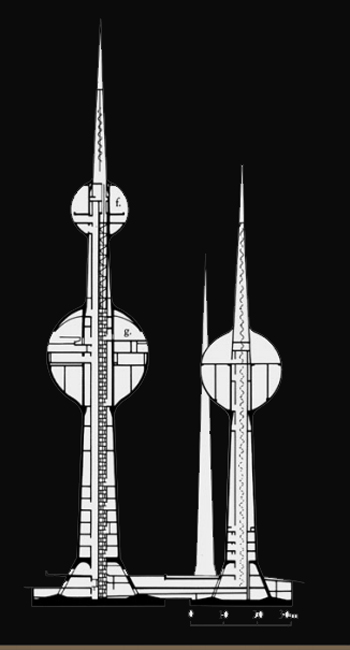 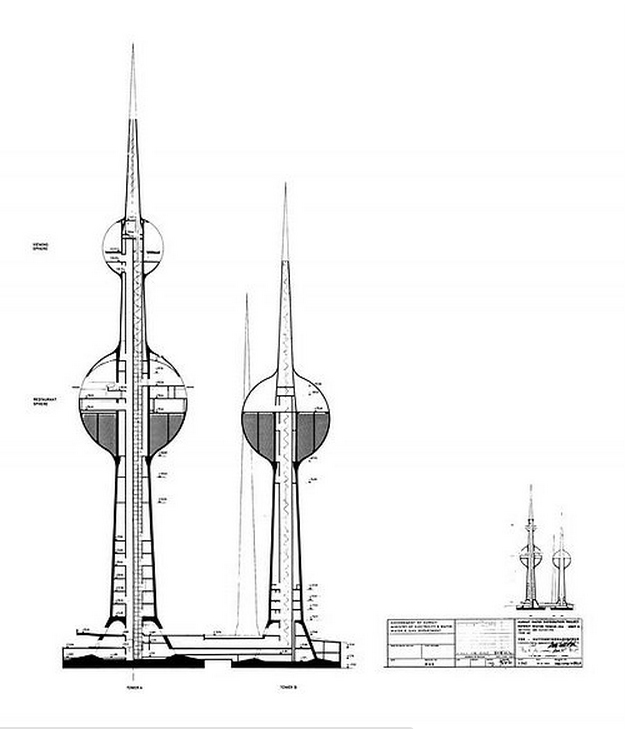 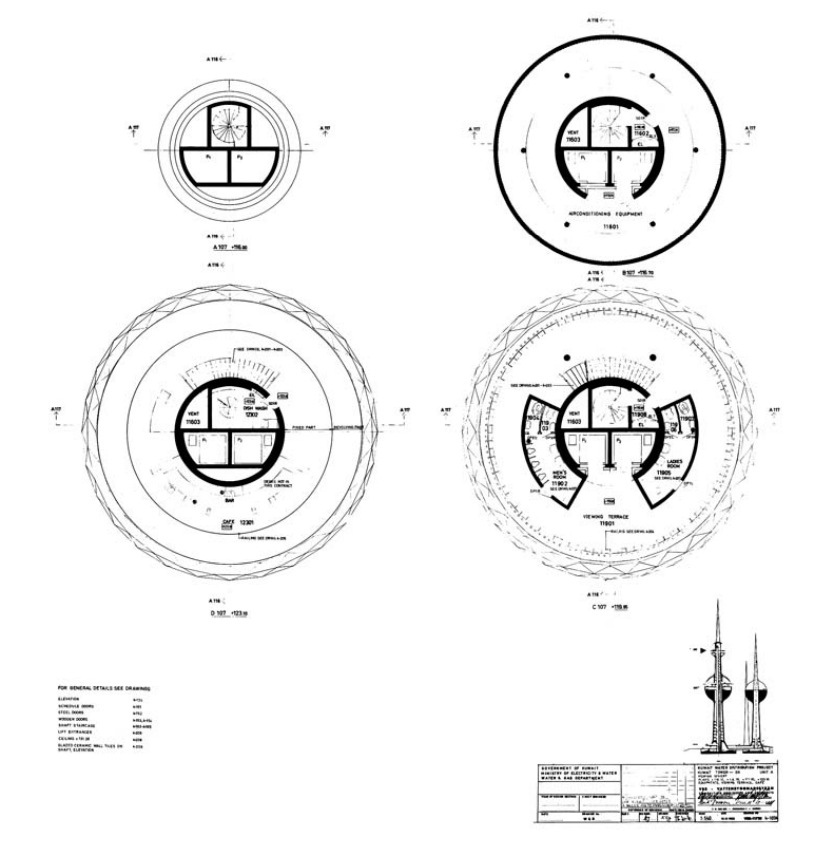 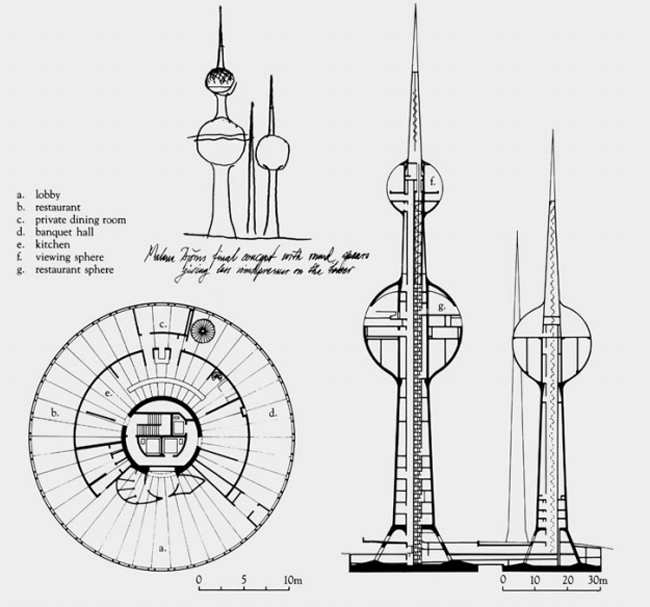 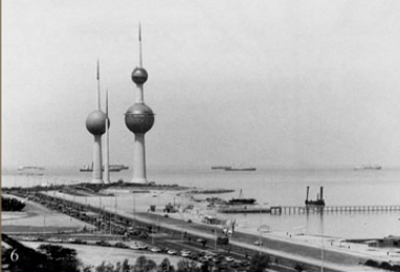 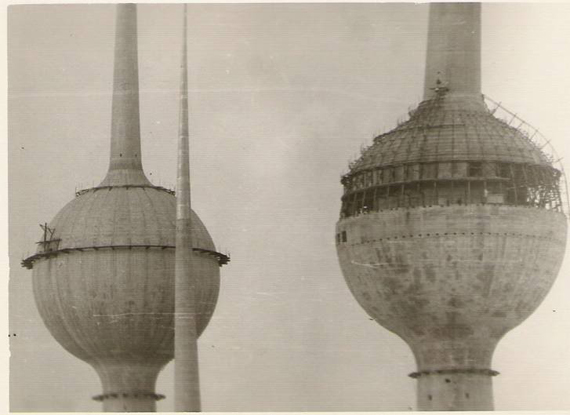 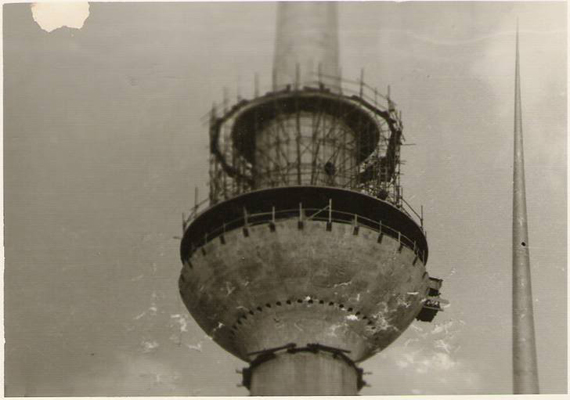 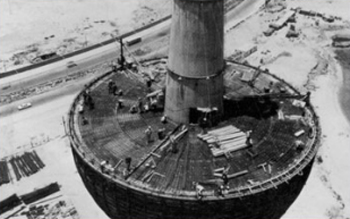 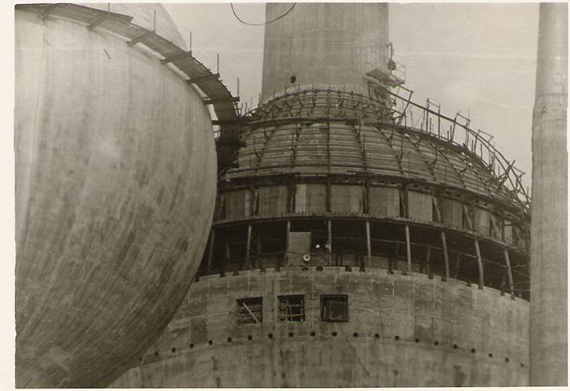 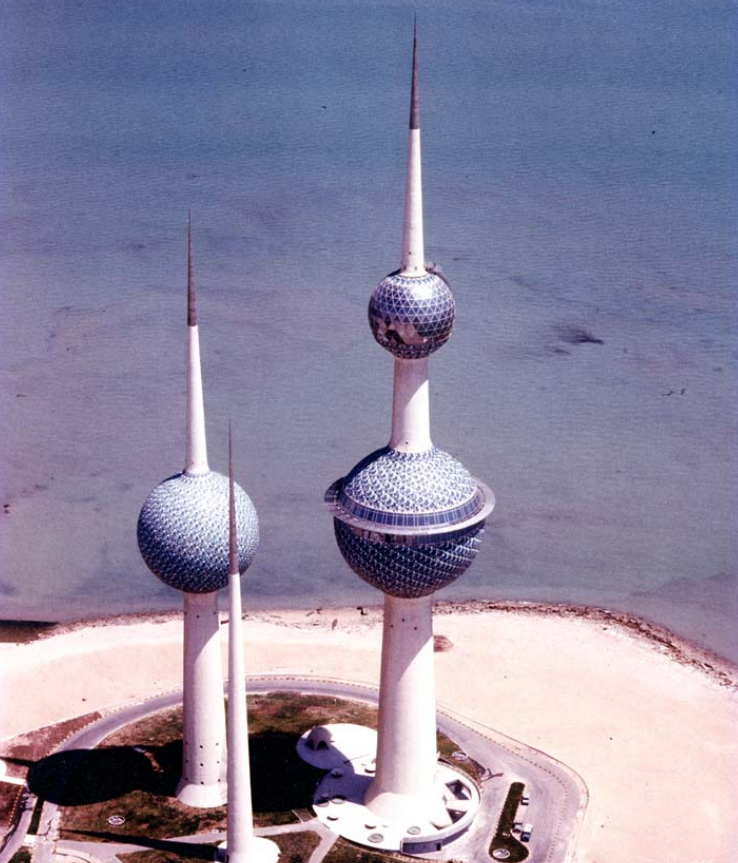 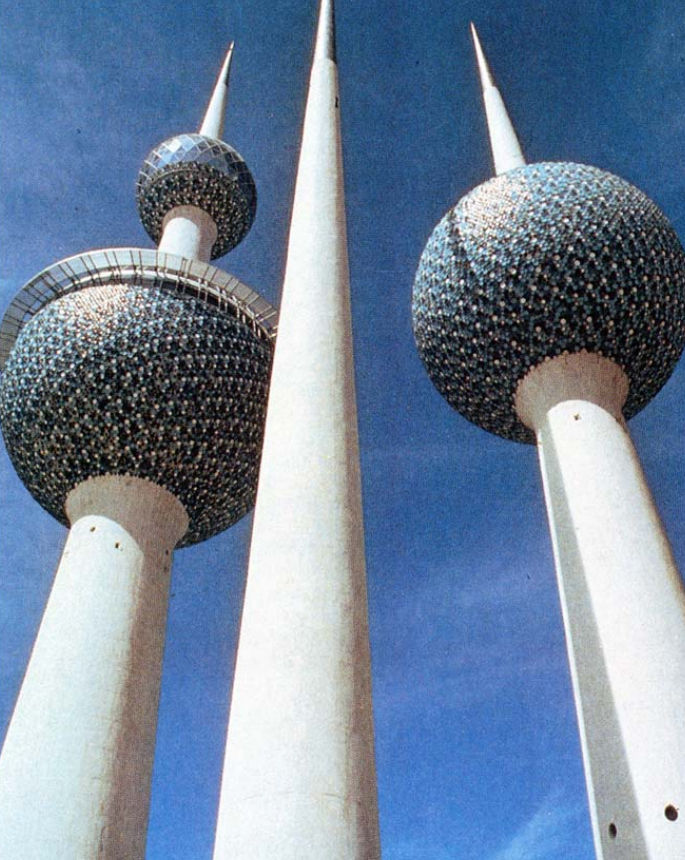 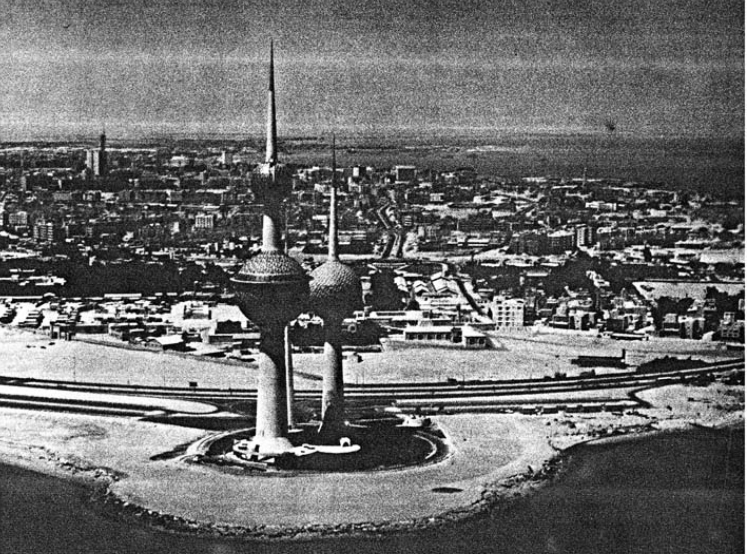 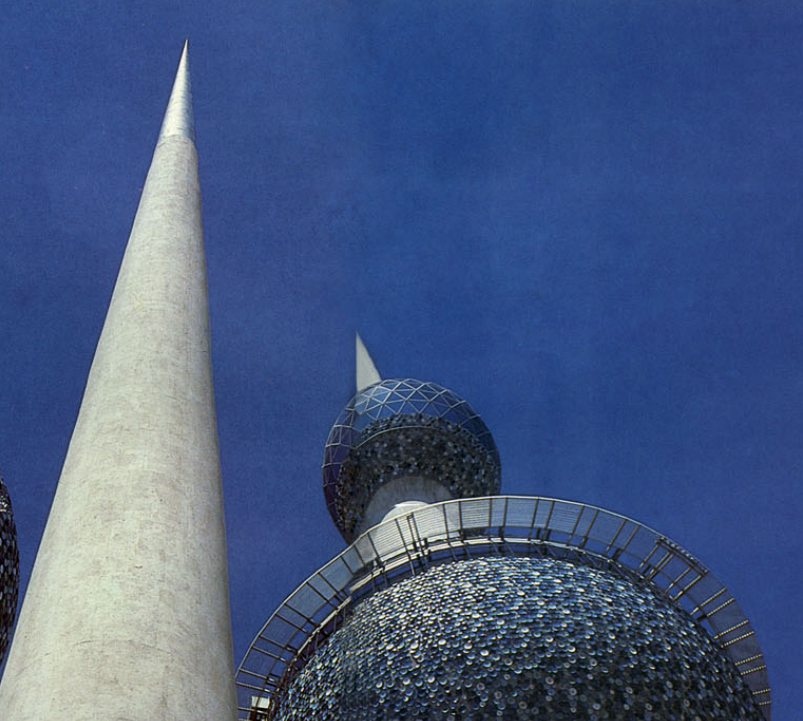 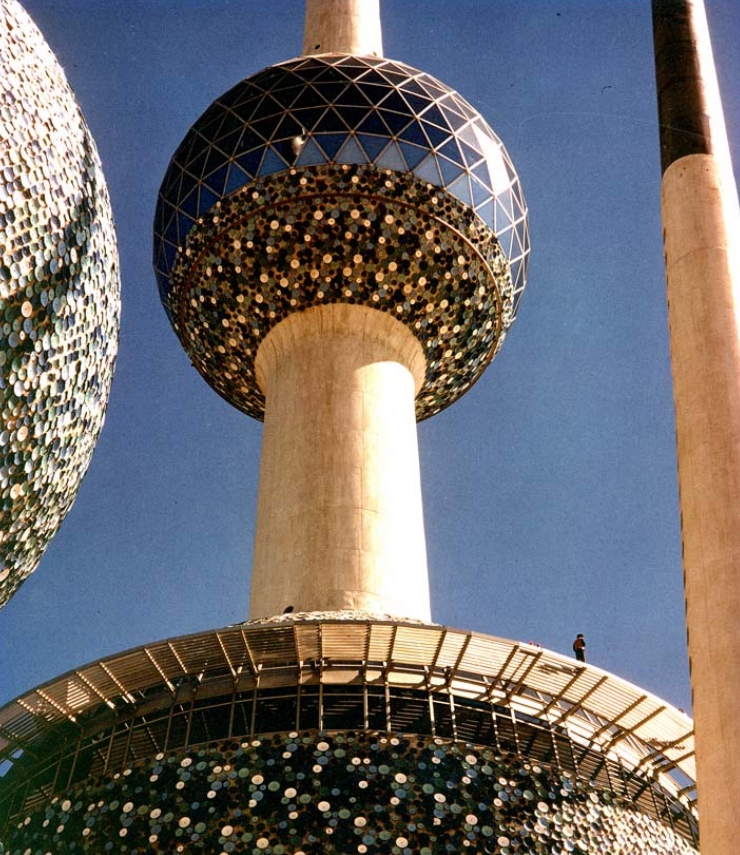 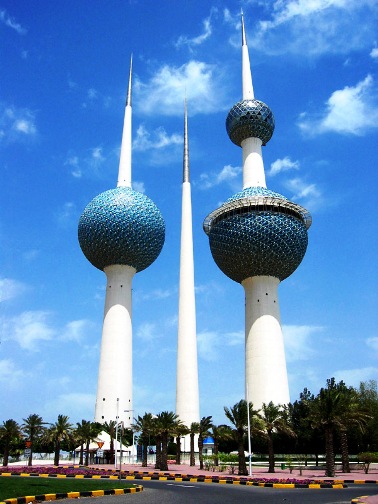 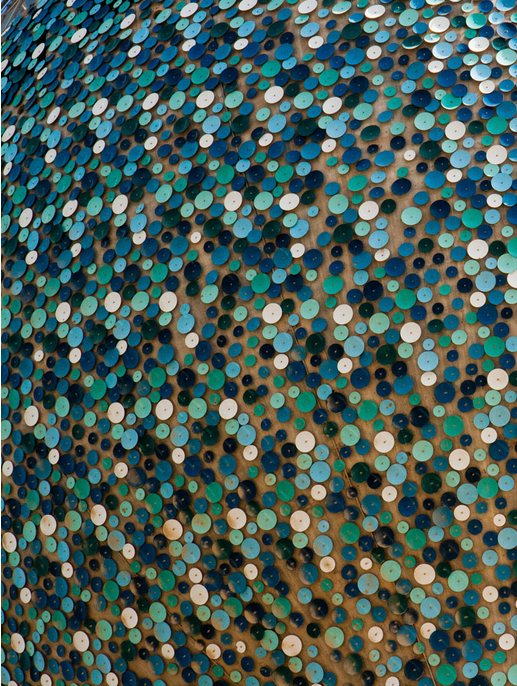 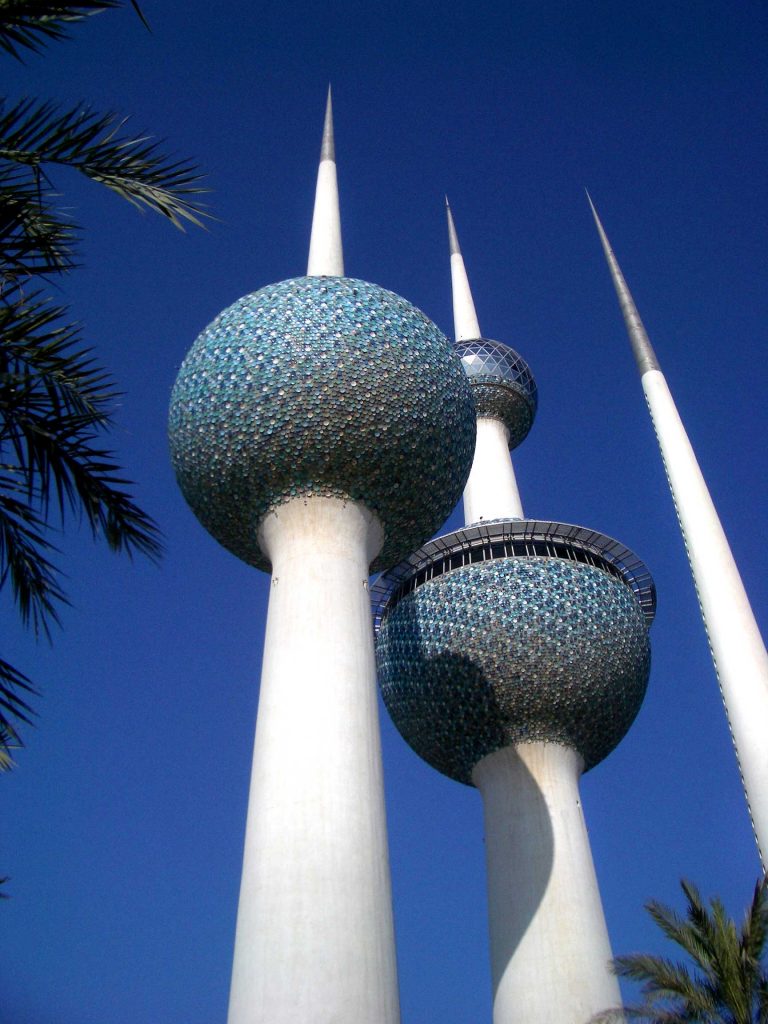 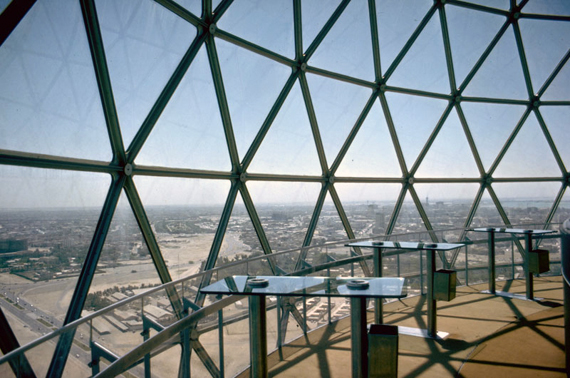 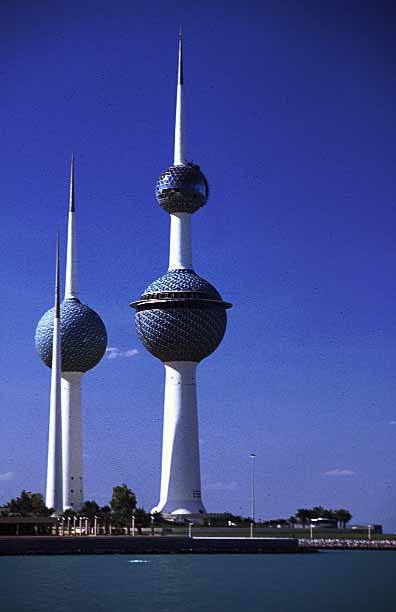 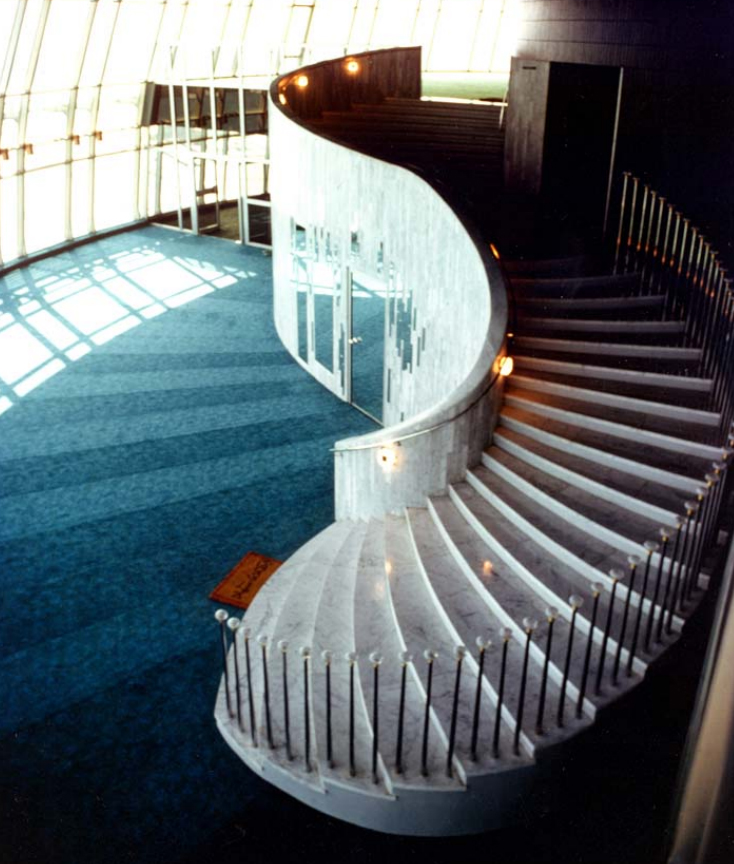