Being one of the main cities in Austria since medieval times, Graz has a wealth of ancient architecture, which has been maintained even through wars. The city center is the world’s cultural heritage since 1999. In 2003, Graz was chosen by the European Union as the Cultural Capital of Europe. The purpose of this title which is awarded annually, is to promote projects that could improve the cultural infrastructure of a city.

While it had already decided to build a contemporary art museum in Graz, why it had become competitions in 1988 and 1998, was never performed. In 2000 he conducted a third contest in which elected the current design of London architects Peter Cook and Colin Fournier. Since then, the Kunsthaus has become an architectural landmark in Graz.

The designers of the project, have created an impressive synthesis that unites its innovative architectural language with an urban environment and an old historic building. The aesthetic dialogue between the new structure biomórfica the Kunsthaus and the Clock Tower Schloßberg del Castillo is the new flagship of the city and represents the transformation of the city to a new era, but without forgetting its past. The building contrasts sharply with the surrounding roofs of houses of two water red tiles, characteristics of Graz.

Its unusual shape is radically different from the conventional exhibition spaces. The giant caterpillar or artificial, as its creators call it, the “Friendly Alien” has become a symbol of the current high tech.

The Kunsthaus was conceived as a space devoted to temporary exhibitions of contemporary art. It does not work as a museum, since it has no acquis and performs research.

It is located on the right bank of the river Mur, in the streets and Lenkai Südtiroler Platz, insert in the urban landscape of the historic city of Graz.

In the solar neighbor, is the former House of Austria, considered a historical monument as the oldest building made of cast iron in Europe.

The building itself is the subject of exhibition.

It has an exotic form, with remnants of animal form that could resemble a caterpillar lying upwards, balloon or bubble. The plant is shaped like a liver.

The volume produces an effect of weightlessness to be suspended on the ground floor with a wall of glass that lets see how that continues in the interior.

At the top of the deck, 16 jets heighten the profile of the building.

The outer skin that defines the shape of the building, is mediated to change color and appearance.

With 23 meters in height is divided into four floors.

In the interior there are five different exhibition spaces, offices, library, cafeteria, board rooms and meeting places and rest.

The nozzles are designed to provide natural light to the top level galleries. One of the jets also works as a security measure against fire, smoke for the exit. Another of them is a viewpoint towards the Clock Tower, an important monument of the city.

In the upper floors, some bridges connecting the new structure with the former House of Austria. The two buildings form a single unit.

The building is fully equipped with ventilation and air conditioning necessary for the conservation of artworks and the environment at a time.

The skeleton of the building consists of 225 tonnes of steel, on which were placed over a thousand panels methacrylate, cast electronically, up to 2 x 3 meters, which give it its characteristic texture to the building.

The outer skin is a work platform for art projects, the dialogue between the media and the space theme. This is an urban screen on the facade oriented to the river and the city center, which serves as a vehicle for artistic productions on which to translate text and images as part of interventions electronic art. 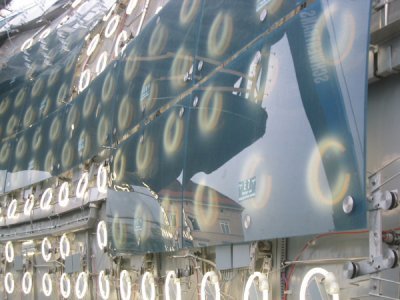 Below the external skin of acrylic, is the facade BIX which consists of the installation of 925 circular 40W fluorescent tubes. Each ring of light acts as a pixel.

Each of the individual pixels of the matrix is a conventional fluorescent lamp with 40W and a diameter of 40 centimeters. The decision to use this design exemplifies the character of the asymmetrical design of the concept of BIX.

The “resolution” of the matrix is extremely low. There are only 930 pixels (0.2% of a conventional television screen), plus black and white. Despite the severe constraints imposed by this resolution, however allows a huge share of the facility and is much cheaper than that of a conventional video screen. (With the same budget would have covered an area a hundred times smaller).

Beneath the surface acrylic displays an array of 930 rings of light that covers an area of approximately 20 meters high and 40 wide. Individually adjusting the brightness of each lamp, with a frequency of 18 frames per second, each acting like a pixel.