Creating meeting places is an important development task in Chalmers University of Technology, one of those places is the space designed by architect Gert Wingårdh, a round five-story building that resembles a gear. Construction began in 2009 and was completed in March 2011. Called Kuggen (Tooth) it is a center for formal and informal meetings between the community and the society that has been awarded MIPIM sustainability in addition to being nominated for IABSE Award for Outstanding Structure.

The new Kuggen building is built on Lindholm Platsen, Gothenburg, Västra Götaland, Sweden, nestled amidst large office buildings in the University Campus, a research center and numerous technology companies located in the old wharf. Gothenburg on the west coast, at the mouth of the river Göta älv is the second largest city of Sweden.

The form and color are not revealed immediately, the circular building has different aspects, depending on the direction and time of day that is observed. The upper floors are projected onto the lower, more on the south side, so that the building partially shade gives himself when the sun is high. Tall plants in turn are shaded by a rotating screen, these are details that change the character of the building on either side and in the course of the day.

Designed to connect with their environment, Kuggen consists in optimal and repeated units for offices.
From the spine to the north, the building was extended with two occupational units per floor. A moving screen with photovoltaic cells around the building adds shade and electricity.

Circular in plan, the skewed shape is influenced by the jagged edge of a leaf, with a three-dimensional displacement in treating facade. It could also be associated with a toothed disc cutter circular machine.

This consists of repetitive cutting levels on flights from windows, each floor is slightly shifted off center to the south, thus providing shade the ground beneath it. This expansion of 1500mm per plan generally gives the building an aspect of movement and dynamism.

On the second floor there is a walkway that leads to a direction Lindholmspiren buildings and other building Jupiter Campus Lindholmen. The building grows outward the more you climb, and houses facilities for business and research.

The distinctive cylindrical shape of the building and its location in the center of the square remind an urban planning with roots in the Italian Renaissance. In this case also serves to make it easier to use a place often windswept and temperatures.
Despite its calming effect on the microclimate, the building livens up the place with a dramatic form that only gets stronger from close range. As the viewer approaches the triangular windows forms emerge. Its design has less to do with the appearance that the function limitation of the glass to a quarter of the surface of the wall surface maintain the heat inside while the triangle shaped openings allow the entrance of light to where needed, near the roof, from where you can reach and cross the core of the building.

Kuggen is characterized as a building energy efficient offices. His round floor offers a large usable area and triangular openings on the façade provide daylight and views, both private offices and open plant
The projection of the upper floors limits the annoying direct sunlight glare inside, and also extends the useful area.

Kuggen is a building offering 192 bays. This results in 192 units suitable for open space office, flexible spaces. Users are scientist working within Chalmers University of Technology in their new firms.

The building is designed with the idea of promoting opportunities for informal meetings. The lower floors house a Science Park, where students can meet with representatives of the business community.

The second level is also designed for public use, with its circulation spaces that provide the strongest interaction between building occupants and visitors and can even be used as exhibition spaces.

The upper floors have a general use as rental offices under the administration of Chalmers University. The building has only one elevator, so the stairs are the main means of vertical circulation, promoting contact between people, in addition to providing their daily exercise level.

The structure makes use of green building technology on several different levels, ventilation, interactive systems for cooling and heating and effective use of natural light. It was built with reinforced concrete, and coated with a shell of prefabricated elements with high thermal capacity. By equipping the building with motion-activated, lighting and ventilation of the energy is used only when clearly needed.

In cellular offices mechanical systems are hidden between the concrete slab and suspended sealed ceiling, in open office spaces roof systems are exposed, so it is easy to change the design of these areas. Building two bays per plant increased by increasing the diameter of the plants as it rises.

The main software used in the design has been for AutoCAD and 3DSMAX 3D representations, rendering with V-ray.

Triangular windows maximize the use of daylight into the core of the building and minimize climatic deficiencies. Office units also benefit as they move around the windows of the building across the way. The dimensions of the openings are for both lighting in offices, as to enjoy the open landscape. This solution limits energy consumption to 53 kWh / m per year.

On the roof, solar collectors for heating drinking water round the solar system. The “art” solutions designed to adapt systems of ventilation, lighting, heating and cooling systems minimize the environmental impact of the building and become a colorful reference point inside the gray surroundings of the buildings that surround it.

The bold reds that has finished building it a bold presence there. One, composed of a mesh-like system of photovoltaic cells, high swivel screen provides extra shade on the upper floors, as well as electricity as it moves around on the outer perimeter around the building, following the sun’s path.

Finally, her brocade glazed terracotta panels takes on different appearances depending on our viewing angle and changing daylight conditions. Their colors include six shades of red and green.

The choice of ceramic panels for the facade is related to the perspective of resource conservation in the selection of materials. Ceramic bread has a hard time to beat, made with the same technique found in ceramics 4000 years ago that still retain their original luster.

In the indoor carpet is glued directly to the floor, benefiting from its thermal mass. The result is a building with an estimated power consumption of less than 55 kWh / m2 per year including all mechanical systems. 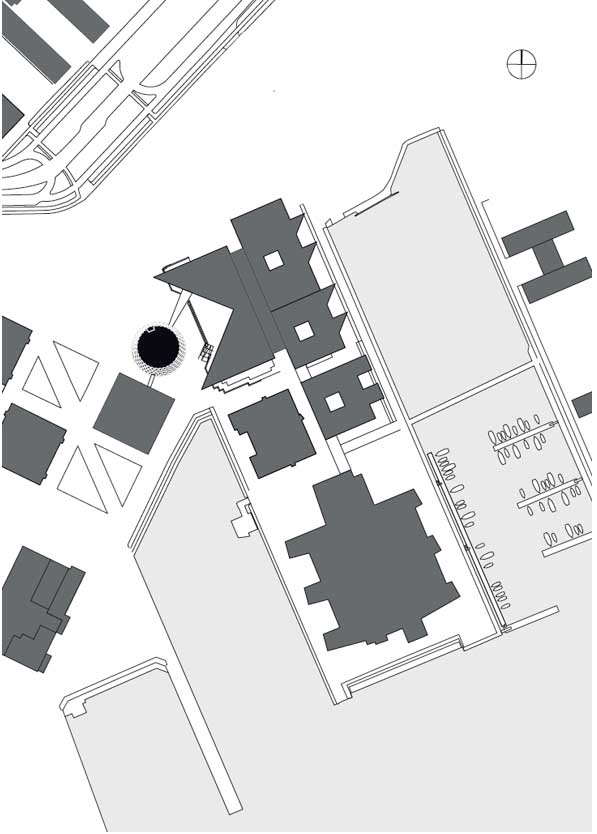 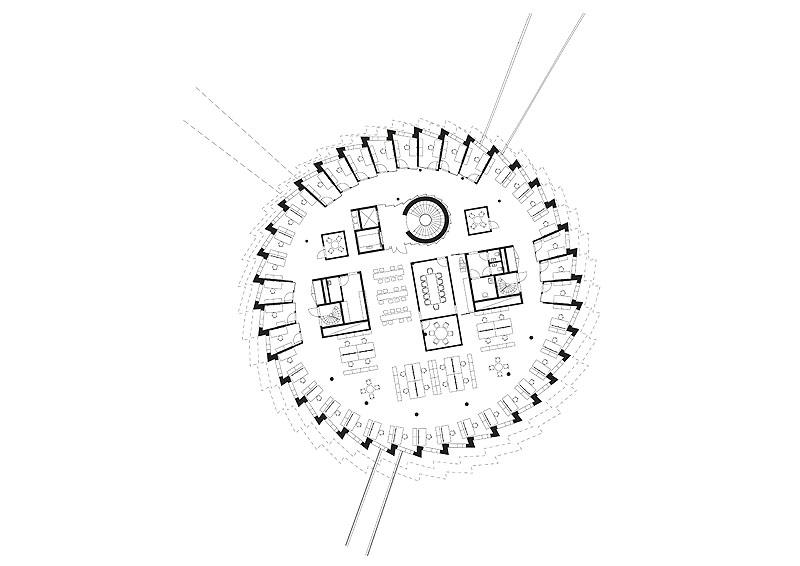 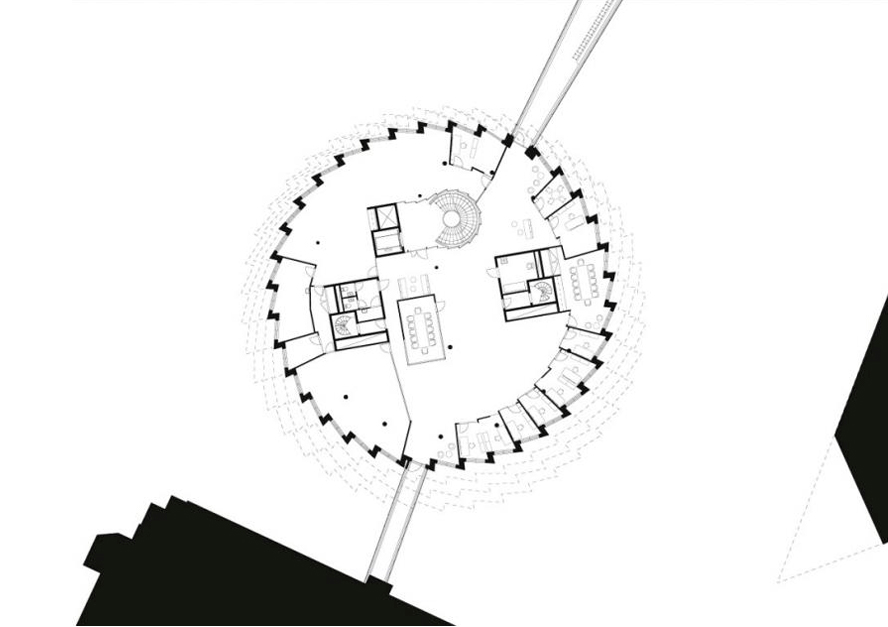 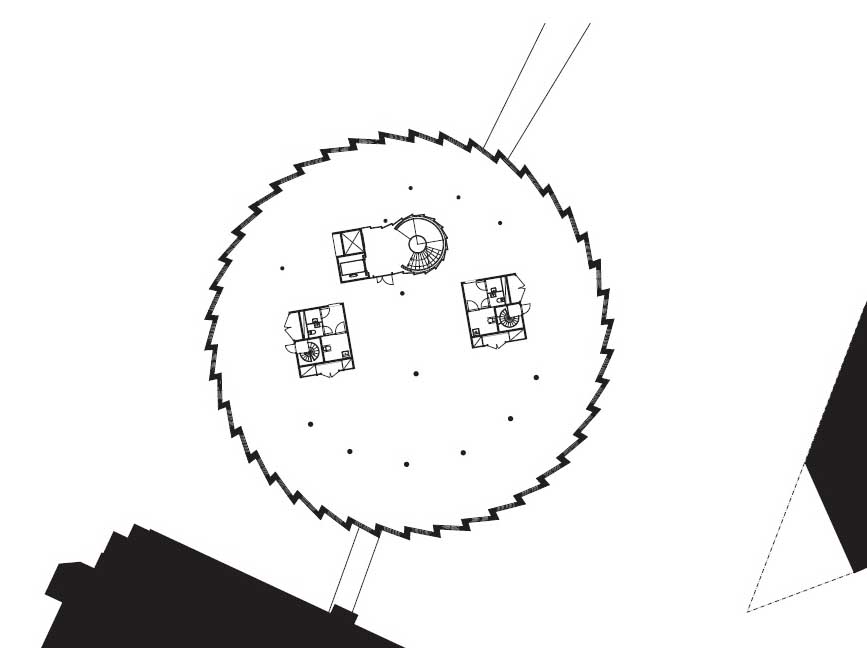 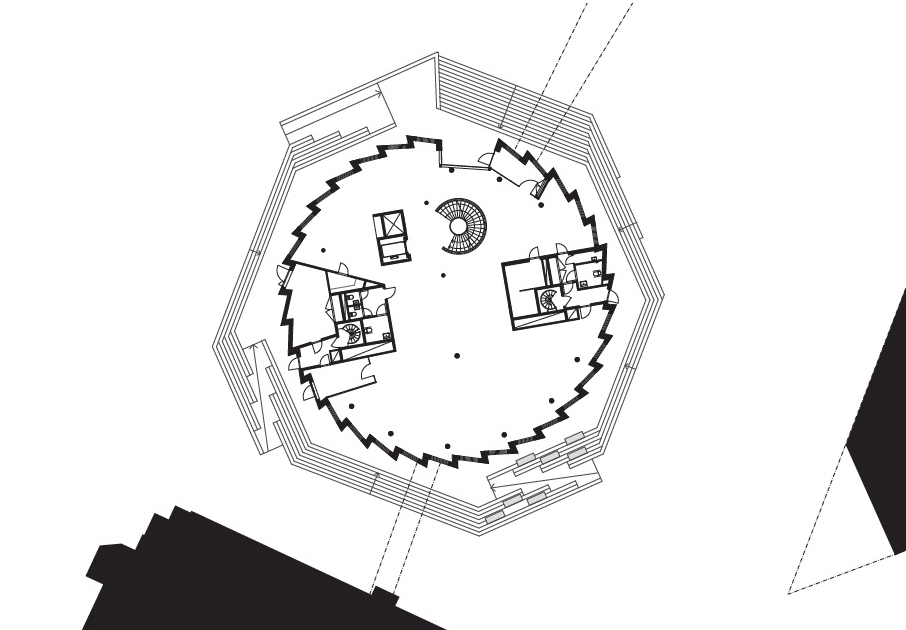 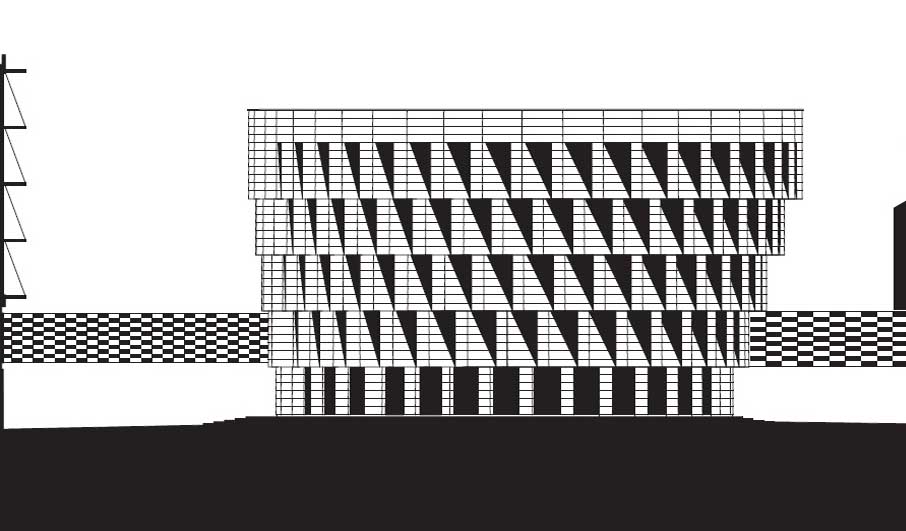 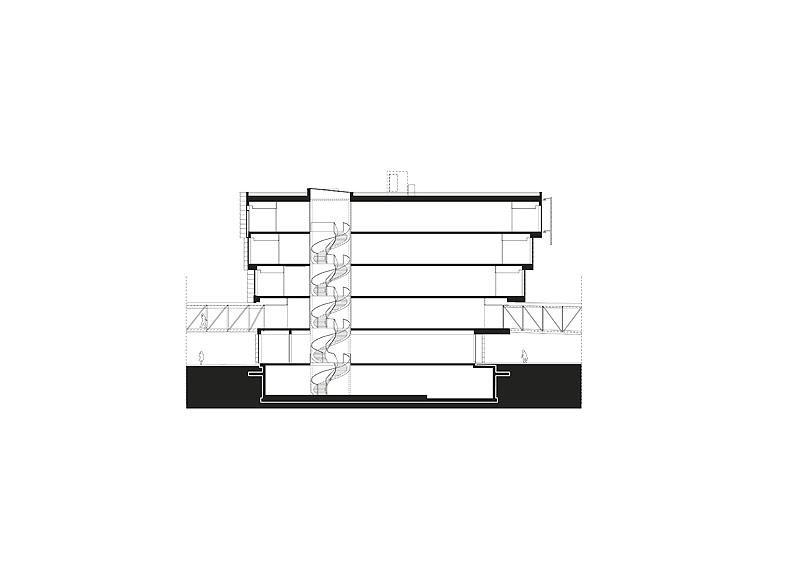 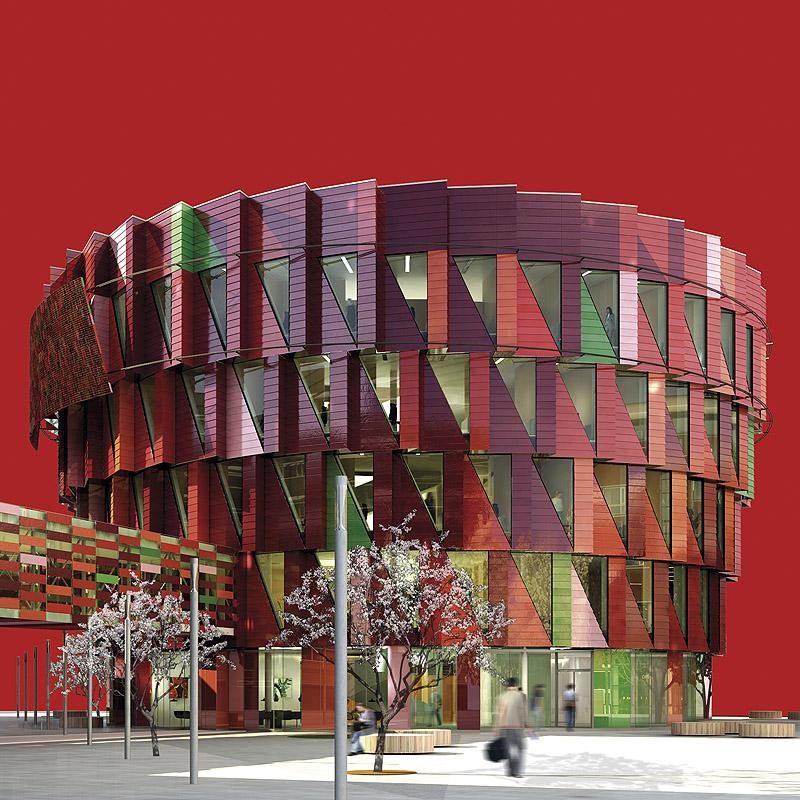 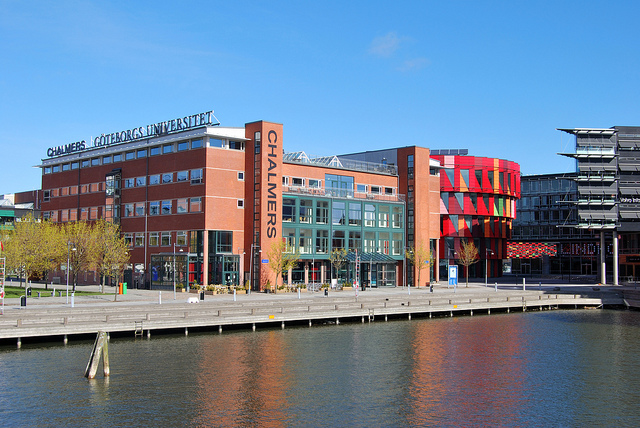 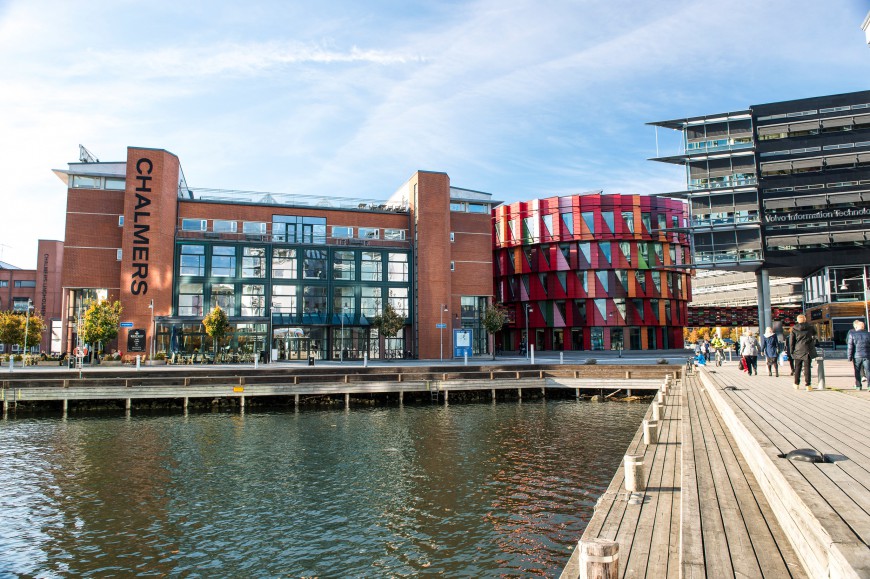 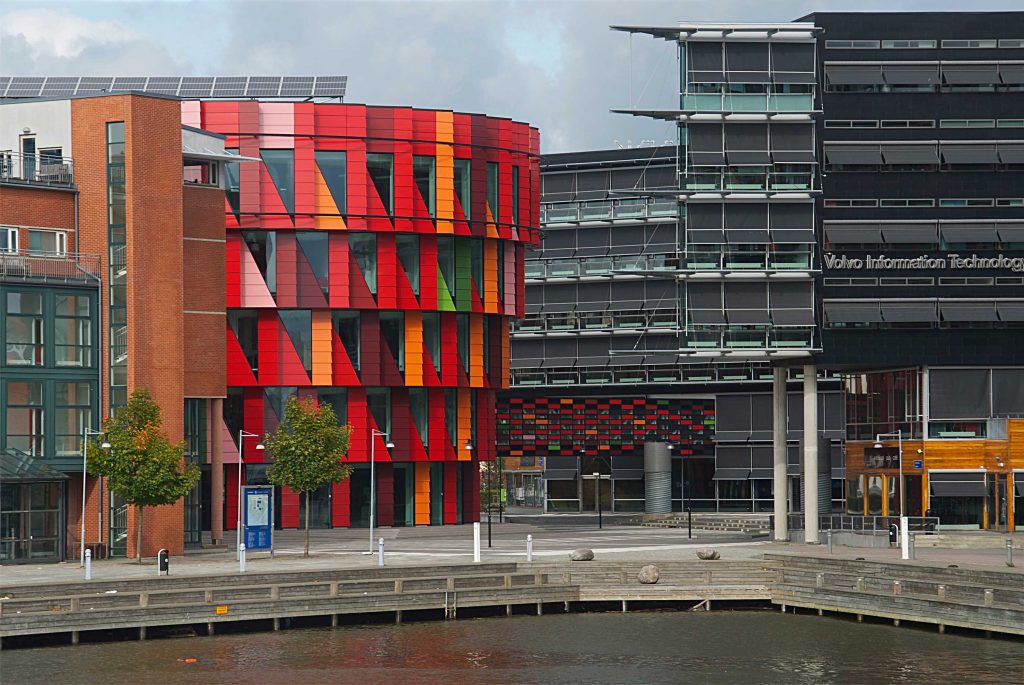 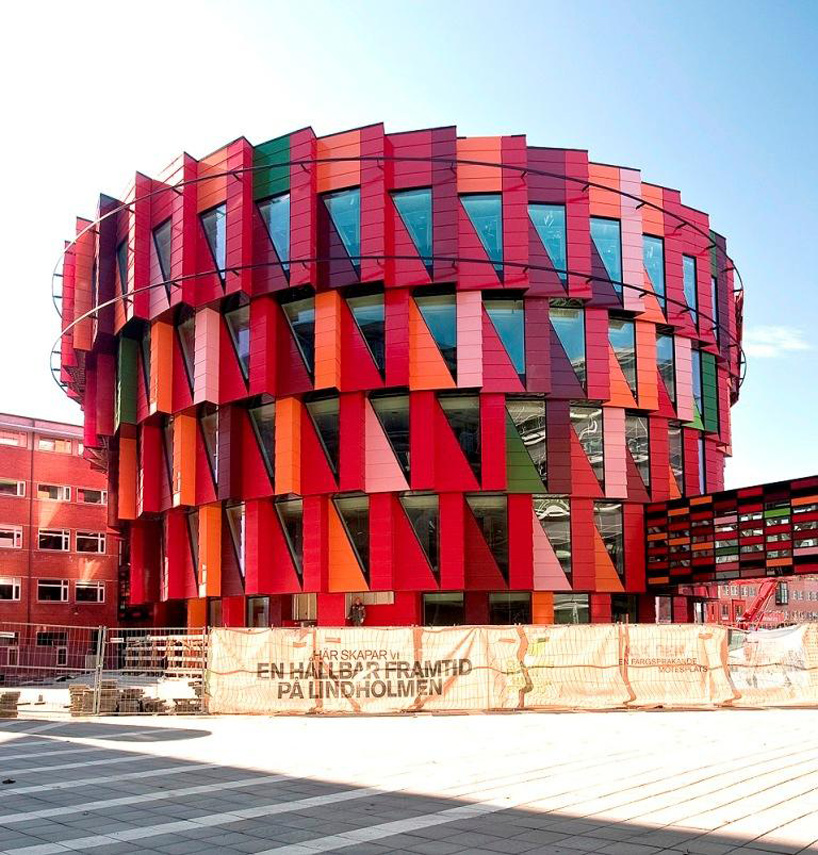 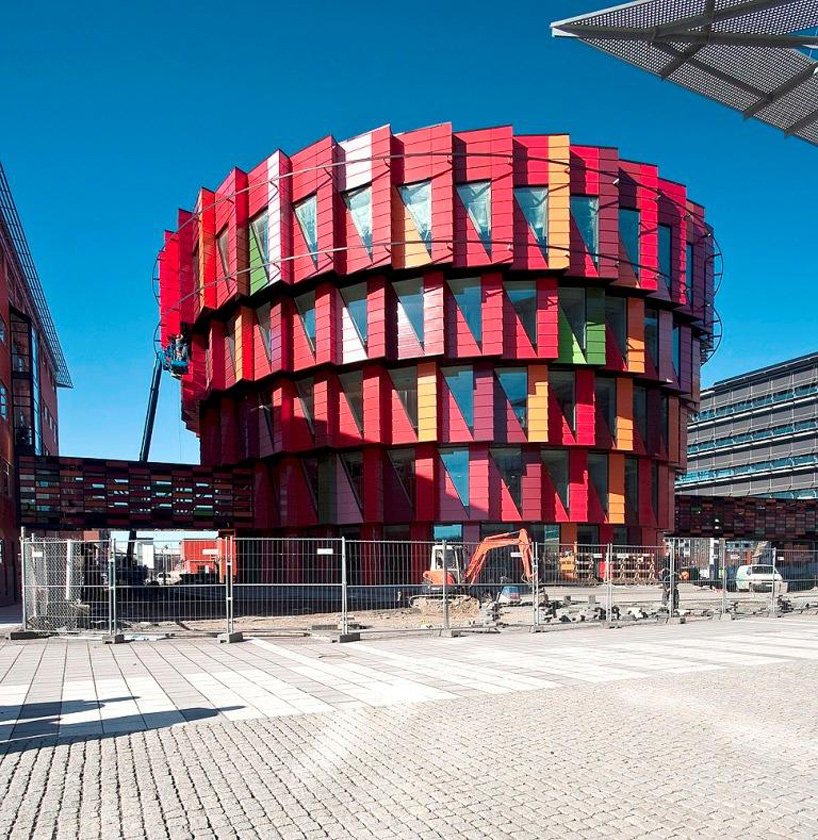 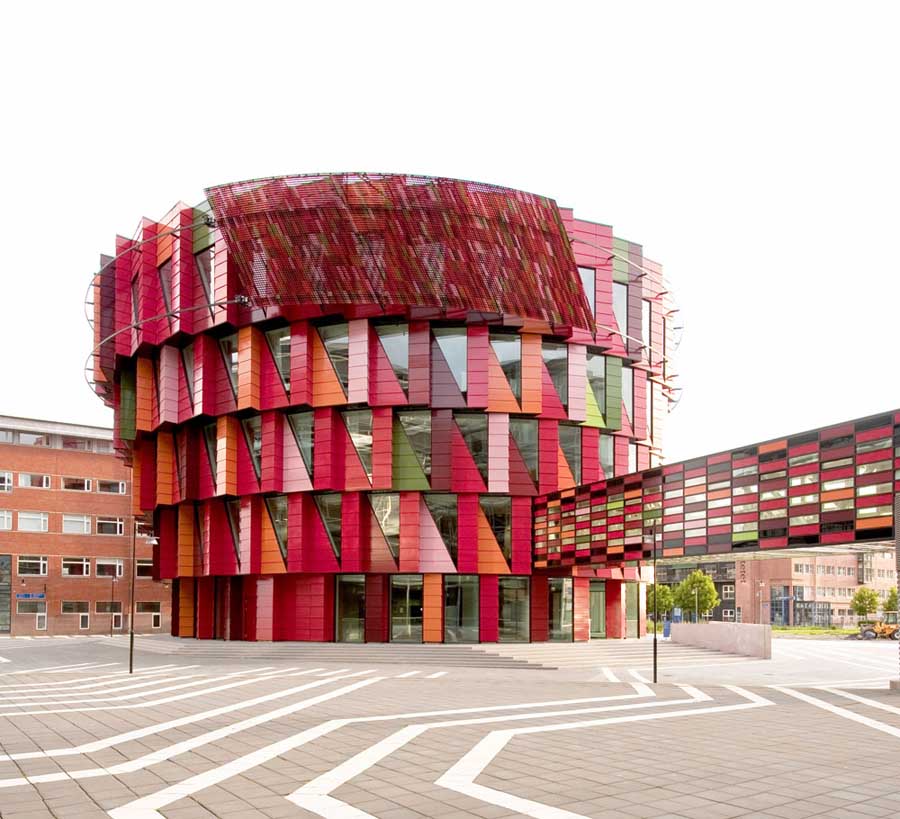 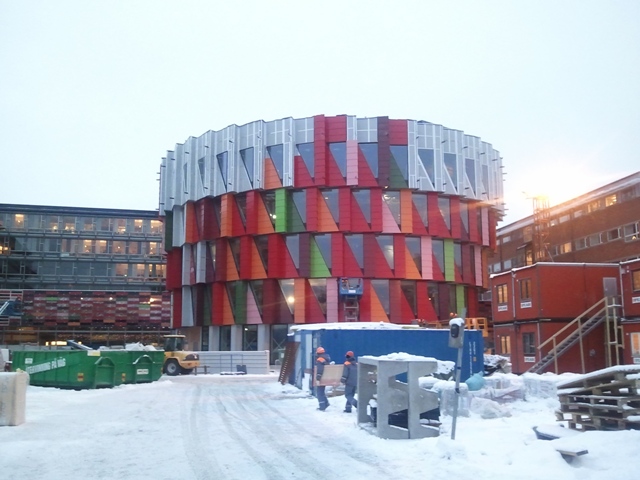 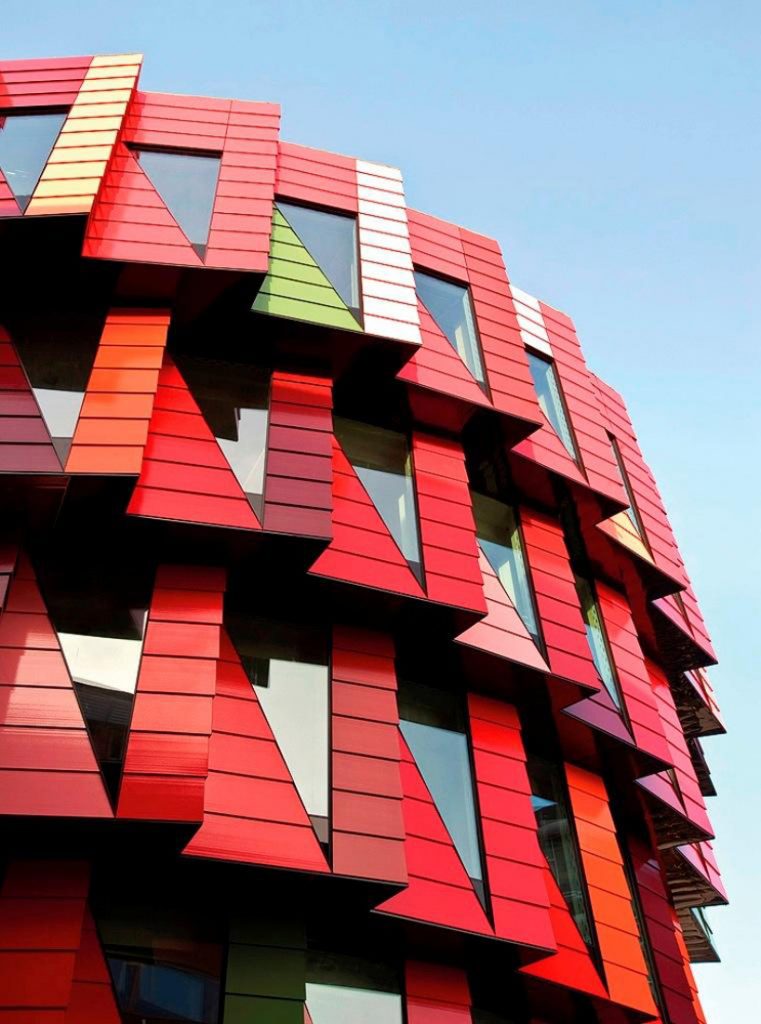 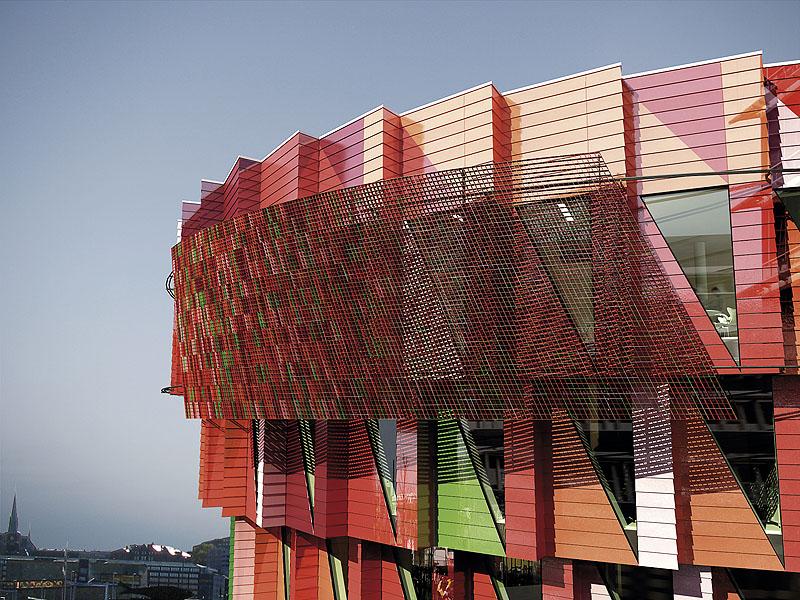 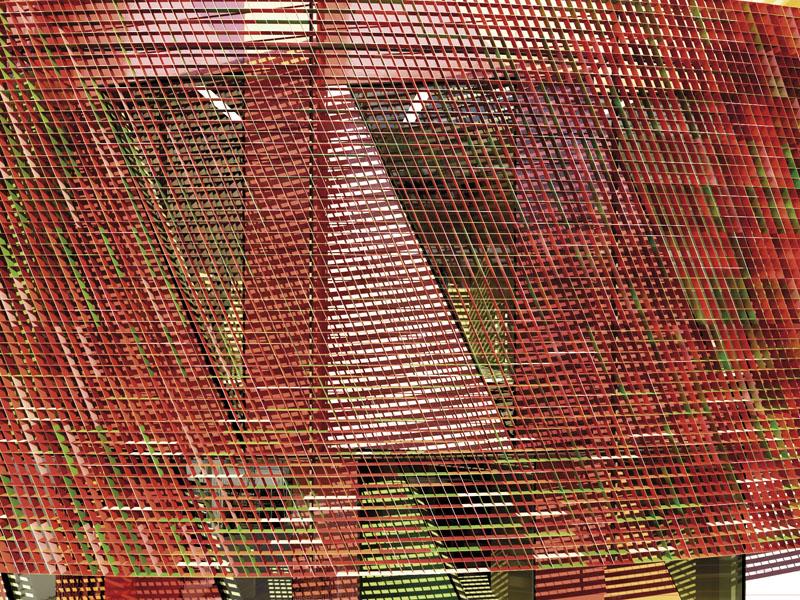 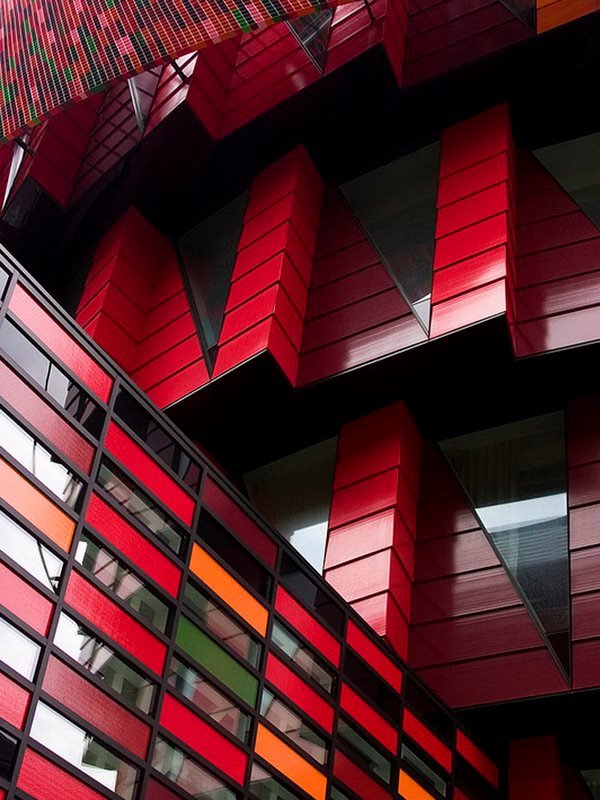 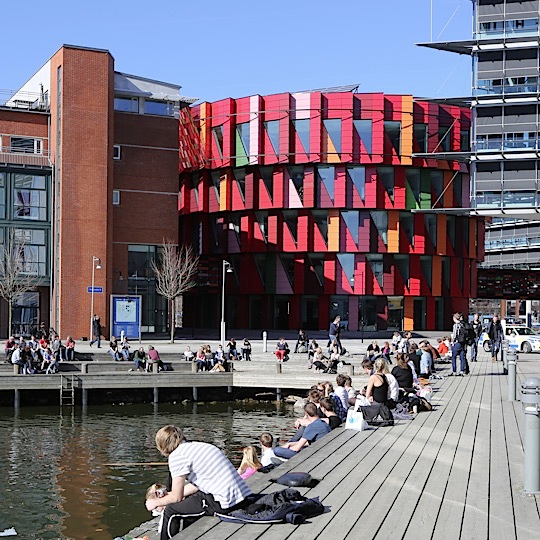 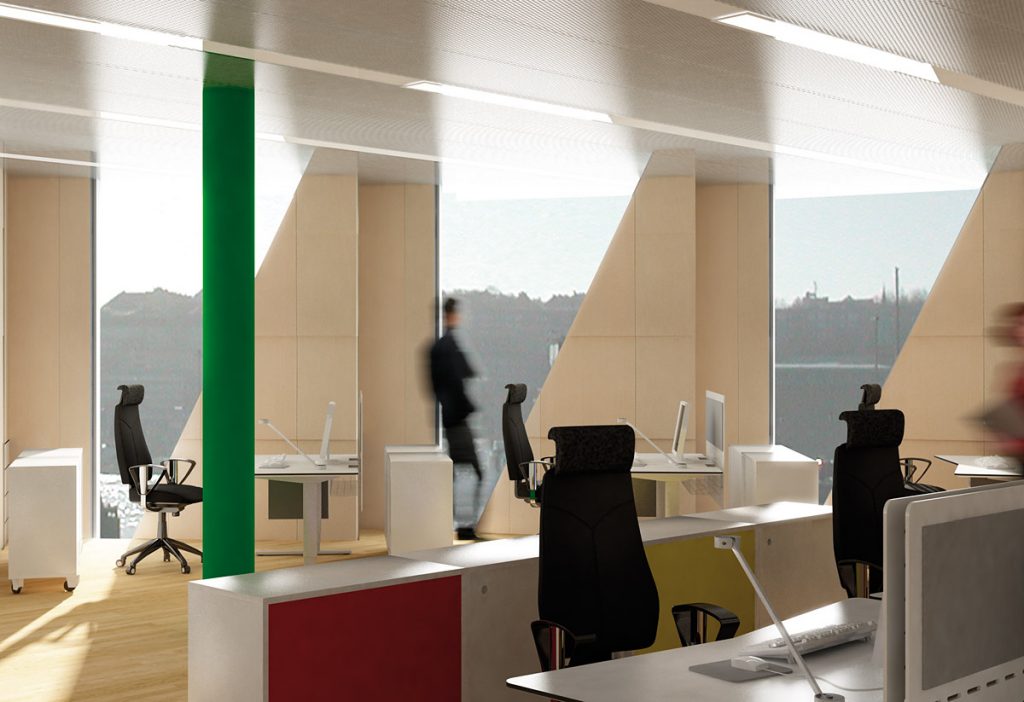 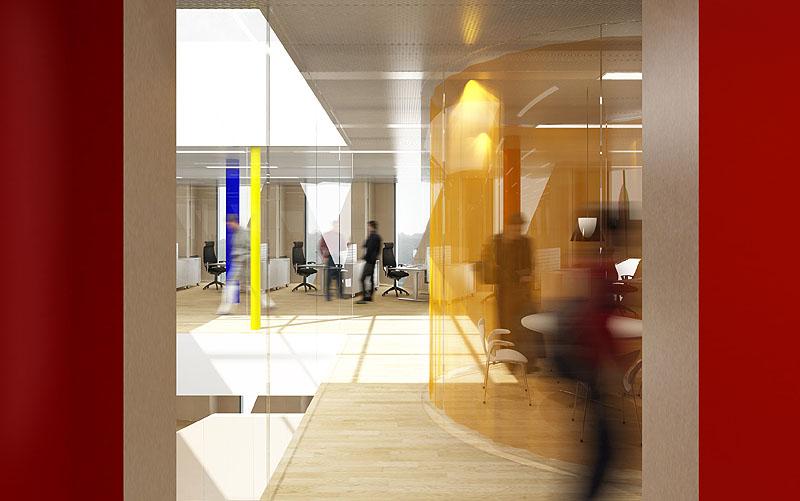 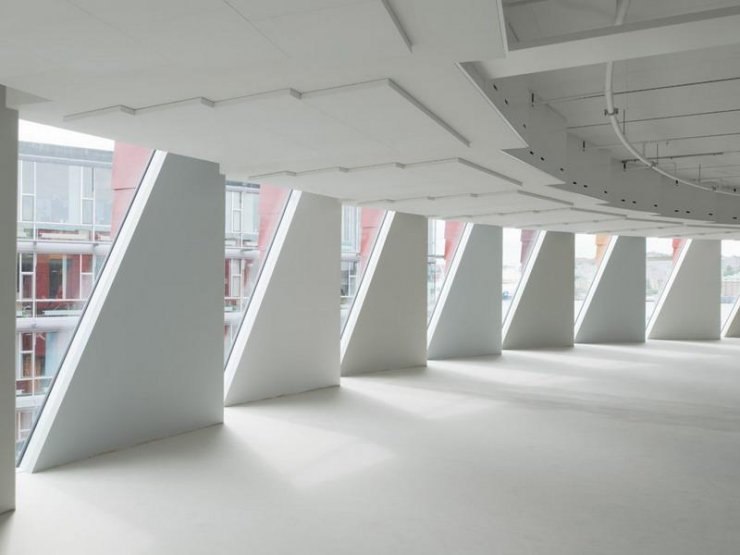 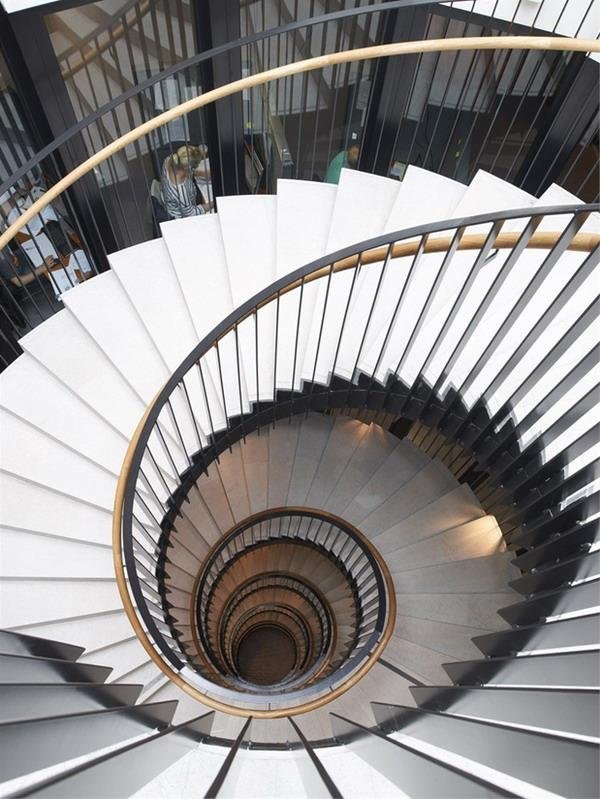 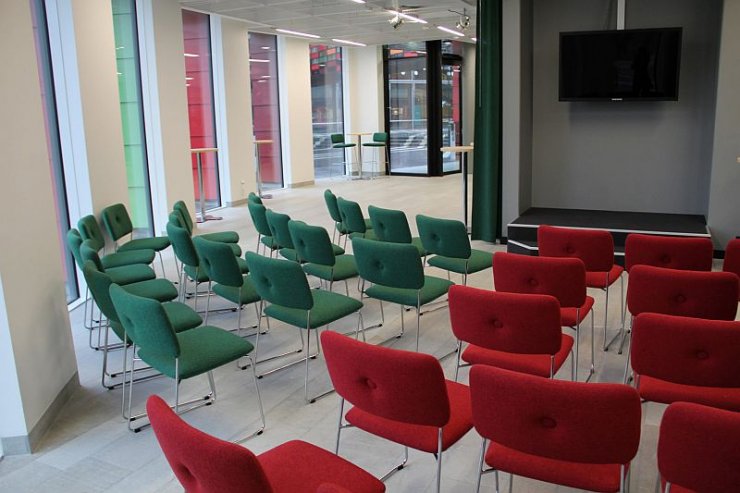 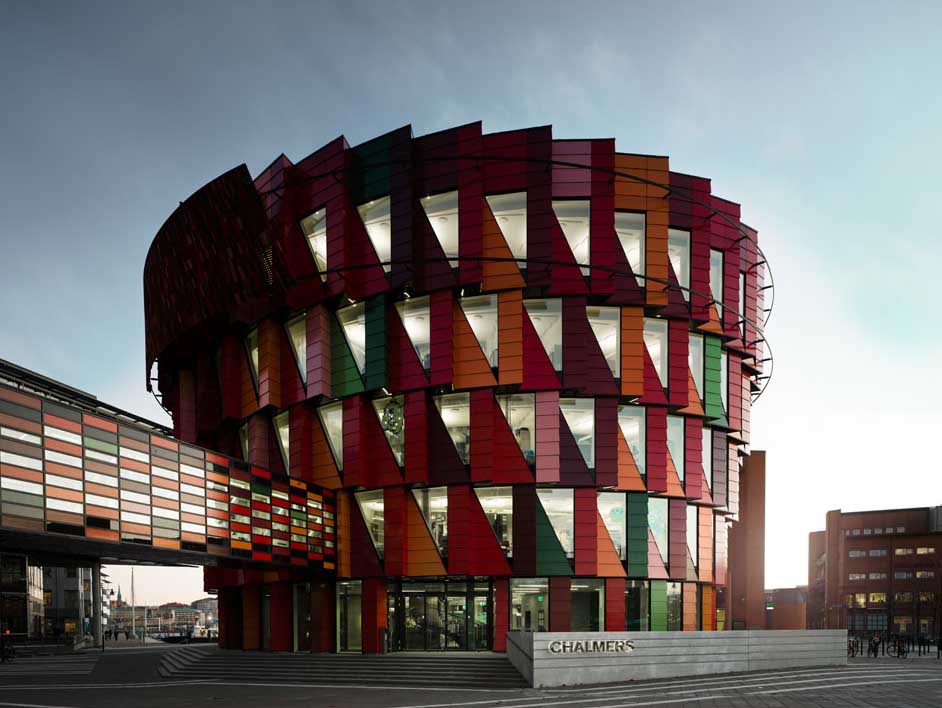 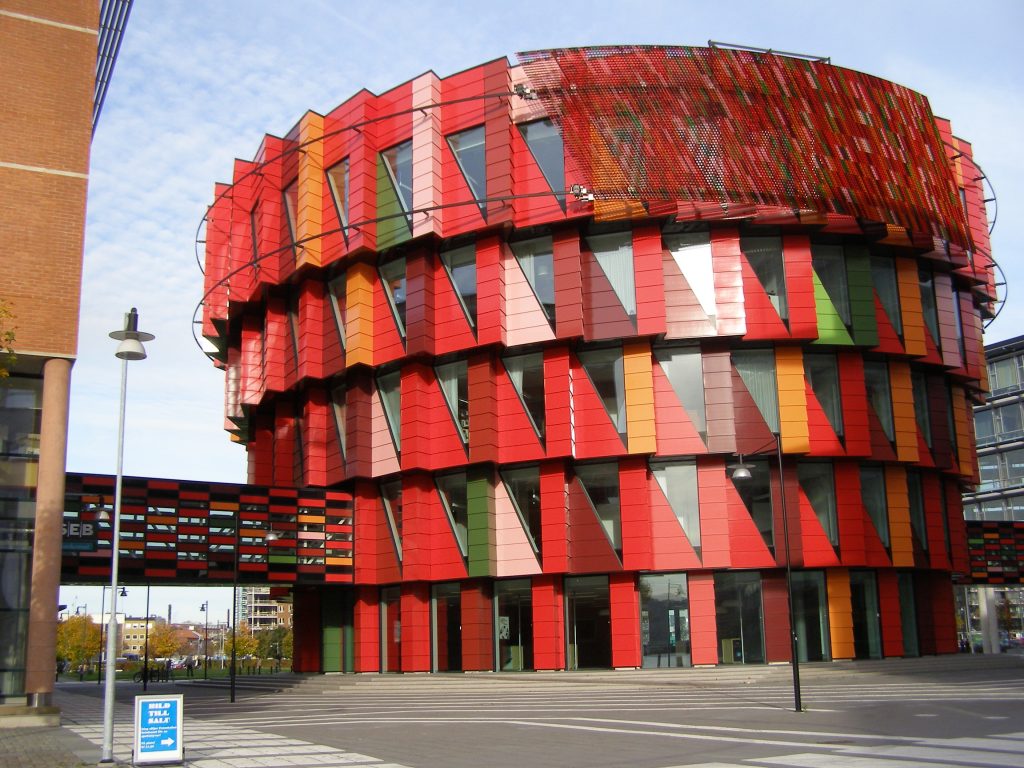 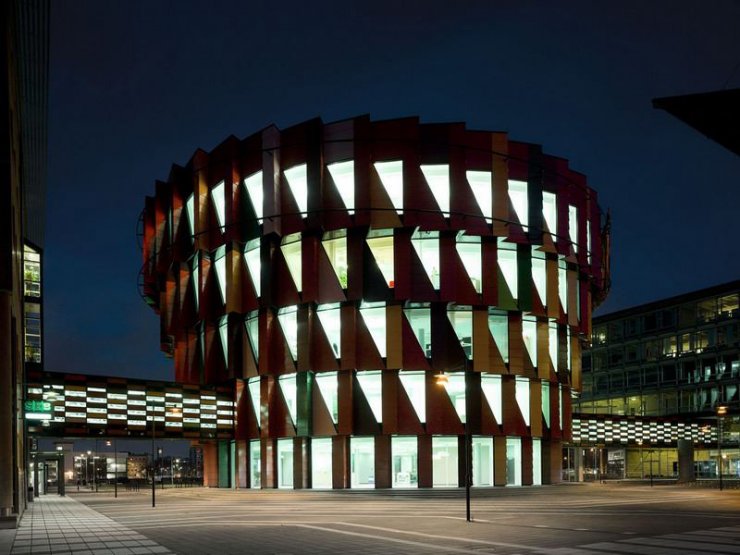 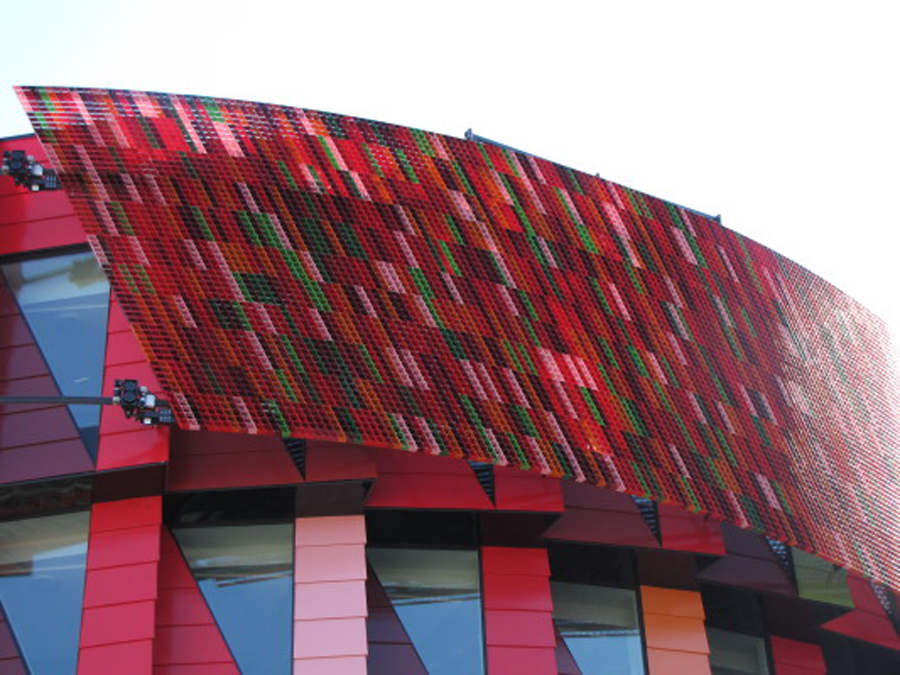