In the late nineteenth century European bourgeoisie prompted by relative prosperity and a new mobility became fashionable Recreation or vacation periods in the field, escaping the bustle of big cities like London, Berlin, Paris or Vienna. They built large and luxurious hotels in the Alps, in Switzerland and Austria, which were affectionately called “House” (home) by the Swiss and residences particular in rural areas, the German-speaking countries called “Sommerfrische” (summer break).

Adolf Loos was aware of this phenomenon through his travels and in 1913 designed a hotel in Semmering, pre-Alpine region of Lower Austria, south of Vienna. In 1928, the architect designed together with his collaborator Heinrich Kulka cottage for food manufacturer Paul Kuhner in an area near Peyerbach, next to Semmering.

Khuner The Villa is part of his group of late works, along with the Villa Moller Vienna (1927-1928) and Villa Müller Prague (1928-1930). All have in common the application of the concept that places Raumplan stays at different levels and gives varying proportions depending on the use they will give.

Khuner died two years after the house was completed, and his widow emigrated to America in 1938. The house was sold in 1959 to a family that made restaurant and hotel.

The conversion of the lodge in a hotel has required some changes, such as additional bathrooms, but details of the house, and made room for the family members have been carefully preserved.

The house is about an hour and a half drive south-west of Vienna, in Kreuzberg 60, A-2650 Payerbach, in the area of ​​the lower Alps Semmering, Austria.

In the cottage Khuner, Loos reinterprets the architecture both in the choice of materials and structural treatment, nevertheless, aesthetically just outside the house apparently corresponds a traditional alpine style as it hides an interior room at different heights, characteristic of the concept of the architect Rauplan. Loos explores the possibilities of traditional construction materials based on promoting and introducing technical innovations in the pattern of rural construction, such as opening large windows on the lower floor, the sharp eaves of the roof or the material used in the roof.

The windows show their status and share a house that was designed from the inside out. This home is a clear example of “building on the landscape”. Although it is surrounded by forest and vegetation, manicured garden was designed by Grete Salzer.

In a land that rises 900 meters above sea level on a solid masonry rising two floors made of wood and built a loft under the roof with two slopes with straps covered with gently sloping eaves and coated with zinc plates. This completes the staircase and loft also has a shower.

On the attic and fourth floor mode, there is a small terrace, flat and independent, with a wide view of the surroundings. The beamed ceiling in this building has a supporting role really.

Loos uses large sash windows to create the illusion that there was no barrier between inside and outside, to what happened in the projects in the city.

The house is organized around a central double height living room English style: 12 meters deep by 6.50 wide and 4.50 high in which is located a rustic fireplace and dining in a side wing. The room is crowned by an upper gallery on three sides. This gallery is located at a height of 2.30 meters from the floor of the room leaving only 2.10 meters tall in it. On the fourth side, free gallery, a north window takes up almost the entire wall, a glass wall that becomes a “window box” offering spectacular views of the alpine meadows.

A double height window on another side lets in natural light and landscape. The bottom of this window could be opened up fully and as the sash windows giving the impression that there was no barrier between the inside and the outside. The terrace which is accessed, is three steps below the level of the room so it does not interfere with the view.

Some of the rooms as the guest bedroom, study and kitchen Owners are arranged in a U shape around the room and steps below it, or with a standard height of 2.60 meters.

The environments are tailored to each of the family members, with a large number of rooms for guests. On the first floor the many rooms are connected by a hallway.

The base of the house was built with rough masonry, characteristic of the region, and the upper floors were erected with timber logs. The gable roof was covered with sheets of zinc.

The shuttering of the gallery surrounding the hall were covered with oak and mirrored railings rods were originally painted red. In the rooms the forms were painted different colors.

The niche where the fireplace is located is surrounded by a stone wall and Loos designed two fixed side chairs, similar to those made in the cabinet Villa Müller or corner of the Villa Moller. 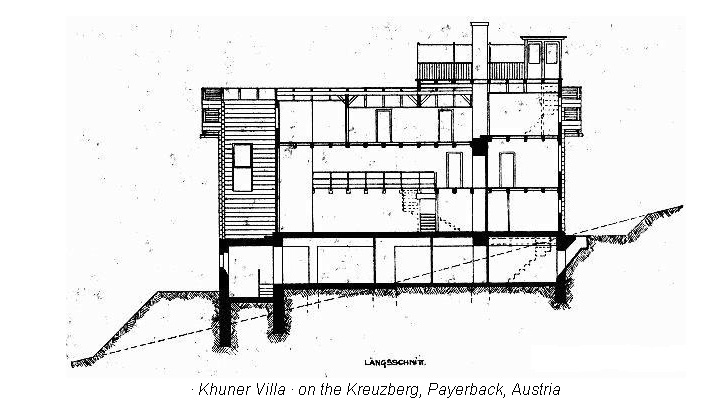 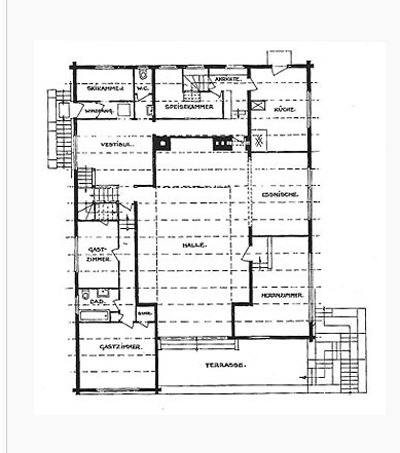 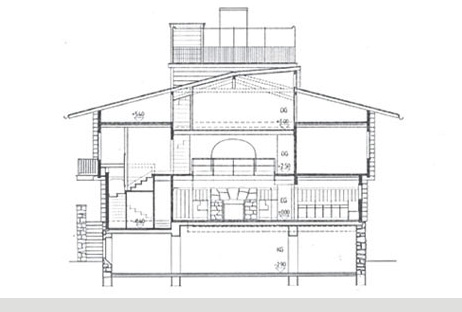 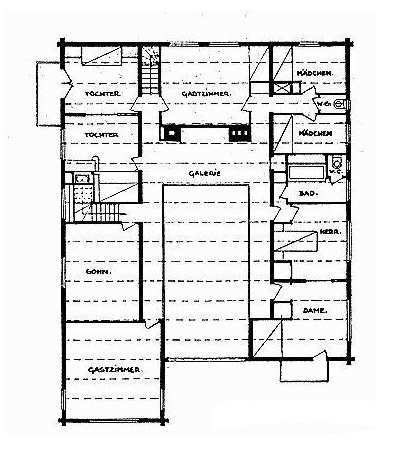 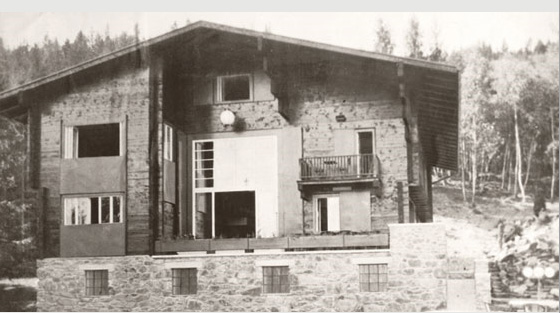 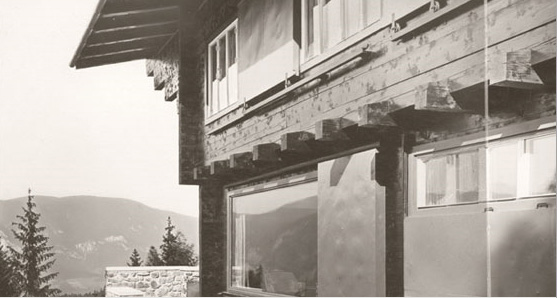 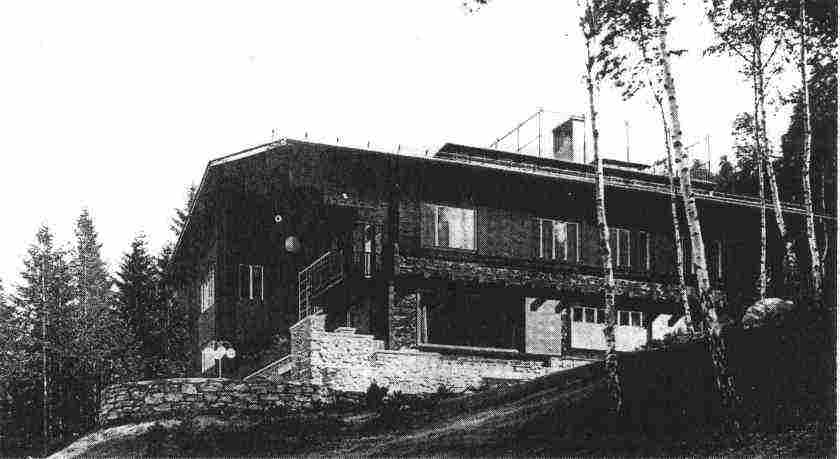 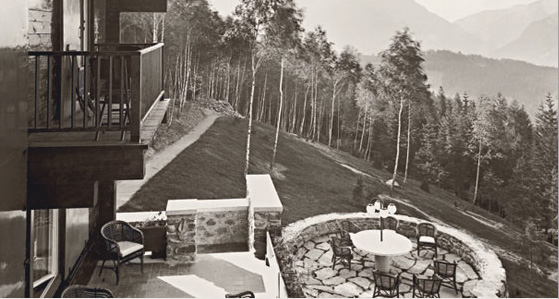 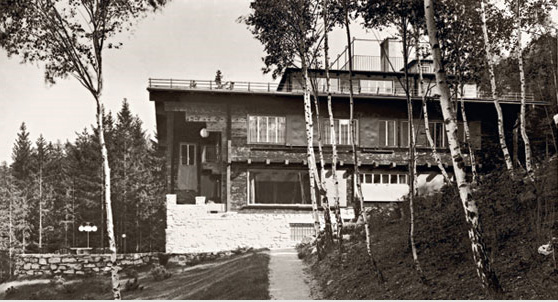 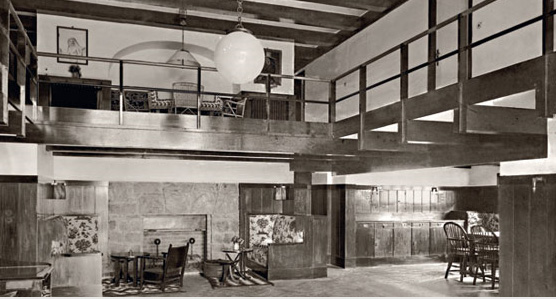 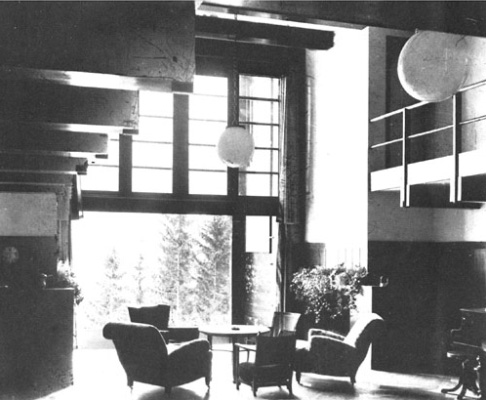 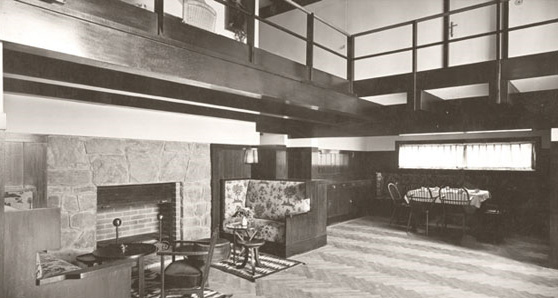 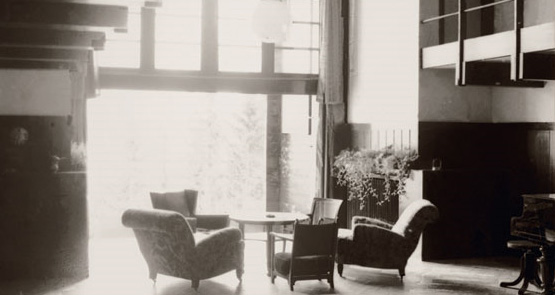 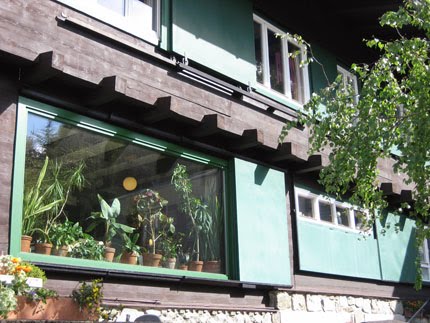 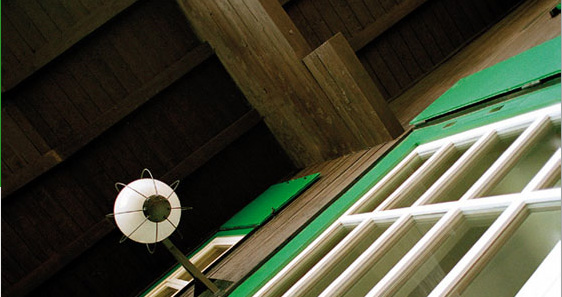 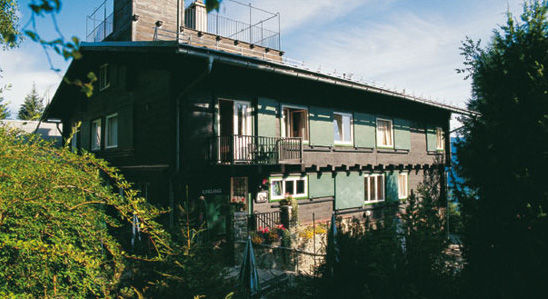 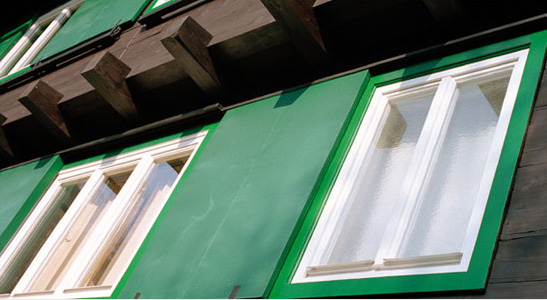 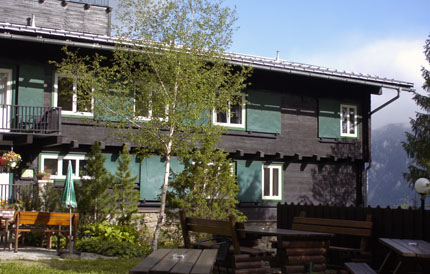 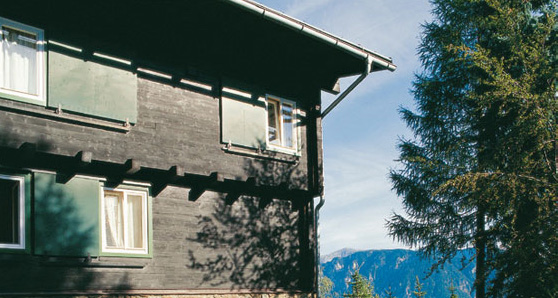 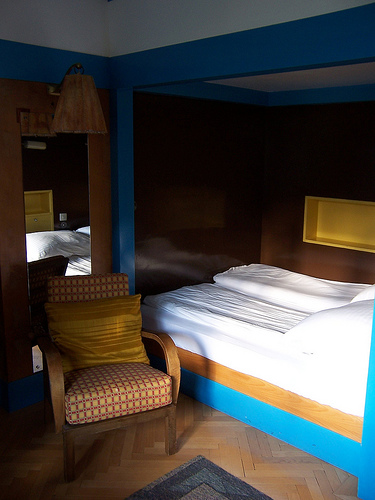 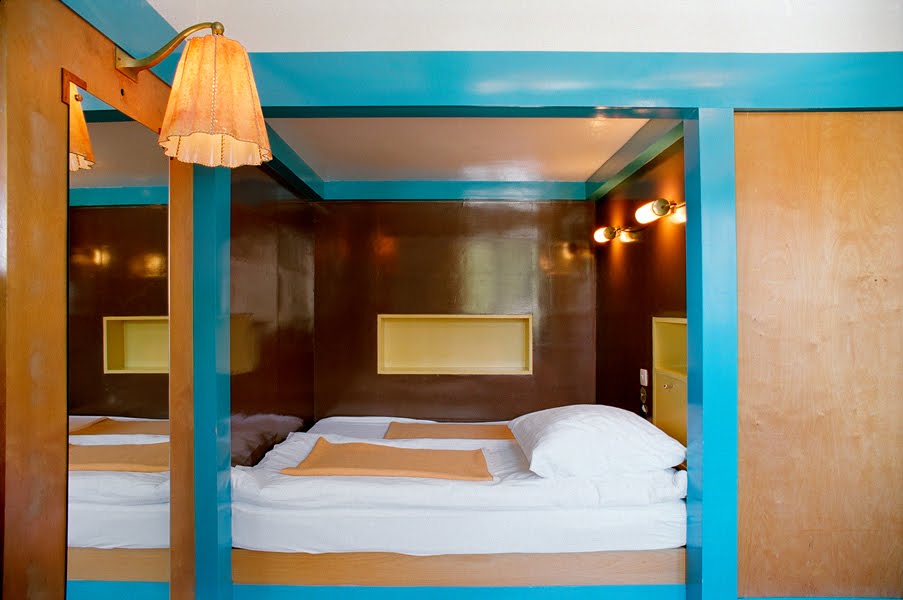 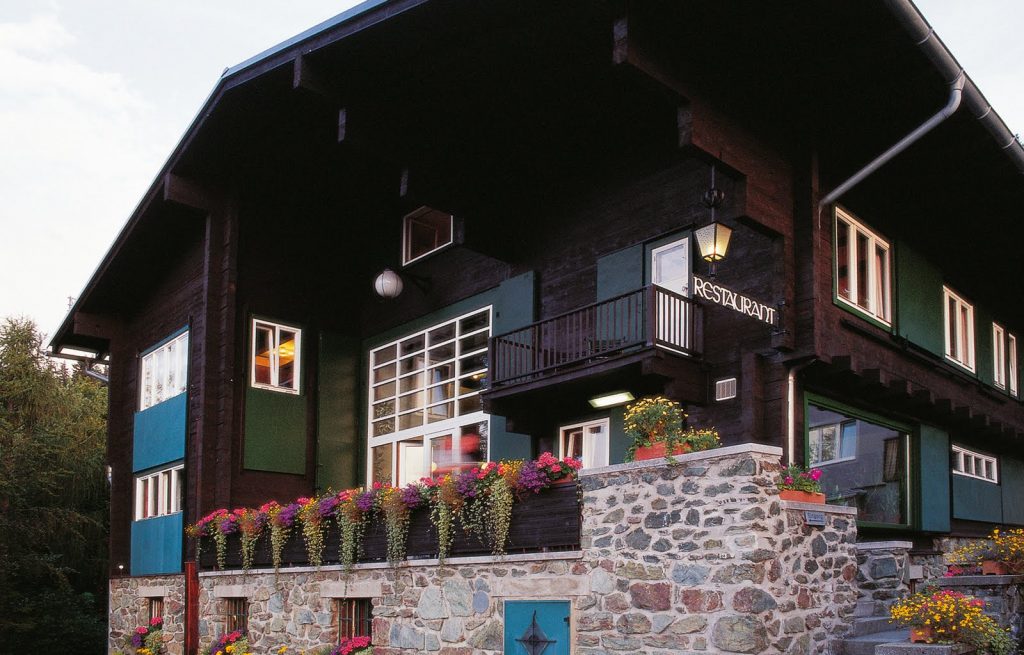 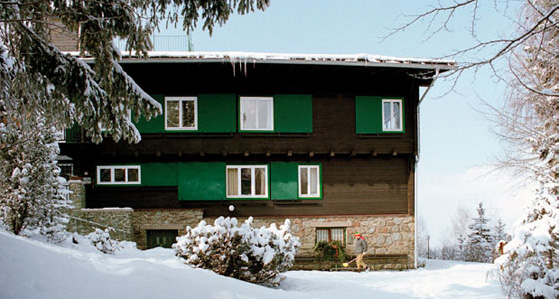