The Kazakhstan Central Concert Hall is a unique building both for its acoustics and for its architectural features. In its construction materials and sophisticated cutting edge technologies were used, combining music harmony with the wonders of nature, reflecting the attitude of the young and prosperous capital.

Manfredi Nicoletti describes his inspirations: “… the project is that of which lacks the place, its realization is possible. We going to Astana and flying over the Russian steppe, their salt lakes, its flat and desolate land, their carcasses petrified trees crabbed, we noticed the lack of a flower that opens in the heart of the city, and decided fill that absence… ”

The Central Concert Hall (Kazakh: “Қазақстан» Орталық концерт залы; Russian: Центральный концертный зал “Казахстан”) is a center for the performing arts in Astana, capital of Kazakhstan. Designed by architect Manfredi Nicoletti and Luca Nicoletti Studio Nicoletti Associati, was inaugurated by the President of Kazakhstan, Nursultan Nazarbayev, on the Day of Independence of the nation, on 15 December 2009. It is one of the largest auditoriums the world and is the result of a restricted competition

The auditorium was opened in Astana, new capital of Kazakhstan, based in the heart of the Russian steppe, four years after the country’s independence.
The core of Astana occupies a rectangular area whose organizational axis is based on a system of three squares. In most of them, dominated by the Presidential Placio, Auditorium faces the Senate building.

“The vastness of the place evokes a sense of the vastness of the territory,” said a spokesman for Manfredi Nicoletti. “Flying over the immensity of the arid steppe, we feel that it really lacked were the flowers. We decided to build the” Flower of the Steppe “.

“Amidst this monumental empty auditorium structures rise like the petals of a flower animated by music. They create a wrapper enclosing an internal square….This internal square multilevel integrates with the system Astana seats public, while providing a protected space of the hard local climate: a temperature that can range from -40 to + 40 ° with salt winds “the spokesman added.

In addition to the impressive entrance hall, the building has three rooms of different music. It also offers restaurants, shops and bars. 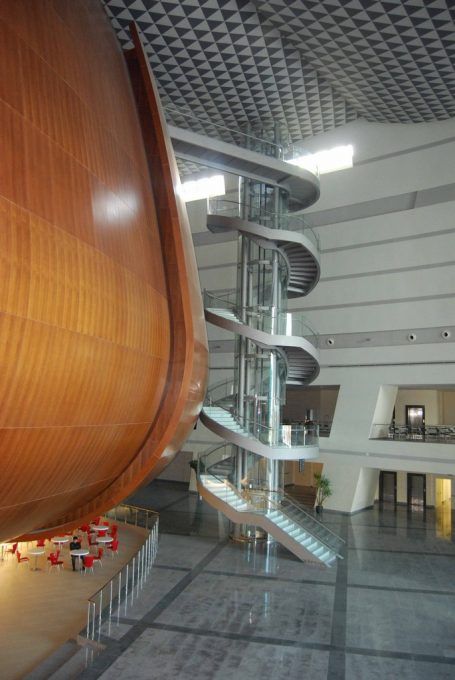 The building has a large entrance hall with 30 meters high and 2.970m2 surface, which aims to create an internal public square urban scale that can welcome Astana citizens throughout the year. Within this square are shops, terraces, restaurants, exhibition halls, two cinemas and auditorium with 3500 seats fully paneled inside and outside, and whose shape is inspired by the Kazakh traditional instrument, the “Dombra ‘.

A cantilevered staircase which rises in the floor of the hall leads to a round platform that offers high cafeteria. The foyer features a round glass elevator surrounded by a spiral staircase.

The main concert hall with capacity for 3,500 seated spectators and thanks to its acoustic flexibility is one of the largest of its kind capable of accommodating a variety of different events, from classical music to pop music, ballet and conferences.

The acoustic flexibility is achieved with a system of special wood shades combined with a particular design of ceiling called “black hole”, which absorbs most acoustic room reflections.

The two smaller rooms with capacity for 400 and 200 people respectively, have been designed with sufficient flexibility to accommodate chamber music and films and conferences. 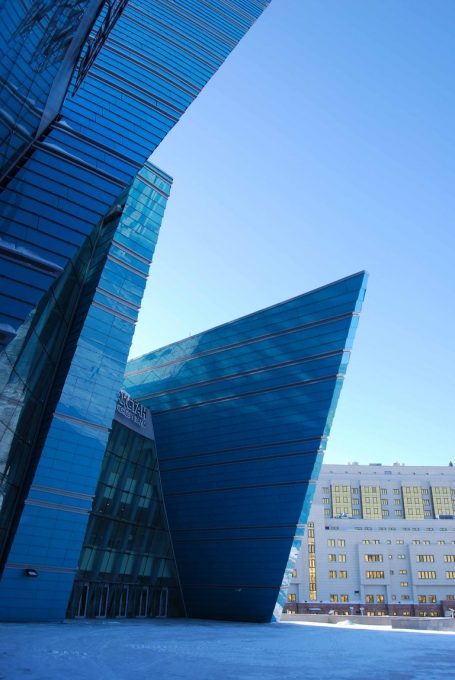 The external structure of the building consists of a series of curved walls and sloping concrete, coated with blue glass panels. They protect the internal functions of the building of the weather Astana.

Closure structures of the concert hall are composed system similar to candles spatial surface geometrically defined by a truncated cone with circular generatrix placed on a horizontal level and the edge, not belonging to the vertical line passing through the center of the circle. The structure was analyzed by a three-dimensional calculation of the candles on his complex, using a software LUSAS 13.6.

The imposing auditorium is suspended through the central axis of the building, similar to a “Dombra” Generally, typical string instrument Kazakhstan.

Concrete, steel, glass and wood are mainly used in its construction.

The main room is completely covered with black cherry wood. Their acoustic and movable roofs can regulate the volume and level of acoustic room, like reflection, using a sophisticated computer system, as the event is to take place.

The entrance hall with a glass facade, exposed wall and convex curve that shares with fully upholstered cherry main concert hall. In this great internal square round 3 panoramic elevators are located, with hydraulic machinery, a rated speed of 0.63M / s and a rated load of 630kg. Its curved glass doors are also

To resist the effect of erosion of salt winds from the steppes, the inclined surfaces of outdoor candles are coated with glass panels reflecting the environment.