A decade after Edgar Kaufmann hired Frank Lloyd Wright to design the famous Fallingwater House in Bear Run, PA, the same Kaufmann wanted to build a house on the West Coast.

Kauffman visited Taliesin West, the summer study of Wright, located in the middle of Arizona, but was not particularly impressed. He went to Richard Neutra, from whom he expected an equally brilliant project, but lighter, because Palm Springs was best known for its frivolity and lack of morality (no surprise that Wright was angry, because we had previously defined the work of Neutra as “minor and unconvincing”).

Since the 1920s, the city, situated at the foot of Mount San Jacinto, offered refuge to the stars of Hollywood. Albert Frey, patron of Le Corbusier, had built his house here in 1940 and in 1937 completed the tiny House of Millar Neutra. However, this lunar landscape, as Neutra called it, is dominated by the Desert Kaufmannn House, covering 300 square meters and costing $348,000, a great achievement of modern architecture, with the appearance of a great silver airplane that has landed on a green carpet and is held in place by a few meticuously placed stones.

• Neutra did dig the foundations and managed to leave just before they were ordered to halt construction as a result of shortages of materials during the war.

• Although both Fallingwater House and Kaufmann House shared the use of stone masonry and a floating weightless, Neutra emphasized his differences from the work of Wright, saying that his buildings “became, instead of grew,” he “inserted” the house before this gritty backdrop. It rested on the “foundations” which, together with the artwork and the artificial atmosphere, highlighted the time, the white light of the moon and the starry sky

• Kaufmann House, originally designed in 1946 by architect Richard Neutra, was built for the same client who commissioned Falling Water by Frank Lloyd Wright. After having been significantly amended by its successive owners, current owners of the residence decided to return it to its original state. The house, which originally had 297 m2 in area, had been expanded to nearly 474 m2. The architects removed the areas added and restored the house based on the famous photographs Julius Shulman did of the house in 1947. The architects decided to also return to the desert garden look it had in times of Neutra. In addition, they incorporated a discrete heating, air conditioning and ventilation system, and a new pavilion at the pool, known as the Harris Poll House.

This vacation home was designed to emphasize the desert landscape and its harsh climate.

The desert, or rather, this primordial wilderness area that stretches around Palm Springs, fascinated Neutra. His 1927 book “Wie Baute Amerika” ends with images of houses of the Indian peoples of New Mexico and Arizona, praising their overlapping rooms, with terraces on the roof and the ability of mud brick to withstand inclement weather. Despite the neat precision of the Desert House, it evokes the spirit of the houses of those Indian tribes, which he admired so much.

Richard Neutra built a building in which the horizontal planes of the decks seem to float on transparent glass walls, giving the whole an overall look of lightness. On the other hand, to take advantage of the small slope of the plot, the house is almost fused with the landscape that surrounds it, because its volumes do not rise too much above the land, almost the entire house is on a single floor, except a small terrace which is accessed from outside. Beside the house, in a somewhat lower level, a swimming pool reflects its structure.

The Kaufmann House distills space in the silver-plated horizontal planes that rest atop transparent glass panes. The unique sharp vertical feature is the chimney located next to the “public square”, as Neutra called it.

As in his own home, Neutra skillfully dodged the ban on building a second height, eliminating the walls of the roundabout, except for the chimney and the vertical sheets of aluminum. From an aesthetic point of view, they defined a clear plan, from a purely functional, serving as a shield against the wind.

Although one wing of the house sits on an east-west axis, the other sits perpendicular or to the cardinal directions to expand the areas of residence.

The large sliding windows, whose bronze-colored blinds alleviated the silvery glow of the house, lead to an open, adjacent courtyard in the living room and in the master bedroom, open to the pool.

The east wing is connected with the living space of the north wing through a gallery that houses a bedroom suite.

In the north wing another corridor opens along an outside patio that leads to two other rooms.

The lounge area, shared with the dining room and more or less square, is at the center of the house. The plan in the form of cross guarantees that the four wings get both daylight and good ventilation.

The south wing connects to the public sphere and includes a marquee and two long covered walkways. These walkways are separated by a huge stone wall to give entry to the services by one side and the house on the other.

In the west wing there is a kitchen, service spaces and rooms for staff which can be reached by a deck “breezway”.

The garden permeates almost inadvertently throughout the house with smooth oscillations. Even designed with right angles, the forms of the house are very smooth; yet the severe winds of northeast Palm Springs still blow everything they can get a hold of, despite improvements to the walls and blinds.

The decision to build the bedrooms and courtyards a spiral, reveals a specific social order. An extreme privacy is guaranteed both to the hosts, as the children, guests, and servants. The only coexistence between them occurs in the shaded walkways, terraces and courtyards. Blinds that flank a long dark pool connect the guest wing with the rest of the house.

The rear facade of the house opens to the landscape and garden, while the facade overlooking the street appears closed, with its facade of ashlar stone.

To give greater visibility to the renowned quality of “floating” in the design, the structural system combines wood and steel so that the amount of vertical supports necessary, limited in any case, is reduced. This is particularly evident in the living room, whose walls of steel and glass slide outward toward the southeast, while the construction of deck and supports the hanging wall sliding moving toward the pool and spatially linking the house with it. This radial arm became the hallmark of Neutra, is the “spider leg,” the umbilical cord that merges space and building.

Neutra used as basic materials stone, glass and steel, and tended not to depart from the range of colors than the desert offered, so that the house does not desentonase of their natural environment. Moreover, the presence of patios and porches in the housing connects the interior and exterior, so that the desert seems to be taking part in the same building.

The natural stone from Utah who Neutra used in the exterior and interior creates a vivid chiaroscuro effect that is difference in the smoothness in other finishes. However, the stone is carefully chiseled, both in the original house, for which Neutra trained masons who had worked in Falling Water, who had come Kaufmann, as in the restoration carried out by the new owners by mid in the 90s and lasted five years.

The main outdoor rooms are enclosed by a vertical aluminum fins that offer flexible protection against sandstorms and intense heat. This is repeated at the roundabout from the second floor.

The walls are made almost entirely with sliding windows. Although both have unprotected glass in the southern part of a home located in the middle of the desert seems crazy, this is because the house was to be used only one month per year, in January.

Support for windows that slide into the garden outline the house giving her silvery appearance.

In the gutters of Southern highlights a beautiful detail. At its eastern end, the narrow strips are continuing a stretch, so that the excess rainwater can flow to the east and dropped onto the rocks. The gargoyles are an architectural element known in Japanese gardens as in medieval cathedrals. Neutra and the modernization became a “leap of water” that is a tribute to the distant Falling Water House Bear Run.

It has also been used concrete and wood 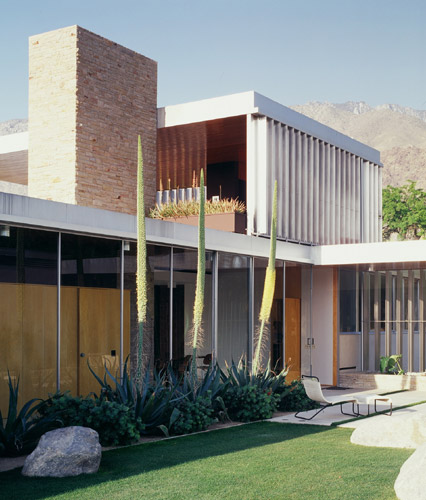 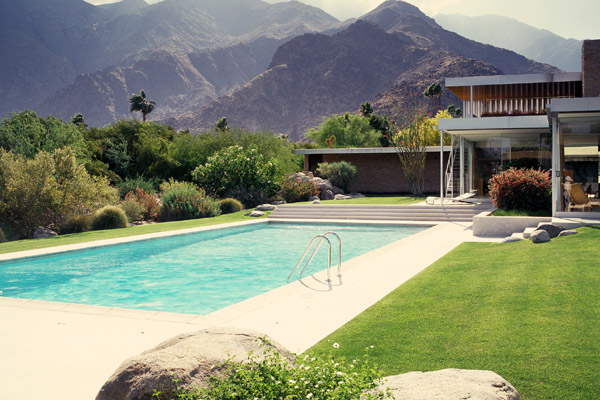 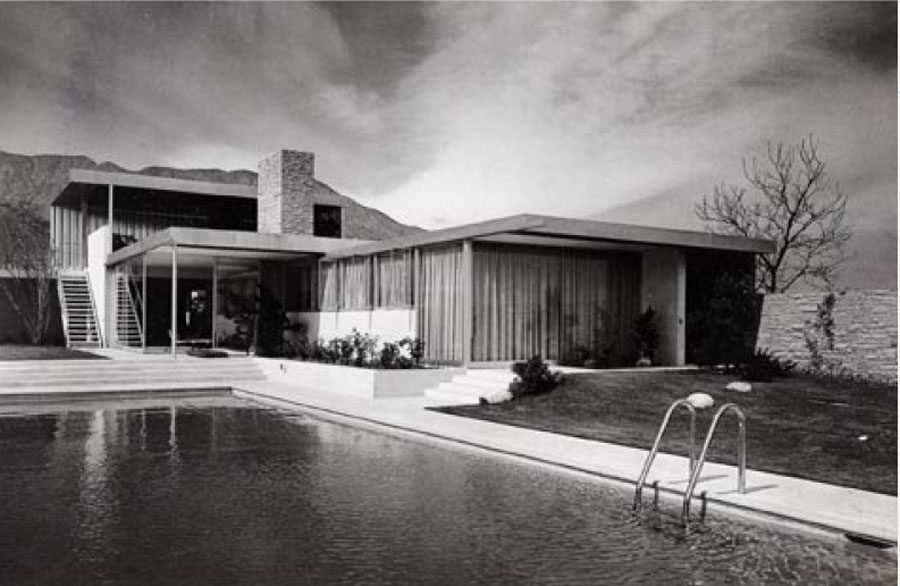 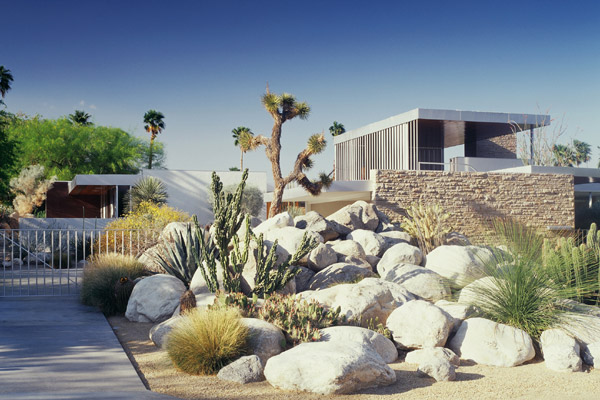 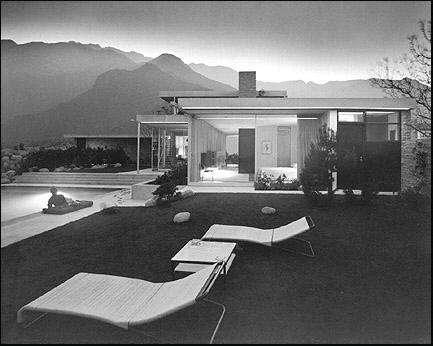 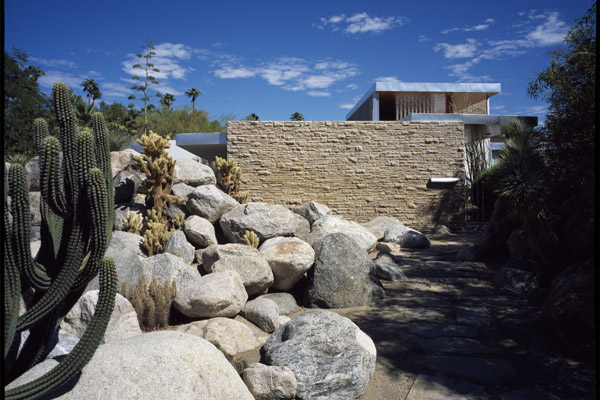 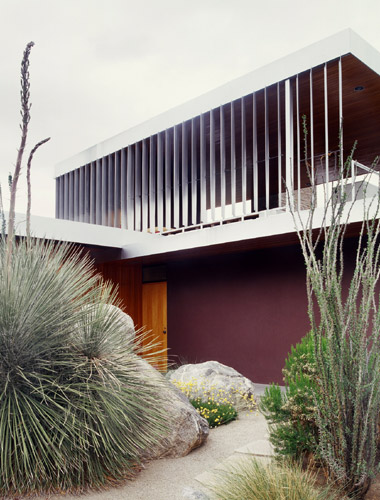 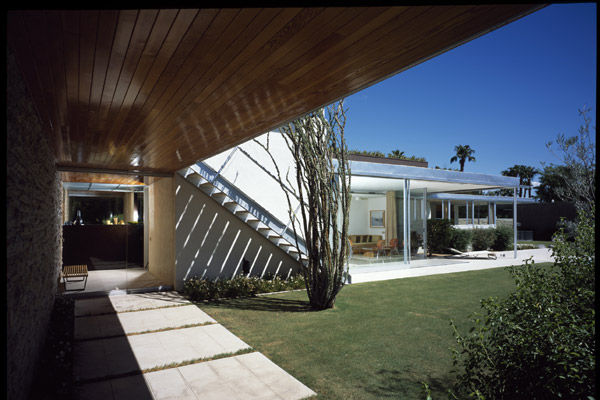 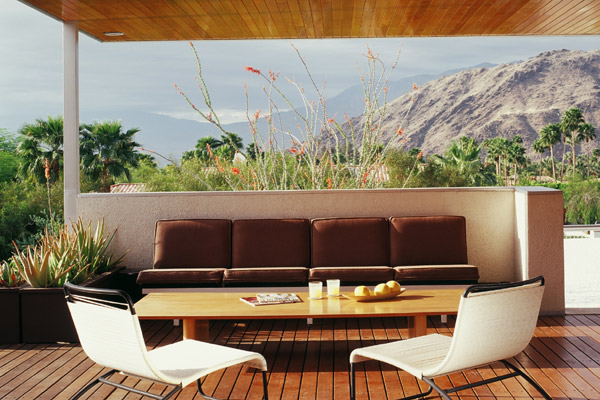 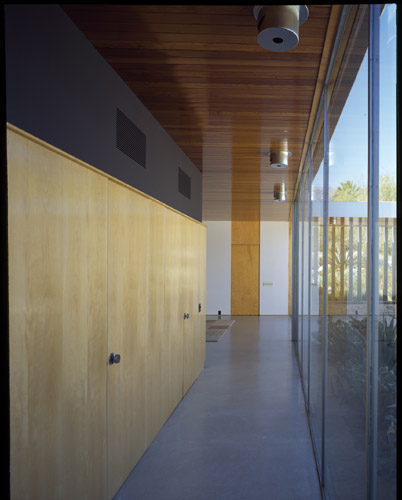 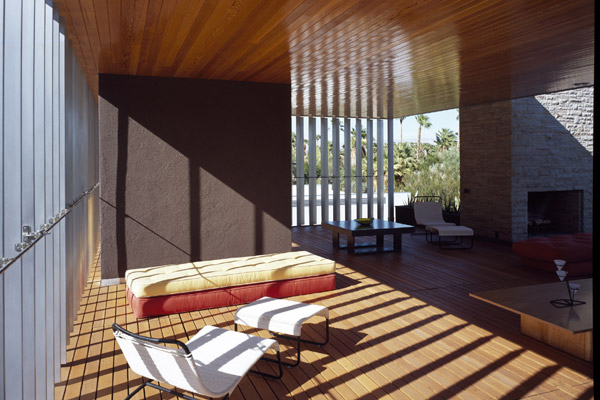 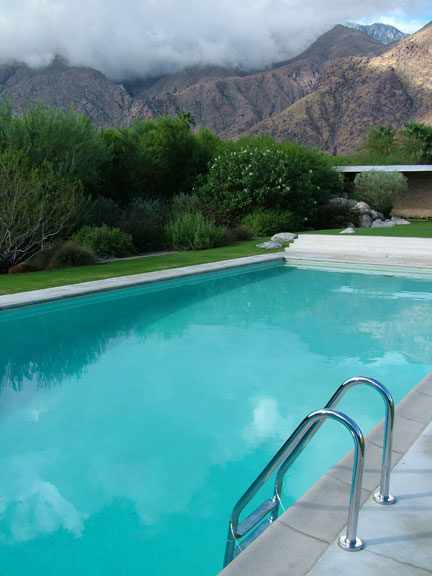 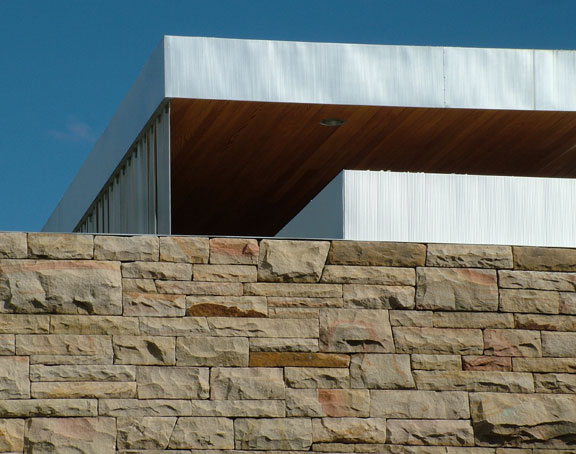 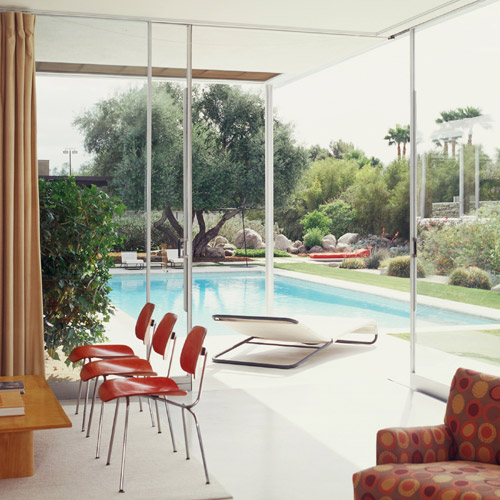 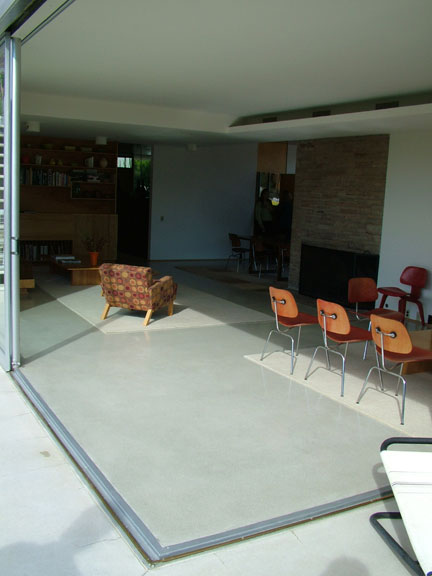 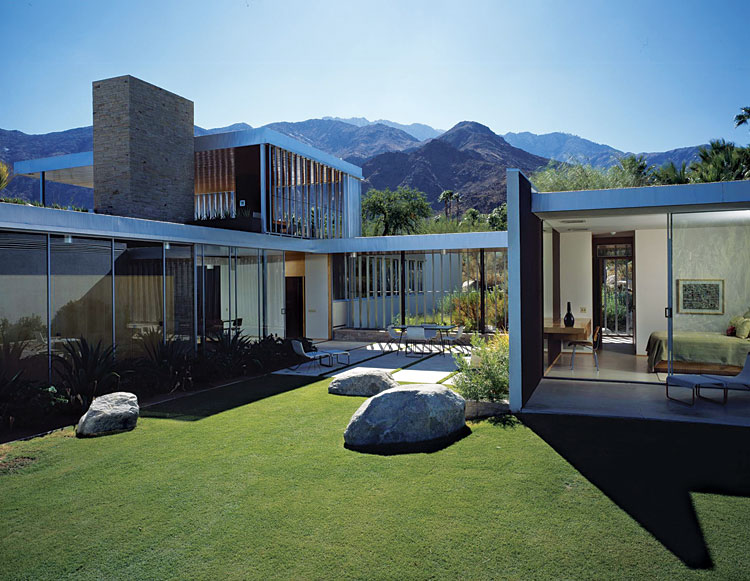 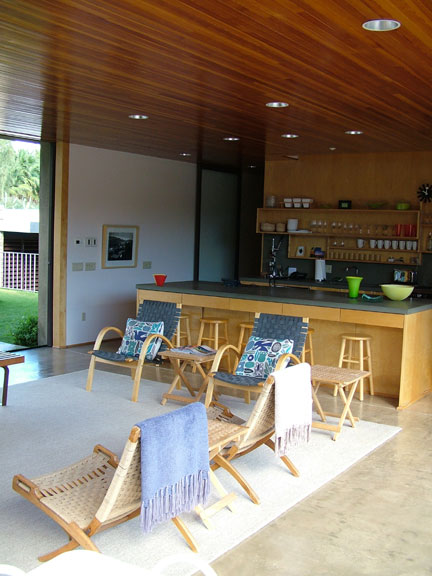 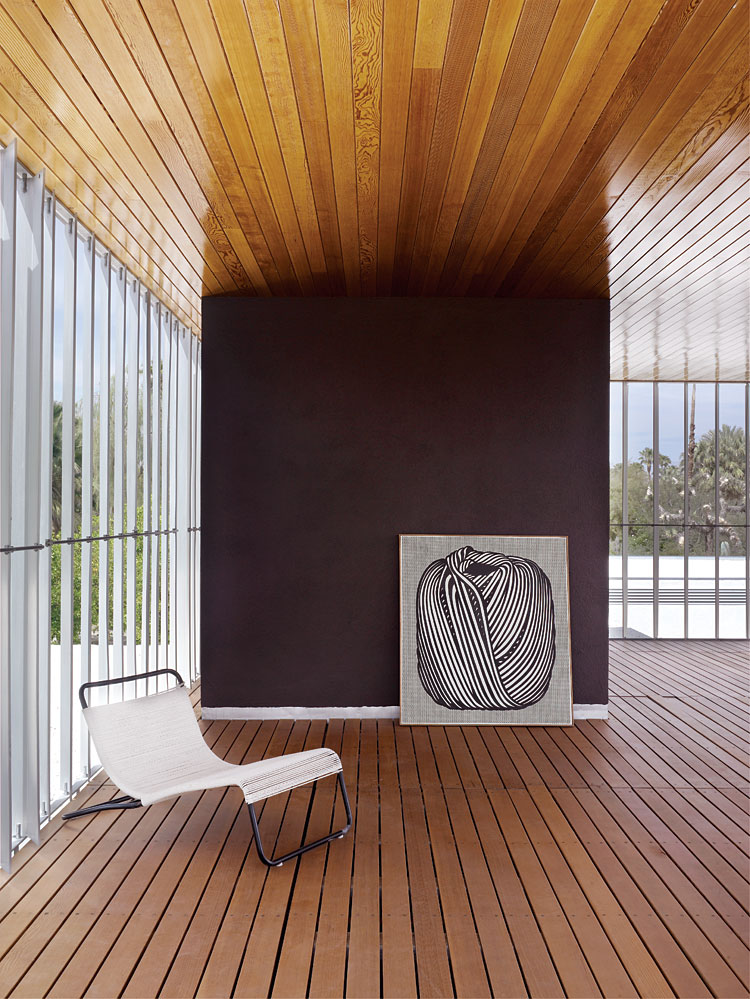 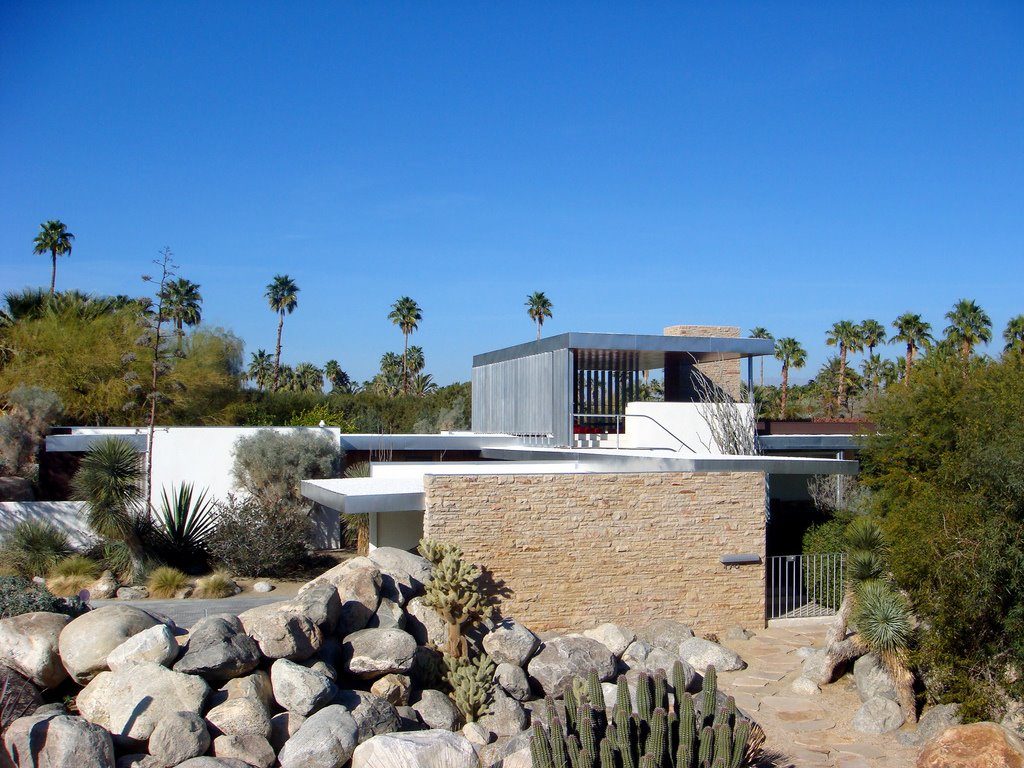 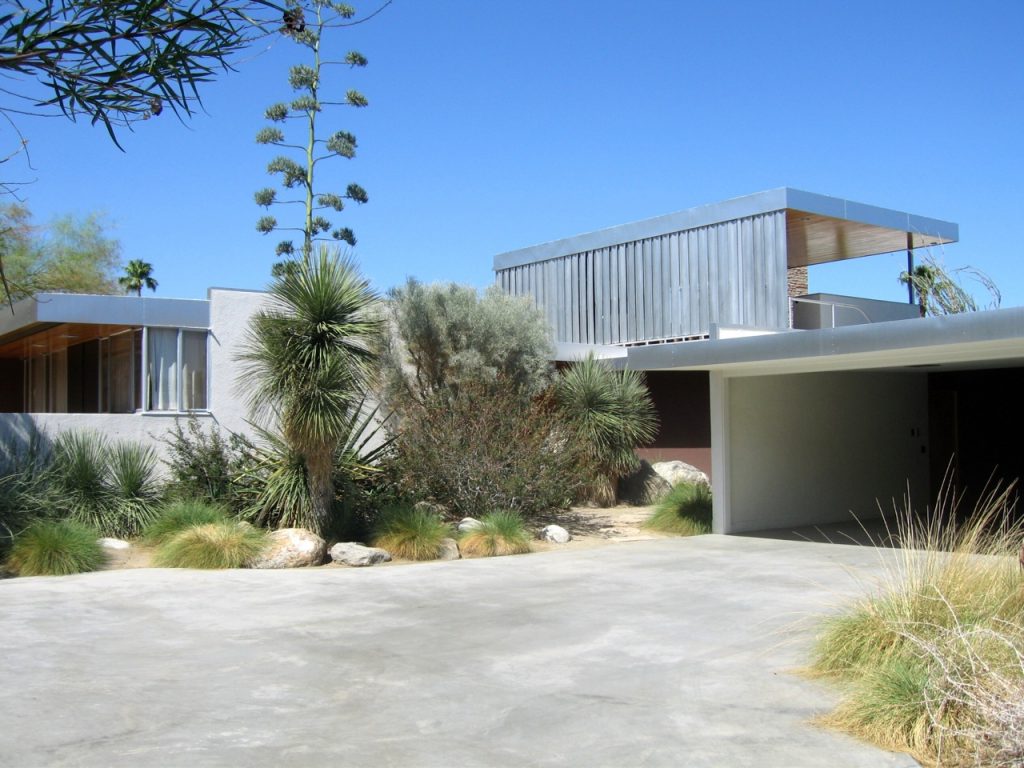