This small bar in the center of Vienna, with a bewildering staging, exquisitely sample while public and intimate, the combination Loos makes simple unadorned forms with use of opulent materials and simple details give an impression getting rich yet modern.

Mirrors covering the entire width of the wall above the bar and the opposite wall of the measure multiplied seemingly small lounge while they give the appearance of being surrounded by a number of independent columns. The simple geometry of the columns and beams independent, well arranged, creates a visual sensation similar to that created in the Building at Michaelerplatz, in the same period

The Kärntner Bar is located in the center of Vienna, in a side passage Kärtner Strasse, south of Stephansplatz, Vienna, Austria.

After a long time of its construction is still important the incomparable atmosphere in the place, cozy and dimly lit, with a use of materials that appear to predispose an especially “masculine” for a bar. This shows that Loos, in the sense of “speaking architecture”, trying to create effects in space with a distinctly cultural and social.

The “talking architecture” refers to the buildings themselves or explain their role and identity Adolf Loos makes the Kärntner Bar with combination of marble, onyx, mahogany, brass, mirrors and glass walls silk wall lamps that recreate the atmosphere of the time gentlemen identified with a “men-only”.

This work reveals and reaffirms the high sensitivity of the architect in the manipulation of space through the expressive use of natural materials. Adolf Loos skillfully manipulated classical materials making a careful composition of visual patterns.

The facade features a forepart shaped glass prism located on the three glass doors and the same size of the input. These doors are finished in brass coated separated by four red marble pillars of Skyros and originally functioned as only the central entrance.

The glass prism consists of two parts, the bottom facing the visitor, is composed of crystals that make up the American flag and lyrics composed by stained glass mosaics with the name of the bar. The top of the prism is flat. This prism is topped by a sign leaning against the wall of the facade Earl reads “American Bar”, noting that the architect’s admiration acquired by Anglo-American culture, while introducing the first bar where you could take just a drink, very different from his previous so typically Viennese Café Museum (1899), also reminiscent of an English pub.

This little bar, 27.72 meters square and consists of a single room of 4.5 meters wide and 6.16 background of its surface, the bar occupies one third. The seats are located in two small sections around three tables with white backlight that makes them stand out in the dark and yellowish bar atmosphere.

Loos uses an optical illusion inside, through the mirrors arranged parallel and vertically above the eye, thus multiplying the composition of the coffered ceiling with pieces yellow and brown marble.

The decor of the bar we used a wide variety of materials: marble, onyx, mahogany, brass, glass mirrors and silk wall lamps.

The bottom of the bar is lined with mahogany paneling and mirrors interspersed with one-piece, floor combines black and white marble as a chessboard, the bar is mahogany, covered by a solid wood armrests and clamps bronze. Originally the seats were upholstered with a flowery English cloth and all the lamps were covered with silks to mitigate the effect of light.

The only three tables in the bar, are octagonal in shape, with one foot and opaque glass top is illuminated from below

The marble pilasters, parallel to the street, extending to the ceiling with their beams and divide the space into three parts. This division into three longitudinal sections becomes three bays articulated beams and granite columns. This is the structure that frames the fields of opulent materials. 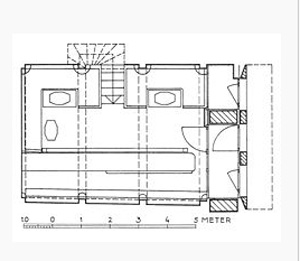 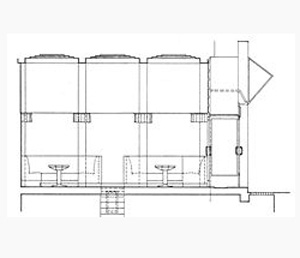 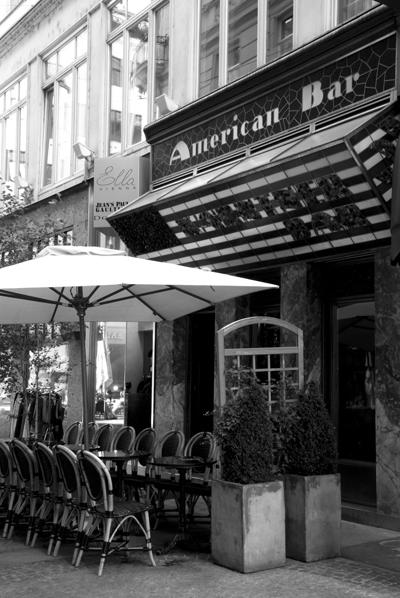 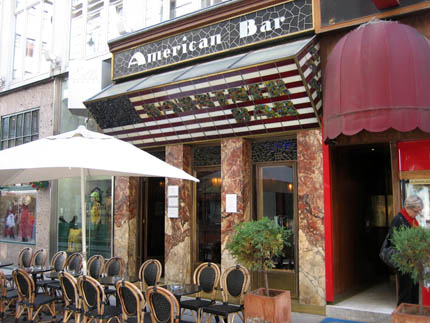 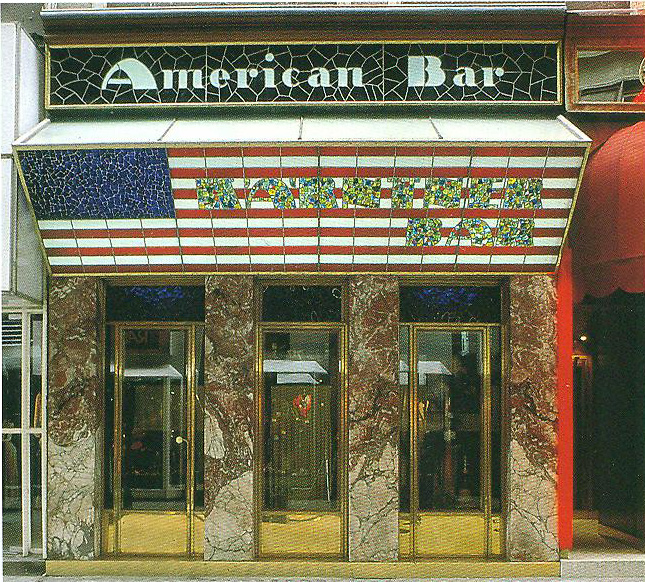 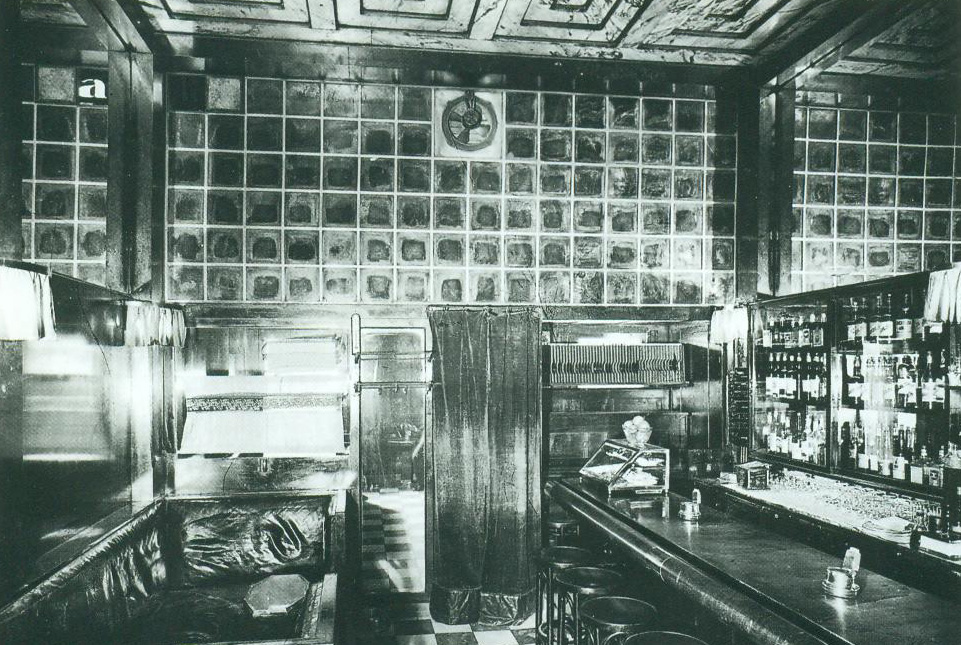 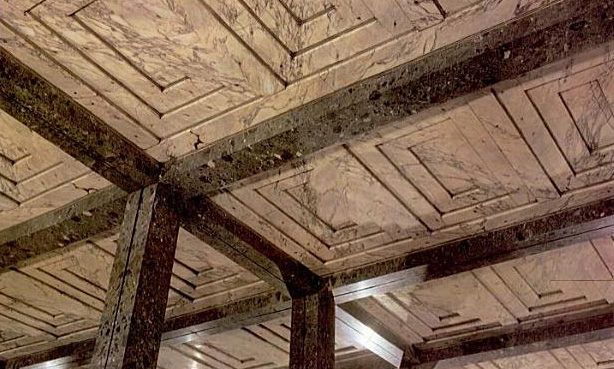 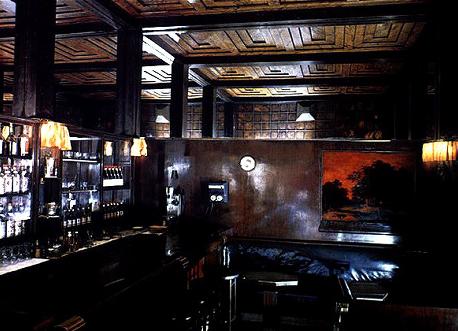 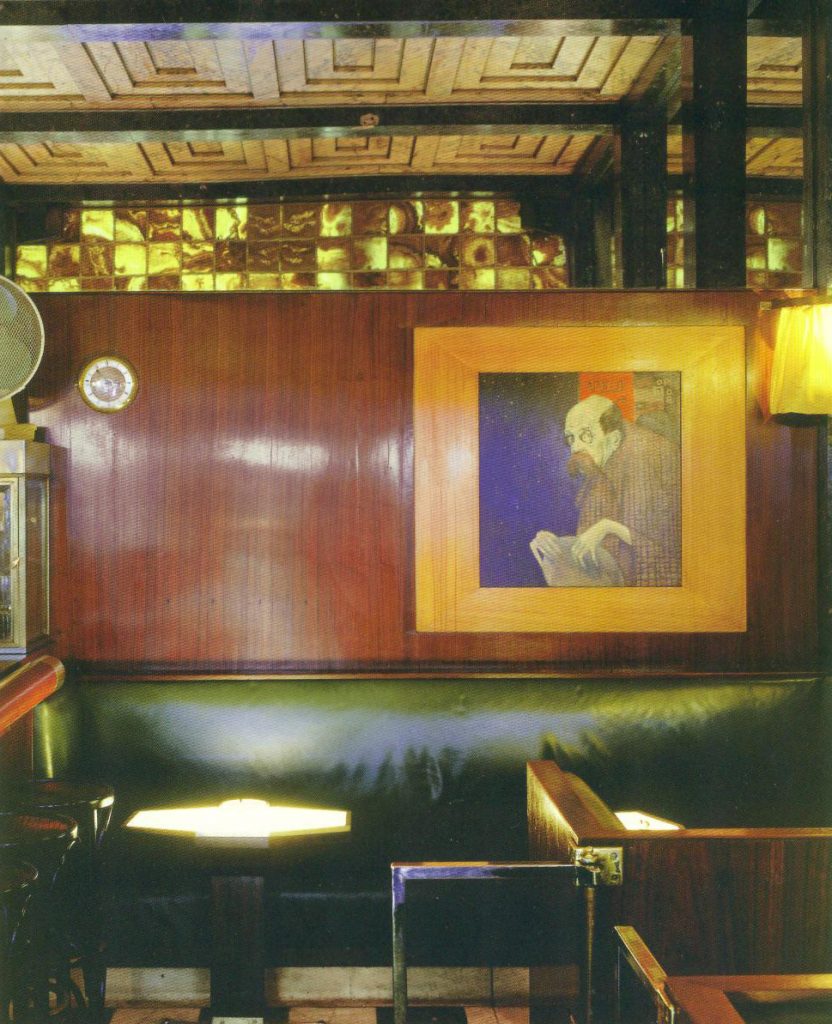 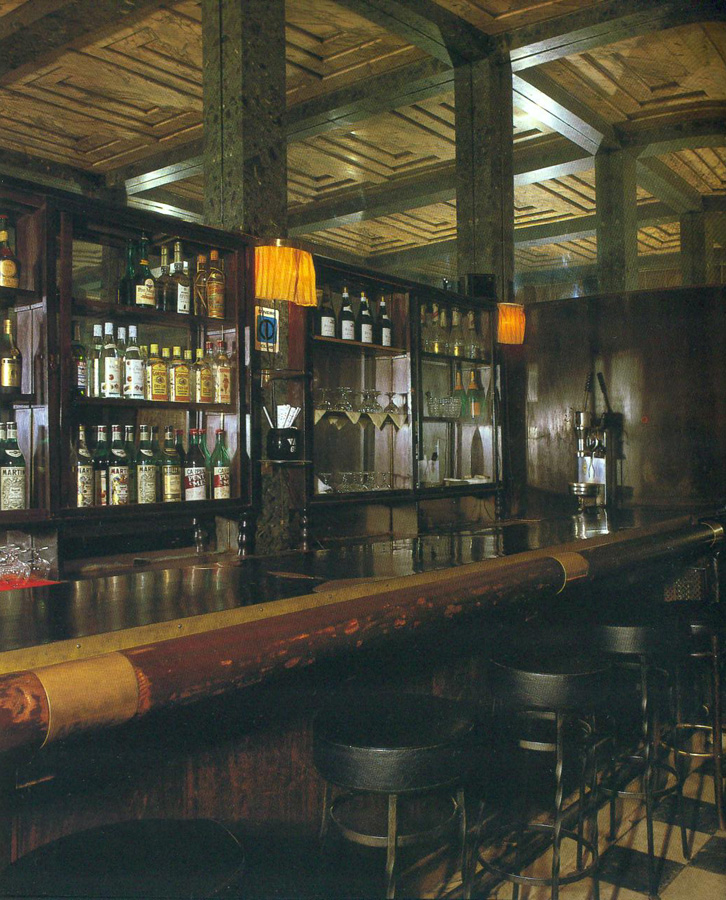