Although the magazine Architecture Arts made a substantial advertising of its architecture, Koenig just received orders from Northern California. But Cyrus and Elizabeth Johnson had seen his work in the magazine and decided to entrust a house in the area.

Caramel Valley is located in a rural area warm, about 16 miles from Caramel and the Pacific Ocean. The weather was not very different from Southern California, but the dominant architectural style was Spanish.

They had bought the parcel in the Johnson Ranchería was directed to the south, planted with trees and steep streets with respect to the distant view of rolling hills. To some extent, was a field comparable to the Case Study House No. 22, and Koenig had faced a similar project.

In memory of the project, citing the Johnson Koenig commenting that this house would be “a permanent residence with timeless design, a home that will remain here for our grandchildren.”

In concluding his description, writes: “The Johnson think his house of steel is minimal maintenance, and permanent materials that are used not crack or deteriorate or be affected by fungi or insects.”

Instead of building a swimming pool, and leveled the place with a reinforced concrete structure spot on one floor facing the landscape, once covered with filling trenches, became the basement. Over at the street level, organized the garage, the entrance and the bedrooms along the north side, and the kitchen and living room into a glass and flying wing oriented south. Thus, the L-shaped floor of the common spaces is a reverse image of the Case Study House No. 22. The only difference is the posting of the entry and the garage at the other end of the wing of bedrooms, which, instead of creating an L-shaped plan creates a T.

In the Case Study House, the garage itself was the entrance to the property and access to the building was done through the bridges along the pool. In Johnson’s house, a small bedroom separated from the wing of the garage to create a covered entrance with a view framed by the west wing of the living room. At the outlet of the living room and bedrooms, is the entrance hall. While in the Case Study House, the home is accessed by the inner corner of the plant L, Johnson enters the house from outside. Yet in both cases, the position of the free kitchen leads the visitor to the living room and central fireplace.

In 1995 Koenig returned to Caramel Valley to restore and expand the house to Fred and Cynthia Riebe. At that time, the house was not aroused much curiosity, and others who had built modern houses in the vicinity. The restoration meant to modernize the kitchen, which was extended into the bedroom wing to accommodate a bar for breakfast. Surfaces and high cabinets blocking the view of the kitchen was redesigned to become a pantry wall that held the bottom of the metal panels. Placed a new ceiling with recessed lighting to define the space and make more sense to stay closed.

As in the Case Study House, Koenig takes a plot of 6 square meters with singing steel beams that span the entire length of the wing of the living room and are projected in space. While the Case Study House in the end of the beams was cut off squarely, in this case the spindle beams that reflect more accurately the weight of the cantilever and at the same time give a greater sense of standard purity. The roof of sheet metal panels of 150 mm and T-section, wider than in the Case Study House, extending between the beams and an overhang extending from 2.10 meters around the entire house. As Koenig writes in memory of the project, the cantilevered deck, as well as protecting the inside of sunlight, increases “the feeling of living in close contact with the outside world.” Again, Koenig used sliding glass doors x3 meters of 2.40 to close the wing of the living room and aimed at the southern facade of the dormitories, but, at the request of Johnson, inserted a solid wall of 6 meters in the side west of the lounge area to protect the furniture and the piano. In the interior, finishing the living room is natural teak wood. On the outside, the house is lined with vertical panels of sheet metal painted a light beige color to match the color of the oak flooring inside. As usual at this time of their buildings, the roofs are of sheet metal panels in sight, painted white.

In this house, as in the Case Study House, the election of a plot of 6 square meters does not fully exploit the potential of structural steel beams that stand even under the overhang at the southern end suggest a linear fashion. However, an election was necessary because the bi-directional nature of the plot in the form of T and L does not allow a single dominant direction. Oberman in the house, built at the same time, as we shall see, the linear nature of the facility to organize the structure and then unidireccionalmente underpin structural panels of sheet metal. 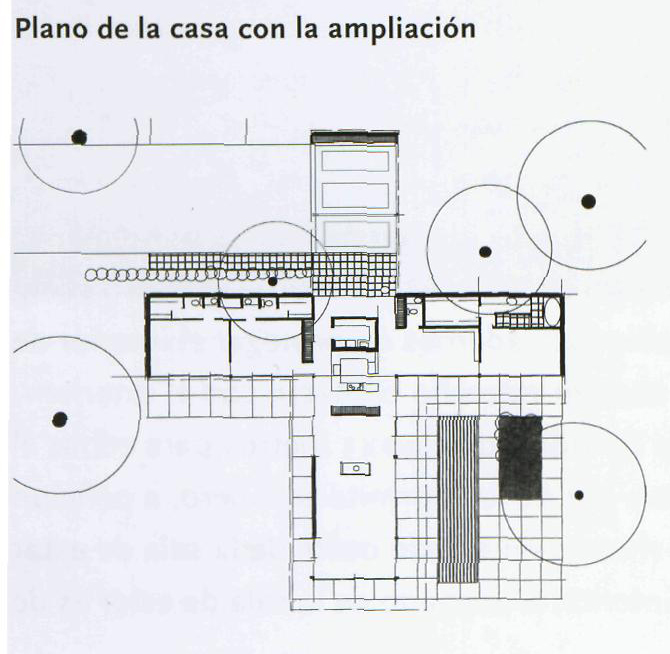 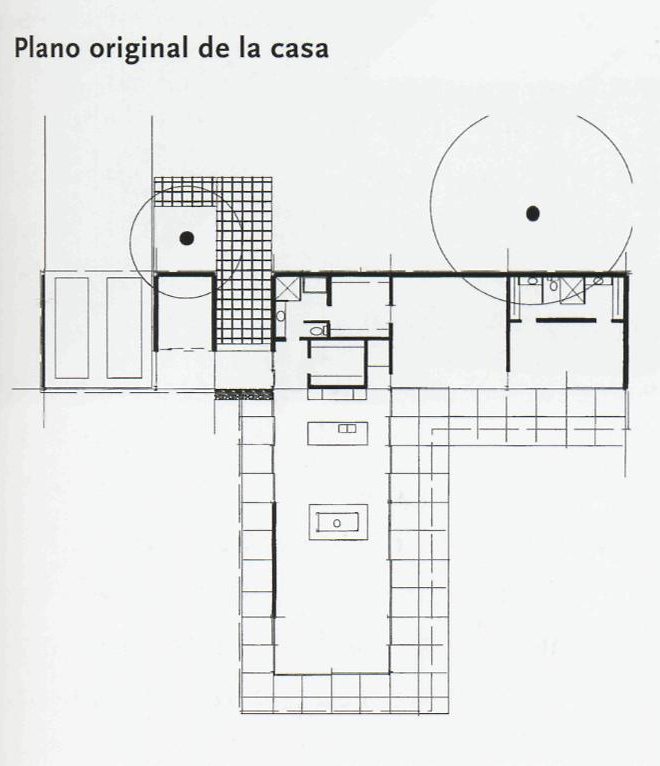 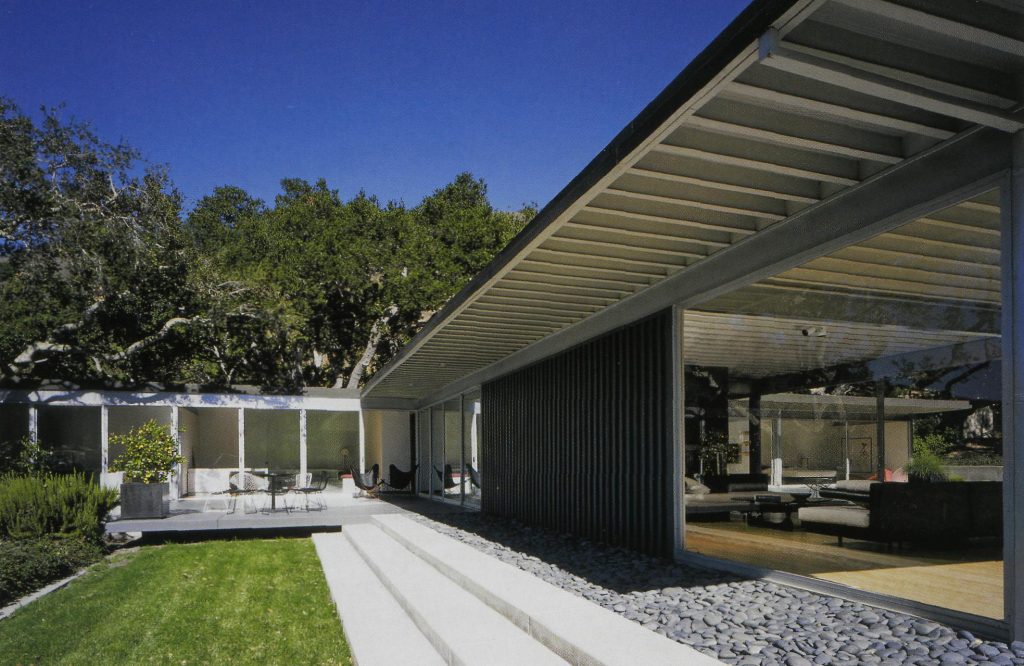 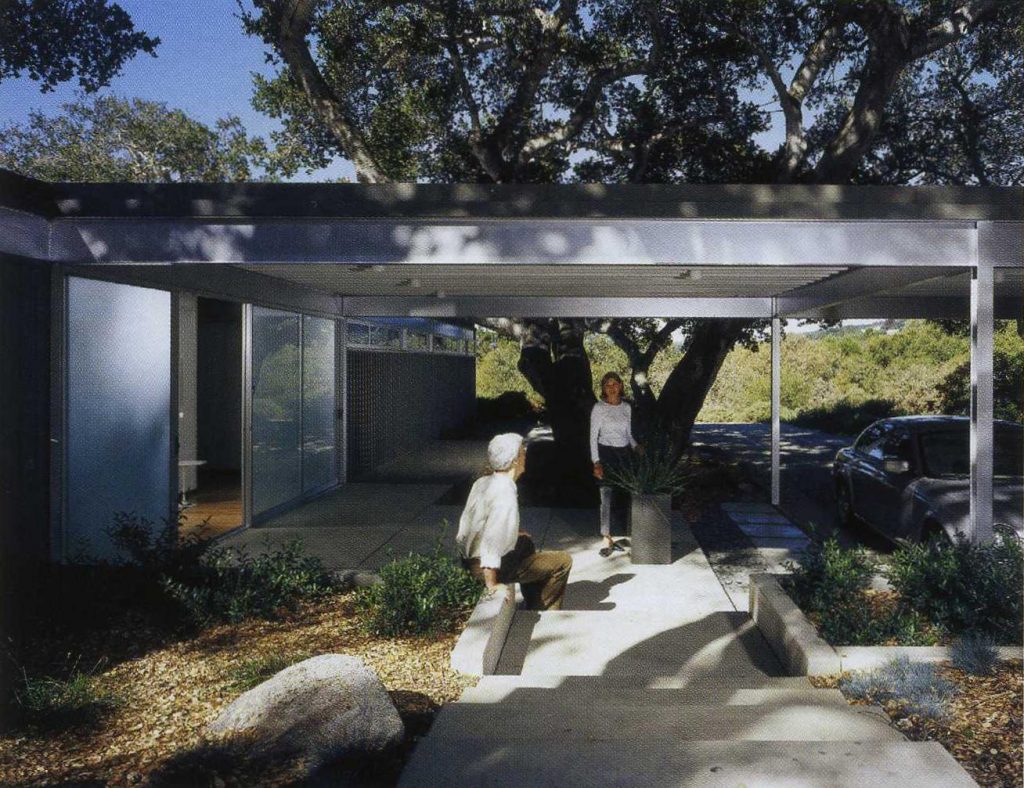 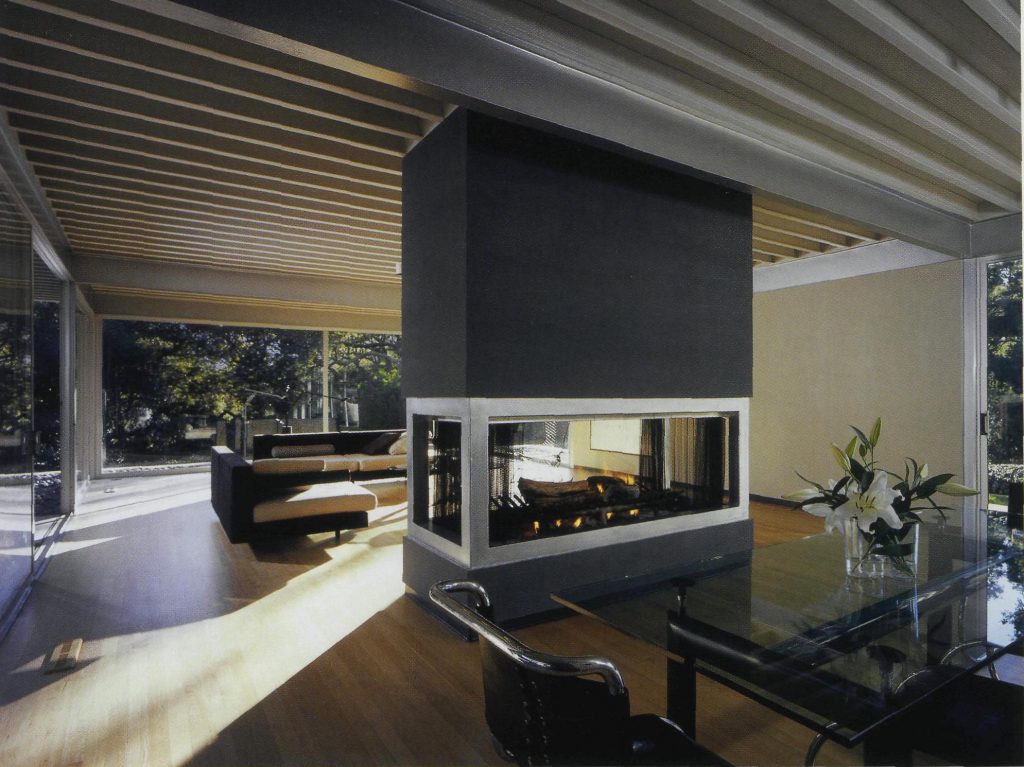 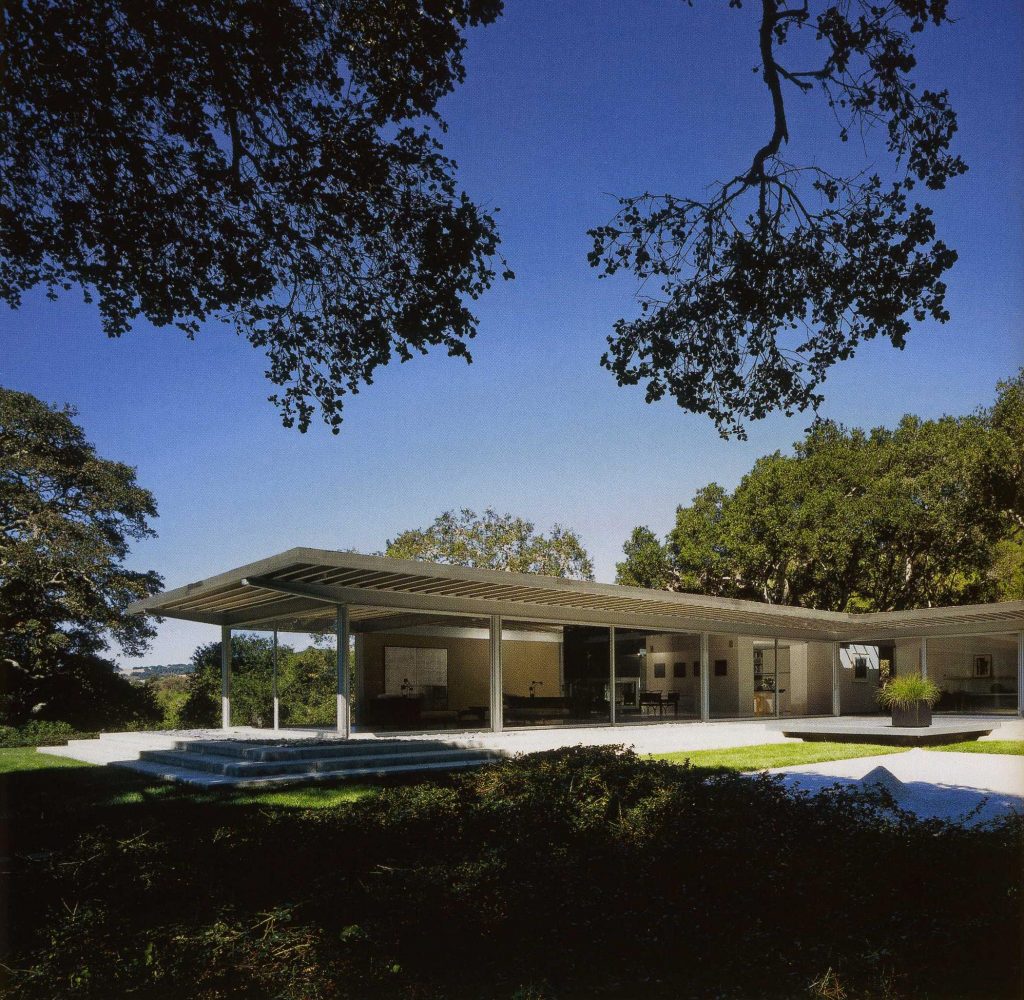 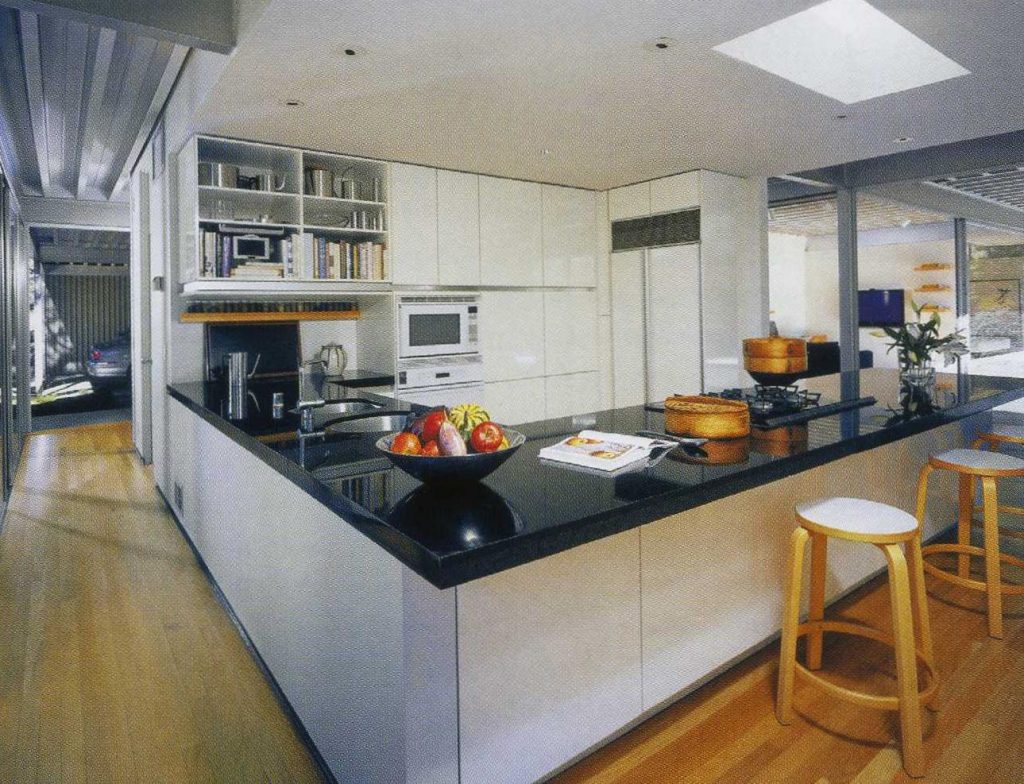 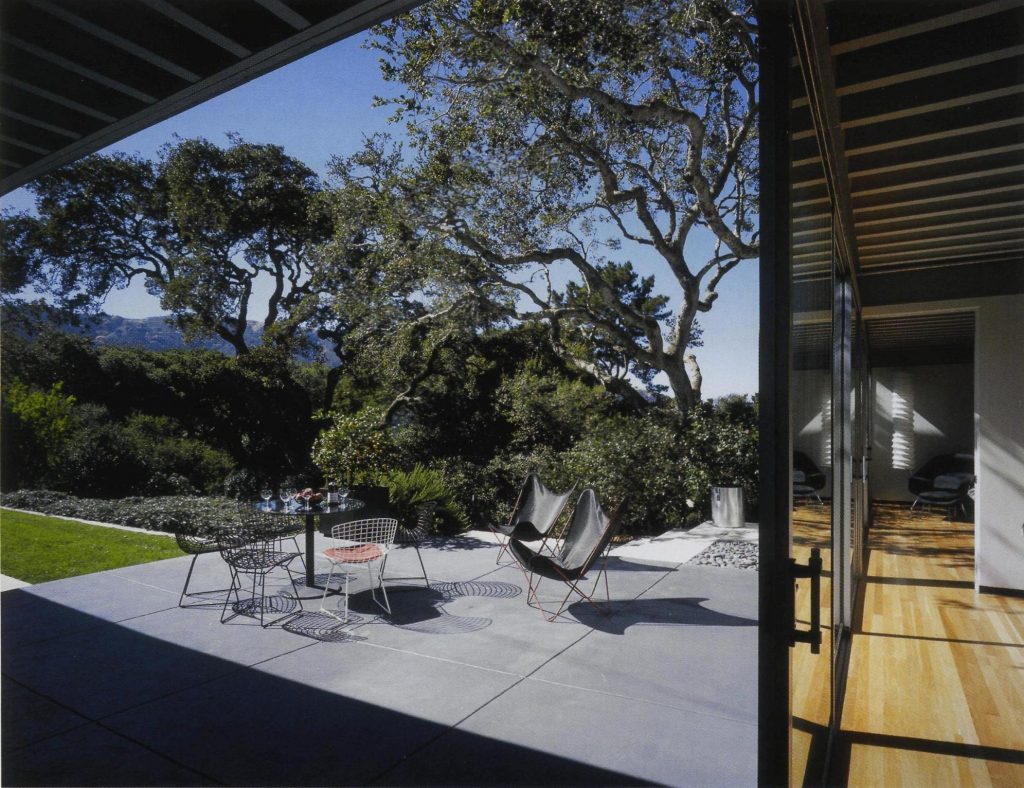