Completed in 1979 the complex of the Library and Presidential Museum JFK, work of the study I.M. Pei & Partners, is dedicated to the thirty-fifth president of the United States. Under a glass pavilion are distributed the administrative areas and the museum, overlooking the harbor.

Plans to build the John F. Kennedy Presidential Library and Museum were in progress prior to Kennedy’s assassination in 1963 and accelerated after it took place. The architect I.M. Pei de I.M. Pei & Associates was chosen to design the library, a Modernist structure composed of an amalgamated cube of glass and concrete, a pyramid and a cylinder. After a decade of financial and political setbacks, construction was finally started at Columbia Point, in Dorchester Bay. In 1978, Kiley Tyndall Walker was hired to prepare ten-acre plots for an old landfill whose soil was covered with 4.5m of soil. Because the location of the bay was exposed to strong winds, Kiley planted the entire site with native and resistant vegetation.

“… In the horizon of his city, in the distant horizons to which he guided us, in the canopy of space in which he launched us, visitors can experience a revived hope and a promise for the future …” (I.M. Pei)

The vegetation planted in the place creates a pragmatic landscape that does not try to provide experience or individual identity beyond simply surrendering to the visitor. Much more than the decoration of the landscape, formal efficiency and limited spatial expression put the visitor directly in touch with the expansive scales.

The design complies with a complex program of mixed use while reminding the president in a contemporary but timeless way.

As in many of Pei’s major projects, the design of the JFK Library was organized following a fundamental and scrupulously executed geometry of simple squares, triangles and circles. The organization began with an array of columns placed uniformly on the ground and over which four bays of columns were superimposed to which diagonals were added to define the rotated squares and straight triangles that became the fundamental nuclei of the construction .

The lower level of the building is delineated by a rotated square designed with four grid modules. The upper part of the building is generated by the successive division of this square into smaller and smaller triangles, until the ten-storey tower is completed.

The design of the addition of the Smith Center, also made by Pei´s firm, followed the same geometric pattern of the original building.

In addition to the museum, the building consists of a 10-storey triangular tower that houses archival, educational and administrative functions. A cylindrical base of two floors with space for exhibitions and theaters, and a commemorative pavilion of 33,53m of height that gives coherence and approach to the set. A generous staircase unfolds around the cylindrical volume and connects the museum to the shoreline.

A two-tier design organizes museum spaces, an underground level with insulated and dramatic key elements at the top.

The JFK Museum is located in a ten acre park at Columbia Point and contains a myriad of information about the culture and heritage of USA history, preserving the memory of JFK. The mission of the JFK Museum is to allow community access to historical archives while narrating the president’s life story through three theaters and twenty-five multimedia exhibits.

From the darkened stage of the lower exhibition areas, visitors emerge into the silent and illuminated void that forms the glass pavilion framing the space of 24.38×24.38m and a height of 35m. With the exception of a huge American flag suspended above, the double height of the atrium is completely empty, allowing viewers to have time to contemplate the sky, land and the open sea.

“… Its openness is the essence … In the silence of that space raised and full of light, visitors will be alone with their thoughts and in the reflective mood that architecture seeks to engender, you may find yourself thinking of John F. Kennedy In a different way … “(IM Pei)

The Library, designed by I.M. Pei & Partners of New York, represents an important work of late modern architecture. Completed in 1979 it was expanded in 1991 with the construction of the Stephen E. Smith Center, also designed by I.M.Pei as support for educational and cultural programs adding 1951m2. It was again renovated in 1992 by HNTB.

Building of the Kennedy Library began in August 1977, with the conduction of more than 400 concrete piles. To overcome the existing conditions in the field was necessary to raise them 4.50mts.

Within a limited space and budget, the design had to comply with a program of complex use. Pei‘s solution consisted of a ten-storey triangular tower housing archival, educational and administrative functions, a two-story base with exhibition space and two theaters with 230 seats and a 35m-high commemorative pavilion that provides coherence and focus To the whole.

A spatial structural system allows the large glazing that opens the place to the beautiful view of the port, with the intention of enabling contemplation and reflection.

Originally with 10,684m2, the library reached its current size of 15,236m2 squared with the addition of the center of Stephen E. Smith in 1991, and the block for file – warehouse in 2012. The building is composed by a tower of 38.10m of height Divided into 10 prefabricated concrete floors and attached to a glass pavilion, flanked by the Smith Center, with an adjacent storage area on one side and the lobby and museum theater area on the other.

The main materials used in construction are prefabricated concrete, steel and glass. The land was planted with grass and beach shrubs to remember the love Kennedy felt for the sea.

The entrance drives the winds through strips of American beach grass, beach plum and bay berries.

The entrance to the complex is established by a series of little white bollards spaced on one side and Japanese black pines on the other. The route culminates with a circle of carefully pruned wild apple trees followed by the parking area surrounded by a rugged pink cover and orthogonal rows of dense black Japanese pines. 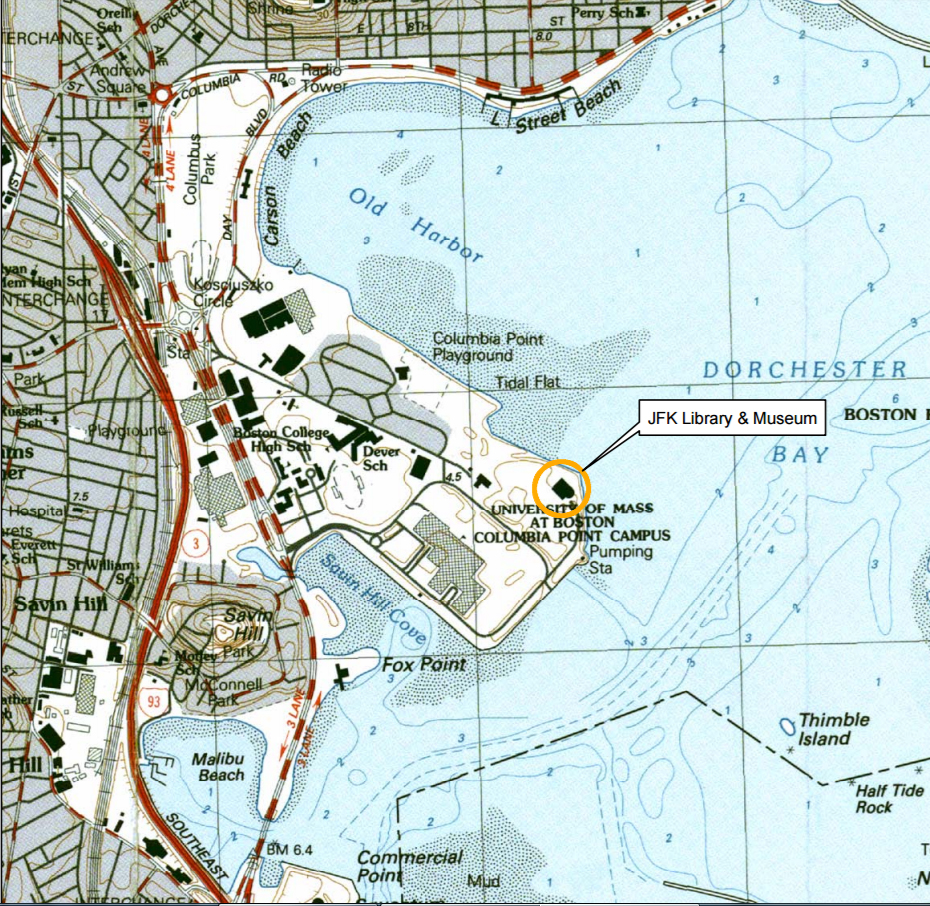 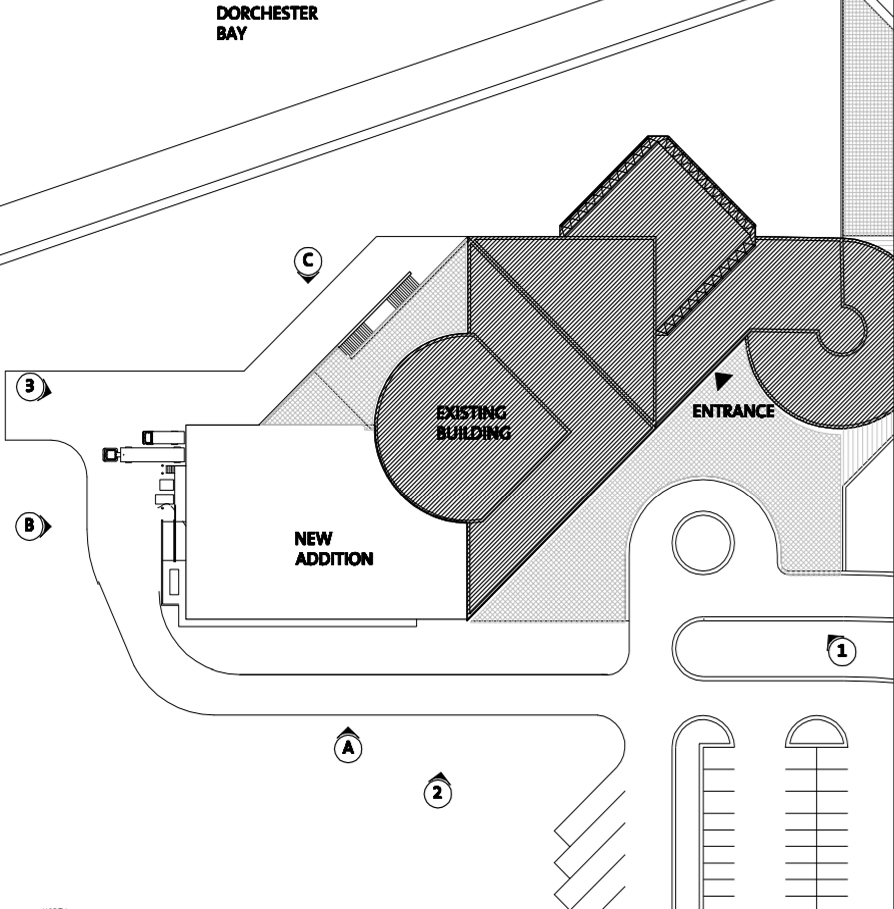 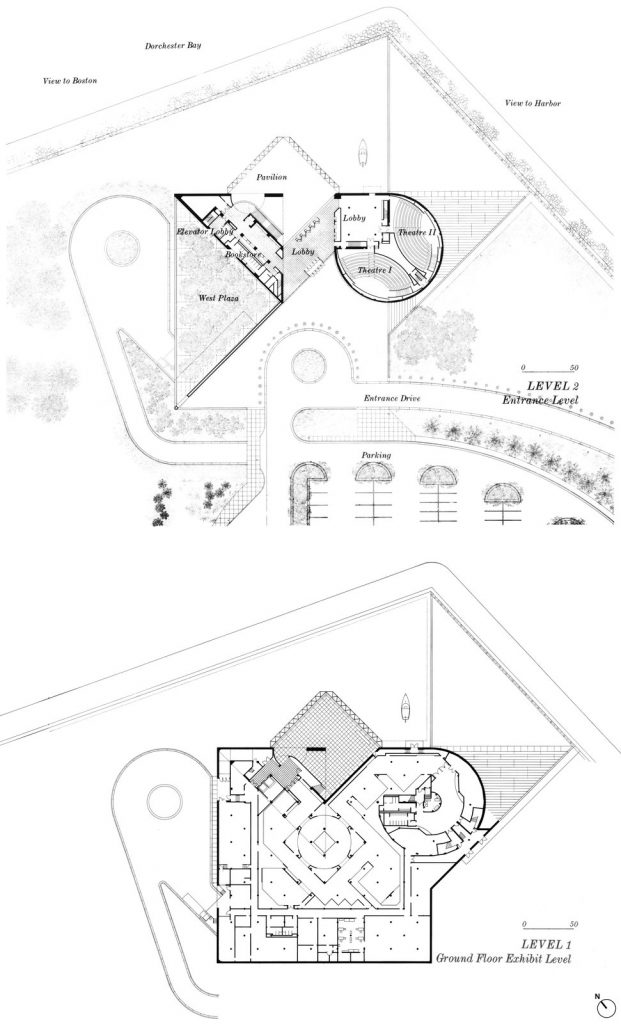 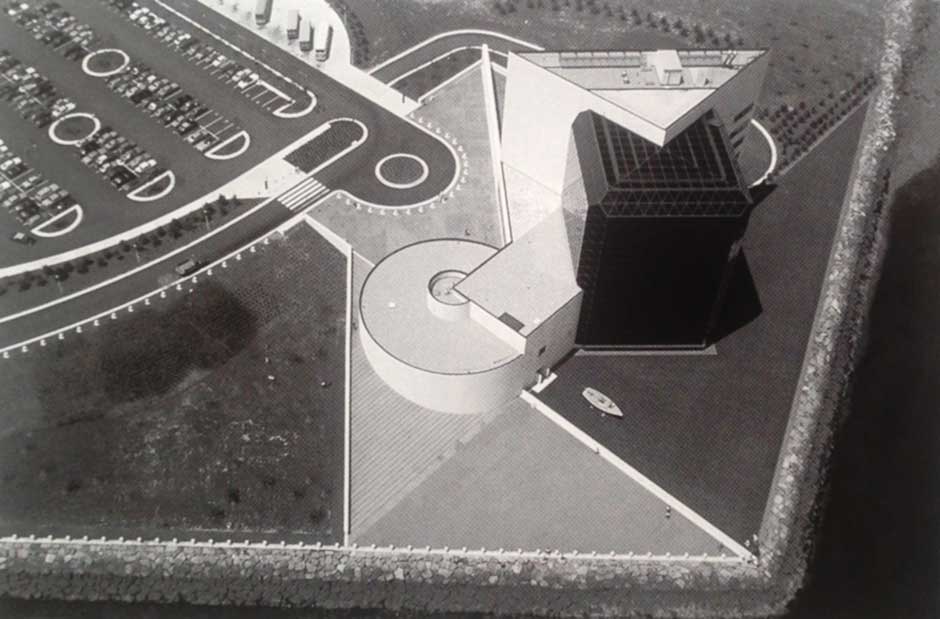 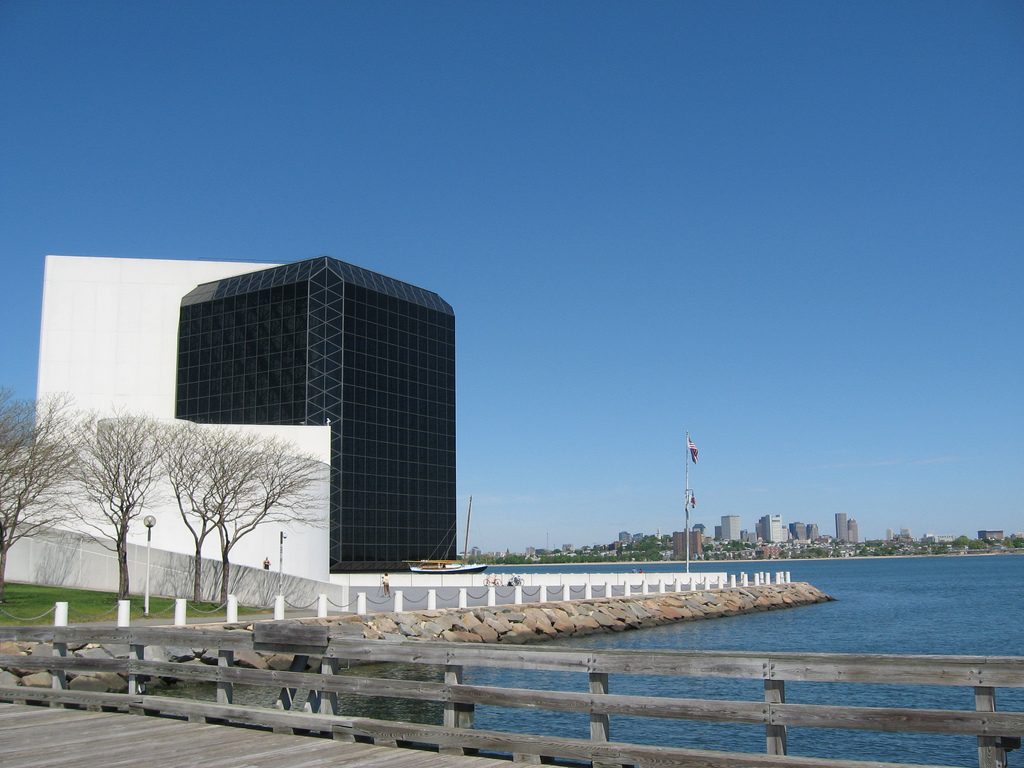 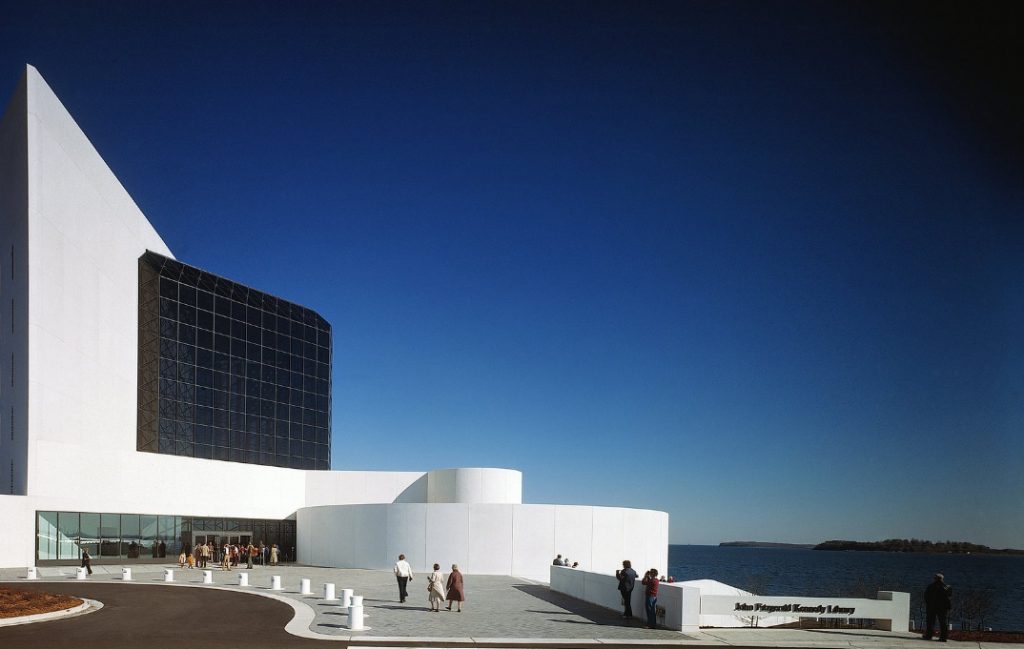 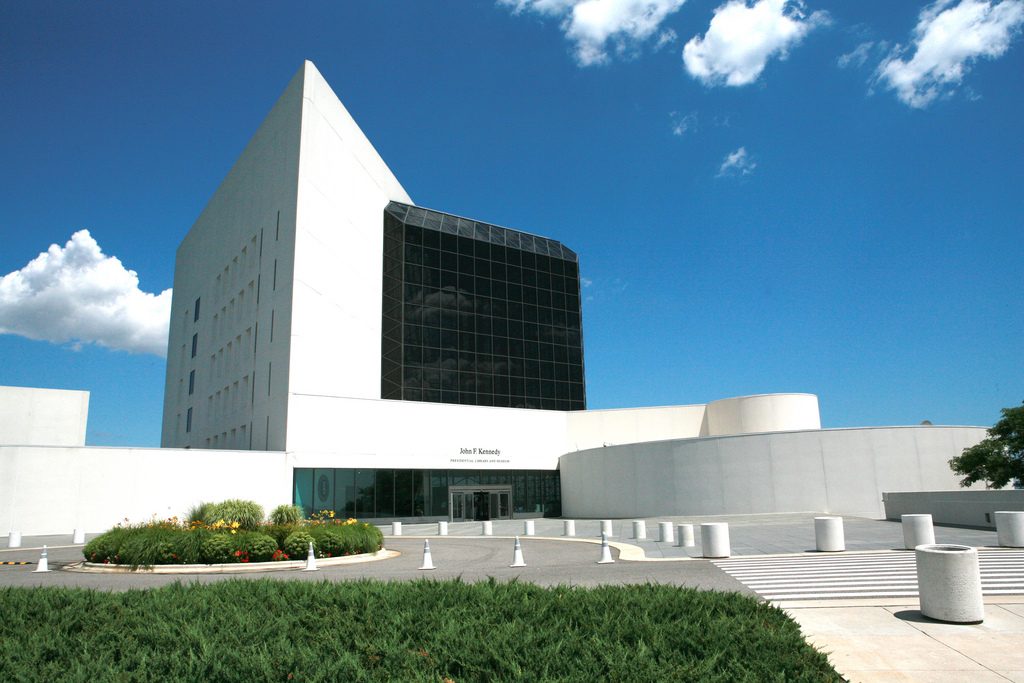 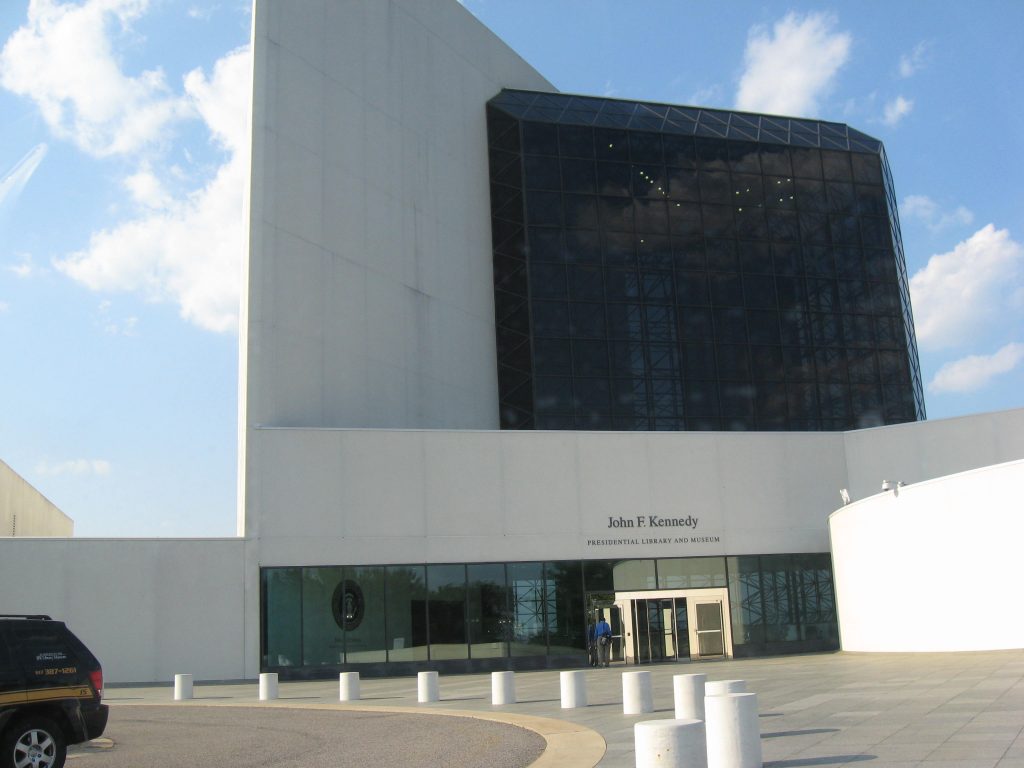 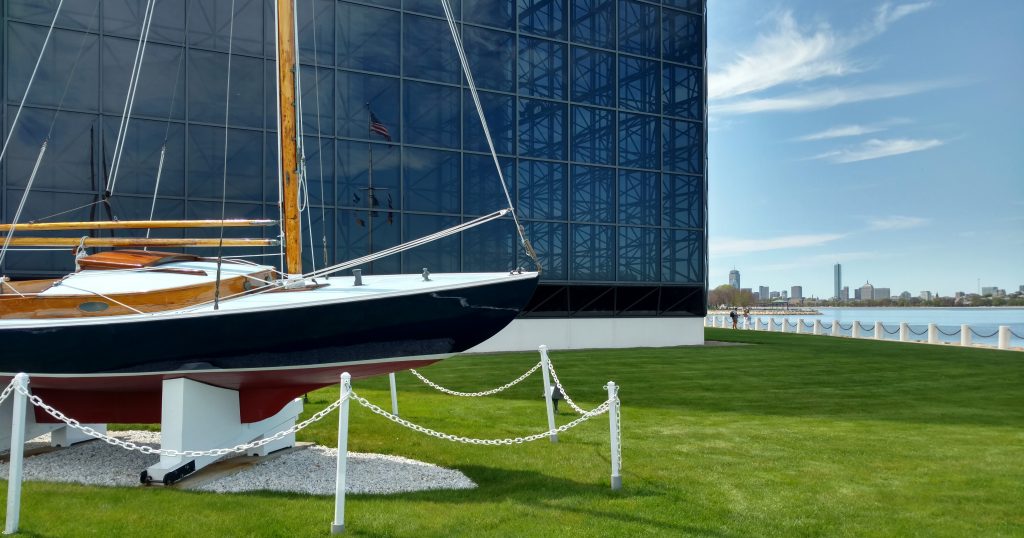 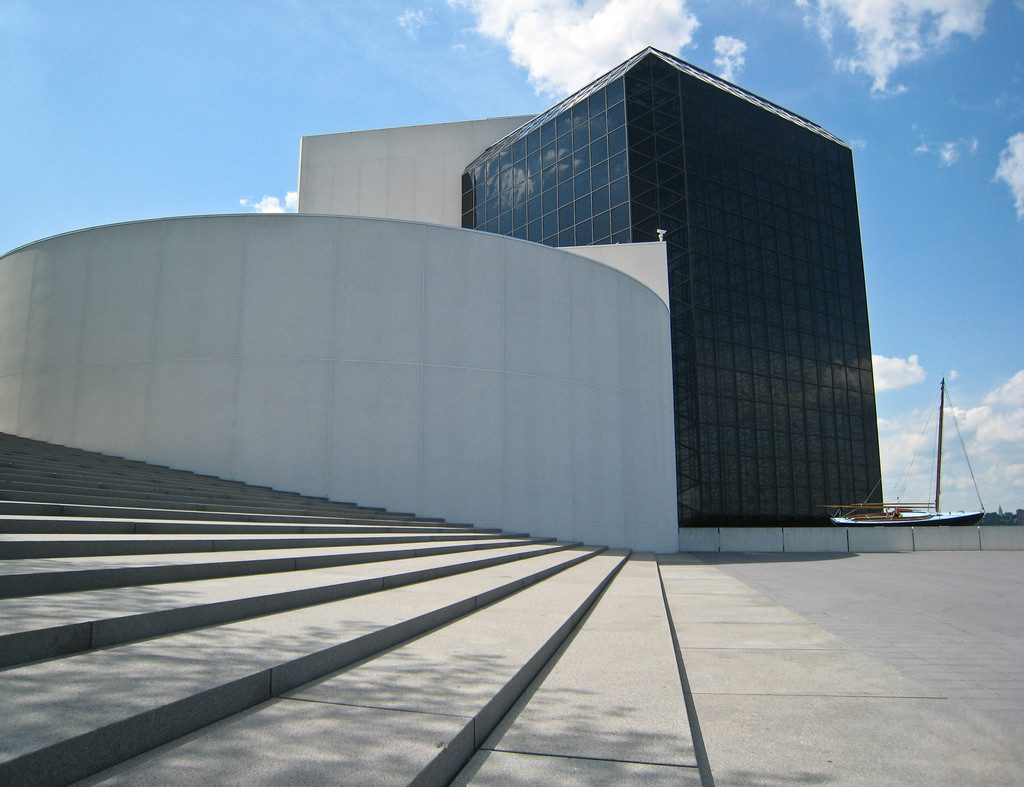 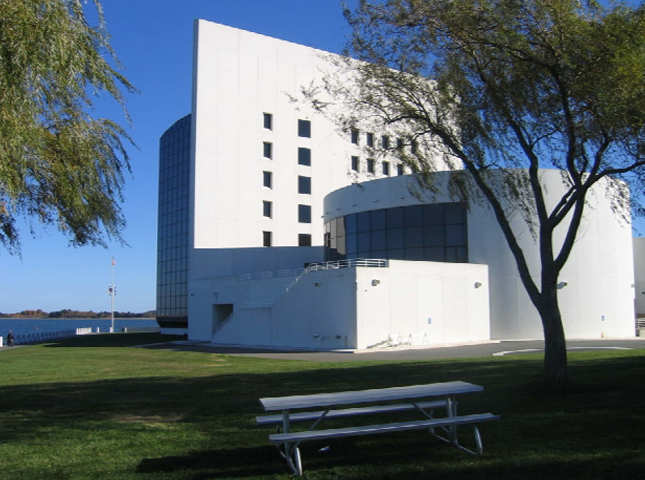 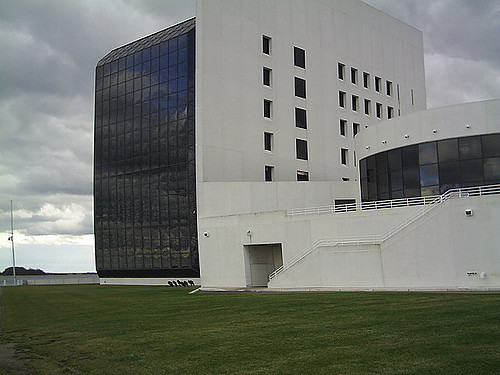 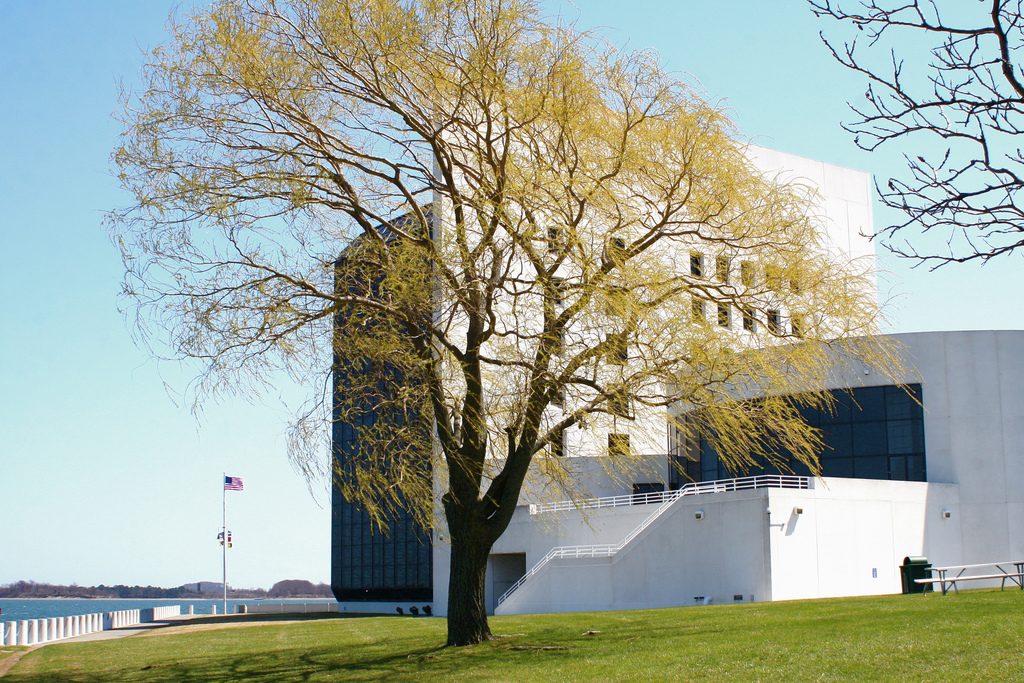 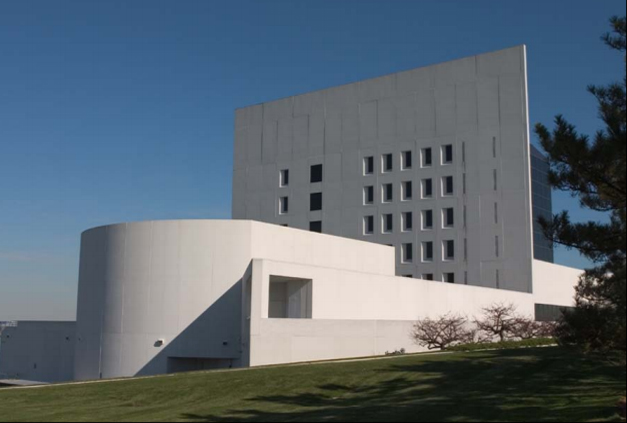 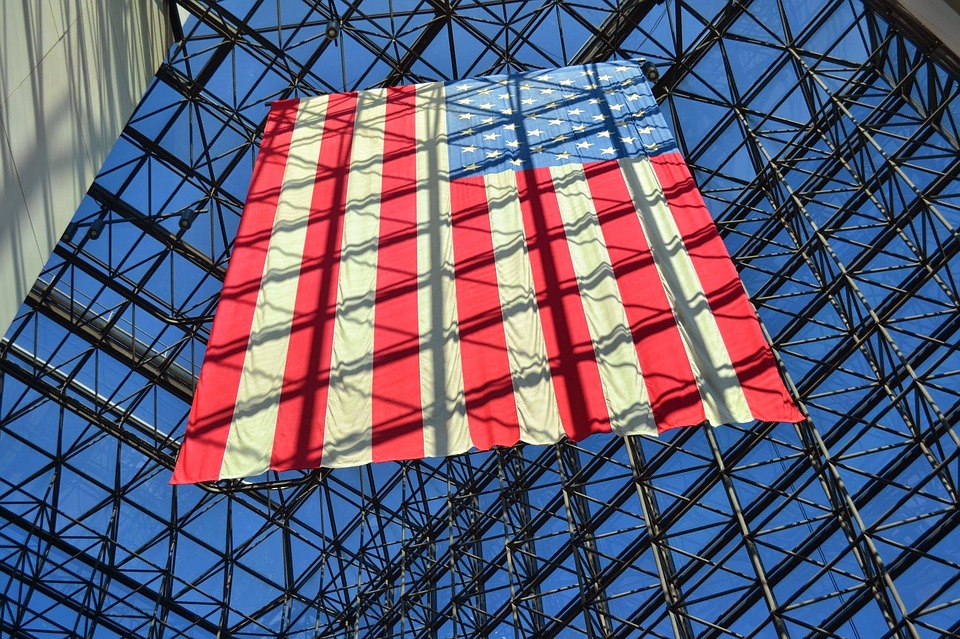 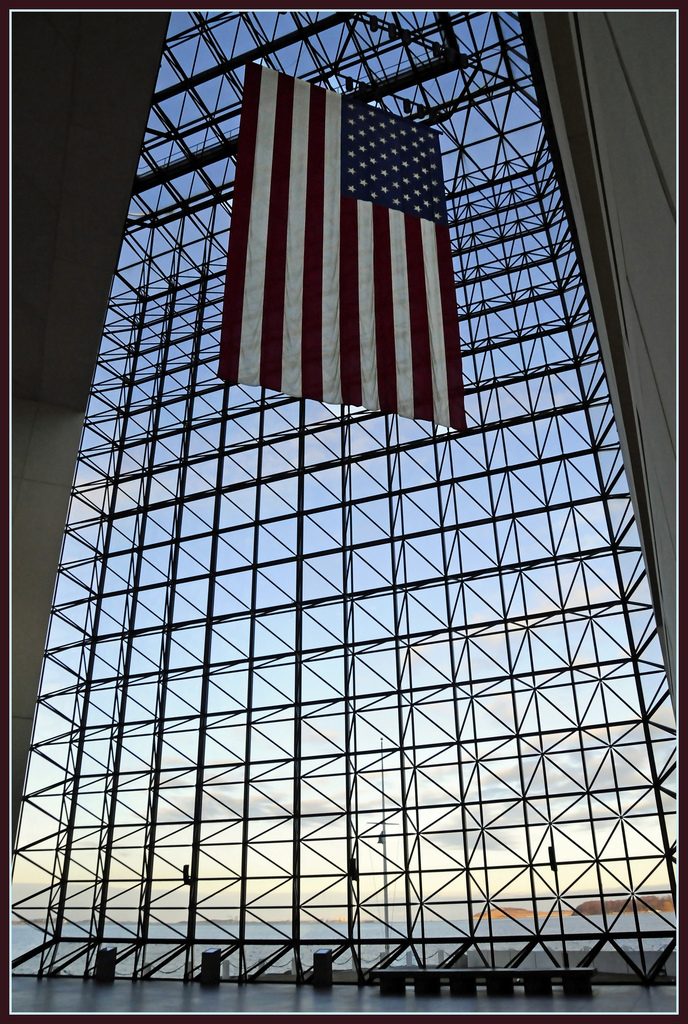 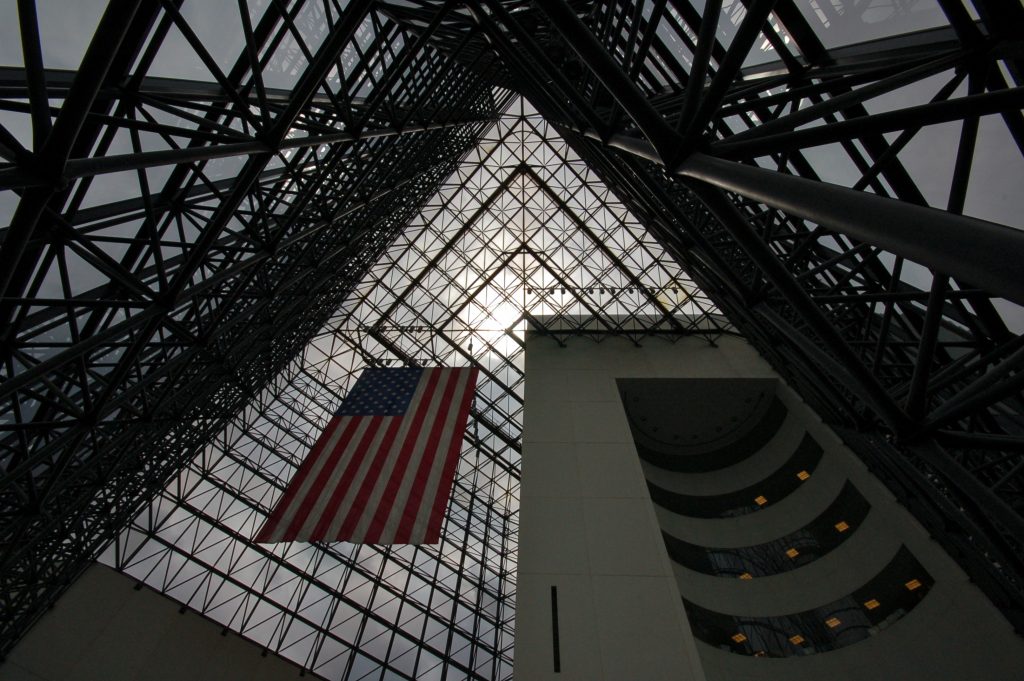 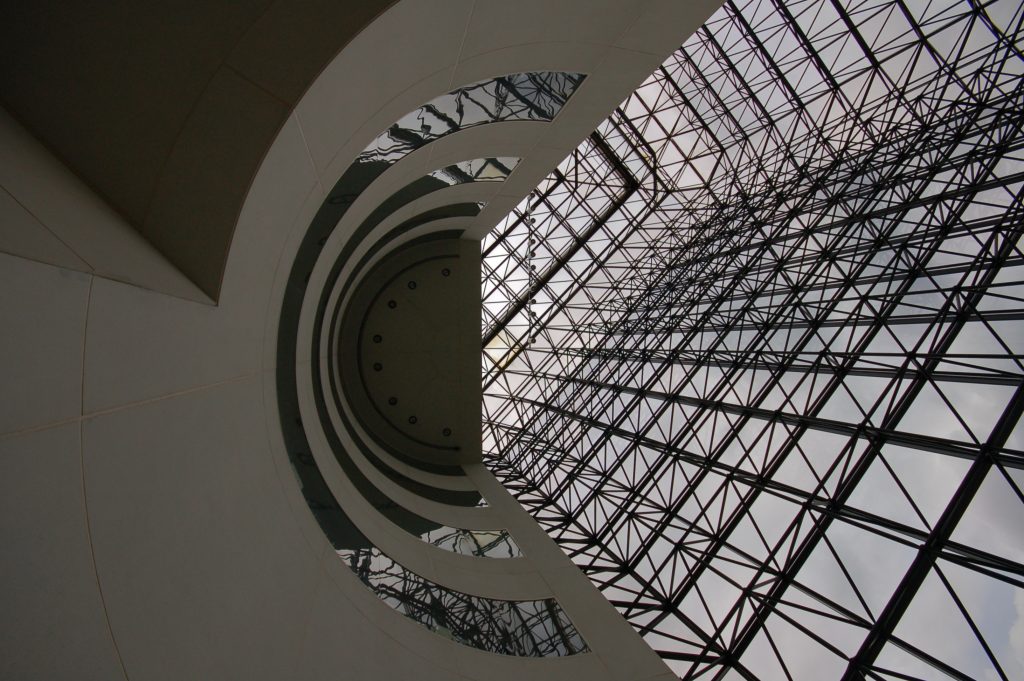 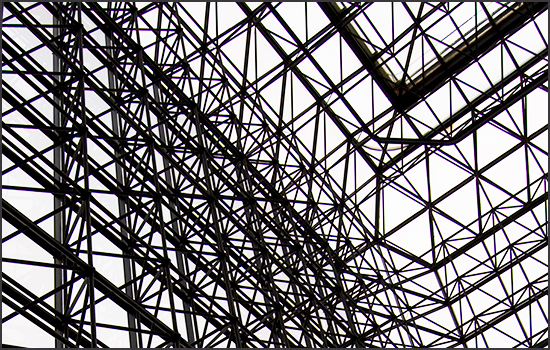 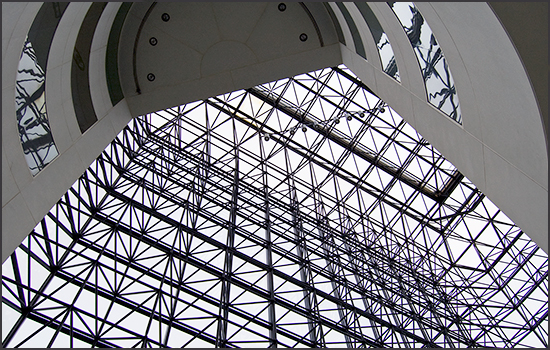 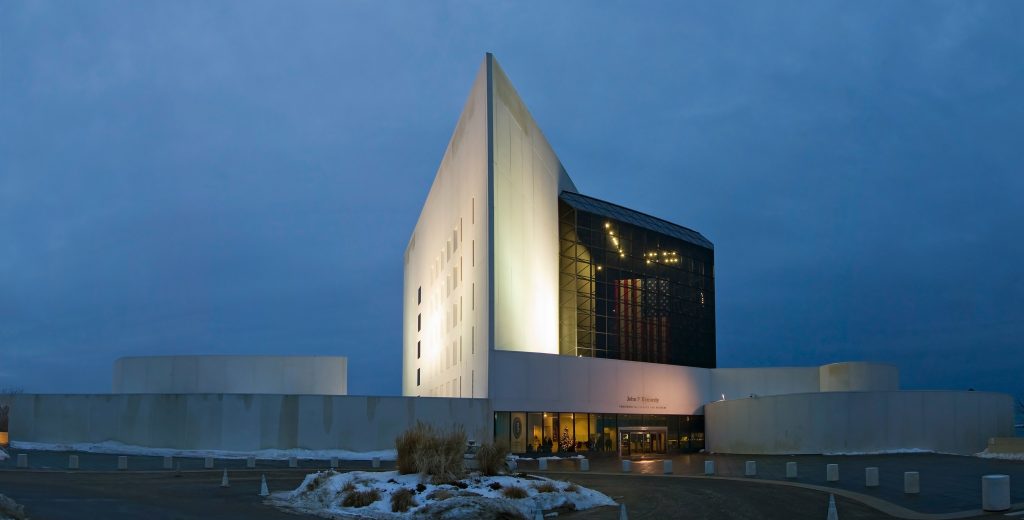