Josep Lluis Sert was commissioned Joan Miro, contemporary artist and friend of the architect, to design a building to house and closer to the public and scholars interested in contemporary art and his work. The building that houses the Miró Foundation was launched in 1975 and its style of composition dominated by the rigor and the abstract language.

In 1986 he made the enlargement works were made by Jaume Freixa along the lines already marked by Sert in the 70’s.

The Miró Foundation was projected on a site in the Montjuïc gardens, provided by the City of Barcelona, who also took part of the cost.

This location was chosen by the artist and architect, among several proposals from the city. It took into account the characteristics of the park and its proximity to the historic old city, some museums and restaurants, which are communicated via cable car at the time. It is located in one of the oldest corners of the gardens of Montjuïc, Av Miramar s / n, Barcelona.

Maeght Foundation, built by Josep Lluís Sert in 1964, in St. Paul de Vence, served as a model for the program to follow at the Miró Foundation. The architect used the experience gained in the construction of that building and Aimé Maeght advice in regard to organization of shows and features that should meet the space to carry them out.

The clarity of forms, proportions employed sound, high ceilings, indirect natural lighting and the correct spatial arrangement designed to facilitate the exhibit and the contemplation of the works in the museum are the conceptual characteristics of this unique building. 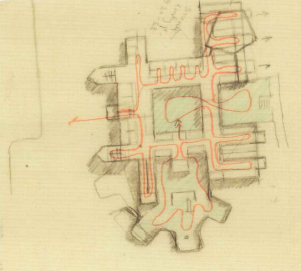 The study center and exhibition halls for contemporary art have several spaces to encourage such activity, places for meetings, conferences and shows.

The Foundation is composed of carefully spaces provided and a variety of forms open, high ceilings and light. Several volumes linked by a continuous and well defined circulation.

The movement is one of the factors that determined the layout of the spaces when doing the project, create a route so that visitors do not have to cross twice the same spaces.

The internal movement extends to patios, gardens and decks accessible, these are also becoming exhibition spaces, mainly for sculptures, ceramics and mosaics.

It is used to maximize the natural light that penetrates through the skylights and windows overlooking the patio. Artificial light is placed on the same points as the natural light, trying to mimic its effect.

This consists of several all-white rooms are distributed centrifugally around a glazed courtyard, a central courtyard by way of which we can see in the “impluvium” Romano, in the medieval cloisters and palaces or houses in Catalan responding to a typical Mediterranean model. Within the same plant there are several levels connected by ramps. These spacious rooms with high ceilings are closed on the outside but open inward so that there is always a spatial and visual contact with the rest of the set.

For sculpture exhibition hall in the Sert workshop designed a wooden pedestals, painted white in two sizes. Consist of a closed box by four sides, with a partition in the center that closes the gap and allows various combinations, depending on the size of the sculpture.

As to be making the journey through the different rooms the visitor is approaching the end of it until you reach a ladder going down to the level of the input and from which you can see a courtyard that has not previously been possible to observe.

It develops into a curious octagonal tower, took formal element of Catalan architecture already in medieval times and especially in the Baroque bell had this type of plant. In this tower located Sert to an auditorium for 200 people on the ground floor. On upper floors there is a recorded file and library that receives plenty of natural light, which was designed special furniture, also has a regular exhibition hall.

In the basement galleries are used as a deposit from the work of Miró, both particular and which he donated to the city of Barcelona.

The courts reinforce the intent of the architect to ensure that the building is a living object, are designed so that they make celebrations, conferences or any other event, especially the backyard, opened on Barcelona, with a fountain and cascading waterfall.

This is an extension of the square which gives the main facade, with a concave face and broken that gives it an urban character. This face expresses the architectural ideas to revitalize the city Sert:… “We have put together different types of buildings instead of grouping them into similar types”…. “Destroying the modular repetition where useful to increase the interest”…. ” Take the main points of access to the center of the project rather than to its periphery and to get people’s movements are situated in the most vital areas… ”

At the main entrance of the Museum through broad access ramp.

It is made of reinforced concrete. The floors are made with small barrel vaults and domes edges of these rails are recessed outlets. The upper rooms have a half barrel vault to allow light to reach the highest points.

The core of the work consists of a square courtyard that serves as a link between the two bodies that make up the structure.

In this project Sert repeats many themes and tested at the Maeght Foundation, although the containment in the colors and materials used in finishes help the building is perceived as much more unitary.

It can see certain elements from the Catalan vernacular as flooring or ceramic interiors red, white, the arches of the roof or wooden slats of the stairs.

The material used is concrete, treated in a manner that appears white and where the traces of the forms are reinforced precast grainy surface.

Apart from stairs and ramps, the museum has an elevator adapted.