Seeking to harmonize with the landscape a building with soft, rounded, biological, almost animal forms projected. Its stainless steel outer skin follows a perforated pattern creates a modern surface inspired snake skins and Korean dragons. At night these holes are on, come alive, the light moves along the surface.

The design of the Museum of Prehistory presents the visitor with some visual themes to complement the archaeological material inside. In addition to the organic shape of the building, reflection is an integral element, if not dazzling design. The glossy exterior stainless steel reflects the local terrain and its changes as the day goes on, making your contribution to natural and historical landscape. Integrating the Museum in the historic site, the architects wanted to give visitors the feeling of being part of a unique history and are not just passive observers of the past.

Among the curves and bends of the hills Jeongok, in the region of Gyeonggi-do, South Korea, the volume of this museum is, between two hills and meandering River Hantar. The long, thin Museum flowing around the natural topography.

The site chosen is the greater Peleolítico site of Korea, why architects wanted to convey the details and forms of the structure itself, an awareness of the important role of the region Jeongok in human evolution. This site is where we found the first “Acheulian” hand ax in East Asia.

“We wanted to honor the river landscape that saw the birth of the first inhabitants of Korea, and recognize the beauty of the two curvy hills that form in the bend of the river. How these preexisting forms and geological chasm that exist within it are emphasized?
The project appears as an embedded bridge between two cliffs which can be seen from the distance of the highway.

We create roads, many roads around the curves of the project and the hills, because the roads built by the animals that came to drink the river, belong to the “first” landscape. We want visitors to experience an experience, experience the primitive humanity and entering a different everyday world, closer to the landscape of the building.

Inside, the project seems to be made of the same material, an archaic and primitive stuff, like he sculpted the hill itself. From the highway, the museum seems like a strange and intangible volume, which glows softly. Parking spaces disappear under the trees in the eastern part of the site. With the new trees, the place gets its original ecosystem “(X-TU Architects).

The tubular stainless steel building is buried in the ground while an external drilling pattern mimics the texture of the skin of snakes. The glossy exterior is designed to reflect the surroundings, with its colors and changes. At night the inner light shines through said perforations. Outside, the landscape has been restored to its original state as a natural park along the river.

Inside, futuristic shapes, colors and textures, the museum features exhibits a continuous loop, as well as spaces for education and activities, designed as open space to recreate the scenes of the first men.

Its designers have expressed… “time and metaphorical concepts we like to assign, also played a key role in building design, both inside and out….”.

The main feature inside the museum is the “Great Walk of evolution.” Visitors follow a long line printed along the ground to guide them through the evolution of man in the region of Jeongok. Lights in motion and projections are integrated into the route to evoke a sense of participation over time. Moreover, the museum entrance and exit are at opposite ends of the building to promote a chronological and fluid experience. Externally, the flow of time It is hinted in the movement of the lights through the exterior wall of the building, including the building itself seems to flow outward like liquid metal.

The area of ​​preparation and presentation are at the same level, including access to halfway. Through a staircase leads to the reception, exhibition area, cafeteria, conference room, classroom teaching activities and multimedia laboratory.

In the basement the Museum of Prehistoric Jeongok houses a multi-purpose auditorium with 200 seats and a special exhibition hall, which will serve to provide a broad space for culture. These facilities will serve to create a new cultural hotspot in northern Gyeonggi lack of cultural facilities.

Internally coated by a peripheral wall that changes its forms, thickening, decreasing, according to the function that develops in that area of ​​the structure, plumbing, ventilation, electrical, audio and sound, storage, concealing or opening the spaces, similarity of the caves in a remote epoch, which pay homage.

The Museum of Preshistoria avoids the traditional museology, spaces were designed for visitors to interact and explore the exhibits scattered throughout the interior space, either on the islands or wells posed on the ground or in the niches of the walls.
With this arrangement, users create their own path through the museum and meet exhibitions in a less structured so that if they do through windows located one behind the other. This floating arrangement exhibition seeks further accentuate the impression of constant movement through the past Jeongok.

To make the structure offers the appearance of a reptile, its outer skin is made of thin vertical sections of stainless steel with perforations that allow the passage of natural light during the day and at night reaffirm the presence of the way through light moves through its outer walls keeping the pulse of the museum as if it were a living creature in question.

The perforated metal wall includes double glazed walls sunscreens designed to preserve the interior and works of heat. These windows can be controlled according to the needs of different exposures.
Inside the double wall system maintains a constant temperature and efficient. 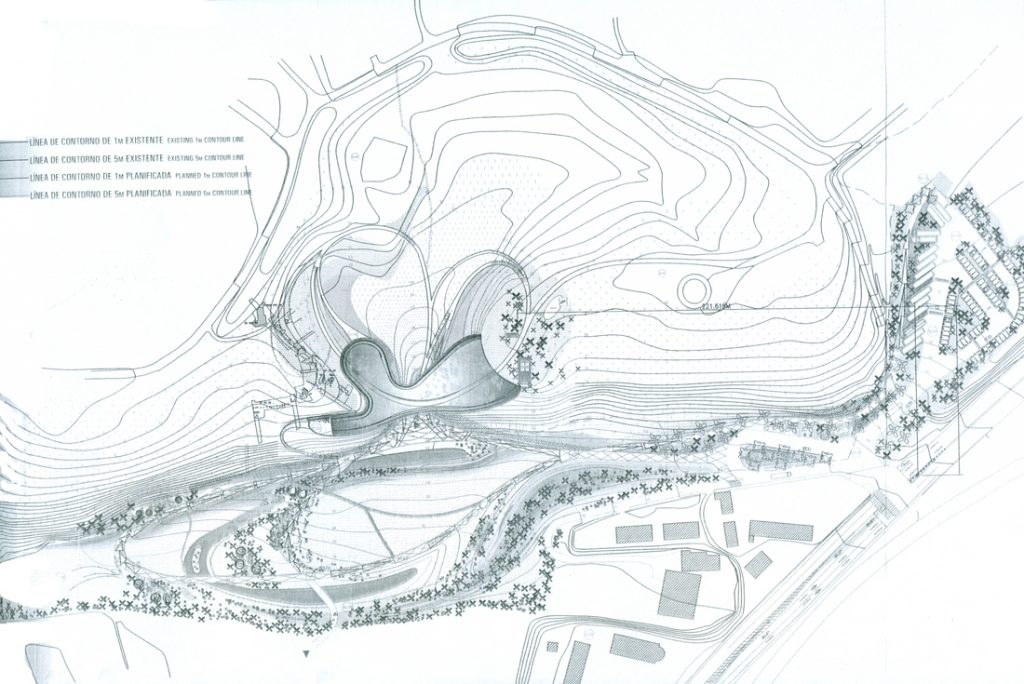 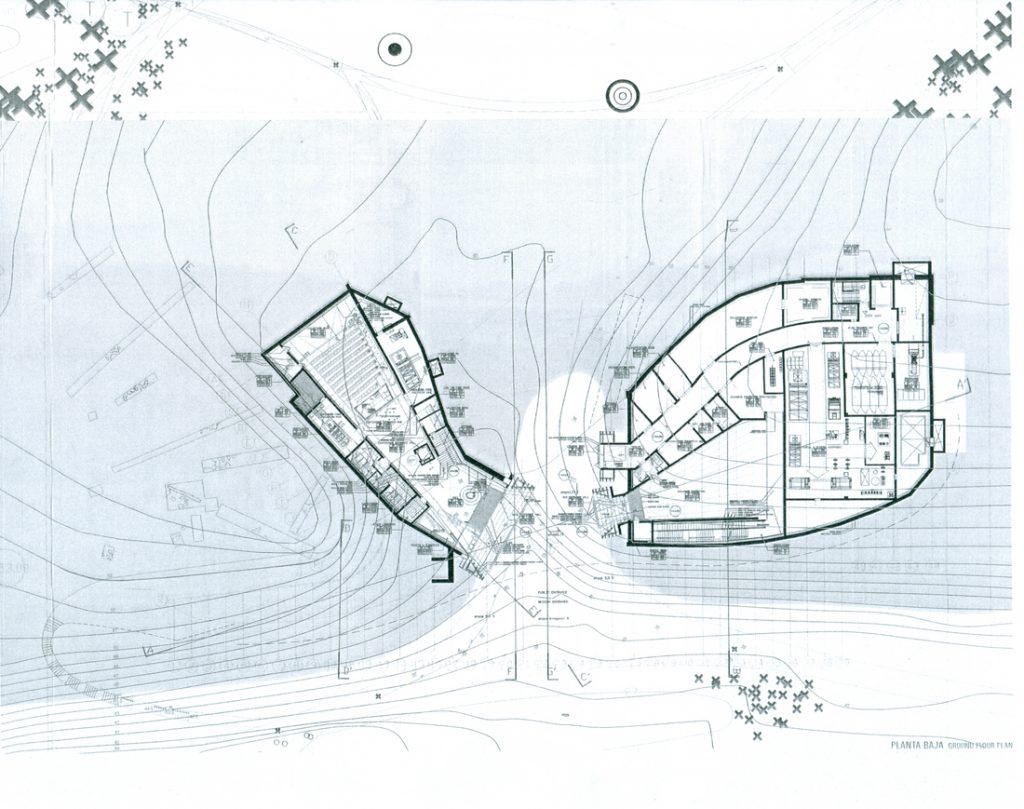 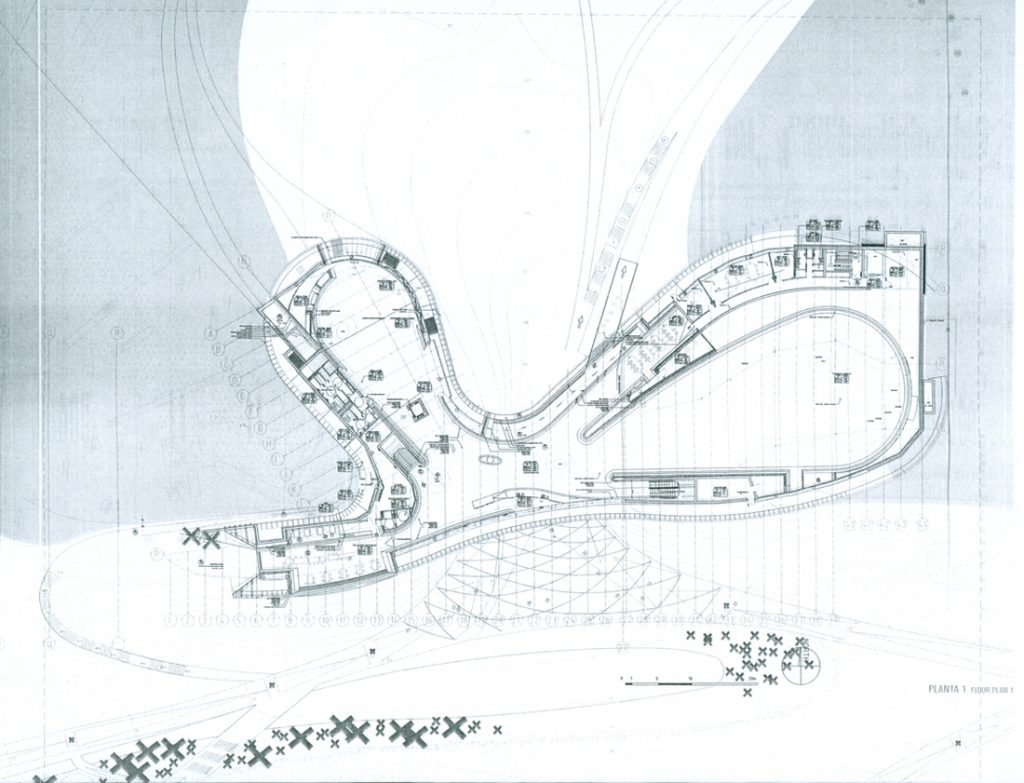 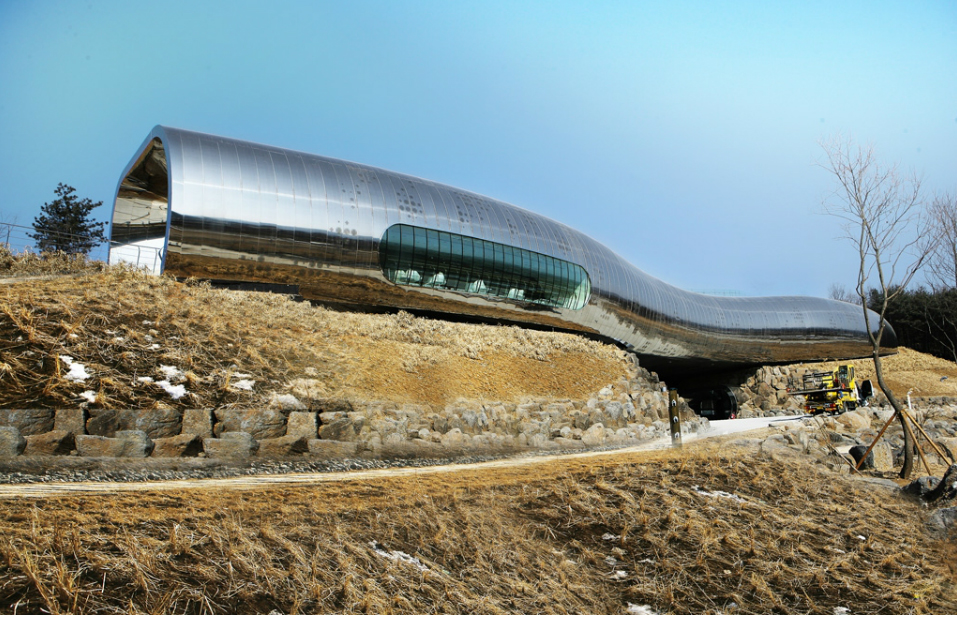 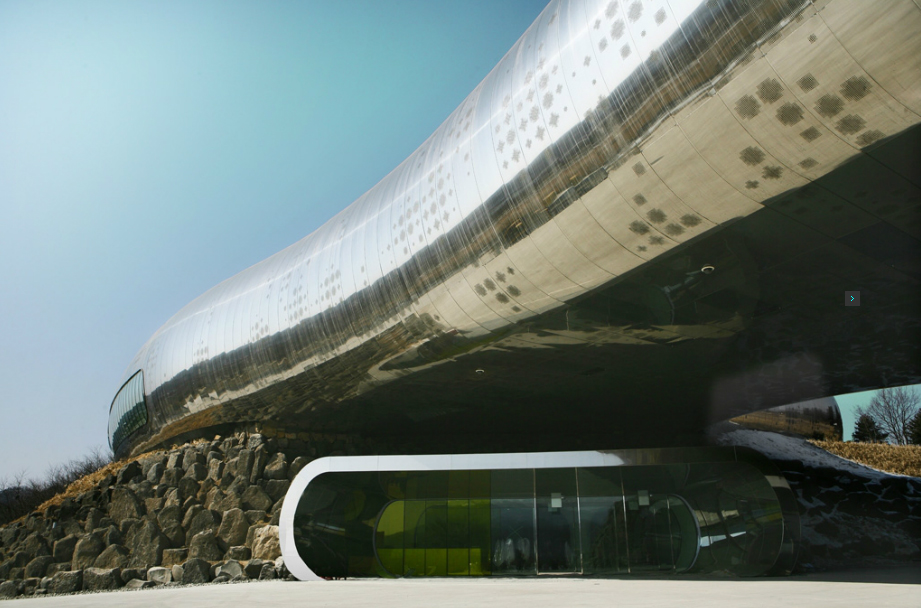 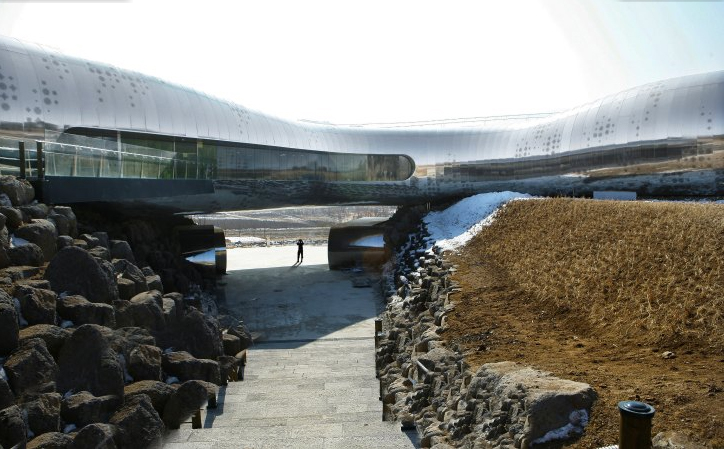 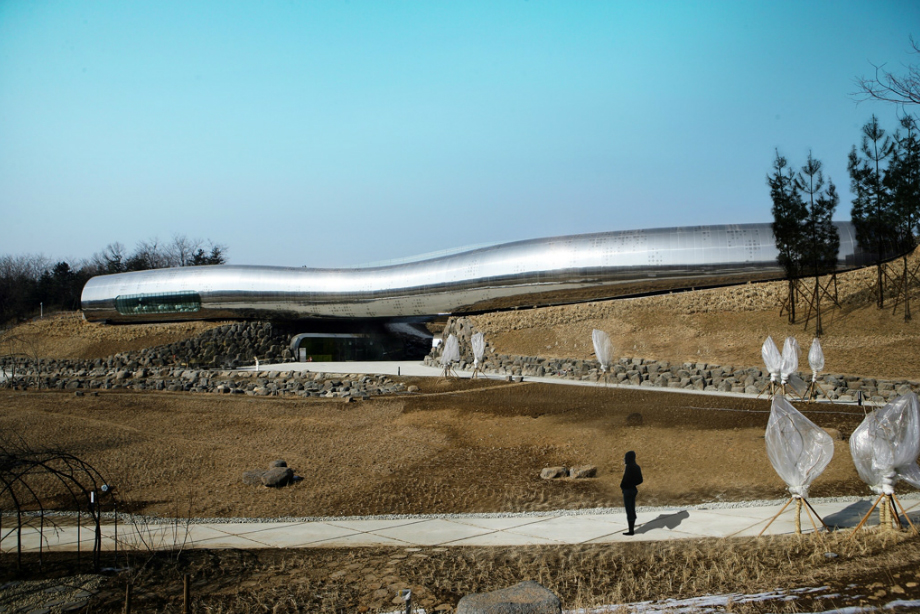 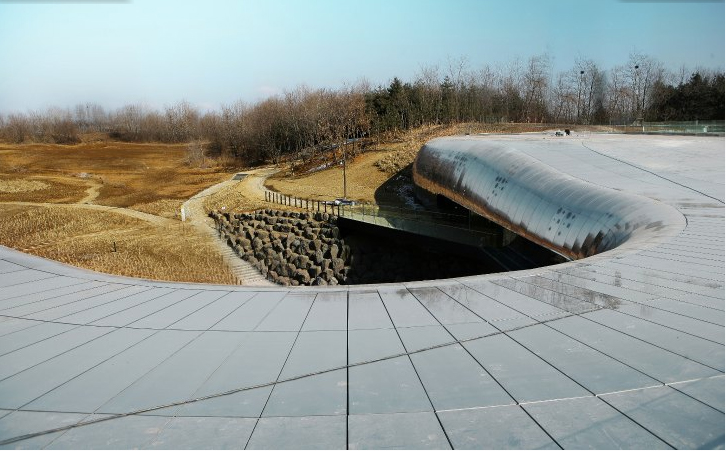 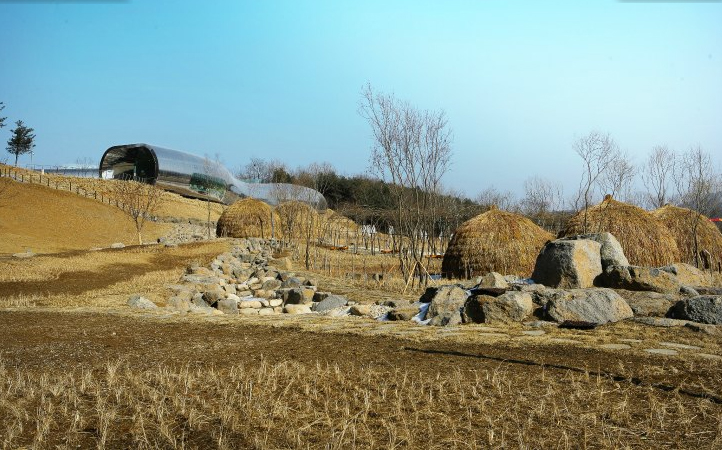 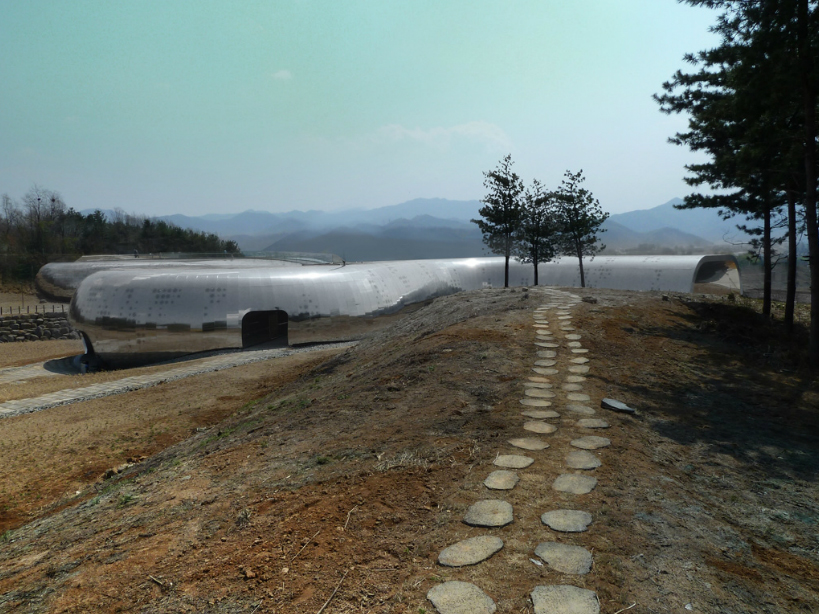 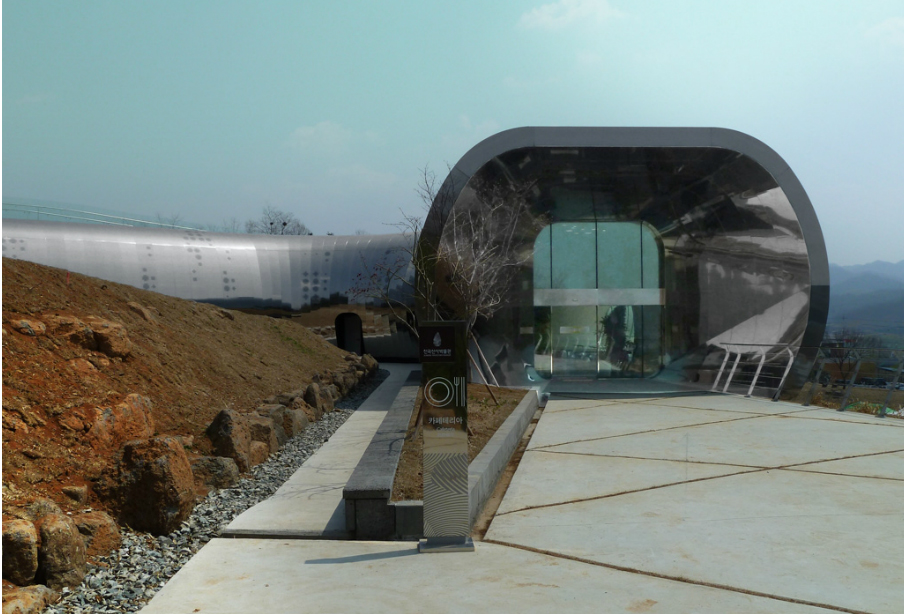 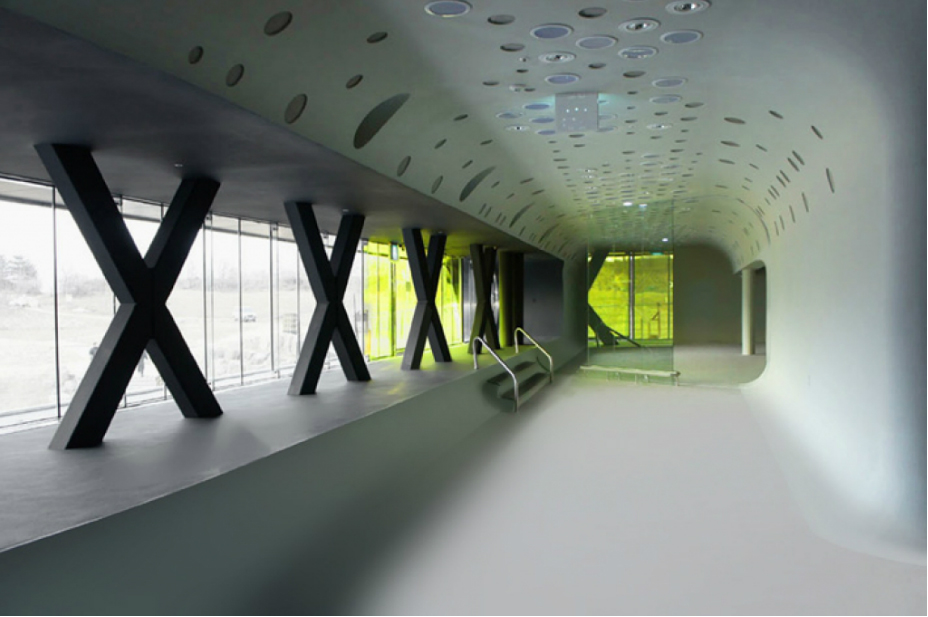 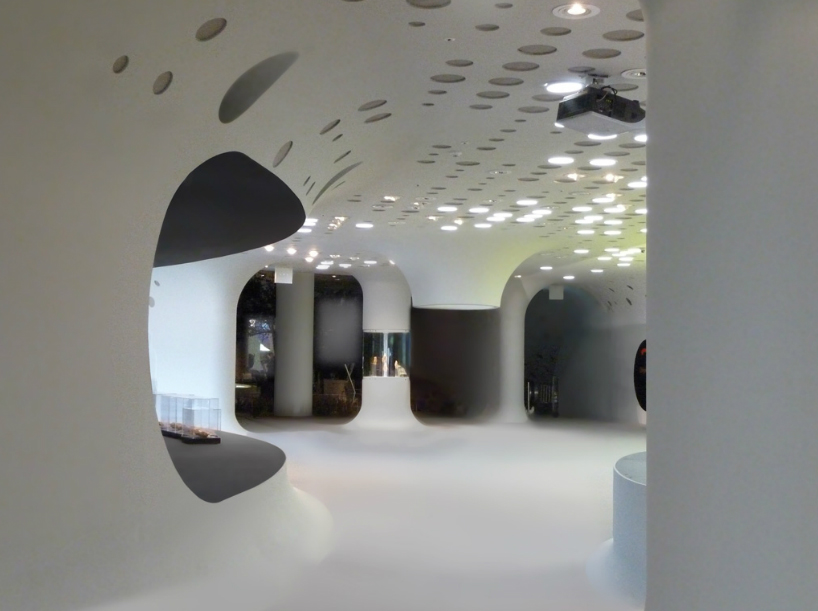 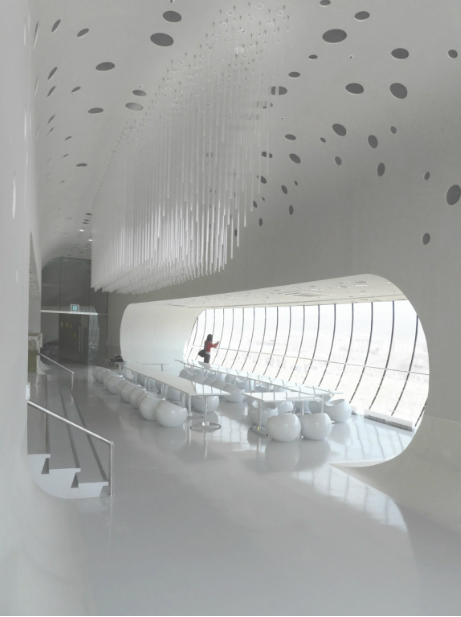 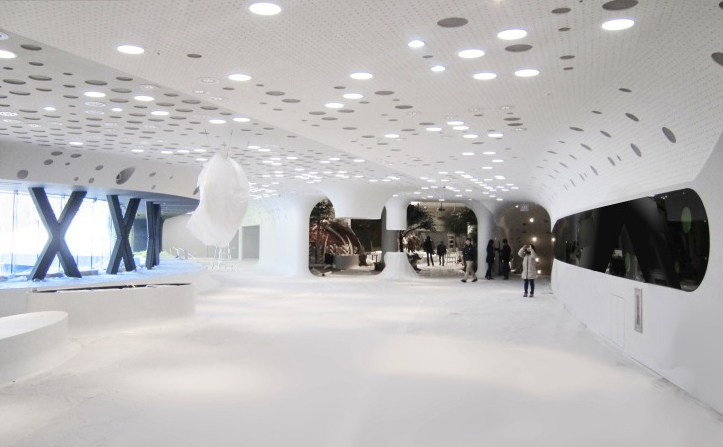 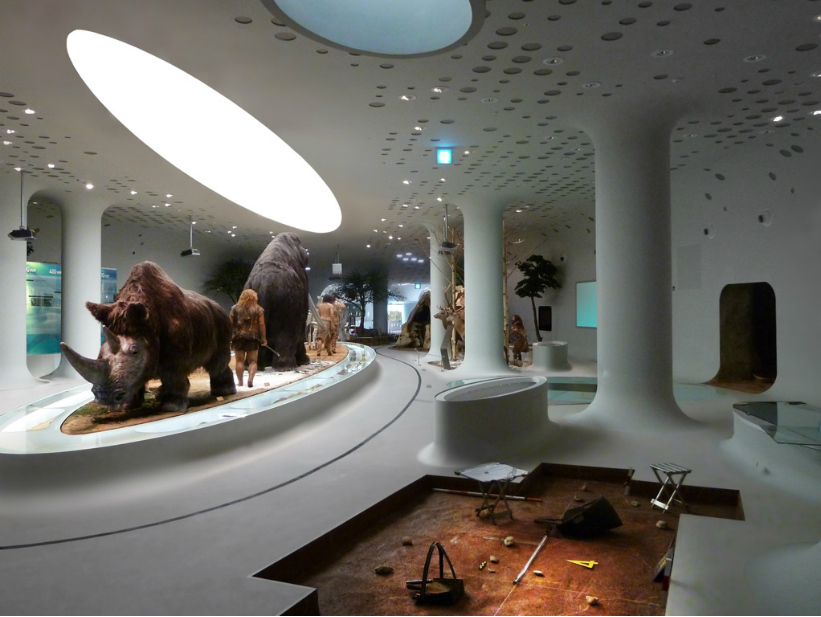 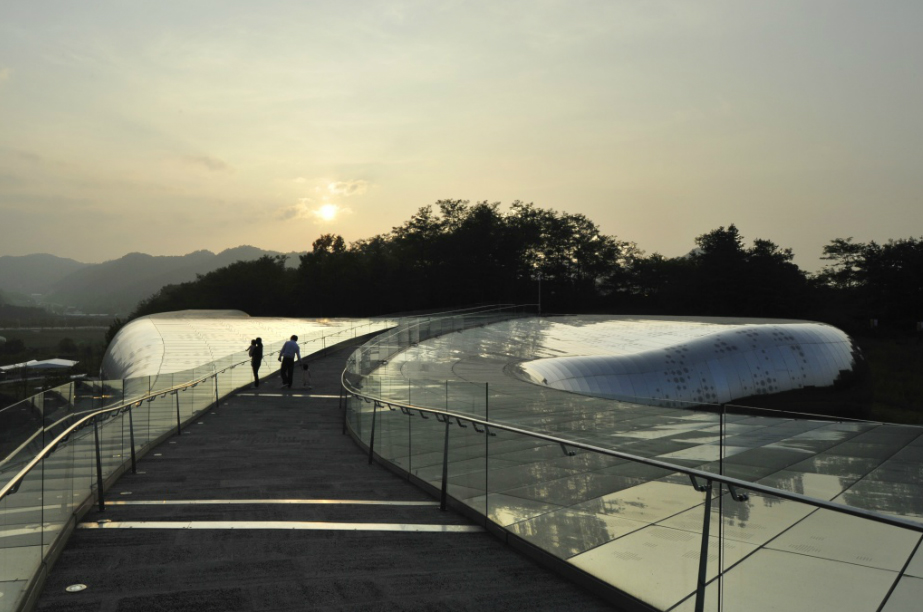 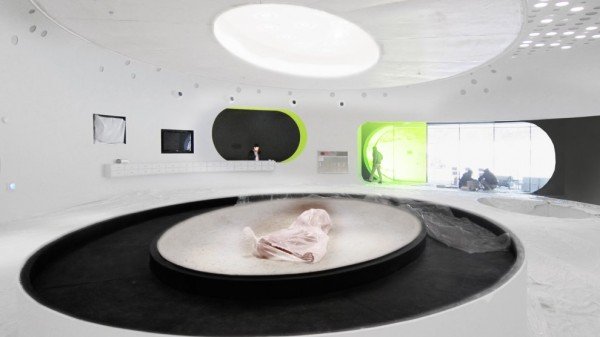 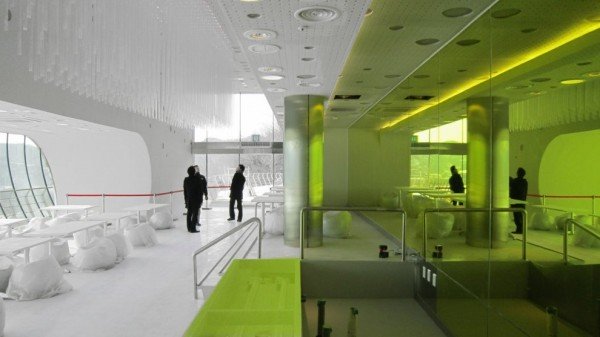 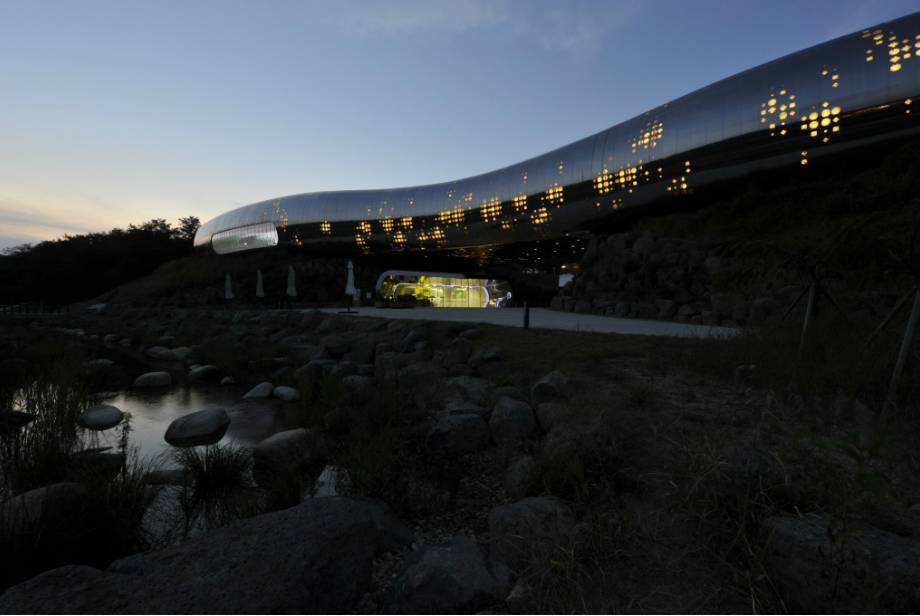 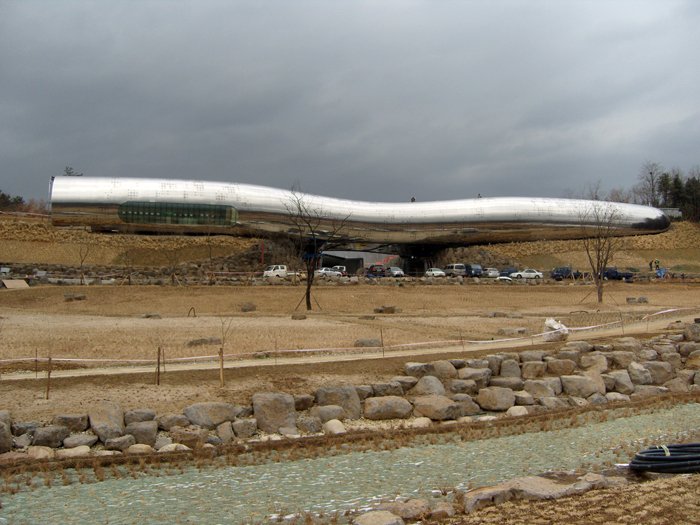 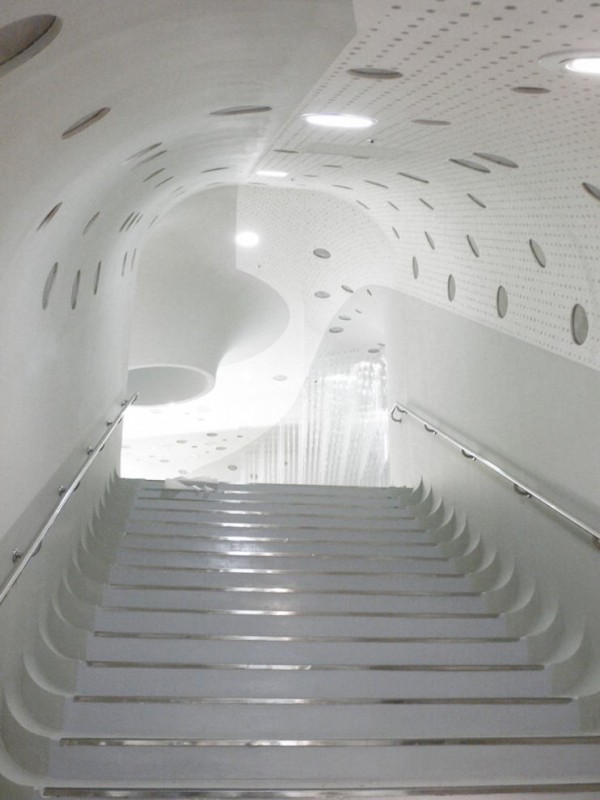