The architectural style of conference centers is one of the less pleasant than was produced by the global economy and culture.

Places too large, removed from city life with the risk of becoming a “cave”, no windows and indifferent to context.
The CCIB is a project of Josep Lluís Mateo whose intention is to represent an exception.

It seems typical of the place on which it rests: the front of the south bank of the River Besòs.

Up to half of the twentieth century this area was an almost formless, almost primitive, “the barracks Somorrostro” (the Somorrostro cabins) directly increasing the sands of the beach.

Several decades later, the same place that would lead to regular prisms, geometric one of the most popular residential districts
Barcelona.
The CCIB born in memory of this place: comprising almost a mass of magma type hardness presenting geometric parts of the building.

This is a set of objects with different users and programs, characterized by a predefined pattern of “functional bands” necessary for
diversity channel within an area of ​​70,000 m².

Two “hard” volumes increased northward toward the center Diagonal Mar, a hotel and an office building cut in the level of the thirteenth
floor public terraces offering a new scene.

The conference center itself is a covered square: south, the facade is a front metal organic continuous wavy, smooth socket.
The interior of the home of a large living room, an exhibition area for multipurpose sample that may contain up to 15,000 people.
Large areas could be trivialized or destroyed the value of the BCCI, but the quality and technological tectonic involved make
one of the best buildings built in a Mediterranean landscape of Barcelona.

The International Convention Centre of Barcelona include a large hall (15,000 square meters, 80 meters span structural) that can be divided and associated services block overlooking the sea.
The living room is both the structure and abstraction, talks outside block sea and sky.
The structure is a reference musical score.

The climate, the light (and the opposite, the shadow) and sound (and his silence), have shaped the plot.

Flows (of people and liquids that are similar), the masses and the architecture that appears (and often) disappears in the middle of them.

‘Organic against inorganic: A story about the site‘

1. – The contemporary history of human settlements in this area has two key stages: the first, in the middle of the last century, when human presence is Freek, as a result of the urgent and precarious individual energies, which adds to the sand the beach as a thin layer hardenning it. It is a uniform, primitive and unstructured body-very reminiscent of the settlements of the popular vernacular architecture. Those are the legendary Somorrostro huts.

2. – Soon after, as a result of the brutal forces and powerful, pure and crystalline geometries colonize the territory. Following the volcanic eruption superhuman, organized a series of prisms following certain rules set the territory.
This is a mineral, inorganic, rational world, in parallel with the pure organic nature of the world’s vital sea.

This is the inorganic world (then) Southwest Besòs real home, one of the best examples of this period.

3. – Our project has worked with this memory. Our initial proposals, produced on a larger scale, is trying to understand the constructions to build a mass, as a filling magmatical land topography and crystallizing in some particular points.

The hard and horizontal geometry of the occupation, as a meeting point connection between the site and its origins.

This is the typical time connection between juxtaposed realities that characterize the contemporary city, the border between the city and nature, a place where historical sketches (the end of the Diagonal and the old road that runs parallel to the sea, the street Taulat ), social housing neighborhood in the South-West farm Besòs, built in the 1950s with his geometric abstract design, the new urban development of American-style housing blocks in the center Diagonal Mar Park, which dates from the 1990s, large technical infrastructure and, dominating all, the sea and the mountains south of the Cordillera prelittoral north, the friendly presence of nature that are not so common in the city.

“Our world today is characterized by the coexistence of different realities, often forces us to perform at the border, at the meeting point of diverse realities juxtaposed. In our world, the border is not an end point, no more Finisterres or land of extremes. In our world the limit is the end of something and the beginning of another, is a connection point, a movement. This is a popular place for the contemporary project. ”

‘The diagonal not over‘ +

Diagonal Saying that flows into the sea is a vague statement.
The Diagonal does not end, it becomes a much longer line – the old road to France, parallel to the sea. Our entire project had to take this direction as the basis of its geometry.

Our showrooms are covered, protected part of this public space, we expect to continue in adjacent plots.

‘A convention center is…‘

… the typical non-contemporary place.
They are large spaces, in this case some of the largest in the world, designed for brief use, ephemeral, where flexibility is not limited to producing expressive architecture, tending to absolute garbage.

It arose in opposition to the conference rooms sculptural the 1960s, which were considered too expensive, determinants and rigid, and are characterized by infinite potential, mixing flat hierarchy trade show, meeting and catering services.

The ideal model would be a space that could at any time a host of these functions (or all at once) at random, and the hiring or expansion at will depending on the number of participants.
They also differ from their historical precedents to be very large – that is, they must be able to accommodate any mass event (from rock concerts to championship boxing).
They are spaces of architecture trash where all that matters is its use. They have to be cheap. Their profitability is more in the induced effect they have on the entire area that the influence which produces internally.
Even in the U.S., where the model originated, developed public. They are, however, sophisticated buildings in relation to environmental conditions. For example, its acoustic requirements are very important, nothing can be done at any point of them, regardless of what is happening in their surroundings, climate, and also have to ensure comfort conditions at any time and in all points.

The ideal model is a conditioned artificial opaque box next to a highway, near an airport, surrounded by hotels and offices anonymous. Therefore, one of the prototypes that have been consolidated by the influences of globalization first. It is clearly a generic project.

Our position in front of these data, was ambivalent. On the one hand, that inspired anthropological fascination of these places that are set to use the pure expression, movement, activity – a line of work that many of my generation have been supporters of the address.

And then the distance and disgust to see the difficulties that the experiences of contemporary architecture in shaping meaningful to these conditions. In proposing new architectures, exciting and intelligent response to the new conditions of use and consumption.

In fact, what this book describes the attempt to transform the actual architecture, solid, specific, easy to remember, gaseous phenomena that have no physical presence, that she would not leave without a trace.

All (A) north, which includes buildings to complement the Convention Center (hotel, offices), had to be more urban, inorganic minerals, hard.
Set a limit, a wall, but it has to be open.
The high elevation called by the potential of many possible interpretations continuously as a front in the street, volume and open at the top, in view of the city at a distance, in the existing shopping center will act as a base.

Strip B (main hall) is basically a roof that covers an interior space, it had to be designed as a public space, like a large square that continues outward.

Gaza C (ancillary services to the main hall) is a conglomeration of parts that relate to nature: the sea, the sky and the mountains.

Until now, no way, the banding pattern (both functional and urban interpretation) suggests that the case for the subsequent design.

The image of the block south (lobby / meeting) emphasized the role of external and wild nature.

The image of the ceiling of the main room of what looked like an artificial landscape as well as a technical point of connection between the structure and flow of the facility.

The first view from the outside of the building facing the entrance plaza presents the large digital display, a moment of communication in the digital large container then silent.

According to the levels of the building regulations, the movements in the Gaza one reflect the various functional and promotion criteria that have been defined gradually.

The party forms a type of hard wall or edge which also had to be permeable, not opaque, and bring together the different scales of interpretation in a feature.
These are objects which become less visible at a distance (from the sea, from the diagonal).

From the street, a complex degree of transparency should be possible.
All this explains the development of the volume of the strip: how the fracture pieces in the upper part as intermediate incisions, the gaps between them, and the consistency of the skin, based on various qualities of light and trying to coordinate multiple languages.

The images of the main hall is to explore the conditions of space: its dimensions, its limits and proposed a grand opening. Also tested using the foreseeable events.

Advancing along the C means reaching a smaller, fragmented grain.
Organizing meant that further fragment into sub-bands in relation to movements.

The entire three-storey complex is stratified vertically uses (of the collective to the relatively private) through an underground base of services.

Strip 3 has to introduce light into the dark center.

The strips are coated with organic skins in connection with nature.

Tracks, gutters and downspouts are like valleys, rivers and lakes.

The front moves with the sea. 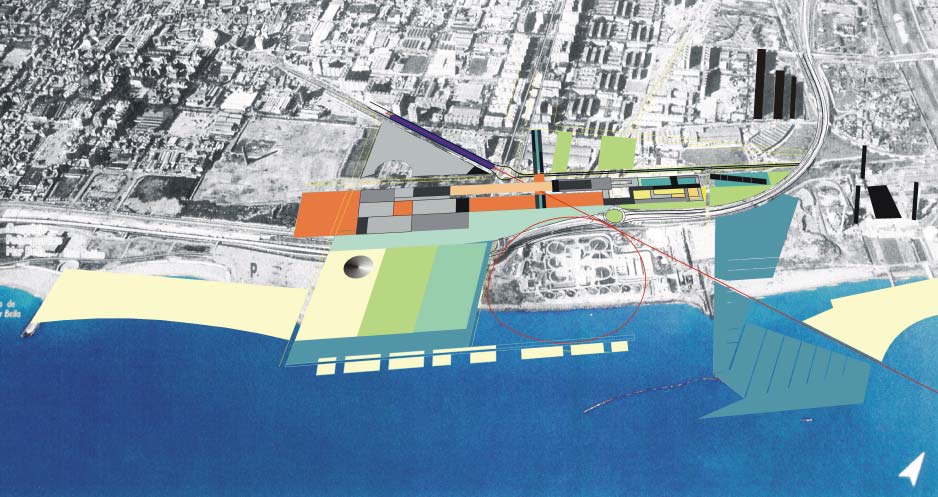 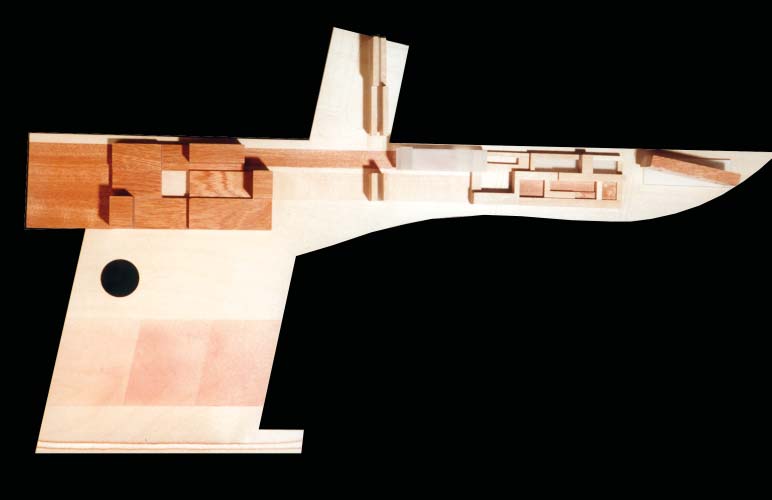 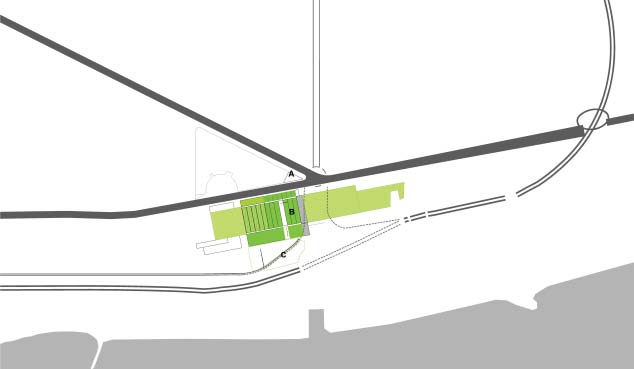 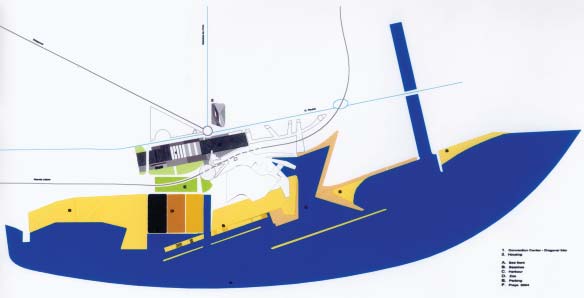 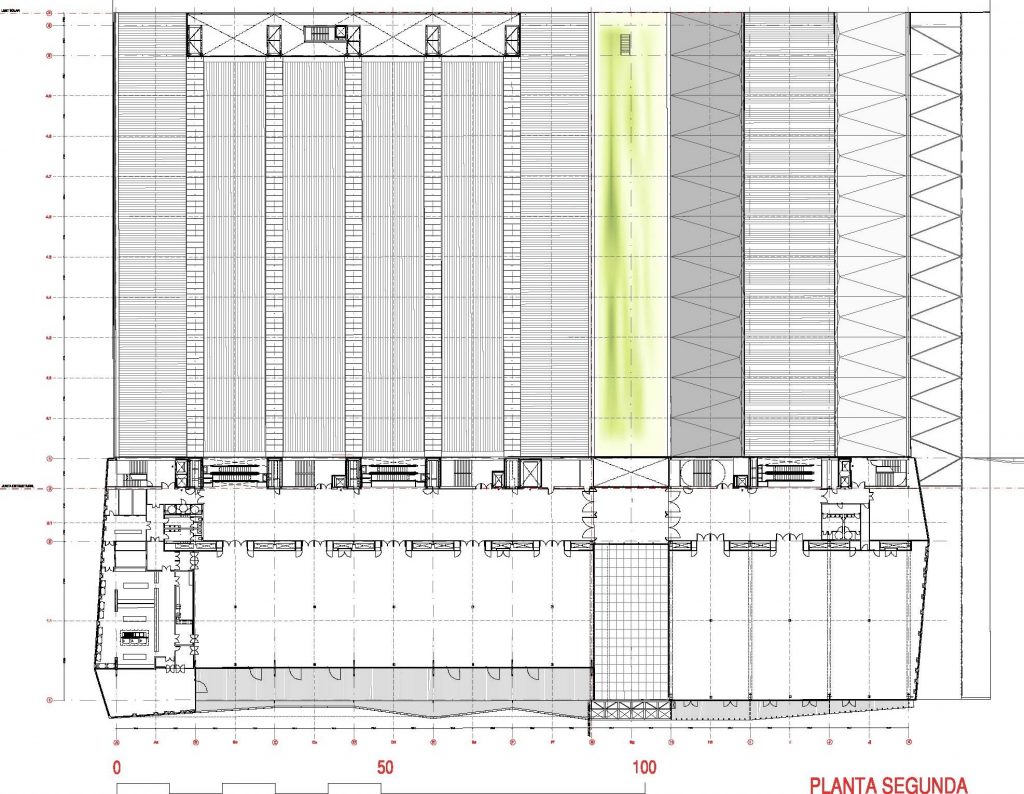 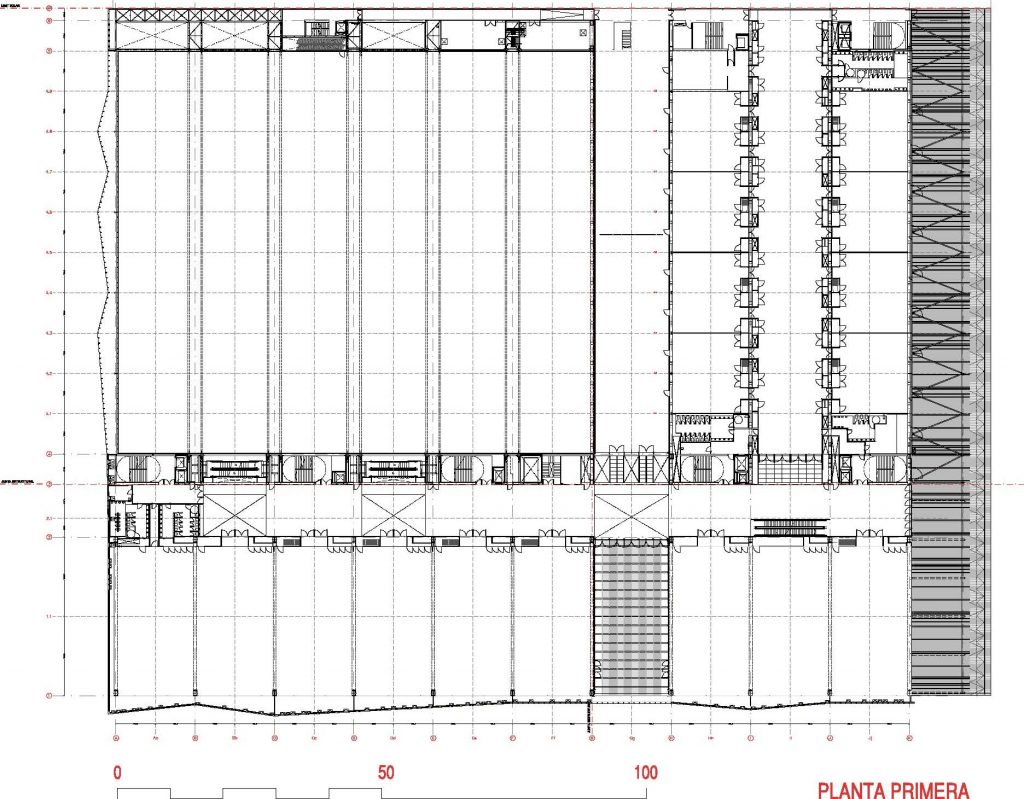 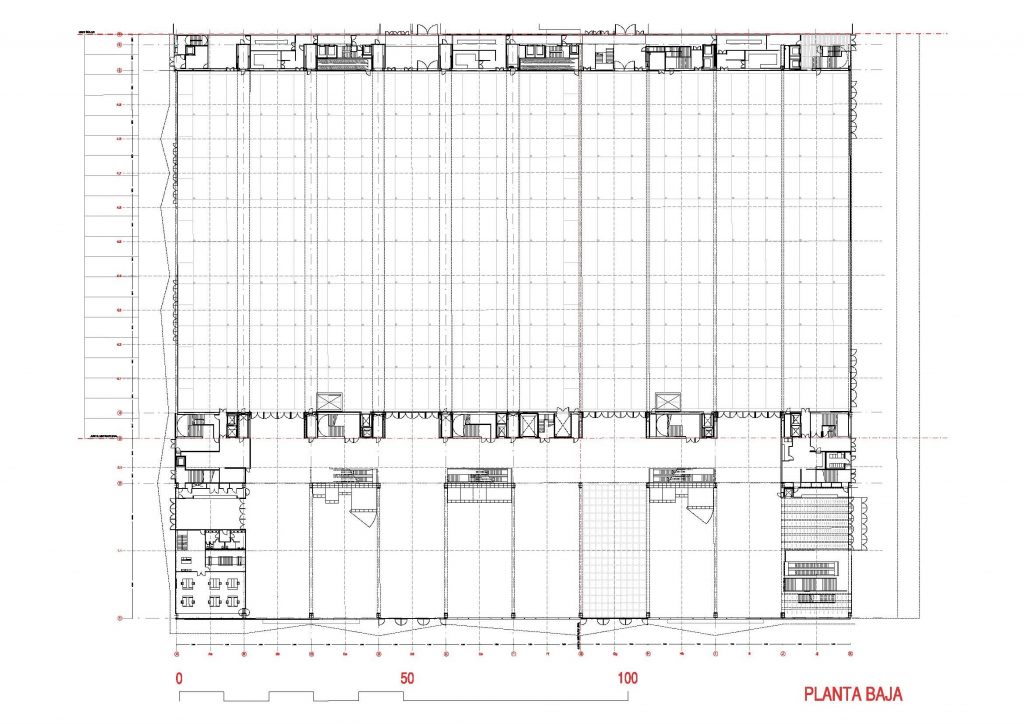 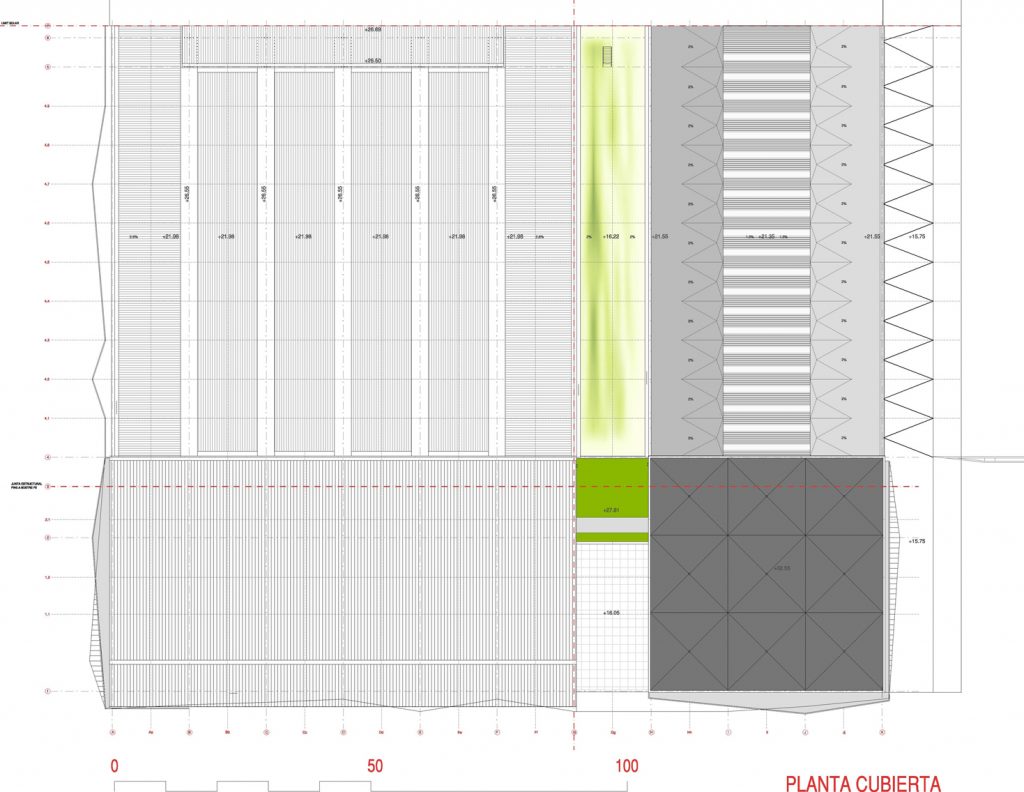 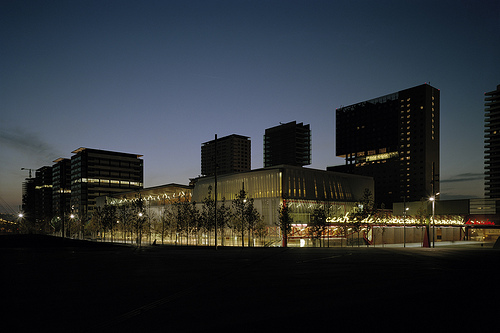 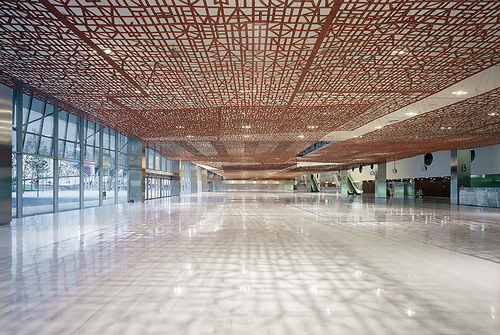 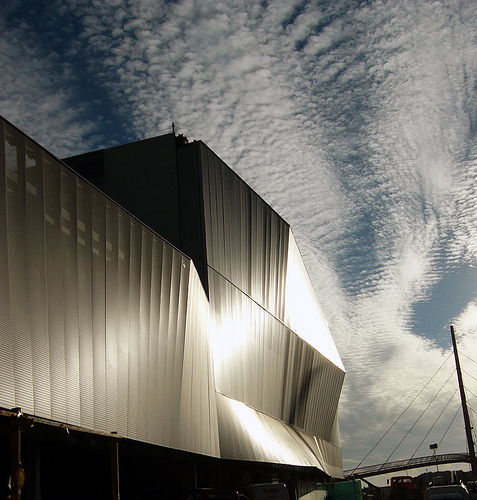 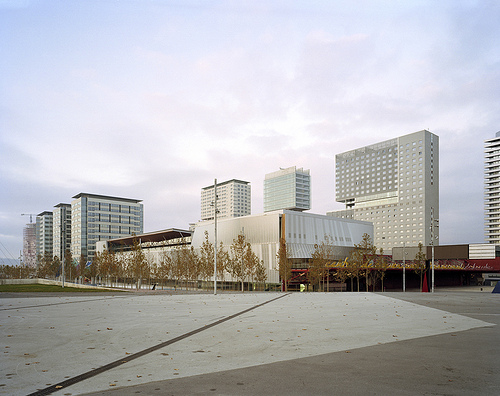 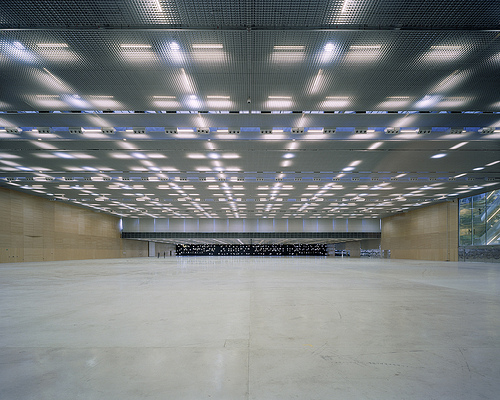 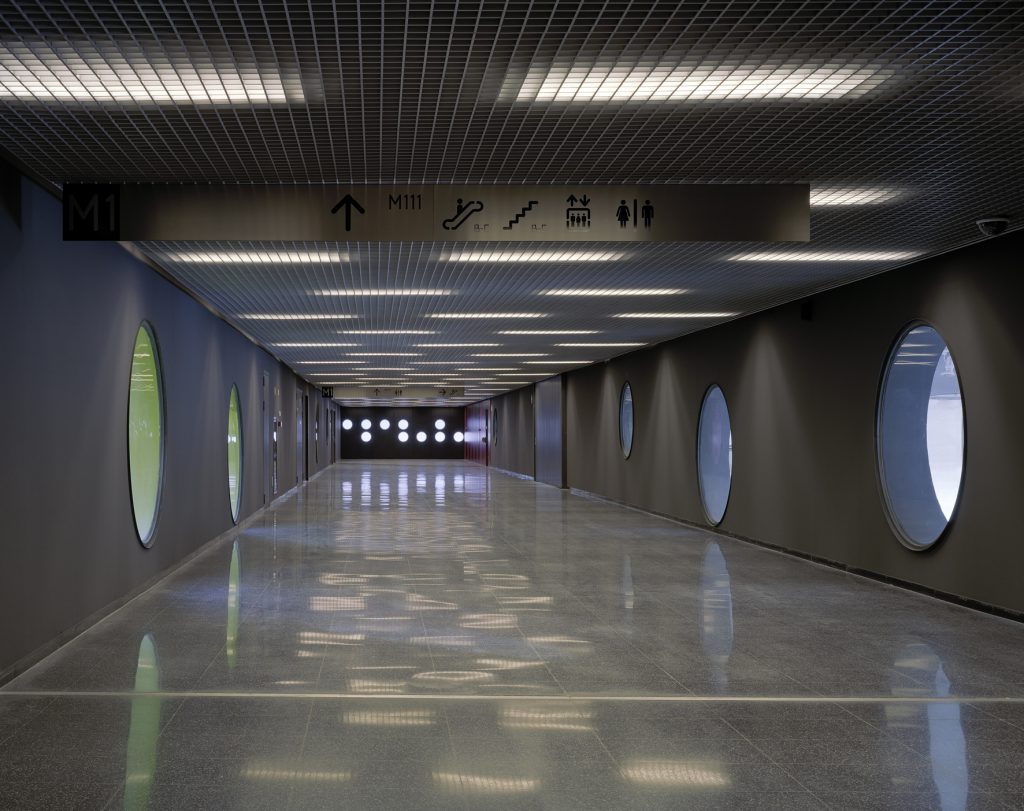 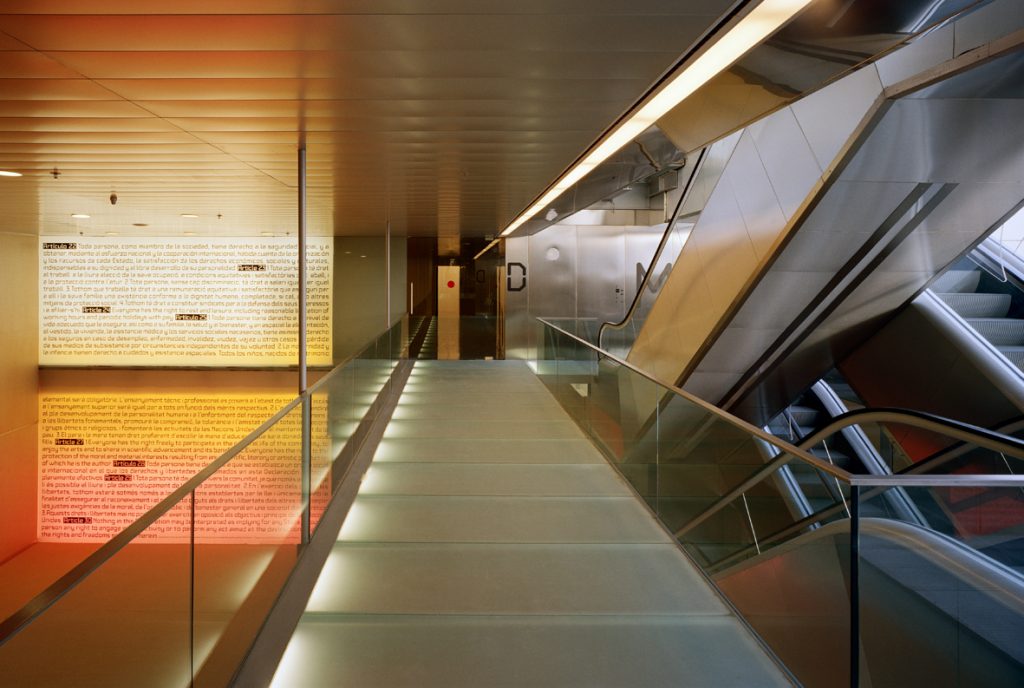 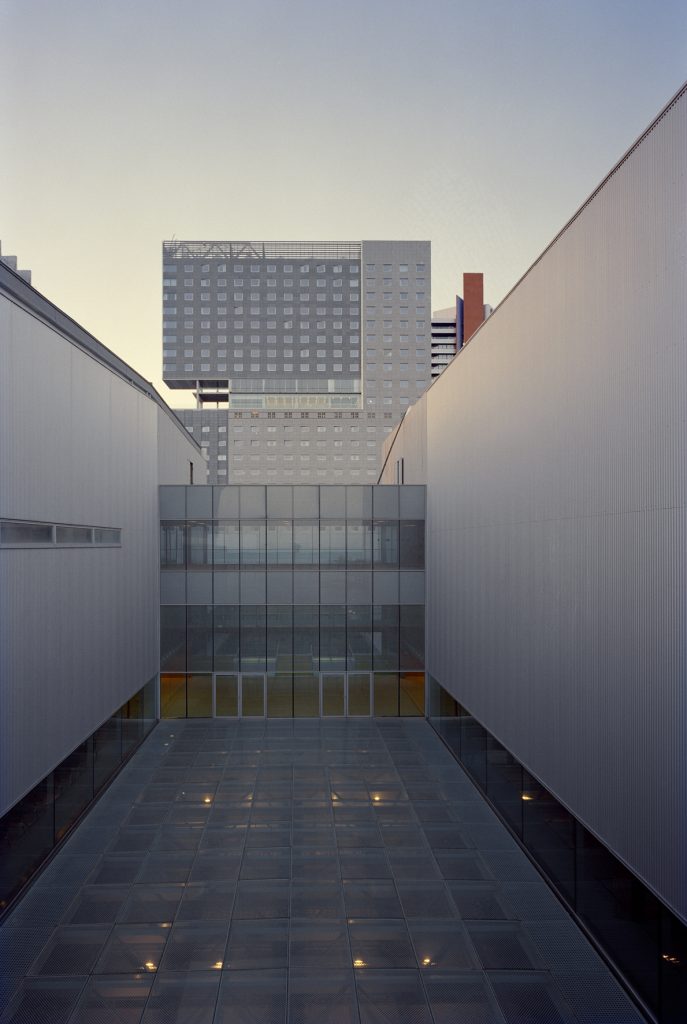 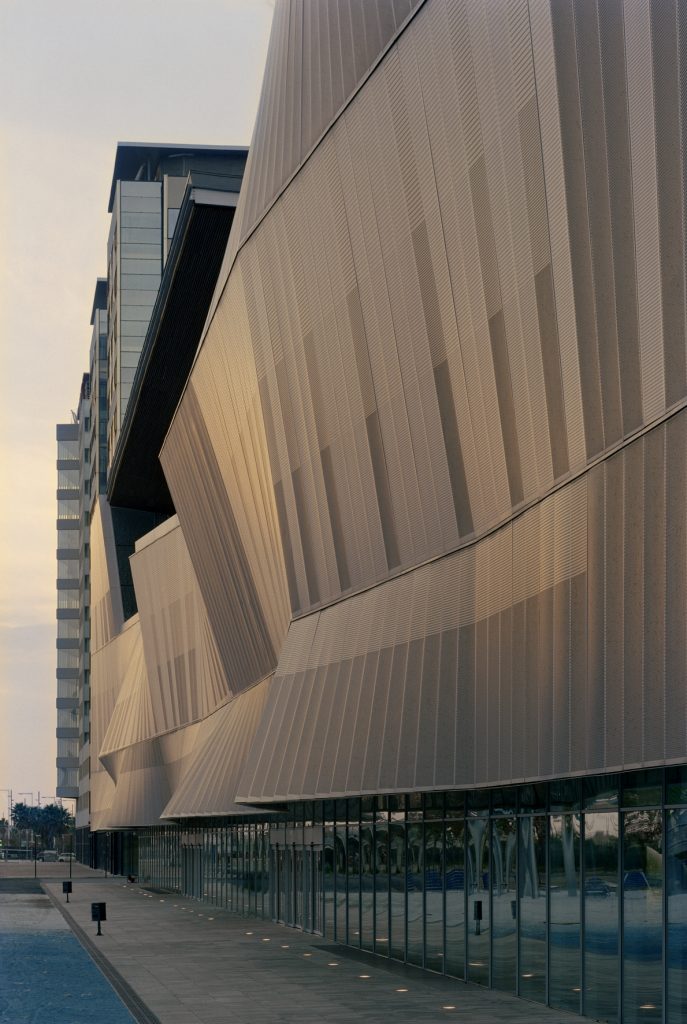 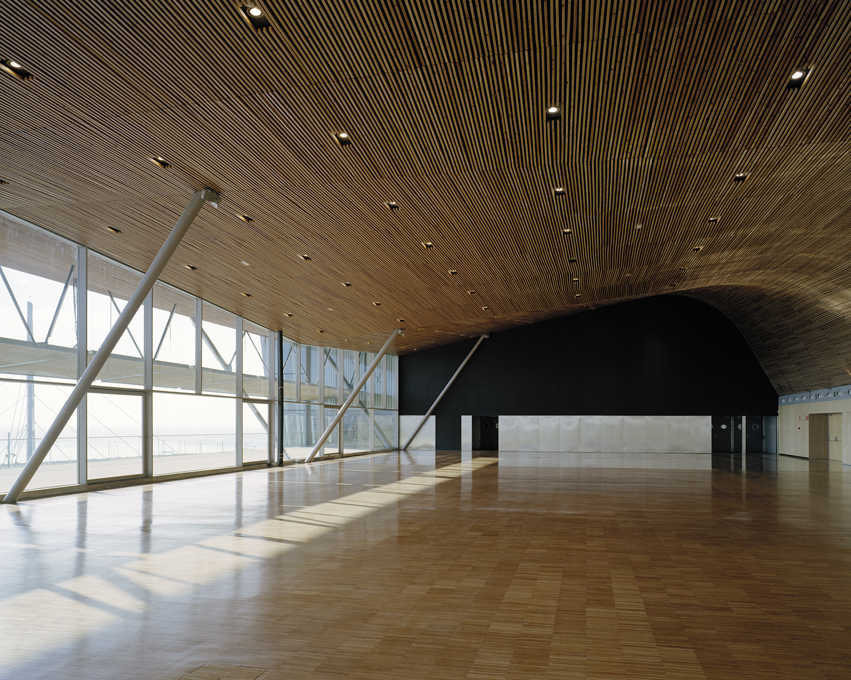 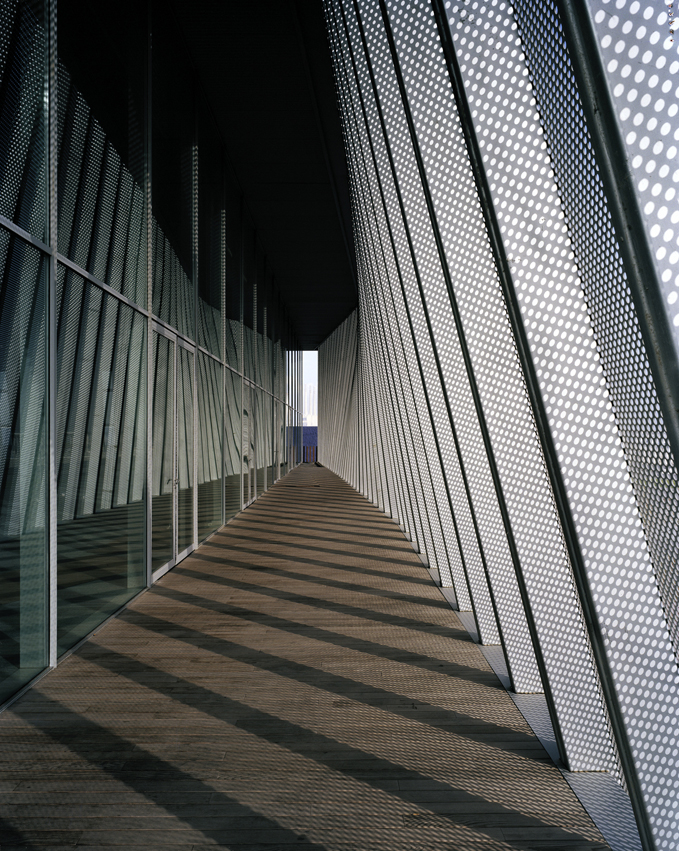 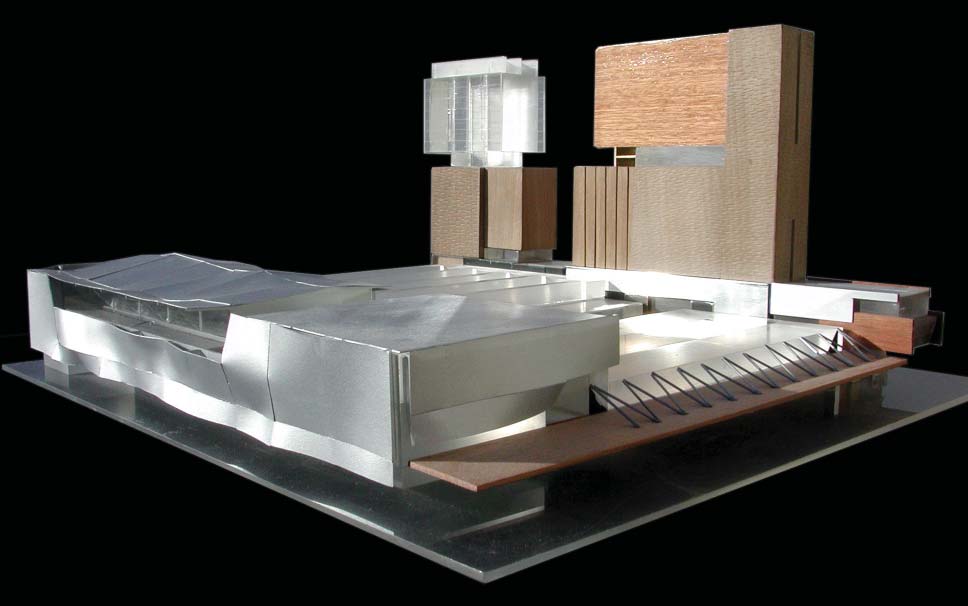