Institute of Cell and Molecular Science at Queen Mary University

In order to ” attract the greatest scientific minds in the world ,” the directors of the Queen Mary University commissioned the British architect Will Alsop the design of its new clinical research center, the largest of its kind in Britain.

The building opened in 2005 with study design firm AMEC Alsop and specializing in buildings for scientific research and development.

The directors of the Queen Mary University planned a new workspace open in promoting fertilization of ideas among the 400 scientists who occupy the building.

One of the issues to be resolved for the design team was security and development teams, two of the most valuable resources of the university, after the team.

Undoubtedly, the building breaks the mold of research laboratories, and it is a very interesting place to visit.

The work makes an immediate visual impact and are designed with the intention of starting a recovery process environment downtown Whitechapel.

Located on the campus of Queen Mary Uiversity of London, behind the Royal London Hospital in Whitechapel downtown.

Formally, the work is a collection of buildings as large glass pavilions, simple and austere. However, inside the main block, four objects seem to float like giant balloons : a striped mushroom, a black hedgehog, an orange cloud and a zeppelin. Each of these forms has a specific function that it houses.

Functionally raised a great innovation to traditional closed and isolated laboratories. A large space as a laboratory, open and continuous was created. This unusual configuration gives a high degree of adaptability to the reorganization of the laboratories.

The set is composed of several glazes prisms. The main body is a three-storey glazed pavilion, which houses laboratories, offices and meeting rooms. An elongated square separates the body from the rest. The amenities block is a tall, slim volume of 6 floors. The auditorium has 400 seats.

The entire assembly is connected by a glass bridge that, besides marking the entrance leads to the adjoining building, the existing Clinical Research Center at the site.

The elongated square prisms amid is crossed by the bridge. This serves as your gateway and garden inside the assembly. It is the main meeting place outside, in relation to the cafeteria downstairs.

In the main body, a great emptiness takes all levels, from the basement, a triple height space six feet deep linking higher levels. Occupying an area of ​​3000 square meters, open-plan laboratories, naturally lit by large glass surfaces are located. There scientists share a space created to encourage scientific collaboration. The facilities come to each workshop by higher green borders that also contain enlightenment. Individual laboratory spaces are separated by clear glass walls that give scientists a sense of relief space and visual contact with colleagues.

In that big empty three levels, four objects that star hanging inside the work. A great way to Objects or giant caricatures, each has a specific function.

The largest, is a kind of ” orange cloud” two levels where the Centre of the Cell, a department of scientific dissemination develop. From there you can see the underground laboratories.

The ” striped mushroom” room serves as informal meetings or expected. A spiral staircase connects from this volume, the ground floor with basement.

The third element is a ” pocket zeppelin ” a space for seminars isolated noises.

A ” black hedgehog ” is the fourth volume functioning as singular meeting space.

The building aims to draw attention and attract visitors. Here is a paradox, because the confidentiality of scientific research prevents close contact with lab tables. This conflict is fully resolved with the location of the main entrance on the narrow block, from where you enter the main pavilion and visitor center via a bridge on the first floor, so remaining segregated areas of research ground floor and basement.

Vivid colors permeate the building, not only in the four animated forms but throughout the work. Approaching the building, with abstract designs posters are observed. Friendly Drawings of lipids, proteins and genes are part of a communication strategy that seeks to encourage the entry of the public. The graphic designs were made by the artist Bruce McLean.

The glass bridge connecting the prisms, wears fuchsia pink crystals combined with red tomato. Meanwhile, inside the auditorium of 400 seats has different shades of green on walls, ceiling and seats also. The cafe area and the reception on the ground floor of the main hall are painted bright orange.

The structure is a reinforced concrete box with steel perimeter walls soldered directly to the foundation. The structure of the two wings is made of steel. In the largest pavilion, tubular steel columns braced by concrete cover to the staircase.

The objects hanging on the primary volume are constructed of fiberglass or membranes on skeletons tensioned steel pipe. The ” orange cloud ” and ” shredded mushroom” are fiberglass, while the zeppelin and the ” black hedgehog ” are covered with a plastic cloth taut.

Institute of Cell and Molecular Science at Queen Mary University 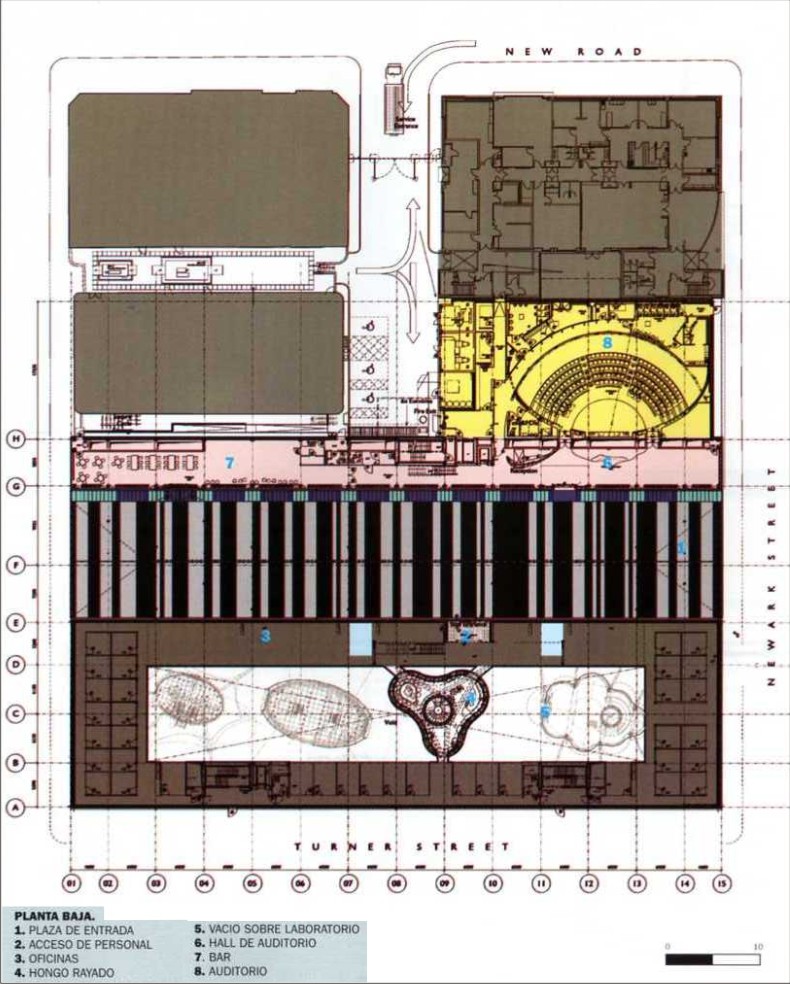 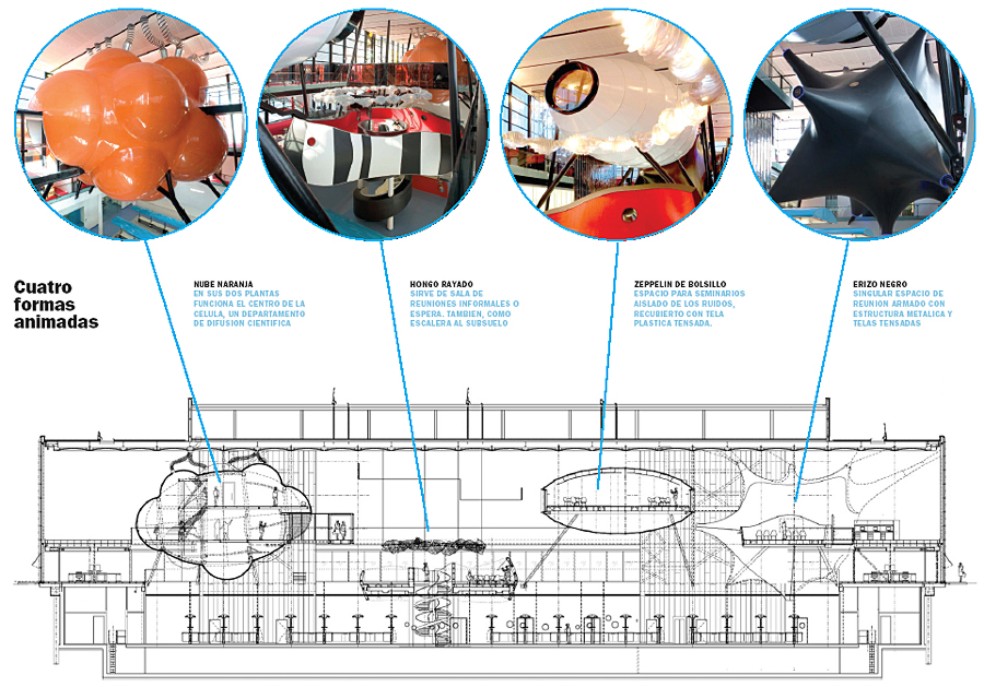 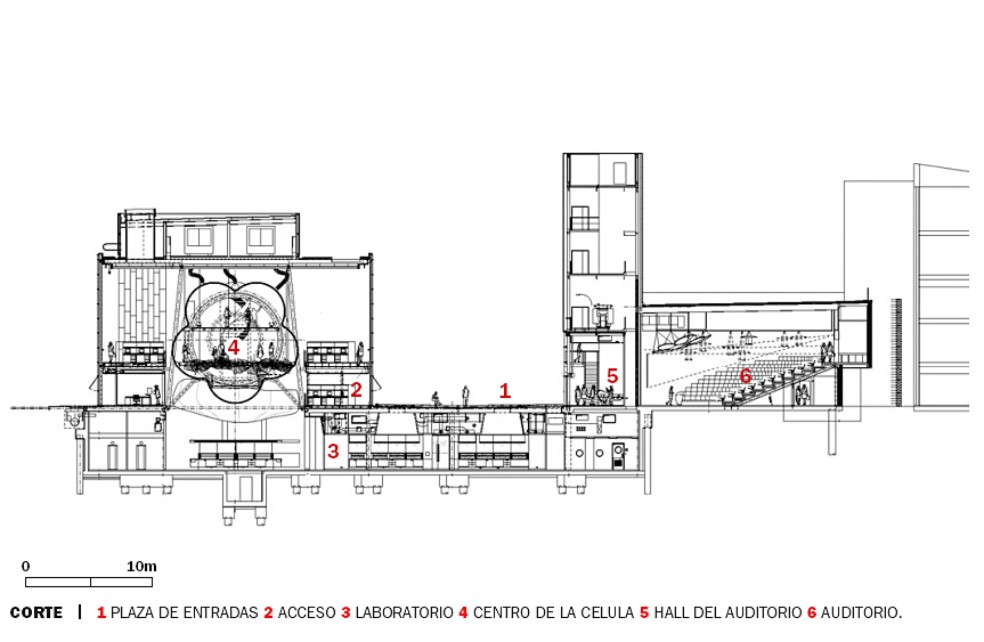 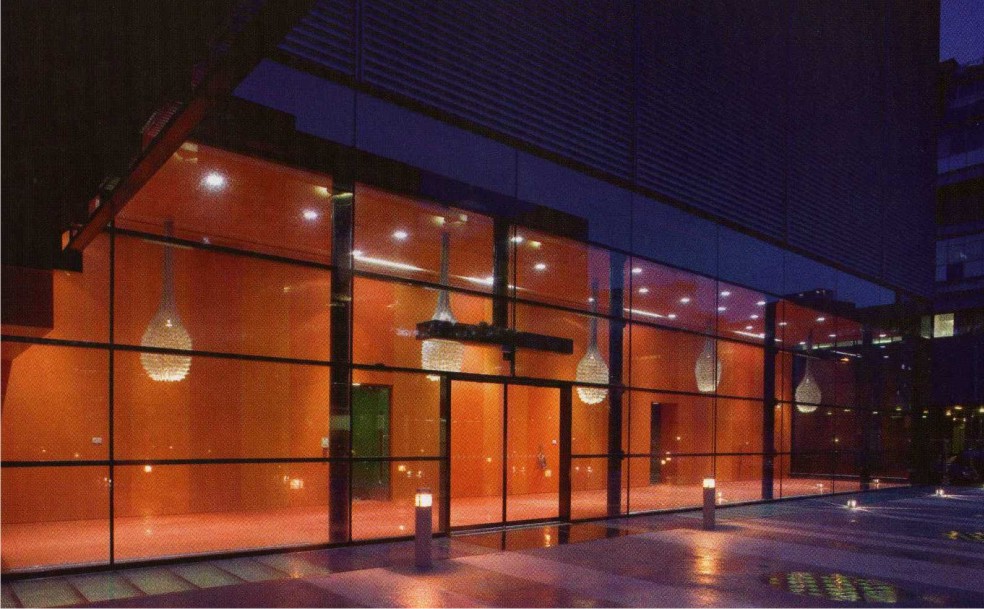 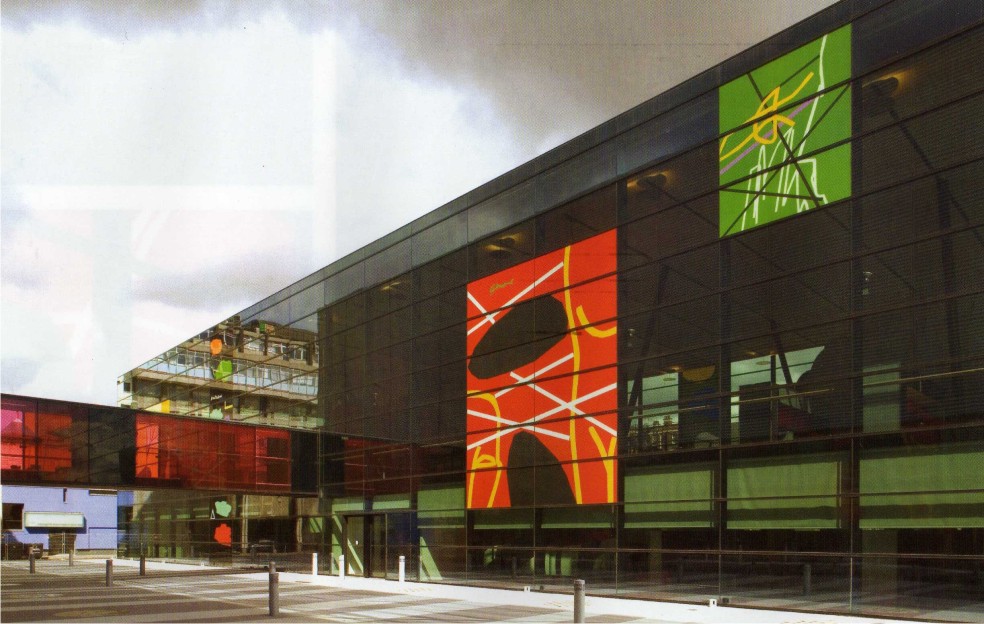 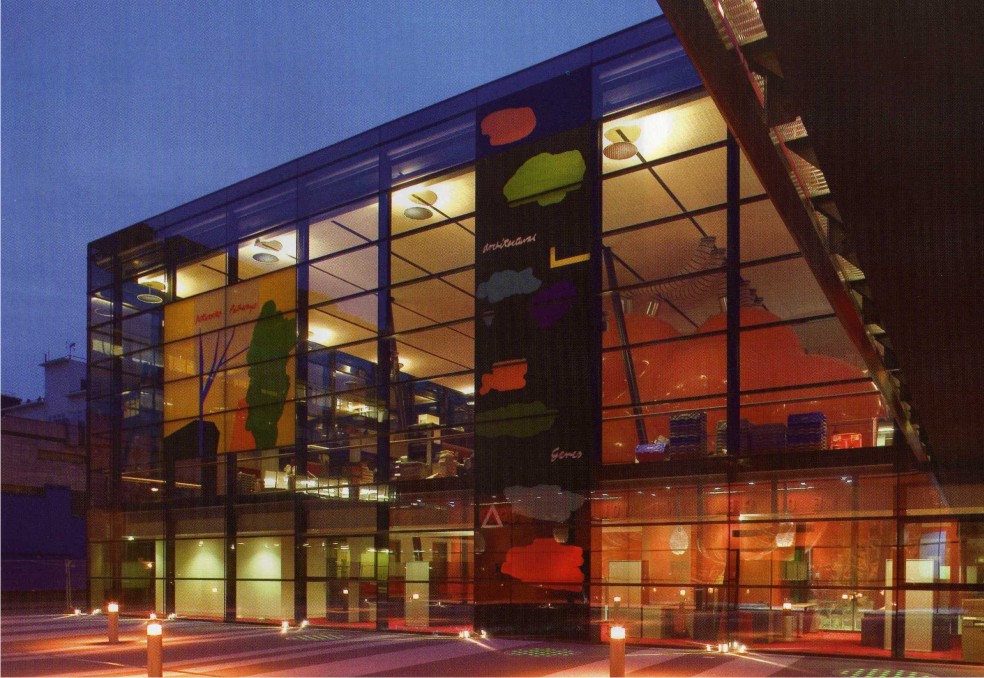 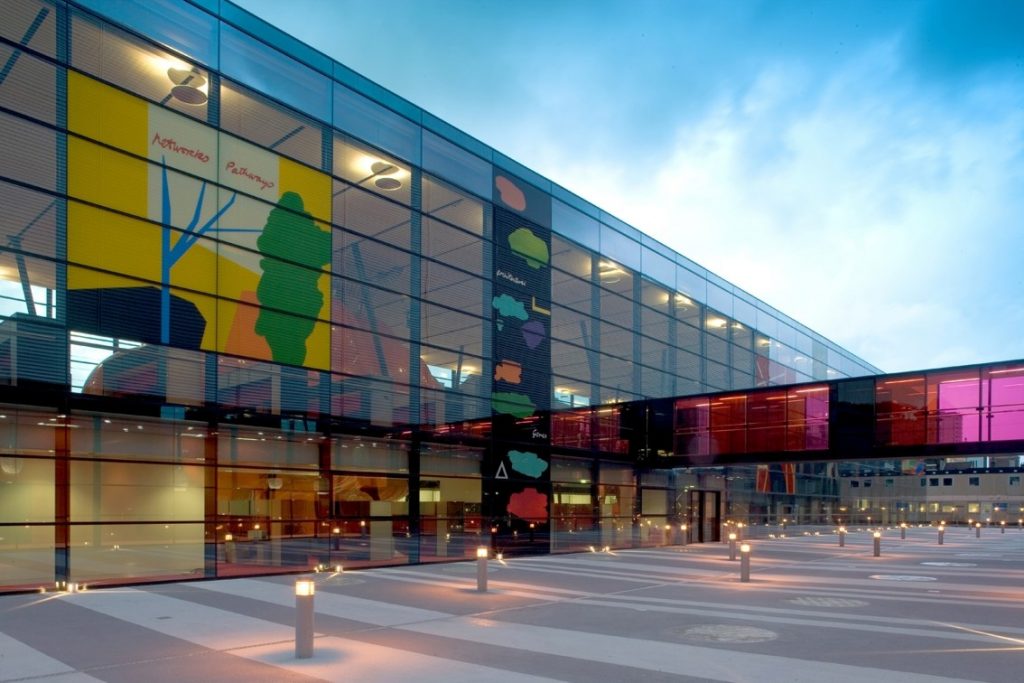 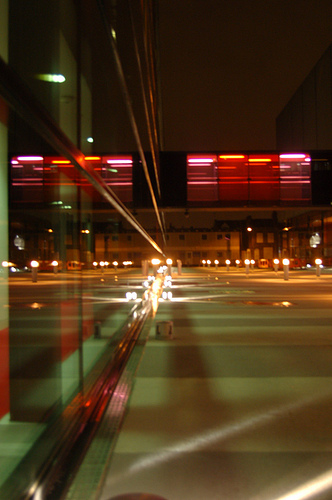 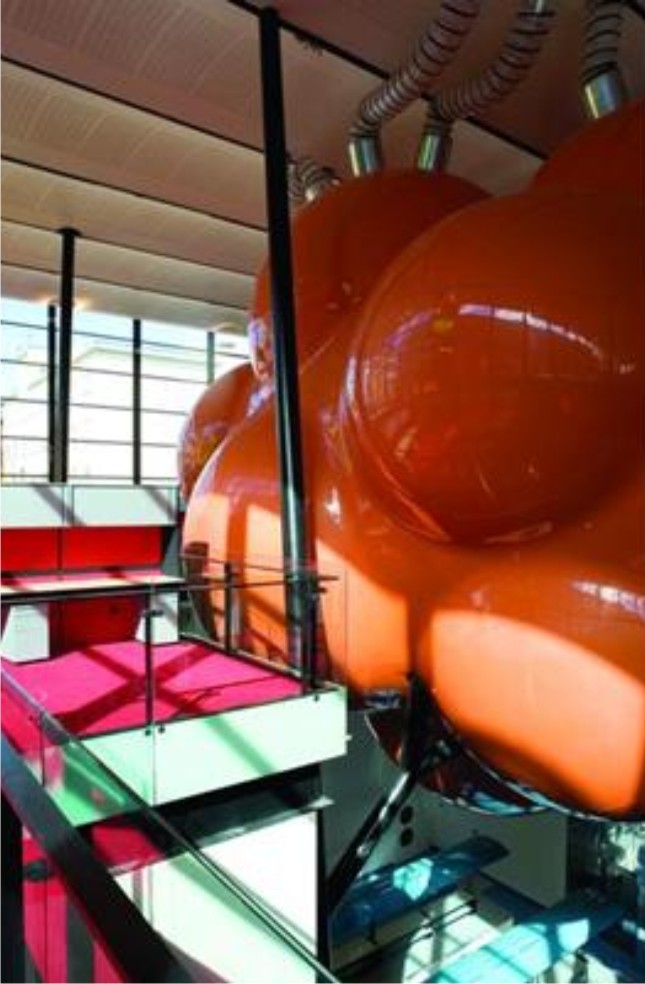 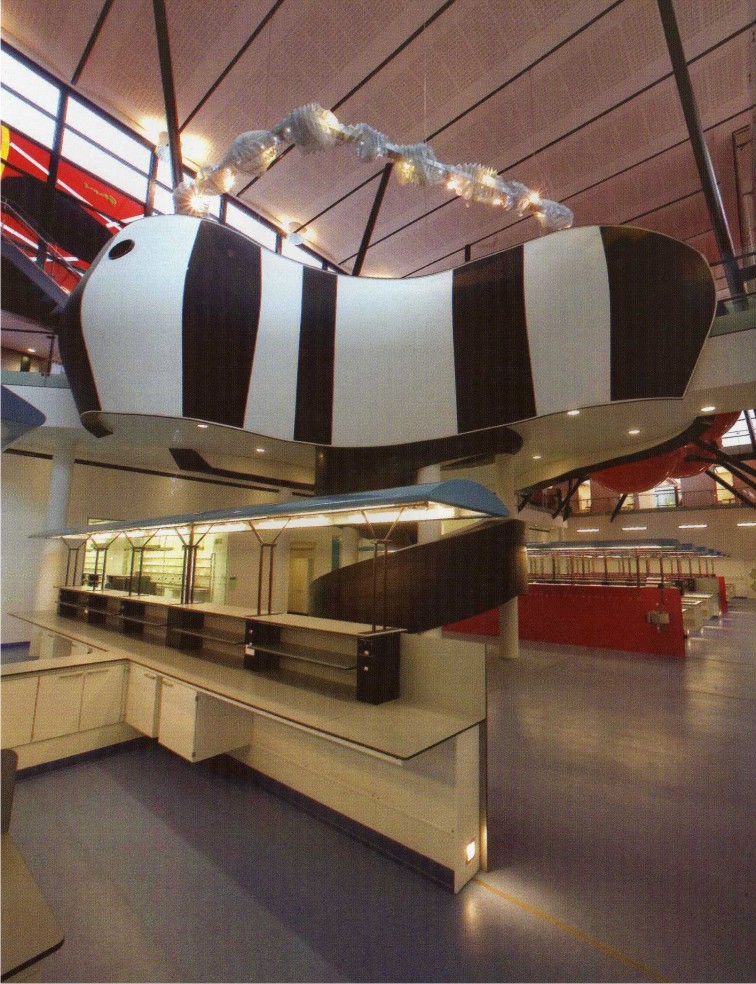 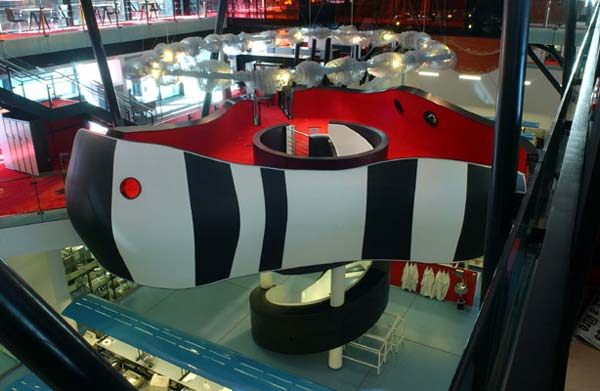 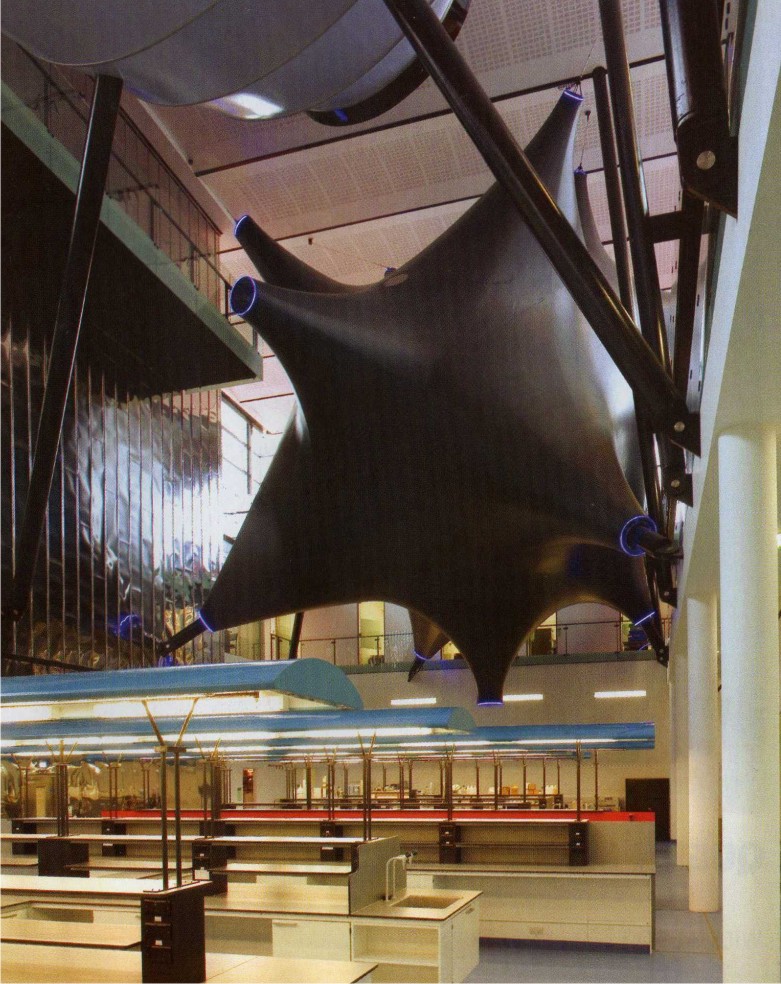 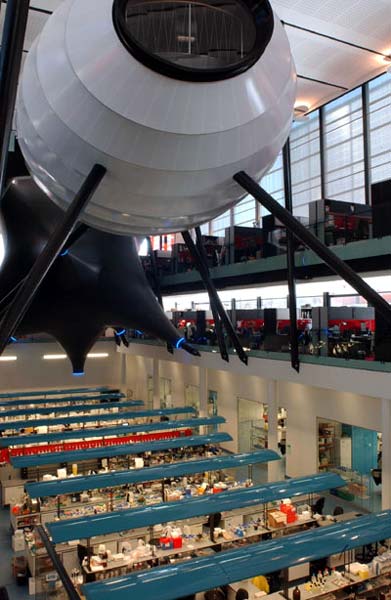 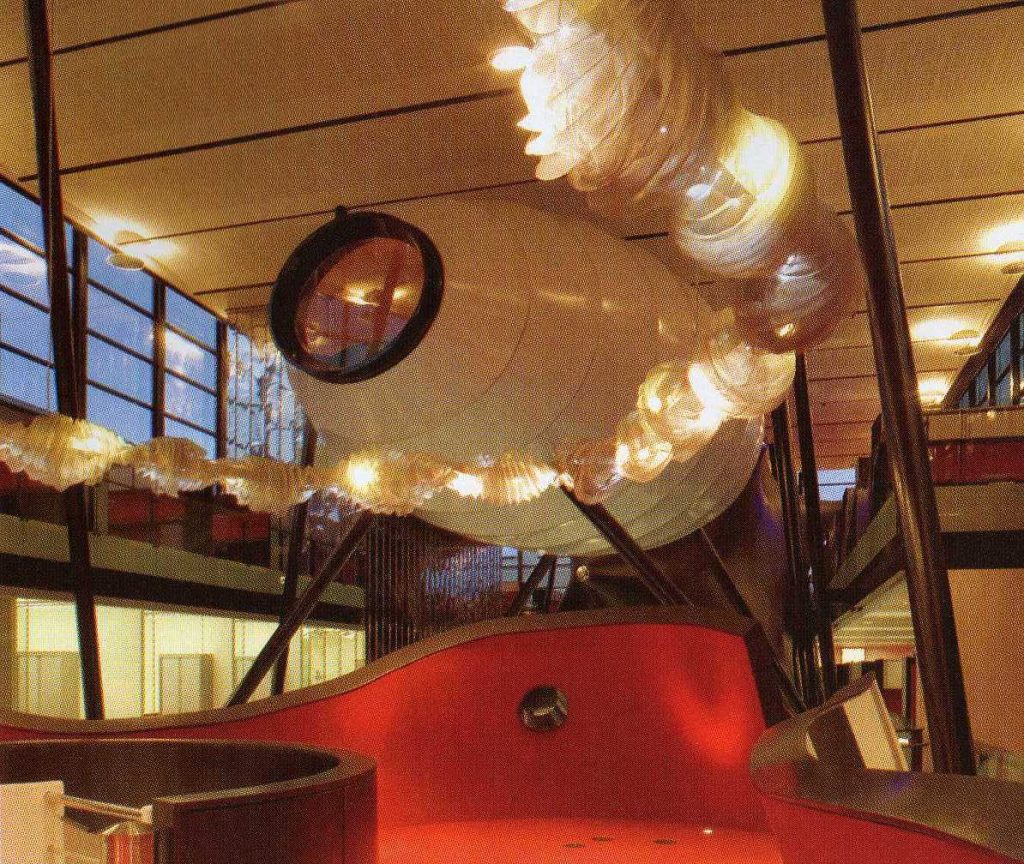 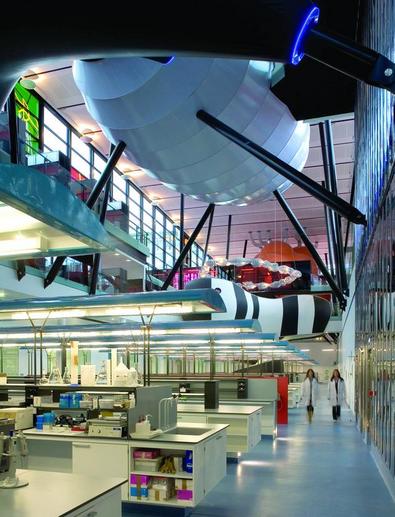 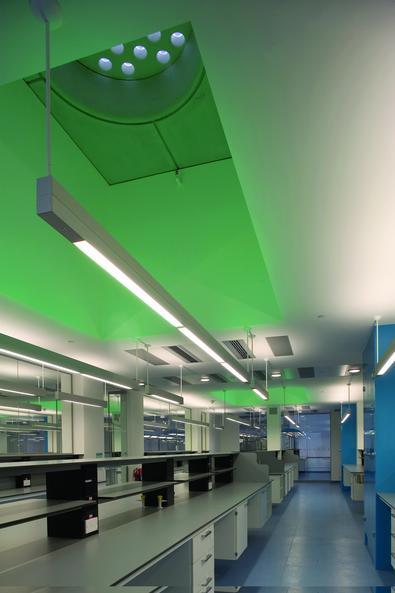 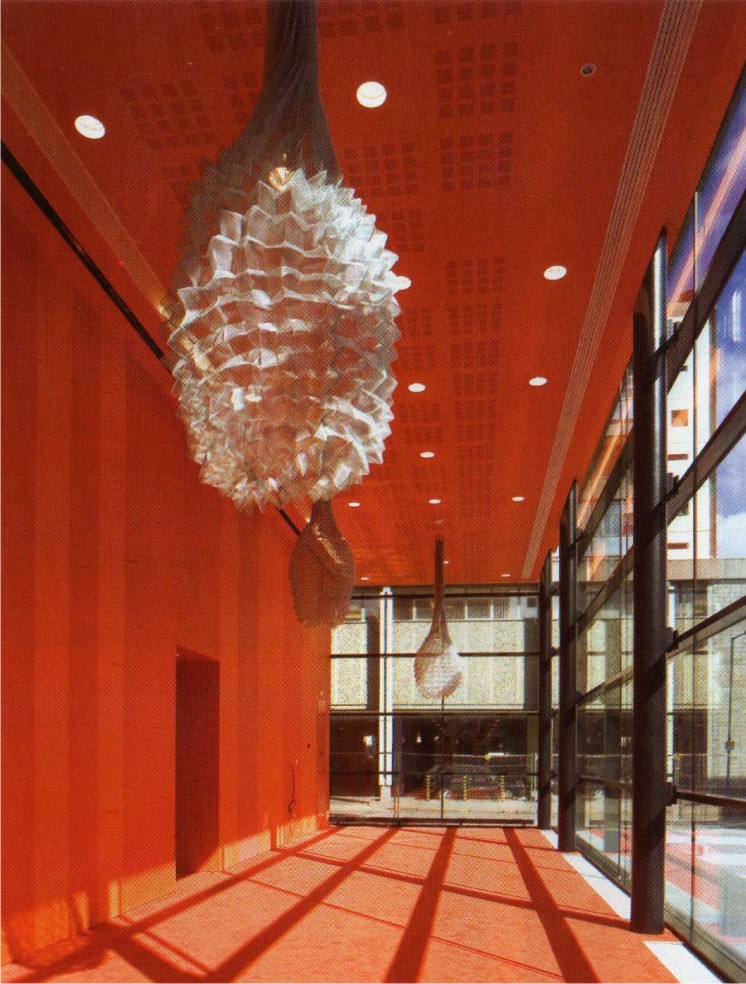 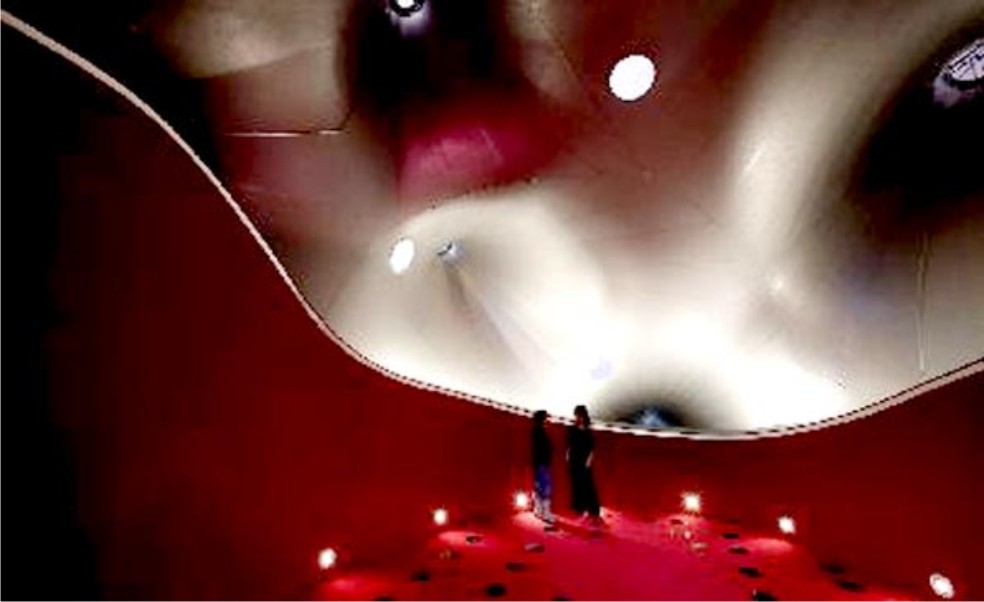 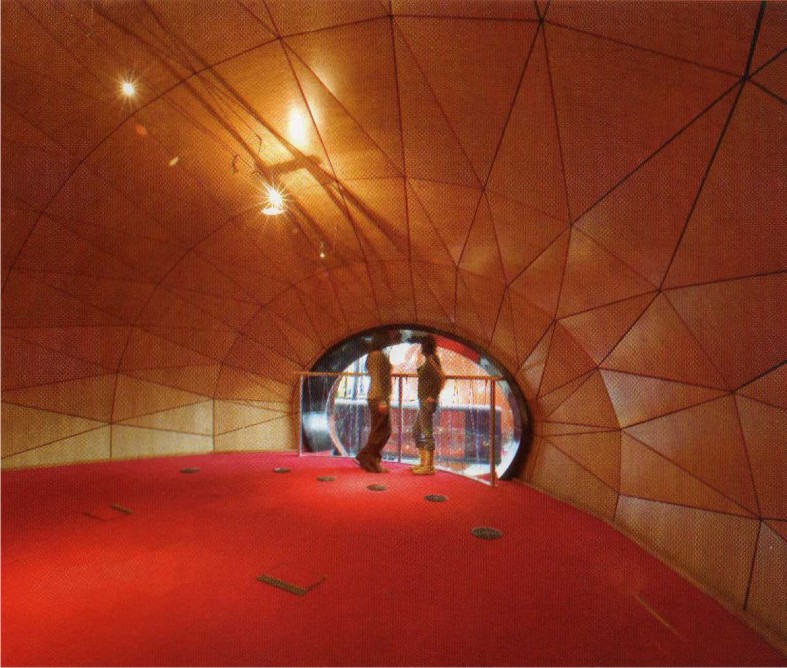 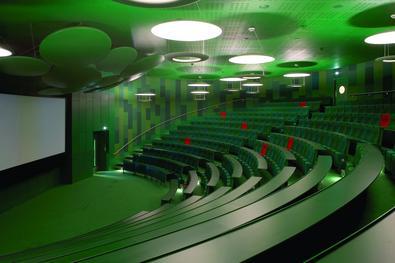 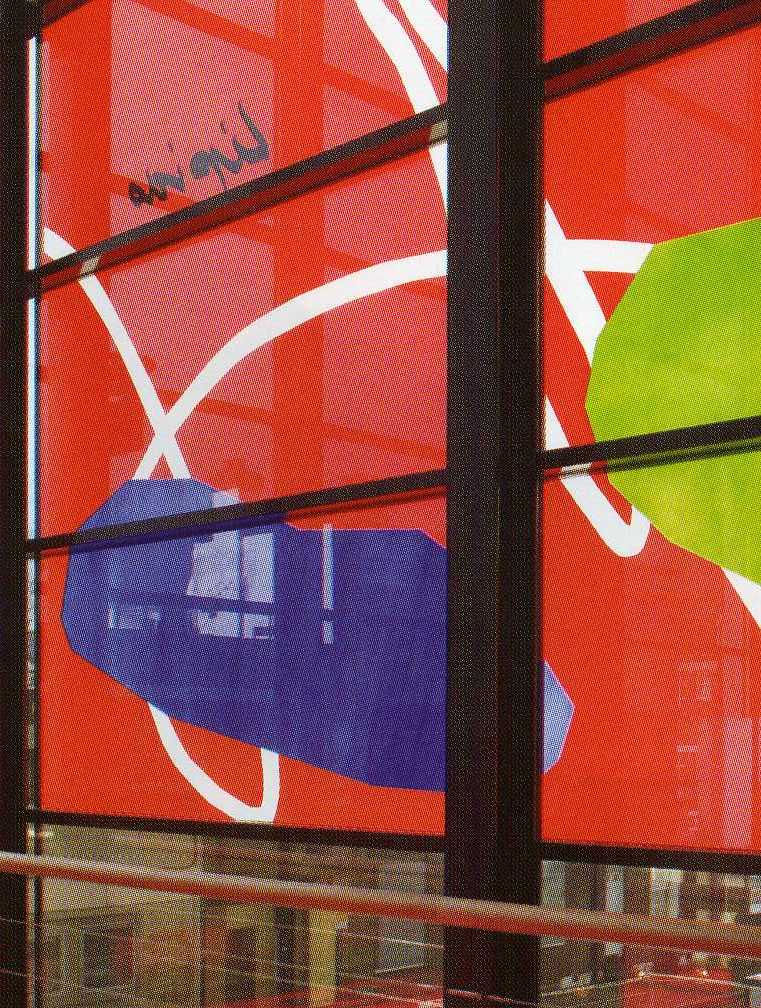