The Church of San Francisco of Asís was built in 1943, as part of the Pampulha Architectural Ensemble project, designed by Oscar Niemeyer and commissioned by the mayor of Belo Horizonte, Juscelino Kubitschek.

The Pamoulha Ensemble is a landmark of modern architecture in Brazil and worldwide. The architect also designed the casino, yacht club and a ballroom. A hotel was also added, not designed by Niemeyer. He also designed and built the mayor’s house.

The church is considered the masterpiece of the group. However, it received numerous criticisms from the more traditional cultural echelons of the city, above all from the ecclesiastical authorities, who for 14 years would not permit the consecration of the chapel, due among other reasons to its rather unorthodox form. One mayor even proposed the building be demolished and substituted for a copy of the church of San Francisco in Ouro Preto. In the end, the National Directorate of Artistic Historical Heritage intervened and decided to take the church under its jurisdiction.

Being the symbol of Belo Horizonte, the shape of the church is seen on the road signs which direct travellers on the road into the city.

In 2005, it was renovated with the support of a private initiative, due to its precarious state of conservation.

To carry out the works, Niemeyer relied on the collaboration of structural engineer (and poet), Joaquim Cardoso, the Brazilian artist, Cándido Portinari and the landscape architect, Burle Marx, who was entrusted with the design of the exterior gardens.

This was one of the first works of the architect, for which he received acknowledgement throughout the country. Niemeyer found here the opportunity to challenge the monotony which surrounded contemporary architecture, in contrast to the sculptural freedom which cement allowed, he began to design the curved architecture for which he is famed.

The church also represented a totally groundbreaking use of cement for ecclesiastical buildings.

It is located in Belo Horizonte, Brazil, on the banks of the artificial lake of Pampulha, whose perimeter is 18km. The Federal University of Minas Gerais is nearby, as is the Mineirão football stadium.

The work is characterised by its marked sculptural character, which is manifest in the use of concrete, achieving volumes of great formal value while incorporating the poetic values of the country’s culture.

The use of curves and oblique lines throughout the church, intentionally discarding the right angle, confers an asymmetric and flexible character which testifies to the creative freedom of the architect and forces maximum exploration of the sculptural potential of reinforced concrete.

The curves of the church maintain a harmonious visual continuity between the habitable spaces, reacting to one another to generate a single communal space with various ways of traversing it.

The church is comprised of a series of arches which form numerous vaults. The two largest support the roof of the nave and altar, while the other smaller ones support the rear of the church. The bell-tower and the awning of the entrance are independent elements which contrast and complete the ensemble.

The use of the parabolic vault allows for one unique element to form the roof and walls.

The entire back wall is occupied by a mural of San Francisco, painted by Candido Portinari.

To draw attention to the mural, the architect shortened the vault, narrowing it toward the altar. A play of light between the illuminated choir and the dark wood of the nave further highlights the mural.

The rear façade is covered by a blue and white composition of tiles, also designed by Portinari.

The entire structure is made of reinforced concrete.

The exterior panels are comprised of tiles.

In this work, the architect did not used structure independently, with blocks of concrete supported by pillars as in the rationalist language of architecture, but implemented as a new constructive solution. Reinforced concrete vaults: structures previously used in engineering works such as the construction of aeroplane hangars. Niemeyer appropriates these utilitarian constructions, exploring their sculptural and aesthetic capabilities. 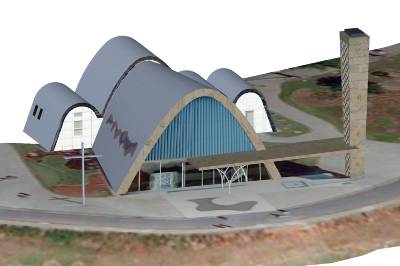 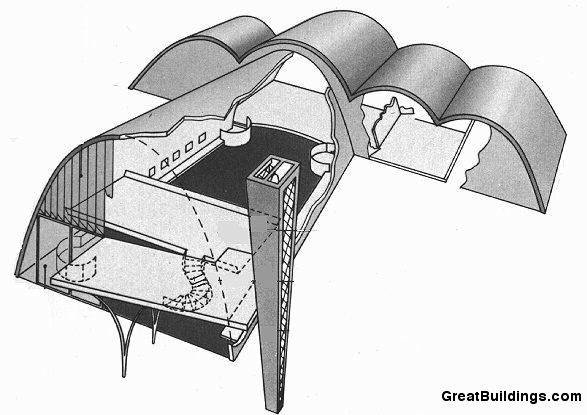 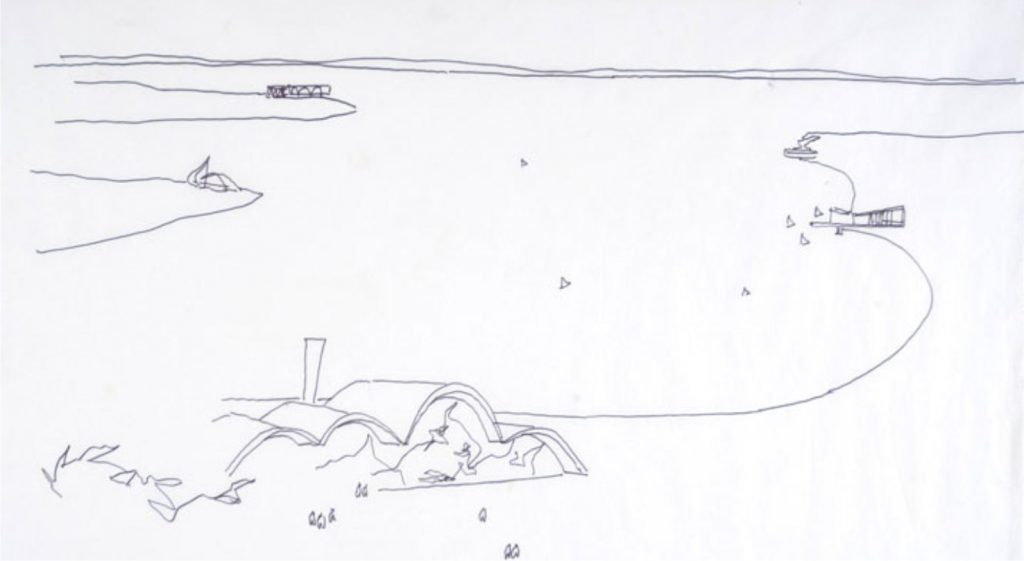 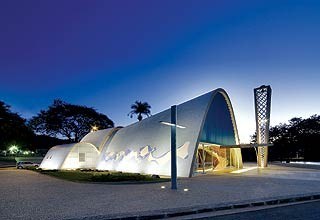 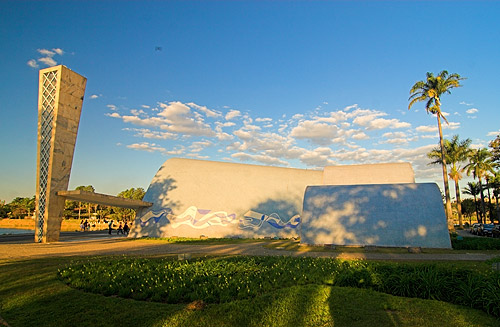 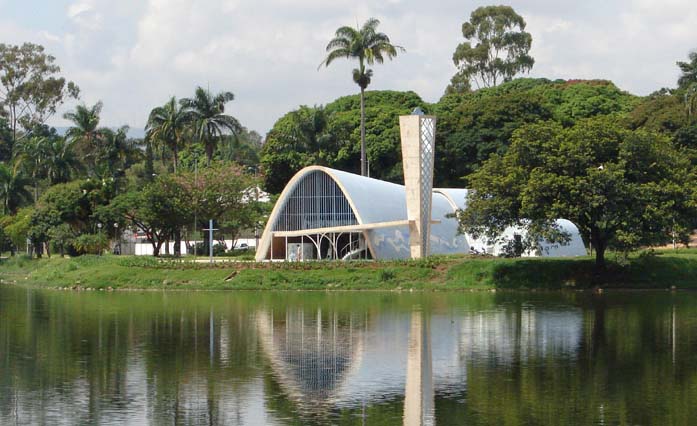 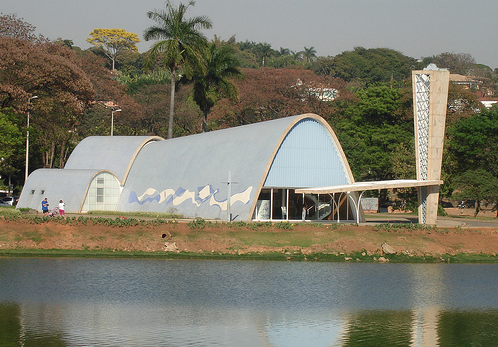 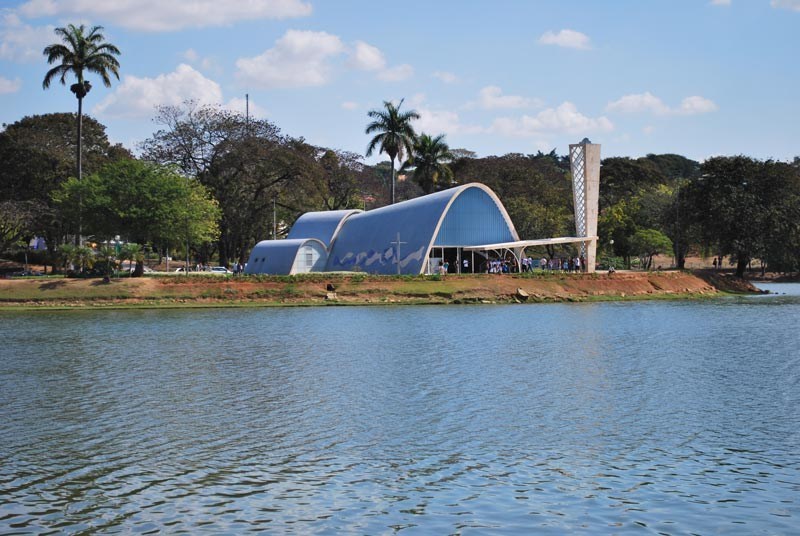 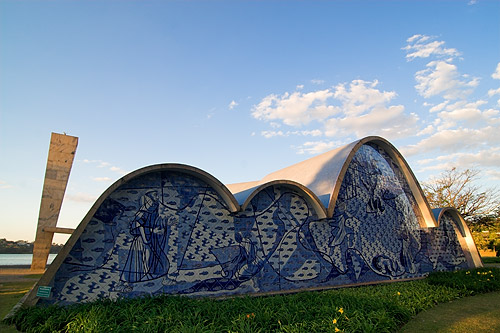 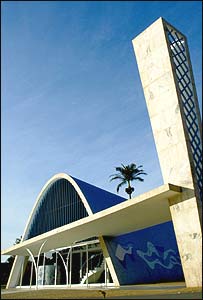 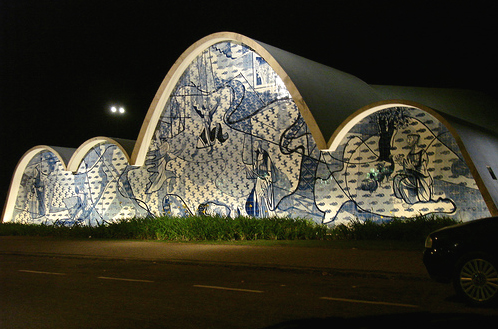 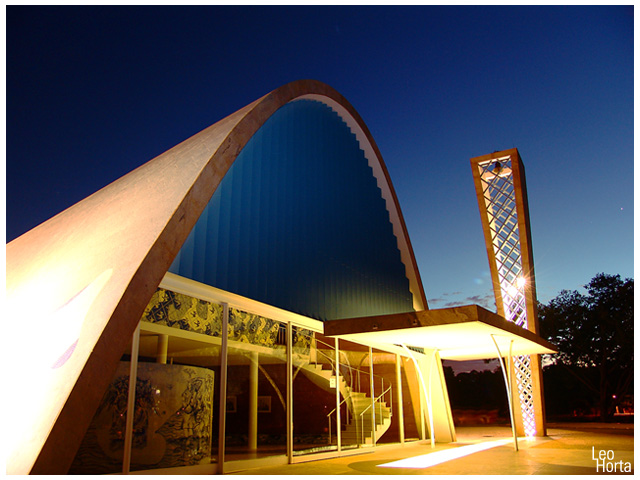 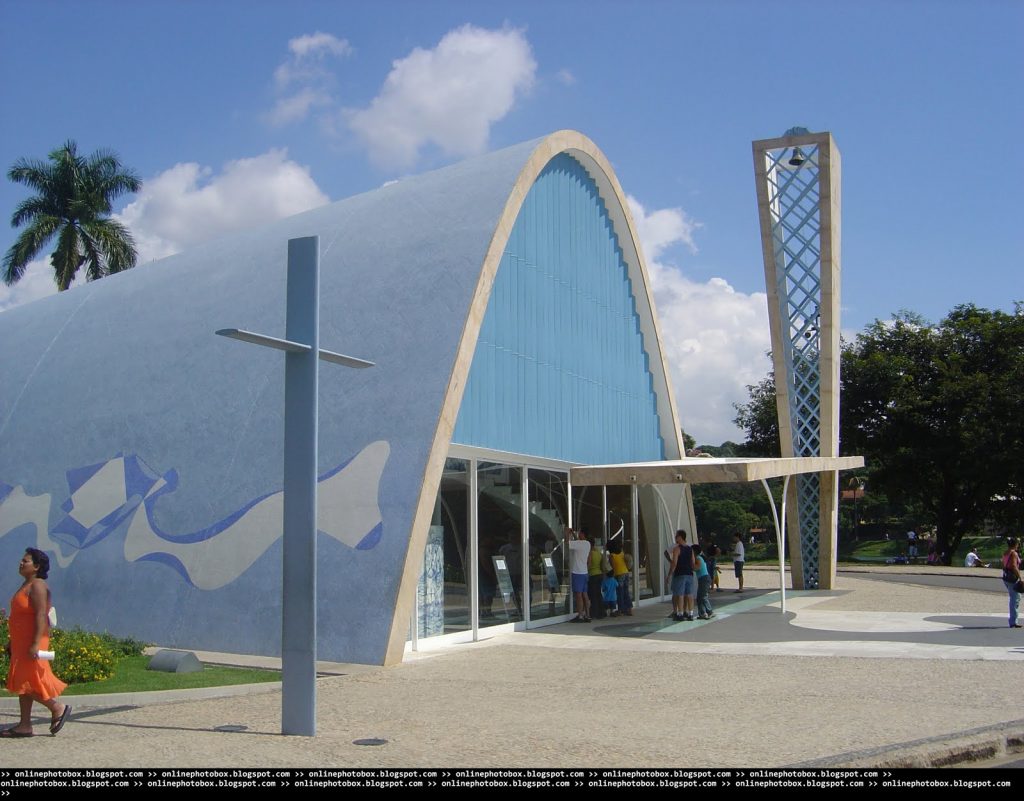 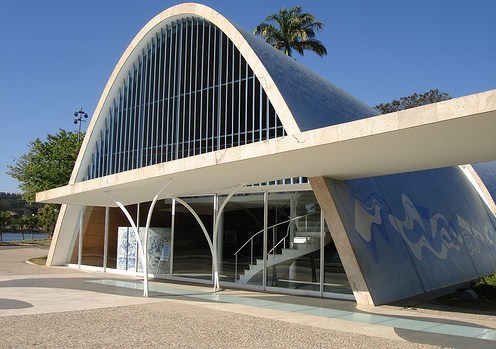 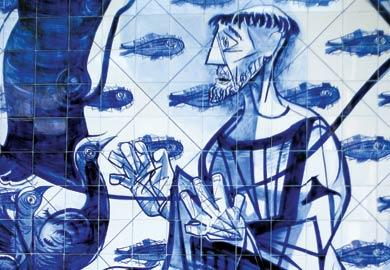 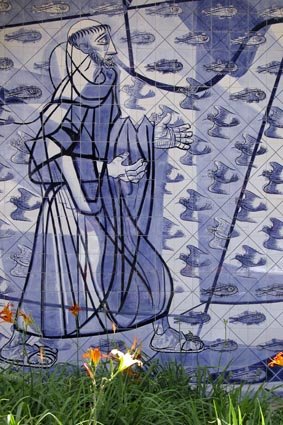 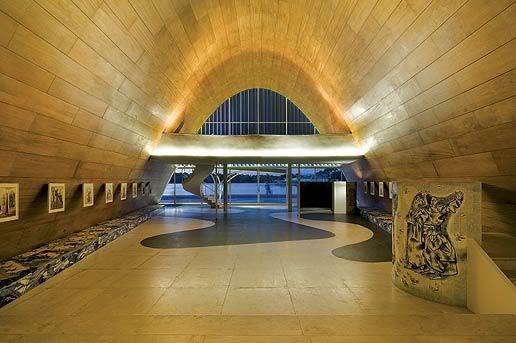 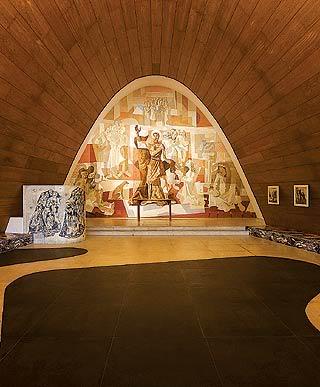 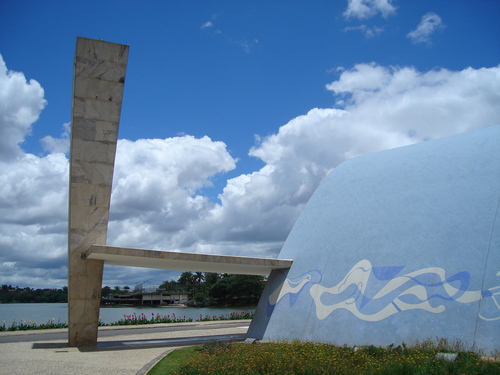 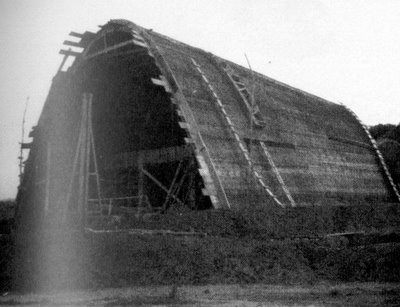