This weekend house, with its distinctive front with two driveways on either side of the entrance to the house, was designed by Craig Ellwood, in association with Jerrold E. Lomax, for Dr. Hunt and his wife Elizabeth and published in the December 1958 edition of the magazine Art & Architecture, although not part of selecting the Case Study Houses, although its style is closely linked to the project promoted by the magazine.

Though it was restored, the house always maintained its original appearance. One of its last owners, Gyula Molnar, he has never changed color or shape, despite being built in 1957, is preserved even furniture designed by the architect.

The House Hunt won the Golden Award of Architecture Gold Award Arquitecture in 1960.

The Hunt House was built in the 24514, Malibu Road, Los Angeles, California, USA on the promenade from the beach in Malibu,

In Malibu beach is private and not available to the upper class because of restrictive legislation, but because the development model makes it physically inaccessible. From the dock east of Malibu, to the Santa Monica Pier, the main road linking the coastal cities, the Pacific Coast Highway, is sandwiched between sand cliffs and dunes land side and the beach itself on the other side.

Between the road and the beach, which were once sold as small plots of land to beach huts, are now completely covered by houses of the middle class.

Ellwood believed that the aim of architecture was to enrich the joy and drama of life, which embodies the beach house in its entirety.

A translucent glass panel with aluminum frame, in the same plane as the facades of garages, gives privacy to the entrance and complete architectural form in the street facade.

The floor of the house has a “H”, with seating areas, dining room and kitchen on the leg that faces the sea and the other two bedrooms and entrance platform. Both legs are joined at the entrance and two bathrooms. The kitchen and living room are open, the latter a double fireplace surrounds

Because from the ocean winds sometimes make it impractical platform facing the sea, is located inside the other. This private and secure space located between the master bedroom and the living room, allowing you to see from the bedroom, through a large window, the ocean.

Another smaller platform was among the smallest bedroom and kitchen. Since this space has easy access to the beach and one of the bathrooms, which is used for showering and dressing after taking the sun or swimming.

Wishing to express a form than the typical solution for the street facade of the garage, space for cars is divided into two units with the entrance ramp to the house located in the middle. These two garages are oversized to also provide additional storage space.

A small room located below the main structure at beach level, saves water heaters and air machines forced ventilation. It also serves as a warehouse.

The solution used for this type of land on the beach is building a separate pile structure with a beam accumulation up to the house and the garage and then follow the conventional steps of construction covers the wooden beams for the floor between the head beams loaded one by one.

In the design of this house Ellwood made an attempt to alleviate the substructure, thereby improving the overall design. The main beams on the piles must be positioned slightly above ground level and sandy light wooden beams should cover the main beams of the floor levels. This procedure would lower the structure, but the building department officials did not approve any solution that did not conform to conventional methods.

As a result, the substructure of the house is typical Hunt, perimeter columns accumulation of 30 cm in diameter, 4.50 meters deep, with an accumulation of beams every 5 meters 5.18 meters. Lateral reinforcing elements in the form of “V” are of 10x15cm.

The work builds on a rough wooden uprights which support horizontal platforms arranged directly above the beach sand. Establishing thereon lightweight structural framework for the boxes formed by a square section metallic pillars on which connectors are crimped transverse beams and wood. The architect designs and support scheme generating a highly ordered lattice framework that are stuck enclosure parts opaque and glazed panels that open the interior spaces of the house towards the patio and beach landscape in which it is situated.

The use of steel for construction of the chimney allowed the removal of a foundation pile. This fireplace is supported by a reinforced concrete pad that rests on a beam. Three of the walls of the combustion chamber are made of Pyrex glass, transparent, the soil was covered with bricks high refractarios.La steel plate is surrounded by a skylight on top of which were placed lights thus the night the fireplace becomes the main source of general lighting in this area. The fireplace is covered with a rotating unit, Ellwood patented, which prevents downdrafts, a fairly common problem in the beach locations.

On the wall opposite the fireplace were located high fidelity stereo components. The stereo speakers are located behind the panels of black cloth at the two ends of this wall.

This property located at beach level is built with beams 8x30cm and 8x16cm poles and covered with Douglas fir.

The main materials used in construction were wood, exposed concrete and glass with aluminum frames.
The interior furnishings were made by Craig Ellwood Associates.

The platforms of the house are wood deck. In the smaller platform, a wooden door painted in red gives access to the stairs that go down to the sand, while another painted in orange with a glass on the side closes the kitchen.

All panels and woodwork are Philippine mahogany. This wood was finished in a natural golden tone. The beams and posts with flat surfaces are black. The wood is gray headliner warm.

The interior walls are covered with plaster painted white, the gray concrete exterior.
The carpet is light beige and tapestries are neutral or black, with touches of bold and bright colors. 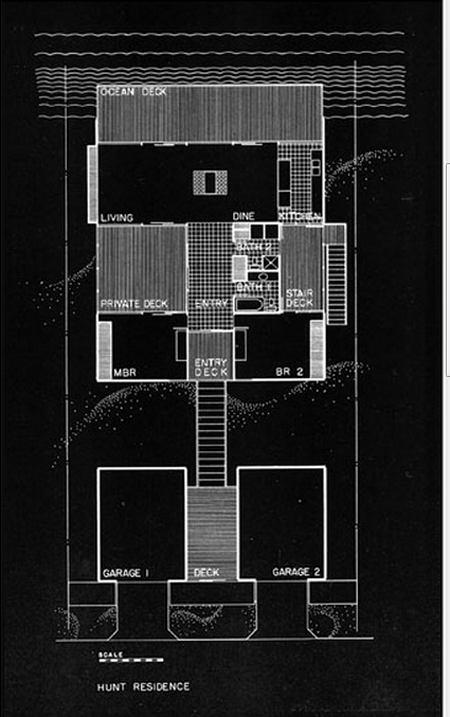 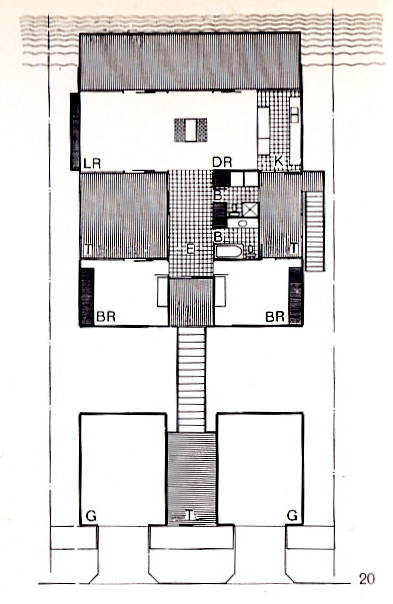 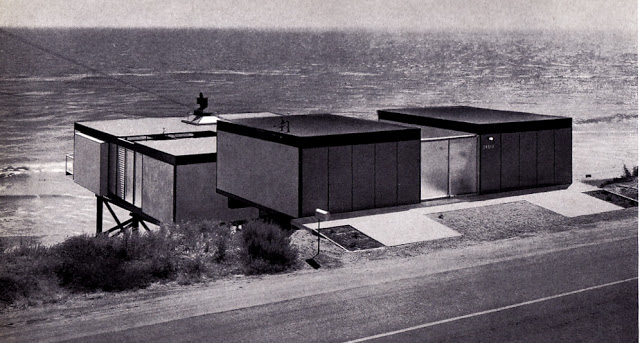 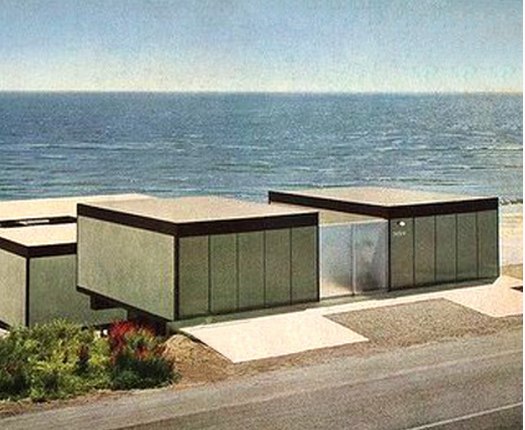 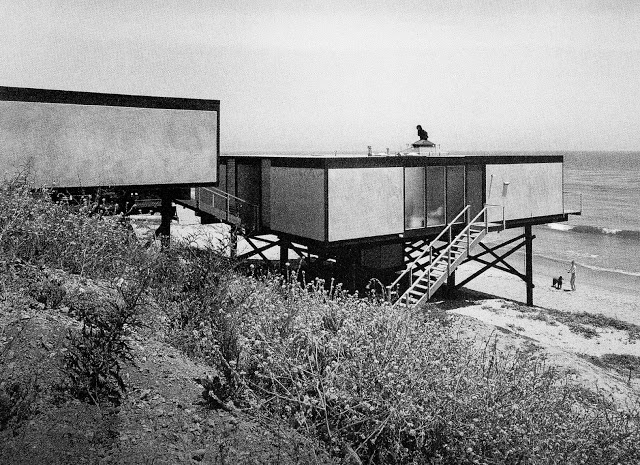 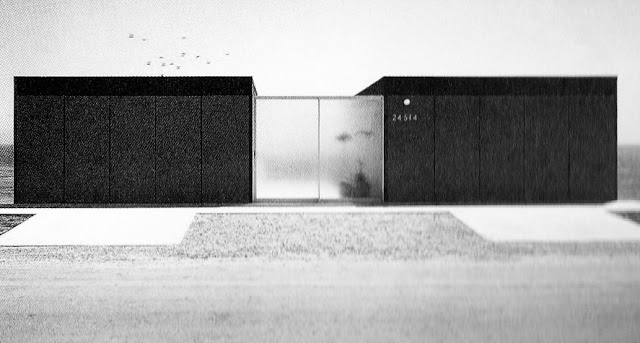 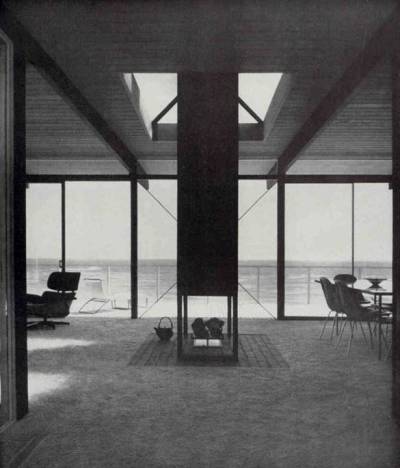 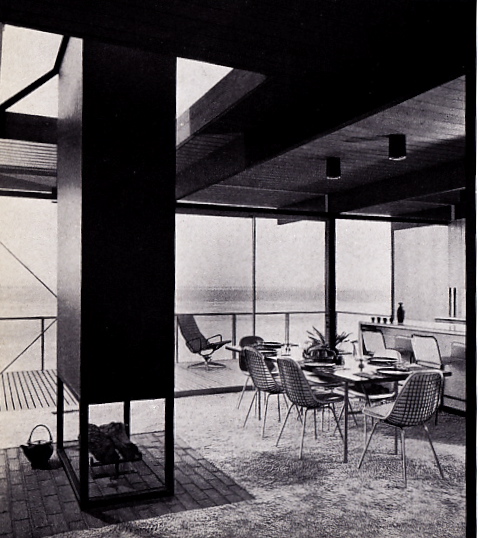 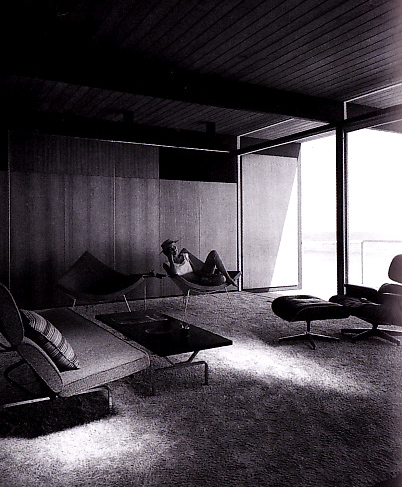 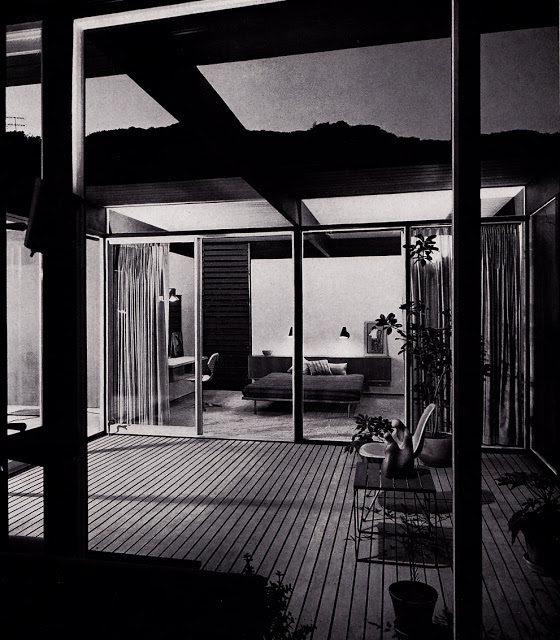 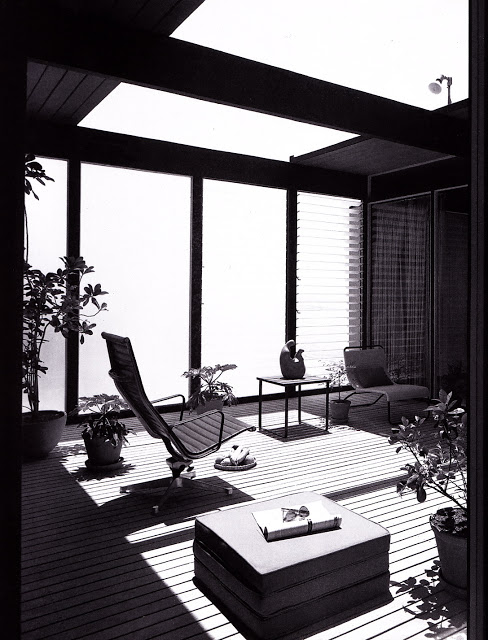 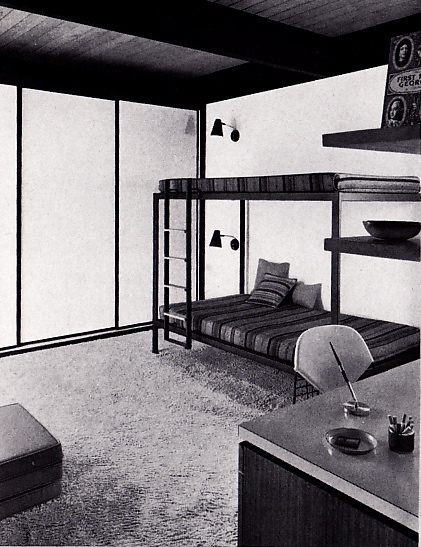 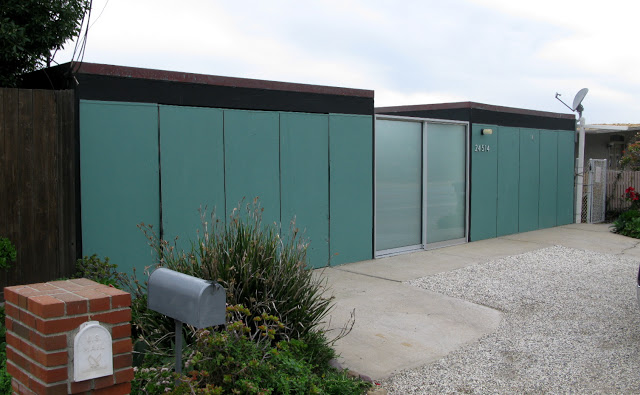 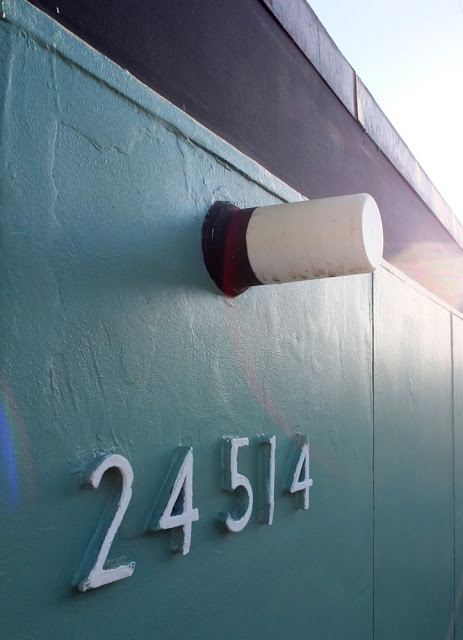 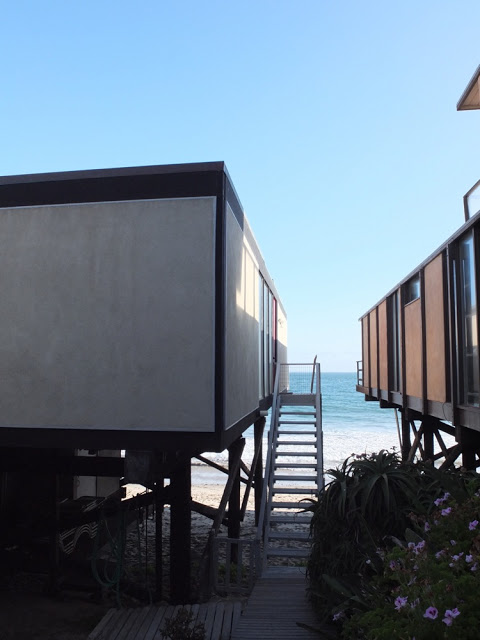 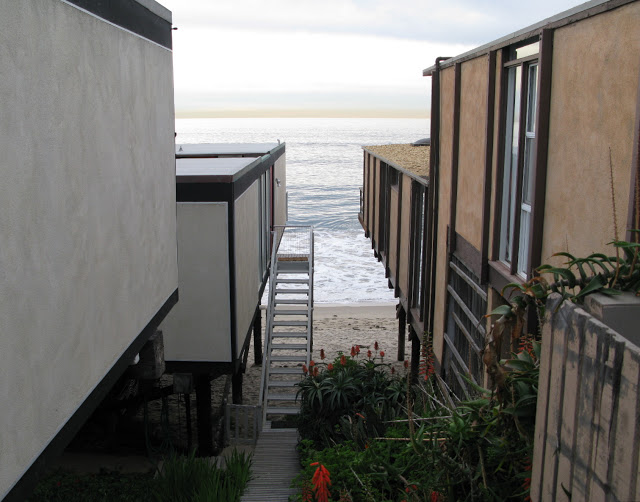 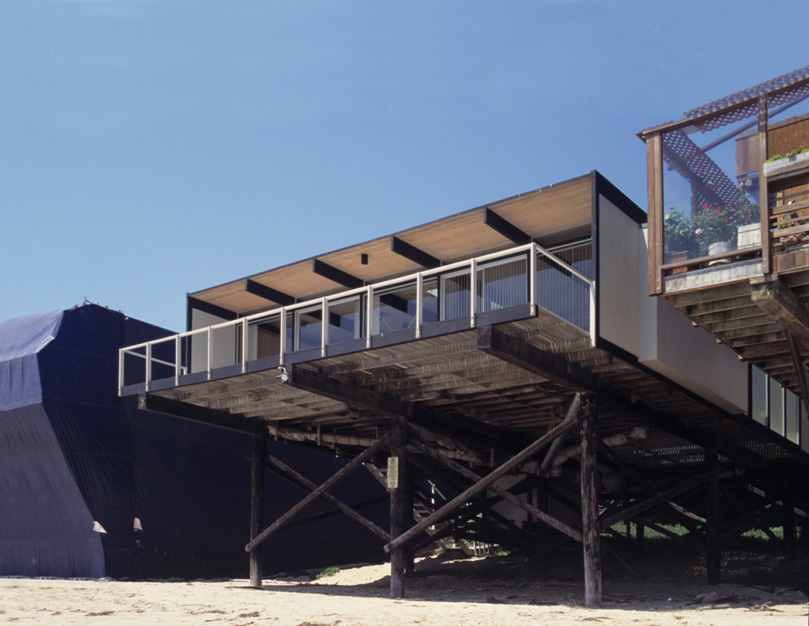 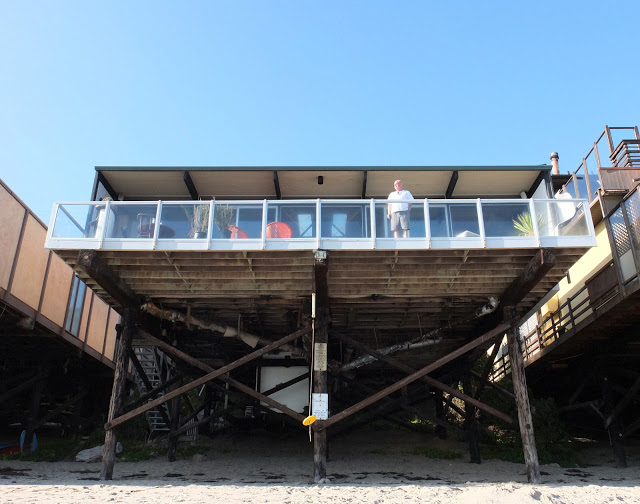 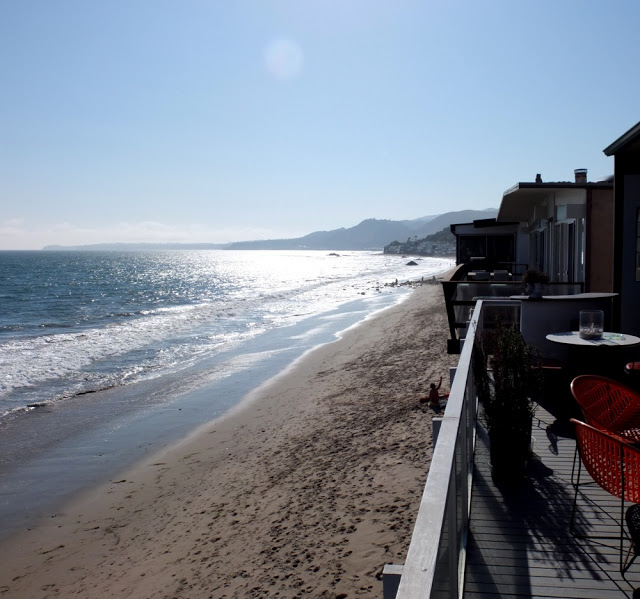 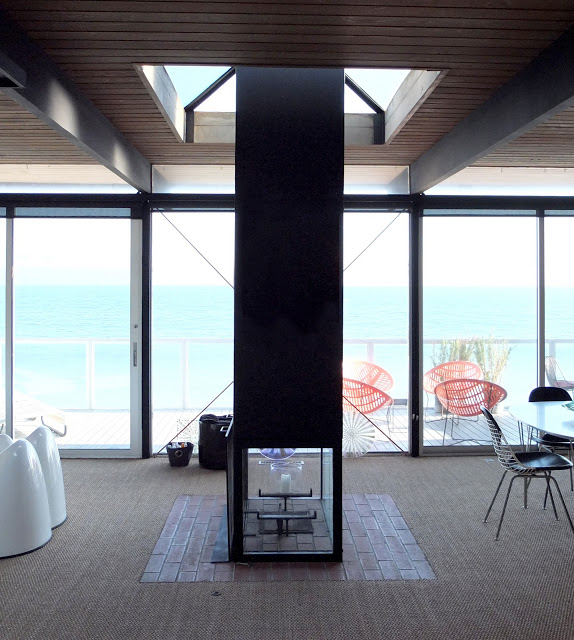 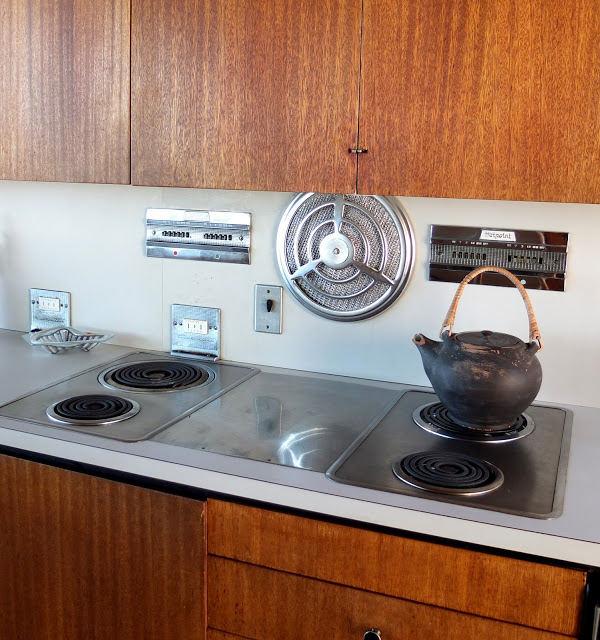 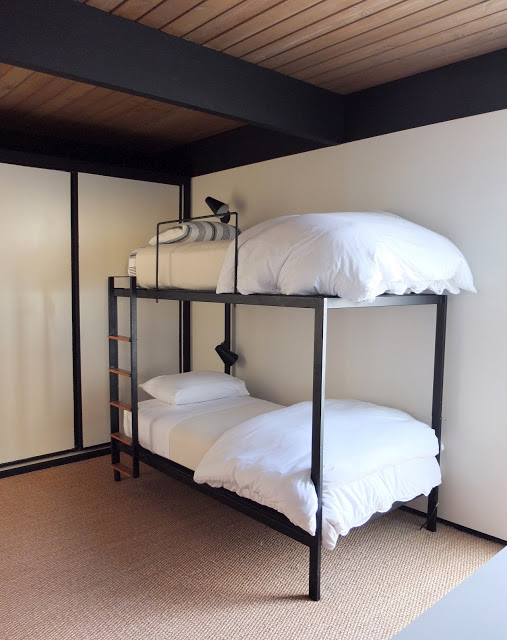 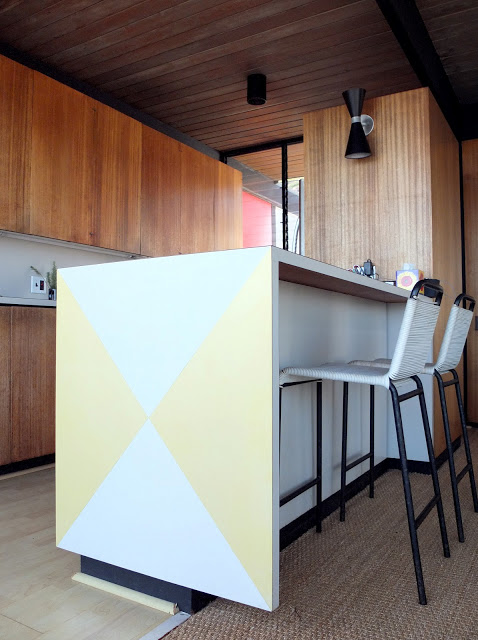 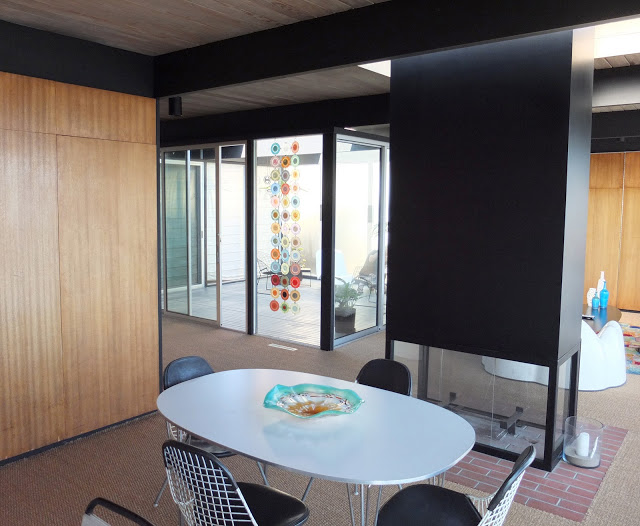 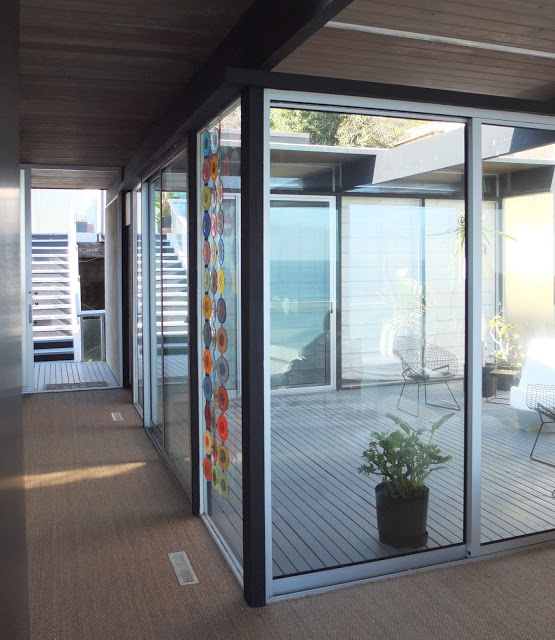 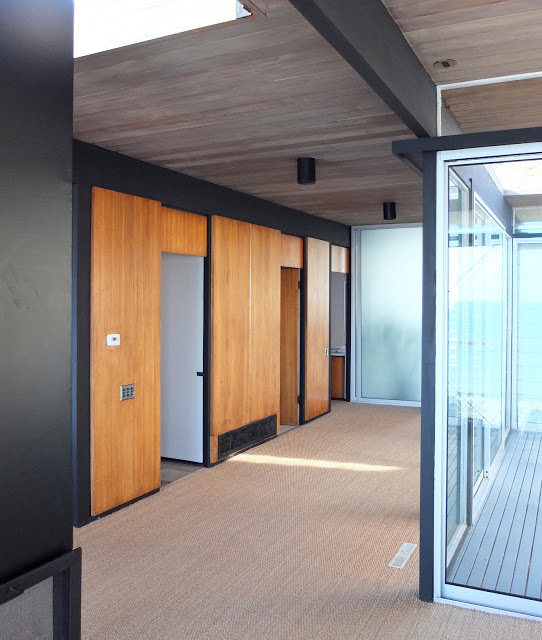 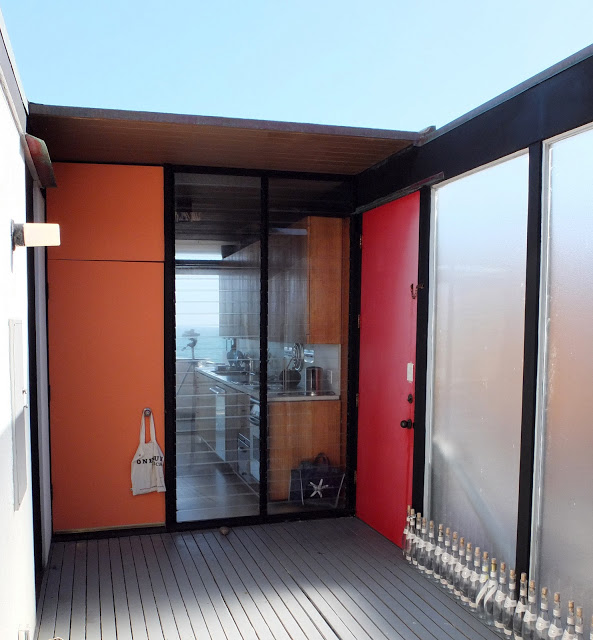