The Hunstanton School building, considered a manifestation of the new Brutalist movement, is remembered as the project in which this term was used for the first time and as the only escape route available from the Modernism movement, according to the manifesto of Alison and Peter Smithson. In this manifesto, they expressed that “it is out of respect for the materials that we find the root of the New Brutalism… an understanding of the affinity which can be established between the construction and man…”.

The building stood out for its extraordinary austerity, strict budget and formal clarity. It expressed the desire of the architects to reveal the essentials of the structure and the materials used.

Completed in 1954, the Hunstanton School provides an overview of the architectural experimentation of post-war Great Britain, as well as the growing acceptance of modernity by the country’s public authorities.

The Hunstanton School was built in the town of the same name, in the county of Norfolk, in the east of England.

From the beginning, the architects stated their intent to find a relationship between culture, industry and society. Peter Smithson remarked that the form of the school “is dictated by a careful study of educational needs and pure, formal requirements…”.

The qualities of the building can by synthesized as: formal legibility of the floors, a clear display of the structure and a valuation of the inherent qualities of the materials as “they are found”.

On a flat parcel of land, the building was constructed as a parallelepiped form of 89 by 32 metres, with a large, double-height entrance hall whose main axis lies East to West, towards Downs Road. The double-height hall is topped by large skylights which, according to Peter Smithson, act as the “heart and expression of the scholastic community and its relationship with the city”.

The building boasts clear and defined edges and a closed symmetry in the composition of its main façades. It shows a formalist planimetry ordered by axes of symmetry. Notably, the Hunstanton school has a biaxial symmetry that is easily perceived from the outside.

It is a building constructed in the same way as it appears. Regardless of what has been said about structural or constructive sincerity, the majority of the buildings of the Modernist movement appear to be made from a glass-like substance but, in reality, are more often brick or concrete. Hunstanton seems to be made of glass, brick and concrete and is, in fact, made of those materials.

The water and electricity do not appear inexplicably from holes in the walls, but are carried through visible pipes. One can see how they are made and how they work, and there is no other thing to see, except the set of spaces.

This space is the heart of the school, taking into the interior the continuity of the exterior space, with the green of the courtyards and play areas which surround it.

Classrooms are located on the first floor and can only be accessed by individual staircases, circumventing the classic corridor layout.

The gym is found to the side of the school, on the second formal axis of the building.

Among the defining characteristics, the water tank is a highlight, disguised in the form of a tower.

The frames are attached directly to the main structure

The structure is defined by the double-height, steel profile porticoes, which intersect at approximately seven metres. The frames are constructed of prefabricated concrete slabs. The carpentry frames of the façade are fixed directly to the main structure and divided with modulated closure elements of approximately 1 by 0.5 metres. Different types of windows (fixed, guillotine or pivot) are installed on these.

All the materials appear and are left as they are, without paint, including the electrical installations and visible tubes. The Smithsons stated their intention to renounce the system of large standardised elements and to opt instead for components produced industrially in England.

The framework of the structure was designed in pre-welded steel, with floors and roofs made from prefabricated concrete slabs.

Different materials have been used for the floors. In the classrooms and workshops they put down plastic tiles in black or dark brown. In the circulation corridors there is terrazzo, and in the main hall and gym, wooden flooring. The interior courtyards and play areas were covered with grass and exposed concrete slabs.

They used yellowish bricks with a thin whitish layer to reduce their porosity in the solid panels of both the façade and the main hall, to shut off the view of the upper floor, in the gym, the classroom walls and for the auxiliary buildings.

The façades which surround the classroom area were structures with glazed panels of the same height as the spaces they protected, which allows for the entrance of natural light and also the heat of direct sun in summer and the cold of winter. This meant unfavourable conditions for the students for a large part of the year.

The door frames were made of unpainted, galvanized steel. 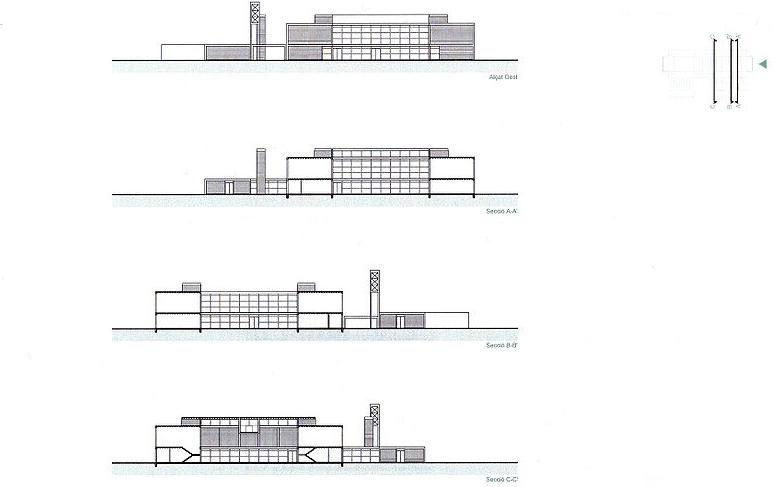 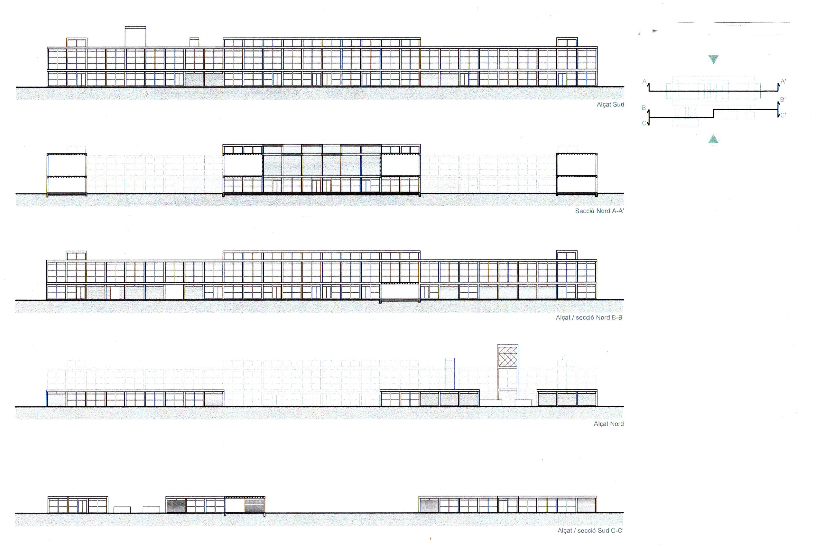 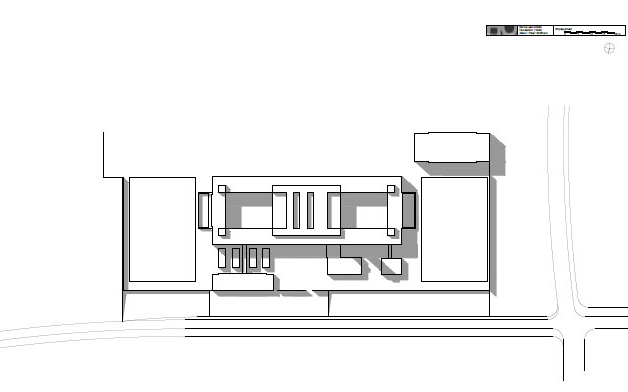 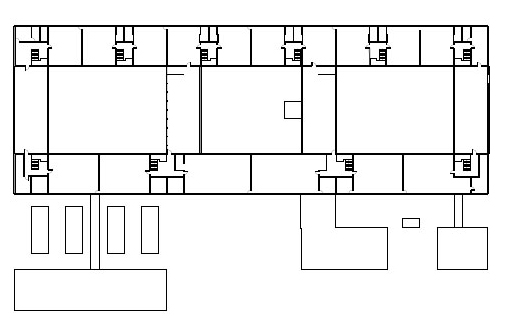 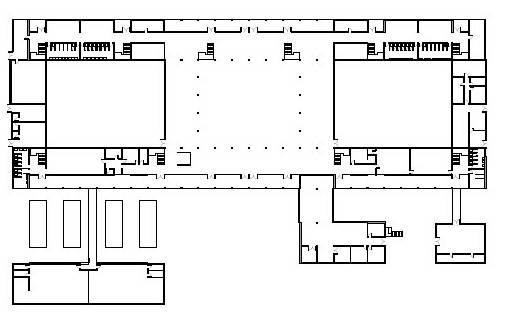 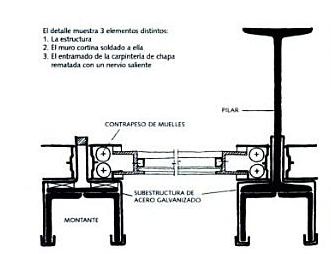 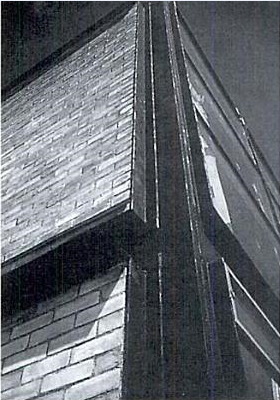 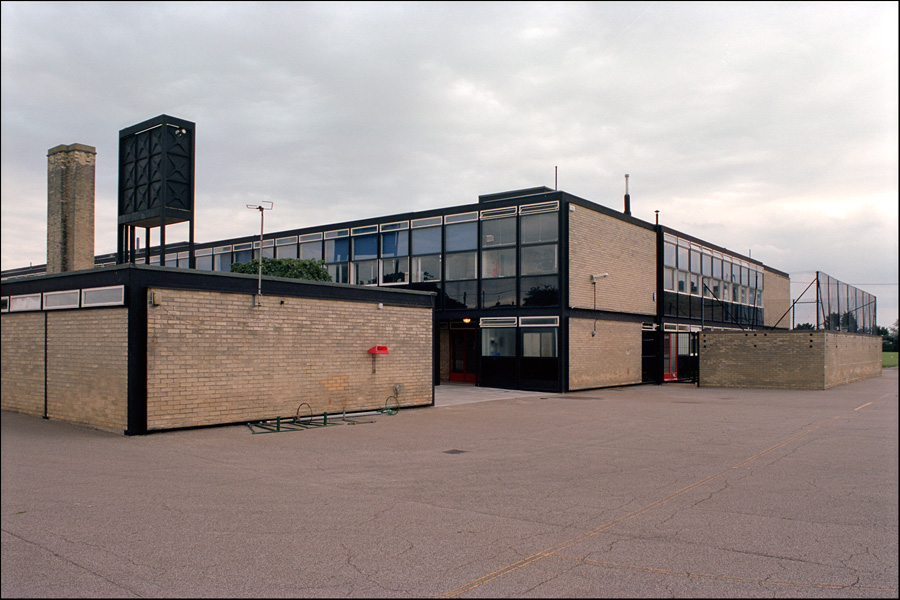 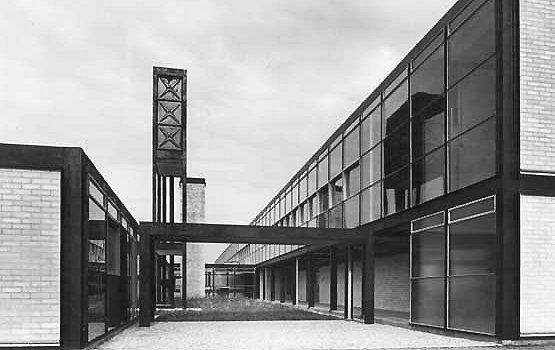 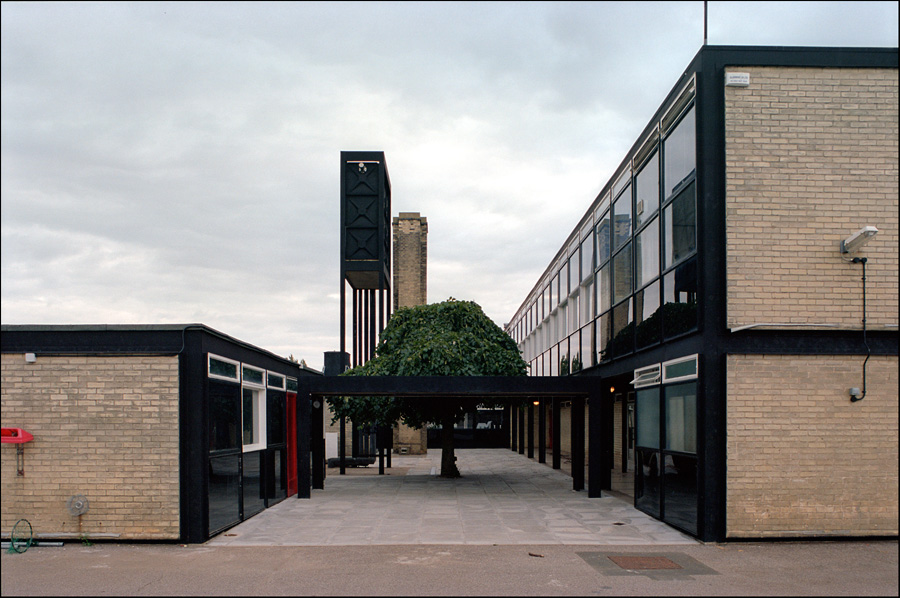 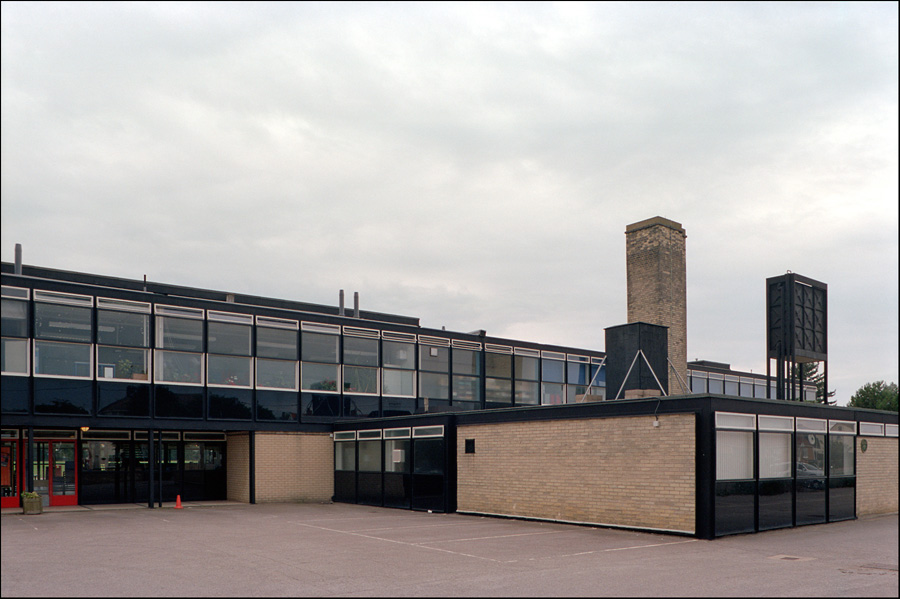 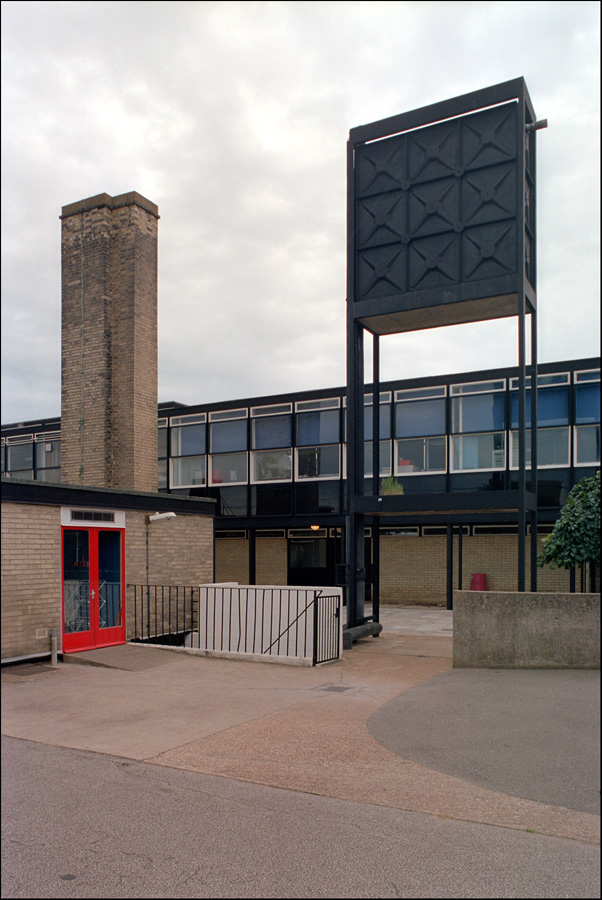 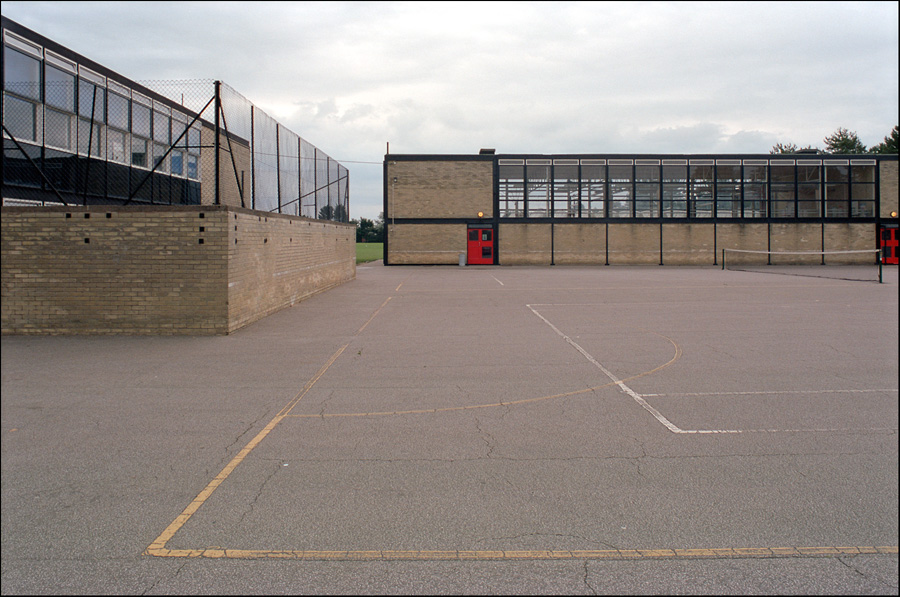 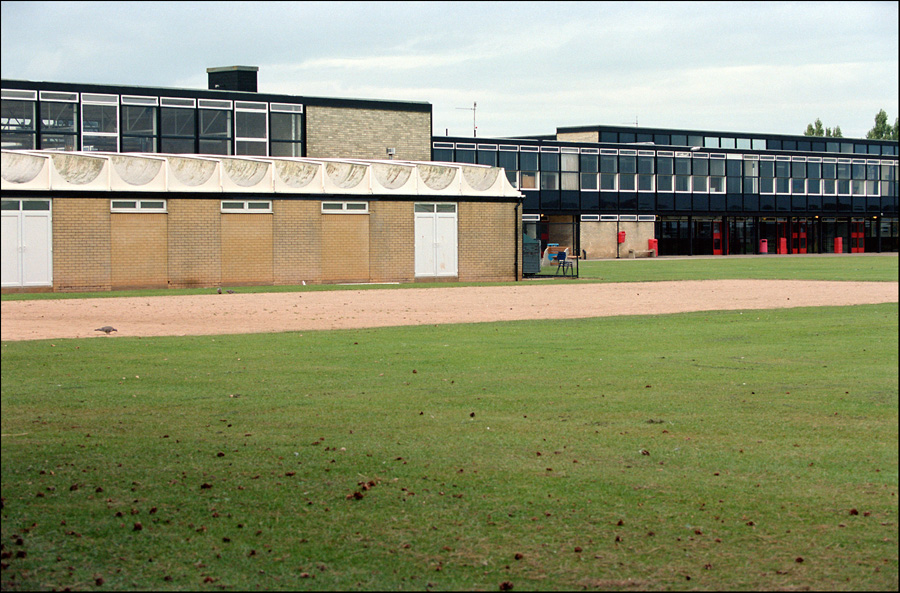