The work caused a heated controversy in the 1930s by combining organic Mexican architecture and architectural murals with functionalism. So was the breaking of all the aesthetic paradigms of architecture in Mexico until then, to incorporate such blunt theories and thoughts as most avant-garde architects (as Le Corbusier) were developing on the European continent. Thoughts such as the rational use of materials, analysis of the functioning of ideal spaces and the adequacy of them to accomodate activities that took place within them – ideas that were radical at first but eventually were assimilated into the worldwide architectural community. These houses were made possible with minimum cost and effort. 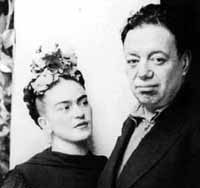 The Mexican painter and architect Juan O’Gorman, a personal friend of Diego Rivera, was in charge of the project. The history of Home-Studio begins when O’Gorman buys two plots. To show the place to Rivera, the architect offered to sell it at the same price as if he had purchased the buildings of his home and studio. Diego Rivera agreed and also made it a home for his wife, Frida Kahlo.

There, Frida consolidated her painting career to create works as a painter “What Gave Me Water”, “The Watchful Eye”, “The Late Dimas” and “The Two Fridas.” For his part, Diego painted about three thousand works in the studio, including most of his easel work. This particular space was to house their collection of skulls and Judas, as well as many works of pre-Columbian art and Mexican crafts.

The muralist stayed in that house until the day of his death on November 24, 1957. After their death, the two houses were inherited her daughter, Ruth Rivera Marin, who donated them to the Instituto Nacional de Bellas Artes.

Diego Rivera Studio Museum was established by presidential decree in 1981, opening its doors in 1986. In 1994, the INBA made the restoration and rehabilitation of houses a cultural heritage site of the nation, according to the decree published in the Diario Oficial on March 25, 1998.

The museum exhibits on an ongoing study of Diego Rivera, with his work materials such as brushes and pigments, crafts, prehispanic pieces, Judas and personal belongings. Also exhibited in the space used by Frida are her paintings and personal effects. Periodically, samples are installed temporarily relating to the couple who lived here until his transfer to the home of Coyoacan. During the years of the museum were more than 250 exhibitions of cultural work, many of them traveling from Mexico, United States, Spain, New Zealand, Central and South America. It has edited and published some 70 books and catalogs which delve into the knowledge of art and life of Kahlo, Rivera, O’Gorman and other artists. It has provided workshops, lectures, book presentations, guided tours and photographic support to cultural institutions and companies and publishing houses.

The two houses are in the same plot at the corner of Altavista Palmas and the Delegation of Álvaro Obregón, in the traditional Colonia San Angel of Mexico City. They differ completely from the rest of the neighborhood and just identify with the natural and built environment through the colors and cacti.

O Gorman, heir to the Dutch school of architecture and Le Corbusier, specially designed this house for the couple, which is one of the first examples of functionalist architecture.

Taking the fundamental ideas of Le Corbusier on the machinery of living and its 5 points, and reconsider the conditions experienced in Mexico, housing problems resolved with the least cost.

He created a home made up of two concrete blocks smooth, independent of one another and linked by a narrow bridge that joins the rooftops. A block is red and represents Diego. The other is blue, representing Frida. The bridge that unites them is the bond of love between them. It also complies with the 5 points above Le Corbusier, with the house on stilts, free plants, free facades, garden terrace and elongated windows.

The play shows its skeleton of steel pipes, escalators and materials economy. In turn, is a house with his Mexican colors, textures and floors of their encirclement of cactus. It’s a factory, a machine for living, the machinery of art where Frida and Diego produced a world aesthetic large in Mexico, its history, its people, their problems and their dreams.

The house consists of two blocks binoculars, simple, plain concrete with large windows. In block red Diego Rivera had his studio and its rooms, while in the block were the blue spaces of Frida Kahlo.

The work is conceived as a machine that looks light. The vents are located to the north picked up the diffused light that allows a uniform illumination and does not alter the colors on the painting. Through the large mullioned windows of the slabs are trying to achieve a superior lighting control.

An outside staircase from a window located on the second floor of the block, giving the blue roof. There used to take Frida sunbathing.

A cactus fence surrounding the building and relates to the environment.

The structure is independent of reinforced concrete.