The project “Petrópolis em Casa” won in 2004, the annual award Institute Arquitetos do Brasil / RJ, in the category buildings.

Petrópolis in the state of Rio de Janeiro, was the summer of the imperial family. Just 60 kilometers north of the second capital of Brazil, Petrópolis rises 830 meters on Guanabara Bay, on the edge of the road in 1720 became the new route between Rio and Minas Gerais. The strong historical imprint, which gives the nickname of Petrópolis Imperial City, in contrast to a rough spot, virgin for the most part, admitted that since the typical home colorful and rustic to the more sharp expressions of rationalism, a legacy of Le Corbusier that Brazil manifested in its monuments and its domestic architecture constantly. The strong influence of Le Corbusier (Oscar Niemeyer and his disciple) is more evident and relevant in the slope of a hill in a forest clearing, which in the big city. Brazil is a land of contrasts and the rationalism that is doing very well. In Brazil, rationalism not only survives, it is a sign of identity.

Located in the mountainous region of the Municipality of Petrópolis, State of Rio de Janeiro, Brazil

Some of the initial requirements of this summer house located in an area with few trees and decline compared to the environment:

A volume of 10 cubic meters of white side, aligned to the upper limit of the lot, was the answer.

When people are not at home, the strength of the cube is restored by closing the curtains, metal guaranteeing the safety of the house. When the curtains open, large glass openings allow plenty of clarity and panoramic views.

The accuracy and robustness of the white cube is in contrast a flexible housing environments that enables constant interaction between them and with the outside.

The internal spaces are oriented toward the best view in the east. Although the volume of the cube defines clearly the area of housing, there is a strong relationship interior / exterior.

Spaces “semiexternos, pergolas covered with concrete, are essential for these interactions. The windows of the house are open to these areas, oriented to the east, which serve as galleries that can be locked with three large metal rolling curtains.

The two levels of the home match on two fronts with two different steps that alter the natural slope, a flat area for parking and access to the house, two meters below, in another audience, the basis, the volume of housing. Embracing the cube in two fronts, an L-shaped wall like a second skin.

The wall, painted bright green, the court determines the boundary of the land and the house connected with the site. This wall oriented access to the house, protected from moisture with buckets of excavated ground, the rain and the southeast of sight of neighbors. The wall also defines, with the pool, a square in the center, which is rotated, sits the white cube. 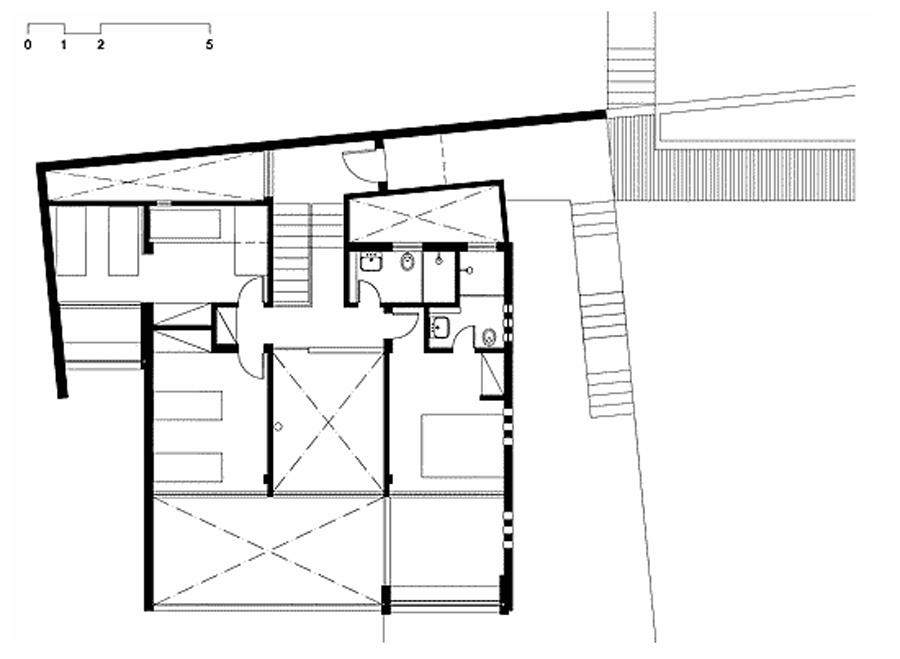 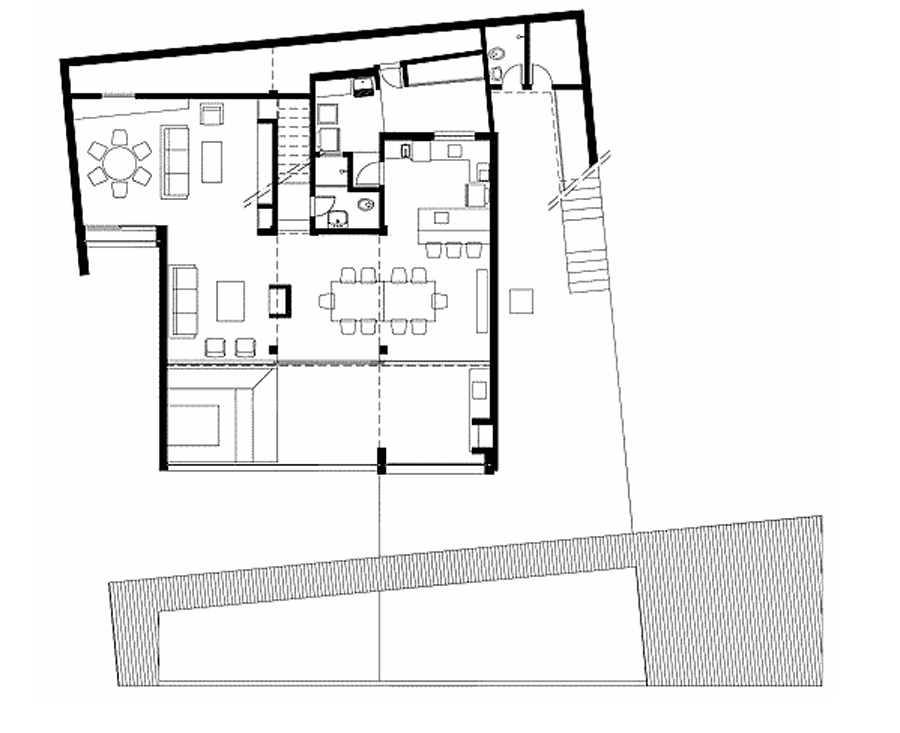 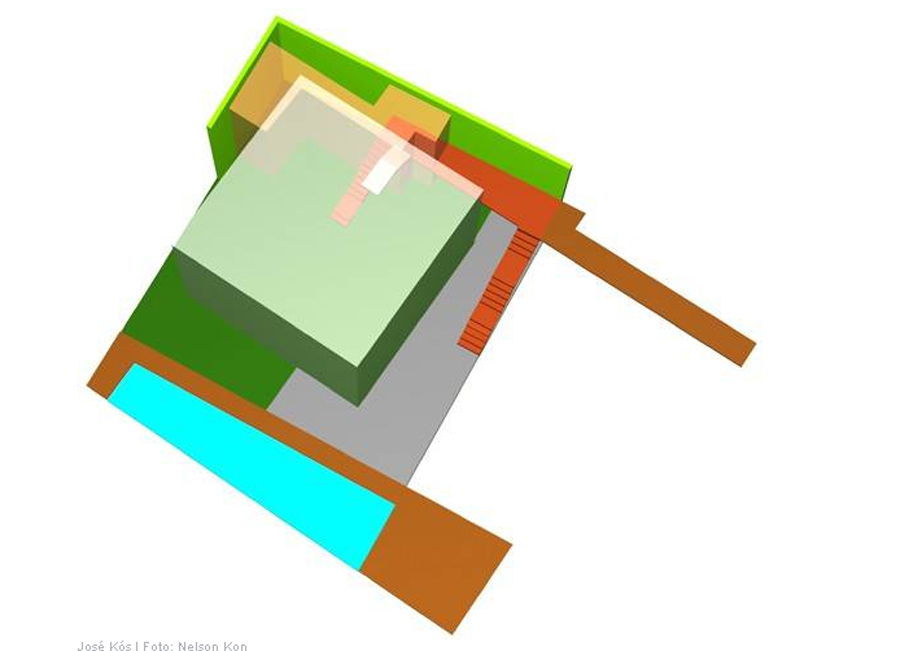 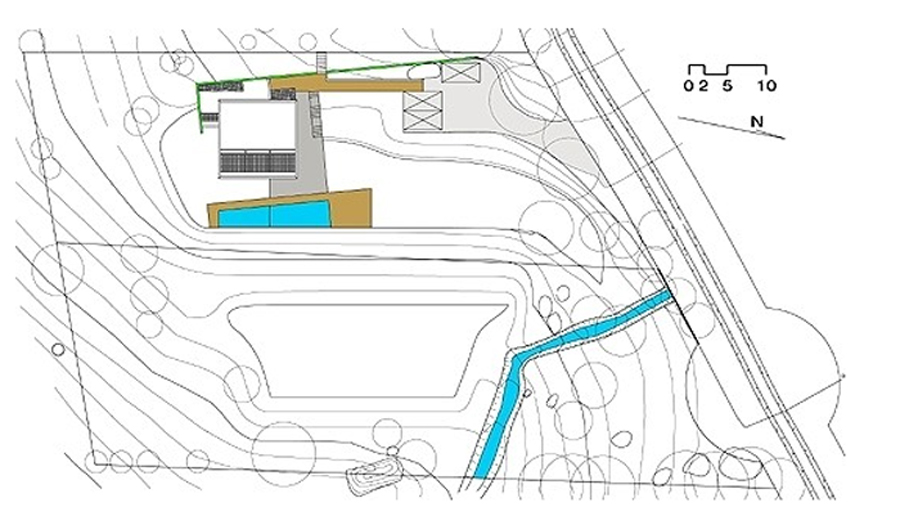 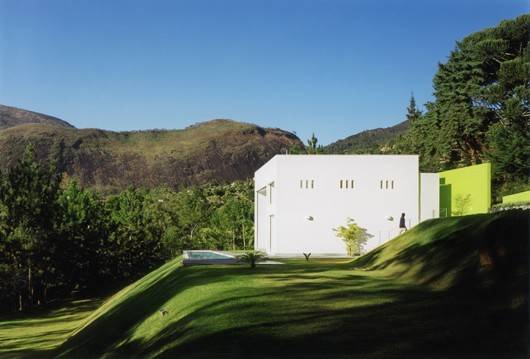 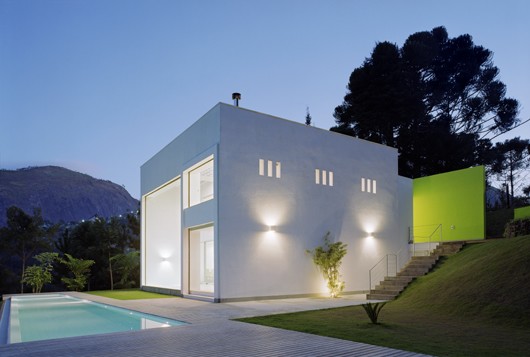 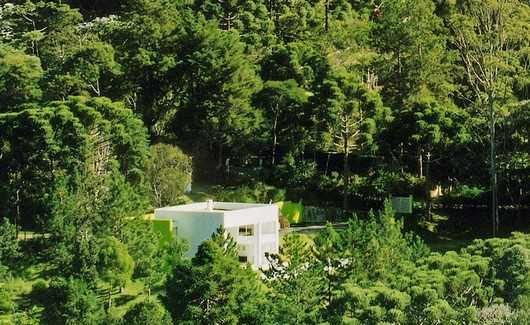 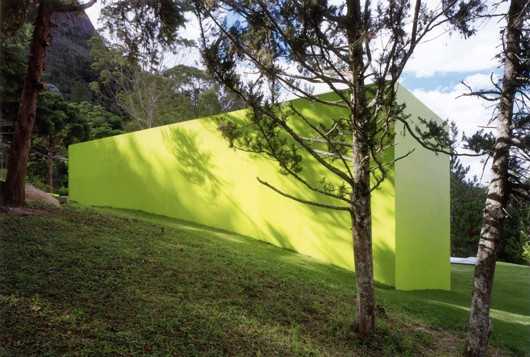 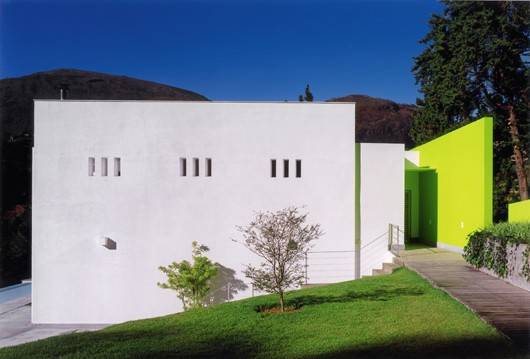 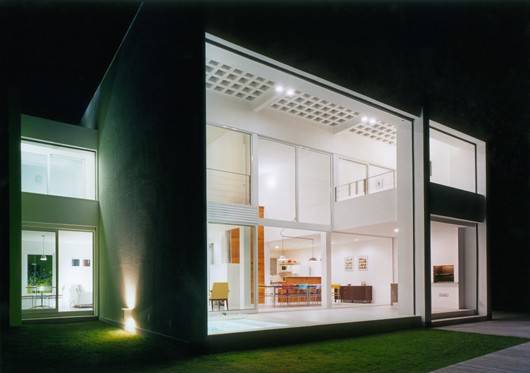 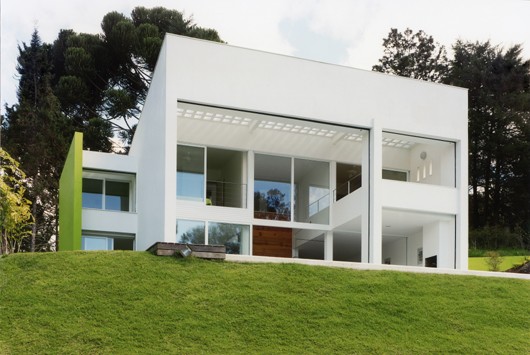 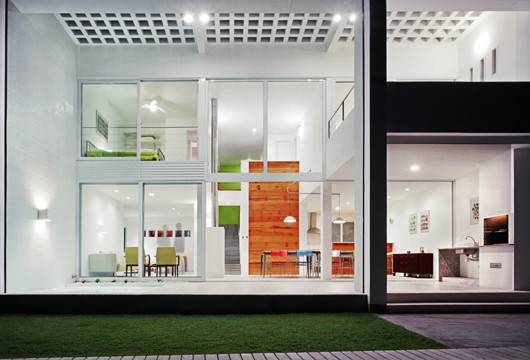 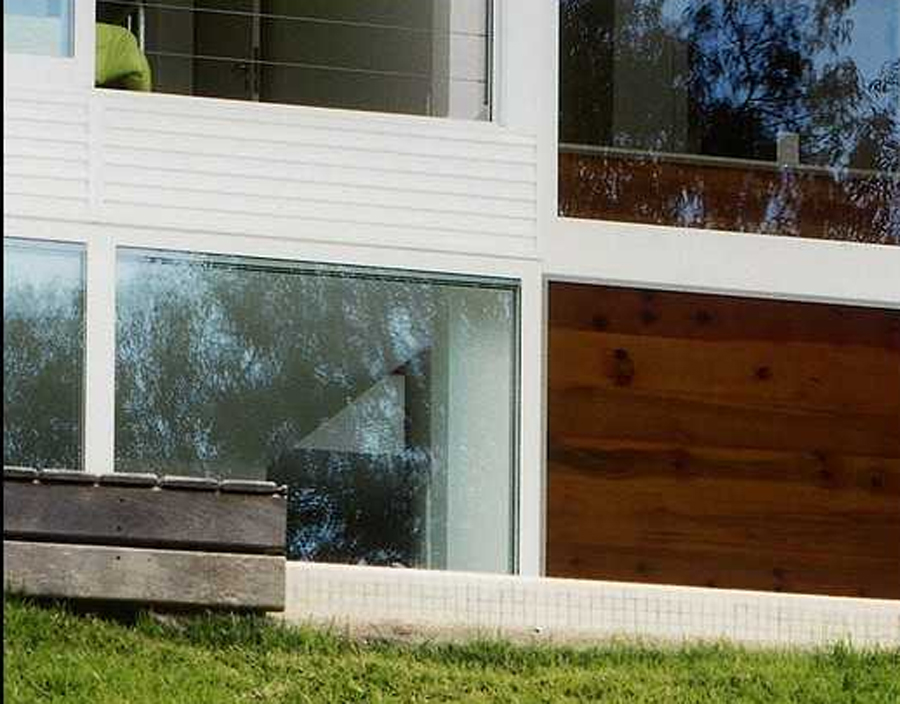 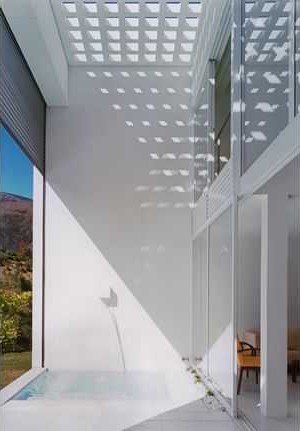 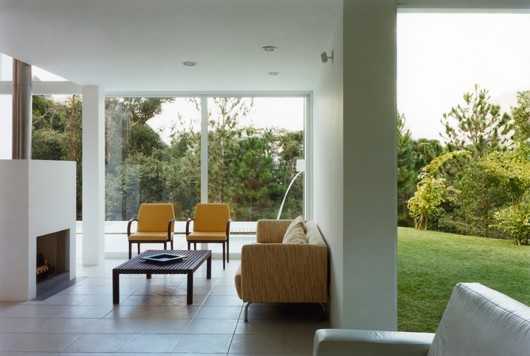 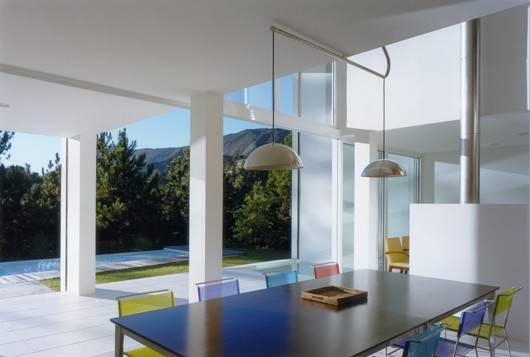 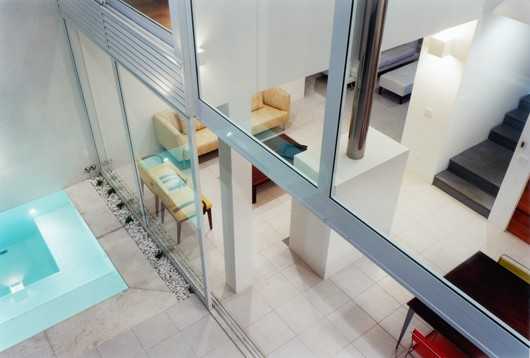 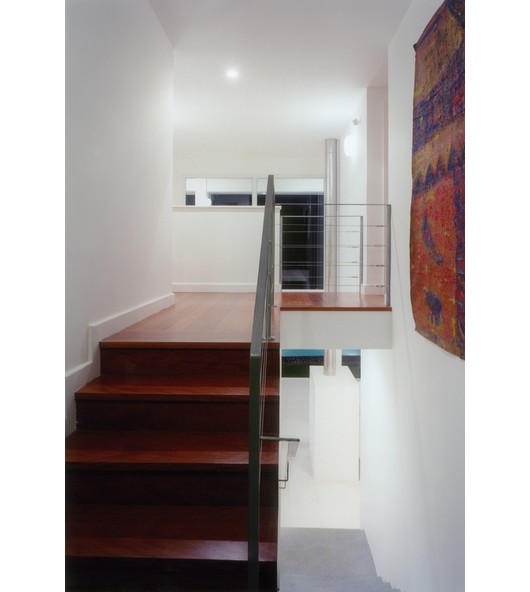