Eduardo Souto de Moura is associated with the school called Oporto Portuguese architects, headed by Alvaro Siza. In fact, he was a student of Siza and worked in his office from 1974 to 1979. It is, therefore, heir to a particular branch of the modern movement, the nature of the region that remained faithful to the cause, even during the years of the postmodern movement, to be re-discovered and celebrated internationally during the 1990s.

Souto de Moura, but it is not in any way a second-hand Siza. Its architecture is simple, clear and abstract, but they were less interested in the special qualities of the site. Their homes can be interpreted as a set of variations on a theme. This aspect of his work has much to do with Mies van der Rohe, but also has influences from other artists followed, and the American sculptor Donald Judd.

The house is simple in Moledo to minimalism, but the true simplicity is not easy to achieve. It is the result of a long and arduous process of analysis, refinement, selection and decision making difficult.

The house was built on land that was formerly farmland, with a good view over the Atlantic Ocean in a small town in northern Portugal, Moledo do Minho, belonging to the municipality of Caminha.

To Souto de Moura, site characteristics are more important than the customer’s requirements, especially where, as in Moledo, the program needs is a conventional list of rooms and the place is highly demanding: a vast expanse of a steep hillside overlooking the Atlantic coastline, terraced agricultural banks by an approximate height of 1.5 m, supported by the containment walls of stone.

Souto de Moura was already addressed before a similar spot in a house in Baiao, but Moledo, the terraces were very close, with narrow stairs and too low to provide a comfortable platform on which to build. Therefore, convinced the client of the desirability of completely re-shape the slope, with fewer beds and wider. This process was delayed several years and finally was more expensive than the house itself.

The recovery of the house is a topic investigated by Souto de Moura for many years.

By observing the evolution of his research seems obvious that constantly come to a kind of pattern based on a floor of a rectangular shape with two or three sides and a blind forehead, usually formed by a wall of stained glass whose elements are aligned with the facade main house. The space distribution and service areas occupy the interior generated.

This typology is derived from the idea of a release with a series of enclosed spaces that generate functionally hierarchical.

In Moledo is in the front facade where are the best visual (the city, ocean, etc..), But Souto de Moura using an outcropping of rock in the back of the house as an extra visual reaffirming further the link between the environment and the interior of the house, which also gives the feeling of shelter. This is accompanied by the construction of reinforced concrete walls coated in stone, physically introducing the existence of this element and imposing rough.

At the front between two blind walls lies a large sliding glass overlooking the ocean, behind which lie the different areas of the house: a terrace, kitchen, dining room, three bedrooms, two bathrooms, a cloakroom, dressing room, patio and a service corridor that runs across the building facade that faces the mountain.

Redo platforms to develop a ground was laborious and resulted in a lot of work and material, master masons and six truckloads of stone to help do.

Blind side walls are erected with irregular blocks of granite, are anchored in dry as well as the sides that frame the front glass wall.

These walls are generated by two parallel stone walls whose area of 4 cm has been completed by insulation, the conductivity of the rock is generally high and it was necessary to isolate the cold and heat. Above it is displayed flat roof.

The interior walls that divide the various rooms are concrete and plaster and wood furniture is fixed, as part of the original construction. Some walls, like the fireplace or some corner of the kitchen was left before the stone wall.

The roof is composed of a porous concrete floor, covered with an insulating layer formed by an impermeable material and a layer of crushed rock. The funnels gutters and water collection are of stainless steel sheet, like the skylights that vent out of it. It also highlights the vent of the chimney which is in the living room.

The windows are sliding glass front of a camera and woodworks. Those that give to the mountain but the camera also trim are aluminum and glass mirrors.

The interior floors are of wooden slats and the outer shelf is also made of wood slats with one inch of distance between themselves and set a strip orthogonal. 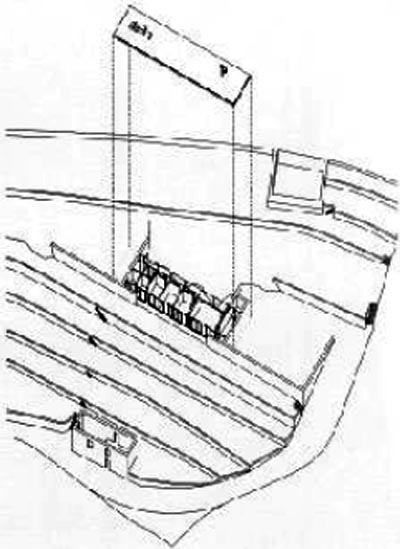 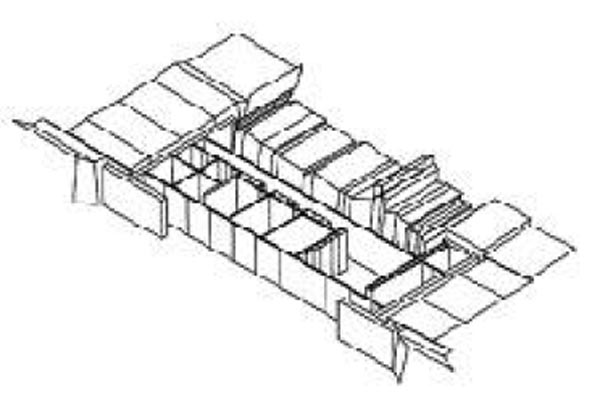 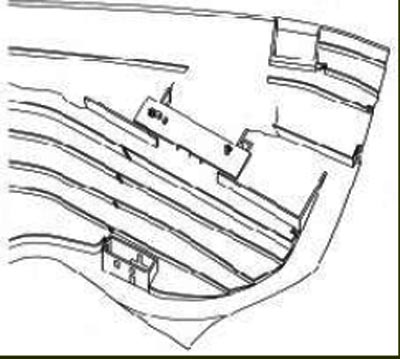 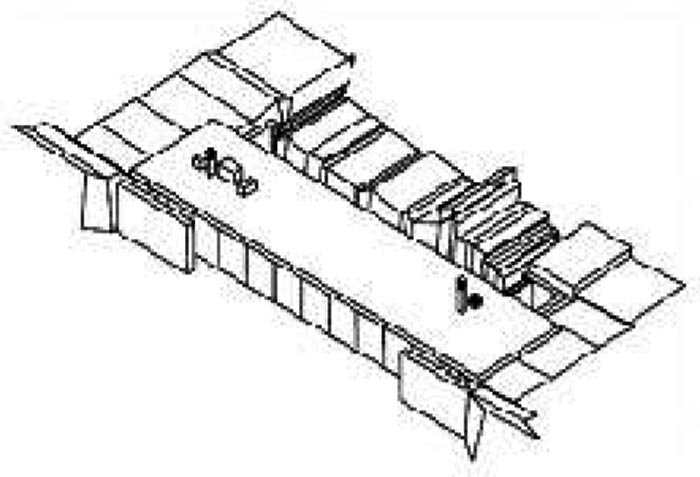 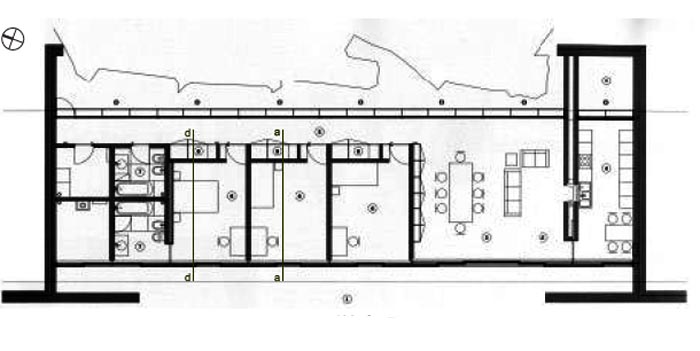 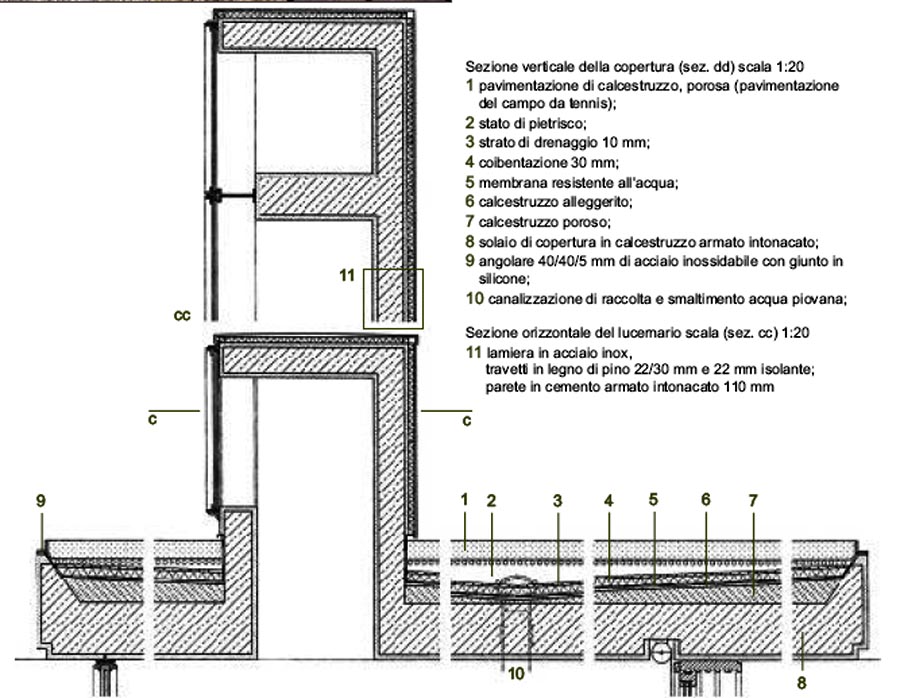 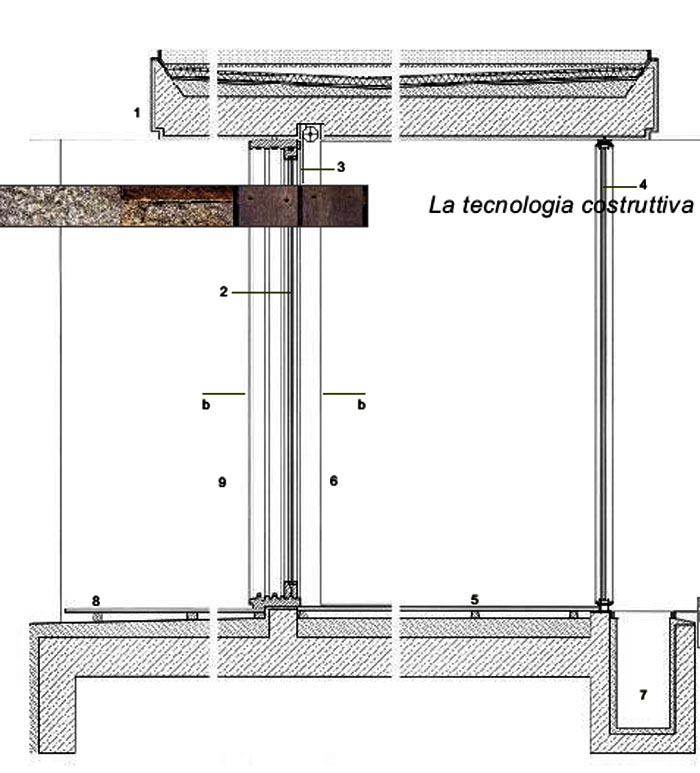 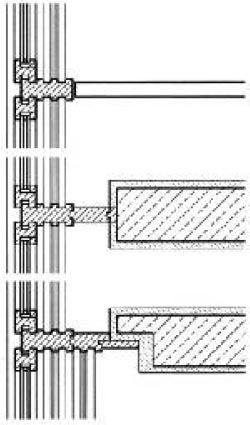 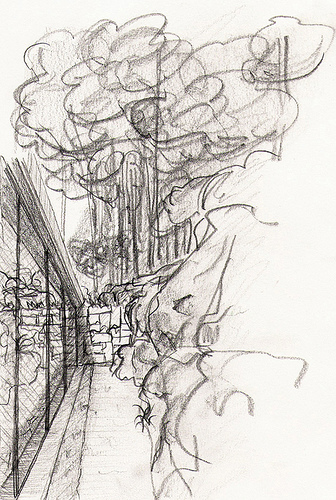 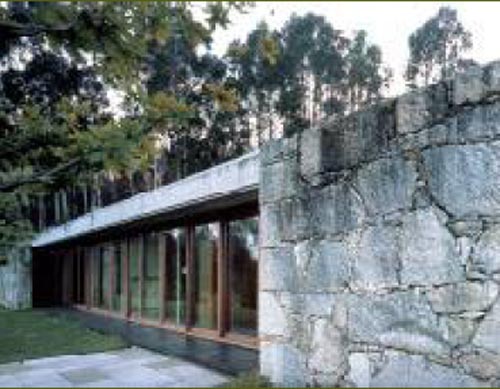 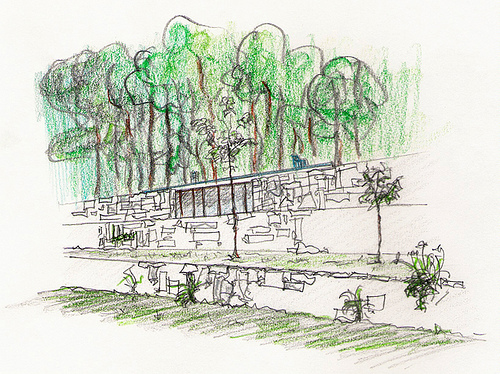 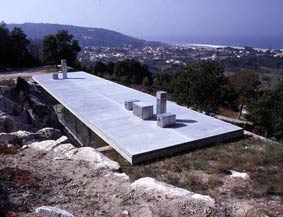 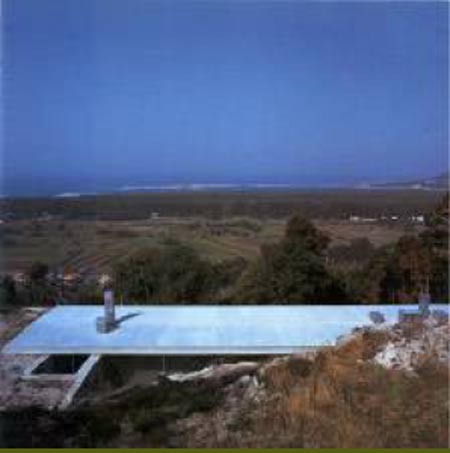 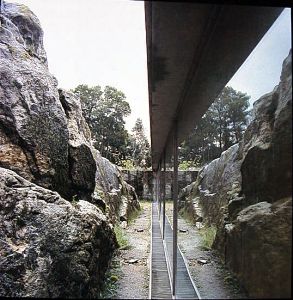 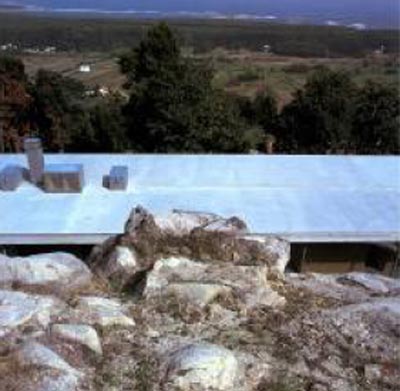 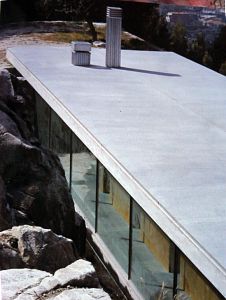 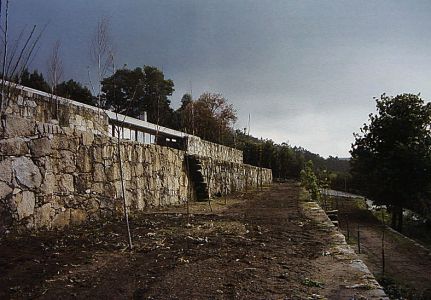 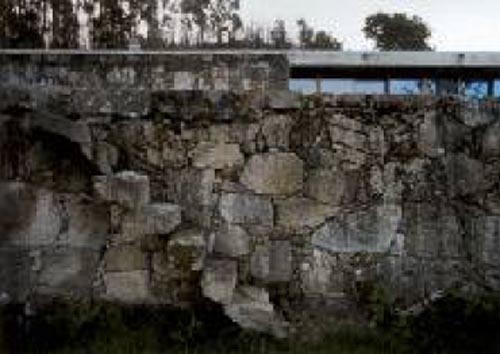 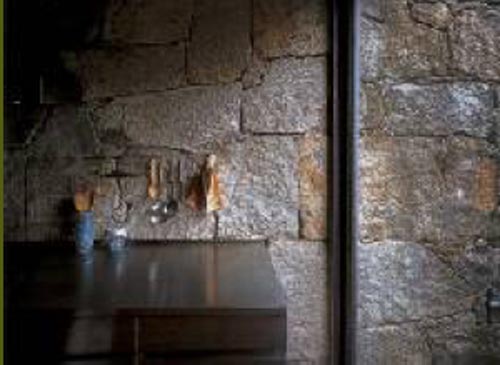 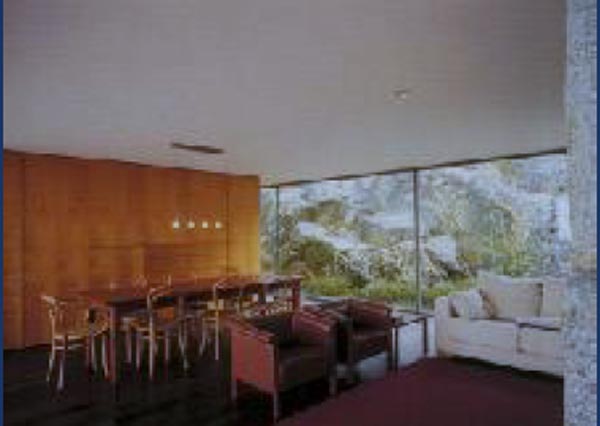 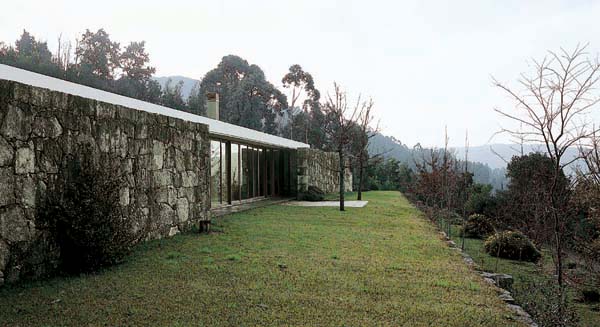 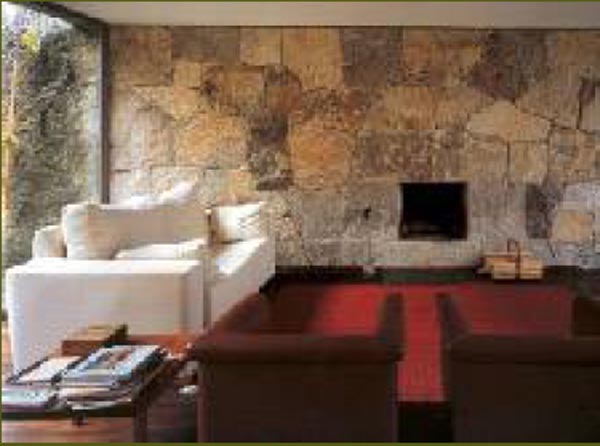 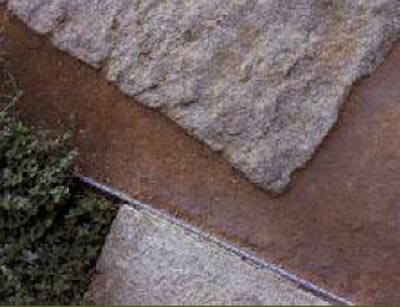 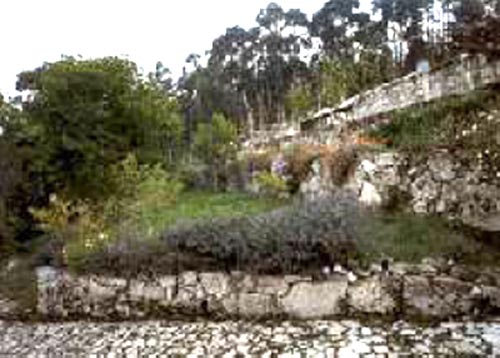