The architectural vocabulary of Aris Konstantinidis is simple and identifiable, walls and stone structures that support bare concrete beams. His logic planning is influenced by the modernist repertoire, rigid grid pattern, adapted to regional climatic conditions. His buildings show a delicate and unique design, understanding of materials, use of light in relation to the interior and exterior spaces of the building and its placement to embrace the landscape. To Konstantinidis, a building is a form that is never final or complete. This is a form which is completed with the passage of time and is renewed again in the daily perfection.

In the project Konstantinidis combines modern spirit with the ancient tradition of the country, creating a sober building a structure that integrates the landscape as if it had always been in place.

The house was built a few meters from the sea, on a small rocky promontory, at kilometer 48 of the road from Athens to Sounion,in Anavyssos, Attica, Greece.

Kostantinidis built his “houses of stone” only when they are compatible with the natural environment, where the ground was rocky, when there was a nearby quarry or where the man had already marked the territory with stone, rough stone blocks or gypsum for example in the construction of roads, walls, folds for sheep, etc.. The stone was used by Konstantinidis just as has been used for thousands of years by the builders, farmers and shepherds. Its functionality and size were exploited as well as its cheapness and potential for reuse.

To design this house, used the criteria of proportionality and functionality that have been followed and respected since time immemorial by anonymous builders who made the unique and special landscape of Greece. Its stone houses seem to grow from the earth like a plant, integrating beautifully into the surrounding landscape.

The single volume made ​​at human scale with formal austerity and their harmonious incorporation into the landscape has become a symbol of Greek architecture of the twentieth century.

It is a home that meets the minimum basic needs of its inhabitants. Its rectangular plan is organized on a grid of 2x5m in a living room with fireplace, a bedroom, a bathroom and a kitchen are located.

All floor opens to a covered porch, then flat concrete slab roof serving housing and abroad rests on 6 rectangular stone pillars. The terrace creates another maya as “L”, of 2x3m, surrounding the house by the west and northwest sides. The house has another small terrace on the angle between the three rooms.

The main material used in this house is the local stone, although its use is not associated with the rural way of construction. Rather use the wisdom of providing construction, relying composition of spaces and rhythms to a philosophy similar to that of Mies van der Rohe and giving a lesson on tectonic forcing to reflect on the richness and complexity of simple shapes. This beach house built for military K. Papapanayotou, belongs to the series of houses known as “Stone Houses”.

On the robust structural stone walls of the facades has been built with a flat roof on inverted beams and concrete.
The interior furnishings has been reduced to the bare minimum. 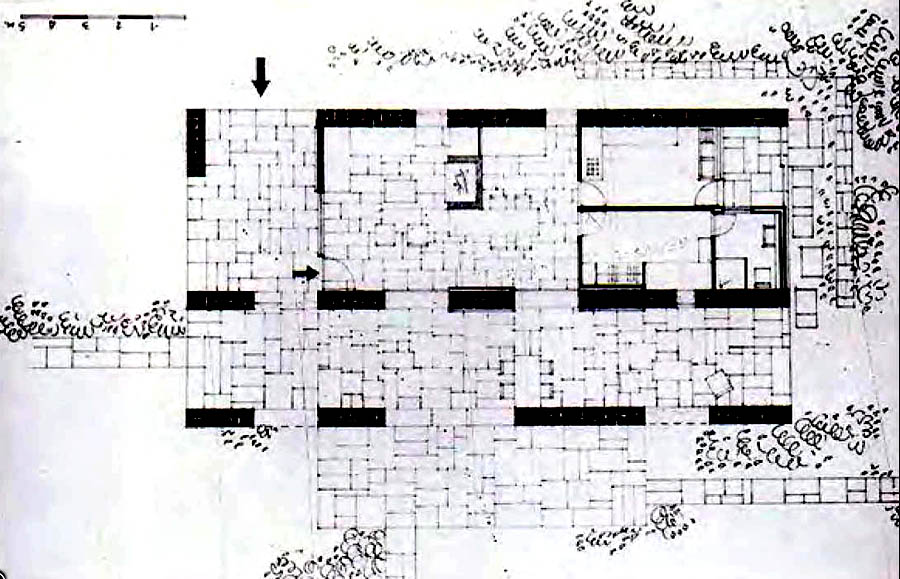 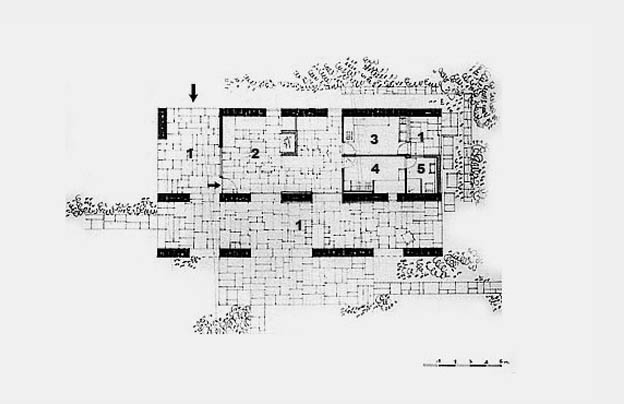 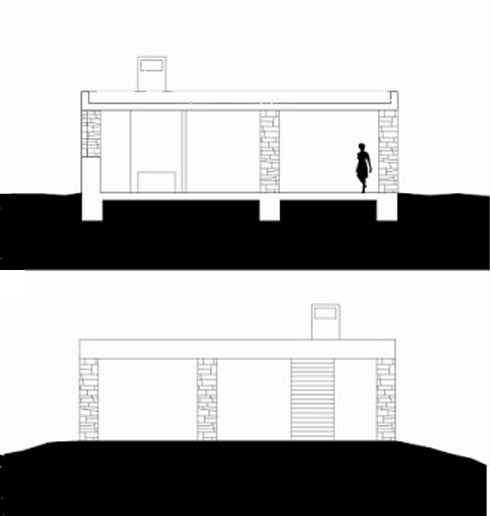 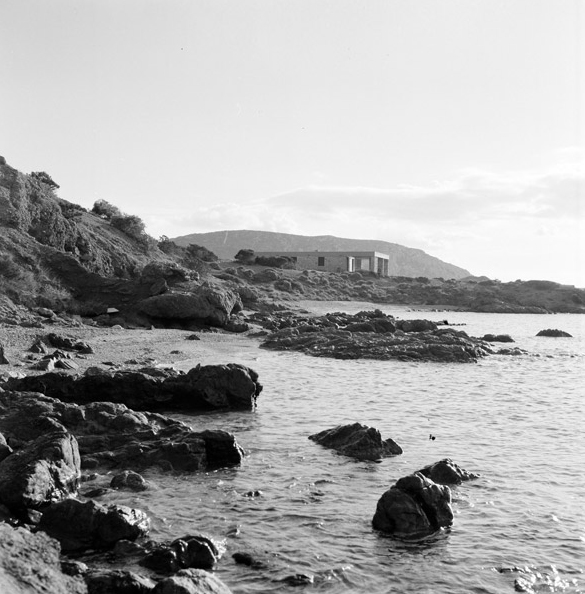 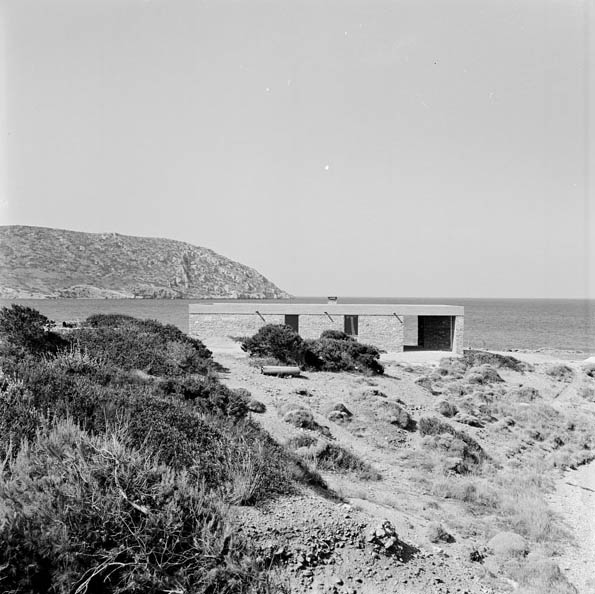 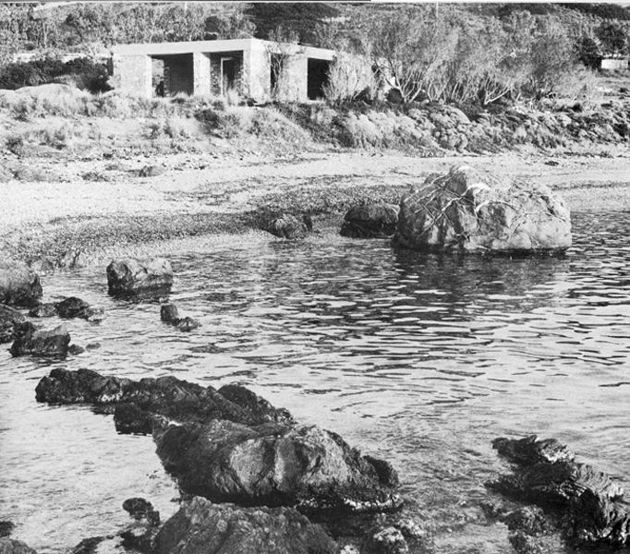 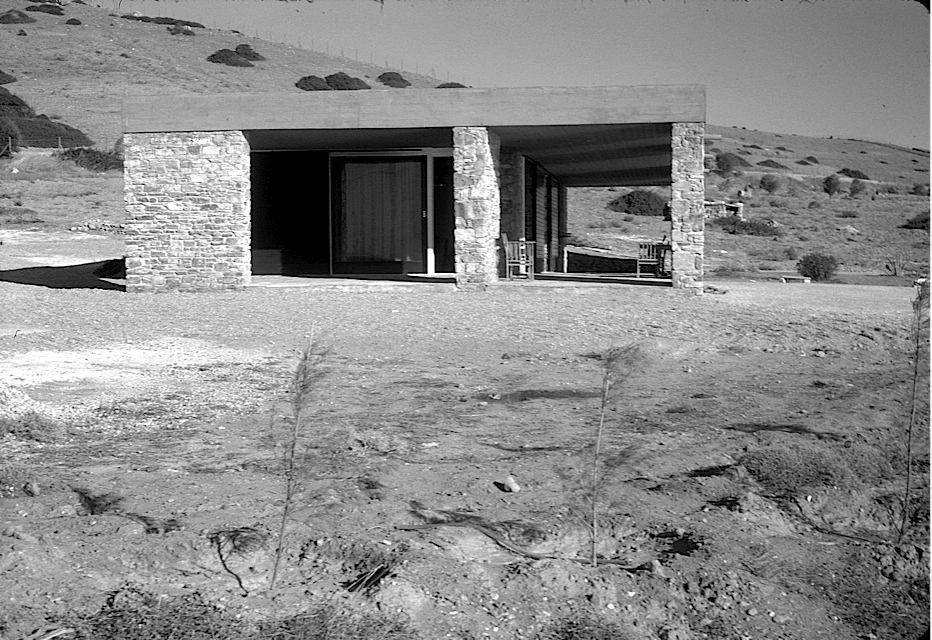 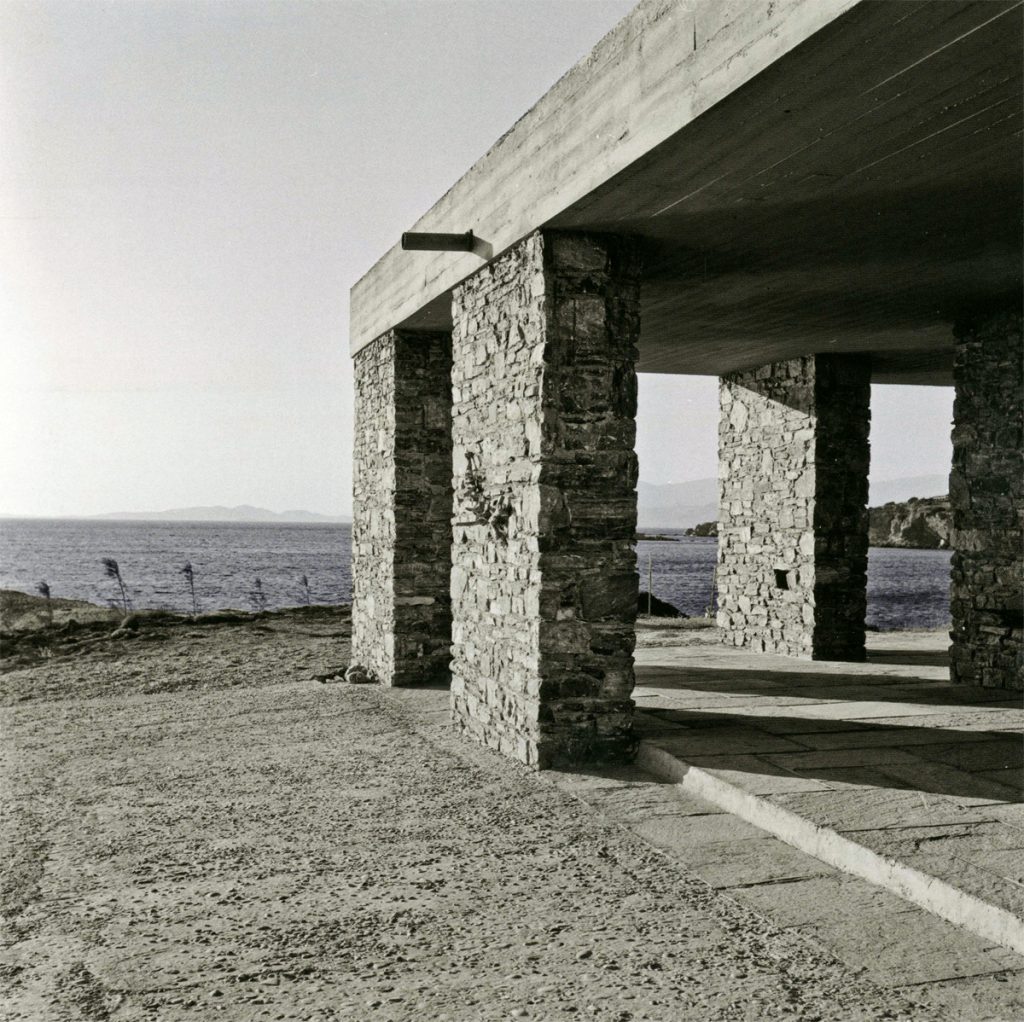 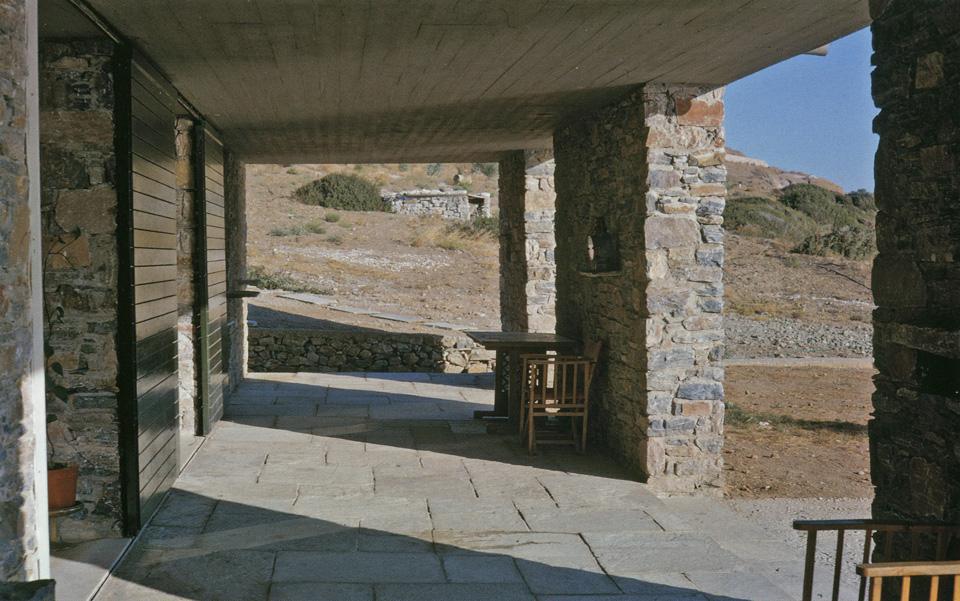 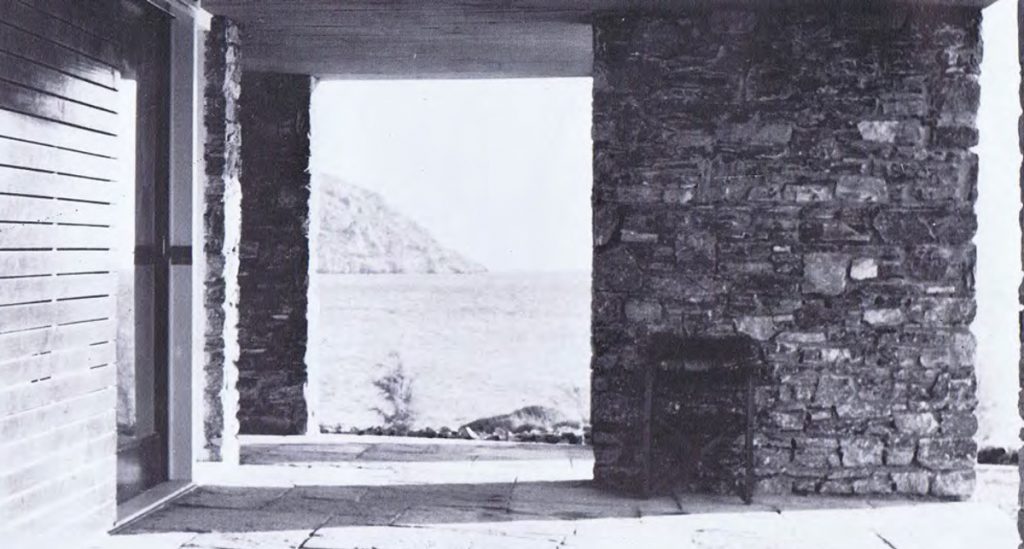 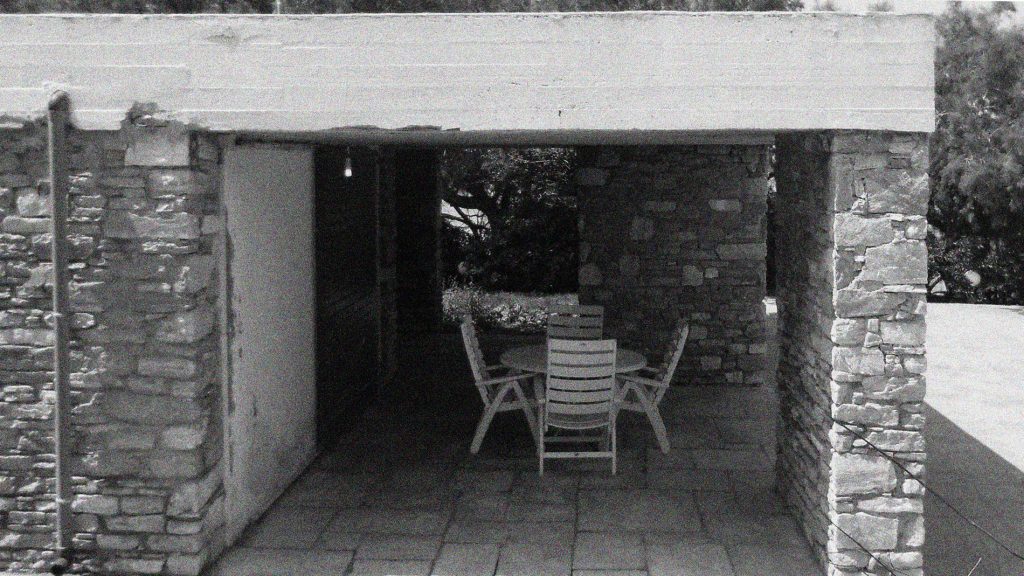