This is the final project of the subject ‘Projects 2’ at the college of architecture ETSAB in Barcelona in 2005-2006.

Two sisters, who have an excellent relationship between them and share the ownership and direction of an editorial dedicated to promoting books of philosophy, are owners of an old family plot in Garrotxa, Spain. They are of a certain age. Their children are becoming independent. And together with their partners, they have decided to build in this estate a new shared house where they wish to conduct their work, near the tranquility given by nature and away from the pressures and tensions generated by the city. Although the four of them often live at home, the sisters’ partners, for professional reasons, do not necessarily always reside in it.

Inside the estate, it has been decided to concentrate the construction where it is described in the attached map: a clear forest accessible by a path. In which existing topographic irregularity diminishes by the presence of an ancient retaining wall that defines a signal in the landscape and supports the new deployment. Due to the weather conditions of the area where the house is located, it is advisable to use sloped roofs. A suggestion which does not prejudge in any case the finishing material of the roof.

The program that is intended to be developed in the site consists of several elements.

1-”’ A main house, where each sister can enjoy some privacy, a common kitchen and main dining room. Shall consist of:

1.1– 2 apartments with private bedroom, dressing room, bathroom and private lounge. The total area of all placements for each of them will be about 50 square meters.

1.2– Common elements of the house: a living room, a dining room for 10 people and a kitchen with a breakfast table for 4 people. It will have an access to a small auxiliary bathroom (toilet & sink) and a room of service that will be for washing, ironing, storage and facilities of the house. The area will be about 75 square meters.

2– A workspace and three small apartments”. Shall consist of:

2.1– A workplace for the two sisters (an open space with some privacy for each of them, a meeting table for 8 people sitting comfortably and a library of 2,000 volumes). It will have an additional bathroom (washbasin + WC). The total area will be about 100 square meters.

2.2– 3 apartments for guests or casual collaborators in the editorial work. Each of them will have two beds, a sofa, a desk, a small kitchen (1 cooker + 1 water point + 1 small refrigerator) and a bathroom (shower + washbasin + WC). The total area of each of them will be about 25 square meters.

Between the two bodies a partially paved area and a porch for outdoor activity will be developed. This porch can be conceived as an independent piece or as an annex to the bodies of the building. It may also serve as a connection between them. The building must be able to handle friends meetings (up to 50 people in a party with buffet or meals with around 10-12 people in a table) and outdoor parties. As an aid to the service from the kitchen or catering companies, it will have a bar with the possibility of installing cookers, a barbecue and a sink. The area will be about 175 square meters.

4.1– There will be a covered parking area serving the entire building, preferably to accommodate four cars.

4.2– There must be place for three other parked cars, preferably covered, next to the first or in an adjacent area.

The project’s intention is to respect the fact of being around nature. Trying not to do excessive deforestation and embankments that could change the environment. To achieve that, two buildings whose shape is similar to the level curves of the mountains were planned, so that mountain and building were the same height. Also using the convexity of the curves to be opened or closed to the landscape as it’s needed by each space. 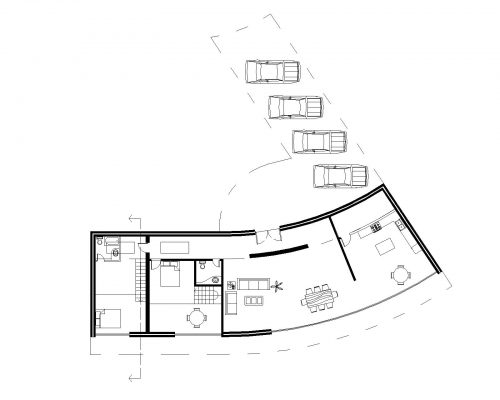 The main building is designed as a home viewpoint. Taking advantage of the fact that secondary spaces in conventional houses such as guest room or studio are in a separate building, the designer has chosen not to create more space than required by giving a broad and tall form that can be used for several simultaneous activities, with minimum vertical division.

Two roof types mark the two main parts of the house, leaving the passage area under the lowest flat roof and the common use spaces below the higher inclined roof.

The project did not require any closed garage, but it was appropriate as there could be a large number of parked vehicles simultaneously if both the residents and their guests arrive all with their own cars.

For this reason, an open porch was created at the rear of the house with capacity for between 4 and 5 cars. This porch would be able to shelter vehicles and their occupants from inclement weather that may arise in the area, such as rain, snow or even the summer sun.

In case that more vehicles arrive to the building they could park without problems in the drive that precedes the car porch. Given that those would be rare cases, that would not create a problem.

The entrance is confronted with a wall that divides the passage area from the room, thus making the entrance to the house more progressive and demarcating together with the flat roof what might be called a wide open corridor. The entry wall also allows the creation of a hall space where you could find hangers for clothes, umbrellas, mats, auxiliary tables, etc.

The kitchen is located in the eastern edge of the building, not only to keep its noise and smell out of the bedrooms but also to supply the external bar in the parties.

Its space is enclosed by a wall that does not finalize, leaving a wide and permanently open way between the kitchen and the living room.

Behind the kitchen, in the north side, there is the service room for the house, containing cleaning equipment, boilers, air conditioning machines, etc.

The kitchen itself is arranged in L-shape with a central island, which also contributes to a good circulation in the workspace. A little more toward the glass in the south side it has been arranged the round breakfast table for daily use, with capacity for up to 4 people.

Each room forms an almost autonomous nucleus inside the house, as each one has all the elements for daily life except for the kitchen.

Each room has a main floor and an upper loft, where the bed is situated. In the principal lower floor there is a small living room that each sister wanted for meeting their private guests.

The secondary building consists of two different and not communicated parts. These parts are: the part intended for work where the offices of the two sisters are located, the meeting room that can hold up a minimum of 8 people and the library with capacity for at least 2,000 volumes – the other part is the guests’ apartments.

The workspace consists of two floors with a two-story bay, which coincides with the building entrance. This space occupies the rear of the building, having that way a view to the mountainside and opening at its northern front in its entirety to provide the space with the maximum possible brightness without direct sun.

On the ground floor there are the two offices for both sisters and a bathroom, as well as a waiting room for visitors.

Taking advantage of the size of the floor, the designer has chosen not to close off any of the spaces other than the bathroom. Thus, the workspace of each sister is divided by a shelf which in turn will serve to house the usual books of reference such as dictionaries, etc.

On the upper floor it is the meeting room, along with the library.

A distortion in the framework of the second floor has been used to arrange the meeting table, which gives the room a space that does not interfere with the tours of other activities that could be happening, without the need of vertical walls that delineate the space explicitly.

However, this lack of privacy might seem a disadvantage, because this would mean that the privacy of the meeting would be invaded at any time. But that won’t happen because both sisters would be present at that meeting (they work together) together with the necessary people, and the daily use of the building only belongs to them, so therefore no one should interrupt or invade their meetings. 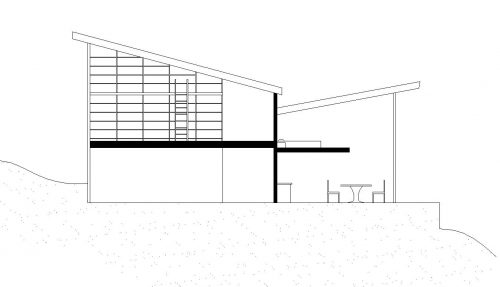 Section in which the two-story library with the runway and stairs can be seen.

The library, which is also located on the upper floor, fills the entirety of the Eastern wall and it is divided into two levels with a metal bridge that allows access to volumes located at the top.

The library planned far exceeds the needs of the project, but considering that the owners work in the publishing world and the fact that its collection will be extended over time with certainty, so a library with easy access that can hold future acquisitions has been chosen.

As already mentioned, both sisters work in the publishing world and therefore the library becomes a predominant piece in the space. Its top can be seen from the entrance of the building on the lower floor and will appear in its entirety as we ascend the stairs.

Next to the library, a large table with two chairs for the consultation and selection of books has been placed.

From the meeting room its sight is complete and never stops reminding us the profession that led its owners to construct the buildings that now house it.

The pergola that unites the two buildings contains the bar for outdoor parties.