Home for All in Rikuzentakata

“Following the earthquake and tsunami that devastated the east coast of Japan in 2011, the small town of Rikuzentakata attended renewal from the ruins. Led by Toyo Ito, a team of young Japanese designers, Kumiko Inui, Akihisa Hirata, Sou Fujimoto, has created a modest community center from the rubble, using salt water dripping trees and killed by the storm. For months the volunteers attended daily to help build the project, using the columns wood as structural supports. The city lost about 1,800 residents and more than 5,000 families left homeless by disasters. The “Home for All” project has become a beacon for the community, where the pains of the storm remain acute. Wrapped with wooden balconies and built on pillars, the structure of the debris and ruins of ancient buildings “(- Home-for-All, in February 2013 Architectural Record) looks

Many architects who have worked selflessly to rebuild the area devastated by the earthquake and subsequent tsunami that hit in 2011 Miyagi prefecture, Japan. Their contributions are voluntary efforts in most cases, above the official processes, working directly with local communities, in order to bring shelter, comfort and a little comfort to those who suffer the greatest need.

“… It’s been almost two years since the Great East Japan Earthquake. The horrific memories of the tsunami are gradually disappearing, and our lives are returning to normal. However, people in the affected areas have not recovered from their traumas, and no visible signs of reconstruction of cities. As architects, and even more as human beings, what can we deal with this reality for those people?

The question “architecture, it is possible here?” Has arisen precisely because we believe that architecture can regain its essential character only under the conditions and in such places. A small house called “Home for All” can afford to build a bond with the people in the areas affected by the disaster. We believe that through it, you may also be able to return to the primitive process architecture for development… “(Toyo Ito, 13th International Architecture Exhibition of the Venice Biennale 2012)

Rikuzentakata (陸前高田市) it is located in the southeast area of the prefecture of Iwate, Japan, bordering the Pacific Ocean to the east, coastal area which is within the boundaries of the National Park fukko Sanriku. The city contained the Lake Furukawa Numa until 2011 tsunami made it disappear. In the 2010 census the city had a population of 23,302 people, with a density of 100hab / km2, in 2014 the estimated population was 19,449, a density of 83,7hab / km2.

To agree to all participating architects with strong personalities and different ideas and was one of the most complicated tasks, especially when he had not yet decided on that site begin reconstruction. Finally one of the people responsible at the place, he called to say he had found a perfect place, a symbolic location, a vast plain at the foot of the mountain where the tsunami had swept all an empty plain leaving a clear view of the path to the ocean. From that time the work was more fluid.

Any plan to relocate a village on higher ground, out of the way of future damage may be hindered by the lack of available land or the strength of private owners. The plan itself may require massive preparatory work for a long time, such as raising the ground level with earth carried a huge undertaking that requires at least five years. In Japan, a country where land ownership is widespread and fragmented, rights on private lands are protected and the consensus is highly valued, the rebuilding is slow work.

The architects spoke with affected persons Sendai, also from Rikuzentakata, trying to find a way to help with the reconstruction of the city and improve the daily life of the community. The result was the “Home for All” a place where people can feel at home, meet, relax and talk about the future of their city. The first “Home for All” was completed in Sendai, a small traditional wooden structure that allows people to look ahead once again.

Go directly to local communities means that architects enjoy more freedom, but it also means that usually do not have access to public funds reconstruction, and many of these projects are precariously funded by private donations or charities. However, despite being of limited scope and modest scale, these projects have been most successful and appreciated by their users often official responses, with their difficult bureaucratic imperatives.

“Home for All” is not a home in the traditional sense. It looks like home in terms of scale and division, pore is not inhabited, functions as an informal meeting place for the community.

Ito describes it as “an attempt to provide places where those who have lost their homes in the tsunami can meet and enjoy a bit of breathing room.” Erected temporary housing for the homeless after the disaster offers little in terms of individuality and even comfort, so that spaces Home-For-All focus on bringing people together, serve as important nodes in a society that does not have much more in terms of public space. The function becomes the spiritual reconstruction of the community while restoring physical infrastructure is yet to start. 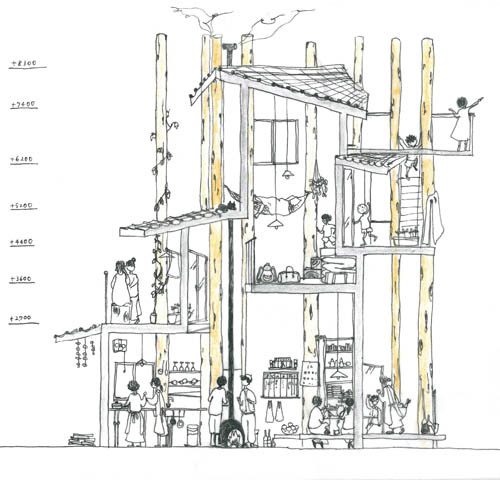 “… I hope that the building work as a welcoming place for people, and not just a symbolic space….” With these words Ito expressed his ideal architecture that serves as a way for people to have a better life. In its design both of the first houses in Sendai or raised in Rikuzentakata, architecture seeks to serve as a means for those who lost everything in the disaster find a place to rediscover hope, between the heat of people in your same situation. 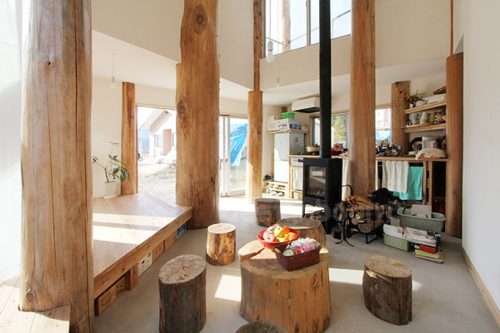 “… There is a term for the sense of solidarity often evoked in evacuation sites after a natural disaster,” utopia of disaster. ” I imagine that the situation in the community affected by the tsunami is a kind of “utopia disaster.” The problem is that these communities are inevitably short. Therefore, members crave a meeting place to preserve their ties. This place has to be not only functional but also symbolic. If it is a building, for example, the building must incorporate a shared symbolic quality that brings back to life memories.
Dealing with the symbolism is not exactly my area of ​​expertise, and I’m not the kind of architect with a prolific vocabulary of styles. But working with the Mr. Fujimoto and Mr. Hirata, two different architects each other, and me, helped me cope with what I felt was my weak point. And this was a very valuable experience… ”

“… However, the project offered the curious experience of witnessing a building getting his own way. The unmistakable pillar structure of the Home for All in Rikuzentakata, for example, was already there in the first model of Mr. Hirata. The actual material is inspired by the history of Japanese cedar forests destroyed by the tsunami, and around the floats used in the local festival of Tanabata. All these elements came together and gave the building tangible form.
Before the project started was not sure I’m ready to think in architecture after the Great East Japan Earthquake. But at some point, I realized that “architecture” was there in Rikuzentakata, as it has always been. I will never forget the moment when the fog in my mind cleared and I could see the true nature of architecture… ”

“… I have always sought a new approach to architecture, I try to think about it in abstract terms… where he started and finished. But Rikuzentakata, the place itself was full of symbolism. Our mission was to restore links between people who had been cut off by the disaster. I felt the building was the beginning of a community as well as the beginning of architecture.
Another thing that I present to the project was the “symbolism”. Architectural features such as pillars representing a grove and vertical structure that represents a tower of fire all came from this question of symbolism. I also wanted to incorporate into the building Rikuzentakata topographic elements, surrounded by mountains… ” 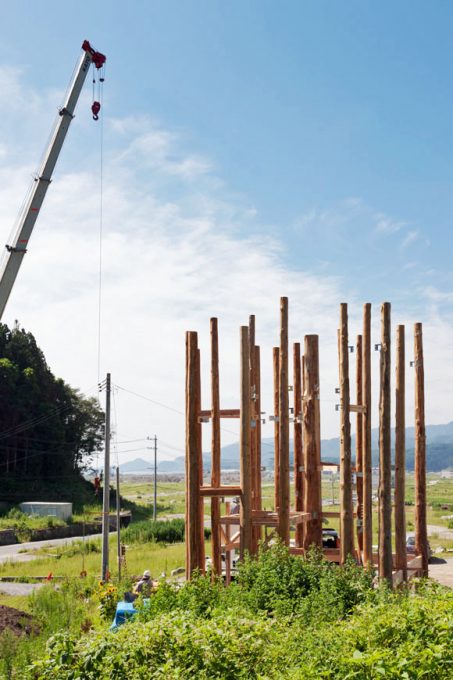 Following the discovery of the symbolic place to start rebuilding the team gradually developed common goals. On the one hand, a vertical structure was intended as a fire tower overlooking the entire city of Rikuzentakata. Moreover, the building resembled a grove, using Japanese cedar damaged by the tsunami and soaked in salt water. Even outside of Rikuzentakata, many Japanese cedar trees or pine were found at the foot of the mountain which was destroyed by the tsunami. These logs despite their abuse are perfectly safe for use as building material. Part of the idea was inspired by a comment by Mr. Hatakeyama, a photographer who accompanied the team of architects in the projections and throughout the construction process, who commented that the design model somehow remind the locals of the floats carried Rikuzentakata Kenka for the festival Tanabata (Star) from 07 July. Finally Rikuzentakata residents presented a draft “Home-for-All” consisting of several individual spaces arranged in levels.

For the Home for All project from the outset various schemes to follow, guided by the eye of the architect and the opinion of residents they were raised. First six different schemes, each with a distinctive design including Riken Yamamoto and completed SANAA. One of the projects completed in the first stage is developed by Toyo Ito in collaboration with one of his young charges, Maki Onishi, “Children’s Home for All”

Toyo Ito, Kumiko Inui, Sou Fujimoto and Akihisa Hirata worked together to explore possible future types of Japanese coastal cities that may be prone to earthquake similar to the 2011 event.

The vertical structure was built with 19 cedar logs stripped of its bark. These were selected from trees uprooted by the tsunami in a nature reserve, the Takata- Matsubara forest. Type construction reaches a height of 9.75my offers an area of ​​29.96 m², distributed on several levels surrounded with wooden balconies.
Column system using a natural wood as pillars arranged in a regular grid, the volumes are suspended in a three dimensional matrix such as a typical home on stilts, with a ratio of both axes, horizontal and vertical, of different layers of housing, functional levels, in some cases maintaining the orthogonal nature of the bases, in other exercising exception. “Home for All” serves as a meeting place for thousands of people left homeless by the devastating natural disaster.