This project, also called the Gembaku Dome or the Dome of the Atomic Bomb, was won in competition by Kenzo Tange in 1949 and somehow made him famous in the international arena. In 1996 he was declared world heritage by UNESCO.

The original building was designed by Czech architect Jan Letzel and worked as a Commercial Exhibition Center of Hiroshima Prefecture until the August 6, 1945, the fateful nuclear explosion epicenter was just 150 meters from the building and became so close the only structure that remained standing, despite the great damage, to such an attack.

Respecting what is left standing of the original building and a few meters from it, Tange rose in an area of 122,100 square meters a tribute to the victims of the tragedy.

Located in the heart of the city of Hiroshima, at the junction of the rivers Motoyasu and Honkawa, Japan, the Peace Park to symbolically aligns atomic dome.

The park is a tribute to the victims of the tragedy and recalls all its corners with either evocative monuments or three modernist buildings that Kenzo Tange was raised in, and remember that the ravages of humanity caused by the atomic bomb and calling for the urgent need for nuclear weapons are not used anymore.

The main building erected in the middle of the park with his imposing bearing and modernist houses the museum.

The main building is flanked by two smaller buildings, a library and the other the Conference Center. In 1995 the three buildings were connected by a bridge.

The esplanade in front of the museum can accommodate over 50 thousand spectators for the annual commemoration traditional. From the square to display the set and the two main buildings, thereby achieving the objective sought by the architect.

The Center’s purpose is reinforced by several monuments of reinforced concrete, like the one erected in honor of Sadako Sasaki, a girl victim of atomic radiation in the form of a hyperbolic parabola. This monument is known as the Peace Bell.

Another monument to honor those killed in Hiroshima by the bomb, like a saddle, with its parabolic shape, but with Kenzo Tange incorporates elements of Japanese tradition, since that form is in memory of Haniwa, tombs former leaders of Japan.

Behind this there is a small artificial lake on the other monument that rests with a candle in memory of the fallen.

In 1994 Tange features a new building inside the Park, the Hiroshima Peace Center Memorial Hall, whose interior is exposed to the public images of the disaster after the explosion.

Of semi-circular, you reach your center, a cylindrical space, via a helical ramp. In the middle of this space is a source of water on it and a glass skylight, both agree on the form, a clock whose time is fixed, 8.15, hour of the grim event.

The original building is preserved as it was after the atomic explosion and the whole park was created around it.

This complex of buildings to show the simplicity that can be reached on a design. With its main dining room of flat and long resting on concrete pillars removed, in a concrete structure slender, thin, finely finished that allows the color of cement and allows you to see the transparency of the interior, it is impossible not to mention again Le Corbusier, even when shown a strong influence of traditional Japanese design in the grid of windows and layout of the structure.

The glass facade is divided by nerves cement horizontal and vertical layers, highlighting the dominance of vertical and horizontal characteristics of the construction of Tange.

The construction of buildings and monuments was completed primarily in reinforced concrete exposed and the main facade of the museum covered by glass.

The Hiroshima Peace Center Memorial Hall, was constructed with 140 thousand bricks, the number of victims until the end of 1945. 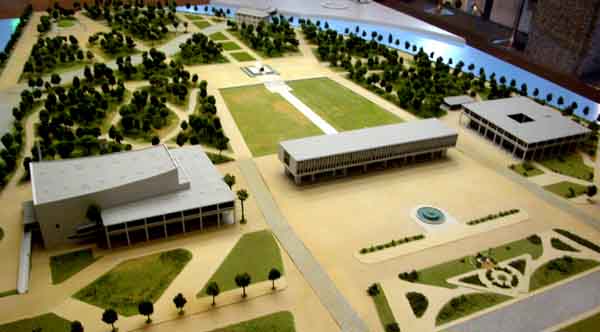 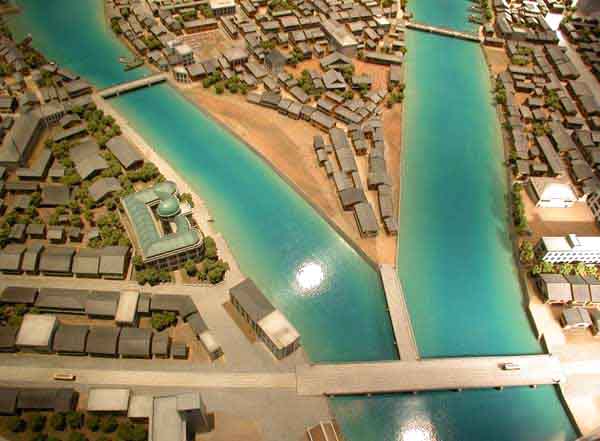 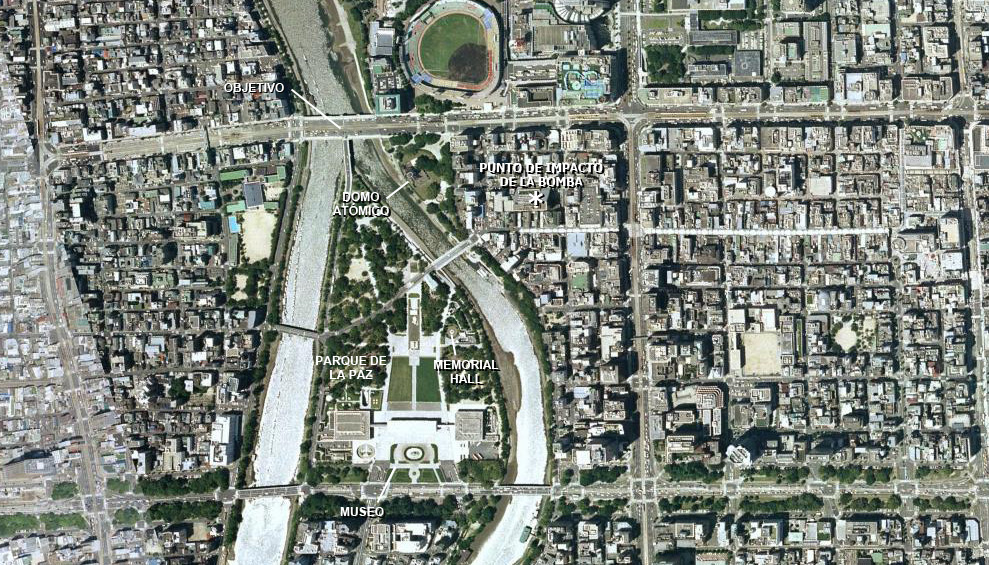 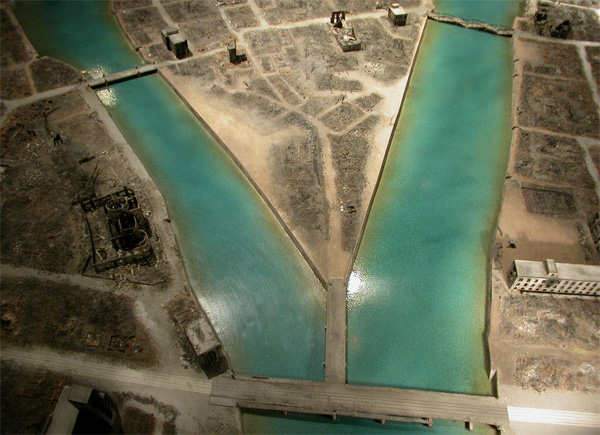 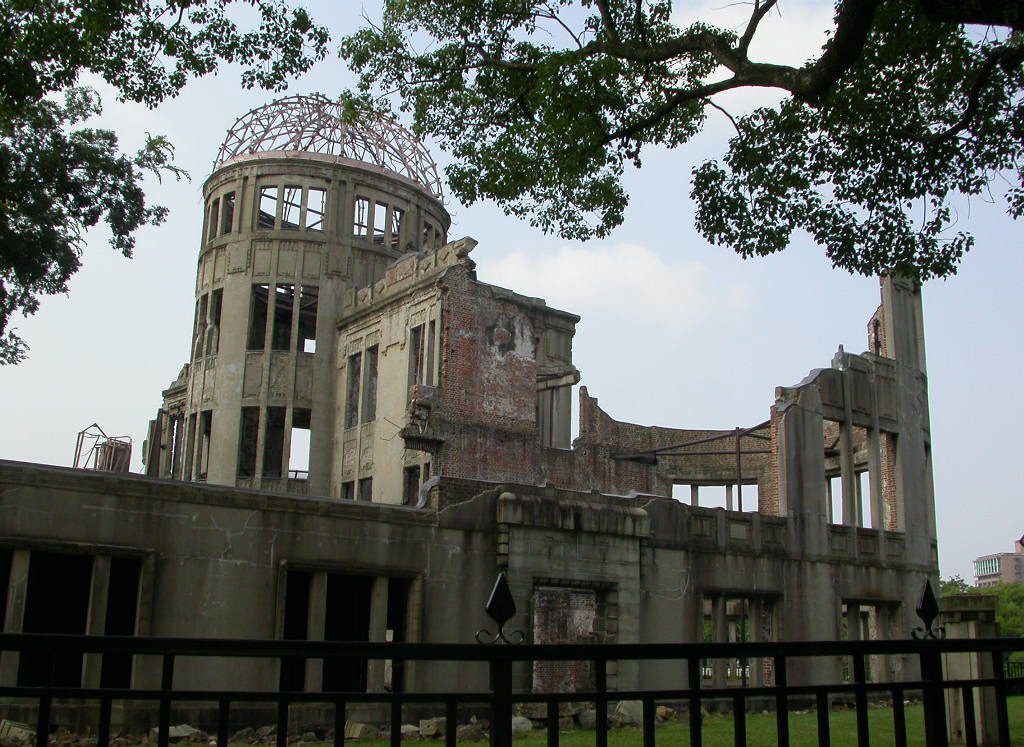 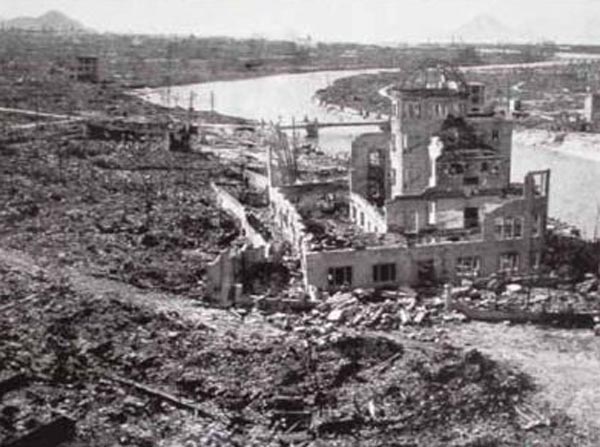 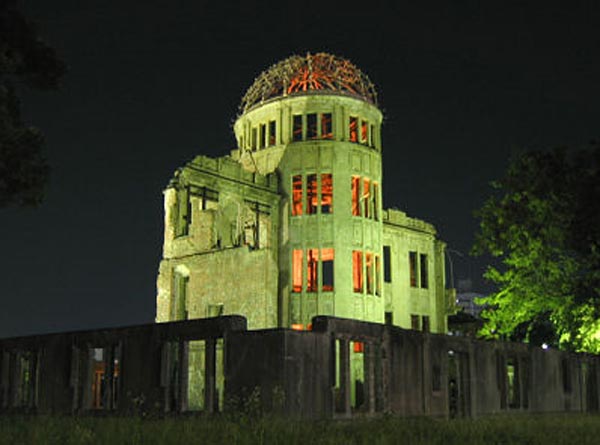 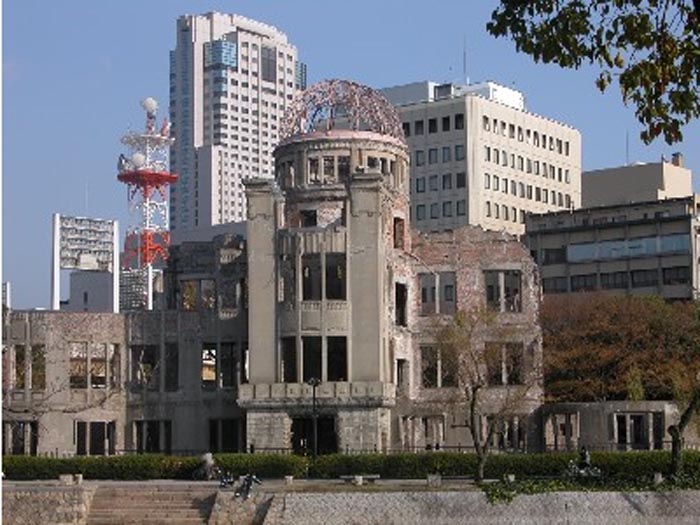 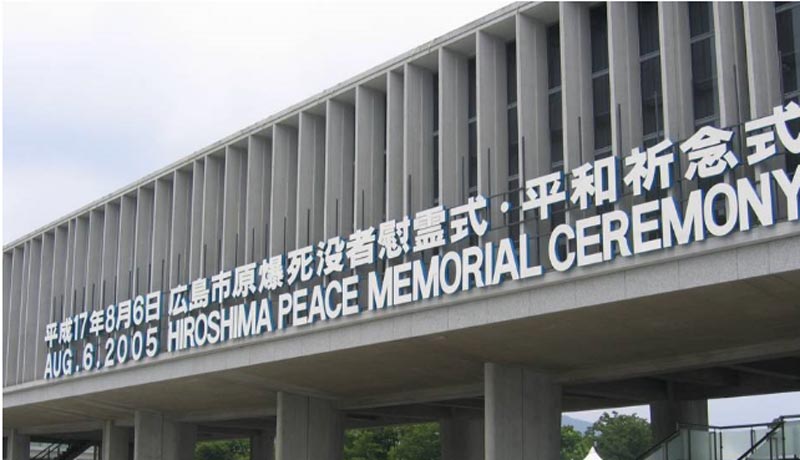 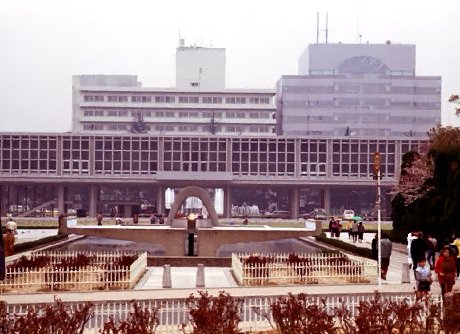 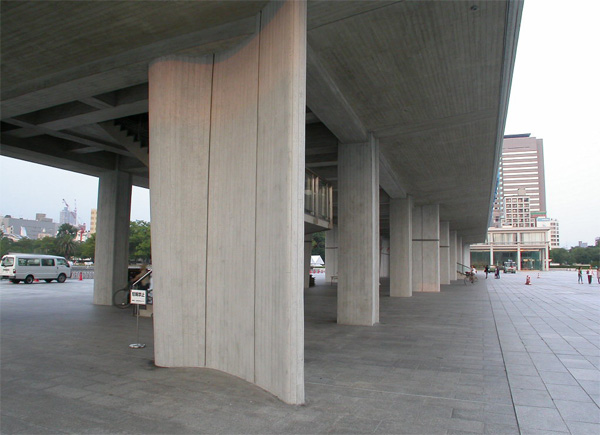 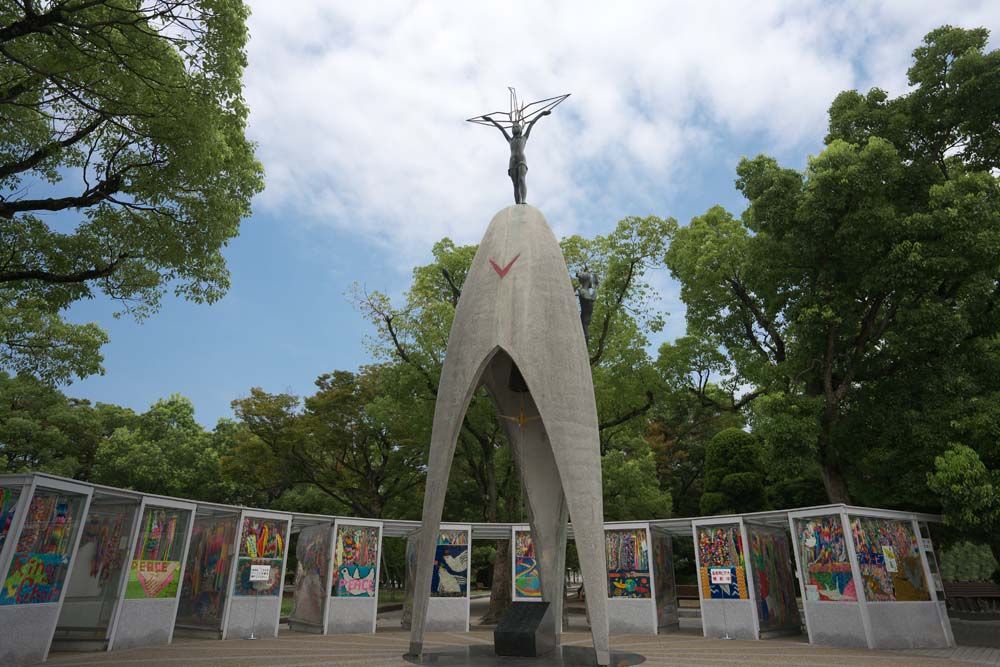 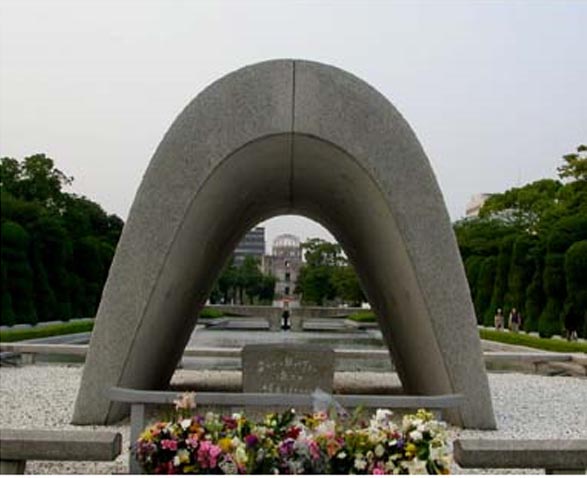 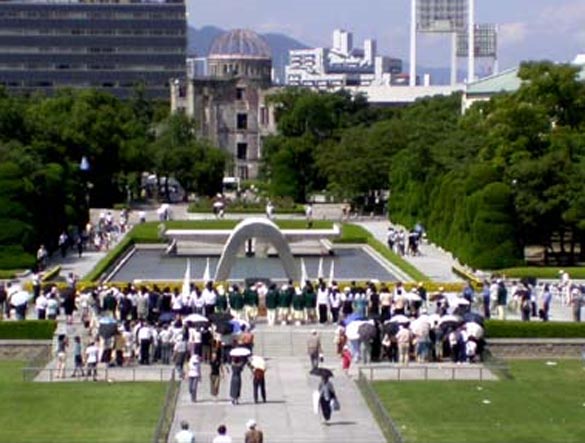 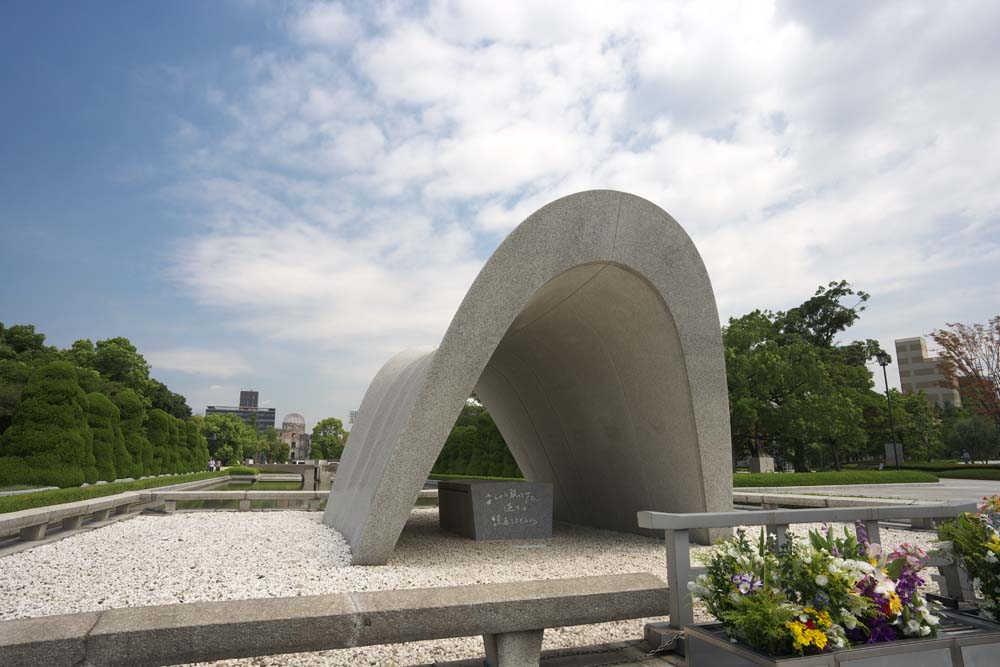 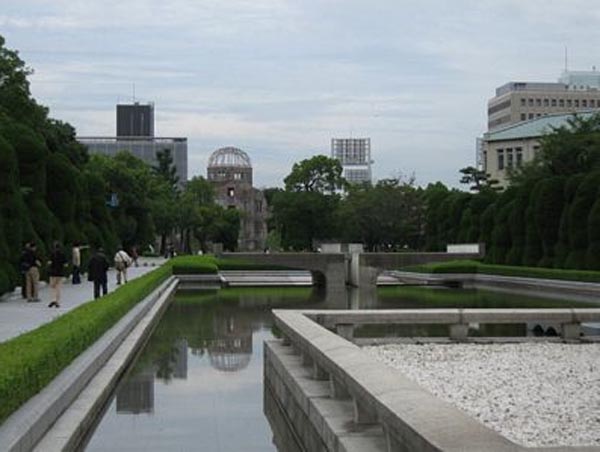 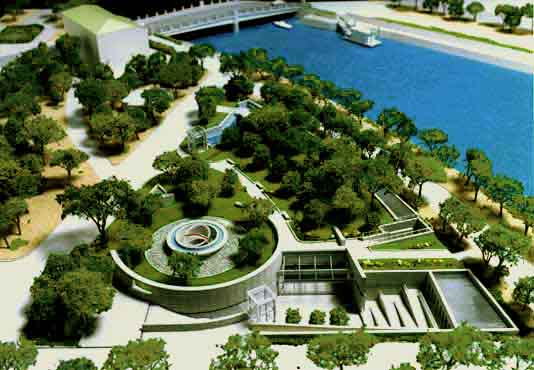 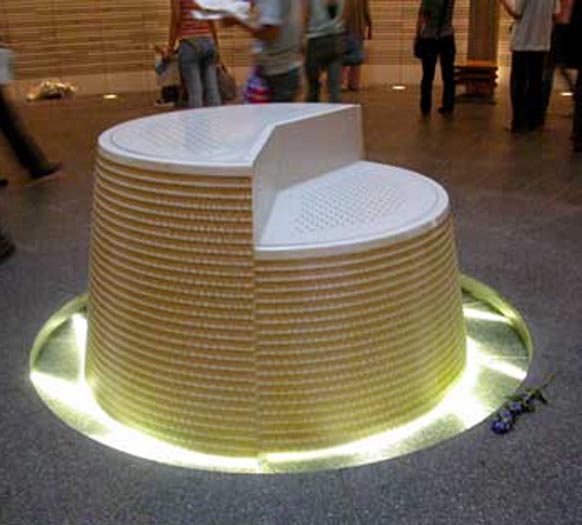 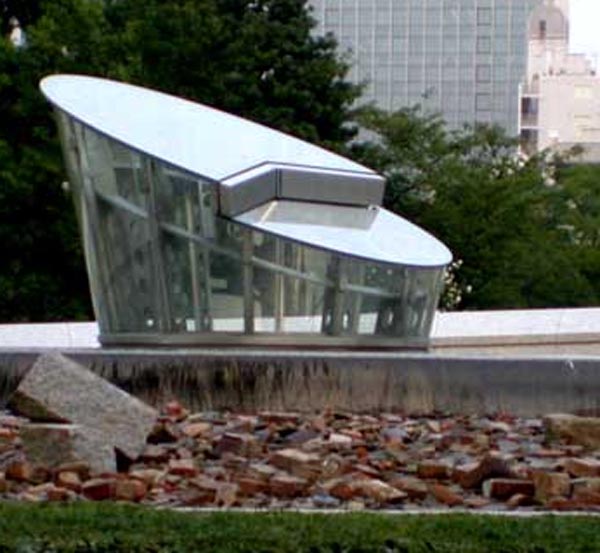