The Heydar Aliyev Centre, constructed over 57,519m², is a complex of buildings designed by the Iraqi-British architect, Zaha Hadid, which stands out for its architecture and fluid, curved style which avoids sharp angles. The centre bears the name of Heydar Aliyev, leader of Azerbaijan during the Soviet era of 1969-1982 and president of the country between October 1993 and October 2003.

The Heydar Aliyev Centre, an internationally recognised architectural work, has become a point of reference for modern Bakú, due to its innovative and avant-garde design. The building was nominated for the World Architecture Festival prize and the bi-annual Inside Festival in 2013.

Situated close to the centre of the city, the site has a fundamental role in the re-urbanisation of Bakú, Republic of Azerbaijan, on the Western coast of the Caspian Sea. To travel to the centre, a new metro line was built which drops visitors at the foot of the gentle hill on which the building sits.

The spaces which surround the Heydar Aliyev Cultural Centre are approved for residential use, offices, a hotel and a shopping centre, while the land between the cultural centre and the main arterial road into the city has been converted into a Cultural Plaza, an outdoor space for public use. 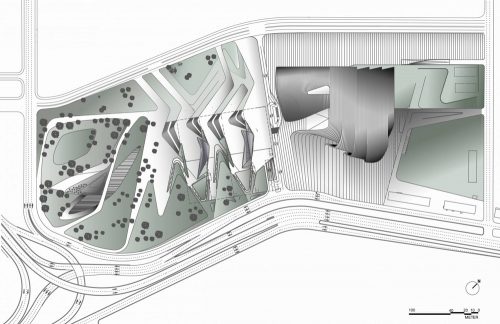 Hadid’s structure stands alongside the various others within the complex. With a continuous design of auto-transformation in all directions, there is little sense of limits and no indication of an end. It is an immersion in a pool of space. The immateriality of a building which varies between white, more white and even whiter depending on the position of the sun on its surfaces, lends it a weightless character, liberating its visitors from gravitational obligations. As an object, the building is subjective, provoking strong reactions, unrestricted by the suspension of physical gravity.

With its light appearance, the Heydar Aliyev Cultural Centre gives the sense of being all form, with no structure, but its forms hide extreme engineering. A double-layered spatial structure which is very flexible is the principal support for the double curve that travels smoothly along the top and bottom of the outer shell, hiding the structural frame and highlighting the surface, rather than the structure, as if the building were all effect and no cause.

The Heydar Aliyev Cultural Centre represents a fluid form which emerges from the folding of the natural landscape of the countryside and from the wrapping of the individual functions of the interior. All the functions, together with the inputs, are represented as folds in a single, continuous exterior surface. This fluid form provides the opportunity to connect the diverse cultural spaces and, at the same time, proportion to each element of the Centre its own identity and privacy. Following the interior folds, the skin wears away to convert into more of an element of the interior environment. According to its principal contractor, DIA Holding, the forms of the 57,519m² Cultural Centre give the impression of the lightness of a handkerchief waving in free-fall.

The centre was designed with the intention of it becoming the main venue for national cultural events, breaking away from the rigid and often monumental Soviet architecture so prevalent in Bakú, and aiming to express the sensitivity of Azeri culture and the optimism of a nation looking toward the future. 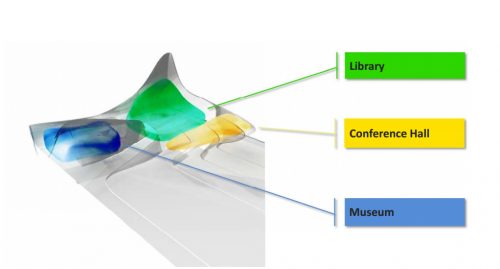 As explained by Zaha Hadid in a conference, the Bakú complex actually consists of three buildings: a conference centre, a museum and a library, connected by an interior space and by the curved and “fluid” exterior skin which snakes across the whole structure.

The project, which is destined to play an integral role in the intellectual life of the city, houses a conference centre with auditorium and meeting rooms, a library, a museum, a restaurant and parking.

Leaving the metro line specifically constructed to reach the Cultural Centre, visitors arrive at the building by crossing a long and steep park, using a zig-zag path. It leads them to a square paved with square slabs of white concrete, as if the outer shell of the centre had been extended across the ground or the curve of the building begins from it. This area, called the Cultural Plaza, which leads to the main arterial road into the city, is intended as an outdoor space for the Cultural Centre and a welcoming space for visitors.

As a solution to the sheer drop which previously divided the land in two topographically, the project comprises a landscape of terraces which establish alternative connections and routes between the public square, the construction and the underground metro station. This solution negated any requirement for extra excavation or filling and successfully converts an initial disadvantage of the site into a key design feature.

The design of the Heydar Aliyev Cultural Centre establishes a continuous and fluid relationship between the surrounding square and the inside of the building. The Plaza, accessible to the public as part of the urban fabric of Bakú, surrounds an equally public interior space and defines a sequence of events spaces, dedicated to the collective celebration of Azeri culture, both contemporary and traditional. Zaha Hadid, along with her partner, Patrik Schumacher and the project’s architect, Saffet Kaya Bekiroglu, have extrapolated the fluidity of the forms of the centre to the surroundings, creating a series of interlaced terraces with mirrors of water, waterfalls, undulations, bifurcations, folds and bends which convert the surface of the Plaza into an architectural landscape which achieves a multitude of functions, welcoming and directing visitors to the different levels within the interior. With this gesture, the building blurs the conventional lines between architectural object and urban landscape, encompassing the building and the urban square, the outline and core, inside and out. A cut-out in the exterior casing of the building leads to the glass doors which open to a passageway of whiteness. 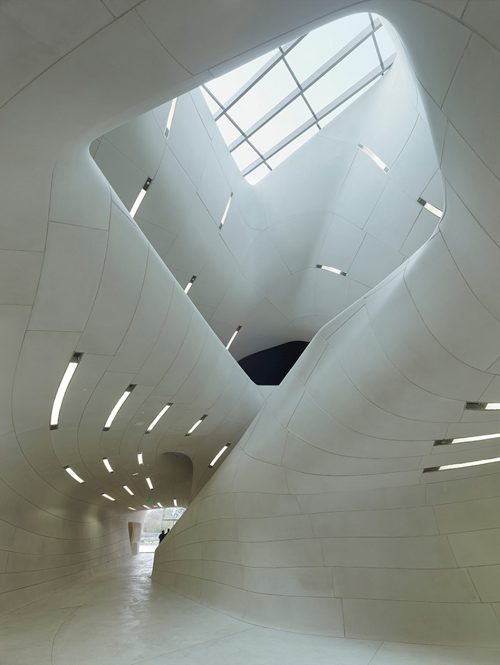 The interior of the centre is characterised by continuous surfaces which twist to transform the walls into ceilings and slopes. The shapes recall the shell of the TWA terminal in JFK airport, about which the architect, Eero Saarinen, said “everything is only one thing”.

The ground floor comprises various lobby spaces intended to create public spaces which unite the different aspects of the centre’s programme. From these reception rooms, the theme of fusion continues throughout the interior of the building, with continuous, flowing surfaces.

The floors transform into ramps and walls, rotating on soffits and ceilings, to later continue twisting and advancing out of sight, forming endless white landscapes.

The library is orientated North, to take advantage of the natural light, and has its own entrance. The levels dedicated to reading and archives are stacked one on top of each other, wrapped in the building’s outer layers of skin. The floors are descended via connecting ramps and create a continuous path of circulation. The library and museum are also connected by a ramp which travels across the ground floor of the library to the first floor of the museum. The library is also connected to the Conference Hall by a bridge which “flies” over the entrance hall. Its form reaches down to the Culture Plaza, supported to create the necessary inclination, and leading to the seats of the outdoor space.

The auditorium and its associated facilities have direct access to the Plaza. The main entrance is found in the space carved out of exterior layer, “stretching” between the volume of the museum and the tower of the library. The secondary entrance is found on the North side of the building. 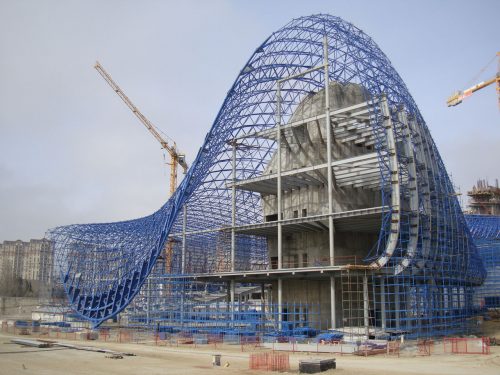 The building is principally comprised of two systems which work together: a concrete structure combined with a spatial structure system. With the intention of creating large-scale, free spaces of columns which allow the visitor to experiment with the fluidity of the interior, vertical structural elements are absorbed by the walls and curtain wall system. The specific geometry of the surfaces encourages unconventional structural solutions, such as the introduction of curved “starter columns” to achieve the inverse shell of the surface from the floor to the West of the building, and the “duck tail” resulting from the narrowing of the cantilevered beams which support the skin of the building on the East side.
The spatial framework system allows the construction a free-form structure and was also designed to save time throughout the construction process, while the substructure was developed to incorporate a flexible relationship between the rigid grid-work of the spatial structure and the seams of the free-form exterior cladding. These seams are obtained through a process of rationalisation of the geometric complex, the use and the aesthetics of the project. Fibreglass reinforced with concrete or polyester were chosen as the ideal cladding materials, as they allow for the powerful plasticity of the building’s design, while responding to a diverse range of related functional requirements: the Plaza, transition zones and the building’s wrapping.

The building, whose smooth, distorted grid-work of polyester-reinforced fibreglass panels do not have visible connections, appears less “as built” and more “as landed”.

In the construction, they used 121,000m³ of reinforced concrete, 194,000 formworks and 19,000 tonnes of steel molds. To create the shape of the external skin, 5,500 tonnes of structural steel were required, creating the base for a surface of 40,000m² formed of panels of fibreglass reinforced with polyester or concrete. There were a total of around 17,000 individual panels with various geometries.

To emphasise the continuous relationship between the exterior and interior of the building, the illumination of the Heydar Aliyev Cultural Centre was carefully considered. During the day, the building reflects the light, constantly altering its appearance according to the time and the perspective. The use of semi-reflective windows allows the interior to be perceived without revealing the trajectory of the spaces. By night, the building is gradually transformed by the illumination which flows from the interior, which develops the formal composition to reveal its contents and maintain the fluidity between the interior and exterior.