The Helsinki Central Train Station, classified as Art Nouveau, contains many features that would later define the Modernist Art Deco approach applied in particular to US stations such as Cincinnati, Buffalo, Newark and Los Angeles.

The new station designed by Eliel Saarinen, father of Eero  Saarinen, replaced the previous station built in 1862, a project of the Swedish architect Carl Albert Edelfelt, being small to cope with the increase in passenger traffic. In 1904 a contest was organized for a new station. The contest received 21 entries, and was won by Saarinen, with a pure national romantic design, which sparked a vigorous debate about the architecture of the main public buildings, with demands for a modern and rational style. Saarinen himself abandoned romanticism completely and redesigned the station. The project began to be built in 1909 and it took 5 years to complete the building and another 5 to officially open, a ceremony delayed as a result of the First World War.

Helsinki Central Station is a widely recognized landmark in the center of Helsinki, Finland, and the focal point of public transport in the metropolitan area of the city.

The station serves as a central point for Finnish transport. There is a bus station on both sides of the building and the Rautatientori Metro is located under the main building, linked through the Asematunneli pedestrian underpass and the underground shopping complex, which has entrances in the main hall of the station and at various points of The streets of the city center. Most of the Helsinki tram routes pass in front or west of the station.

Architecture critic J.Glancey describes Eliel Saarinen as “a bridge between the architectural concerns of the 19th and 20th centuries”, and that bridge is exemplified by Central Helsinki. Its shape is very similar to that of an Art Deco / Modernista rail terminal, but while Modernism eliminates surface details, Helsinki Central is finished in pink granite sculpted with detailed patterns.

Considered one of the most beautiful railway stations in Europe, its three main facades are lined with Finnish granite. The three-story office building with plaster facades flanks the main hall. The station has 19 platforms, but only the central platforms reach the central hall. On the sides are suburban lines.

The main entrance, which has a large half-point window with glass above the canopy, is flanked by two large figures on each side that hold lamps in their hands. There are arch patterns, jagged patterns and floral patterns that surround the window in an Art Nouveau style influenced by the Vienna Secessionists instead of the more organic French Art Nouveau. Another nod to Art Nouveau is that the copper roof has a segmented finish at the ends of the gable.

The lower halves of the statues are abstract, they have no legs but half a column. The columns are sculpted with patterns similar to those surrounding the large window. The upper parts of the statues are largely naturalistic, except for their hair, which have an Art Deco finish. This entrance leads to a large room with a cannon ceiling.

Some of the external doors that are not for passenger use are also flanked by small lamp-carrying statuettes and on the west side of the station another secondary entrance has an arched window similar to that of the main one, above the doors , but this time it is flanked by two curved towers instead of statues.

Although it appeared in the original designs of Eliel Saarinen, it was not until 2000 that a glass roof was placed on the central platforms, with a new design. In 1994 Esa Piiroinen won the architecture competition held to cover this area of ​​the platform. The glass roof with steel structure was completed in 2001.

Outside the station, the cargo area of ​​trains carrying cars is on the west side.

The groups of narrow vertical windows located on the facades of the building are a characteristic of the Helsinki Station that would be repeated in later modernist stations and other types of buildings. But it is in the interior where the later modernist train stations bear more similarities with the work of Saarinen.

The vaulted ceilings are made of concrete, this was a novelty for large public buildings in the early twentieth century, including patterns sculpted on the pilasters and around the windows.

A large 50m2 room serves exclusively for the use of the President of Finland and his guests. His vintage furniture was designed by Saarinen himself. The hall completed in 1911 was originally planned for private use by the Tsar of Russia but the outbreak of World War I delayed its official inauguration until 1919.

The clock tower, on the east side, 48.5m high, shows the staggered upper part. The door, at the bottom of the tower, is topped with a small sculpture of the globe cradled inside a pair of winged train wheels.

Currently the station is kept in good condition, despite the numerous additions that have been made over the years, or the damage suffered during the bombings and even a fire. The large chandeliers continue to attract the attention of travelers, although they are a replacement for the originals, with another more ornate design.

The outdoor station is lined mainly with Finnish granite in a pink tone and its distinctive features are its clock tower and the two pairs of statues that hold the spherical lamps, illuminated at night, on each side of the main entrance. The interior vaults were made using reinforced concrete.

A hallmark of the building is the clock tower, crowned with a copper roof. Copper work is a collection of simple geometric shapes that includes several series of stepped rectangles and dome-shaped pineapple shapes. On each watch face there is a decoration reminiscent of the winged motifs of Ancient Egypt that became popular among later architects, especially after the discovery in 1922 of the tomb of Tukanhamen. 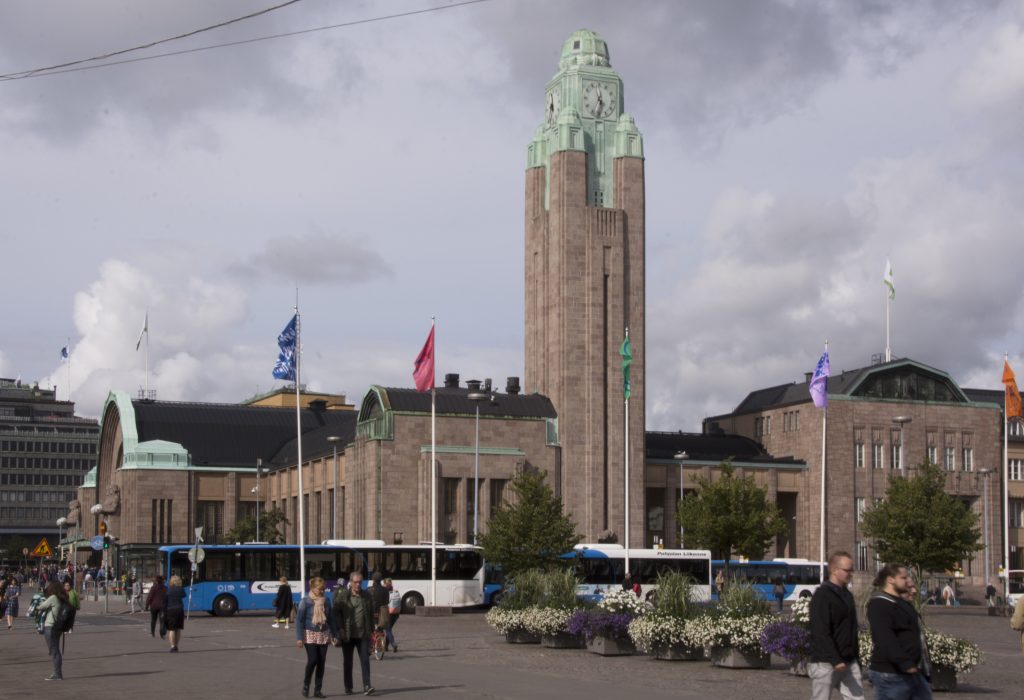 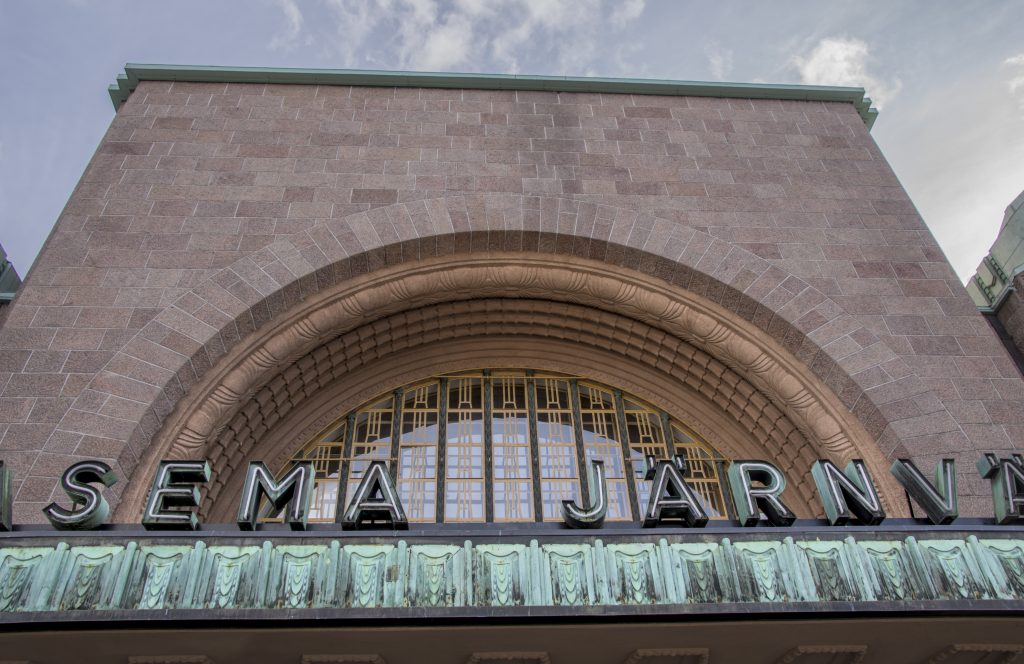 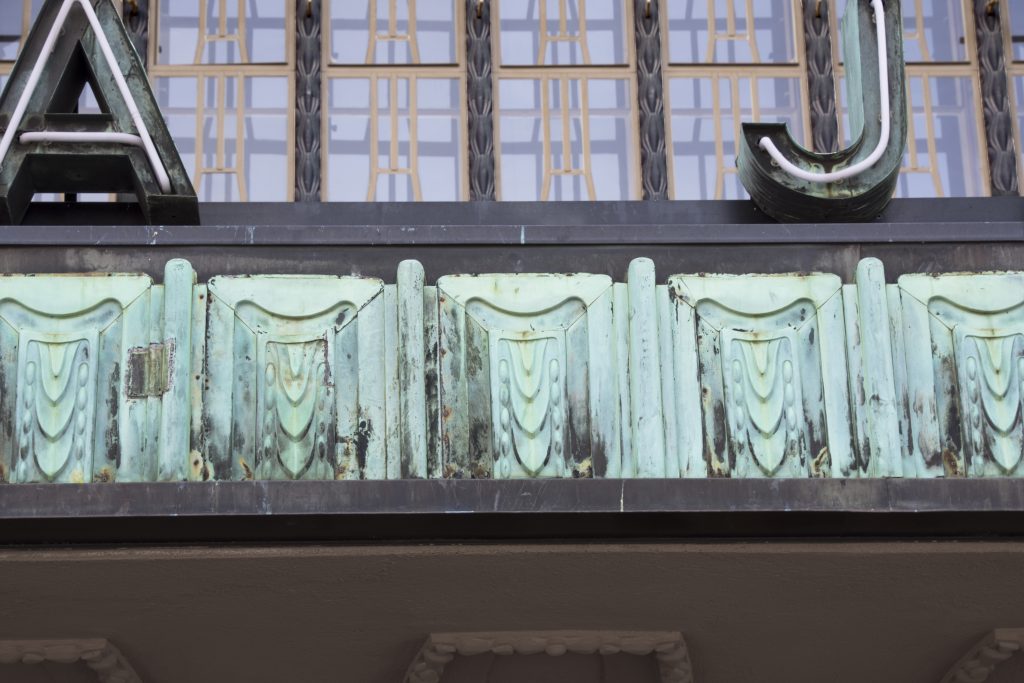 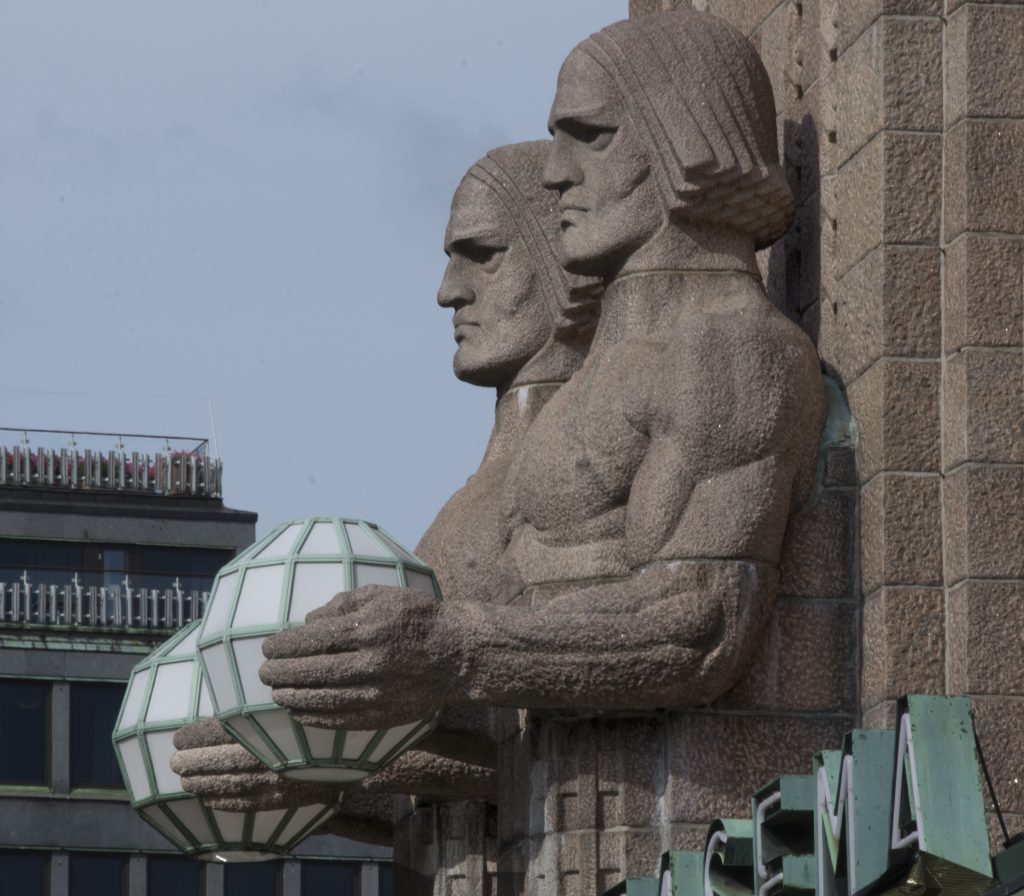 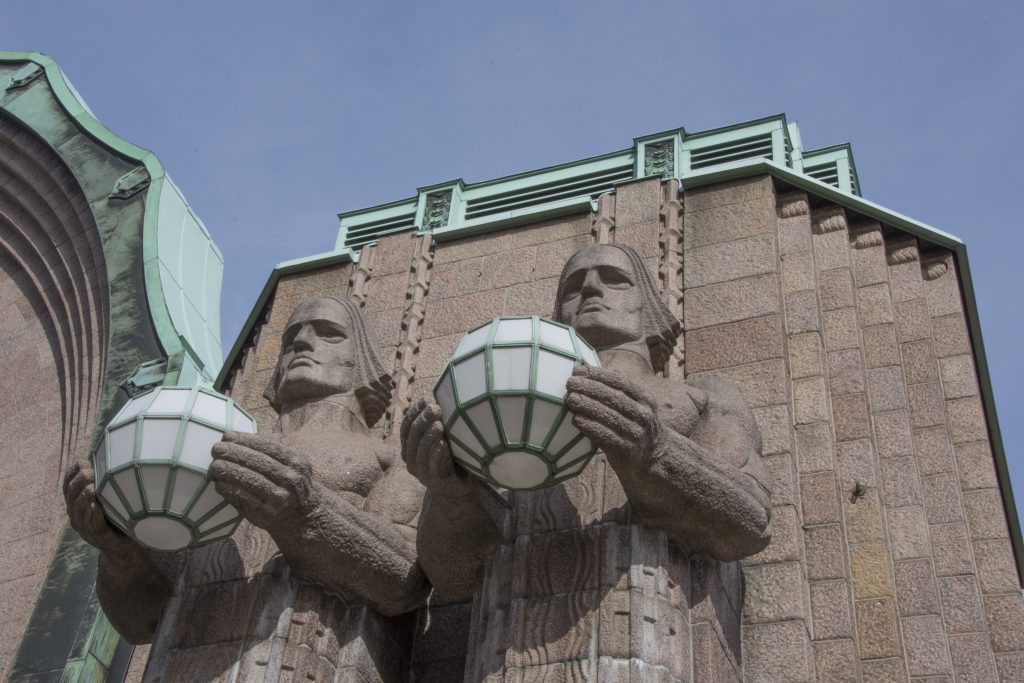 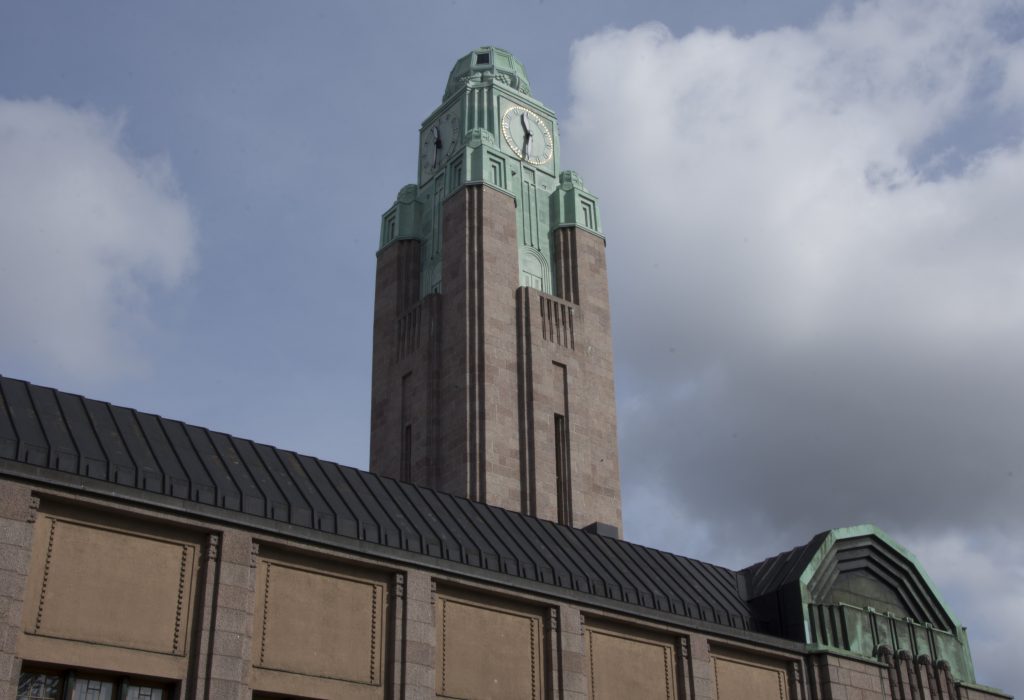 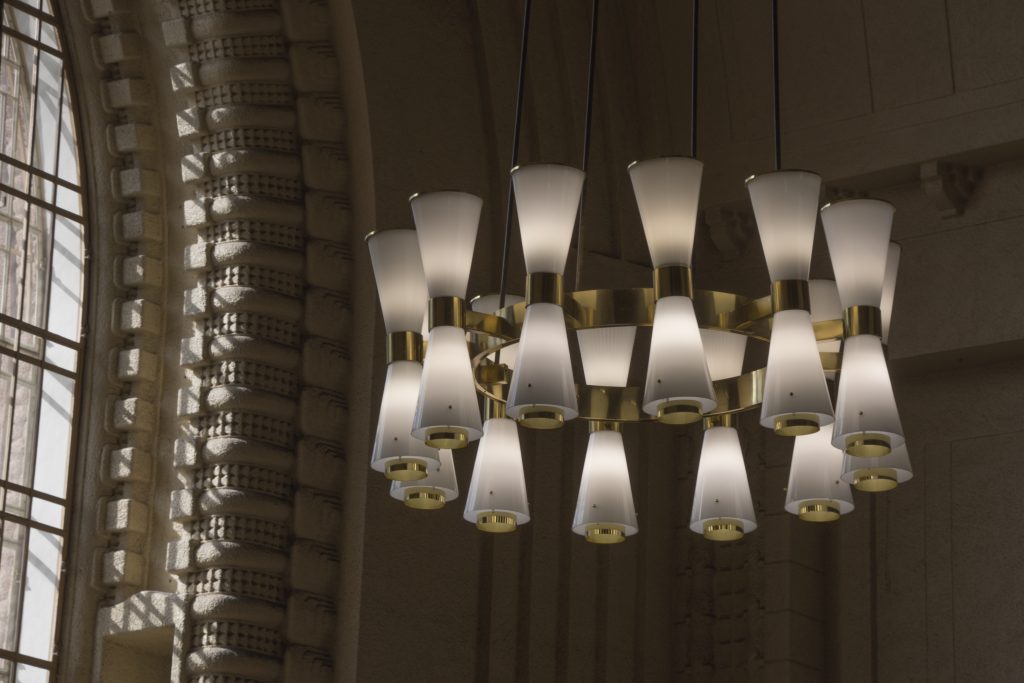 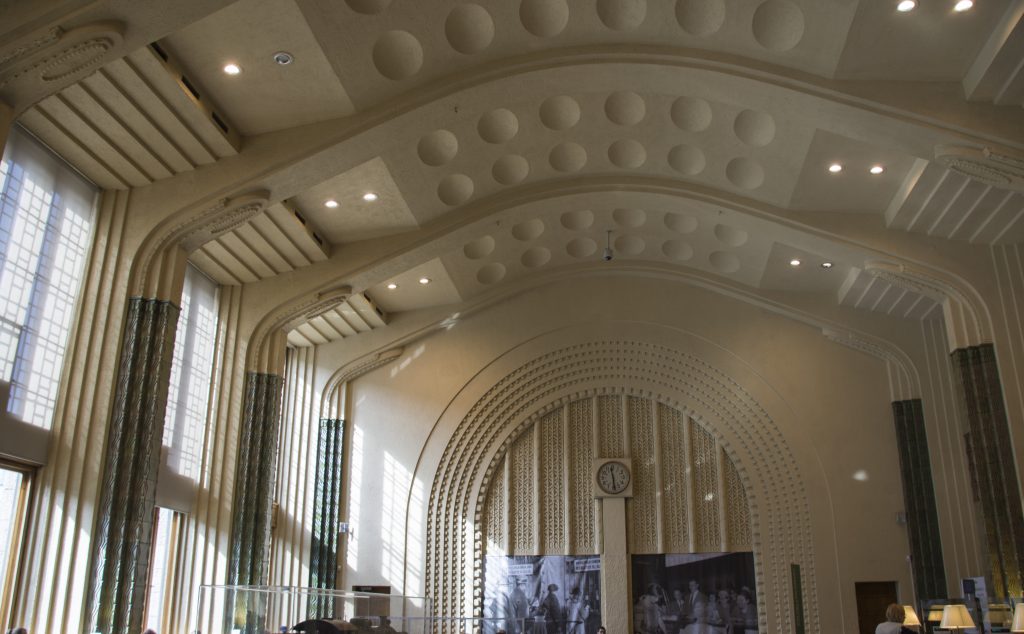 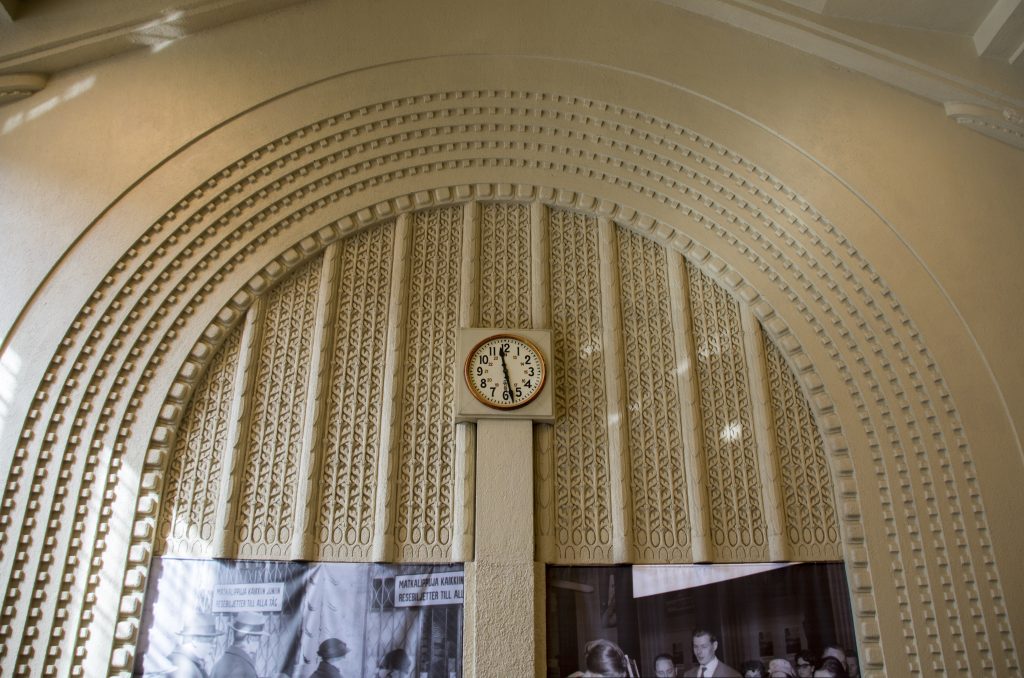 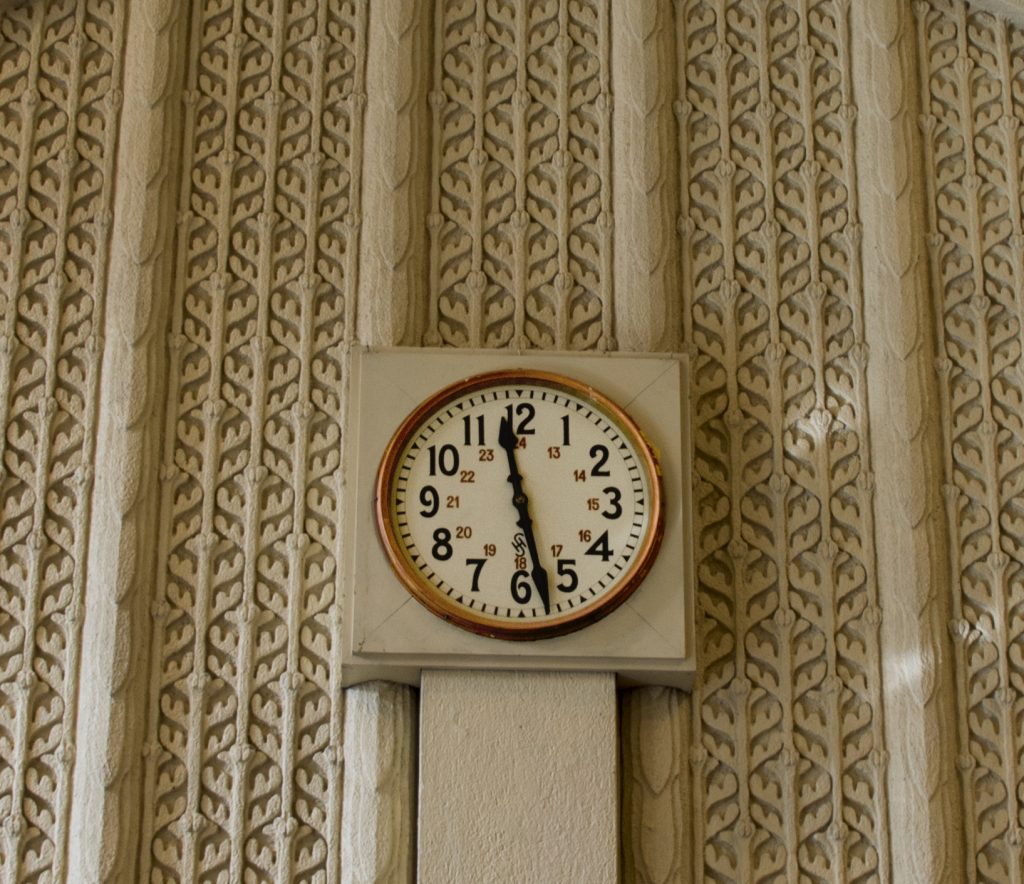 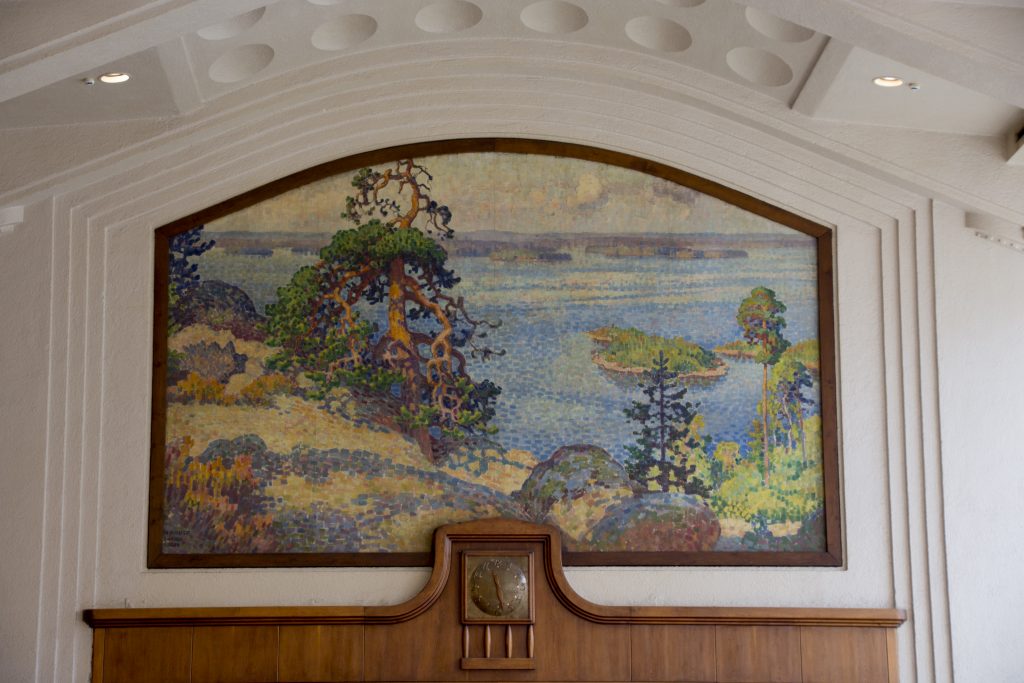 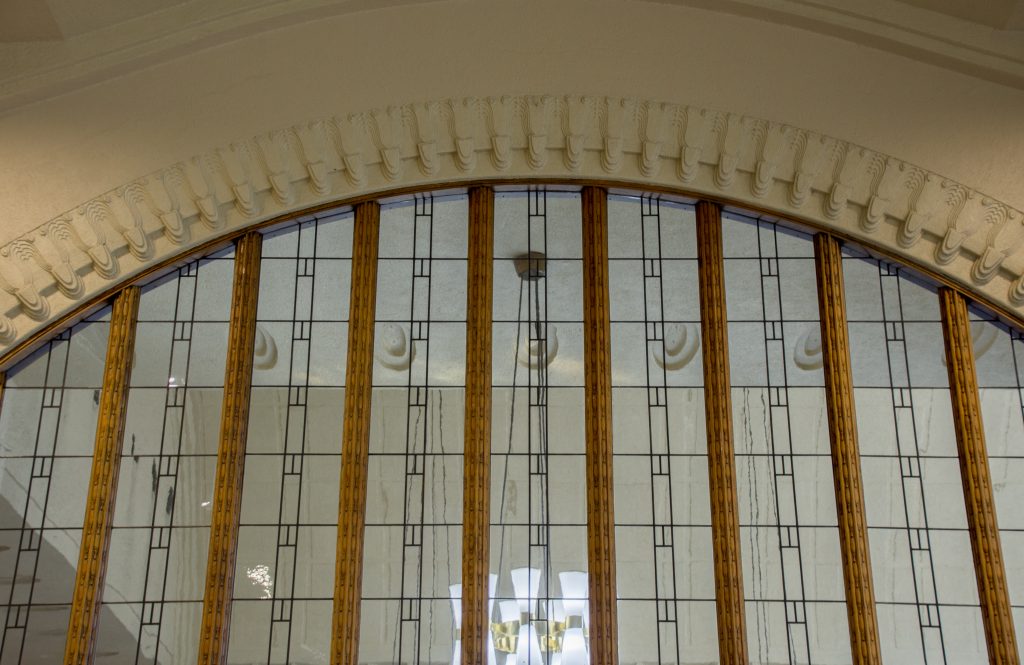 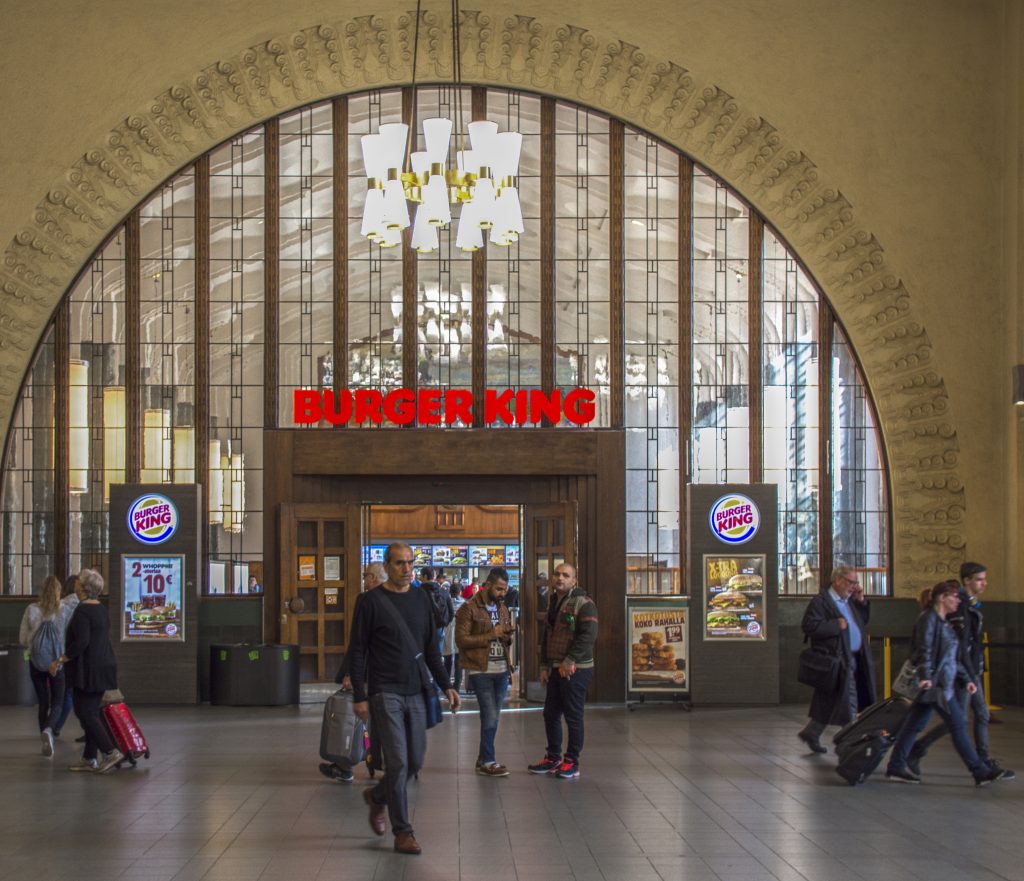 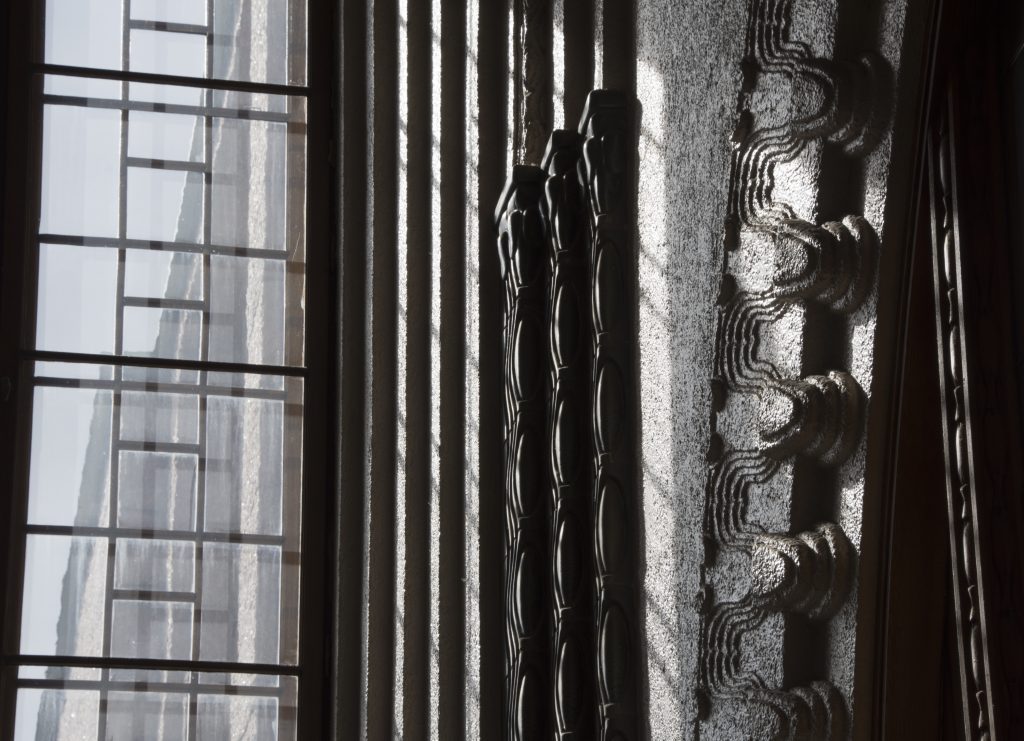 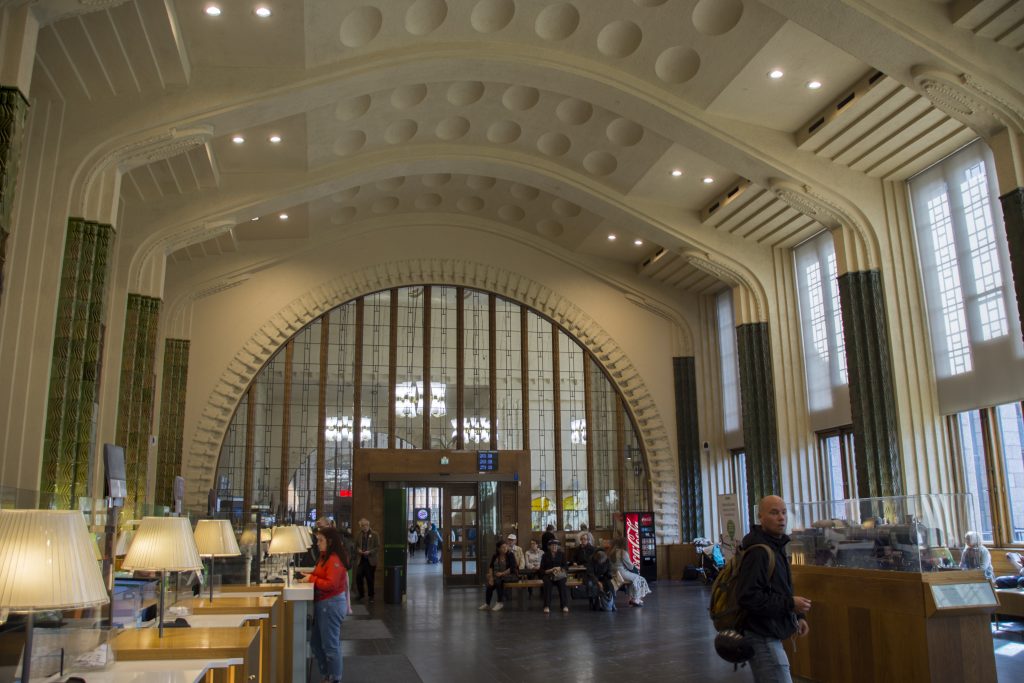 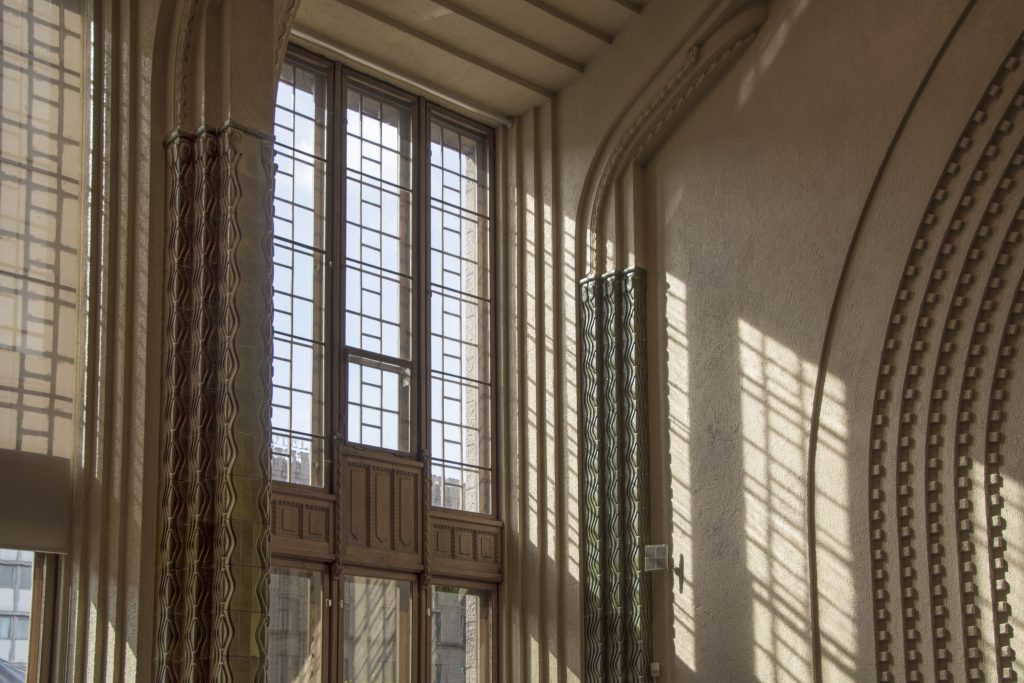 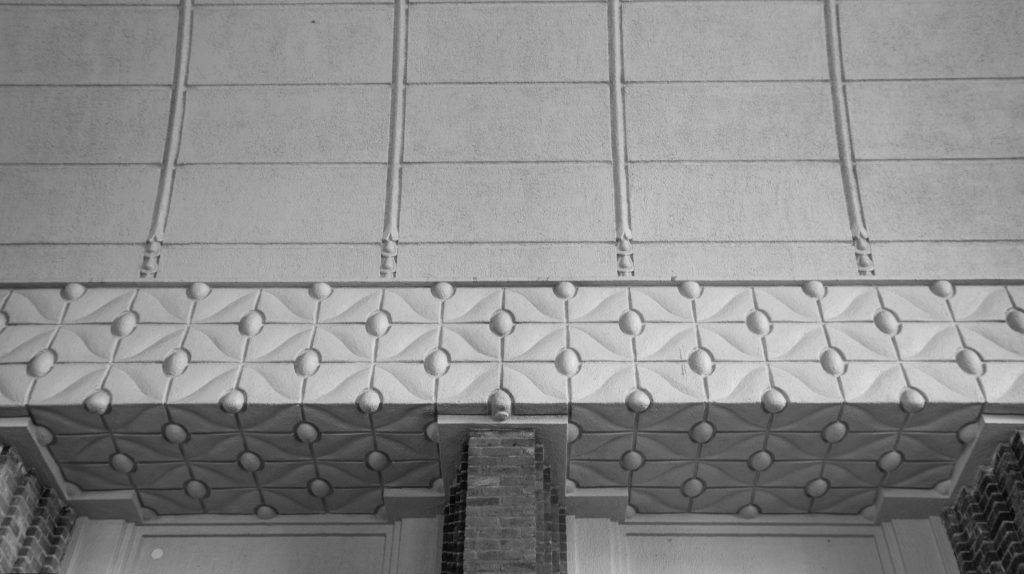 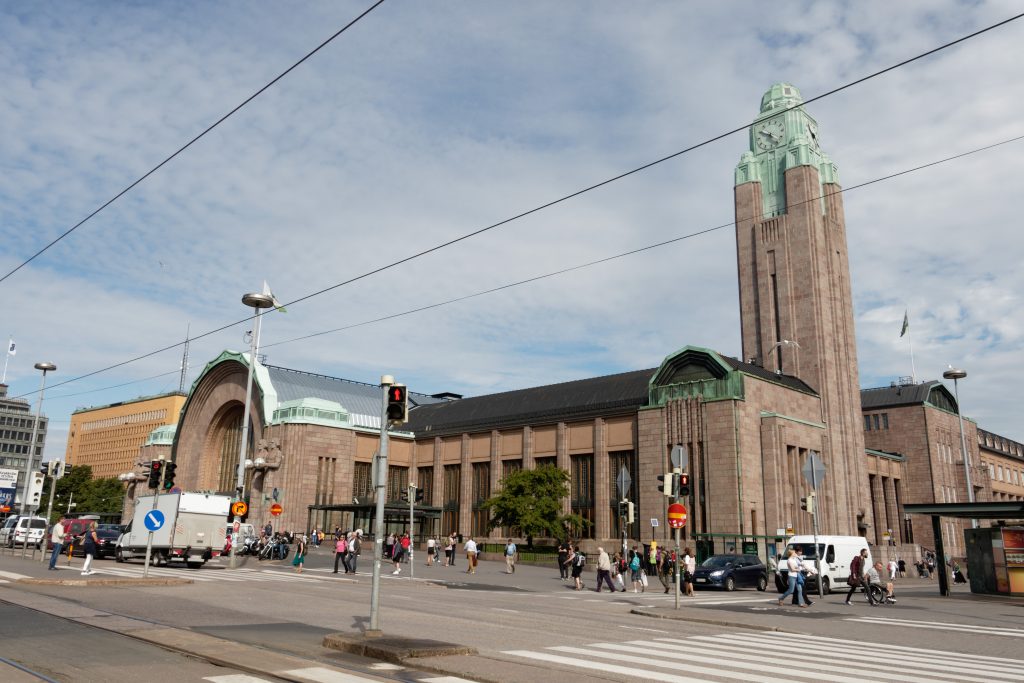 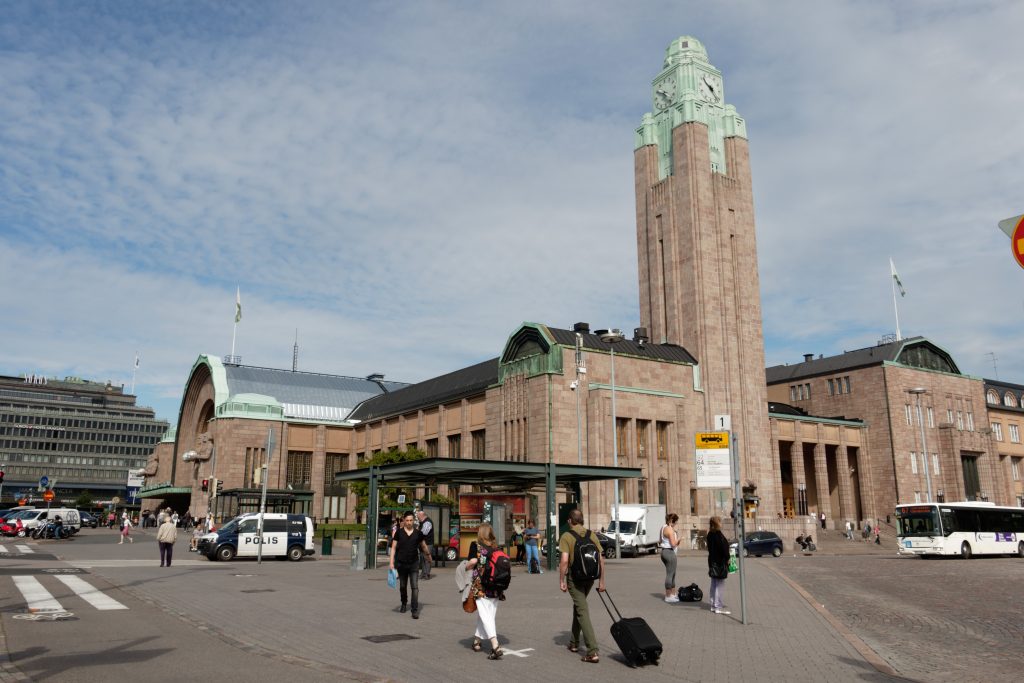 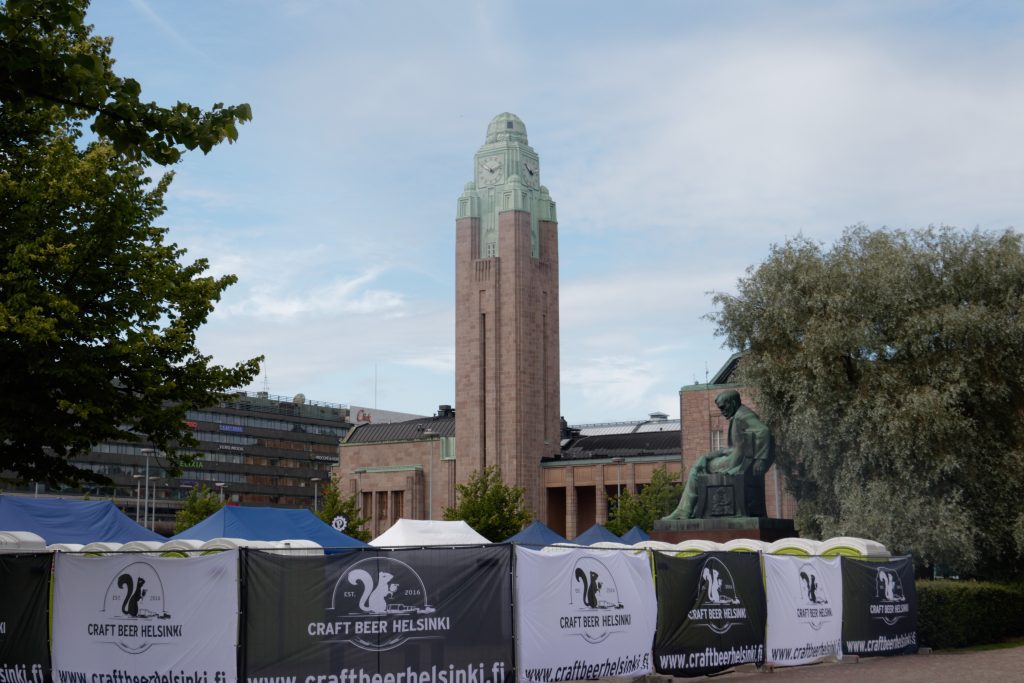 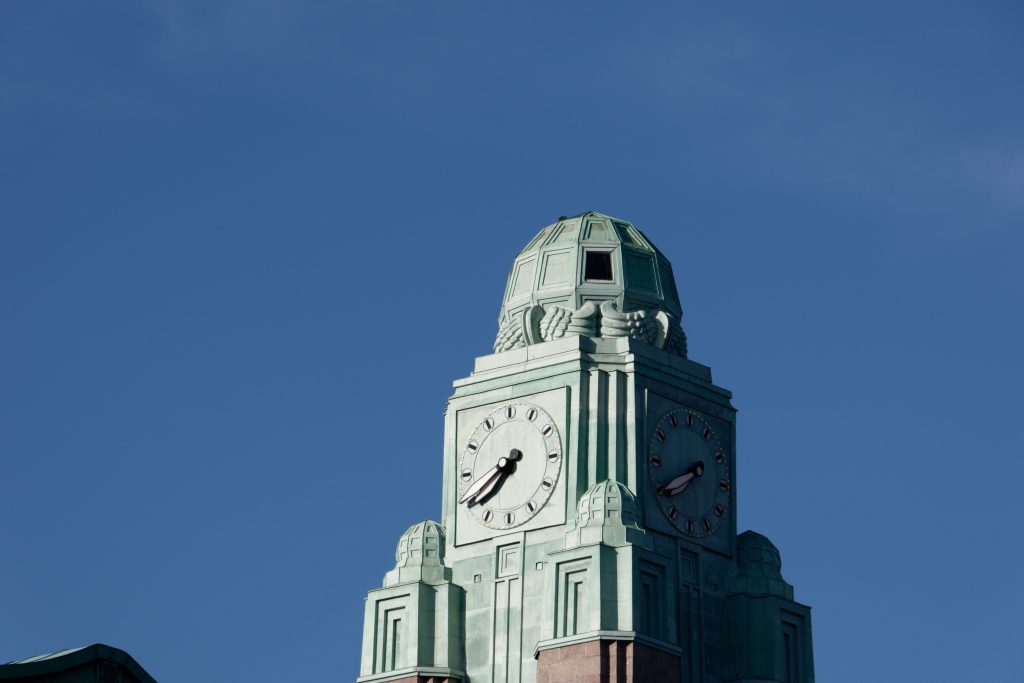 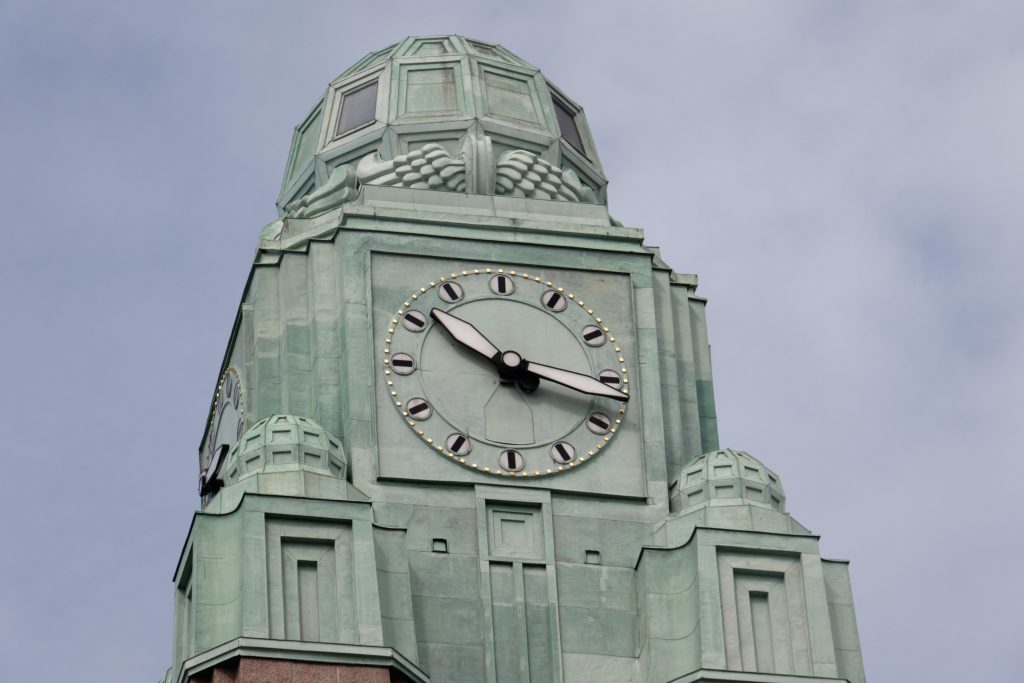 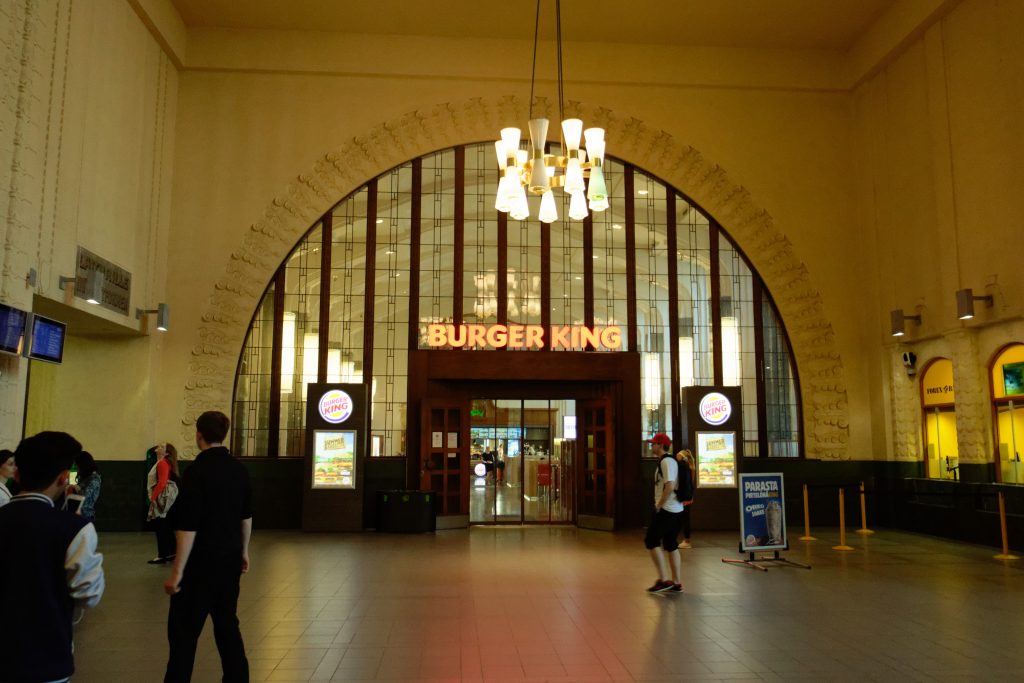 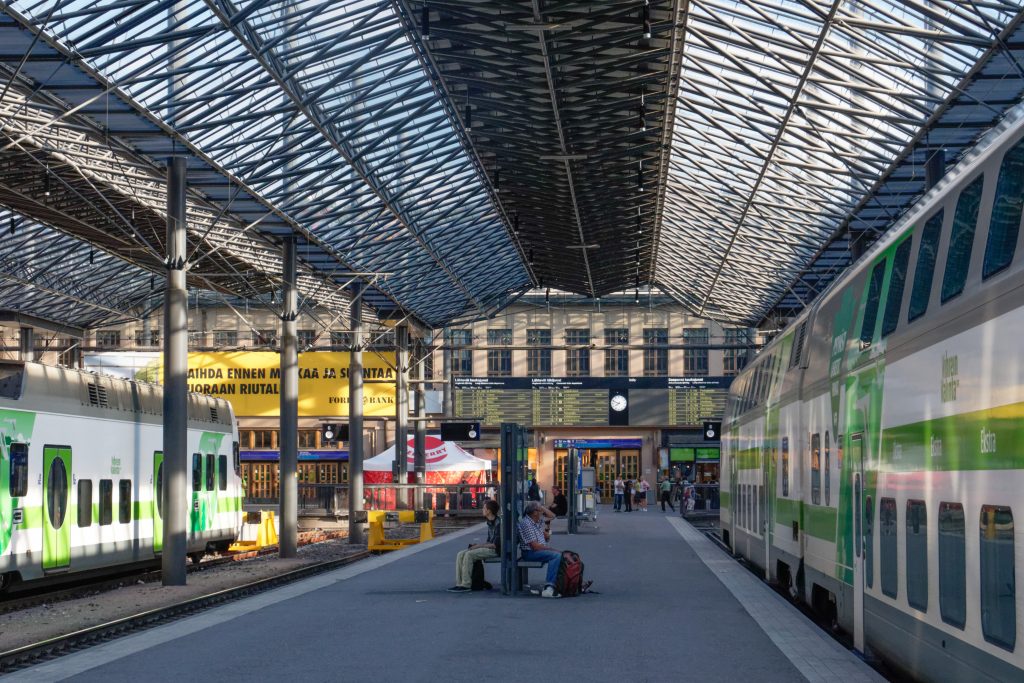 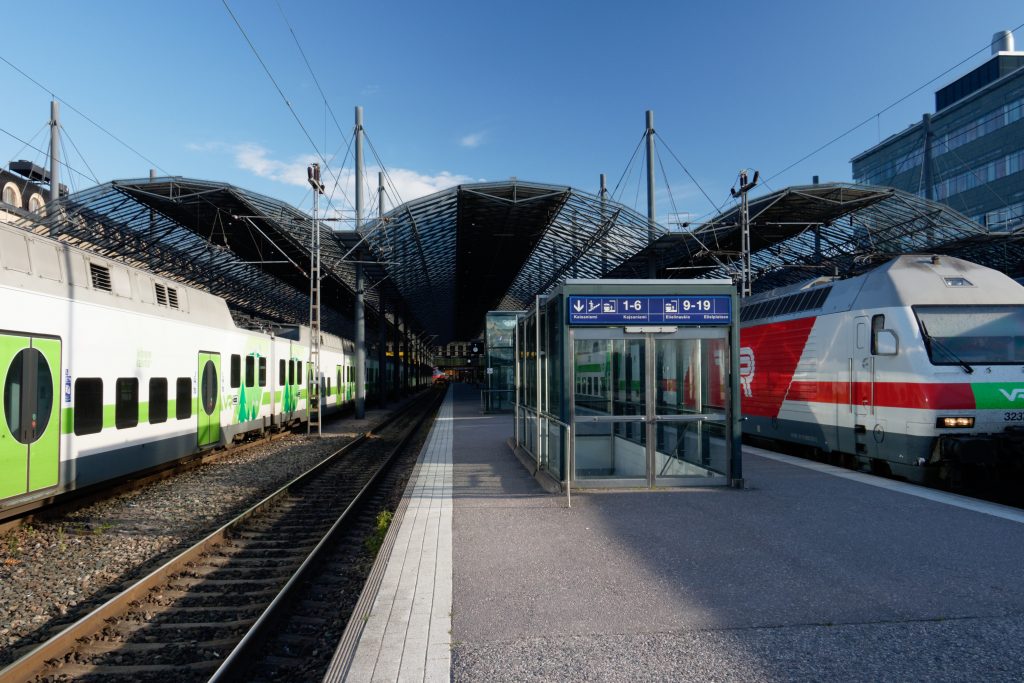 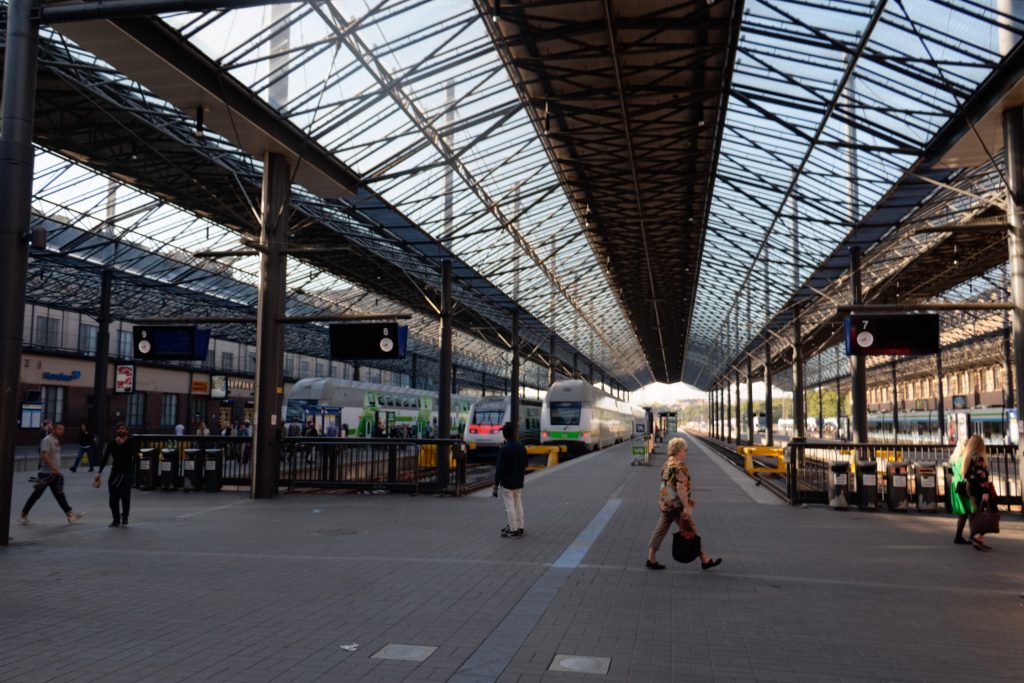