The Helsinki  Central Library Oodi, a project of ALA Architects, is one of the 37 branches of the Helsinki City Library and is part of the Helmet library network. It complements the cultural and media center formed by the Helsinki Music Center, Finland Hall, Sanoma House and the Kiasma Museum of Contemporary Art.

Oodi is not really a library, as it contains only 100,000 books continuously replaced by others brought from a repository of 3.5 million volumes located in another part of the city. It is a non-commercial urban public space, a large reading room and a civic center that is open to all audiences and has become a business card for Finnish architecture.

“… The design grows from the dynamics between the site and the objectives of the library program. The key concept is the interaction between the three individual floors of the building. The public square in front of the building continues inside the building, merging with a catalog of meeting and experience features.The ground floor is a robust, busy and freely updated space, suitable for quick visits and tours.The active zero threshold public spaces are visible, attractive, understandable and welcoming to all visitors .

The traditional atmosphere of the serene library can be found on the upper floor. This is a quiet and contemplative area that floats over the busy center of Helsinki. It offers majestic and unobstructed views of the surrounding park and the urban landscape.

These two contrasting spaces that complement each other perfectly are created by an arched volume of wood. The spaces within the volume are closed and more intimate. The volume of wood is stretched vertically to create connections to the main floors open below and above … “(ALA Architects)

The library is located in Kansalaistori Square, in the Töölönlahti area, in the heart of Helsinki, Finaland, in front of the Parliament Building. The location of Oodi, (oodi means Oda in Finnish), in front of the Parliament (Eduskuntatalo) was chosen to symbolize the relationship between the government and the population, and act as a reminder of the Finnish Libraries Law mandate so that they promote the lifelong learning, active citizenship, democracy and freedom of expression. It also places the new library in the heart of the city’s cultural district, near many of the great institutions of the capital.

The long, narrow site designated for the new library presented some technical challenges, including the need to consider the future construction of a tunnel that crosses under the building.

Creating a multi-purpose building open to all, “a place of freedom and equity for users,” was a key requirement of the 2012 architecture competition to design the new library that ALA Architects finally won with a proposal titled Käännös.

The library is a public space owned by citizens and open to all people. Its design was done by encouraging active participation among residents and partners in several ways so that it can better match the wishes and needs of users. Ideas, tips and dreams have been gathered in urban events and workshops, and through websites and various campaigns.

For example, the Unel-moi !, a campaign that in 2012 obtained more than 2,300 ideas from the inhabitants of the city for the later design of the Central Library. That same year, the library was one of the first to evaluate the participatory budget, which allowed residents to decide which four pilot tests would receive the 100,000 euros of available funds. In addition, the name of the Central Library is based on a suggestion from one of the city’s residents, Oodi, which means Oda in Finnish. An open name competition resulted in more than 1,600 entries, of which a jury chose the final winner.

The Oodi planning process has also used the service design to achieve the best possible customer experience. This concept was used in the design of signs and furniture, as well as in the placement of library materials.

In the words of architect and art critic Aaron Betrsky, Oodi is an example of a new generation of public buildings that combine a traditional library and a community center in a facility with access to information.

The combination of its steel and glass structure with the wood of the facade results in a striking building that combines traditional and contemporary details.

The building consists almost entirely of public space and offers a wide selection of services. The design divides the library’s functions into three distinctive levels: an active ground floor, a quiet upper floor and a closed intermediate volume that contains more specific functions. This spatial concept has developed in an arc that invites people to use the spaces and services below, inside and above. The resulting building is an inspiring and highly functional addition to the urban life of the city.

An existing facility in the Pasila neighborhood remains the main loan facility in Helsinki and the administrative center of the city library. Instead, the new building uses online services and book classification robots to offer users access to almost 3.4 million books, which can be delivered to the building.

Maintenance and logistics spaces are located in the basement, while administration and storage spaces are kept to a minimum to maximize public access space.

This active floor extends the Kansalaistori square towards the interior through a glass wall that contains the entrance and creates a minimum threshold between the interior and the exterior, with a wooden roof that forms an outstanding canopy giving rise to a covered space that can be used for outdoor events.

The purpose of the ground floor is to make each of the library facilities visible and accessible and to provide a non-commercial interior space open to everyone, every day of the week. On this floor is Kino Regina, the movie theater of the National Institute of Audiovisual and a restaurant cafe whose tables will be taken to the outside square during the summer.

On this closed level, also called “attic”, additional services and facilities such as flexible rooms are accommodated for both noisy and quiet activities and intimate corners between the armor of the bridge structure. On this floor, Oodi offers spaces for creation, recording studios, an urban workshop, manufacturing laboratories (music, design, etc.), a games room and a conference space with 180 seats. All library spaces are available for free.

On the upper floor there is a quiet open-plan reading room called “book sky”, with a wavy white ceiling dotted with circular skylights that allow natural light to flow into the center of the room, which has a floor wood that leans up to form an informal rest area in a corner. The full-height glazing that surrounds the room offers sweeping views of the city, with a balcony on the west side that occupies the bulky roof overhang section.

In this space all the possibilities offered by the new technologies of the 21st century are exhausted. Users can read, learn, think, have fun and enjoy a panoramic view of 360º, unobstructed, of the city or go out on the terrace overlooking the Kansalaistori square. The upper floor also includes a children’s area, a terraced forum space called The Peak, a cafeteria and nine live olive trees.

The upper surface of the structure has been used to create a large public terrace that doubles the amount of open-air public space in the library and from where you can observe the parliament and the city.

Technically, the library presented complex challenges. The architectural solution uses a pair of steel arches, which are the backbone of the building, of approximately 800 tons covering more than 100 meters to form a bridge-shaped structure that supports the slab of the reinforced reinforced concrete floor. In this way the architects create a completely enclosed space without columns as a public entrance, groups of rooms grouped around the structure and an open space for the reading room at the top.

Secondary steel frames allow a balcony and a cantilever roof to be suspended asymmetrically from the arches. The design creates open interior spaces, without columns and the possibility that the future road tunnel will extend under the building without compromising its structure.

The complex curved surfaces of the facade have been developed using parametric software.

The building has been constructed using local materials and taking into account the climatic conditions of the place. The Central Library is an example of steel, concrete, wood and glass construction, which is highly energy efficient.

In addition to the last floor, the Oodi façade is made entirely of 33mm thick Finnish spruce wood that conforms to the sweeping curve that extends the building outward to create a canopy, which softens the overall appearance of the architecture around the bay of Töölö.

Wood is a material present throughout the building, together with glass, although in different combinations. While on the ground floor the floor is white concrete with fir wood ceilings, the upper floor combines upside down materials, oak wood flooring and white wavy roof with circular skylights.

Compared to the previous two floors, the intermediate level is a more intimate and a bit bleak place, with relatively small rooms and a rather “industrial” look with black-painted steel beams and floating floors covered with HPL laminate and gray carpet, only The structural lattices are clad with wooden panels.

The structural framework is made of steel and the slabs of tensioned concrete floors. The main structures have been manufactured in Finland, although the glass and some wooden structures of the facade have been imported.  It has large floor-to-ceiling windows.

Check out my gallery at http://www.pixael.com/en/pictures if you want to see more pictures.  You can follow me on https://www.facebook.com/giuseppemilophoto https://twitter.com/pixael_com https://instagram.com/pixael/ 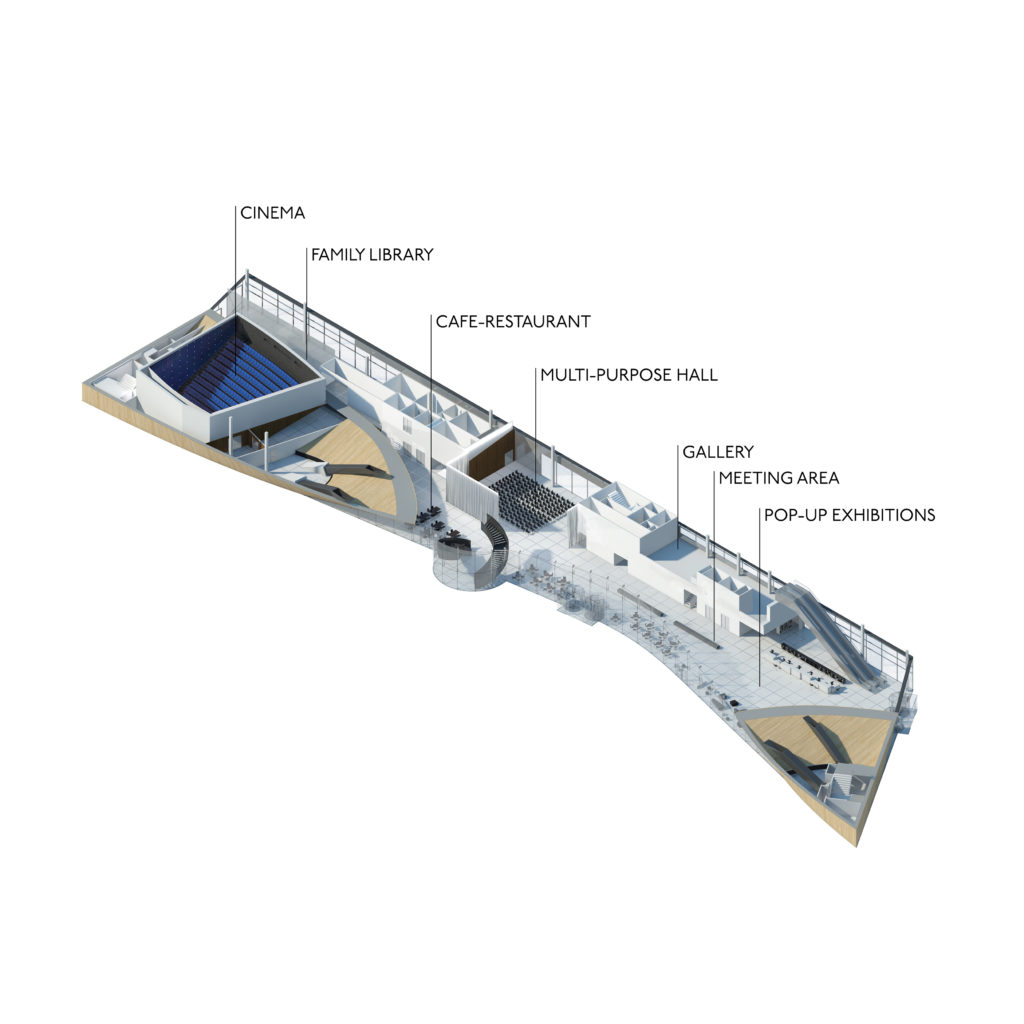 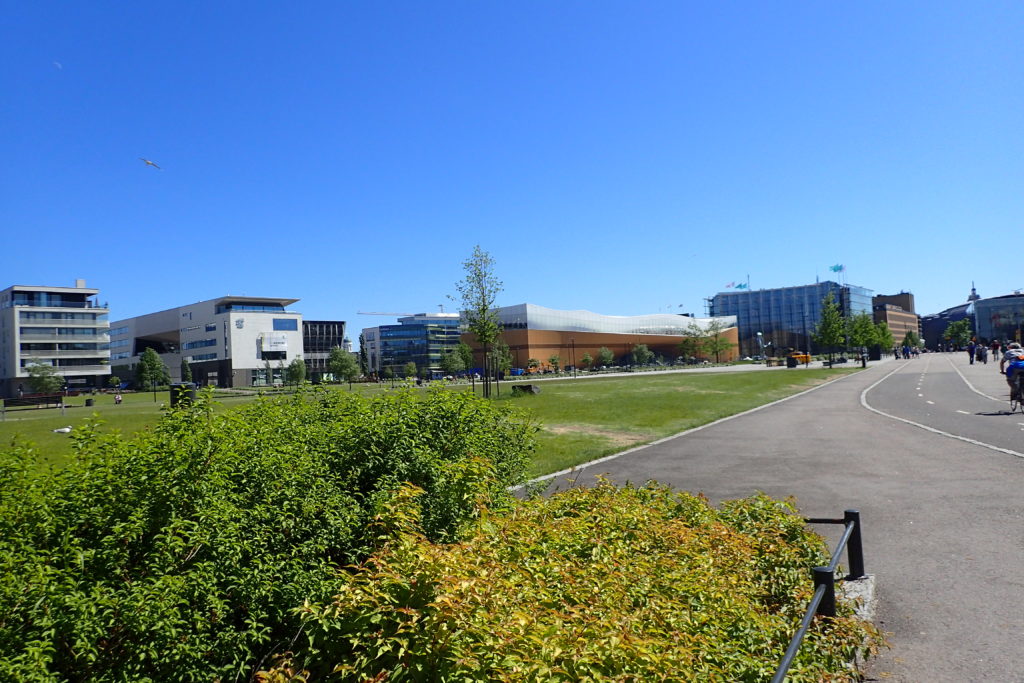 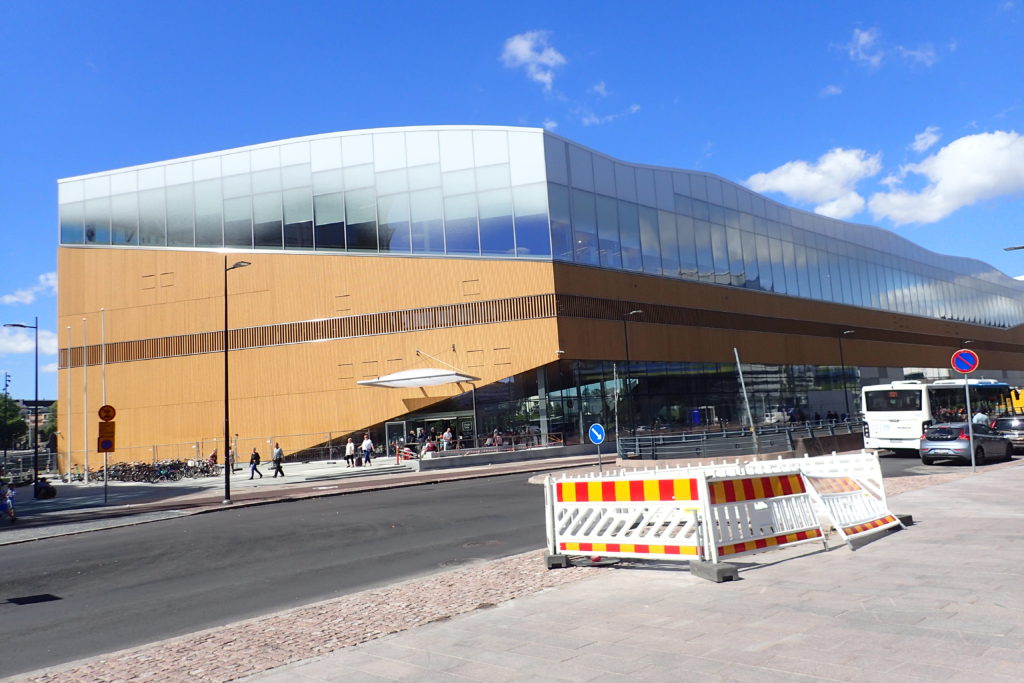 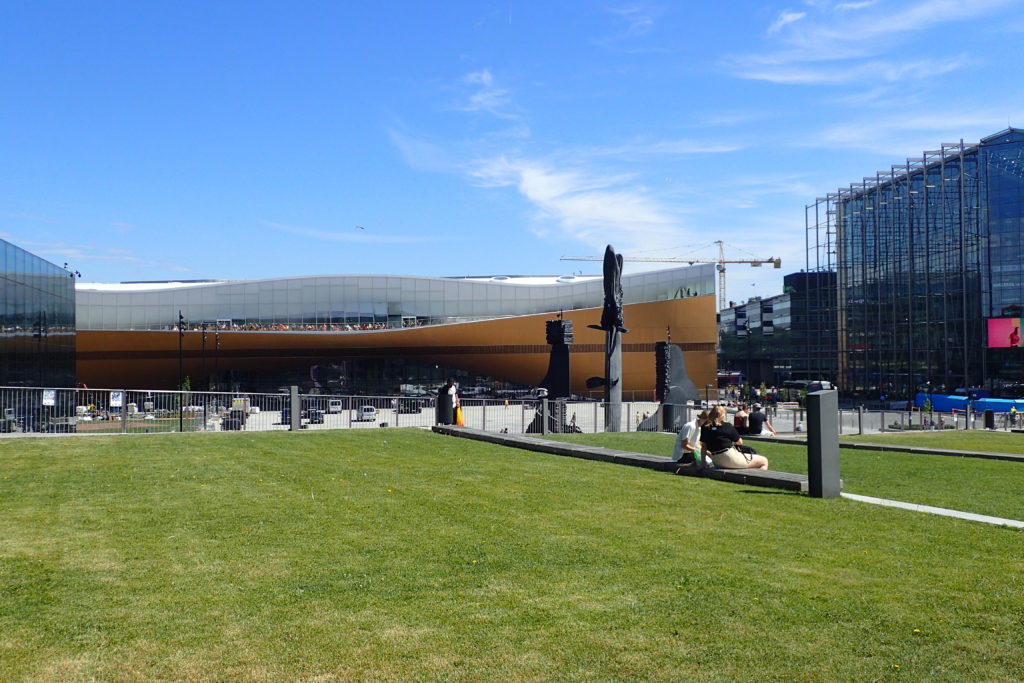 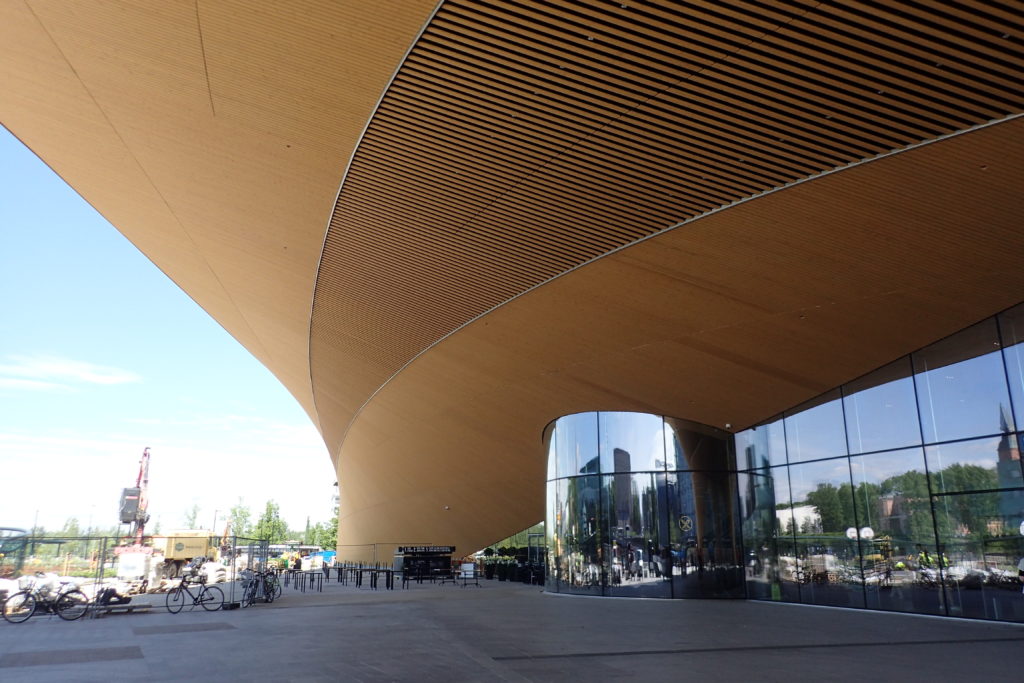 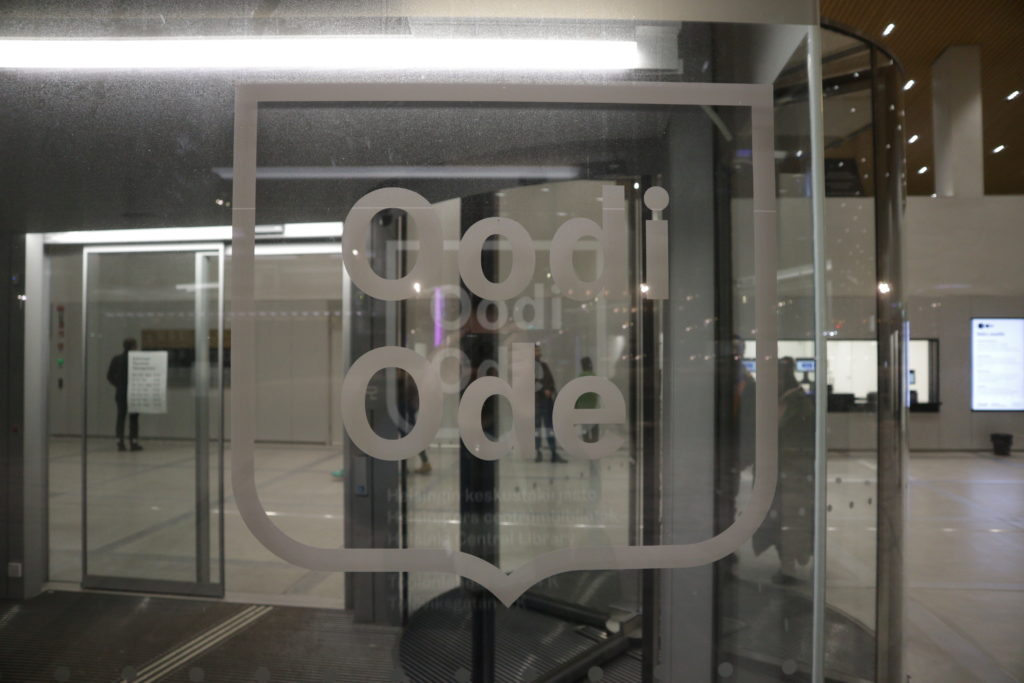 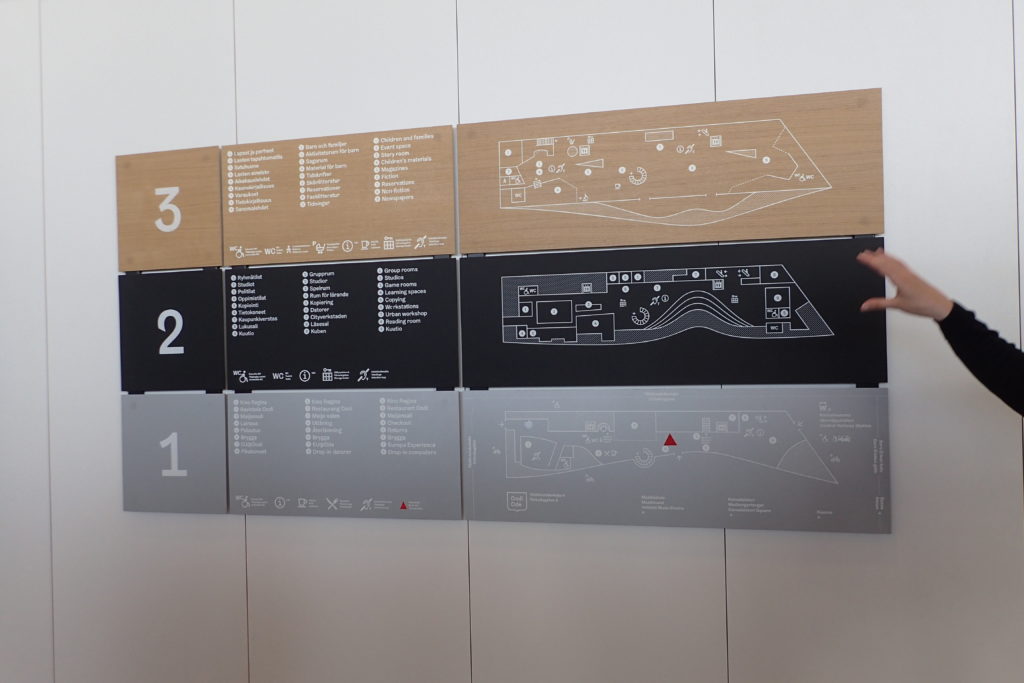 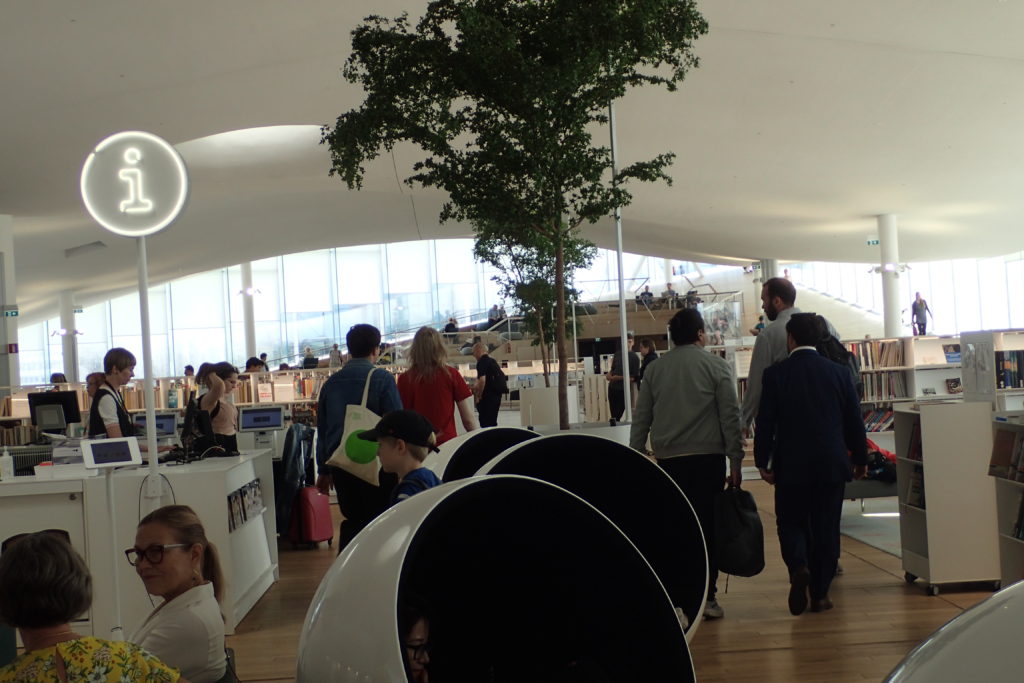 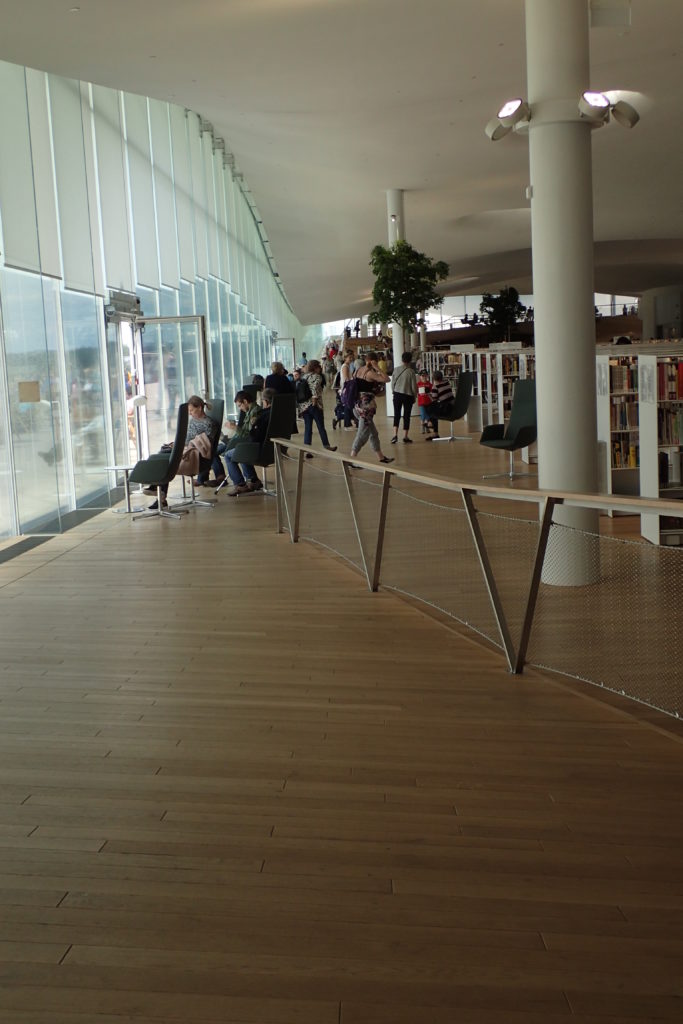 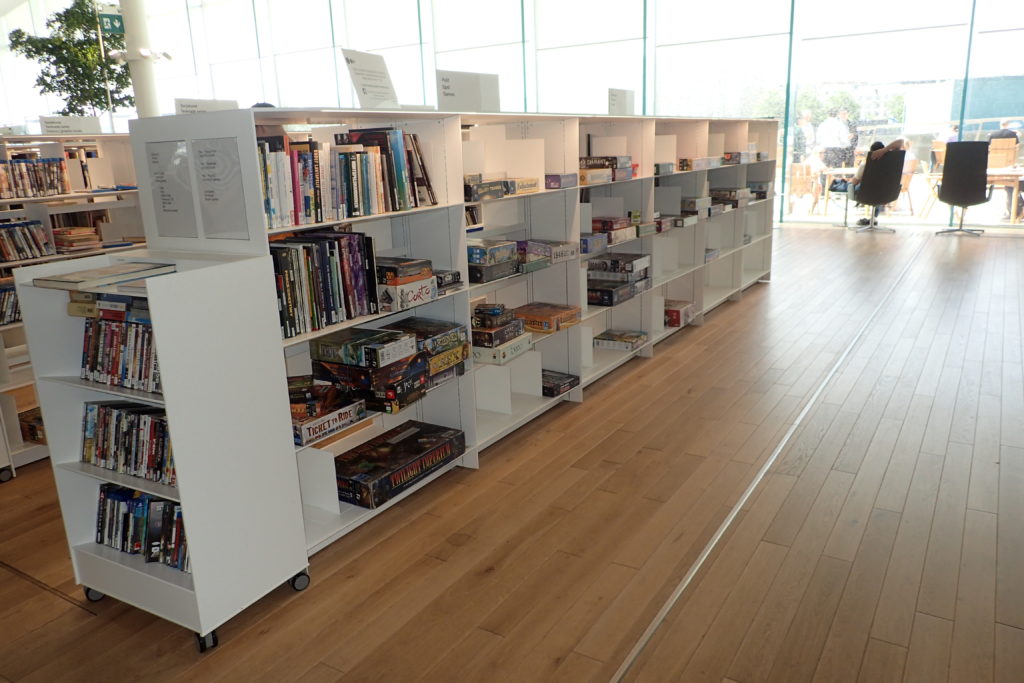 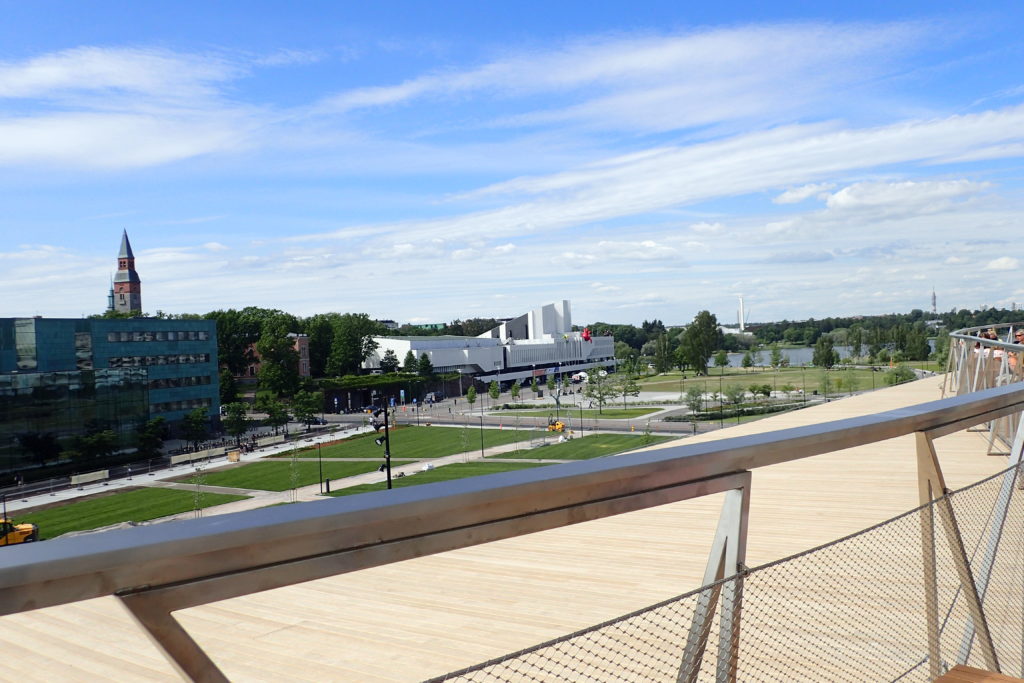 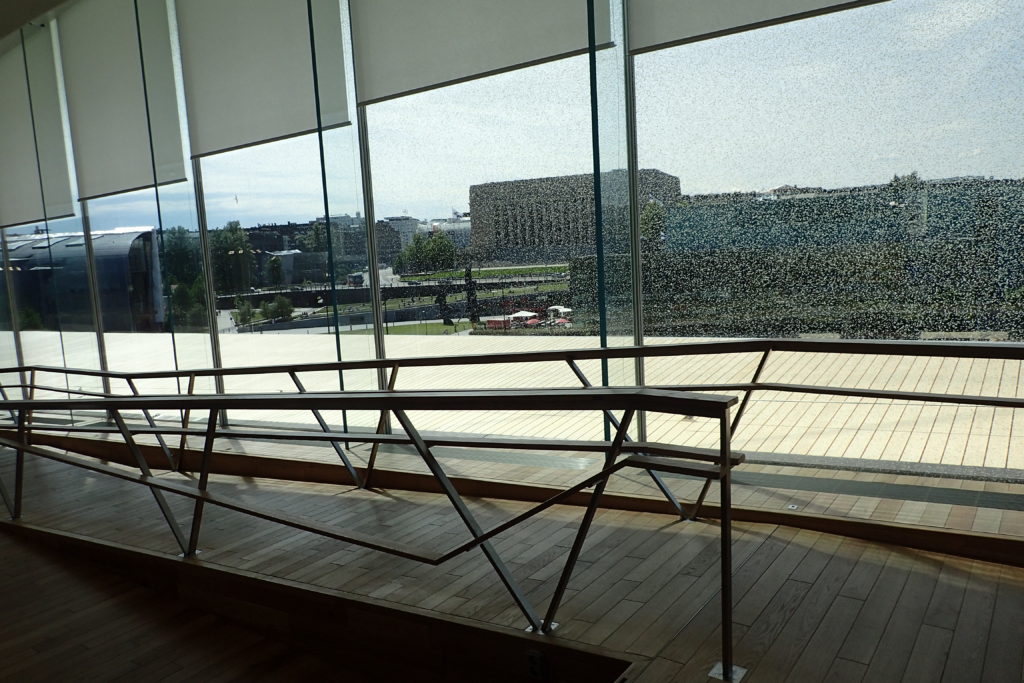 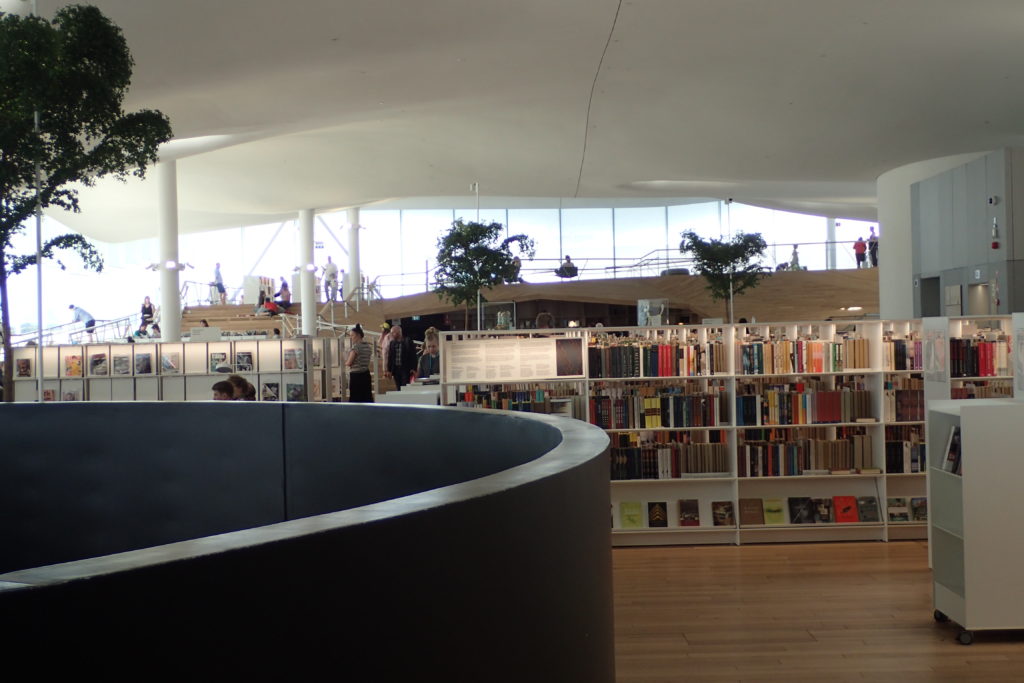 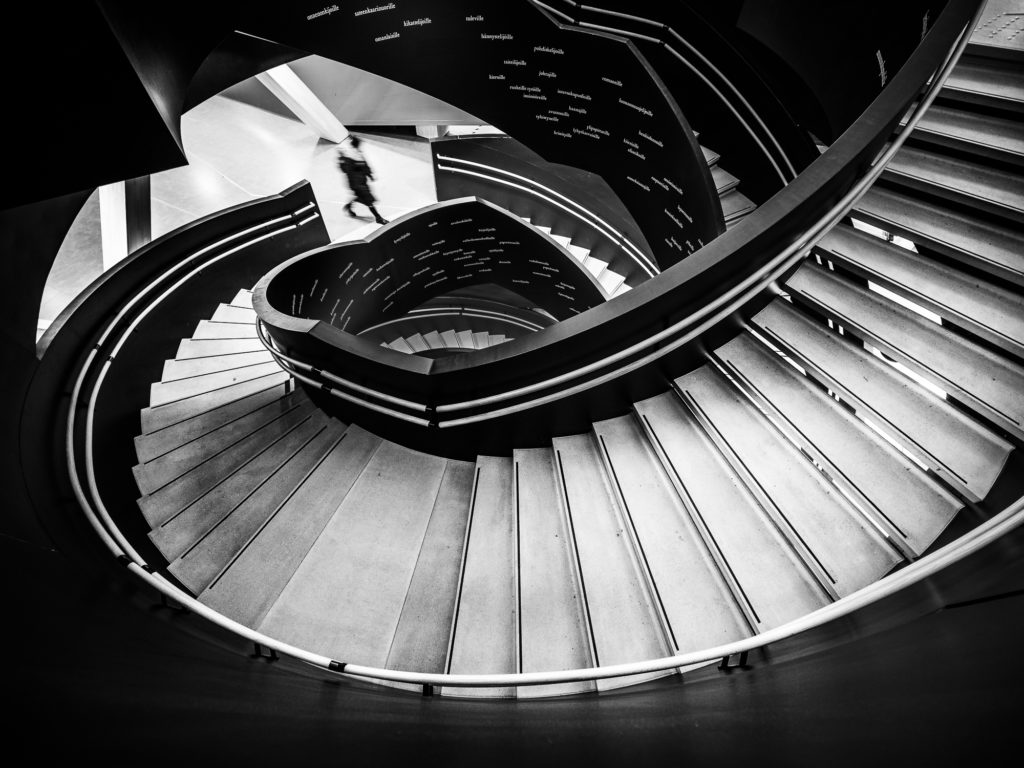 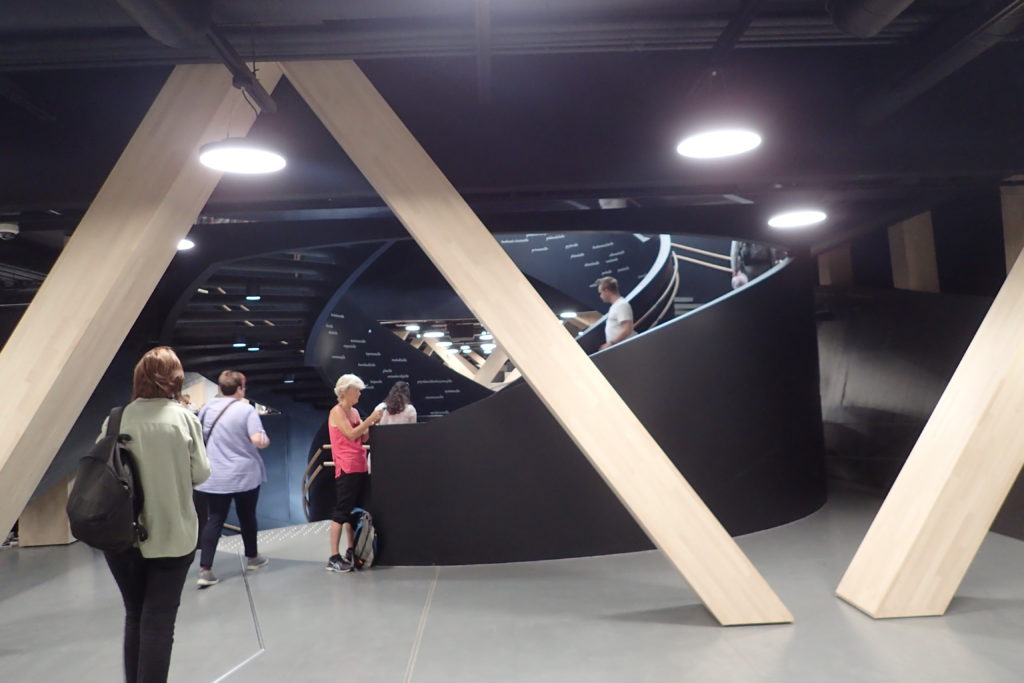 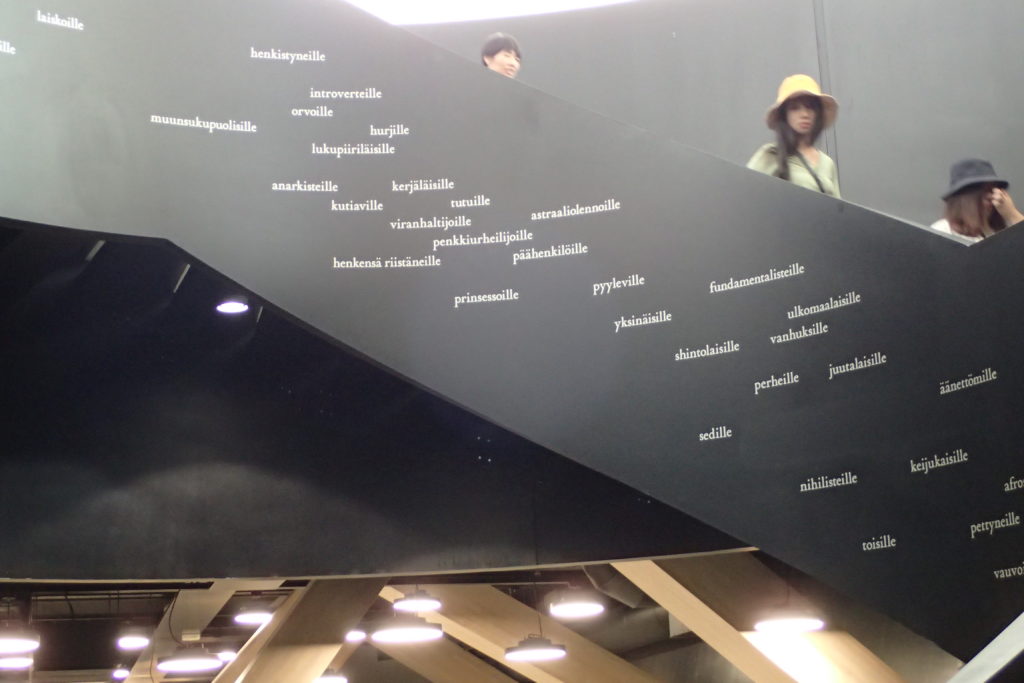 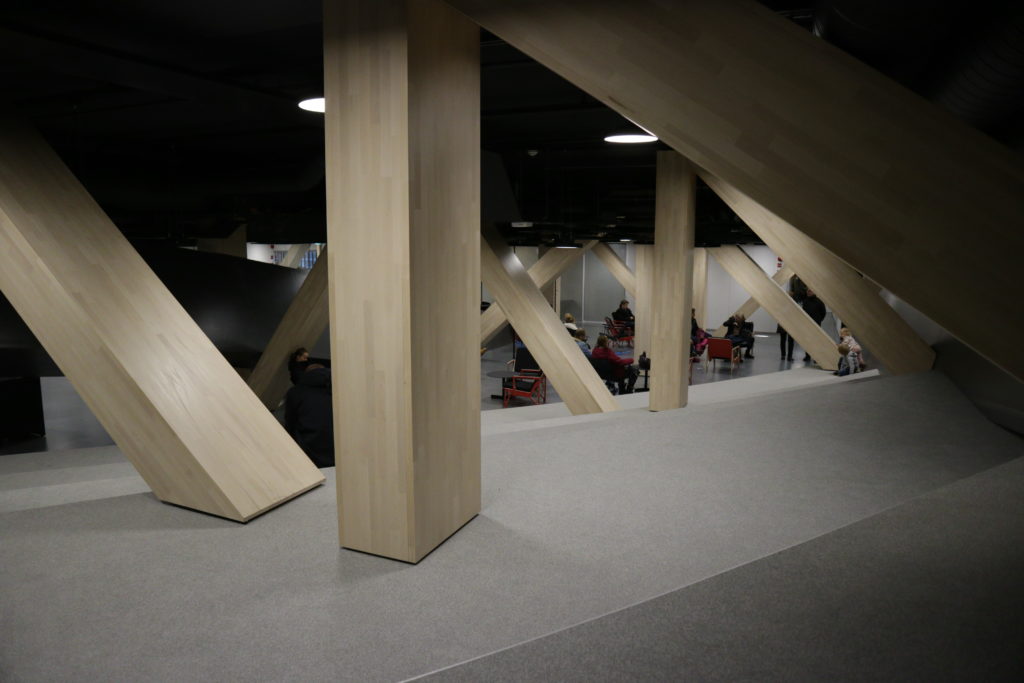 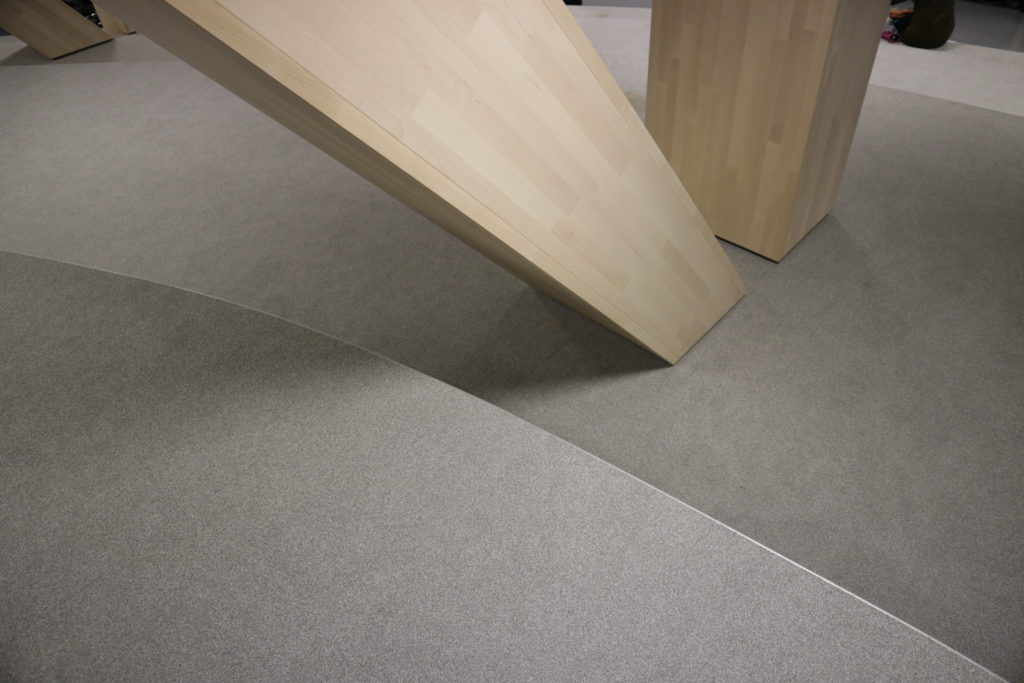 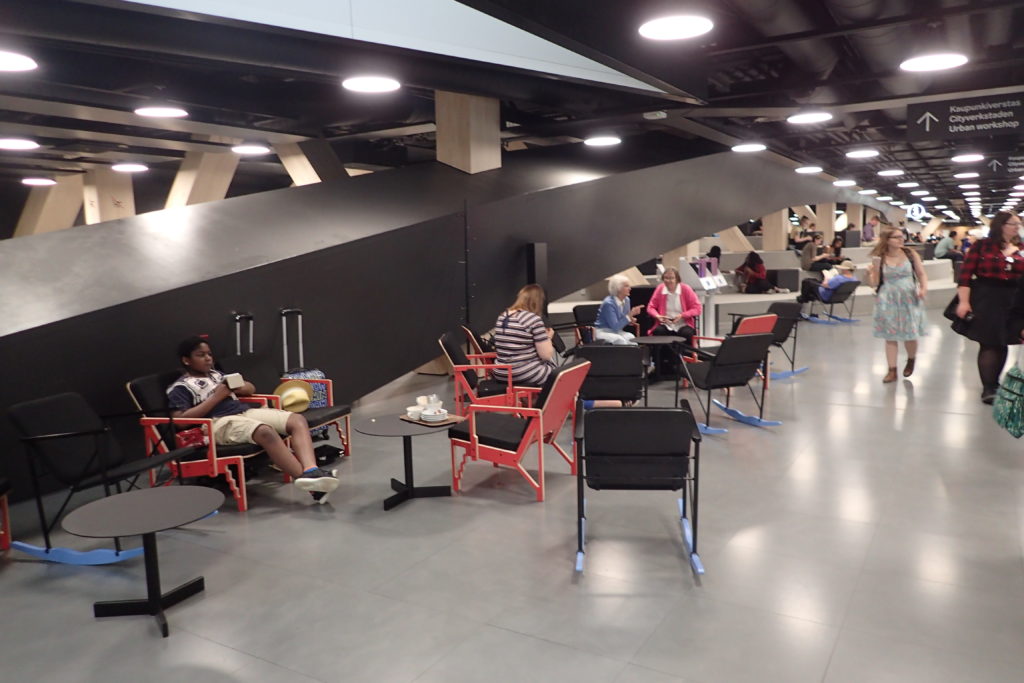 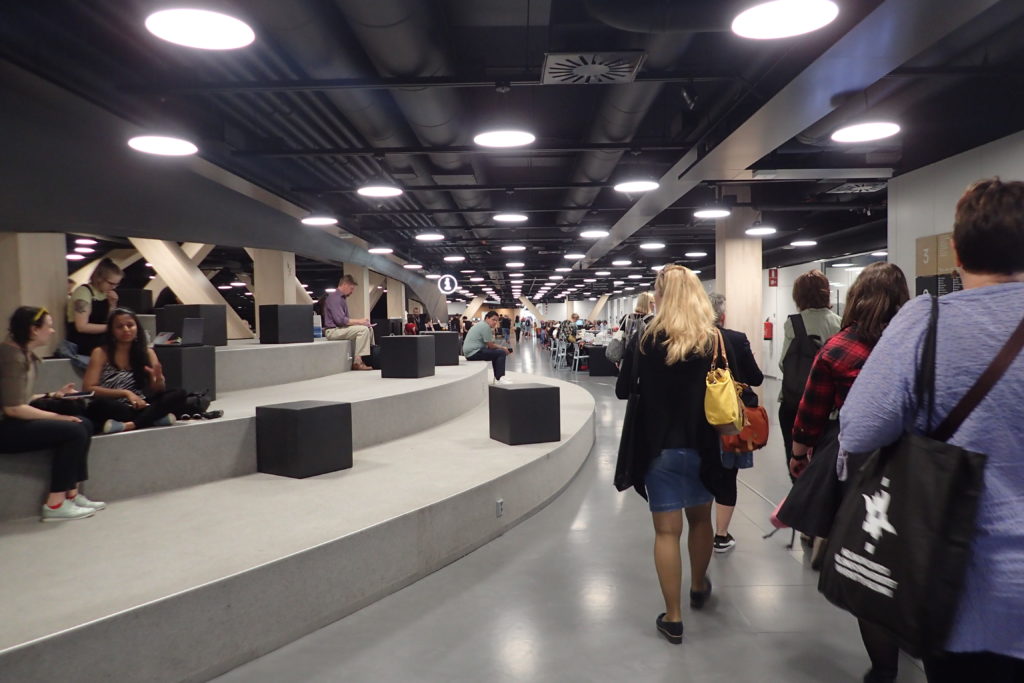 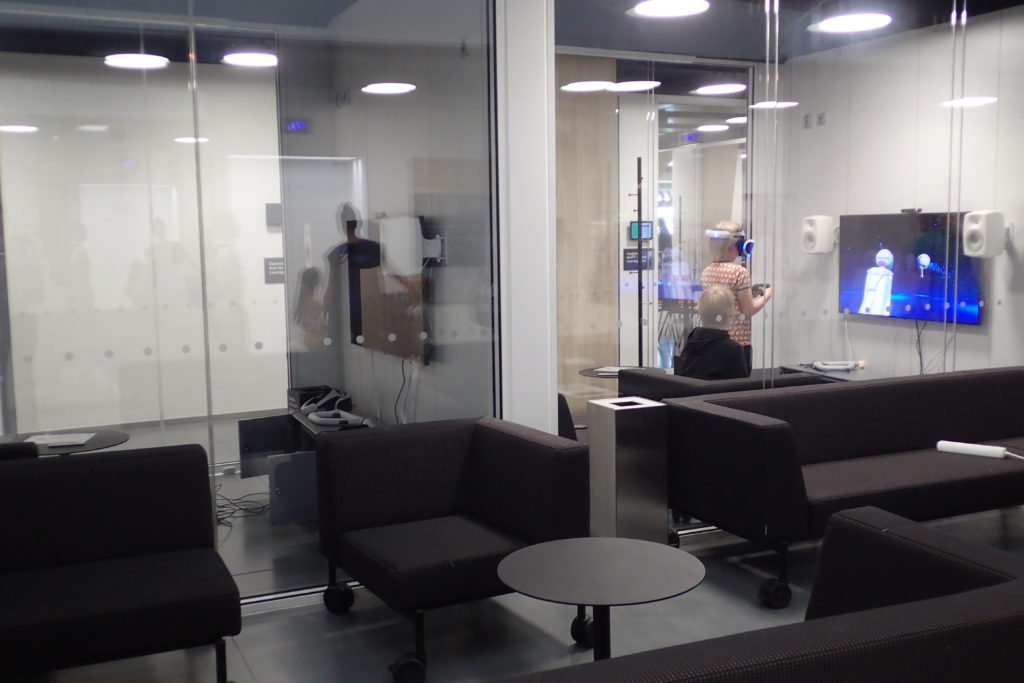 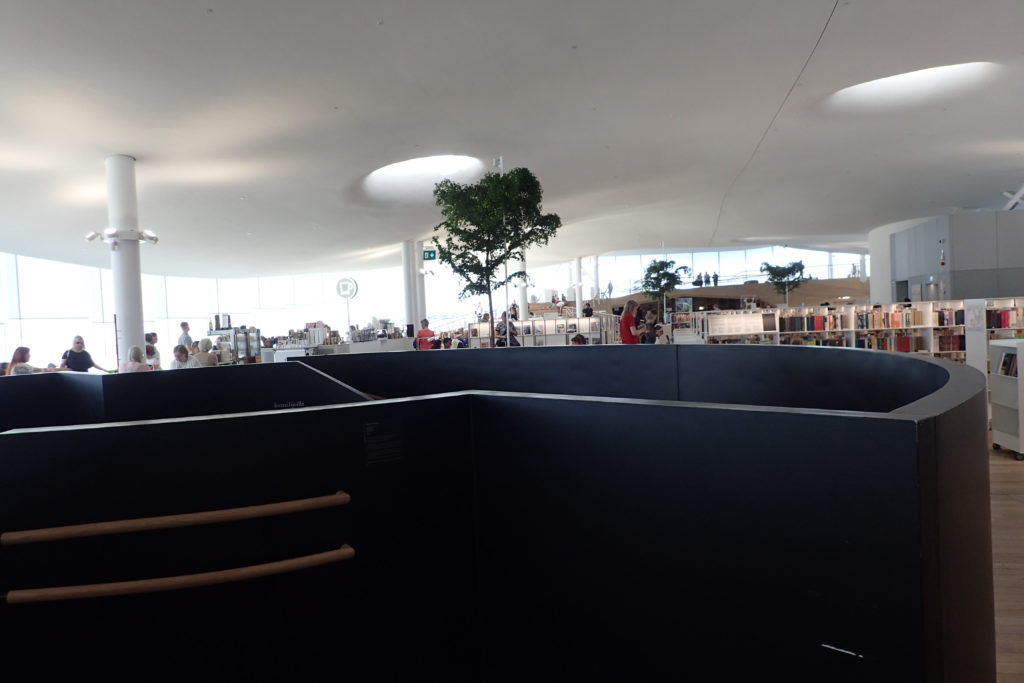 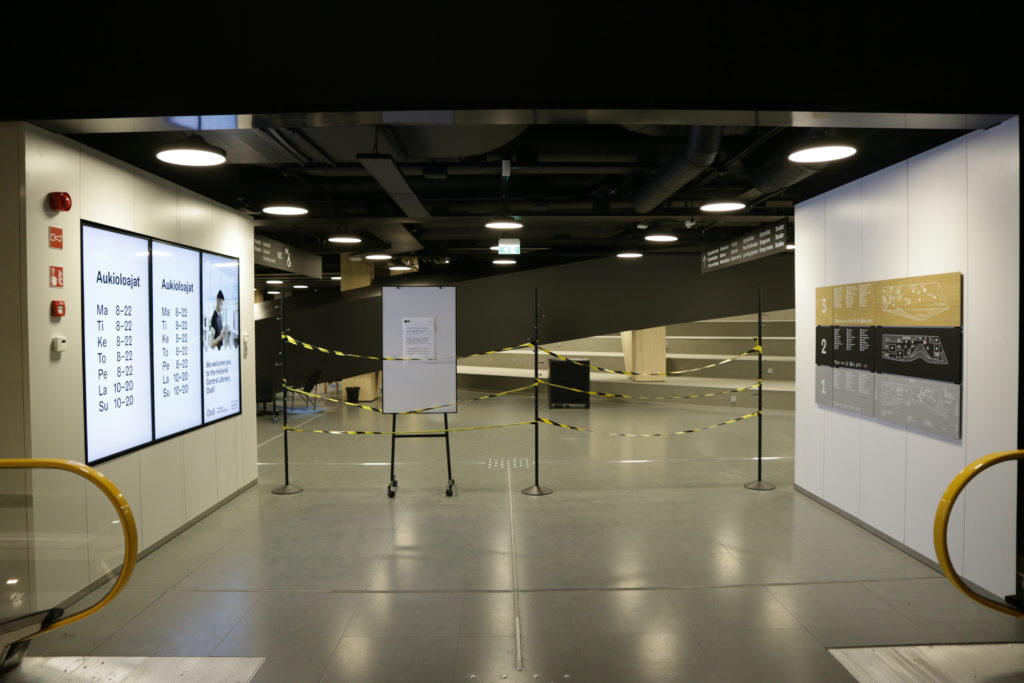 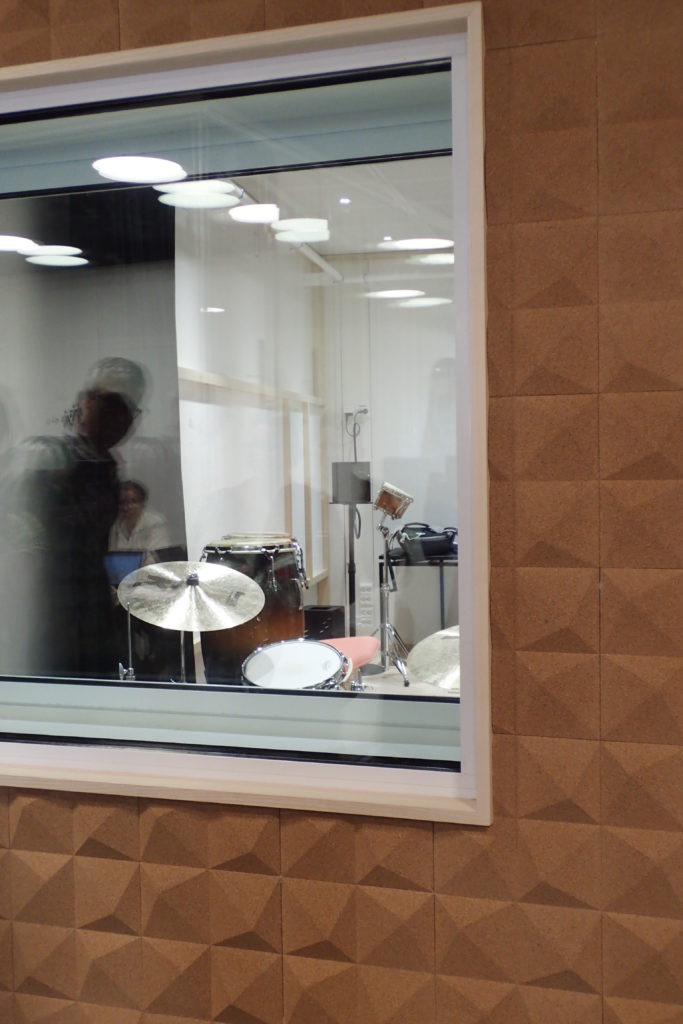 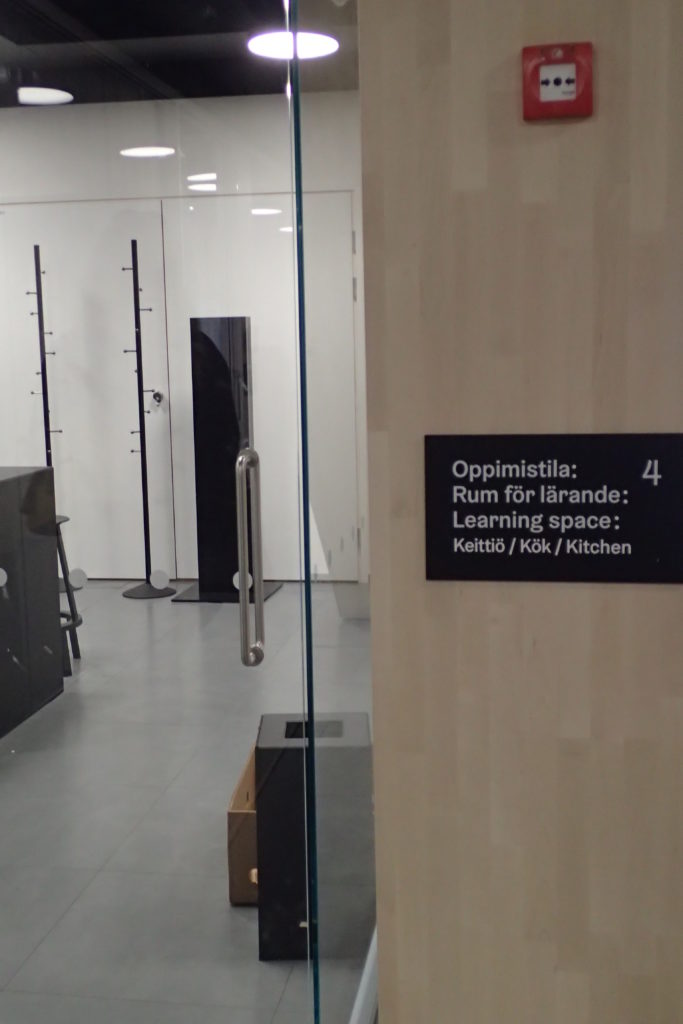 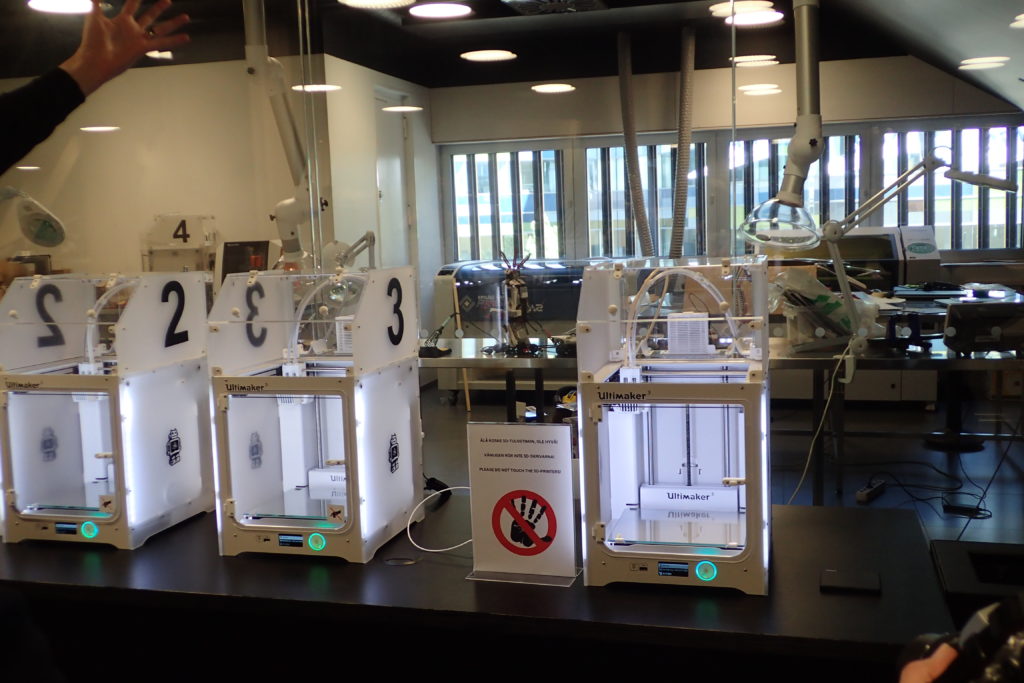