In 1994 the Norwegian government realized the impact it could have on its economy the boost tourism in their country. He quickly came to a consensus that their nature was the best claim that Norway could showcase and promote to the world, and for them the “National Tourist Routes in Norway” plan that sought to provide equipment specially designed for tourism launched an number of roads along which nature offers stunning landscapes especially.

While the plan began in 1994 it was not until 10 years later when it was really driven and 18 roads were selected covering a total of 1850 kilometers. Most of these roads run through the west coast of the north as well as the mountainous south. The project should be completed by 2015 and all interventions had an overall budget of approximately 100 million euros.

To achieve these 18 roads transform into a tourist attraction responsible authorities decided to commission a series of architects among them are such prominent names as Margrete Friis, Peter Zumthor, Pushak arkitekter, Code Arkitektur, Manthey Kula, Snøhetta AS, and Jensen & Skodvin among others, that performed specific interventions along these routes as lookouts and rest areas.

The rest area is located on Highway 889 near the town of Havøysund, one of the northernmost of all Norway and therefore also of the world. 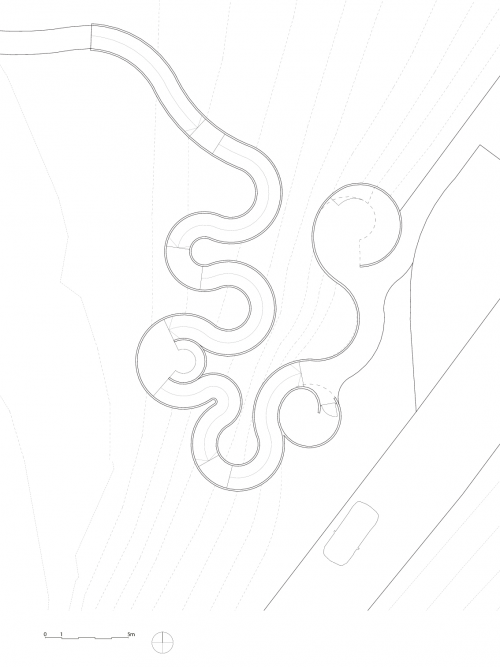 According to the architects the project aims to magnify the experience that is down from the road to the beach and the sea. To achieve this it was necessary to extend the duration of the decline itself, which required that the access ramp was much longer than is strictly necessary and therefore had to be folded back on itself to meet the points of departure desired. The folds of the route are studied to generate new perspectives of the landscape that would otherwise be lost visitors, some of them even framed by circular openings that are on the walls, and through a series of benches placed against vertical surfaces that delintan ramp it becomes itself in gazebo, offering not only a transit but concave and convex spaces where visitors can stop and rest in the midst of an extreme landscape that some have come to describe as “almost lunar”.
The tour ends in a sort of pavilion with surfaces that may serve as tables and benches where visitors and locals can go to eat and group picnics.

Another major concern of the architects was to create a universal access, which resulted in the form of a ramp as the only way to access the place of a more conventional arrangement of ramp and stairs.

Due to the extreme latitudes where it is located and encontrase amid a road, the project should be self-sufficient to the greatest extent possible, both as maintenance energy level. Hence they opt for the use of coarse materials and lighting not be included. The end result ensures that with a little respect from its visitors the project can last for years without needing to be cleaned even by public agencies.

The concrete structure is as a whole, both the slab which constitutes the chute to the vertical walls that delimit it and in turn serve railings.

Along the route alternates between the ramp support direct contact with the ground or raised on concrete piles to maintain a constant slope.

The material which comprises 99% of the project is reinforced concrete, with only a few details in the wood flag culminating the tour.

Concrete surfaces retain the texture of the form that gave them shape and consisted of thin wooden slats placed vertically in order to fit the sinuous shapes of the project as if it were infinitely faceted circles.