The harmonic blue building, which cost $ 125 million and that rests on the Mississippi River, is the first building designed by Jean Nouvel in America. This 26,400 square-foot building replaces the former headquarters of the Guthrie Theater, designed in 1963 by architect Ralph scrape commissioned by the Irish designer, Tyrone Guthrie.

That building housed an auditorium facade mondrianesca modernist designed so that none of its 1,100 visitors were more than 15 feet from the actors. The idea was developed between the architect Rapson and Tyrone Guthrie, the British theater director who spearheaded the creation of a theater born in reaction to the commercialization of Broadway, which housed a major American regional theater companies, which combined the classical repertoire with experimentation as opposed to the products ‘light’ that took over New York in the sixties.

The new theater is located on the banks of the Mississippi River in the neighborhood of the mills, off the Falls of St. Anthony, in the city of Minneapolis, Minnesota, United States, surrounded by silos and factories.

The site is a modernist paradise located in a strip that was once industrial, along the Mississippi River. Together the complex is a grain elevator, similar to that Le Corbusier hailed as the American equivalent of the Parthenon, as “magnificent first fruits of a new era.” Across the river stands a power generation plant, north, water flows through a series of locks beneath an industrial bridge.

Nouvel, aware of the historical weight of the institution, has respected the original scenario, but giving a touch of their own. For the building’s exterior was inspired by the surrounding landscape, dominated by the presence of the Mississippi River, to which Nouvel has launched a cantilever bridge, the Endless Bridge, the Endless Bridge, which can be accessed without purchasing a ticket for the theater.

The exterior is a composition of metal and glass that evokes industrial forms adapted to modern times.

The large circular volume, which protects the halls of the theater, evoking the shapes of the adjacent silos, while the rectangular structure of the towers is in harmony with nearby flour mills.

The landscape of Mississippi in Minneapolis, is defined by the falls, the locks and bridges, the great mills and silos, they left their impression on Walter Gropius and later in Le Corbusier, Bruno Taut, Erich Mendelsohn or Moisei Ginzburg, who labeled them as icons of modernity. The Guthrie Theater takes the silhouettes of factories and buildings of downtown, without imitating, with a record absolutely own.

From the shore, shows a dramatic cantilevered 53 meters, contemporary interpretation of the no less spectacular silos around him, making both the volumes of the towers of downtown, like the cylinders of the silos, crosses and blends.

The industrial buildings in the area, along with a landscape with windmills and wheat, have also found their reflection in the exterior of a building on which were also reproduced posters of classic works belonging to the glorious past of the theater. Slender tubes of his banner, who spread messages of LED, evokes the smokestacks of factories and helps you to gain height to match the horizontal extension. The tower, which itself is 47 meters high and 24 meters which exceeds auction serves as a signal to announce the shows and works posted on the skyline.

… “It’s because the architecture of Guthrie for their volumes, their colors, can be read as the distant echo of the silos, it is because the main foyer is advanced as a bridge to see the falls, here are the reasons of dialogue between the insignia of the mills and the theater, here is also why industrial walkways are replaced by skyways, and here at last why, along with direct reinterpretation Thrust, two new theaters, one front, another versatile, complete industrial metaphor the new Guthrie.

All the rest is just architecture. Without nostalgia, because this dialogue is evidently a pretext to invent and use techniques and materials of the early twenty-first century. History and modernity, then as now are friends, and Guthrie in the middle of mills and bridges, discover the legitimate ambition of becoming a clear landmark: the vitality and inventiveness of the theatrical culture in Minneapolis in 2002.
Jean Nouvel

Its architectural program is characterized by having in one place three types of rooms, linked through a cross passage and arranged vertically in height that allows the viewer to combine experience with urban spectacle:

Room 1100 seats, protected by the semi-cylindrical volume repeats the open layout of the old Guthrie Theater, the old shell-shaped arrangement where all the asymmetric public is equally comfortable condition. The asymmetry of the room, his fiery polychrome irregular polygons and acoustic ceilings dancers, break the rigidity of the geometry. It covers levels 3, 4 and 5.

This room seats 700 with a frontal arrangement is totally opposed to Thrust Stage, distinguishes between public secular space and sacred representation is intended to contemporary repertoire. It is located in the rectangular volume, occupying parts of the level 3 and 4.

At level 9, this experimental hall with 250 seats, serves as a theatrical laboratory. The tower rises above the rectangular volume containing the experimental hall and a foyer that extends open on the room and is flanked by the “orange box”, a viewpoint on foreign risky projects into the night landscape.

The cantilevered bridge stretching as a lookout over the river ending at a steep angle. It offers a ride opened, suspended in space. Developed over the entrance it serves small forward. At levels 5 and 6 on its western side lies the great hall and the east front room.

Over this bridge equipped with cracks and openings where you experience both visually and physically, punctuated by a walk on level ground is not always between the foyer and the balcony above the Falls of St. Anthony that is heard when the window end facing the river is open, and exit to the balcony, where the floor is hidden, giving the impression that he dives to become an outdoor theater with the landscape as a backdrop.

“Endless Bridge” as it is called this overhang, if in a vertical position would have a height equivalent to a 14 storey building has a capacity of approximately 1,650 people at 35 feet above the ground and it is a bar and a open terrace, but its role is largely symbolic. In embarking on a display so spectacular structure for what many would consider a secondary space, Nouvel is positing and defending the value of the tangential experiences, often the most important thing in life.

On either side of the entrance hall opens two long escalators leading to the level of the foyer and rooms.

The real heart of the building is its connective tissue, something like a public foyer of dual circulation, where spectators can meet during the interval. At one extreme, a large window overlooking the area where the resort workers ordered the utility, and from the opposite side people can go to the bar and the terrace of the bascule arm.

Theater is a spectacular metal and glass.

The end of the bridge window, overlooking the Mississippi River is blue glass, which gives color to the landscape look unreal, while the stained glass of the “orange box” has no other purpose than to dye the mood of joy viewer.

On the outside the walls of the theater are scenes that marked the old Guthrie, inside both the walls and ceiling of the foyer of the bridge as ghostly silhouettes hint at other times in the theater. Printed on paper, these images, depending on distance, become part of the materiality of the walls.

The windows are framed in a mirrored steel that blends city views with refracted images of nearby buildings. When the weather is warm, the breeze coming through a large open window enter the environment of outer space smells.

In the towers that rise like chimneys are seen ads with orange LEDs programmed as high tech as the three electronic screens that broadcast information or images on the works exhibited. 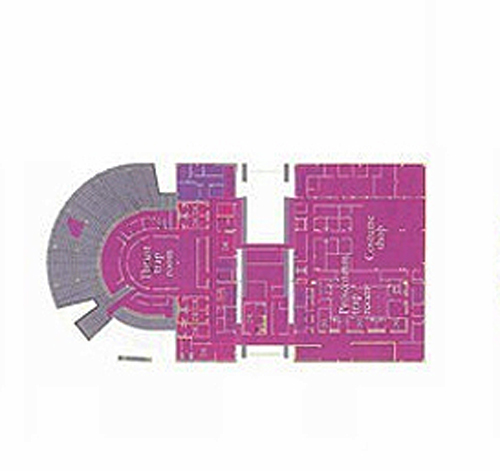 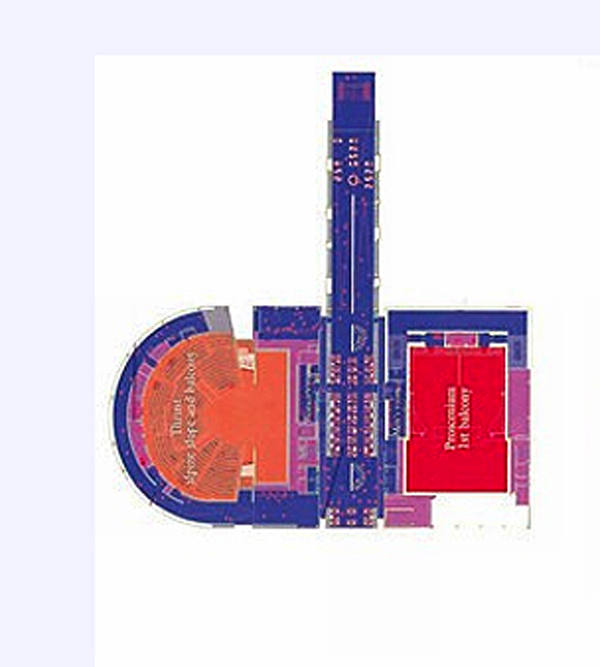 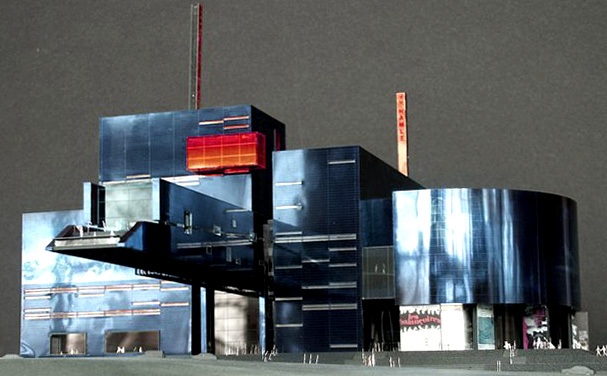 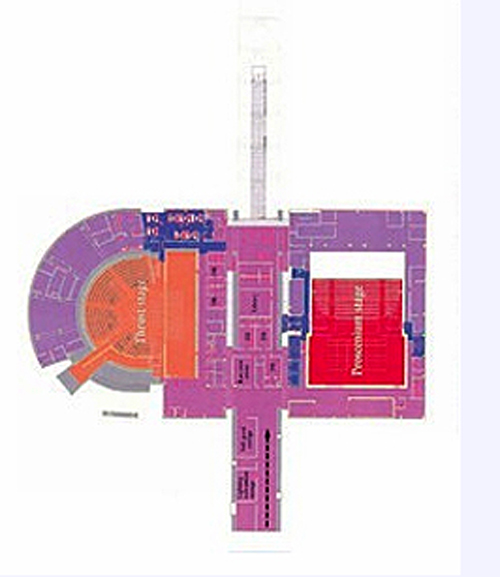 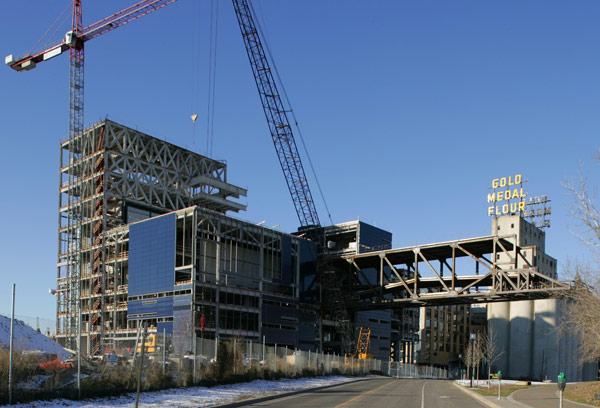 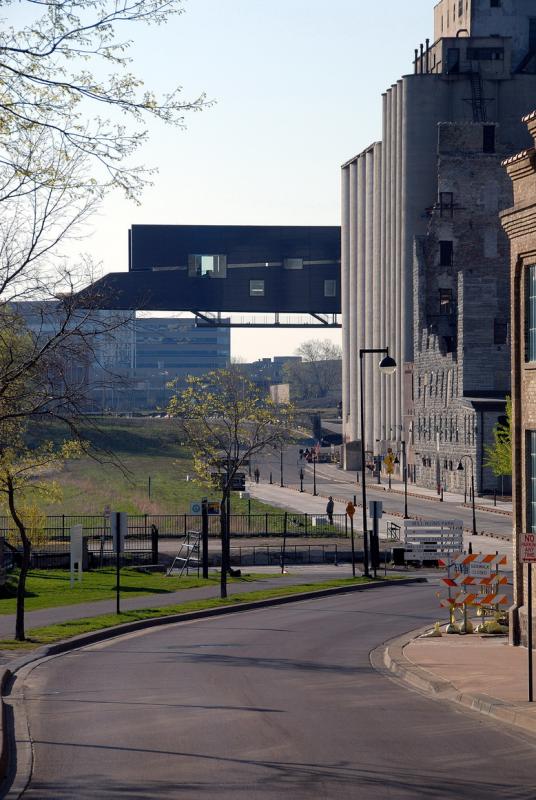 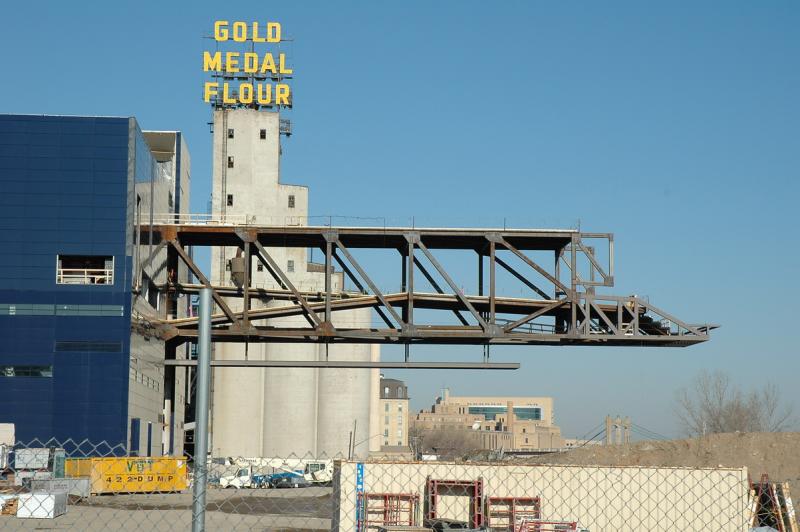 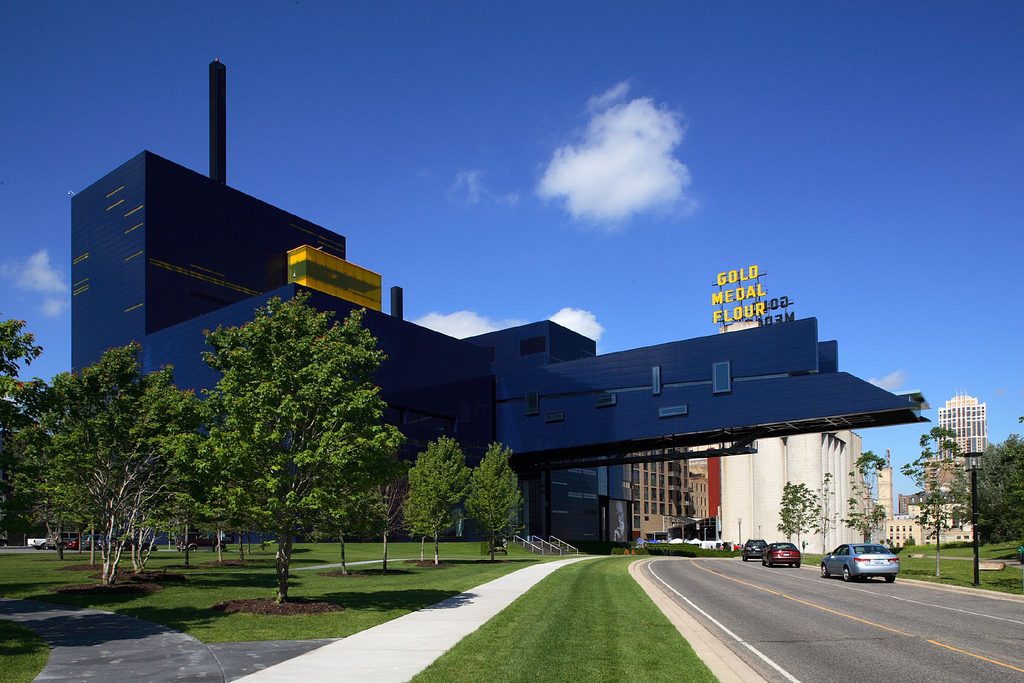 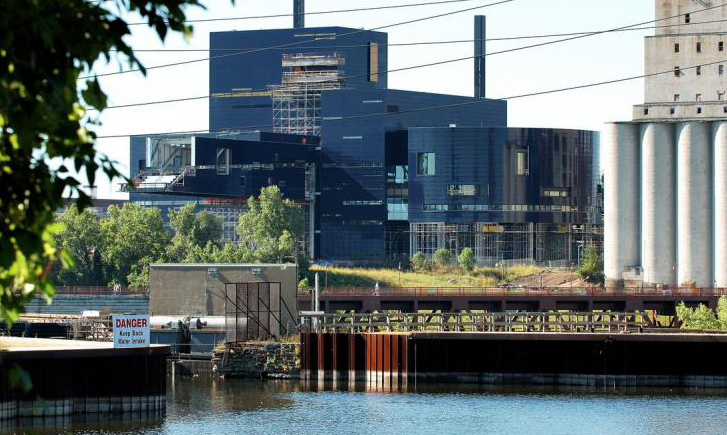 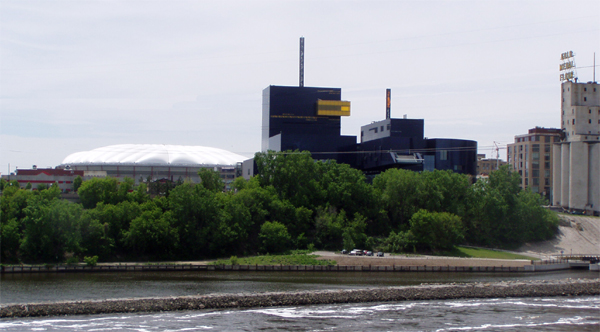 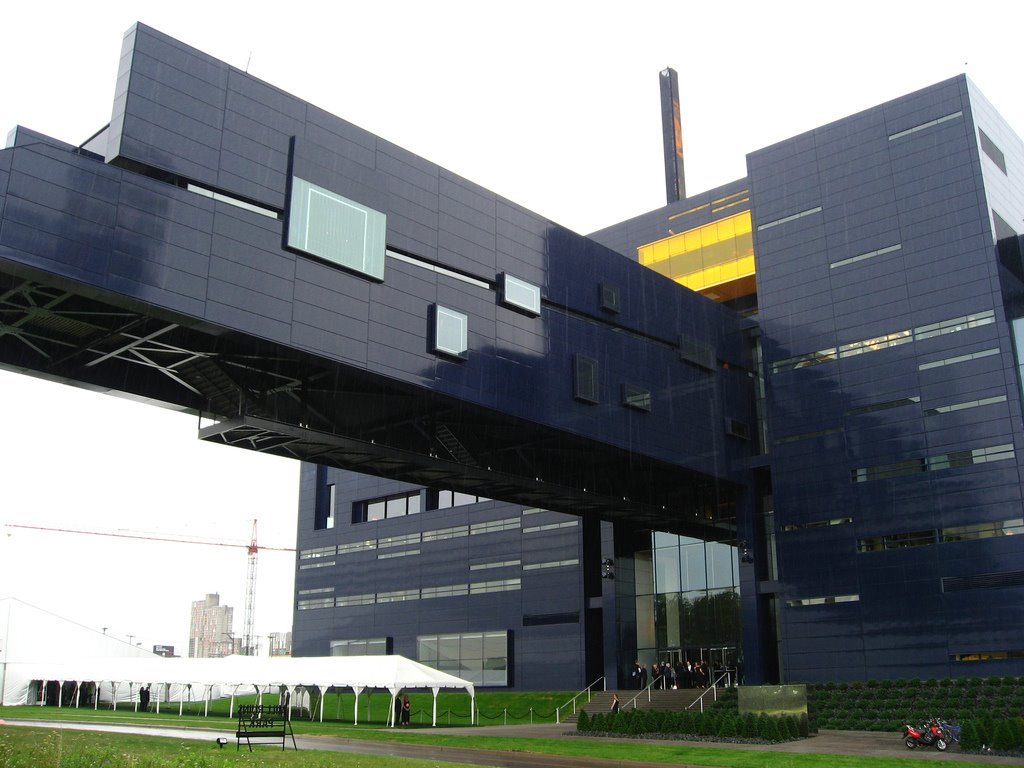 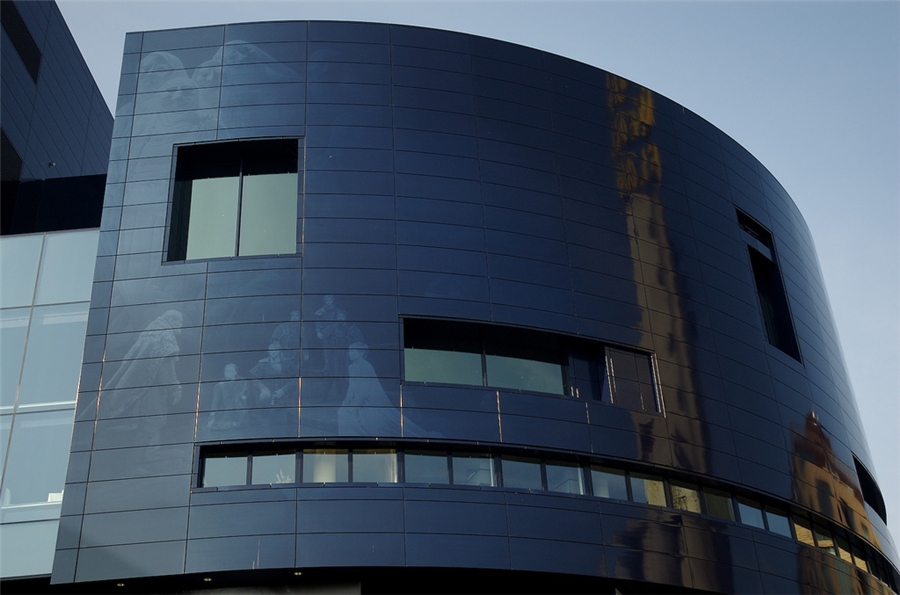 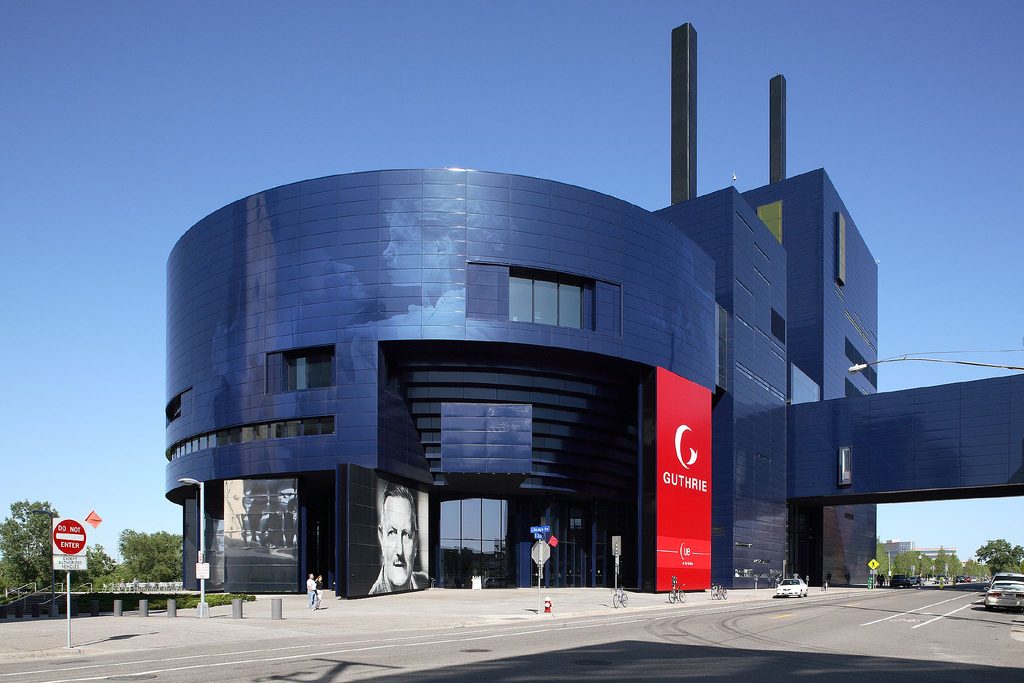 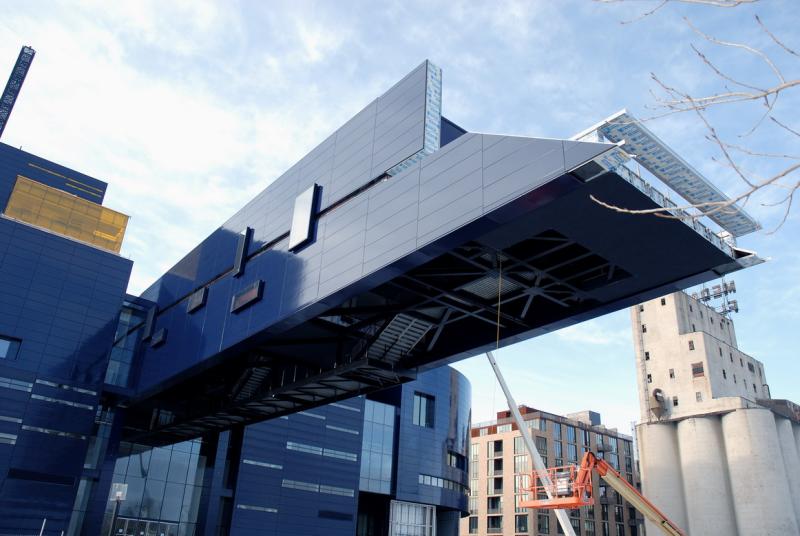 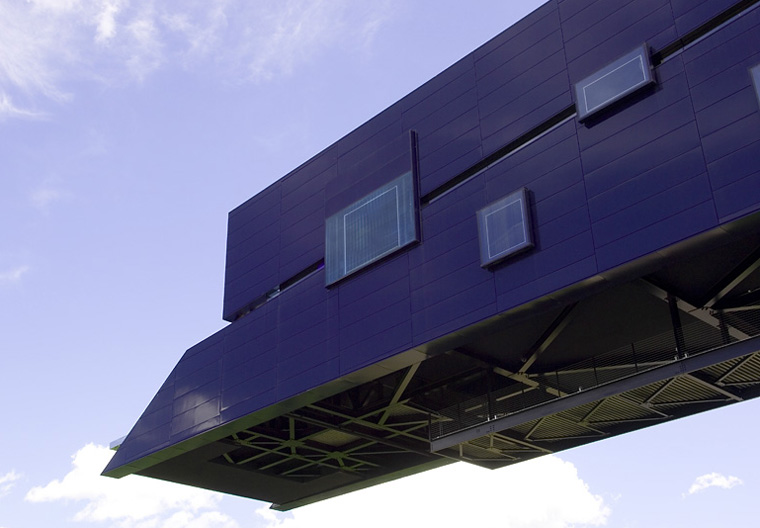 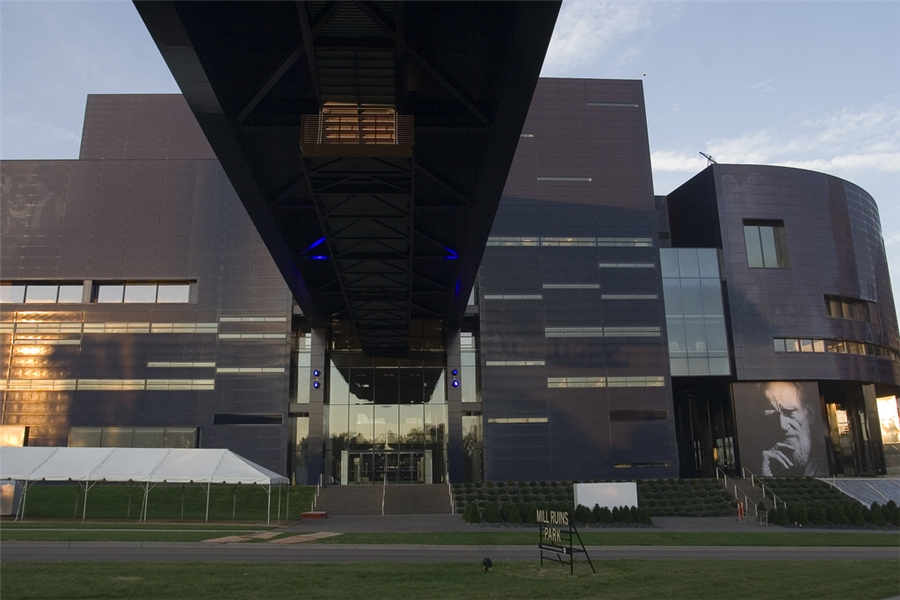 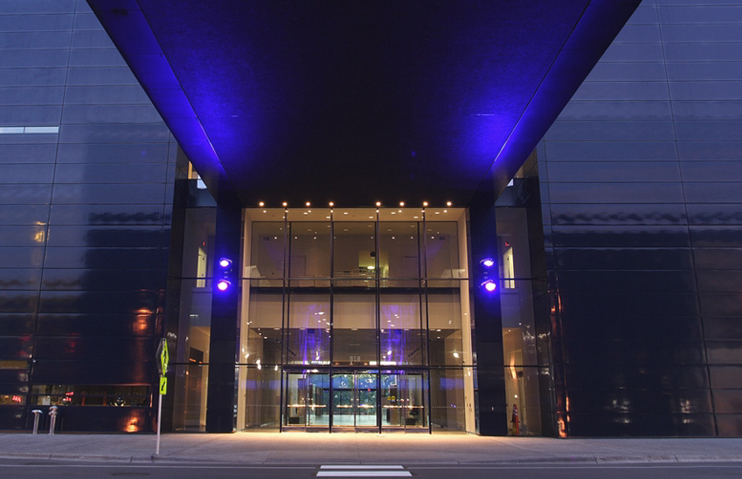 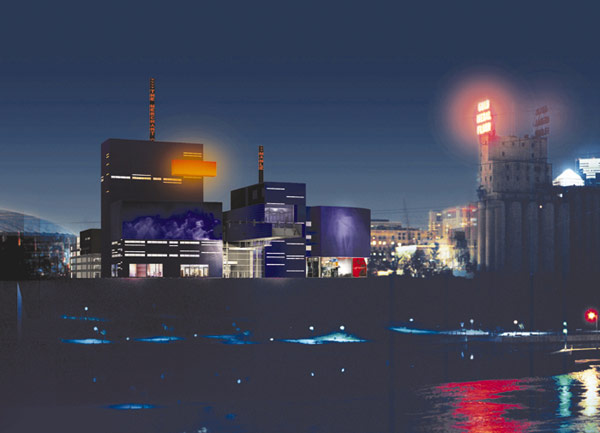 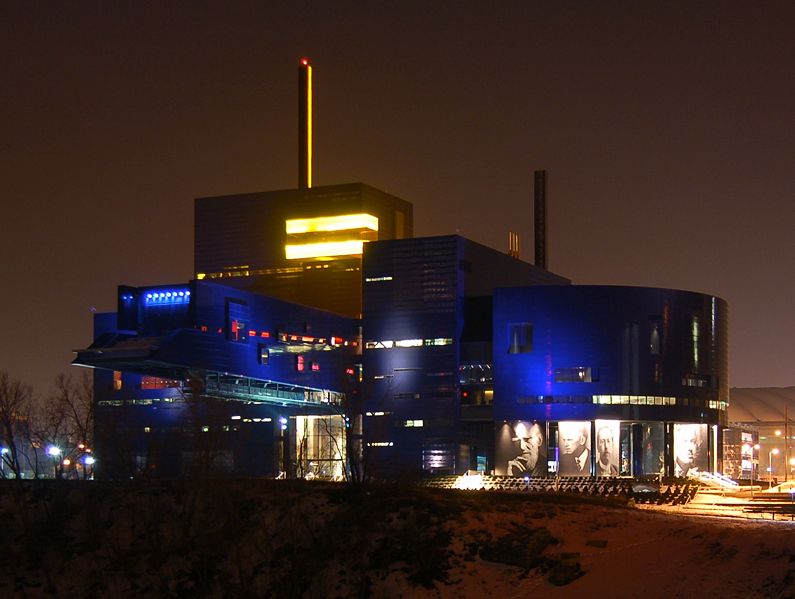 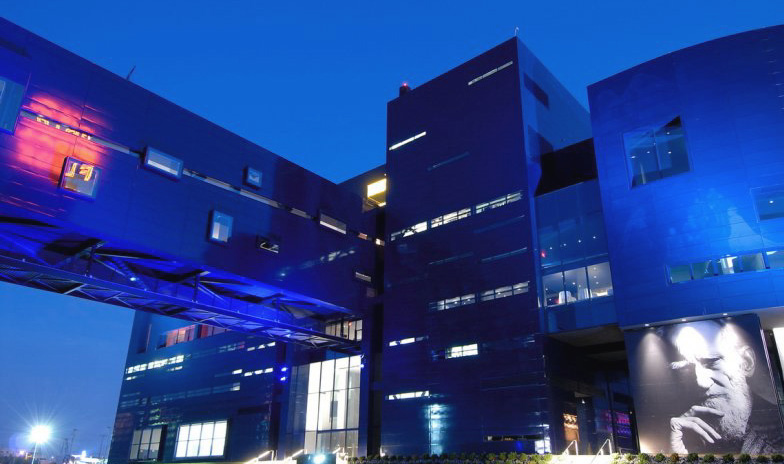 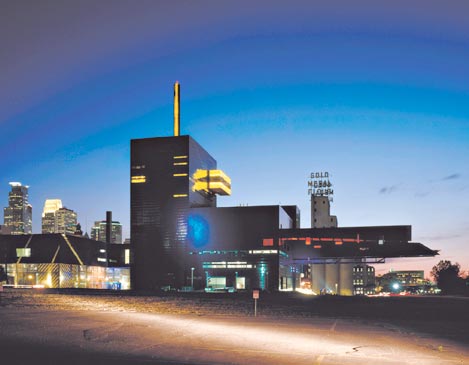 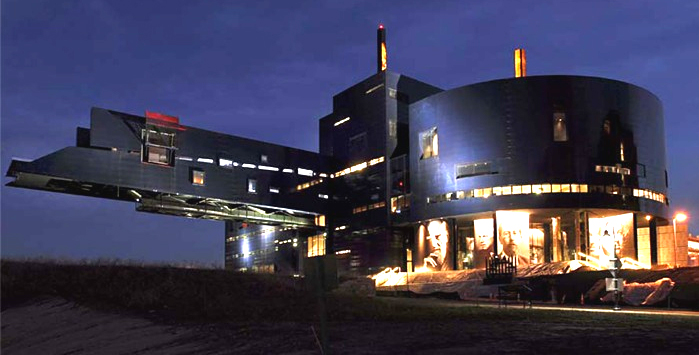 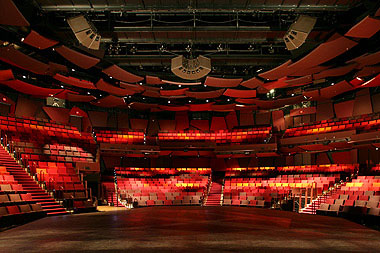 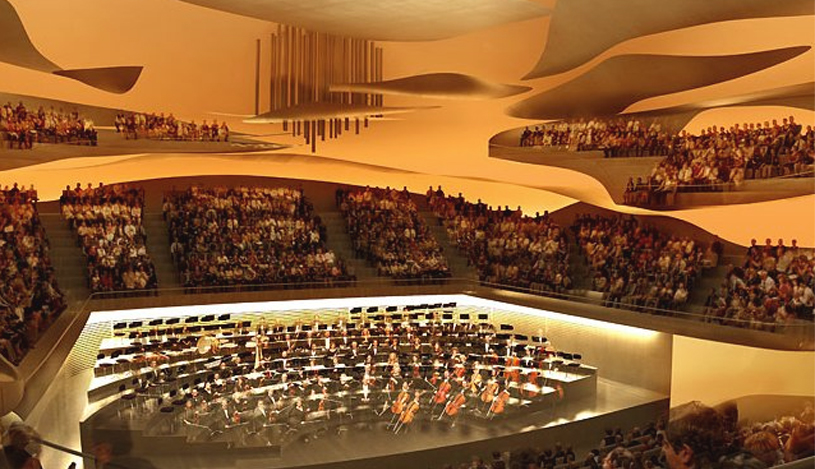 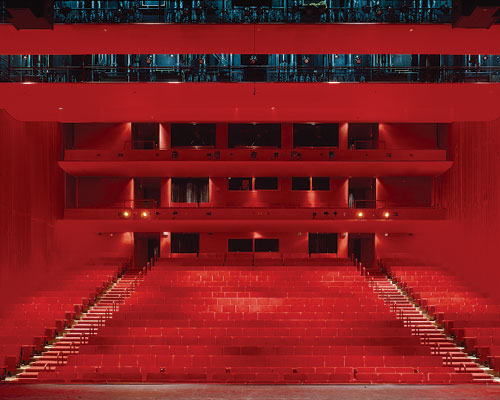 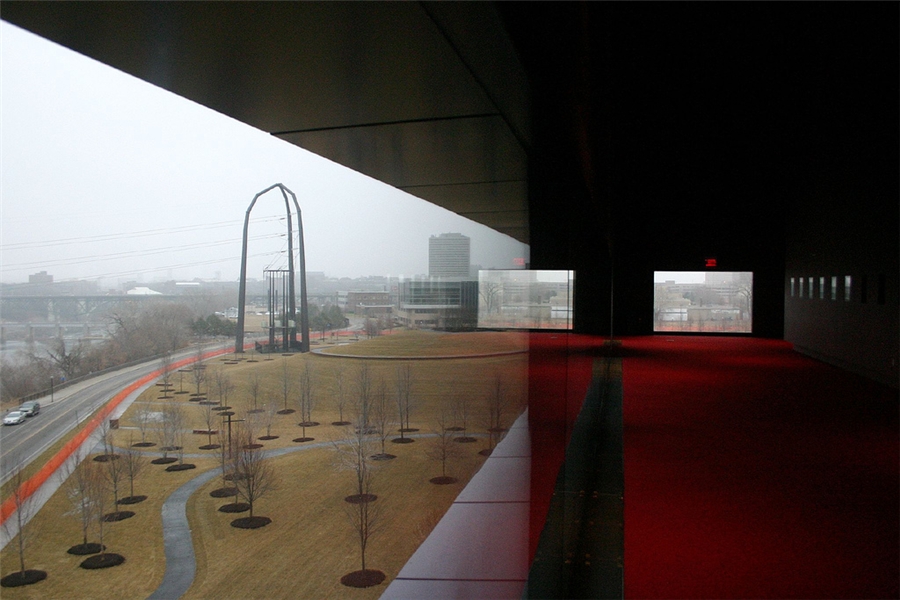 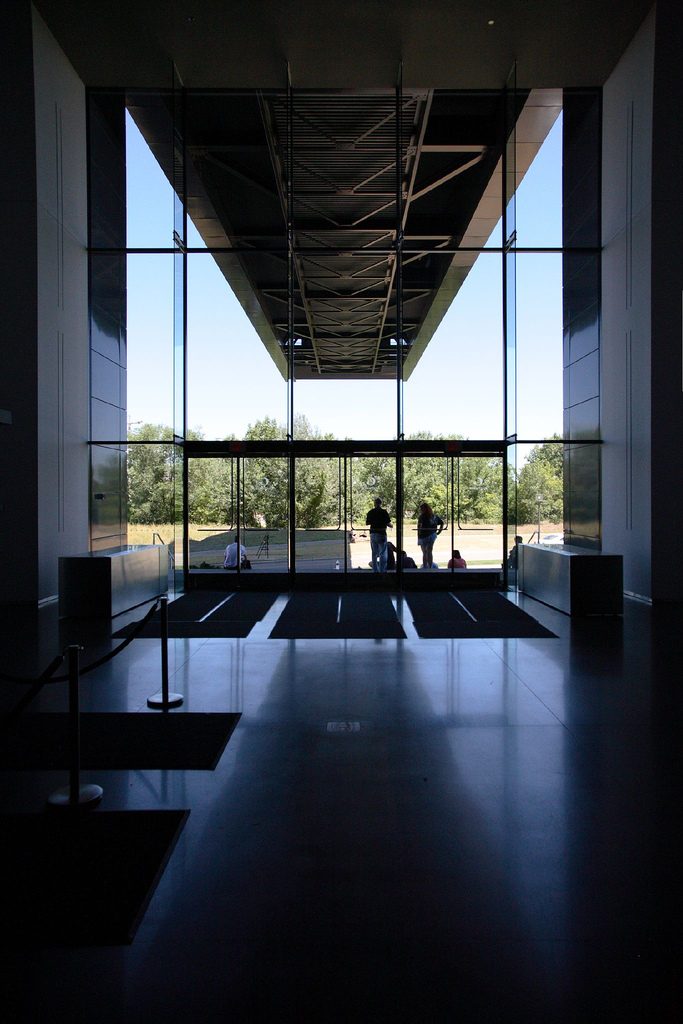 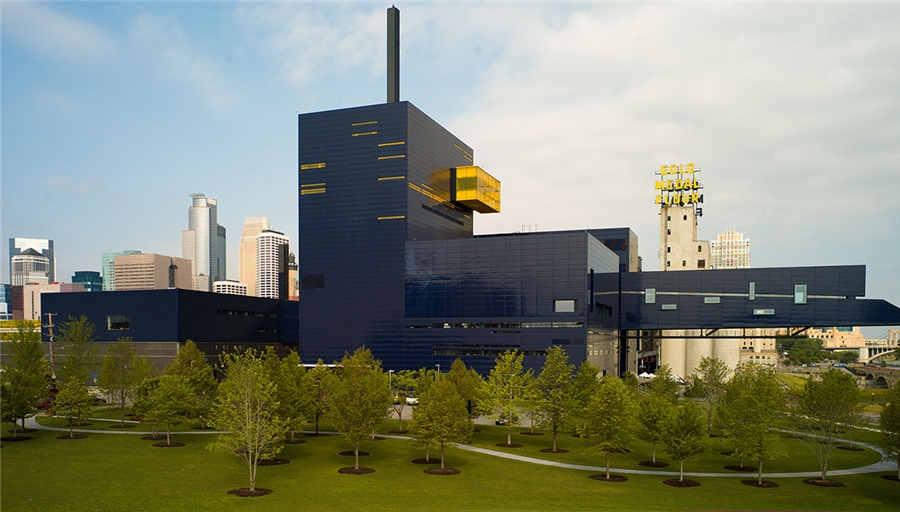