The Zaha Hadid project for the Guangzhou Opera House (GOH ), called “two stones” was the winner in the international competition that also participated Coop Himmelb(l)au and Rem Koolhaas.
The theater has become the largest center in this genus in southern China with the highest technology, being one of the three largest theaters in the nation with the National Center for the Performing Arts Beijing and Shanghai Grand Theatre. For its inauguration in May 2010, the American filmmaker Shahar Stroh led the first function with Puccini’s opera “Turandot,” a controversial work so far in the country.

The structure was designed by the Iraqi architect Zaha Hadid, its independent auditorium, of concrete, located within a bold exposed granite and glass, coated with a steel frame, needed over five years to build, and was praised following its initiation architecture critic Jonathan Glancey in the Guardian, who defined as “both, highly theatrical and insistently subtle”.

Based on professional operations and project management, GOH strives to position itself as an international cultural center in South China covering Macau,
Hong Kong and Taiwan, as well as a center cultural production in Asia, attracting artists and producers around the world. In the future, GOH help strengthen the cultural content for the Canton area and the cultural system reform in China by presenting diverse performing arts.

Architect Zaha Hadid gave shape to this structure so that resembled two stones on the bank of Pearl River. The design of the Opera House is a unique exploration of contextual urban relationships Zaha Hadid Architects, combining the cultural traditions that have shaped the history of Guangzhou, with the ambition and optimism that will create its future.

The design evolved from the concepts of a natural landscape and the fascinating interplay between architecture and nature, agreeing with the principles of erosion, geology and topography. The design of the Guangzhou Opera has been particularly influenced by river valleys and how they are transformed by erosion.

Fold lines in this landscape define territories and zones within the Opera House, both inside and outside dramatic canyons for circulation, lobbies and cafes are created, allowing natural light to penetrate deep into the building. Smooth transitions between disparate elements and different levels continue this landscape analogy. 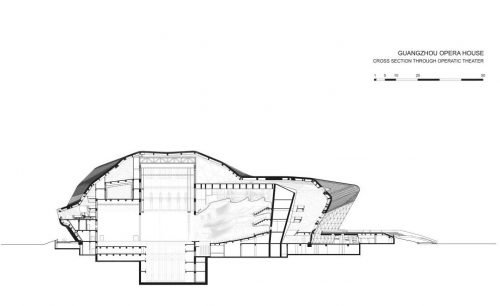 The complex of the Guangzhou Opera integrates a main room, smaller one, and numerous rehearsal spaces with a business district close to the city park.

From the park, visitors climb a ladder or follow a long ramp that diagonally past a small and secondary performance space before reaching a parking entrance, in front of the main hall. The contoured granite and glass forms create angles that jut out over the square.
The smallest room is highlighted as a dark rock retracted slightly back and to the right.

Surprising how all areas of the complex are connected. Escalators descend from both lobbies to a lower plaza, which eventually is lined with shops and a cafe. From there you can climb the spiral ramp to return to the main plaza, or walk around a body of water that extends into the park. The sequence of spaces ties the opera house with the surrounding park, taking advantage of what was hitherto underused space, making both the opera house and its surroundings in a public area, which is all not only of opera fans elite. 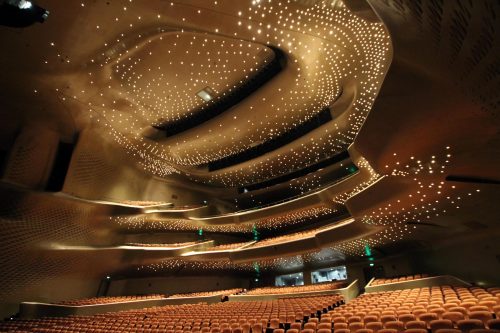 Designed by Australian acoustician Sir Harold Marshall, the “round” auditorium not only follows the asymmetric aerodynamic design of Zaha Hadid, it also makes a 1.6 second reverb and acoustic perfection equally receiving the 1,804 seats room, including 117 in the pit.
The seats are arranged in a slightly asymmetric pattern that surrounds the stage on three sides, with undulating balconies cascading down the front of the stage. The concave roof is crossed by thousands of small lights, so that when the main lights go out, before a performance, the feeling of being under the dome of a clear night sky is perceived.

The stage of the Opera Hall form the main space, the left wing, the right wing and the subsequent step, the whole set in a space of 74m long and 46m wide at most, with a 18mm wide proscenium and 12m high.

The engine room system includes 6 elevators theater, 6 cars in each of the wings, a turntable on the back step and lift orchestra pit in front of the proscenium. Among the main stage and the car in which lifts are located off elevators were installed help, plus another on the front and back, plus six below the rotary table.

There are two levels of terraces and one of them is a wooden sprung floor for ballet. The electronics include air strips for decoration, lights and electrical groups, the bandshell, fire curtains or a single point of cranes.

The lighting system in the Opera Room consists of light consoles, transmission networks, lighting fixtures, dimmers and cables. The sound system at the Salon Opera has features PA, double back and side fill.

The Experimental Theatre room is a space, a “black box ” which has 443 seats. It is rectangular, 18m wide and 26 m long, creating an interior that can be configured to function as a meeting room, theater push in terminal phase, arena theater, theater in the form of T, Black Box theater, and different varieties of performance space.

There are two ways of lifts within the scene, and the different forms of the stage may be conveniently interchanged. All seats are fixed in the car air bag along with the stage. The seating arrangement can be changed according to the needs of the different productions. There are 17 barriers to electric drive, 8 air Light Bars, 4 side and 8 single point motors. The sound system in the Experimental Theatre PA account with the system, and retractable side fill.
This “black box” is surrounded by an undulating white lobby.

On the outside 75,000 stone panels were used for coating combined with large windows and steel.

Continuing with the flow and architectural continuity language presented by the architect, the molded inside the main auditorium was performed with glass fiber reinforced gypsum. Plaster was also used to give life to the undulating forms of the lobby surrounding the smaller room.