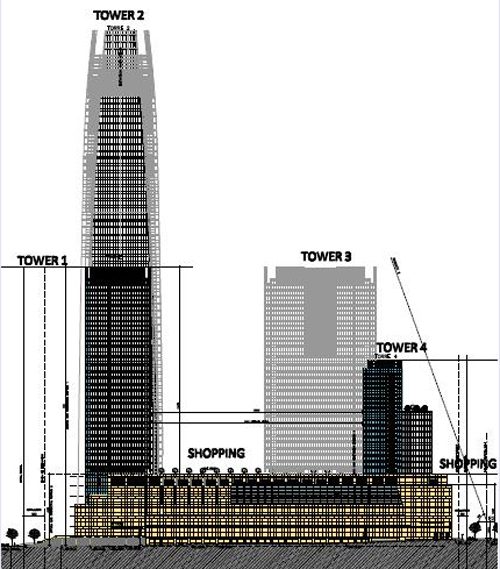 The Gran Torre Santiago, originally known as Torre Gran Costanera, part of the Costanera Center, a complex that aims to become a mini city, built in the 47.000m² of land available a mall and three towers which will be located primarily offices but also supermarkets, shops, restaurants, 2 five star hotels, parking, a helipad, a park in height, a medical center and leisure spaces.

The complex will be formed upon completion of four high-rise buildings and one lower, 6 floors, which houses the mall. The smaller towers with a height of 109m, two other towers will reach 160 and 165m respectively and the most notable element of the project, the Gran Torre Santiago, design architect César Pelli associated with the Chilean architects architects Alemparte Barreda and the Canadian firm Watt International, which reaches 300m and follows the line used by the architect in the design of the Crystal Tower and Shanghai IFC 2 Torres. This tower has become the highest in South America and second in the southern hemisphere behind the Q1 Tower in Australia, with its official opening planned, after numerous postponements, 2014 although the building was completed in 2013.

Santiago, also Santiago de Chile, is the capital of Chile, and the center of its largest conurbation. It lies in the country’s central valley, at an elevation of 520m above mean sea level.

To be seen in front of the mountains and become part of the city, the shape of the tower is simple and clear. Rising from the northwest corner of the complex, near the Mapocho River, the 64 floors of the coated glass tower has a slight taper, slim shape, culminating with a crown sculptural lattice. It is a strong form, able to become a reference point.

It is a building of the XXI century, both technically and aesthetically. It is designed with modern structural systems that line art construction and mechanical systems responsive to the environment. 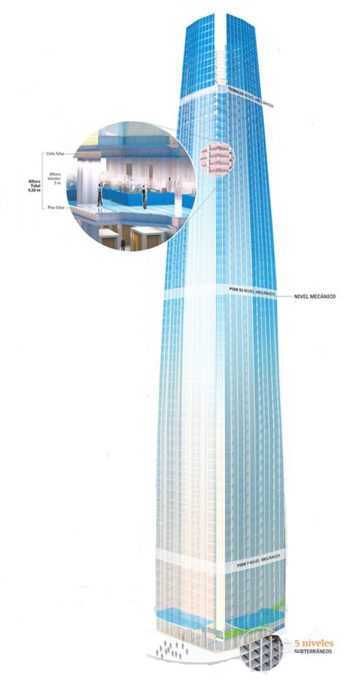 The “double -deck ” technology consists of two-story cabins that allow the transfer of as many passengers, running a single box and serving two floors at a time.

The building has 24 high-speed elevators that move at a speed of 6.6 meters per second, of which 19 double cabin passengers move to the first and second third of the building, three of these elevators begin their journey in the parking. Other 2 Single elevators lead to the upper floors, 3 are used as forklifts and use fire.

Plants dedicated to offices operate under a system of open spaces ranging in size from 100 to 2000m2. The offices have the highest international safety standards and infrastructure including thermal panels, anti UV and anti – impact glasses.

The floors 7, 51 and the terrace has been earmarked as mechanical levels, concentrating all the services to be provided to users, such as electrical systems, climate control, security, water and drainage among others. 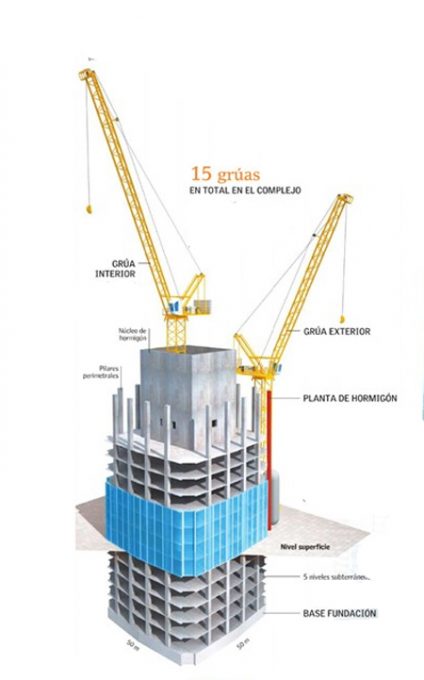 The Great Tower was built to withstand earthquakes. Chile, located in the Pacific Ring of Fire, is especially prone to powerful earthquakes. The building withstood successfully the 8.8 º Richter earthquake that devastated much of central and southern Chile in 2010, without structural damage. At the top of the tower, the wind speeds 122km/hora 35cm cause oscillatio. The rook moves in the opposite axis to the wind direction.

Inside develops a structural system embracing a heart open floor concrete slabs which are surrounded with pillars and perimeter of the building where services are concentrated. Its outer coating approaches are mainly composed of glass with high performance coatings that allow views without any obstacles from floor to ceiling, with intelligent solar shading and aluminum frames. Many features make the building be listed as “Green “, from the choice of materials, design exterior facade and mechanical and electrical systems.

Special multidirectional scaffolding platforms were set to work at height, covering gaps or areas to stack generating equipment, space platforms. Great heights tower system with T-60 were resolved, they structural beams supporting loads of slabs using BTM for the sector of the main tower and ORMA modulation system for walls.

The basis for the foundation of 50x50mm square and 3mm thick, is a 20m deep and was made with reinforced concrete weighs 20.000tn.

The main materials used in its construction are steel, glass, aluminum and concrete. Approximately 72,000 were needed cubic meters of concrete and 20,150 tons of steel for the large structure. 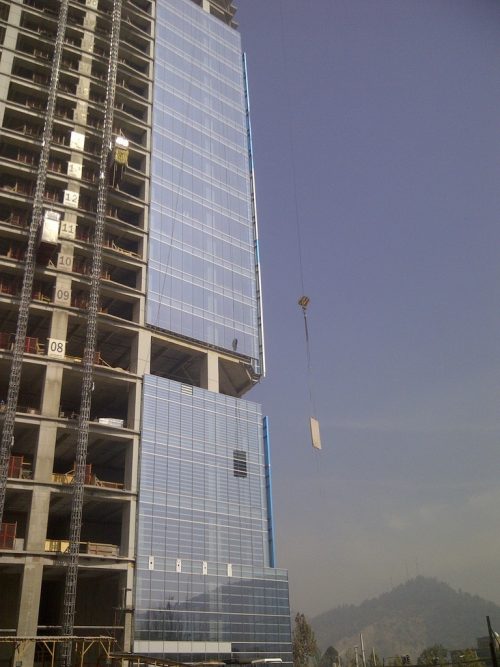 Was installed in-place concrete plant that produced 360m3 of concrete per day, lowering costs and avoiding the inconvenience caused in the streets Cuba trucks carrying the material. It is the first time that a 300m tall concrete is pumped through a pipe of diameter 25cm.

The 50.000m2 curtain wall that creates the skin overlying the Gran Torre Santiago, have high thermal efficiency due to its structure and inner insulating chamber, allowing greater transparency, natural light and electricity savings. In South America there is to date no company able to produce this amount of crystals, rectangular plates, 1.5 x 3.3m, so it was necessary to order them to China.

Several elements make the building a ” green building”, among them :