Both the Guild House and Gordon Wu Hall, Venturi presents an architecture that tries to accommodate pre-existing conditions, including historical details and explicit references, as the heraldic pattern on the entrance, key stones, Tudor-Gothic style windows or balls of stone pillars on the steps that define a set of paths through the Princeton campus.

The design for the new building of Butler College collects important signals of what is around you, while promoting its own identity. Its long shape and central location make it a visual link that connects and unites the existing buildings belonging to the bedrooms. Brick, finishing limestone and strips of windows attached to the entrance, which offset and side in the building set, is marked by a bold panel tops in black and white, reminiscent of Renaissance ornamental principles and symbolizes the entrance to the university as a whole, as well as the building itself. 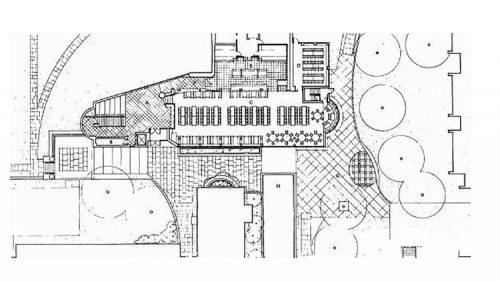 The site where the new building was built is irregular, steep and narrow. Other limitations include the proximity of the other buildings and the need for a new hall to share an existing kitchen adjacent to Wilson College, on the campus of Princeton University, New Jersey, United States.

Wu Hall parallel to a pedestrian modulates the slopes of the north-south axis with a series of ramps, steps, retaining walls and small cuts. The resulting areas of the provision of outdoor spaces created places for meetings and relaxation. At the southern end of the building the architects designed a small square, at the intersection of College Walk, one of the main pedestrian street of the campus, and Butler College Walk. Here College Walk expands to accommodate access to new bedrooms and safeguard the Butler Memorial that identifies and unites the three disparate buildings forming the Butler College. This provision in conjunction with the location of Wu Hall has given identity to the western end of College Walk.

Gordon Wu Hall is the centerpiece of Butler College, a dining room located between the brick dormitory buildings, which in turn was designed to identify residents College graduate of Princeton University. The project posed to the architects to design a building that will provide a new identity to the university and at the same time serve as a focal point for all of your social life by giving a sense of cohesion to existing facilities with disparate styles.
When Venturi designed the Gordon Wu Hall described it as “a visual script” that connects the existing adjacent bedrooms. 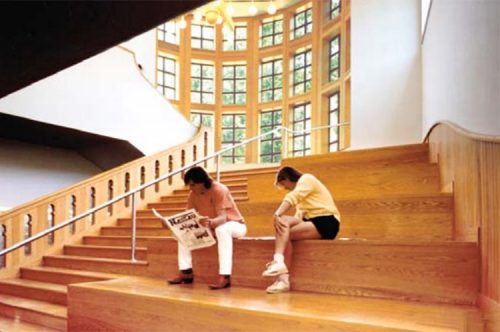 Inside the building was planned not only to create a series of spaces that accommodate social activities and dining for 500 students, but also to provide opportunities to socialize informally, intimate and spontaneous.

In the entrance hall, on the left, a staircase leads through a large window to a lounge, administrative offices and the library upstairs. The lounge and library each include large windows, visually expanding its relatively small spaces.
The first flight of stairs extends unexpectedly to one side forming large stands that allow sitting. The extension of the ladder suggests a “grand staircase” sweep up, but serves as an informal space for waiting or meeting. On special occasions it becomes an amphitheater. 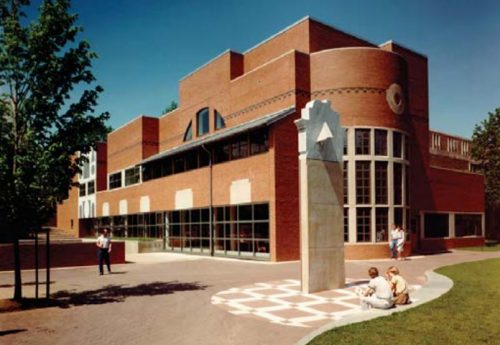 The long building room with high curved windows on two levels in each of its ends provides a sense of grandeur and recalls the Gothic dining Princeton, although low ceilings, large windows and wooden furniture create a new level of intimacy and comfort that allow the great hall becomes a pleasant place, an intimate mixture of coffee and a large living room.

The main facade of Wu Hall is a curious mix of elegance and sloppiness, is thin and tense, but excels and curves to suggest a forceful expression. It is perforated by horizontal windows bays flush with the surface of the building, a detail that lends elegance. The windows in turn are divided into smaller panels to appear old. The entrance doors are made of wood, as in the old school, but above them a pediment of white marble that occupies the entire height of the front exposes a pattern of circles, arcs and triangles in dark gray marble.

The own identity, but also shared with the existing facilities included in the construction walls of ocher brick, limestone trim and bay windows that stick to the traditional Gothic architecture from Princeton. Ornamentations have been made with white marble, black and gray.

The building is fully accessible to people with disabilities.