In 1929 the young architect Luis Barragan is commissioned to make a house on the outskirts of Guadalajara to a prominent member of the local society, Efraín González Luna, ideologue, politician and intellectual who together with his family lived there until the date of his death in 1964. The project presented by Barragán responding to the characteristics that would accompany him in his work, a mixture of architecture and art, where the use of light and indoors play with color, intimacy and materials typical of the region, emphasized by a time in which was praised and defended the native Mexico, the called “regionalism”. His atypical composition within the environment of the “Guadalajara Colony” and its peculiar construction has made it an architectural landmark of the twentieth century.

In late 1930 the homeowner hired architect Ignacio Díaz Morales for extension housing. On its south side was added, on the ground floor, a wing with three bedrooms, one aimed at music room, the other two bedrooms, one bathroom was also added. Upstairs an annex was made to expand the existing library.

In 2001, the Institute of Technology and Higher Studies (ITESO) acquires and restores the house, establishing its headquarters in the place with the intention of preserving Barragán construction. It has been declared Artistic Monument by the Ministry of Public Education Mexico, in addition to receiving recognition by the National Institute of Fine Arts and the Culture of Jalisco as a Property of Significant Artistic Value. From that moment the house renamed ITESO Clavigero House in honor of the jesuit Francis Xavier Clavigero, scholar of modern philosophy and work with the Indians.

In what was the outskirts of the city of Guadalajara, Mexico, the house was it raised on a plot of 1750m2 on Calle del Bosque 2083, later called Calle José Guadalupe Zuno, bordering two plots on its east and west, with the Forest Av on the north and South Street on the opposite side.

The two sections of land overlooking the streets get narrower as they approach the limit, a situation exploited by Barragan creates two different access to housing, the main on the north side, on the Avenue, with pedestrian access and cars and on the south facade, a secondary access. Both entrances to the property there is a garden to cross before reaching the house.

Between 1920-1940 Mexico crossed an architectural time trying to get away from the Europeanized building models, mainly French, to regain the local models. This movement known as “regionalism” is manifested with Arabic influences blended with indigenous and Persians forms, it was no more than a fleeting movement that barely lasted 20 years, until Le Corbusier revolutionized the world with his new concept of architecture.

Within this time Luis Barragán projected González Luna House, with characteristic features of the regional architecture, arches and walls clean and robust, but as well with a new approach, a volumetric hitherto unseen in Mexican architecture. Barragan uses the space dedicated to the garden to create a universe on a human scale, whose harmonious sounds, foliage combined result of the use of sources, representing a whole, a move away from street noise and find calm in the path toward home.

The original house is distributed on two levels, the ground floor where the functions of life are developed and the upper floor where the large library of González Luna and the oratory is located, both surrounded by a large terrace which corresponds to the cover of the down floor. The house shares the bounty of the garden spaces.

With the extension by Díaz Morales added downstairs music room and two bedrooms on the upper level library and terrace expands.

Access to the property can be made by the broader north facade and bigger and with car access or by the south facade, only for pedestrians. The northern entrance is located on the right side of the property lattice, which also departs from the limits on its side on the west side creating a long road cars leading to the garage located under the service area to the east away from the boundary by a garden.

At the beginning of the road for cars, on the left, a paved surface a little higher than the level of the street acts as an intermediate space between public life and private garden that begins on the porch, allowing access to the social area or service area that has its own separate entrance.

The south entrance is through a small door, this time open on a wall. In both cases a garden with spaces sequence separates the house from the property boundary. At its southern façade, the main volume of the house is enhanced by the presence of a high porch accessed by a few steps and patio, including forming a square enclosure.

The construction follows a longitudinal axis which distributes the spaces from the main entrance to the second one, across the yard and porch to get lost in the later source. The porches are semi house with arches.

From the north entrance after passing through the porch, a small vestibule gives access to a living room and along the axis marked are distributed to the left and garden view bedrooms communicating with each other to facilitate the use of space. Westward the dining room, kitchen and utility area with access to rear patio.

The block added by Diaz Morales generates a secondary transverse axis in the southern area of the home, creating a new corridor on which the new spaces are distributed, taking into account the existing proportions with which it forms an “L”.

Upstairs the longitudinal axis is marked by the pergola shading the library and serves as a connector between the inside and the outside. At this level Barragan placed the library and the chapel. Diaz Morales expanded the rooms and the terrace but in turn obstructed added with the new block of the view that allowed the pergola.

The internal connection between the two levels is via a ladder placed in the northwest corner, is the vertical axis of the house and the highest level since the walls that surrounded the tower will form seen from the main entrance. The exterior is juxtaposed on the main facade another ladder that allows independent access to the upper floor.

The two plants are formed by staggered blocks created from the different heights of the house as the walls of the living room downstairs that retract following the path of the library above them or ceiling lowest bath and WC on the upper floor, lower height spaces to enable the creation of high windows in the living room. The service area is raised to accommodate the garage.

The thick walls of loading are pierced by windows of different formats, square in the stair tower, rectangular in the living room, the latter no view serving only to let the light to be on the top of the wall, a skylight in the corridor, latticed windows, other semicircular, all combined to penetrate light differently depending on the environment.

To build the solid González Luna House, Barragán resorted to using local materials, walls of adobe, stone, mosaic floors and dark wood, lime paints and “perón brick” widely used in the exterior for its hardness. Barragán plays with light, space, wind and water elements that characterize all his architectural work.

The walls were painted in neutral colors, reserving the use of colors to the details, like the tops of walls, railings or benches. The roof was covered with tiles, the doors were made in dark, solid wood the main entrance with metal wall panels and translucent stripes and which goes to the backyard. The pergola on the upper deck was constructed with profiled wood slats rest on masonry columns.

The floors were covered with different types of ceramics, decorated sometimes, one color indoors. 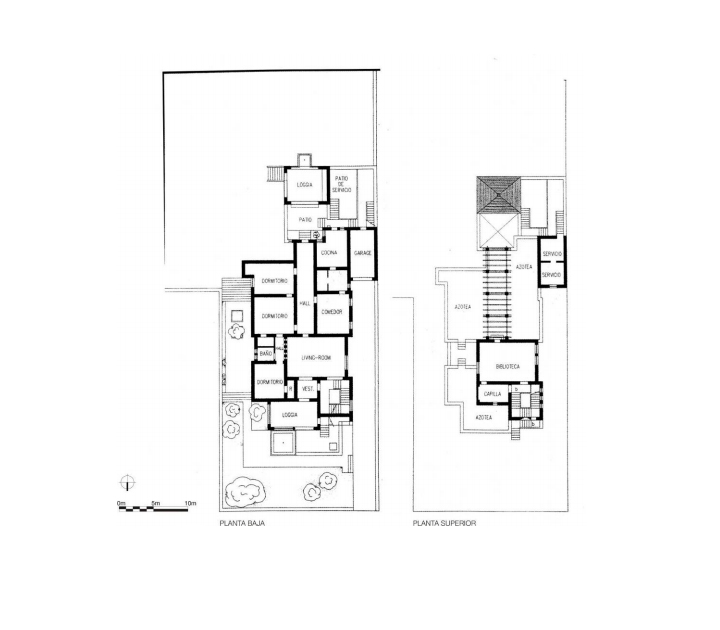 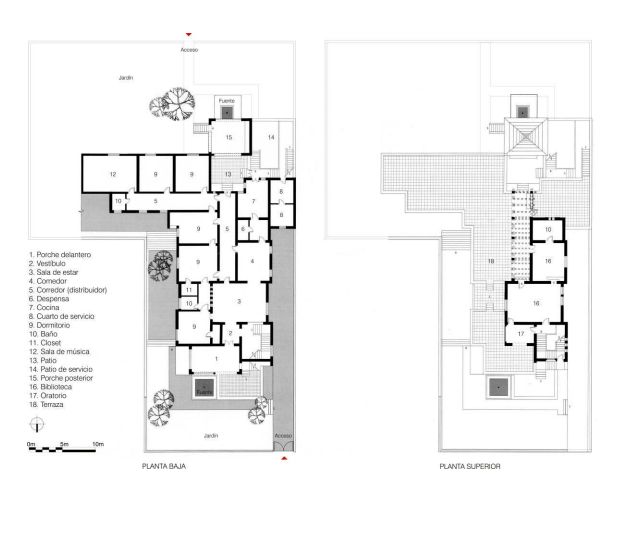 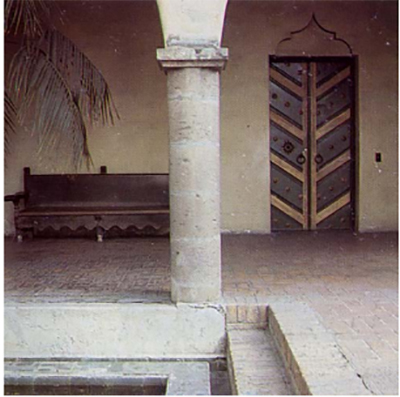 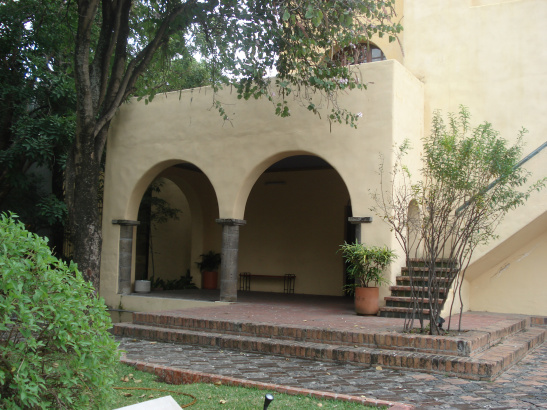 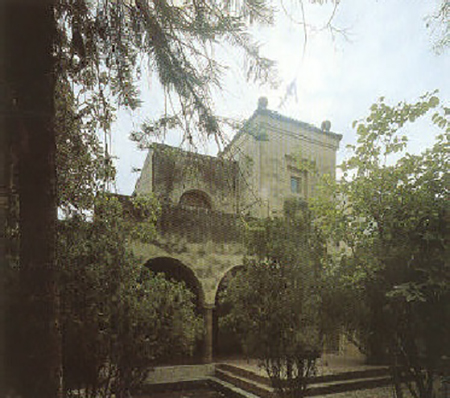 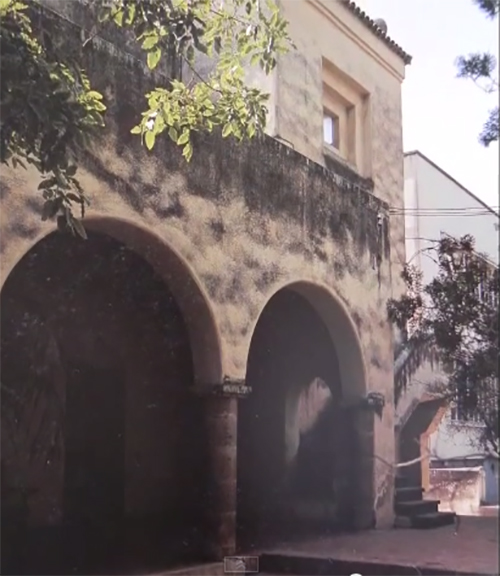 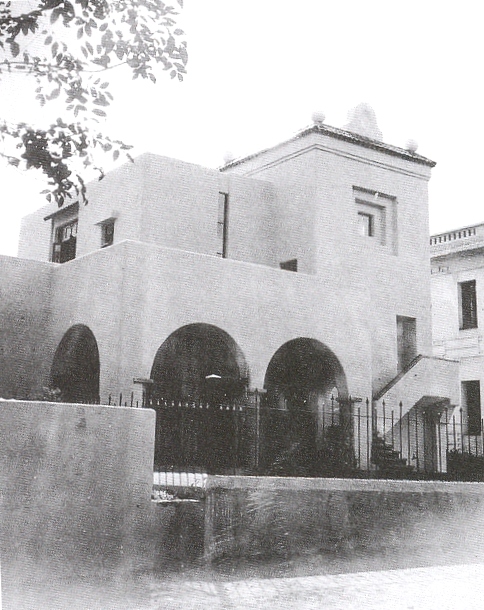 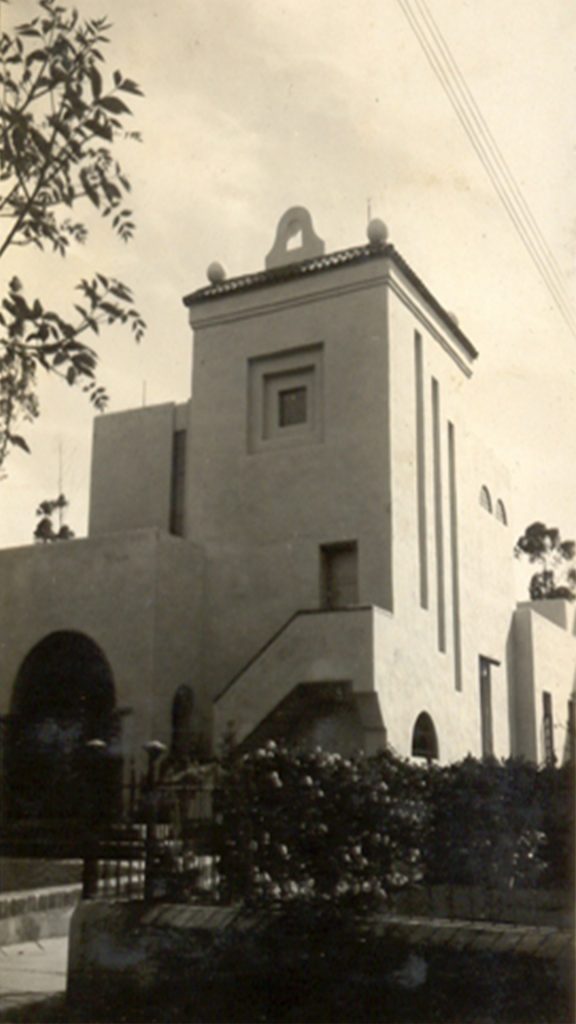 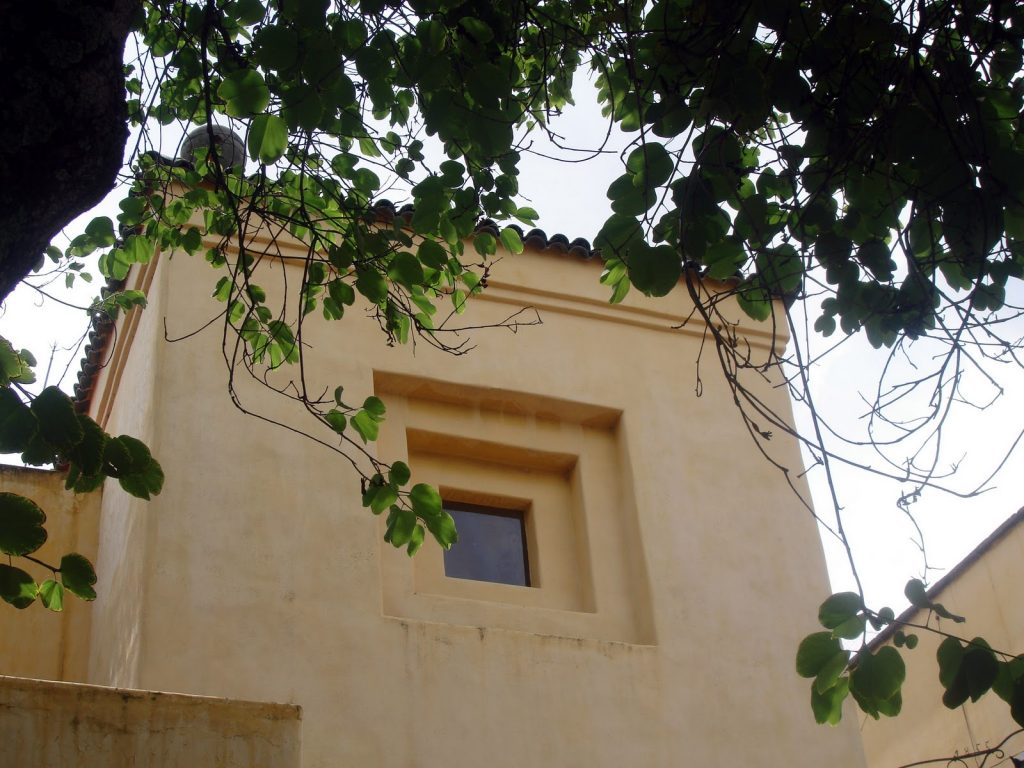 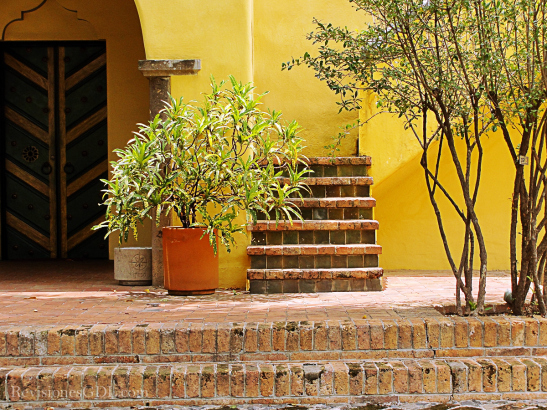 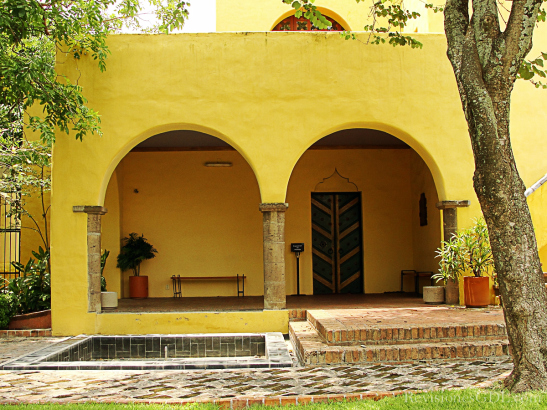 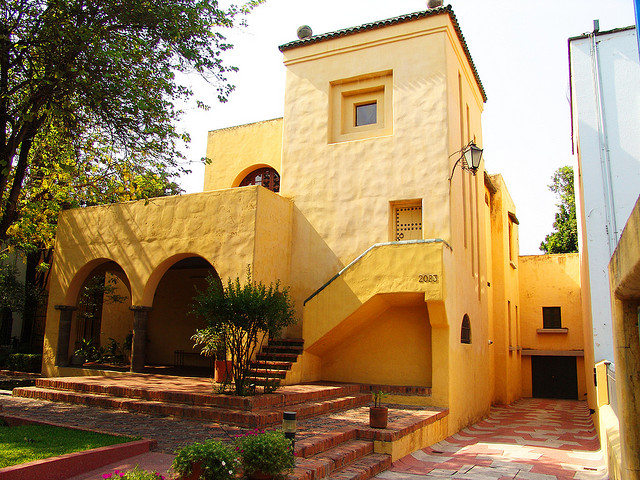 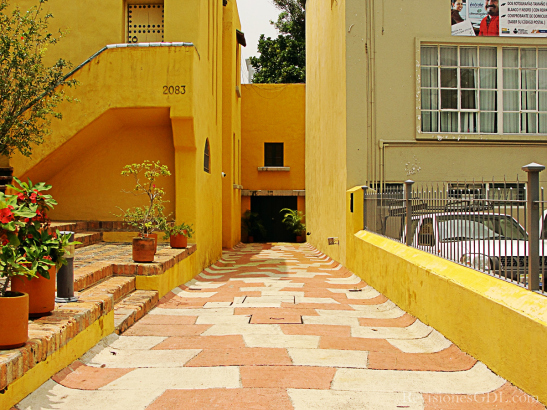 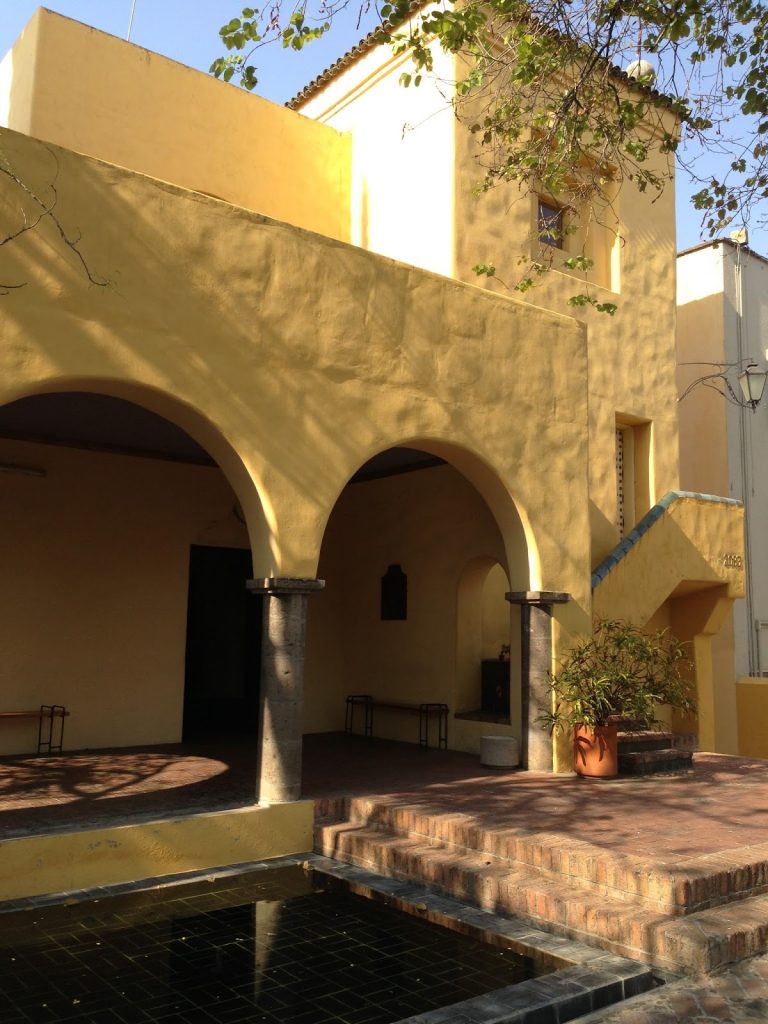 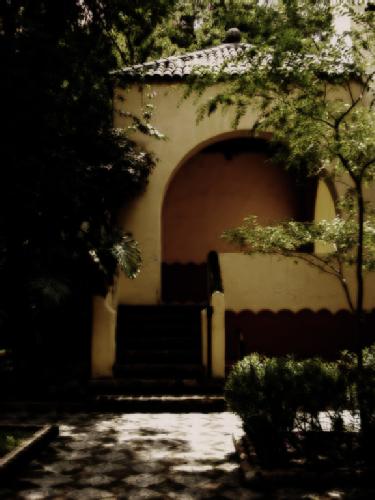 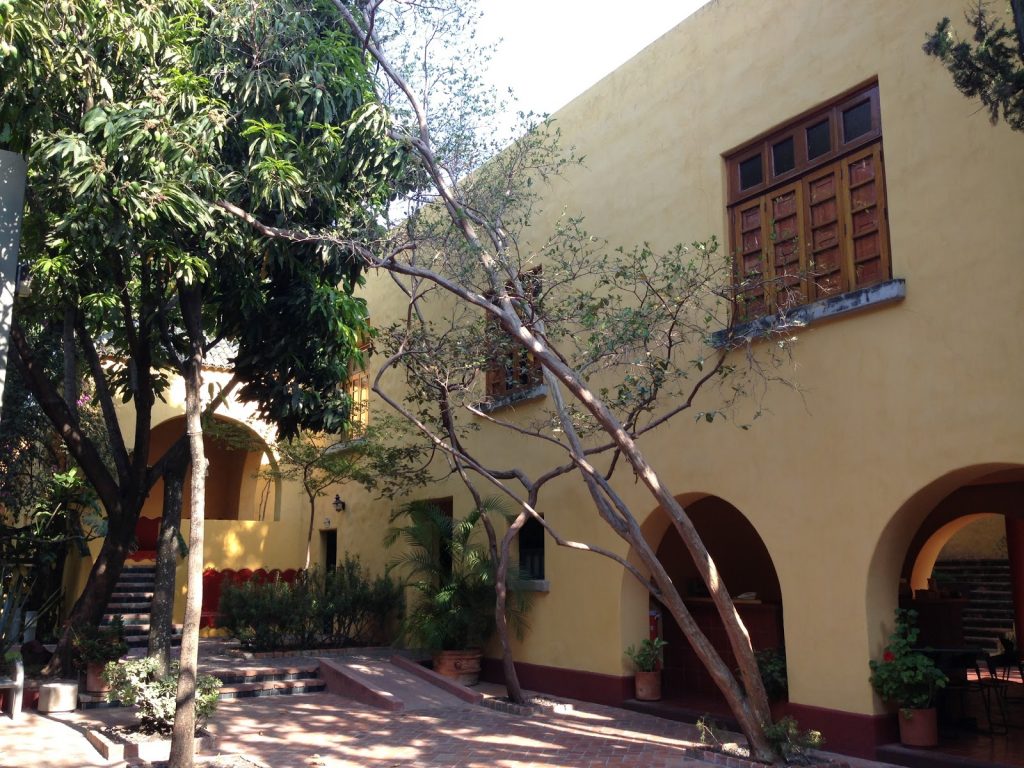 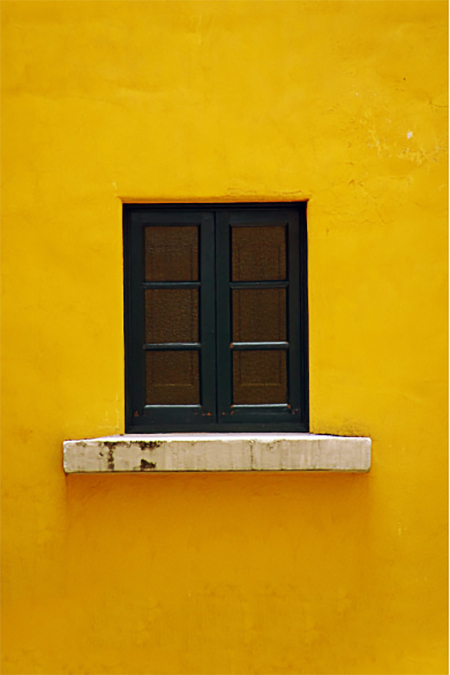 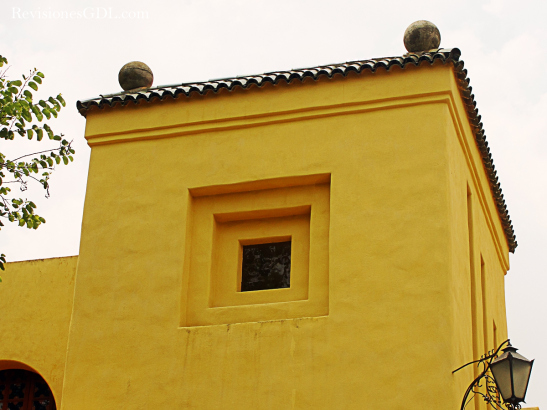 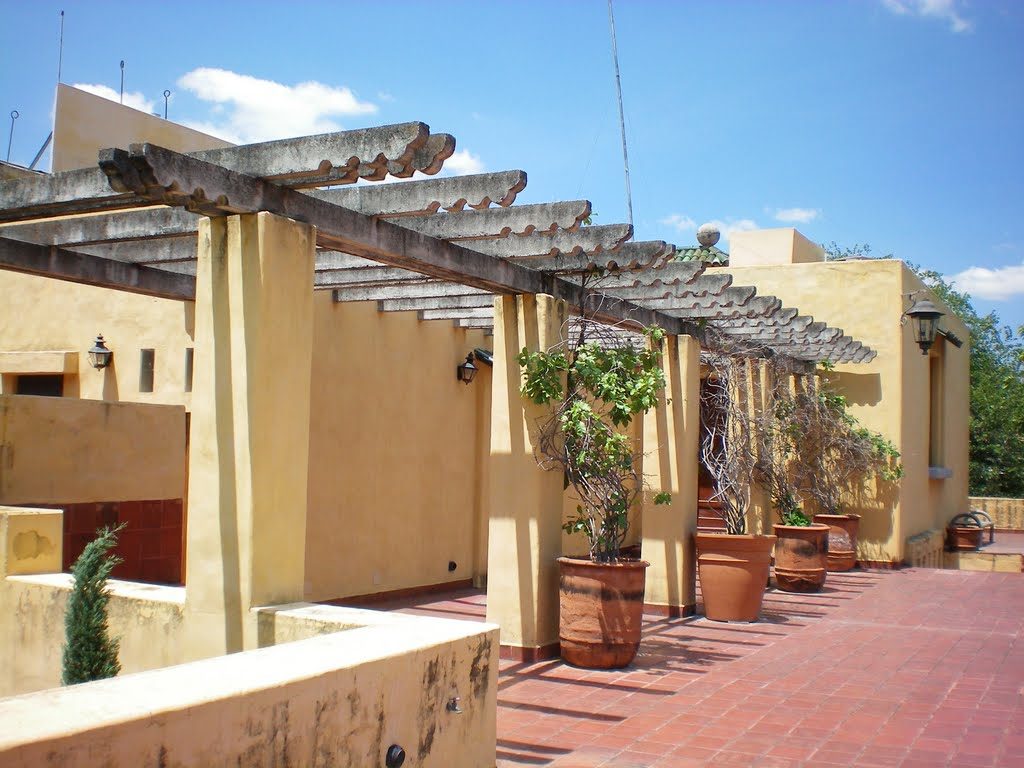 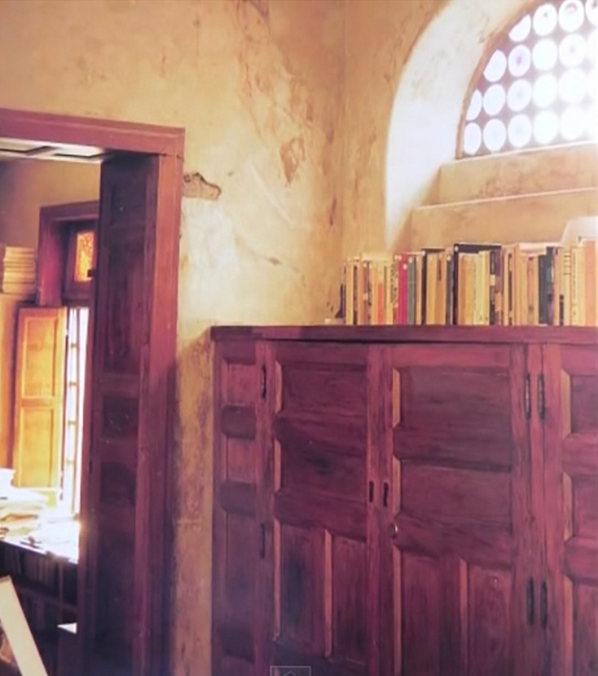 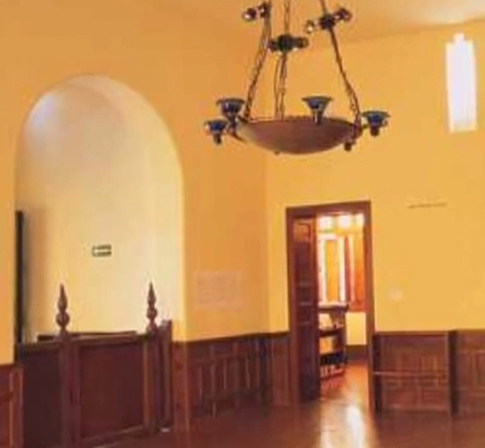 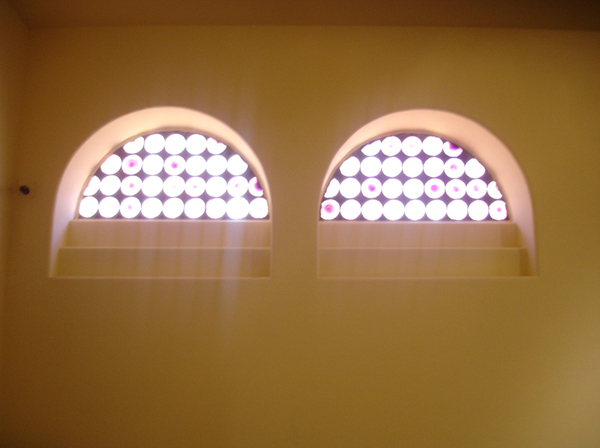