The project consists of the construction of the new regional headquarters of Deutsche Bundesbank in Chemnitz, formerly Karl Marx Stadt, in a place with a rich history and traumatic.
The proposal addresses the issue of permanence and solidity (the feeling that it is necessary the first time, almost), and also the nature understood in a paleontological as petrification and crystalline solidification of organic matter.

“Our project for the Bank arises Chemnitz strategic thinking purely cultural and intellectual. How can you build a building that is emblematic of capitalism in the former home of the city workers’movement, exKarl Marx Stadt in the GDR? What are the parameters to be used in a place that has seen the collapse of many things, including matters related to the modern movement of which I am clearly part? In response to these questions with a project design involves, among other things, a certain intellectual sophistication that is quite a good pure pragmatism or artistic craftsmanship “(” uncertainty, Culture and Professionalism: Reinventing Architecture Interview between Vittorio Magnago Lampugnani and Josep. Lluís Mateo “in Matthew Atlas, p.108, ACTAR, 1998, Barcelona).

We imagine the building as a fossil that reveals its previous organizational structure.
The transparent facade is an element that contributes to the construction of this idea.
The walls are built with taut wires at the top by means of springs. The cable tension varies according to weather conditions, which are controlled by the computer and made the appropriate adjustments. This means that the columns can be extremely thin, as they are constantly stressed.

The walls are complex laminated sheets formed by sheets of glass with a sheet located between them stone. This sheet rock was chosen because of its ability to respond to external conditions, with brands that come and go, giving an air inert organic determined.

These sheets of glass and fossils were tested in the laboratory to ensure it can withstand the temperature conditions and meet stringent security requirements. The leaves are attached to the structure using techniques typical of high-tech curtain wall. The strips laid between the sheets as a finishing touch, and all exterior elements are archaic bronze.

The structure was developed by Leonardt, Andrä und Partner in clever fashion: the facades of the two upper floors are walls that rely on communication routes.
Traction cables used to support the floor of the first floor, producing a floor that is free of all internal supports.

The facades are of local stone with a very accurate way to design: the wedges (cut one stone), the low base (with a more difficult, the rough stone), the first stones have a slightly different texture.

A tension provides the methodology craft operating strategy throughout the project.

The translucent facade consists of a complex system of glass sheets, insulation airspace and thick alabaster.
Construction was a great adventure and still unfinished, but, among other things, is what architects are for: give formless solid ideas, material form.

In some places it seems that solidified water (ice), in other veins inside the material patterns of plant form.

The windows are very sophisticated:
bronze and wood. Downstairs, a large bronze wall socket at all openings.
This was built in the toughest of frames, diabolical in its perfection, which makes unique and eternal.
The interiors of the entrance hall, the most monumental and the public part of the building are covered with stones and pieces of trees.

P. Czech Kvicala artist who has painted the large roof.
One of the things about him that I find interesting is how it works: hand painting a ceiling of more than 200 m², is part of the logic of the building ahistorical.

The garden is very simple: the hard pavement markings walkways and the rest is just gravel or small beds of shrubs and bedding plants, to be selected by prehistoric species.

” Being invited to participate in the competition to design the new headquarters of the Bundesbank, in late August 1996 trip from Palma de Mallorca to Dresden.
No, I took a train to Chemnitz and later in Leipzig, where he returned to Palma. These were the first charter flights to the Mediterranean paradise legendary, recently opened to the citizens of the former East Germany.”

This trip was crucial in defining project ideas, which took us through the long adventure of its construction.

As a traveler accidental remote world, looked at me and tried to understand. But I was looking for a project.

” I was in a place that had once been the center of Europe, the center of my culture. Weimar, Goethe, Bach, industrialization, Hellerau… as did all the previous reduction regime had been unable to modernize, thus revealing, in some places, direct contemplation.
It was not material that could be used, but imposed a degree of intellectual sophistication that could be applied to the case in hand. It was not just functional and technocratic problem dealing, was cultural, too.
Seeing the brutal rise of the ongoing reconstruction only serves to point out this argument.”

The rest of the adventure of the whole modern movement also appeared in the GDR buildings, especially those built in the early days, when it was still possible to believe in building a new world.

” Having trained with the architecture of the 1950s as a reference, this scene sometimes dramatically modernity built was also part of the family for me. What interested me particularly was the tension, so present in modern Germany at the time, a combination of rigor, repetition, technique and expressive intent.
Formalization Brazilian baroque architecture agitprop talking.
The shopping centers of Dresden and Leipzig, Chemnitz Cultural Center, with its voluptuous and statuesque manufactured homes, and the city center of Chemnitz itself, with its bas-reliefs of the Communist Manifesto, the big pile that was the bronze bust of Karl Marx ( that for a time he lent his name to the city) and the wake, like the Stations of the Cross, represented the relentless rise of the working class.”
Despite my sympathy for these objects – some of the highest quality – they were clearly the expression of a world that was over, dead. The project is not there.

” The place where we were going to build a big impression on me.
It was in a park with a beautiful and, for me, deeply felt name: Park of the Victims of Fascism.”

” But to call a park does not do justice to the place. No space is typical, pleasant urban nature more or less tamed and playing children – is a wild forest, with large trees even in the summer to block sunlight from the ground.
Marked by minimal intervention, full of mystery and characteristics referring to the dramatic history of Europe: a French patrol who fell in the Napoleonic wars, its ivy-covered mounds and arranged in strict hierarchical order, left half a cenotaph for the fallen in WWII…”

” Adolf Loos defended the tomb as the highest form of expression of architecture.
The mounds were a sign, then. And the big trees were an actual reference. Seen as the buildings were spectacular, with its roots (underground parts into the ground), large trunks and crowns.”

” As if guided directly by a mysterious force, immediately met another interesting point: City Museum of Paleontology. In the surrounding area, like an ad, a series of fossilized trees announced its contents.
The design of the museum can not have changed much since the 19th century, there was encyclopedic logic rationalist tradition of Humboldt and explains the alchemical transformation that leads to life, organic matter to the condition of a fossil inert inorganic. His splendid catalog, full of artistic images with great potential, has been with us over the years since.”

Our fate was sealed: they had to design a building that was like a tree, but the tree was fossilized sunk into the ground, anchoring it (traditionally hidden safes were on earth), which varied in shape relative to the heaven and the hardness of the stone is a counterpoint inorganic in the occasional appearance of an ancient solidified plant structure (onyx and alabaster immediately set as possibilities).

In German, the terms for construction (Bau) and tree (Baum) come from the same root. We had too many signs of not following them. 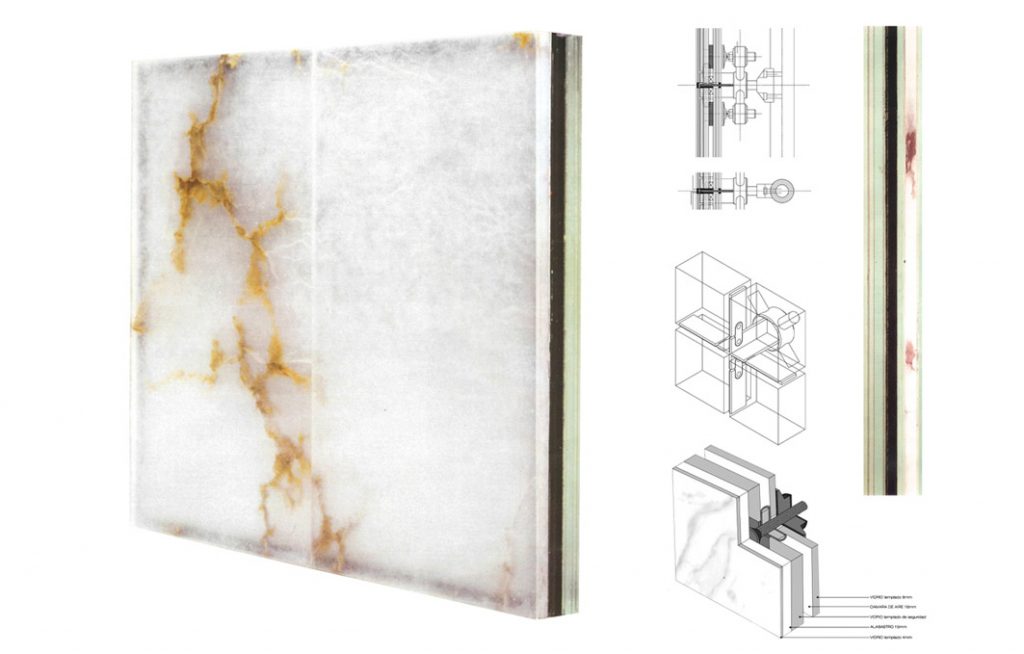 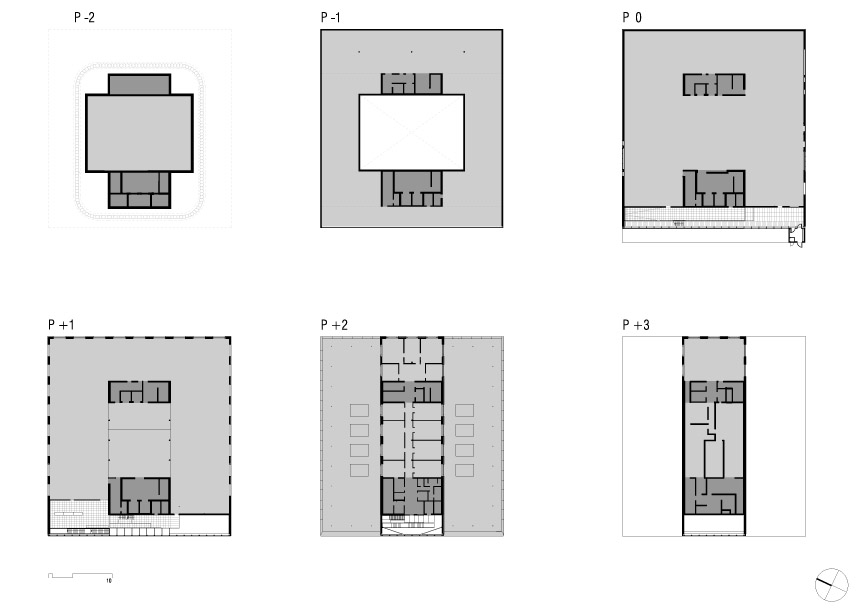 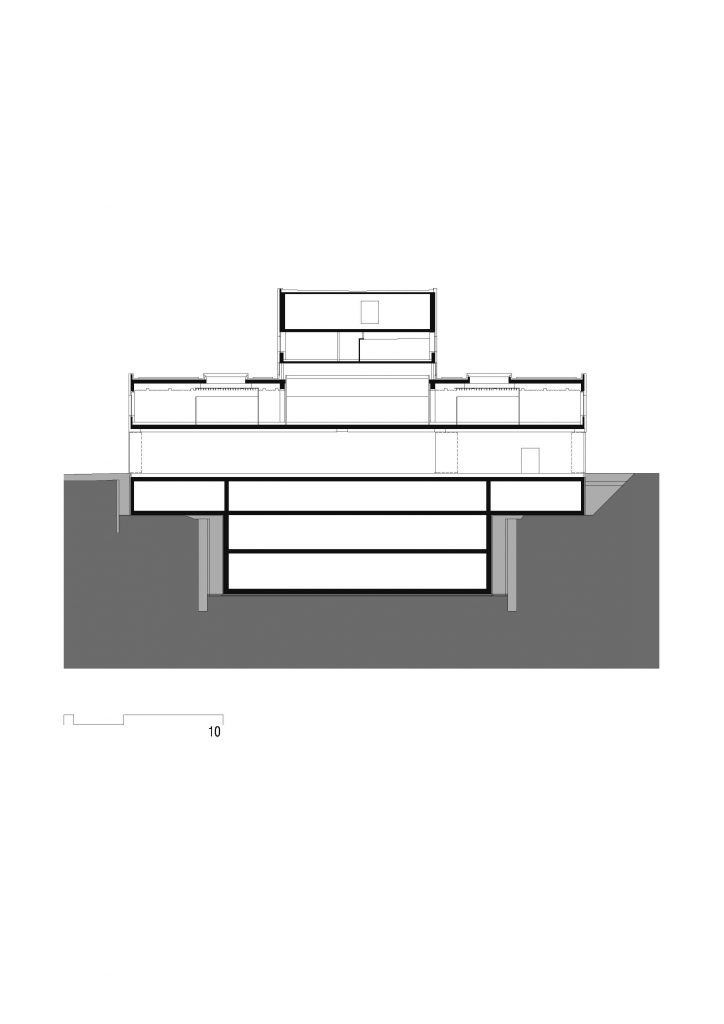 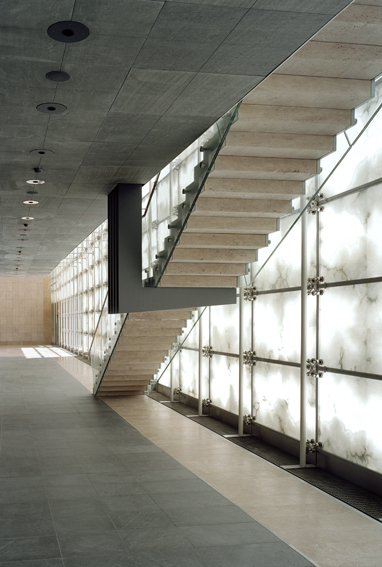 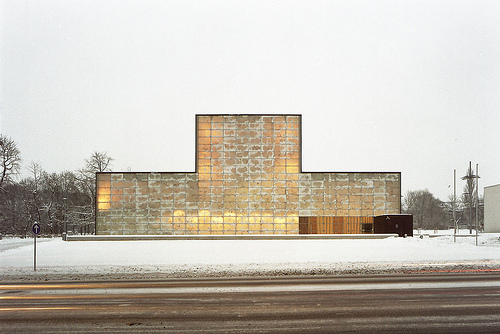 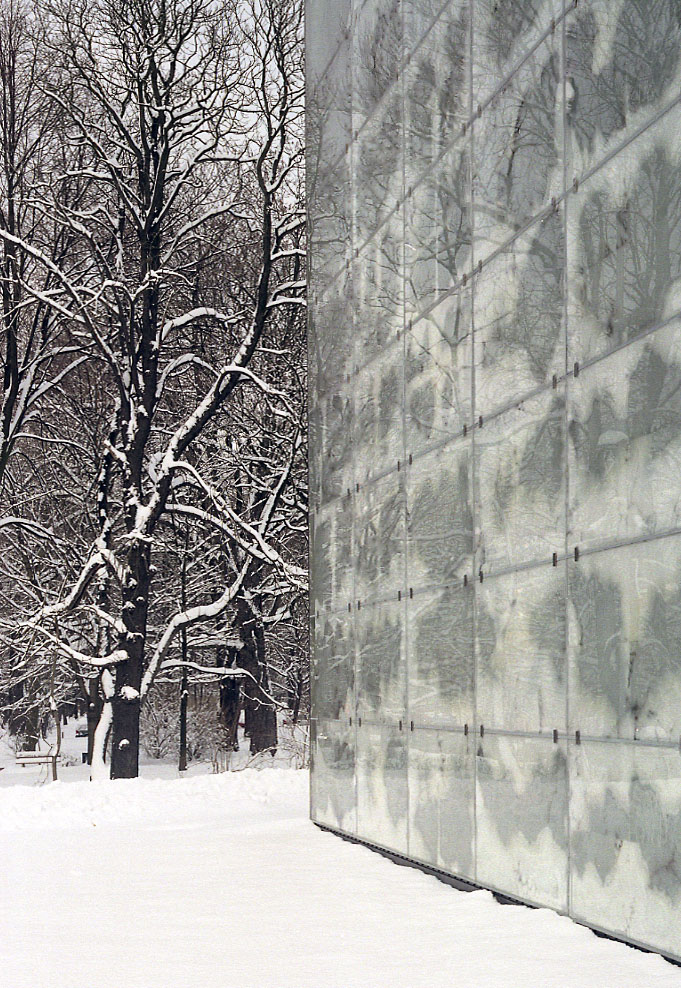 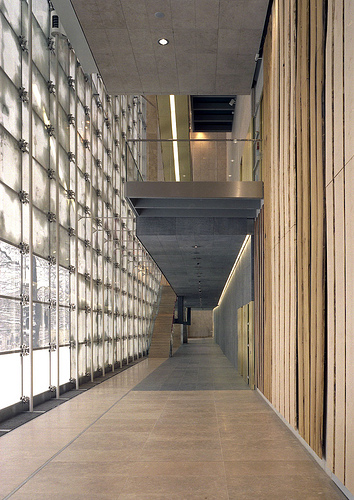 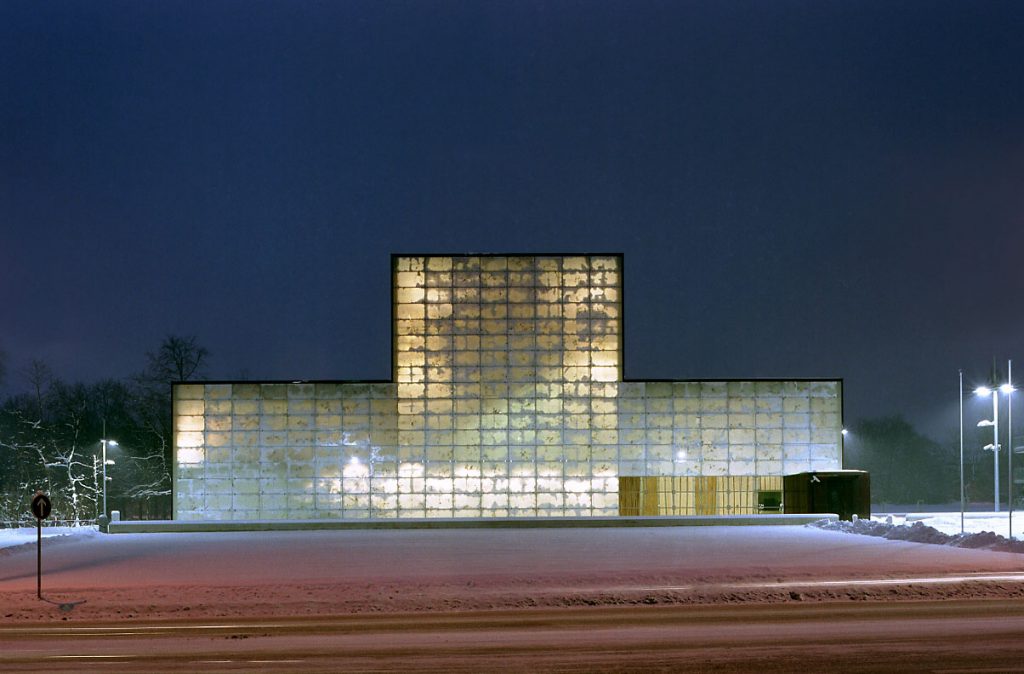 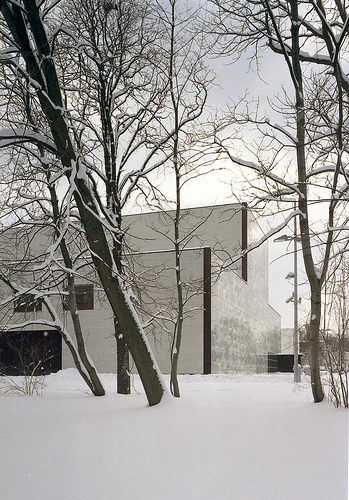