The General Electric Building was originally designed and built for the RCA-Victor Corporation in order to project an image of great visibility for the company, which, at the end of 1920 was at the forefront of the radio industry and communications. Architects John Walter Cross and Eliot Cross of Cross & Cross, designed the building in a Gothic style of Art Deco, representative of both the tenant originally planned as the power and the development of modern radio.

Originally built for RCA Victor, he became part of the General Electric when the first was offered to move to Rockefeller Center and place your name on the famous Plaza 30.

When in 1931 the architectural Cross & Cross was commissioned to design the headquarters of General Electric, they have asked that the design was in keeping with the church next door, St. Barthelemy, which was not an easy task, but once completed received a unanimous favorable review from both the media and the general public.

The colors chosen for the building were both integrated to provide contrast with the painted dome of the church. General Electric building is not merely a backdrop of the temple, is a work of art in its own right. Since its lobby with chrome and colored to radio waves represented in its crown, marble plaques building represents one of the best examples of Art Deco design in the world.

The headquarters of General Electric occupied the building for three decades until, in 1974, the company moved to Fairfield, Connecticut. The difficult economic situation and caused aging skyscraper that the firm could not rent office space. In 1993 the building had only one third of occupation and did not generate sufficient income to cover costs. The company donated the building to the University of Columbia to benefit from a tax deduction of $ 40 million.
University wanting not cope alone with the economic burden represented restoration partnered with Quantum Realty Partners and Mendik Company to convert the building into a profitable property. WCA Architects Design Group were responsible for upgrading the building, restoring the lobby and the exterior façade of the first three floors.
The General Electric Building is registered in the National Register of Historic Places since January 28, 2004. 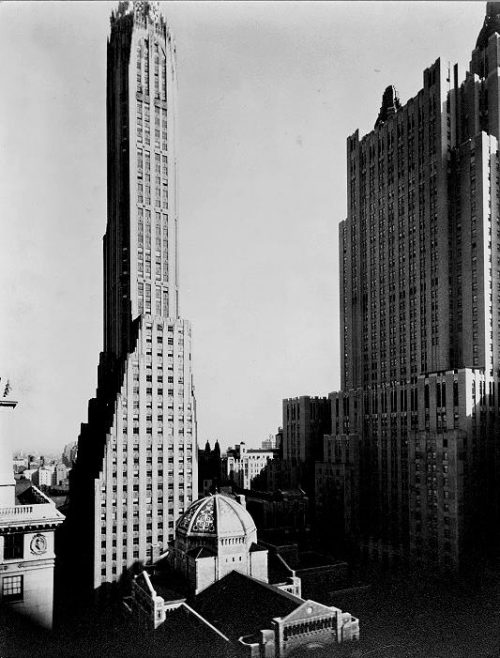 When the RCA acquired the property, the block was dominated by Renaissance buildings, including the church of the Byzantine-Romanesque style of St. Bartholomew to the west and the Cathedral High School academic Gothic south.

It required a great effort from the architects that the new design aesthetic is compatible with existing adjacent buildings. Although the building of General Electric rises dramatically above the church of St. Bartholomew, the use of ornaments Gothic-inspired colors with compatible materials and prevents the building visually dominate the church is seen as a contribution to the whole context. 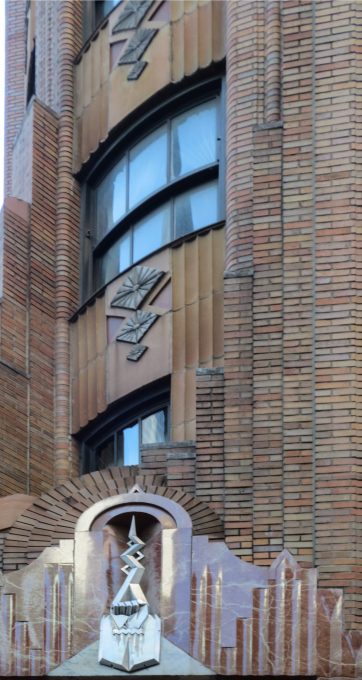 The most striking feature of this building is 196m tall extravagant coronation, a curious mixture of Gothic spiers of limestone with brick undulations and filigree ornaments in the shape of rays that represent the power of radio transmission waves sent by the Radio Corporation of America. At night, this “crown” is illuminated from the inside, so the superior appearance resembles a giant torch and makes the building one of the most unique city skyscrapers.
A few blocks south, the Chrysler Building also represents a wonderful example of a pure Art Deco style, but the General Electric Building is a much more elaborate and thematically more consistent with the role played by its main tenant sculpture.

The RCA building exemplifies the characteristics of the innovative adaptation of traditional Art Deco motifs to modern forms. Building the main objective was to express through architecture the power of radio and the importance of the RCA-Victor company as a corporate entity.

On the exterior walls waves, lightning and faces of the “electrical minds” project outwardly joining the exterior trim to transmit this symbolism directly. This representation of the client through the architectural ornament became a signature for the study Cross & Cross which was improved through a variety of stylistic other projects languages, but none was more expertly executed the building of General Electric.

The project design combines the high vertical with decorative complexity of the Art Deco style. The search for ornamental symbolism was part of the wider search for a new modern symbolic architectural language. The building is a sophisticated piece of urban infill that responds to the context of the adjacent building that evokes both the dynamic energy of electrical currents and radio transmissions. Since its chrome and marble lobby their radio waves in the corona, the General Electric Building articulates the symbolism and metaphor of advertising and design through its architecture. This is the best example of the firm iconographic Cross & Cross design and the Art Deco style of the best expressions of the city of New York.

Topped with a crown of needles, this Art Deco skyscraper is decorated with diagonal and zigzag designs that evoke associations with electricity. Its brick veneer with glazed terra cotta ornaments mixed with the materials of the adjacent church of St. Bartholomew. With much of its base hidden behind the church is a rare example of a friendly contextual juxtaposition of two buildings of different scale, type and age.

By the standards of today, the lobby is unrelated to the proverbial tower that crowns the building is a small, quiet space that once was innovative in its attempt to break new ground. 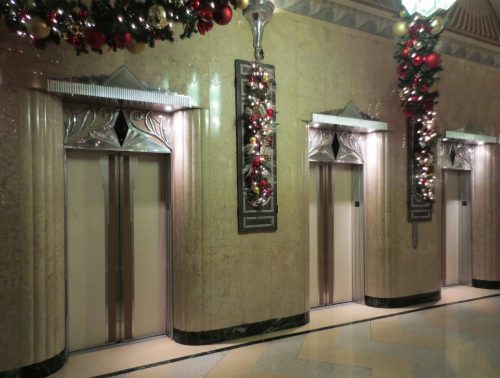 The entrance hall has a vaulted ceiling, aluminum plated sunburst motifs and light pink marble walls. Accessories lamps are aquamarine glass. There is vitality in the aluminum roof, and although vaulted remains free of any hint of past times or places. The severity of vertical lines intersect the curves of the roof with a bold sharply, trying to convey openness and penetration own radio broadcasts. From the roof, and through side wall lights, wall slabs receive the reflected light to and distributed in a thousand bright angles, referring to broadcasting stations curving their signals in all corners of the earth.

The architect John W. Cross put a major emphasis in this space: “… the design of this first plant was the kind of job in which one unconsciously borrows the wealth of the architectural trends of the past but penetrating in the future, as the imagination can penetrate… ”

The building is fairly conventional from a technical point of view. It is a skyscraper steel structure covered with brick and terra cotta.
The slender octagonal tower General Electric Building rises from the twenty-sixth floor of the building, away from the silhouettes of the adjacent buildings. The unique needle characterizes the skyscraper as one of the most distinctive buildings between the skyscrapers of Manhattan offices.

On a base of red granite it rises three levels, 50 floors covered with terracotta brick orange and variegated shades rise slightly. On the facade of the ground floor, brick combined with large slabs of red marble dotted with numerous ornamental pieces of steel and in some sectors form rounded walls that highlight the manual work done in the period. Above the main entrance, on the outside corner, a clock is located with the famous GE logo on the dial. On the clock a couple of forearms steel protruding from the building. Each hand grasping the end of a piece zigzag object.

The crown of the building is unique. An intricate and elaborate sculpture that is an interweaving of limestone and brick, representing radio waves and surrounds all four sides of the tower.

Inside the lobby, though small for the big piece that rises above it, it contains elaborate masonry, walls covered with pink marble plates, combined with natural color and black marble, mainly in the area of ​​the elevators. These pieces are carved with motifs characteristic art deco and decorated with numerous pieces of aluminum and lamps of the same art deco style. The lobby ceiling is lined with silver metal plates they combine marble floors with granite