The Gasometer are old deposits of gas supplied to the city of Vienna.

After their “restoration and function-change”, they are host to homes, offices, a shopping center, an auditorium and a student residence (Gasometer A – Gasometer B – Gasometer C – Gasometer D).

After closing, all the facilities were dismantled and only the impressive brick facades were retained. The set consists of 4 huge cylindrical buildings constructed in brick.

The particular location of these buildings in an industrial zone as well as the unusual nature of the resulting spaces gave rise to what for years were used as cultural centers for many activities.

Placed under the guardianship of Fine Arts in Austria in 1981 because of its high architectural quality and still protected in 1986, the Gasometer satthrough a long period of neglect, until Wedhorn Manfred, an expert in heritage of Fine Arts, proposed the idea of their possible conversion. Hence the contest convened in 1995, and had winners of Jean Nouvel, Coop Himmelb(l)au, Manfred Wehdorn himself and Wilhelm Holzbauer.

The building is physically located in the industrial zone of Simmering.

The location of the building covers several blocks in Guglgasse street.

It borders the Prater, a huge recreation area and one of the many green areas in Vienna.

Overall, the project has been conceived as a sort of self-sufficient microcosm.

With the combination of the offices and residences it is intended to generate new ways of living and working in a single area.

The project emphasizes the skill with which it have resolved the restoration of the old deposits and the surprise of creating the new building in sharply innovative ways. The group is a prodigious merger between past and future.

The spectacle of it, the creation of new housing,commercial areas of recreation and culture, and regeneration of the industrial district turned the Gasometer into the alternative urban center of Vienna.

Gasometer B is characterized by a continuous hall, a Shopping Mile that contrasts sharply with the regular alternation between straight passages (the outdoor walkways of the Gasometer) and the covered plazas in the interior of the same Gasometer.

The most modern and innovative solutions are the proposals by Jean Nouvel and Coop Himmelb(l)au.

In the case of Nouvel, always extremely attentive to marginal situations and fascinated by the places in continuous evolution, the design was an internal structure characterized by sparkling glass and metal: a continuous game of mirrors, refractions and transparency that allows a glimpse the original structures, in a visual coexistence of old and modern without intermediaries or makeup that emphasizes and summarizes the current and continuing state “under construction” of the European metropolises.

Coop Himmelb(l)au, however, resolves the issue with this controversial and puzzling impact so characteristic of his style: his project, which also includes a large auditorium, choose the deconstructionist line, and creates a sort of bent shield that repeated a portion of the facade.

His project is distinguished by the presence of an indoor garden and ecocompatibility of a stepped structure.

It represents the only case of absence of the inner space, since the central axis of the Gasometer is occupied by elevator facilities; the result is a central block dividing three compact sections, between them divided by as many interior courtyards as the scale of perimeter of the original building.

The Gasometer project consists of the addition of three new volumes: a large cylinder inside the shell, the amazing block of apartments – in the form of screen, right in front of it, and a multifunctional space to hold events of various kinds. The inside of the cylinder and the new building were intended for apartments and offices.

The access, different for visitors and residents, is affected by the street or directly from the subway station. The connection to the rest of the older tanks is produced by the mall and runs entirely along the base of the group.

To illuminate the interior spaces, a courtyard was designed that provides natural light; the apartments of the new construction receive light from balconies with oriented northward. 360 houses are divided into different forms, from small houses with terraces to studios.

Once, retired steel tanks were only steel girders and overlapping beams were all that was inside the ancient steel cylinders.

Concrete rings were added to consolidate the old work of the factory and to establish a connection between the reinforcement pillars of the Gasometer and the new building.

The structure of the new block is made up of a system of concrete pillars which reach full height. Aluminum and glass curtain walls close off the houses, which, thanks to their limited width, enjoy abundant natural light.

The tower is a curved plate fitted at the waist, like a dress.

The structure of the dome is 16 tons of steel and 18 tons of glass, in a combination of 36 steel girders and glass. 5 cranes with arms up to 60 meters long and 82 meters high were used for its construction.

The hoop stress had to be supported by a central tower frame.

Convinación of concrete, glass, mirrors refractile, bricks and metal highlights throughout the building. 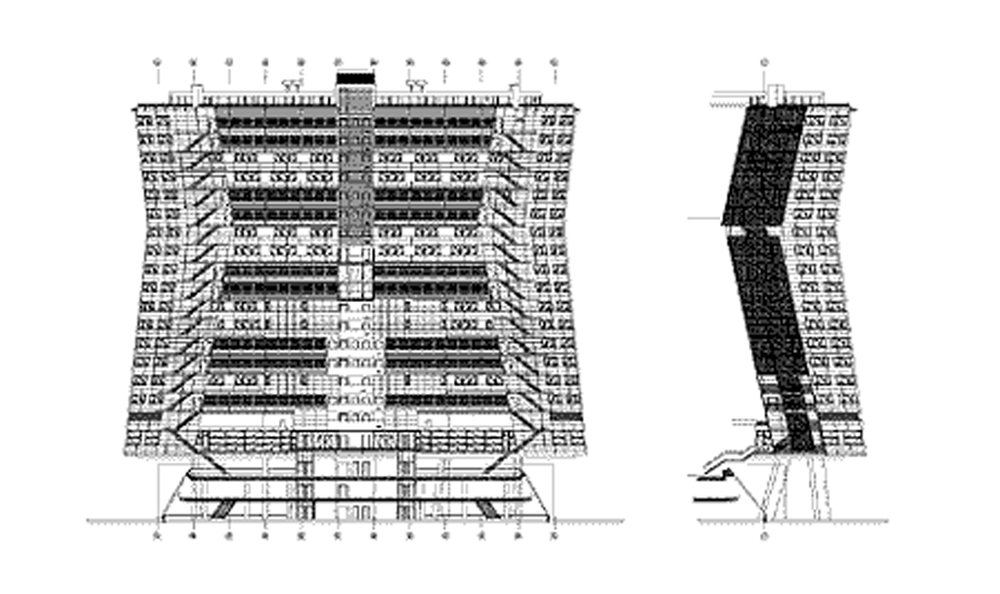 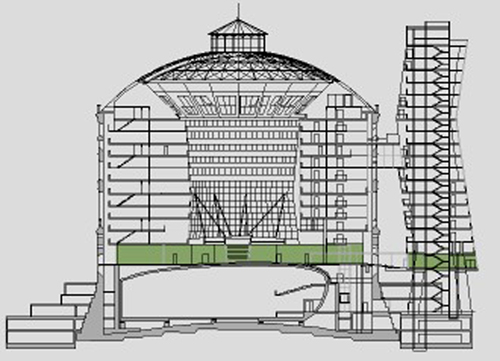 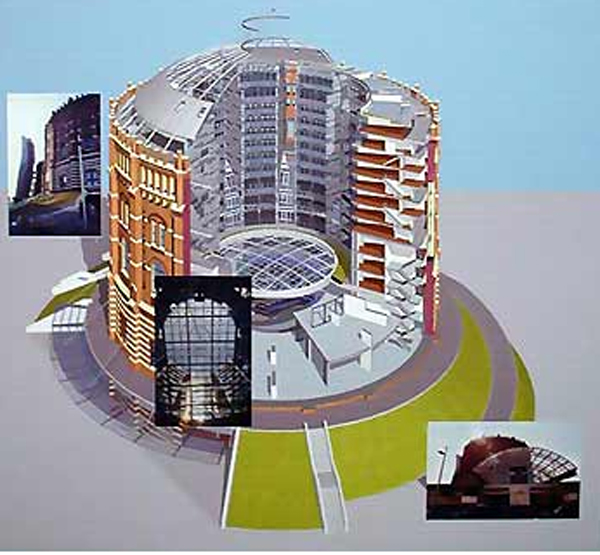 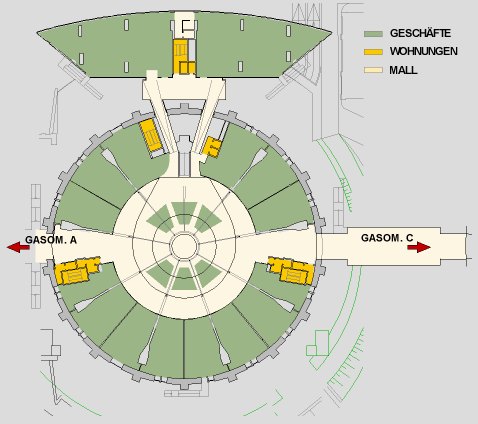 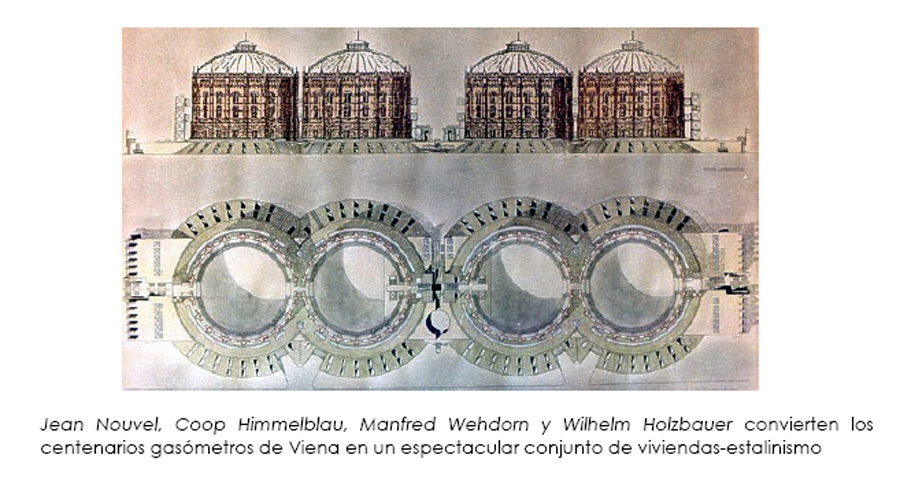 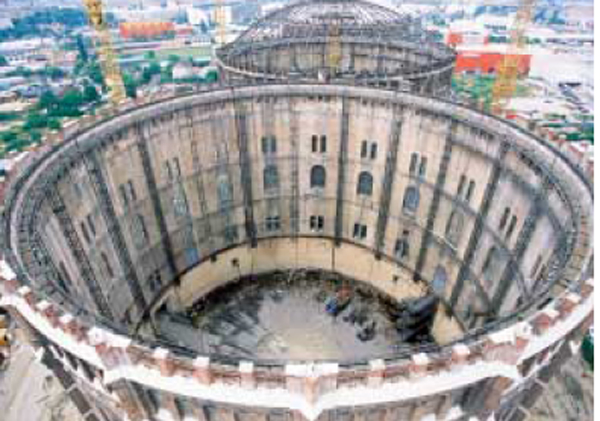 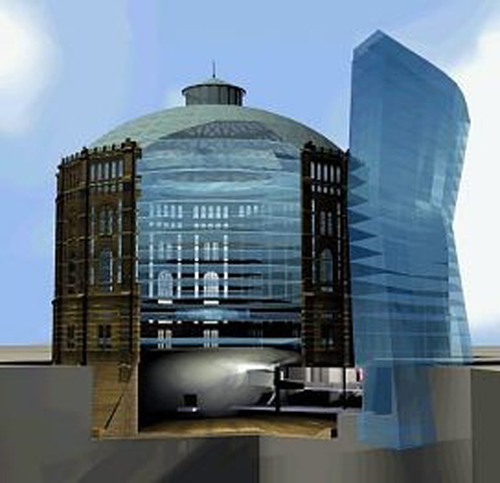 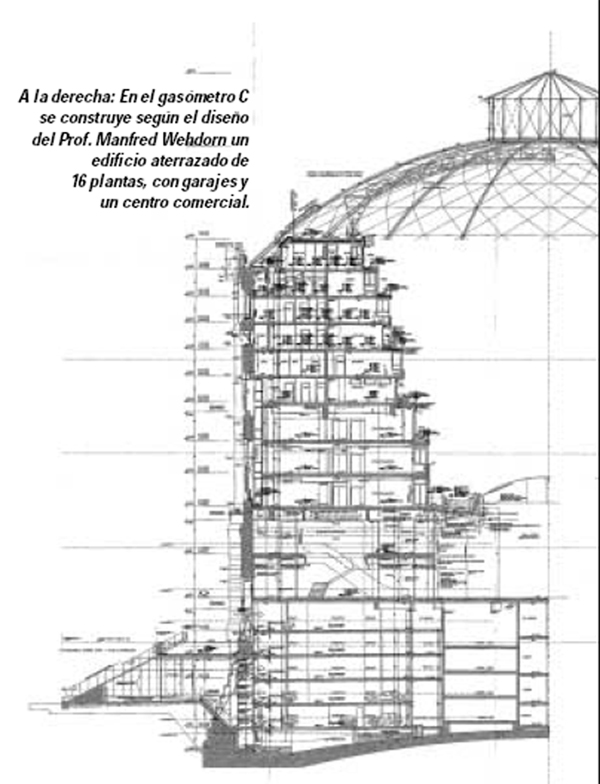 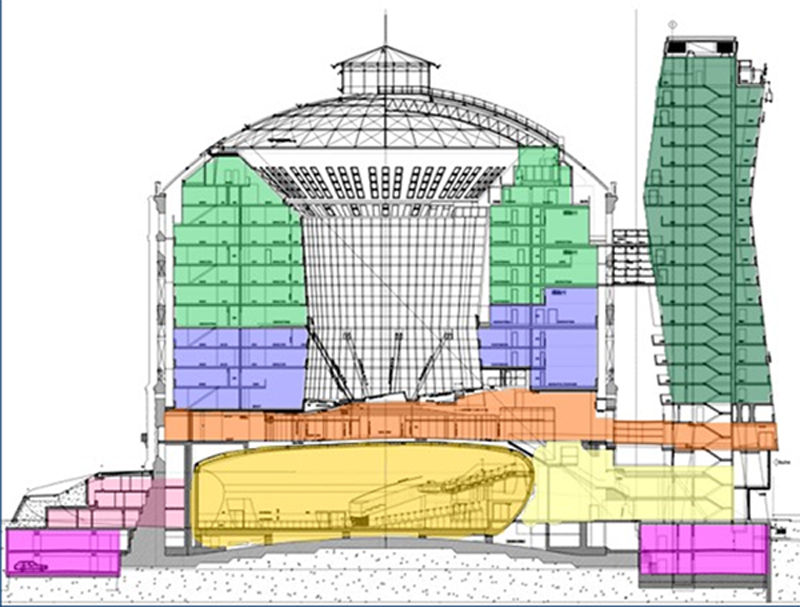 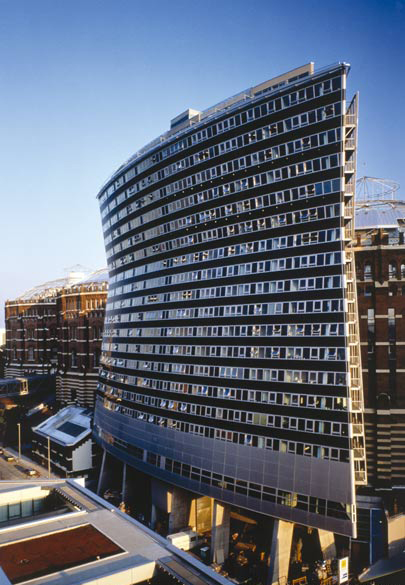 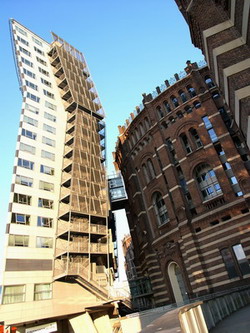 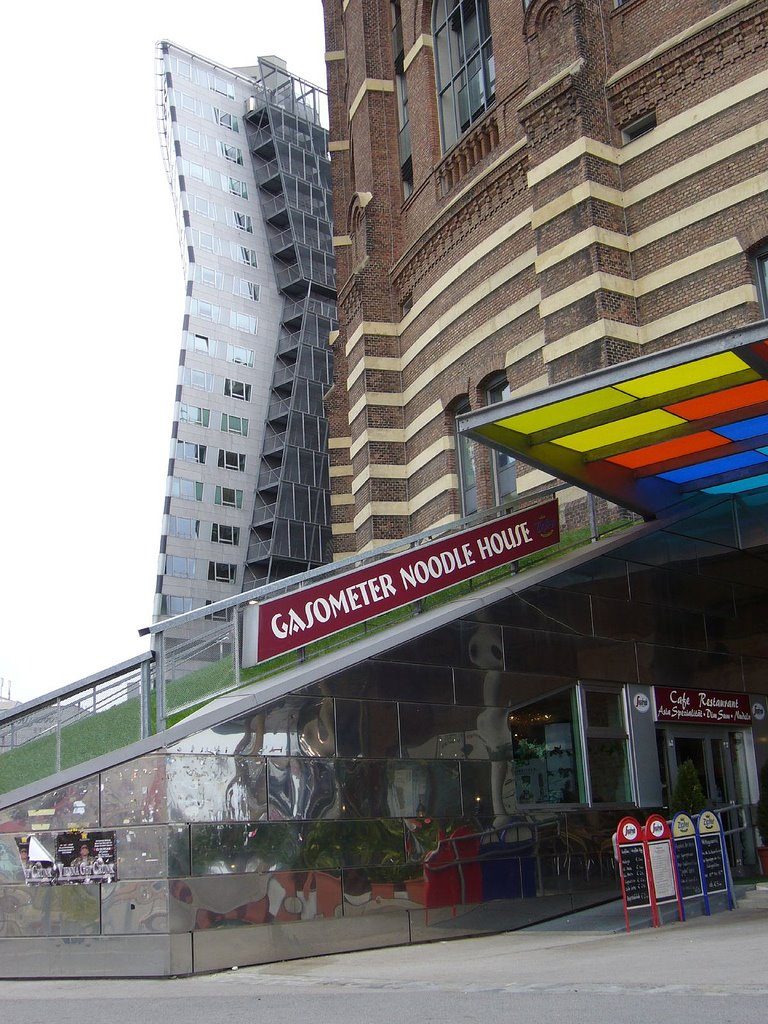 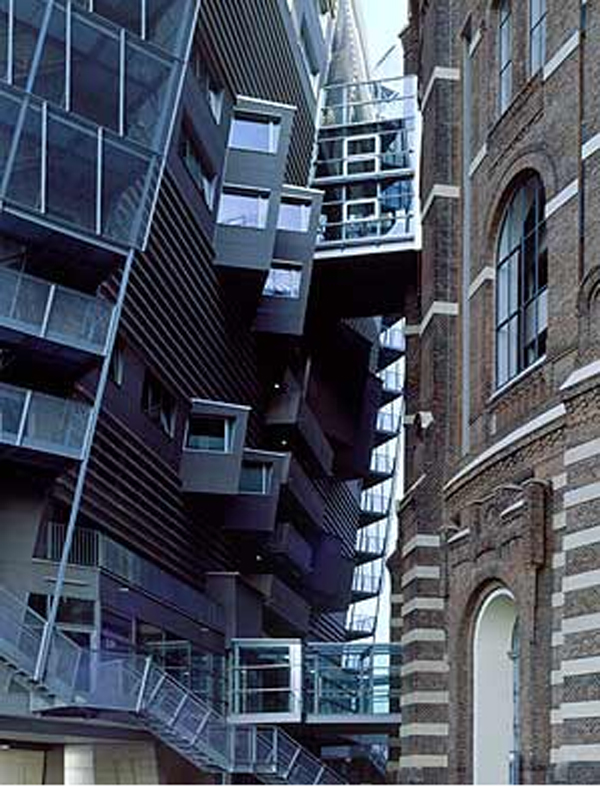 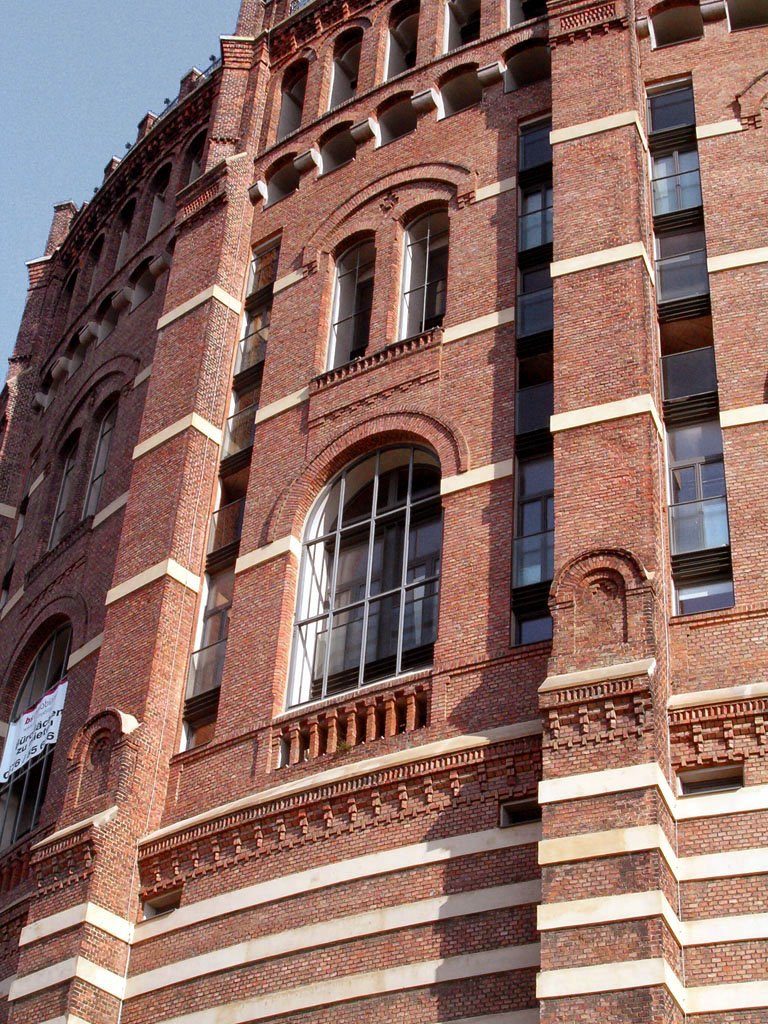 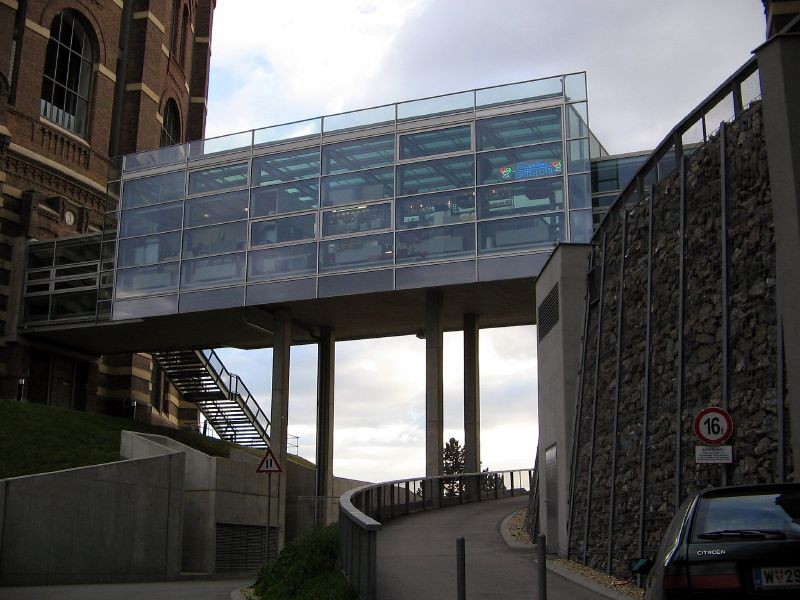 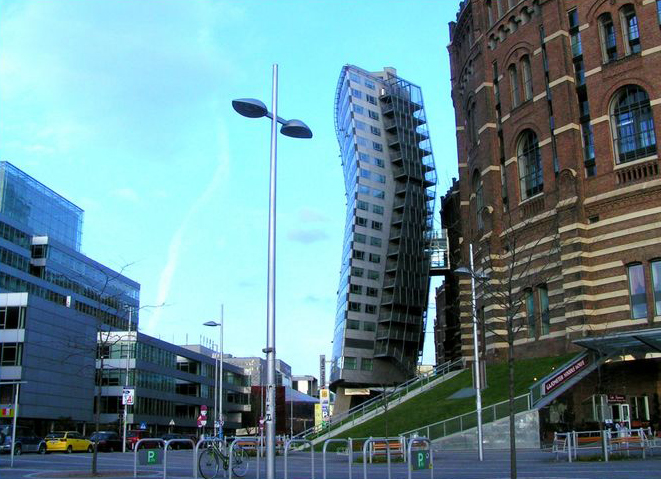 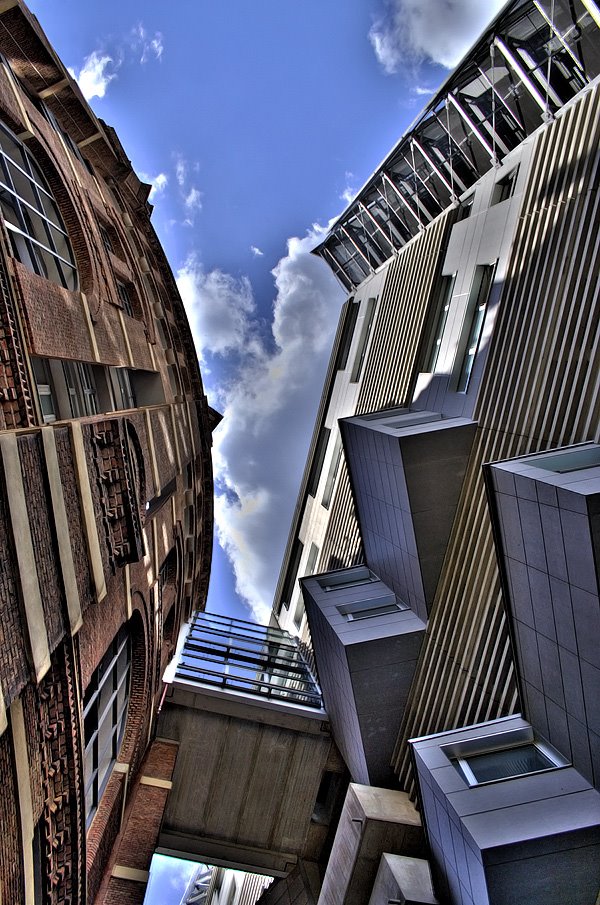 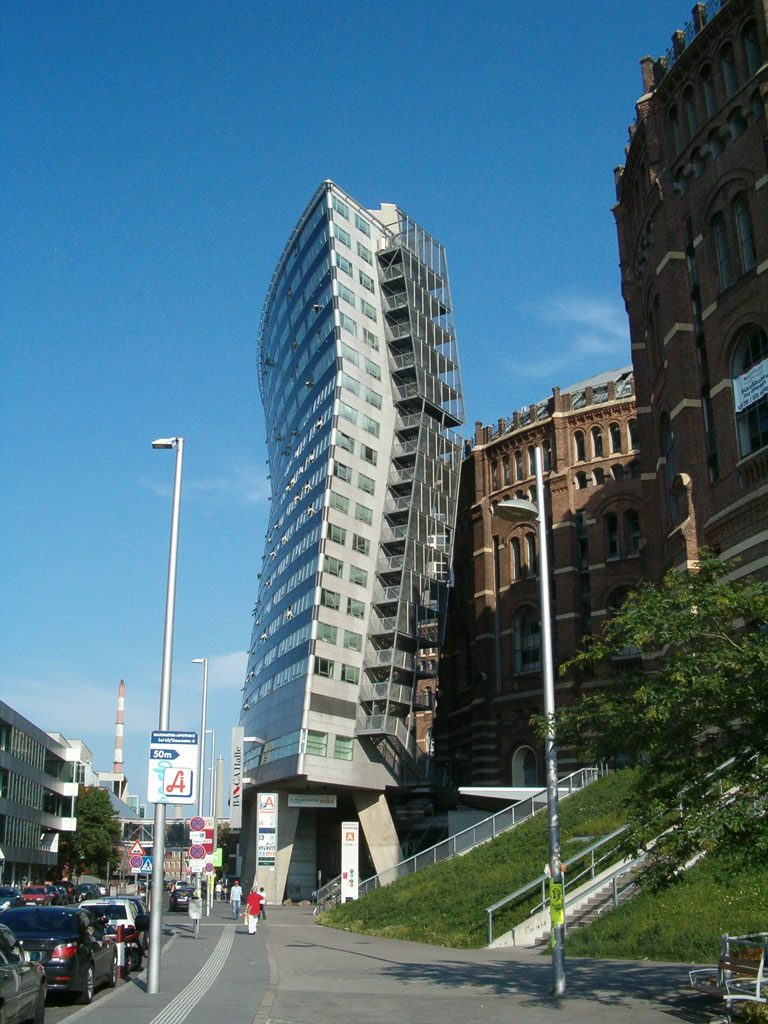 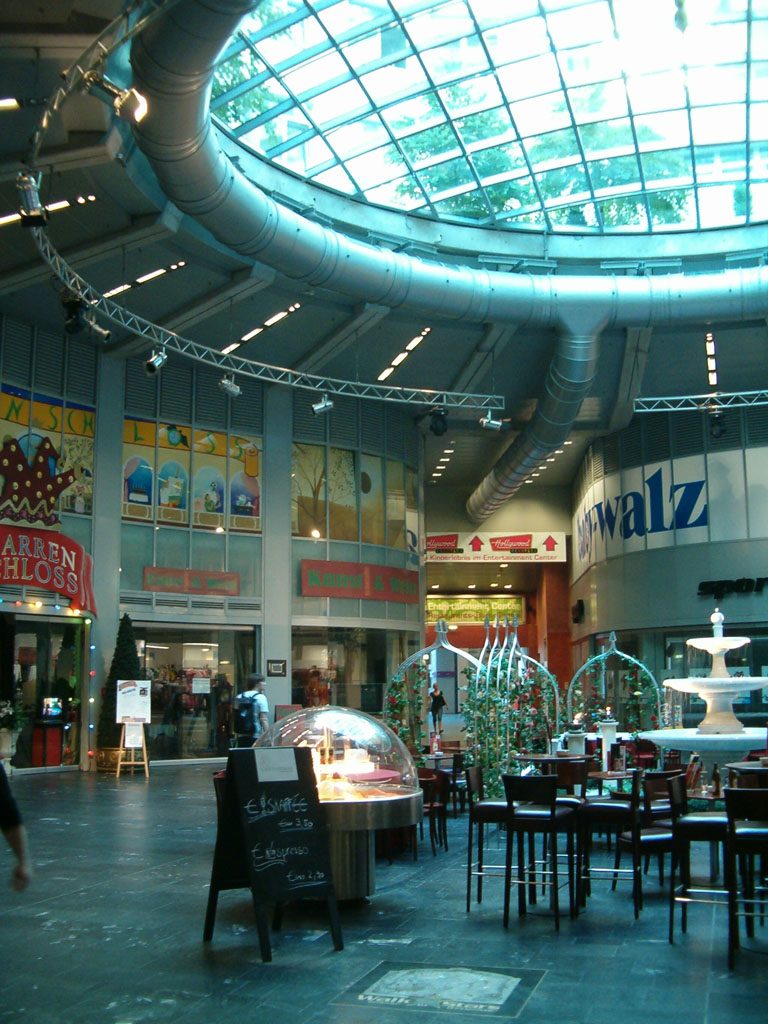 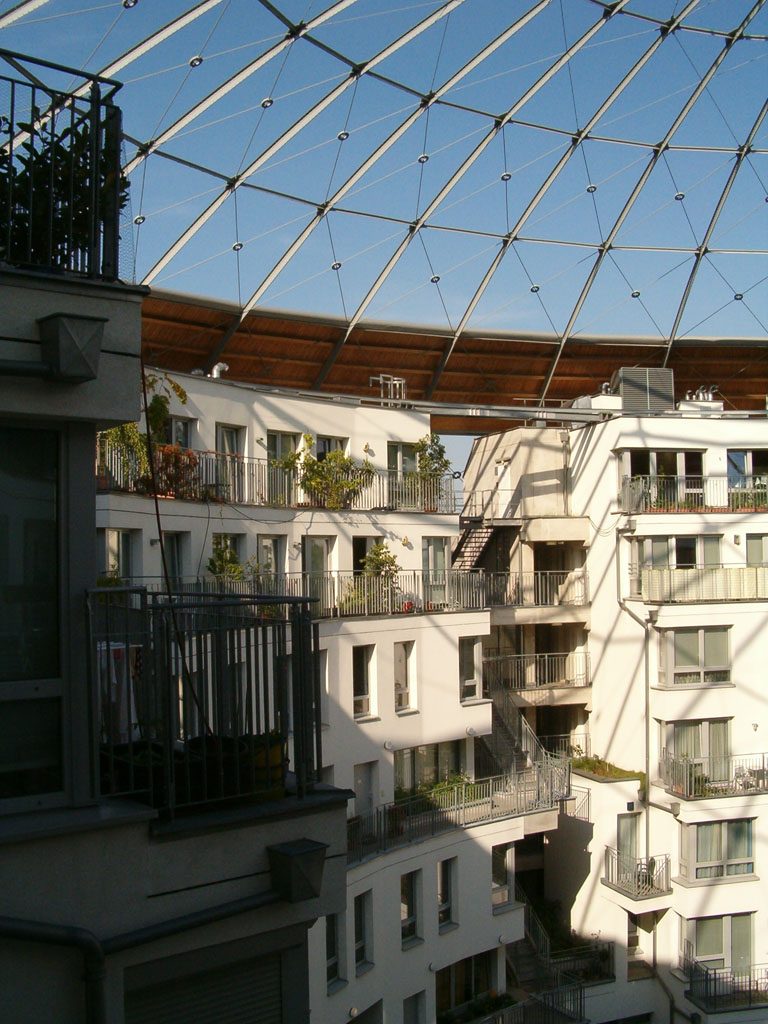 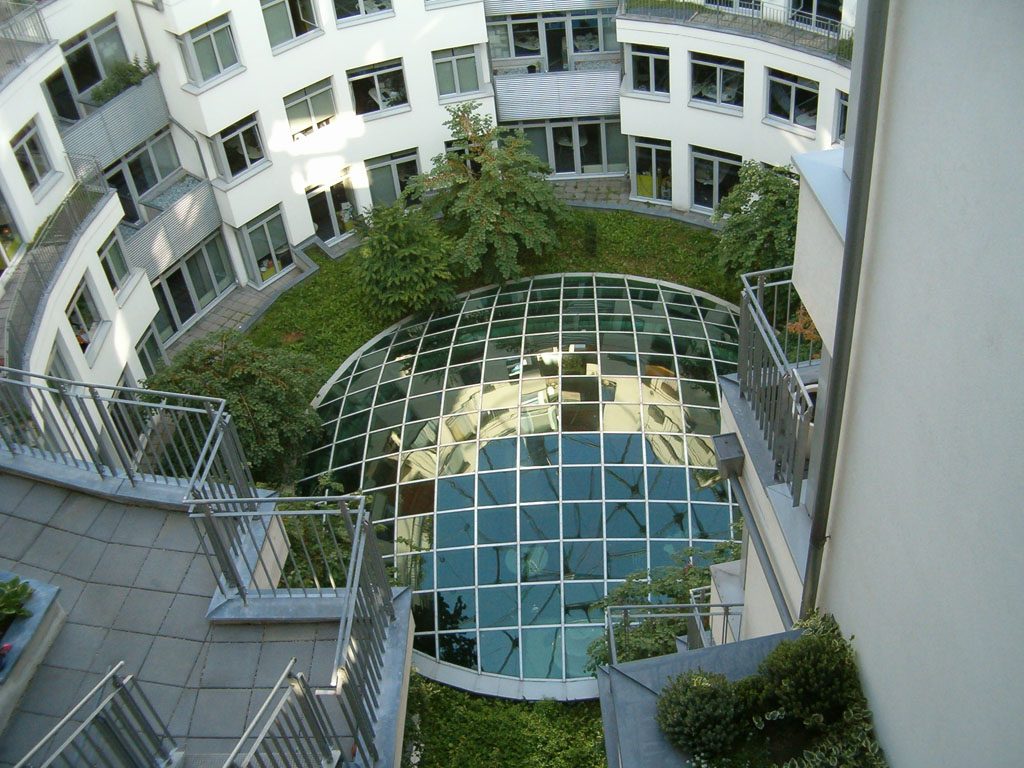 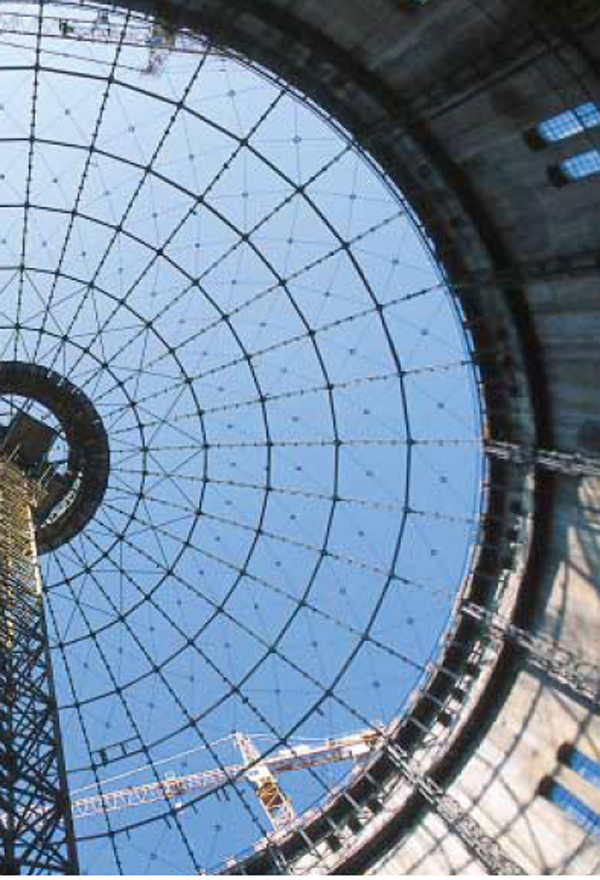 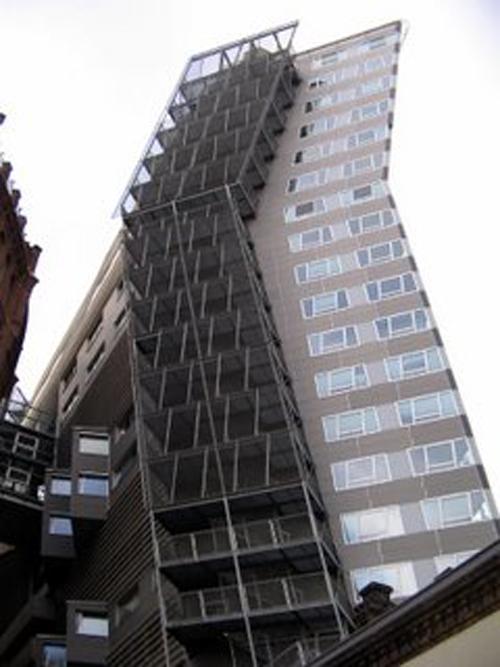