GAES exemplifies the case of a fully integrated industry in the city. This is a high-tech industry.

The headset is extremely sophisticated in recent years, incorporating a custom chip to the auditory characteristics of each user. Production takes place in a white coat and microscope, does not generate waste, it is noisy or require high-volume machines. Thus, making the product lives in the building with the sales department, the administrative, R & D & I, the image, the direction, and so on. They are concentrated in one place, the various stages of value creation chain, from research to manufacture, and that venue will network with five hundred Gaes stores have spread across the planet, closing in Thus, a complete cycle from technology development to customized sales and through the foundation, ultimately, building a social matrix of attention and proximity to the user and cooperation with developing countries in implementing hearing aids to poor people.

Gaes represents a hybrid model of knowledge, production, marketing and cooperation, and in this sense is perfectly adaptable to a dense urban fabric and mixed. The building in Poble Nou Barcelona Gaes has shops on the ground floor, you have neighbors, a newly opened hotel and an apartment block in the early twentieth century, in the street is a school, something beyond, an art museum contemporary Vila Casas Foundation, the parallel street is a boulevard. The workers arrive by public transport and cycling, when they leave the factory are not in an industrial estate on the periphery or in a lifeless downtown, but at the center of town.

Gaes not an isolated case but part of an ambitious process of urban transformation: the technological district 22 @. This area, the old industrial district of Barcelona, the Catalan Manchester, is undergoing a remarkable metamorphosis that visualizes the exchange of a productive model of the nineteenth century to another century. Textile mills, the gas tanks, metal workshops and stores, has given way to companies whose production is based on research and technological development.

Gaes occupied two adjoining buildings, a three-story former warehouse and factory building of five, in a neighborhood’s main arteries, Avenida Pere IV. The expansion of the company over the past decade has coincided with urban bet by a change in the production model of the district.

The street and the volumetric

For its strategic location at the confluence of streets Pere IV and the new axis Llacuna, is considered especially important that the solution has to provide the building this urban corner in which coexist a plaza outside the entrance and the building itself. The volumetry of the project causes a transfer of a vacuum space and ground floor public space that enhances and facilitates the flow. In sum, however, there is a complex volume derived from a few minor creases leading to a terrace on the top floor and finally emphasizing the corner marking the line along the street and consolidated Pere IV.

The conditions and characteristics of a highly sophisticated production, accuracy and proper tech GAES, associated with national and international projection, seeking response from the architecture. Therefore the building to locate the new headquarters of the company expresses a certain emblematic discreet, a formal cogency, clarity and accuracy to be materialized in form and in building materials and arrangement of the facade.
A glass skin connecting the new building with the two existing buildings that are in rehabilitation. The new facade interweaves paradigmatically industry, cleaner production and contemporary integrated management. The image of the new building meets both conceptually and formally sustainability characteristics of the firm and the 22 @ technology district in which it is located.

The facade is an integration of old and new. Define the final image of contemporaneity and accuracy, and serves as the primary ‘device’ sustainable operation, lighting and climate of the building. It consists mostly of a double skin where the appearance is changing. It is a lively facade with slats in motion whose direction varies during the day depending on the position of sun and environmental conditions.

A piston system connected to a home automation weather station and a network of hidden engines actively maintains the facade standing. The formal effect is a vibration that evokes the accuracy of the mechanisms of hearing. This skin ventilated and flexible, with a green color in different intensities, allowing also a full view from the inside but nuanced.

Its operation is similar to the solar clip of prescription eyewear. The concept of solar clip provides an overview and protection simultaneously. The green tint sunscreen ensures about 30% reduction in radiation. The inner skin is separated 70 cm from the primary skin, forming a passable camera for maintenance and cleaning. Here is insulating glass, low emissivity. The facade also combines home automation control, the possibility of manual adjustment of sun protection.

The range of openings moves between two extreme positions: the completely enclosed glass slats, presenting an image of continuous glass or entirely open. The position is nearly closed position for protection against the sun in summer. This position allows constant ventilation, reinforced by the practical opening of the facade on the top, the chimney effect caused by suction. The fully closed position allows, in winter, a heat pad.

The new facade responds not only with all this, the representative will of the building, but allows both optimal energy performance of new building as a significant reduction in energy consumption of existing buildings into four basic points:

The location of the gaps is one of the main strategies of the interior layout. The first of these gaps is a triple height lobby at the corner of the main entrance. A second further vacuum within a envidrado atrium, connecting all floors. This is an area that collects light from the deck through two large skylights invested and carried downstairs by light reflections in the clear glass of varying degrees of transparency and translucency. A skylight shape on the top floor, top management, two patios suspended, as Japanese high courts that create a play of reflections and transparencies between the exterior and interior. This game creates a space of subtle light that illuminates the interior of offices and reaches the ground floor, through the open lobby of the auditorium.

This court is thus a backbone for its central space character, for their ability to bring light and also by the fact of being the place where the elements are placed vertical communication: a panoramic lift and staircase glass main. This central area also will have communications backbone for the other two existing buildings, hence the strategic importance of their position. Vertical Communications (lifts and fire escape) and services form a compact block.

The spatial flexibility is ultimately one of the major projective criteria to allow for adapting the building to potential future scenarios. Although determining the distribution project in detail spaces, interior spaces have a very high degree of flexibility that allows adaptation to different needs. This flexibility is associated with the structural system, a metal structure that easily allows a plant free of pillars and very light, while properly resolved the overhang in the corner. 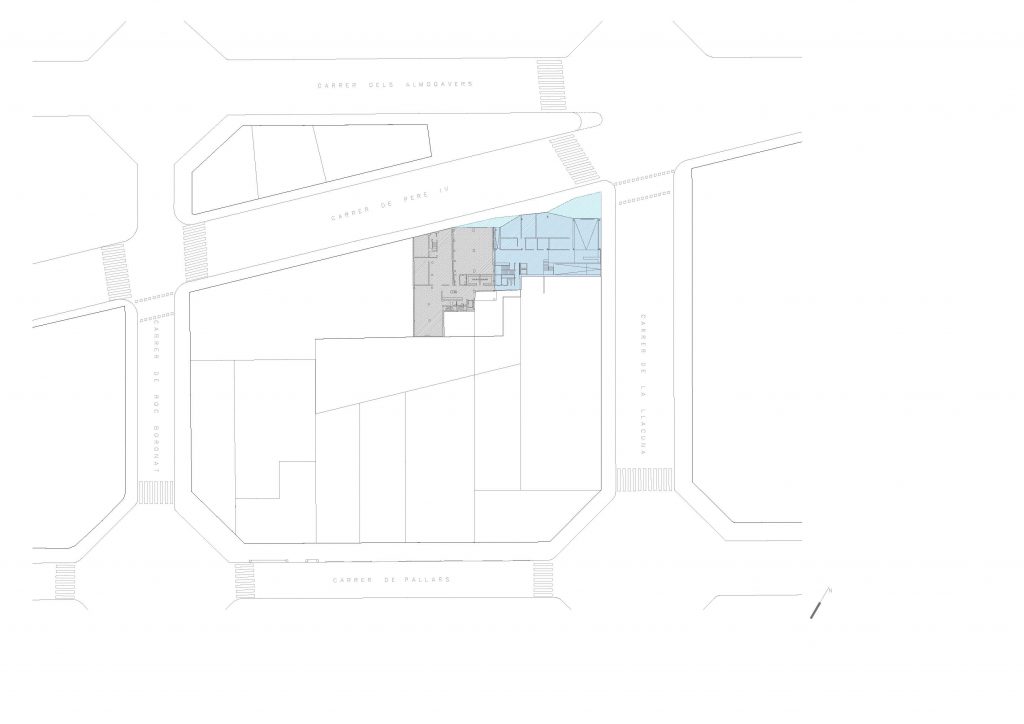 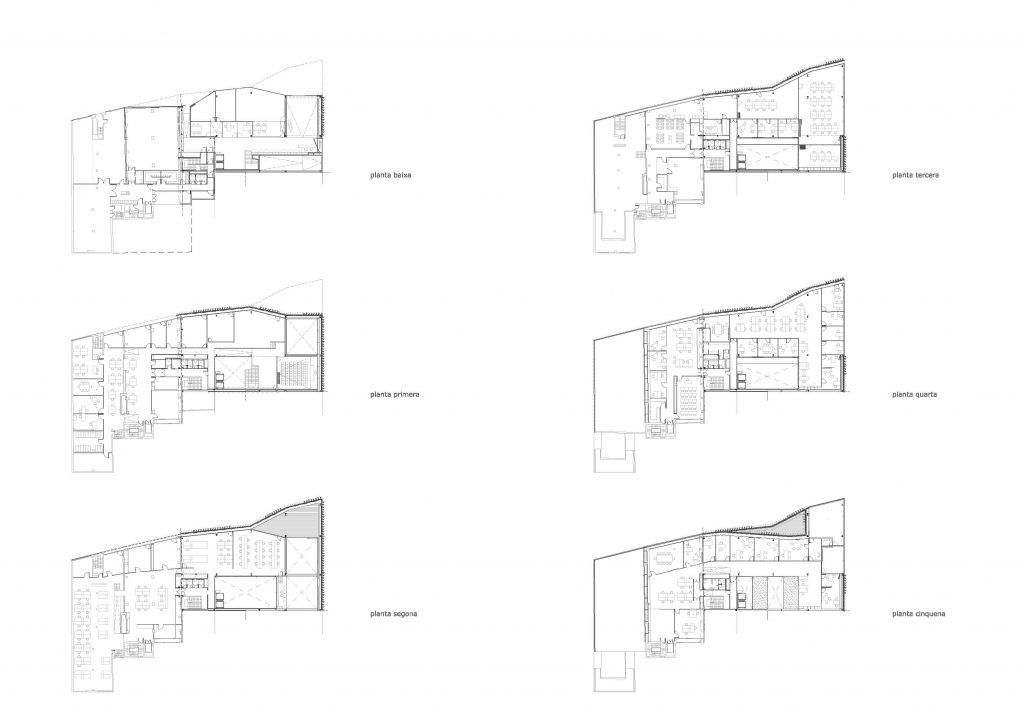 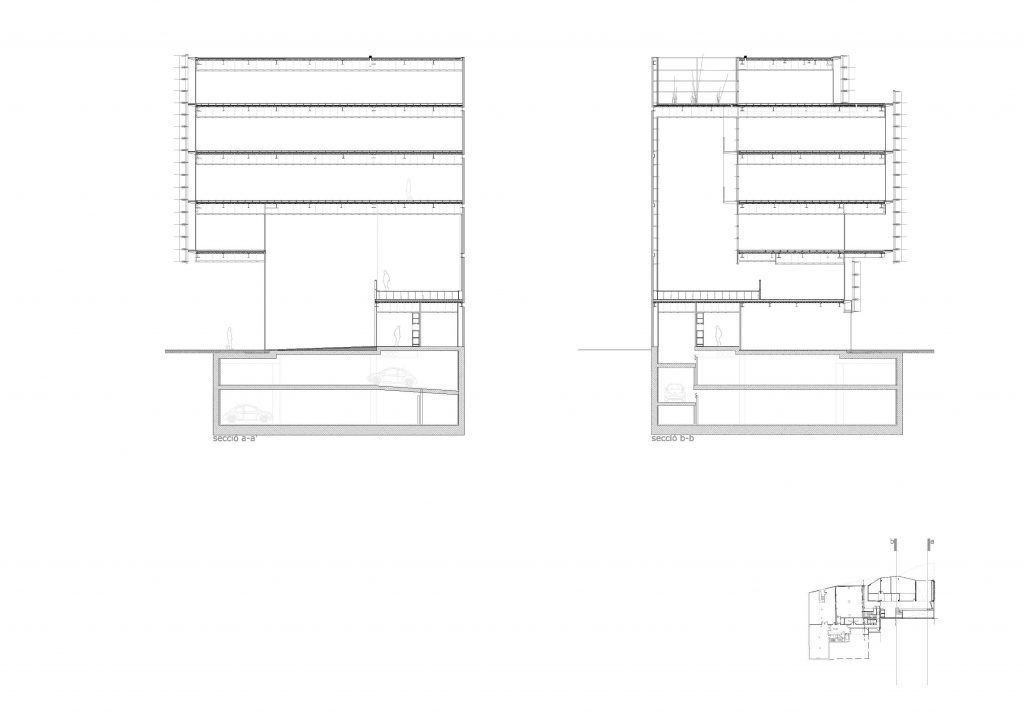 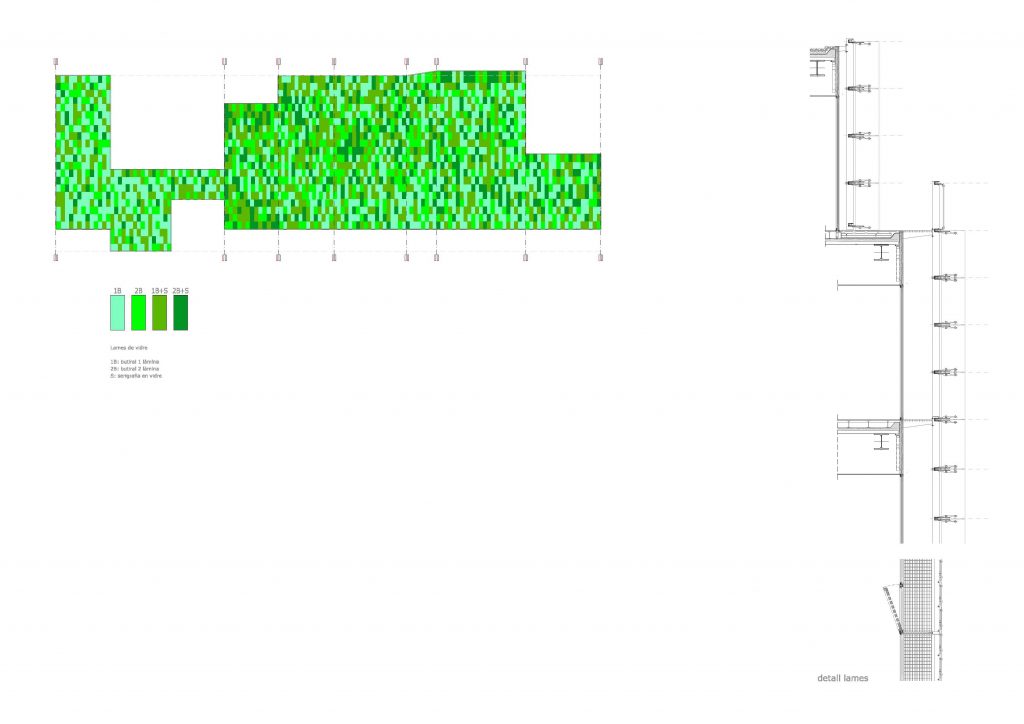 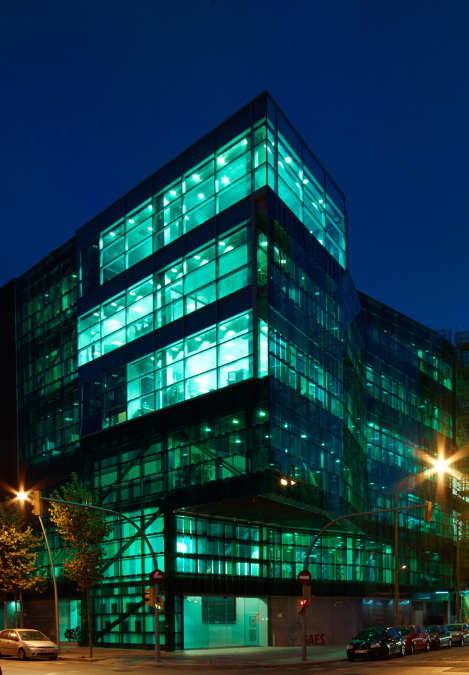 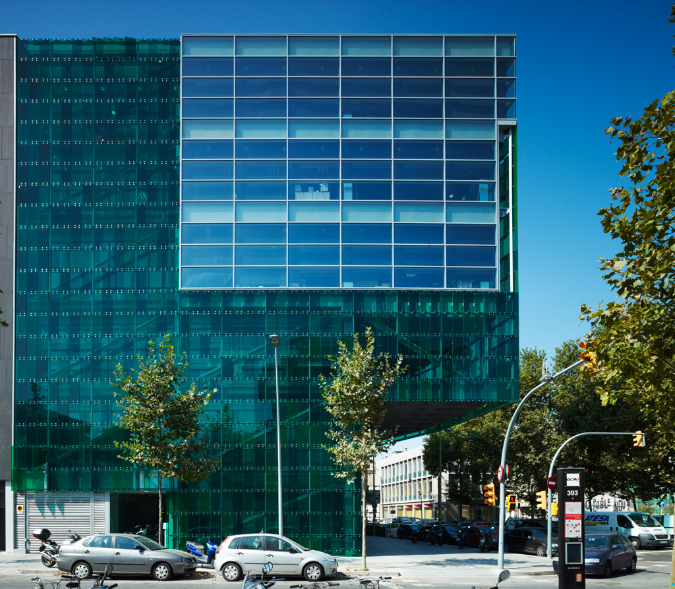 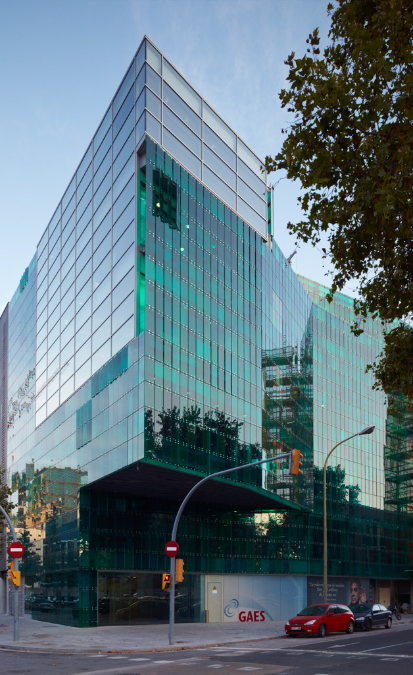 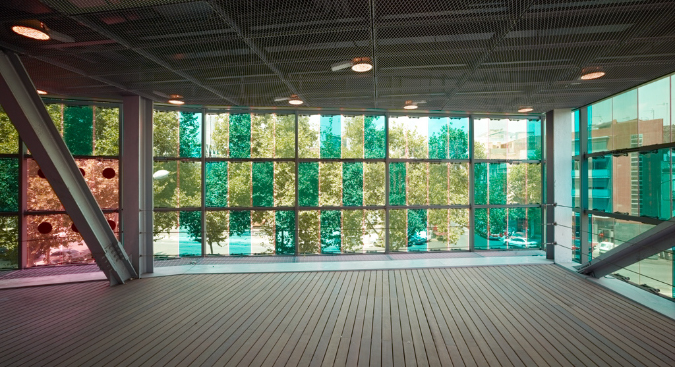 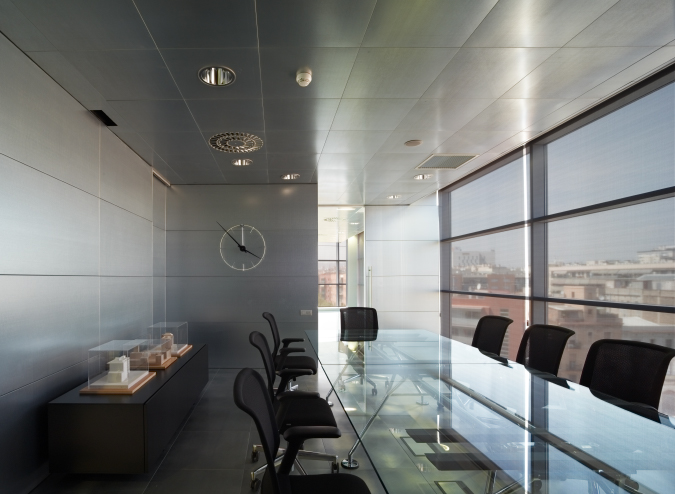 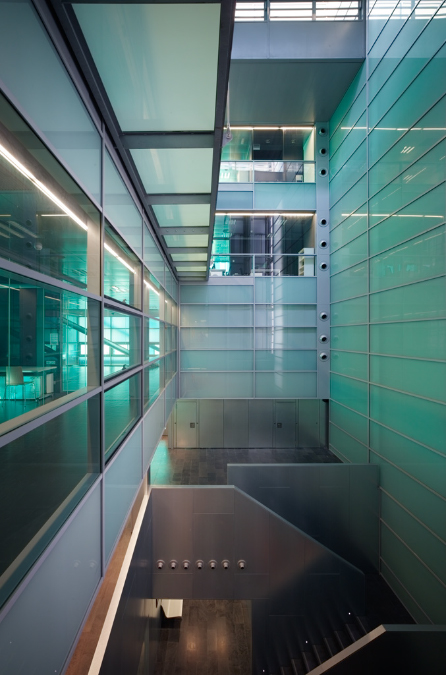 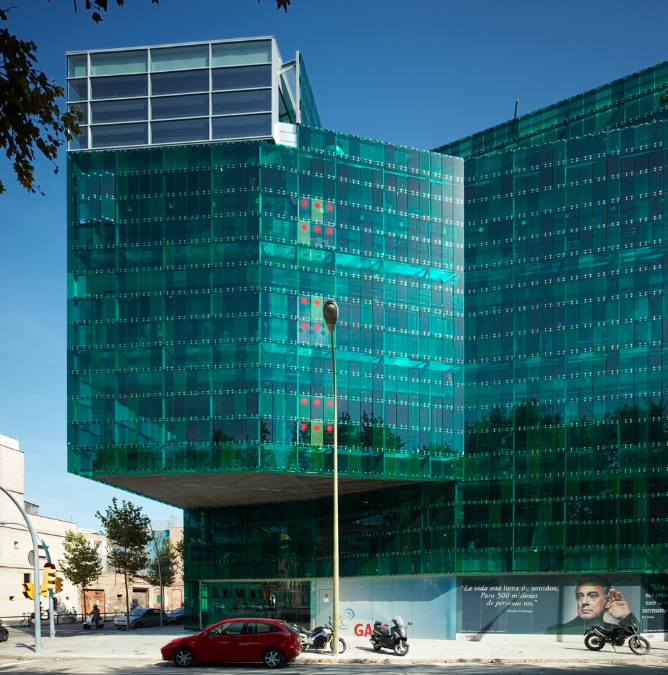 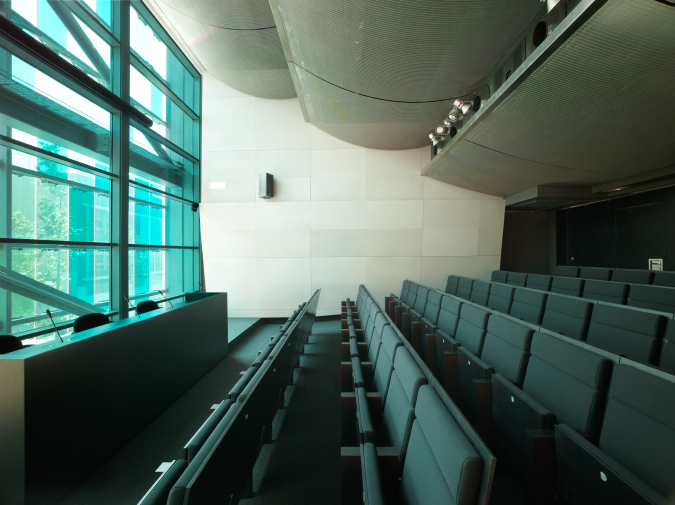